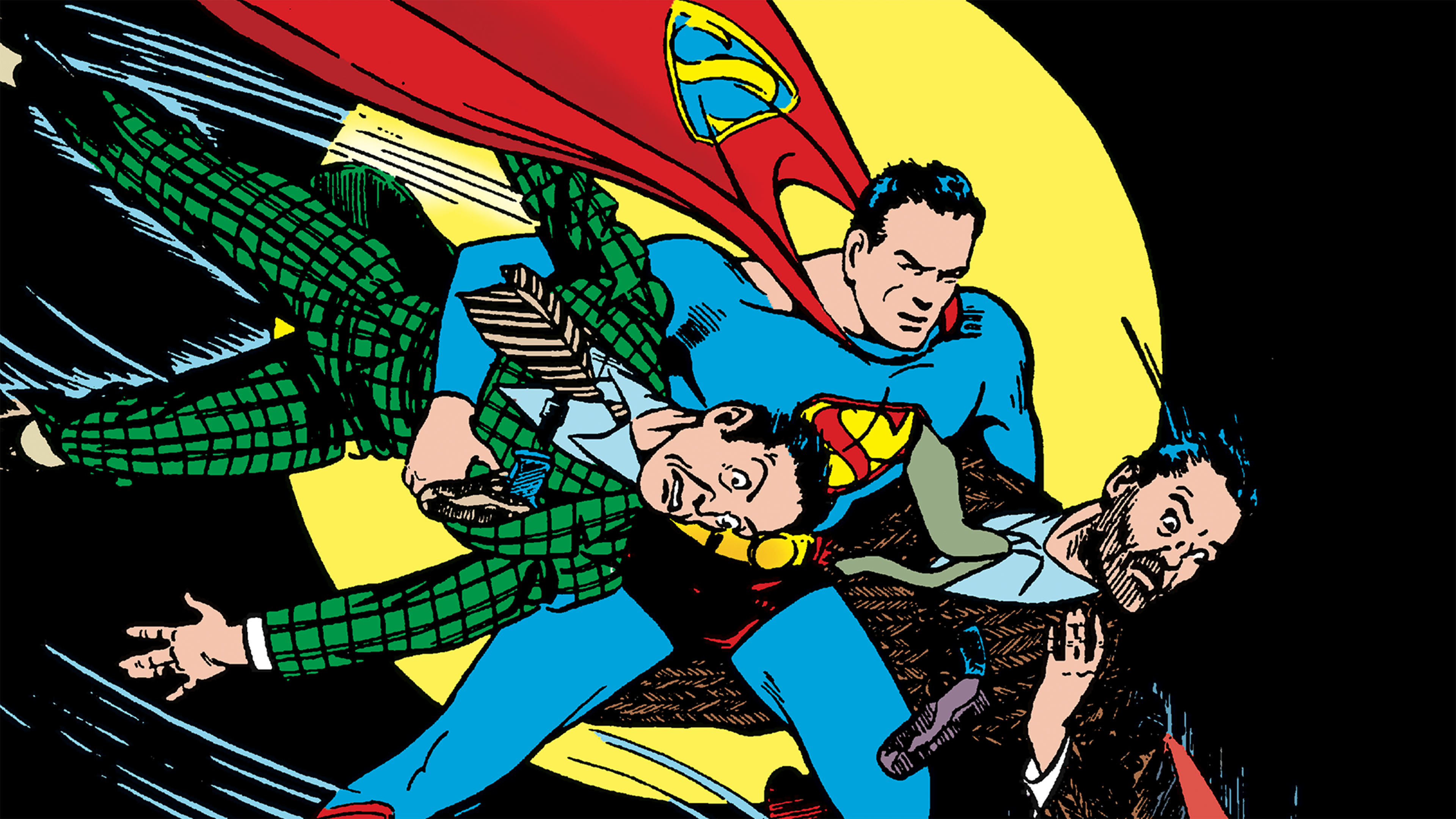 We look at Superman's earliest adventures where he regularly thumbed his nose at the establishment in order to protect the oppressed!

Superman has been known by many names, from the Man of Steel to the Last Son of Krypton. But many people forget about one of his earliest titles -- Champion of the Oppressed. What does it mean to be a Champion of the Oppressed, and how did Superman embody that title? Let’s explore some of Superman’s earliest Golden Age stories, and take a look at his social justice origins.

Today, Superman is often called an establishment superhero. Some of his contemporaries call him a Boy Scout. But this is a far cry from the Man of Steel’s earliest adventures, when he regularly thumbed his nose at the establishment, even if it meant breaking the law. In some ways, Superman could be considered a literal social justice warrior, decades before Oliver Queen started beating his self-righteous drum.

Let’s begin by looking at Superman’s debut in 1938’s Action Comics #1. Within the first few pages he breaks countless laws by breaking into the governor’s mansion, manhandling a butler, and destroying multiple doors. Ultimately this was done in the name of justice, since Superman wanted to get the governor to pardon an innocent woman, who was set to be executed in a matter of minutes. Superman had no qualms about breaking these laws given the circumstances.

Later in this issue, Superman overhears a senator and a corrupt lobbyist discussing a bill that will lead the United States into a war with Europe. Superman kidnaps the lobbyist, threatens his life, and psychologically tortures him by leaping around Washington D.C. with him. Though what the lobbyist and senator were doing was probably considered legal, it was absolutely immoral, and would most likely cost countless lives. Enter the Golden Age Superman -- for whom being a Champion of the Oppressed meant protecting innocents from a corrupt establishment.

The story continues in 1938’s Action Comics #2, when Superman finds out that a weapons manufacturer is pulling the strings, hoping to draw the United States into a war he can profit from. Superman takes the weapons manufacturer and forces him to join the army in a South American war, which scares him so much he swears off building any more weapons. Golden Age Superman didn’t play around.

One of the most famous examples of Superman’s social justice crusade occurred in 1938’s Action Comics #8, when the Man of Steel destroyed an entire neighborhood. The residents were living in degraded conditions, and Superman knew that if he destroyed their buildings the government would be forced to rebuild them into something more livable. This was an illegal act, which resulted in police and military forces being called to stop Superman. Ultimately the Man of Steel succeeded, and a brand-new neighborhood was built for the people in need. Even the police chief recognized that his hands were tied by bureaucracy, and was secretly grateful for Superman’s intervention.

Earlier in the same issue, Superman freed a bunch of juvenile delinquents from police custody, and convinced them to turn their lives around. Once again, his goal was to improve lives and defend the innocent, which meant breaking some laws. Another example of this attitude can be found in 1939’s Action Comics #12 where Superman sets his sights on road safety. In order to teach motorists a lesson about reckless driving, Superman destroys the cars of negligent drivers. The next time Superman chastises Batman for his extreme methods, someone should pull this book out.

More examples can be found throughout the Golden Age. One memorable sequence in 1940’s Superman #6 has the Man of Steel grabbing a bunch of guns, crushing them, and proclaiming that he would like to do this to every weapon in the world. Superman also took his fury out on wife-beaters (Action Comics #1), unsafe labor practices (Action Comics #3), financial fraud (Action Comics #11), and other forms of injustice. In most of these cases, Superman was defending the defenseless, and giving voice to the voiceless, even if it meant operating outside of the law.

Superman was not only a product of his time, but also an extension of his creators. All of these stories were written by Jerry Siegel, and illustrated by Joe Schuster, the creators responsible for Superman. As two working-class boys growing up in Depression-era Cleveland, Siegel and Shuster witnessed many injustices. 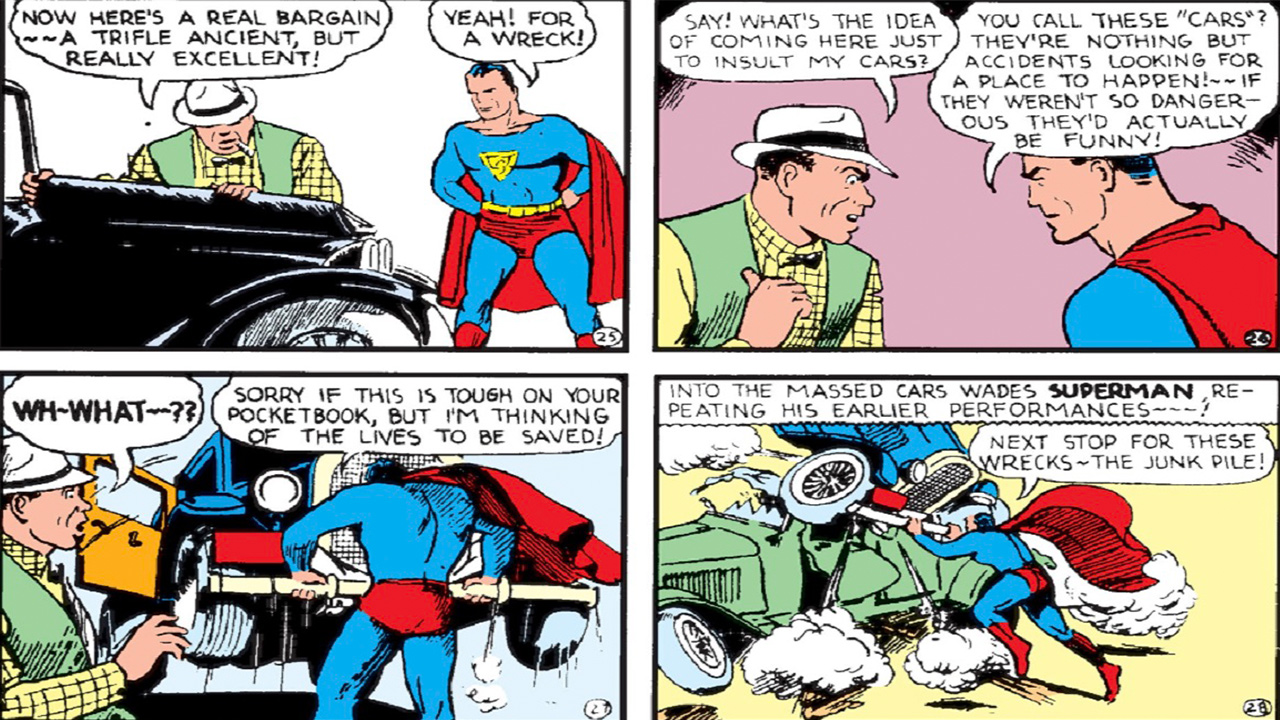 By now some of you might be wondering what happened to this version of Superman. Superman’s ideals and priorities haven’t changed, but the world we live in has, which necessitates changing the way he operates. For example, when Superman meets the scummy businessman version of Lex Luthor in 1986’s The Man of Steel #4, he can’t dispose of him the way he did with the lobbyist in Action Comics #1.

Hypothetically, if Superman did this, there would be consequences for his public image, and ramifications for him legally. Those were minor obstacles in 1938, but much bigger ones in 1986. The best way for Superman to take down Luthor was to do so within the legal system, which he does in Action Comics #700. In a way, Superman’s battle against the corporate CEO version of Luthor can be considered an homage to his Golden Age crusade against a corrupt establishment.

Another reason Superman has changed is because the comic book medium as a whole has canged. By the 1950s and '60s, Superman became more of a science-fiction-oriented character, and it’s hard to tell a social justice message when you’re fighting space dragons or tricking your best friend into marrying a gorilla. As stories and settings grew more fantastical, Superman's down-to-earth roots were largely forgotten.

But in many ways the crusader for social justice never left us. As a reporter, Clark Kent has long used the power of the media as a Champion of the Oppressed. In a world ruled by 24-hour news media, journalists can be more powerful than Superman. Take a look at the Superman: The Animated Series episode “The Late Mr. Kent” where Clark works tirelessly to prove the innocence of a black man condemned to death row. That’s one of the beautiful things about Superman -- he can save the galaxy from Darkseid, then write a news story exposing corrupt slumlords.

Superman’s mission hasn’t changed, only his methods. While it would be entertaining to see him destroy the cars of drunk drivers, or kidnap crooked lobbyists, the Man of Steel has evolved. Working as tirelessly in the world of 2020 as he did in that of 1938.

What's your favorite story about Superman sticking up for the oppressed? Make your case in our Community!