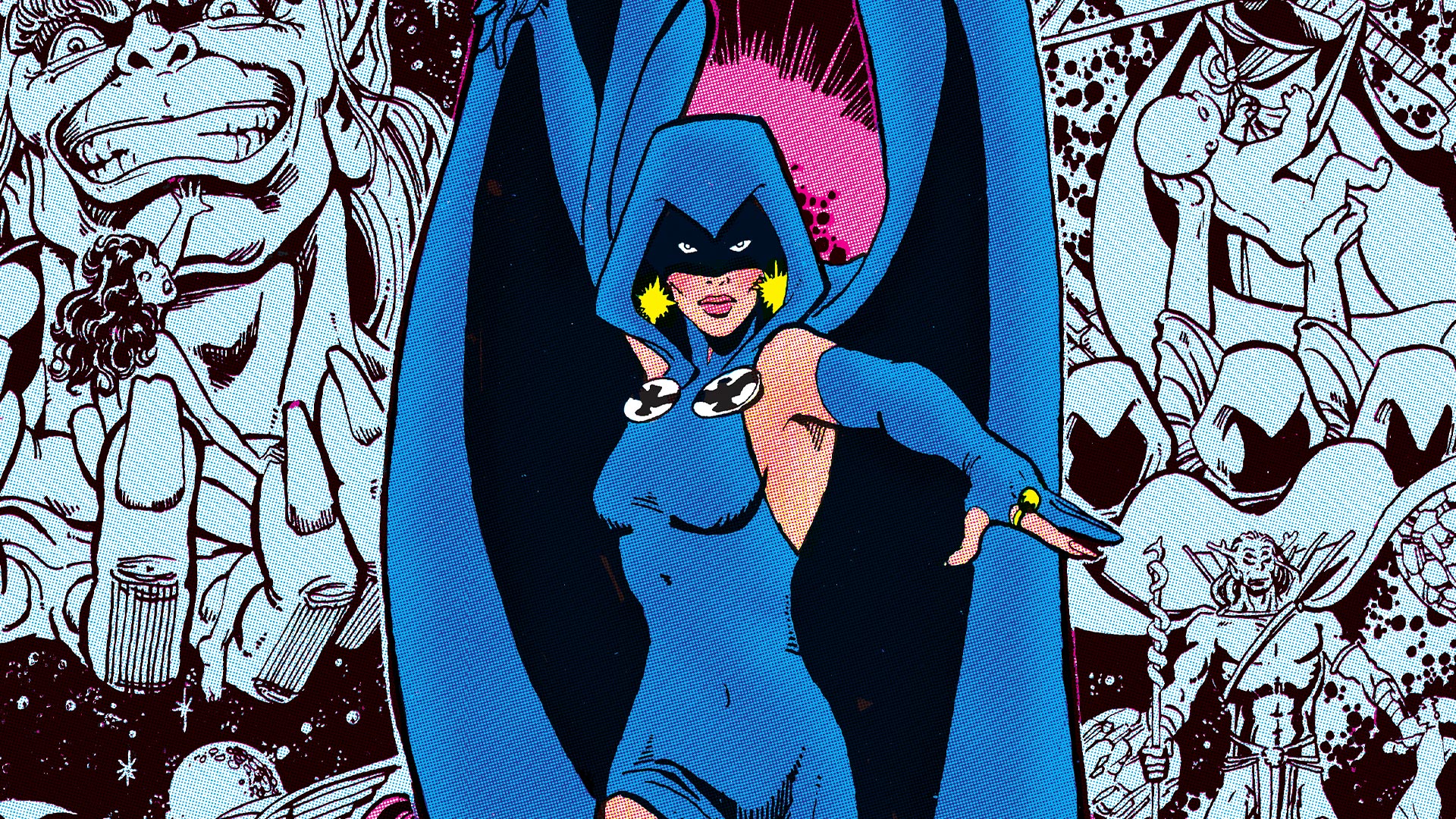 To Celebrate World Goth Day, today we’re looking at one of the most popular members of the Teen Titans, Raven! For forty years, Raven has endured as a force for both good and evil, trapped in a world she never wanted as a vessel for her father Trigon. This has given fans some pretty grim stories to read, and over the years has transformed Raven into an icon of Goth subculture. With her black bird motif, emotionless demeanor, and usually dark clothing, it’s easy to see how Raven has attracted a certain subset of fans. Let’s check out five key stories starring Raven... 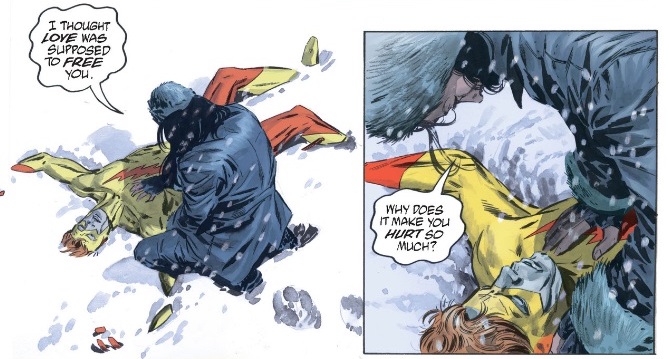 First appearing in The New Teen Titans #1, Raven assembled members of the original Teen Titans to assist her in the coming conflict against her father Trigon. At the time, Wally West a.k.a. Kid Flash was retired and attending college fulltime. Raven manipulated his feelings, forcing him to fall in love with her. We don’t immediately see this happen in the first issue, but years later in Legends of the DC Universe #18, we’re shown how the drama unfolded. In turmoil over the overwhelming emotions of the populace, Raven was drawn to Wally, whose girlfriend had recently left him for his best friend. Racing out into the artic to escape his pain, Wally is found by Raven, who tempers his anguish and works through her own pain with him. Although she wipes his memories in order to assemble the Teen Titans the next day, this was the spark that lit the torch Wally held for Raven for several months, leading him to doubt both his life as a hero and their relationship. 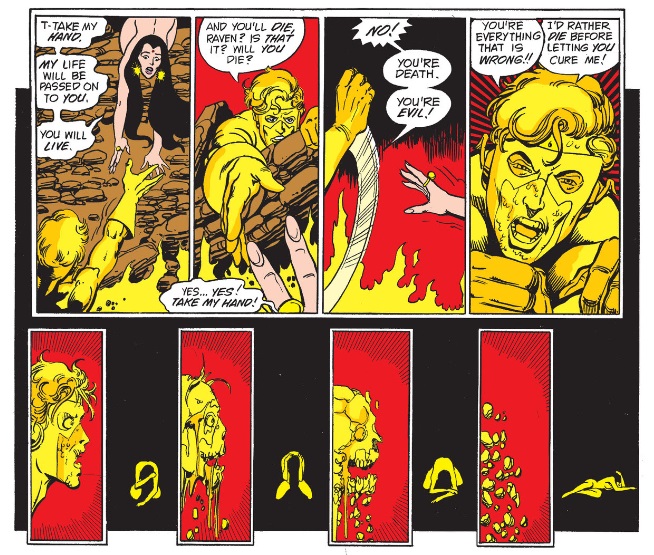 In this issue, Raven is captured by the Brotherhood of Evil, who seek to learn the secrets of Brother Blood. One of the members, Phobia, tortures her by pushing on her innermost fear -- the death of her friends and the entire world by releasing Trigon. Raven cooperates to protect her friends, but when the Titans arrive to rescue her, it appears they’ve been killed by the Brotherhood, Raven goes berserk. She attempts to destroy everything in her path, including herself, and is only stopped by the timely intervention of Wonder Girl. While the day was saved, Raven’s friends were freaked out by their teammate’s demonic outburst, separating her from those closest to her. 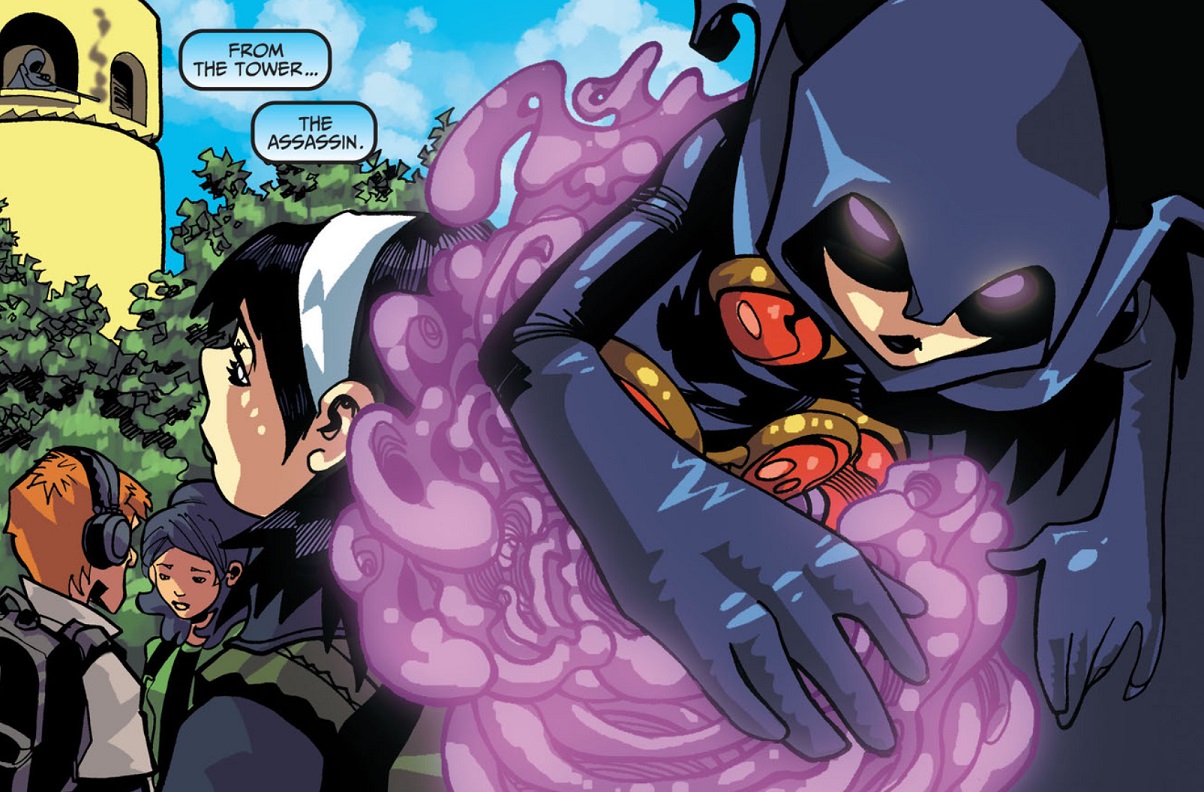 When Raven returned in the pages of the 2003 Teen Titans series, her soul landed in the body of a young teenager. Now named Rachel Roth, Raven moved to California to attend Strages Academy. On the first day of school, however, she received a premonition that one of her classmates would be killed by a sniper. Throughout this miniseries, Raven makes friends and observes the dynamic of the students and the faculty, who all live under the bureaucratic machinations of one of the students’ scientist father; whose connections run a long shadow over the school. Raven discovers the scientist’s comatose daughter has been negatively influencing the emotions of the town through the power of Psycho-Pirate’s Medusa Mask. On her own, with no backup from the Titans, Raven defeats the powers of the mask and gains both a sense of independence and normalcy, having made new friends that weren’t a part of her superhero life. 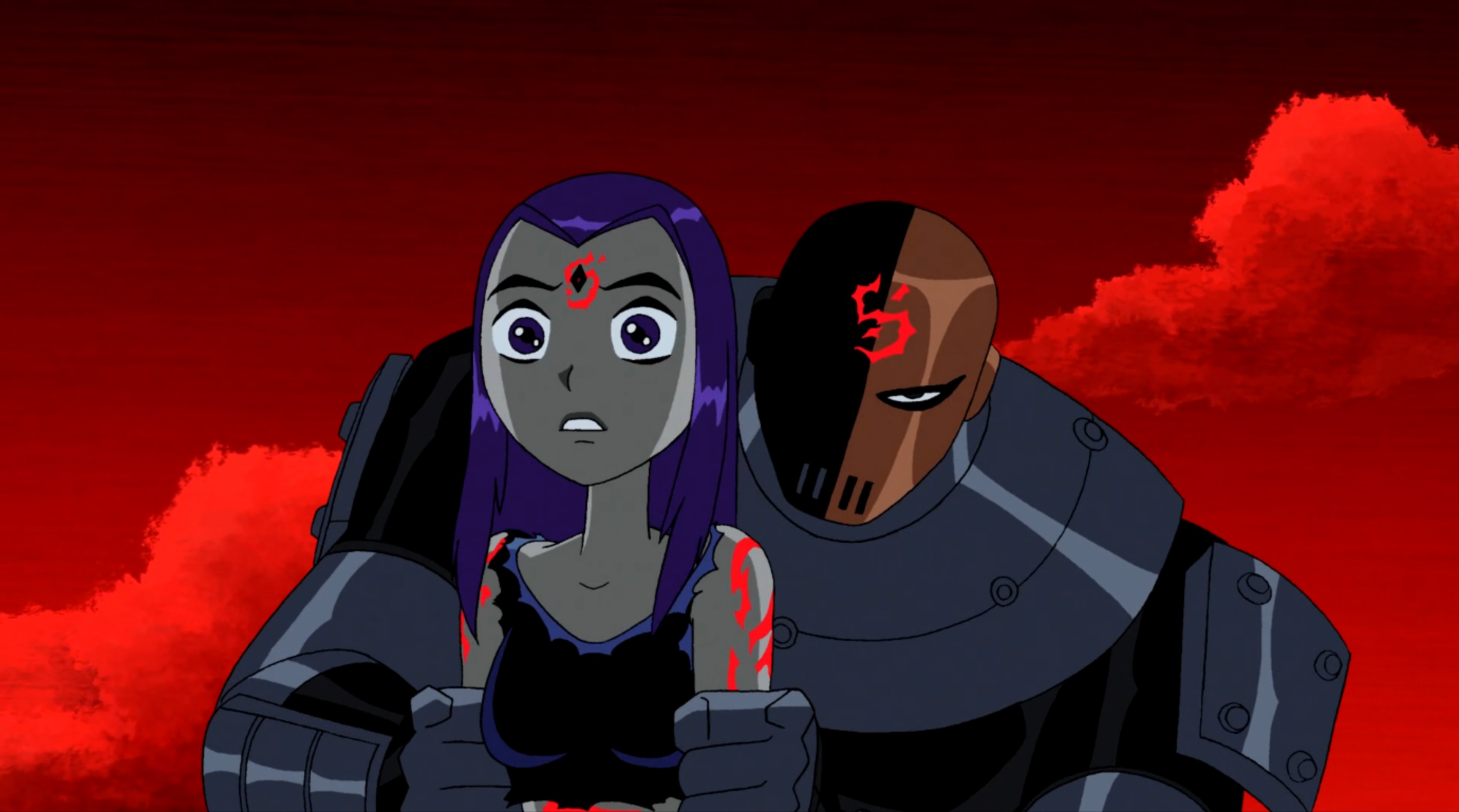 Each season of the 2003 Teen Titans series featured a different member of the team, and season four was Raven’s time to shine. In “Birthmark,” it’s her birthday but the Titans are confused at Raven’s resistance to celebrate. When Slade returns from the dead with new demonic superpowers, Raven understands how she cannot ignore the inevitable. Both she and the Titans are powerless to stop Slade, who upon touching Raven reveals to her fiery tattoos symbolizing that Trigon is returning. Though Raven’s strong enough enough to save her friends from Slade’s wrath, she despairs over the oncoming crisis, which plays over the course of the season -- ending in the three-part season finale adapting the classic "Terror of Trigon" storyline from the comics. 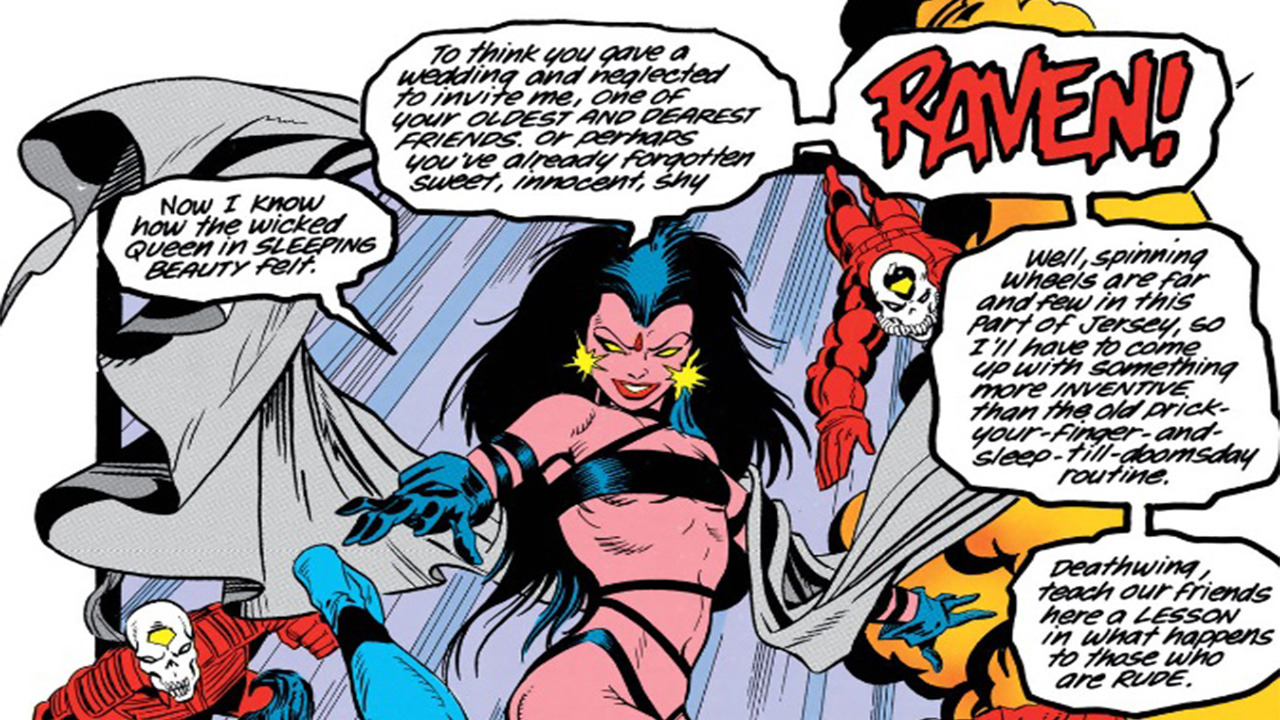 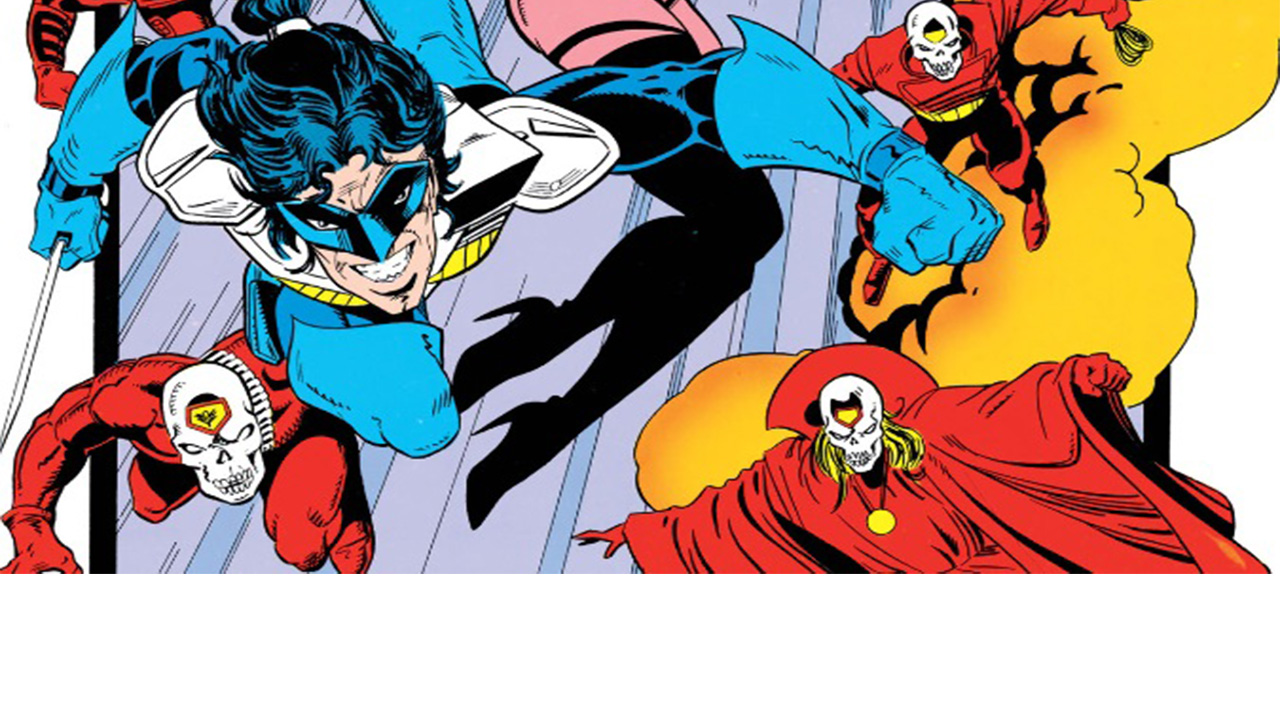 New Titans #100 was meant to be a celebration, not just of the long-running title but the marriage of Dick Grayson and Koriand’r. But just as the priest was about to announce them husband and wife, he was blown to bits as a corrupt Raven and her acolytes descended upon her friends and attacked. Thought dead months ago during the "Titans Hunt" storyline, Raven was absorbed completely by Trigon and turned against her comrades in another bid to rule the universe. Not content with merely interrupting her friends’ wedding, she assaults Starfire in front of the entire congregation, leaving Kory in a catatonic state for the next several months. In the aftermath, the Titans team is split. It would be months before a new team, led by Arsenal, assembled to take her down.

Got a favorite Raven story not mentioned in this article? Let us know in our Community!