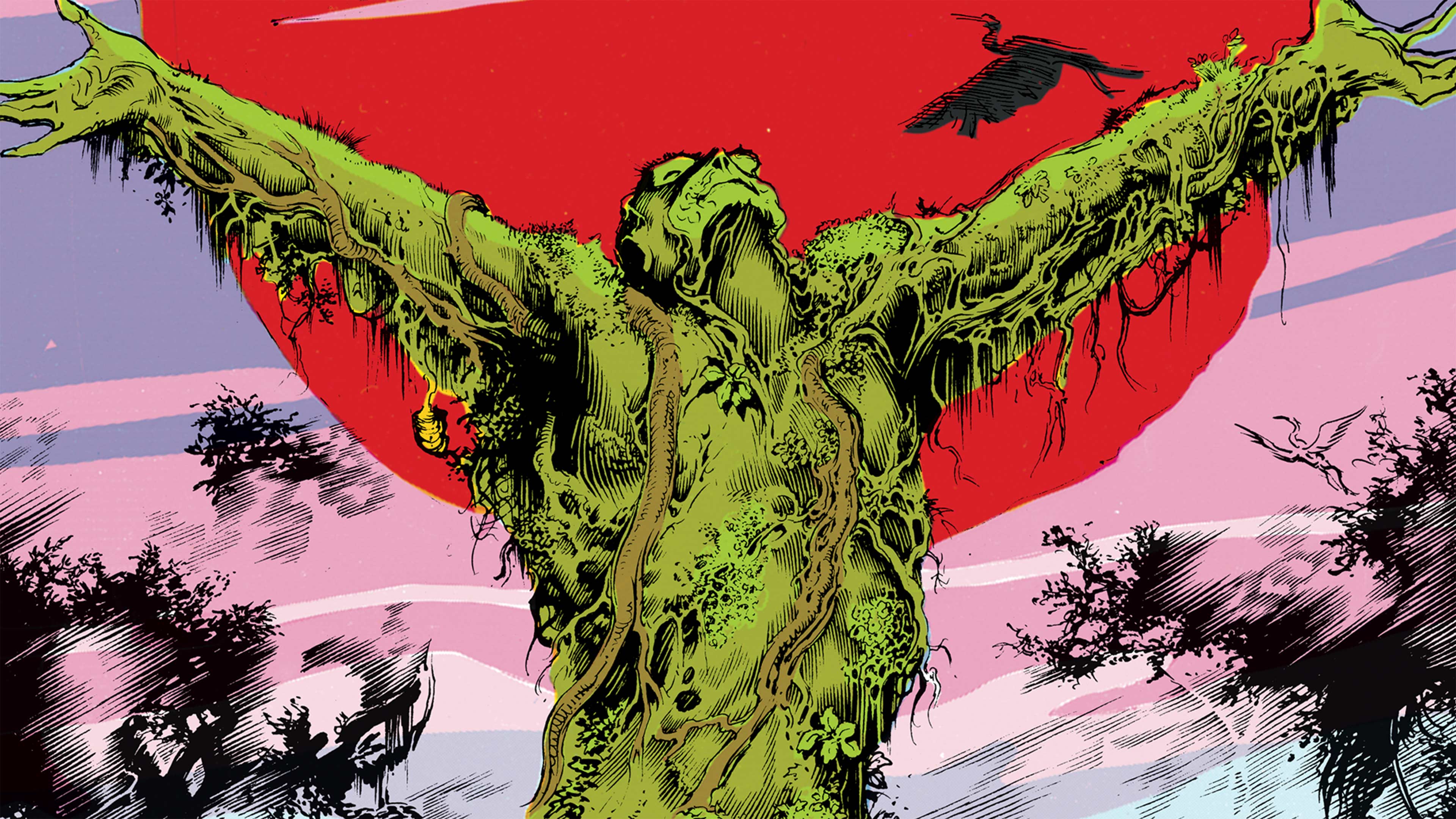 Celebrate 4/20 with These 5 Trippy DC Comics

Are you looking to expand your mind and overwhelm your senses? We’re four months into the year 2020, and while life might look a little dull right now, DC Universe has plenty of comics to add color to your world. You can weed through our library looking for something appropriately trippy, but let’s be blunt, that could take a while. Since we’re all buds here, we’ve put together a list of trippy comics that will brighten up the 20th day of the month, al of which are available to read on DC Universe. Since 20 divided by 4 is 5, here are 5 psychedelic stories to brighten up your day...

I YAM WHAT I YAM 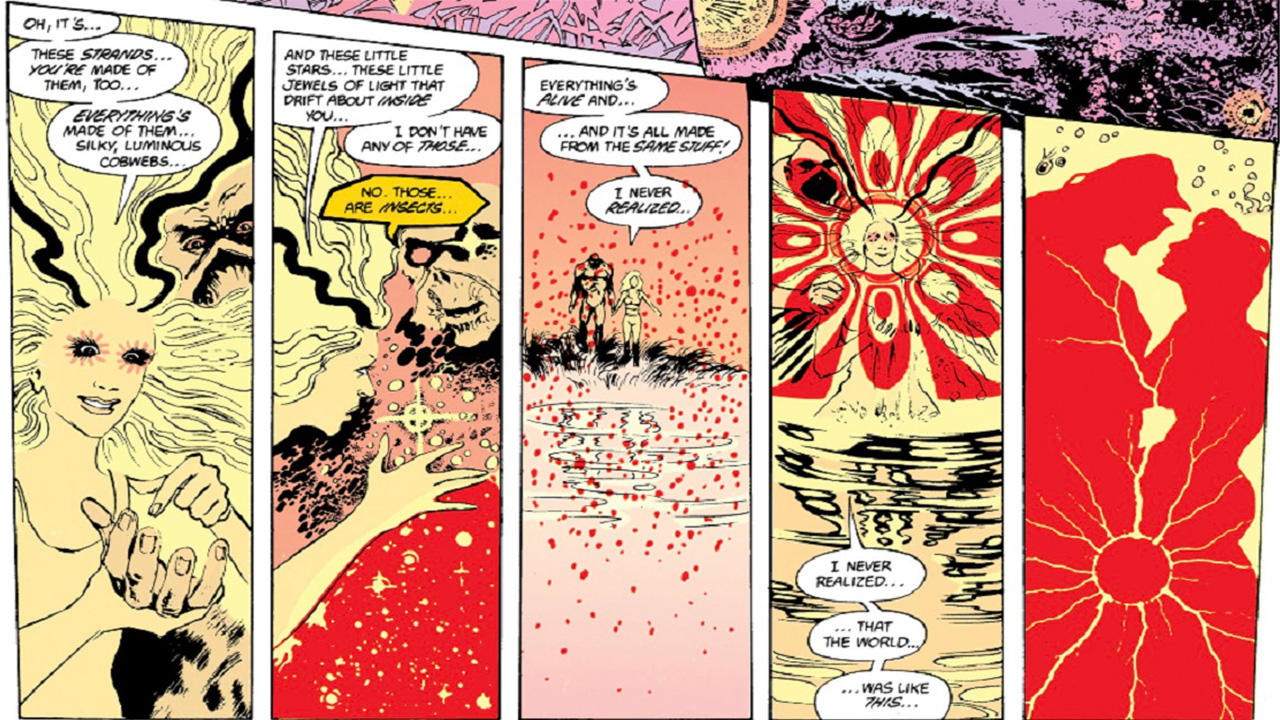 No talk about psychedelic DC Comics would be complete without mentioning The Saga of Swamp Thing #34, written by Alan Moore, and illustrated by Steve Bissette and John Totleben. Swamp Thing has lots of cool plant-based powers, but did you know about his ability to grow hallucinogenic yams? That one doesn’t really come in handy during battles against super-villains, but Swampy’s friends enjoy it. One such friend, Abby Arcane, realized she had fallen in love with him, and Swampy confessed that the feeling was mutual. Since the two couldn’t consummate their relationship by traditional means, Swamp Thing offered Abby one of his yams, so she could commune with him in the green. The Green is an elemental force that runs through all plant life, and Abby’s union with it resulted in one of DC's most praised stories, as well as the most psychedelic comic sequence ever. Words can't describe the hallucinogenic imagery found on its pages. It was a true sign that comics had evolved into a larger art form, and were long past the days of being disposable pulp entertainment.

Back in the 1960’s, the patriotic Caped Crusader would do anything for his country, even if it meant snapping his mind in a psychedelic experiment. All in the name of science, of course. In Batman #156 (written by Bill Finger with art by Sheldon Moldoff), the Dark Knight spent a few days in a sensory deprivation chamber, which had an interesting effect on his brain. Batman began hallucinating himself on a barren planet, fighting fantastical alien monsters. After the experiment ended, the hallucinations continued, with the Caped Crusader tripping out in the middle of his nightly patrols. On the plus side, the government got the data they needed about how astronauts would handle isolation, but Batman really needed therapy. During his Batman run, writer Grant Morrison retconned some of the sillier elements of the Silver Age into hallucinations from Batman’s time in the deprivation chamber. 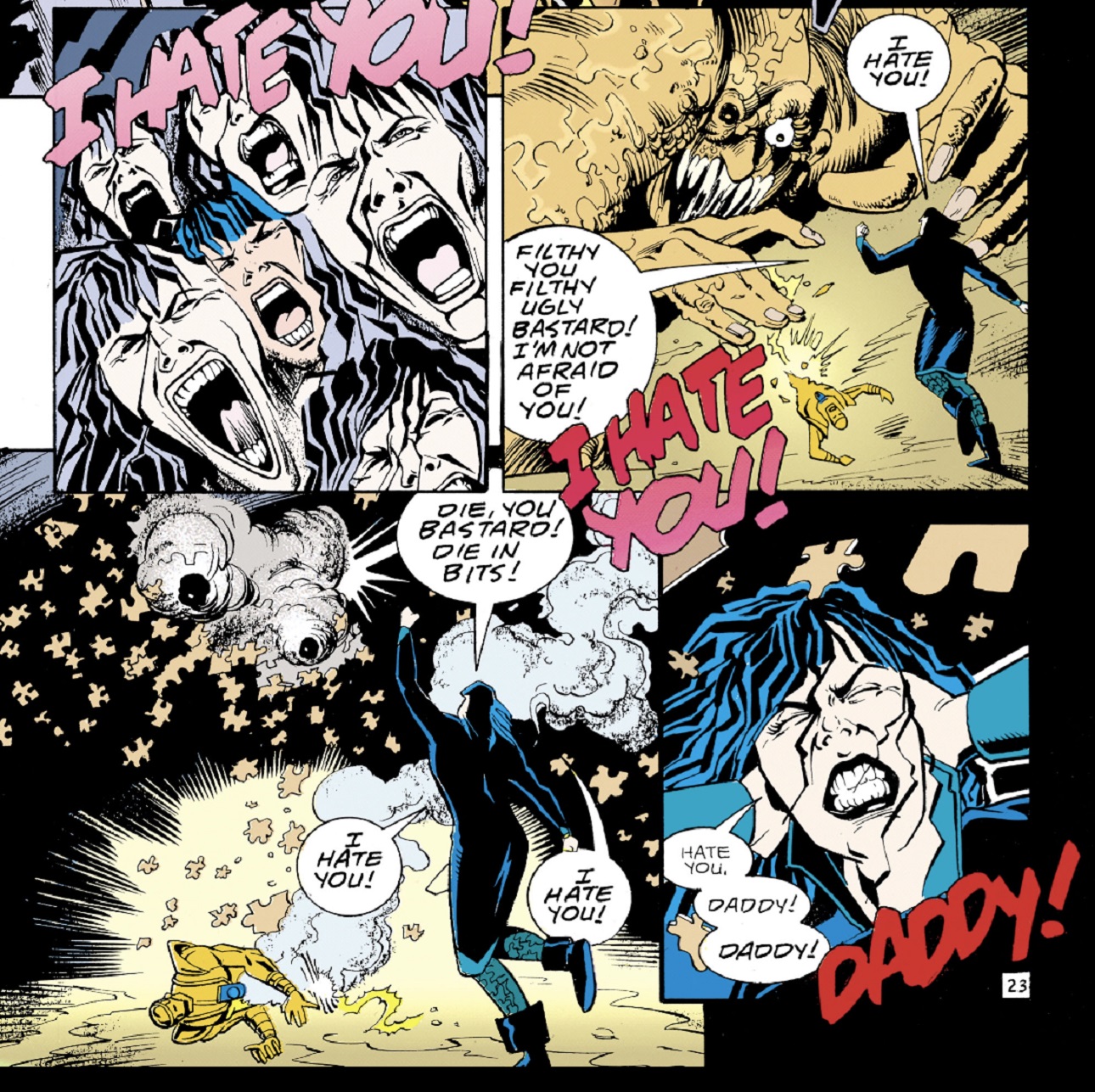 Have you ever met Crazy Jane? She’s the Doom Patrol’s resident schizophrenic, with 64 unique personalities. As you can imagine, things probably get a bit chaotic inside her head, as Robotman saw firsthand in 1990’s Doom Patrol #30, written by Grant Morrison and illustrated by Richard Case. A recent battle had left Jane catatonic, forcing Robotman to journey inside her mind to rescue her. Jane’s mindscape was known as the Underground, and was organized like a subway system. Each region was full of surreal imagery, colorful personalities, reality-warping set-pieces, and monsters that exploded into puzzle pieces. This issue was so mind-bending, it’s hard to believe they found a way to adapt it in live-action! After reading Doom Patrol #30, check out the Doom Patrol episode “Jane Patrol” – if your mind can handle it!

OUT OF BODY EXPERIENCE 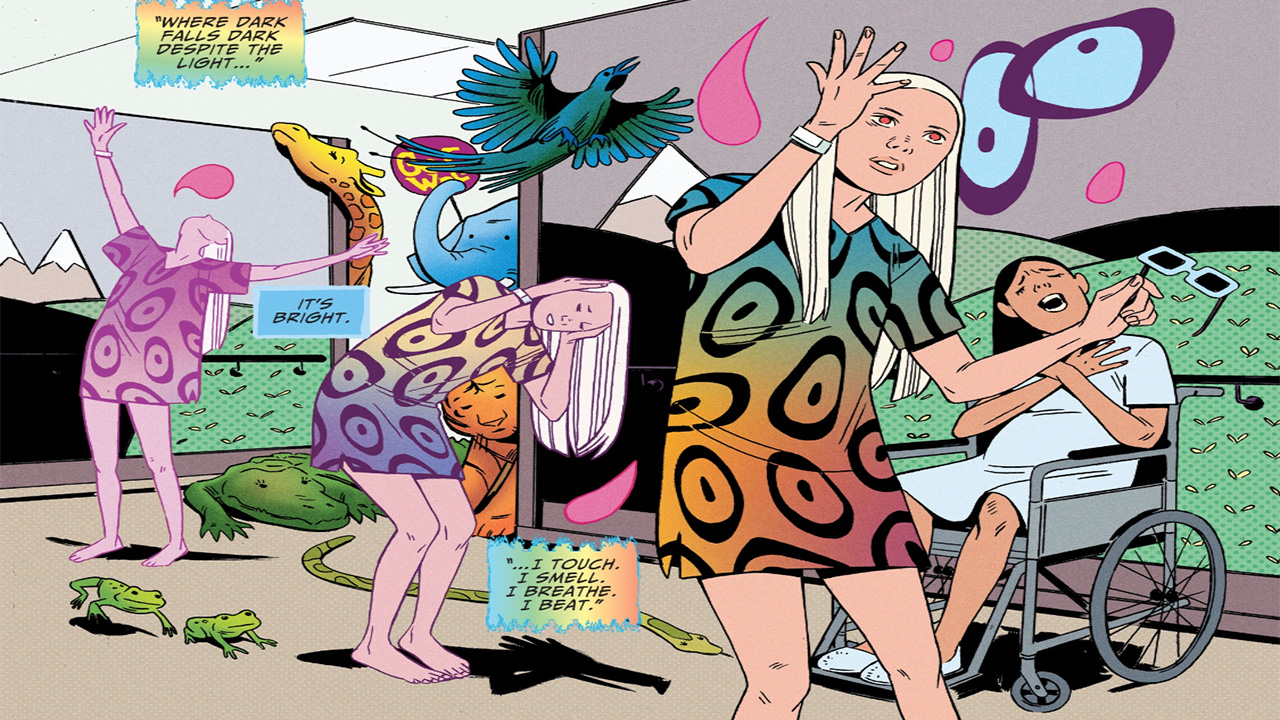 If you’re in the mood for an out-of-body experience, then look no further than Shade, The Changing Girl #1, written by Cecil Castellucci and Gilbert Hernandez with art by Marley Zarcone and Gilbert Hernandez. The story follows an alien named Loma who steals the M-Vest from an intergalactic museum. The M-Vest once belonged to Shade, The Changing Man, and it has the power to alter reality, create illusions, and project yourself into another body. Loma uses it to begin a new life on Earth, inhabiting the body of a comatose teenage girl named Megan Boyer. Thanks to the nature of M-Vest, this comic contains lots of mind-bending imagery, and the reader can’t be sure what’s really happening and what’s coming from Loma’s imagination. Is it the vest, or is it all in Loma’s head? It’s hard to say, especially since Loma’s not even using her own body! 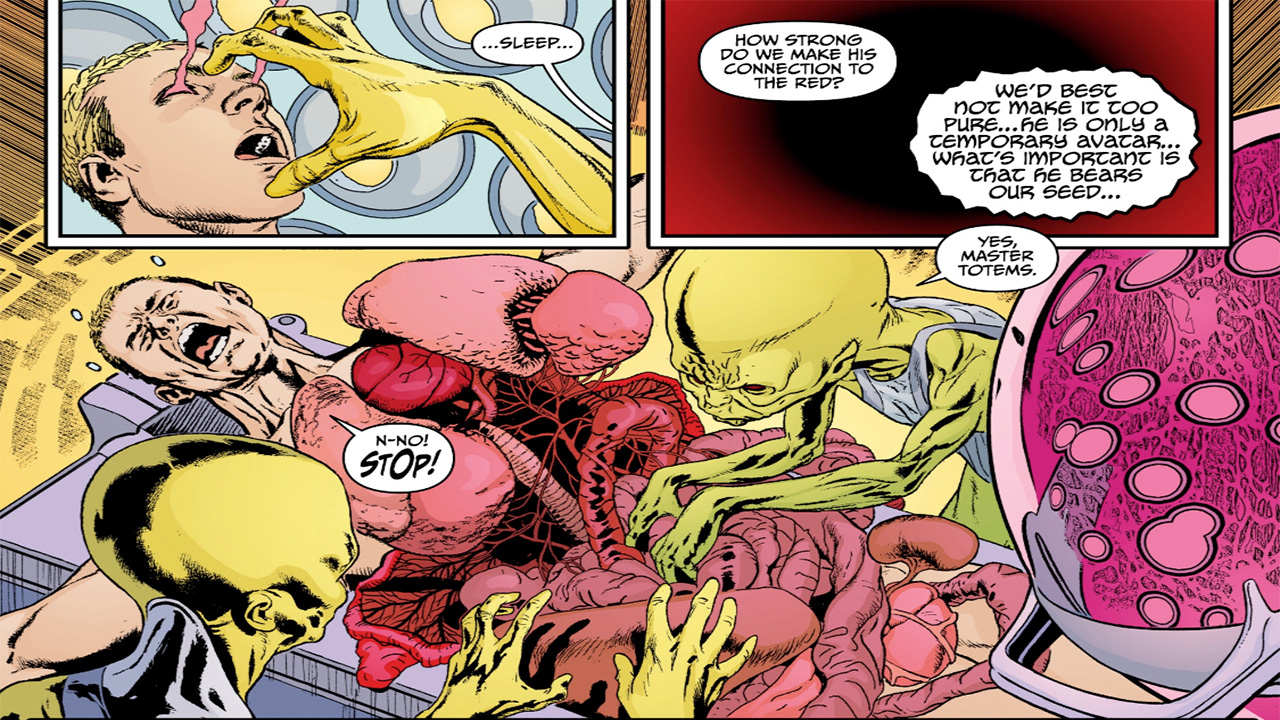 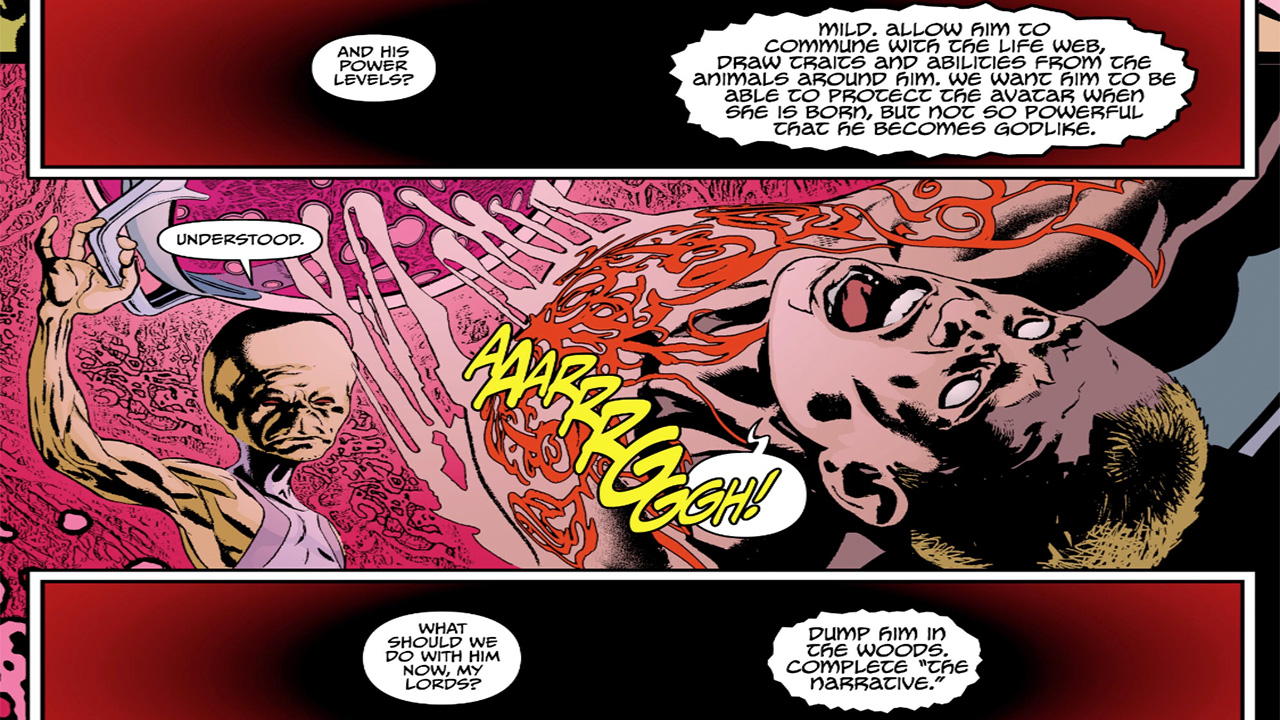 There are things in this world that we’re not aware of, because our senses wouldn’t be able to comprehend them without our minds snapping. Buddy Baker got a taste of this in 2012’s Animal Man #0 (written by Jeff Lemire with art by Steve Pugh), when Buddy was chosen to be the Red’s next champion. Like the Green, the Red is an elemental force that connects all animal life, and their presence in the comic led to some psychotropic imagery. In fact, the keepers of the Red decided that Buddy’s sanity would snap if he saw their true form, so they staged another scenario for his origin. The Red created an “alien autopsy” type situation where Buddy saw his body open up and his internal organs rearranged. In other words, the “less trippy” option was just as freaky.

What are your trippy comic book recommendations? Let us know in our Community!