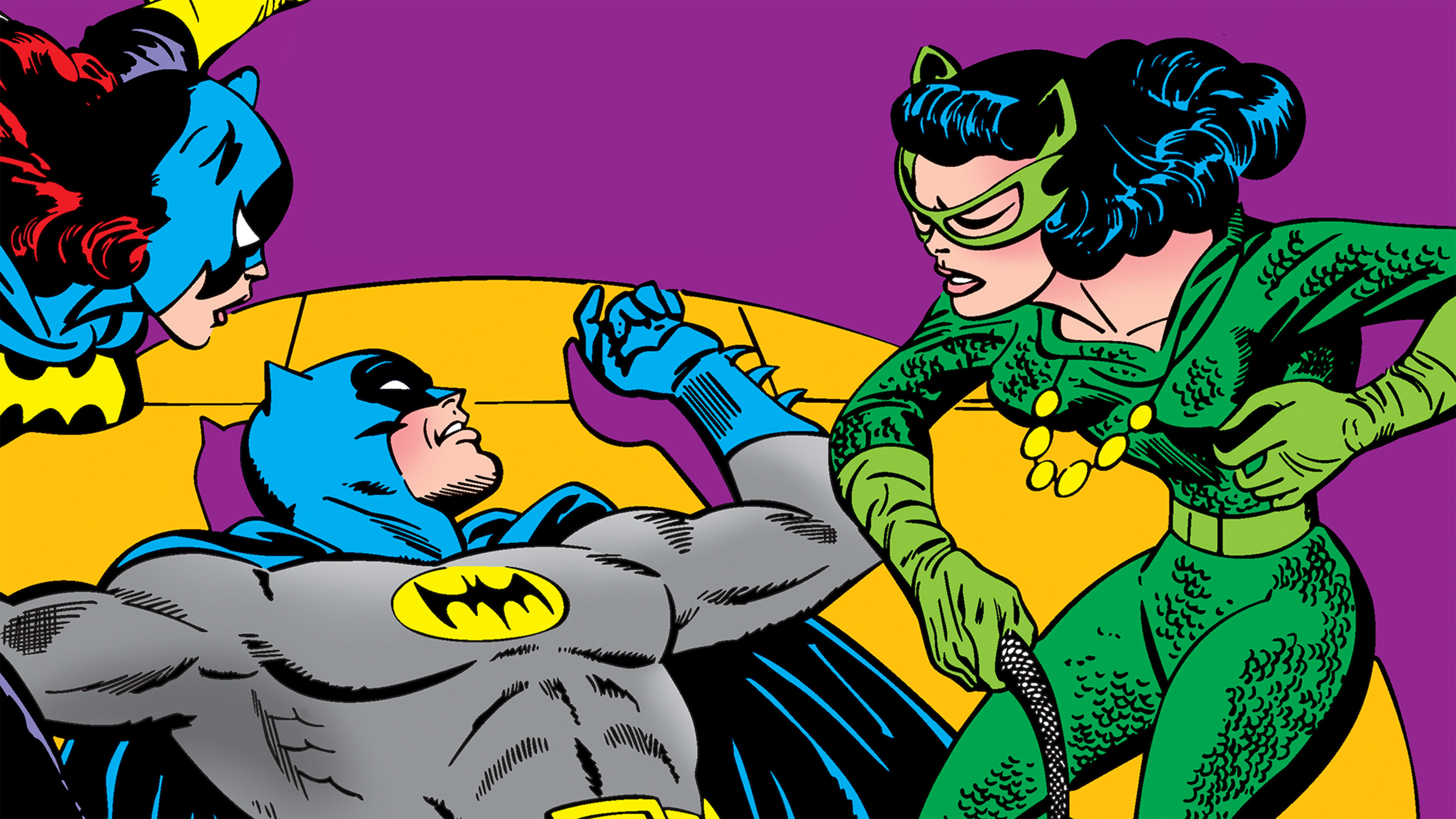 Lock your vaults, and hide your jewelry, because Catwoman is on the prowl! All week we’re celebrating the Feline Fatale’s 80th anniversary by diving into our comic archives and looking at Selina’s 9 lives. Yesterday we took a look at her greatest Golden Age capers. Now it’s time to spotlight her Silver Age villainy in the 1960s, as well as a little bit of her Bronze Age bodaciousness in the '70s...

After having a jungle adventure with Batman and Robin in 1954’s Detective Comics #211, Catwoman disappeared for 12 years. The comic book industry was under heavy scrutiny after the publication of Dr. Fredric Wertham’s Seduction of the Innocent, which attempted to link superhero comics with the rise of juvenile delinquency. The Comics Code Authority was established by the industry as a way to self-regulate, and make sure comic book companies stayed within certain "decency" guidelines. Although there was nothing to stop DC from ignoring the Comics Code Authority guidelines, doing so would make it difficult to get their books distributed. 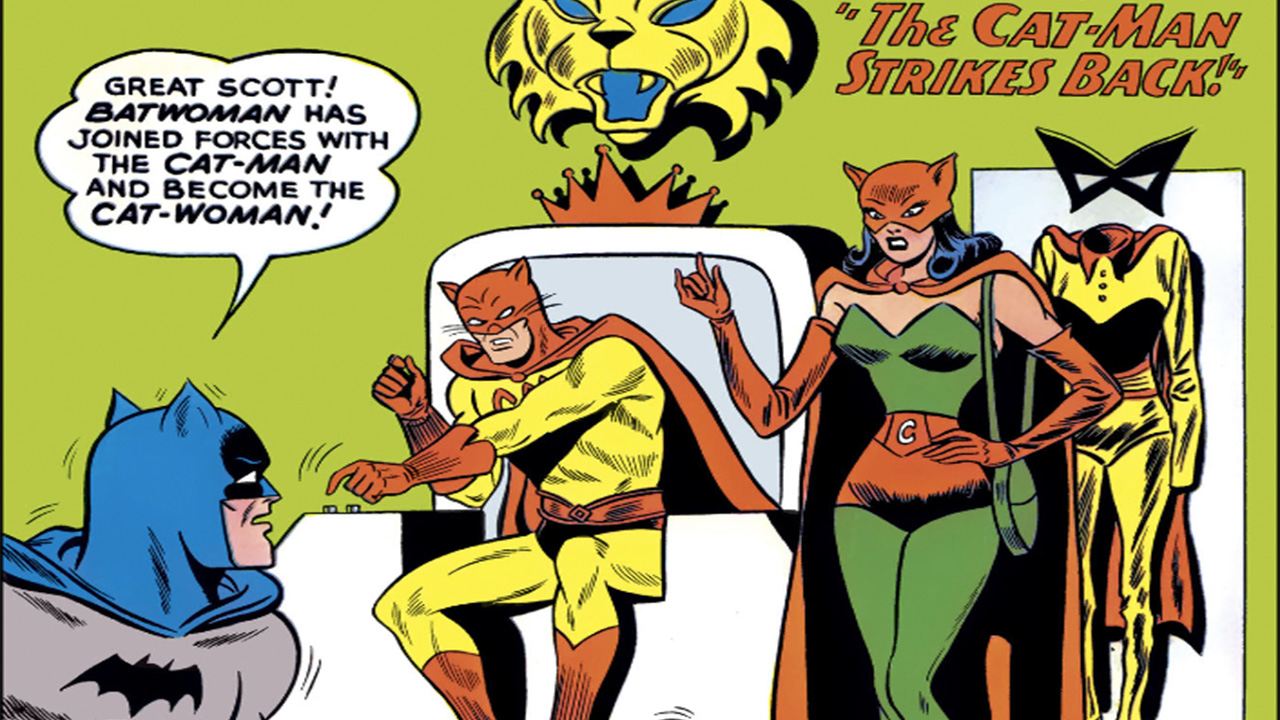 The early Comics Code Authority guidelines had especially strict rules about the portrayal of women and villains, and Catwoman was both. It seemed easier to sideline Catwoman, which led to her 12 year disappearance. The Batman books went in a new direction, as Gotham’s traditional rogues were replaced with science fiction monsters and aliens. Catwoman was replaced as Batman's love interest by Batwoman, a socialite who followed the Caped Crusader’s crime-fighting example. Although Batwoman is a strong character in modern books, her original incarnation had more in common with Lucy Ricardo than Ruby Rose. Batwoman lacked Catwoman’s independence and fiery spirit. The closest thing readers got to Catwoman during the 12-year drought was in 1963’s Detective Comics #318 when Catman briefly convinced Batwoman to become his Catwoman. 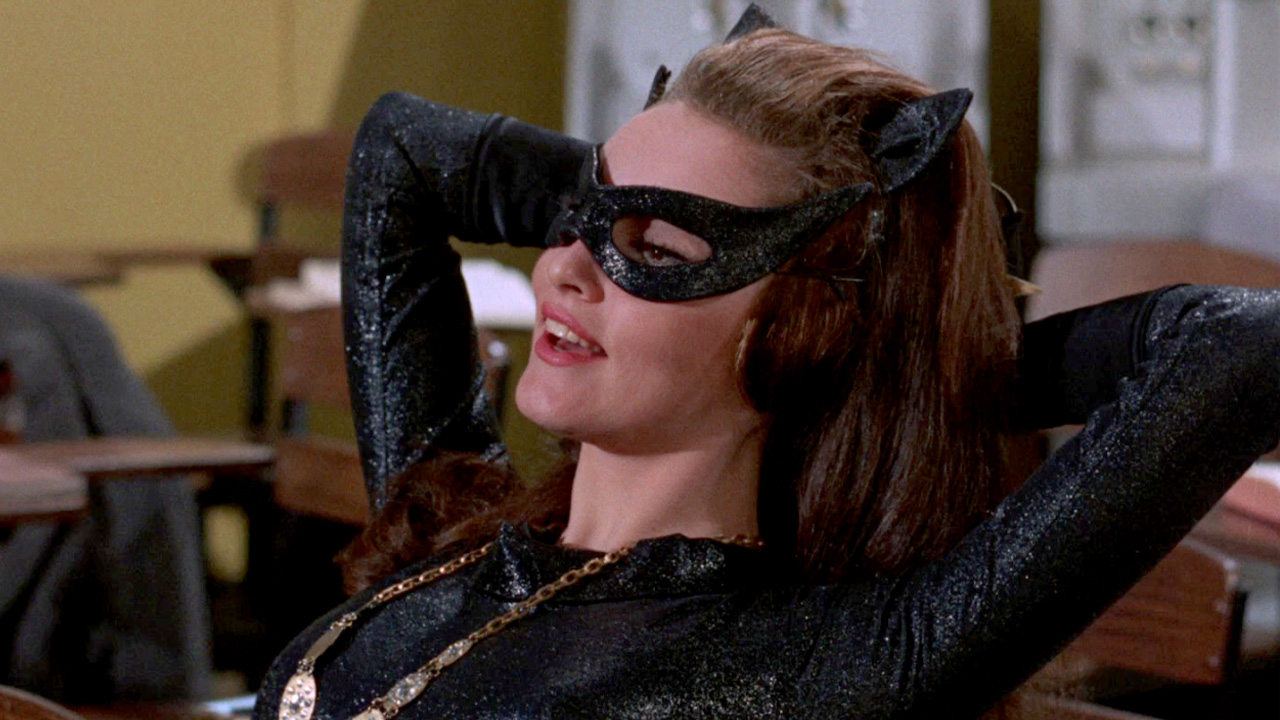 Then 1966 came, and Catwoman went from persona non grata to a household name. The live-action Batman show premiered on ABC and ushered in a wave of Batmania across the world. The series heavily featured Batman’s classic rogues and gave Catwoman her second life. In her first live-action incarnation, the Feline Fatale was portrayed by three actresses – Julie Newmar, Lee Meriwether, and Eartha Kitt – over the course of the series three seasons and feature-length motion picture. Though the show indulged in camp, Catwoman, like most of the villains, stayed true to her Golden Age roots. She had a commanding presence, she was dangerous, and her sexual tension with Batman was palpable.

Catwoman’s return to comics occurred in an unexpected place – a Pop-Tarts tie-in comic. In early 1966, the Kellogg Company embraced Batmania by commissioning DC to publish a series of mini-comics to be packaged with their Pop-Tarts products. Writer E. Nelson Bridwell and artist Carmine Infantino quickly produced a short adaptation of 1947’s Batman #39.

Selina’s return to traditional comics occurred in another unexpected place -- a two-part story running in Superman’s Girlfriend Lois Lane #70-71. Catwoman’s characterization in the story took heavy inspiration from the Batman television series. Selina dropped lots of cat-puns, she had her gang members dress up in cat costumes, and she used a mix of magic and science-fiction devices. The comic is also notable for being the first time Catwoman faced off against a hero other than Batman. Selina did well against Superman, using the magic wand of Circe to transform the Man of Steel into a cat, and placing him in a Kryptonite cage.

In 1967 Catwoman made her grand return to the Bat books, with a cliffhanger cameo in Detective Comics #369 setting up her appearance in Batman #197. The Feline Fatale traded in her traditional purple outfit for a capeless green jumpsuit and domino mask, partially inspired by Julie Newmar’s look on the Batman television series. Catwoman called the Mod-inspired makeover her “Now Look.” Selina’s obsession with cats was now taken to the maximum level, as she was unable to commit a crime without a cat connection, and almost every word out of her mouth was a cat-pun. Her affection for the Dark Knight still burned heavily, with Catwoman spending most of the story trying to convince Batman to marry her. 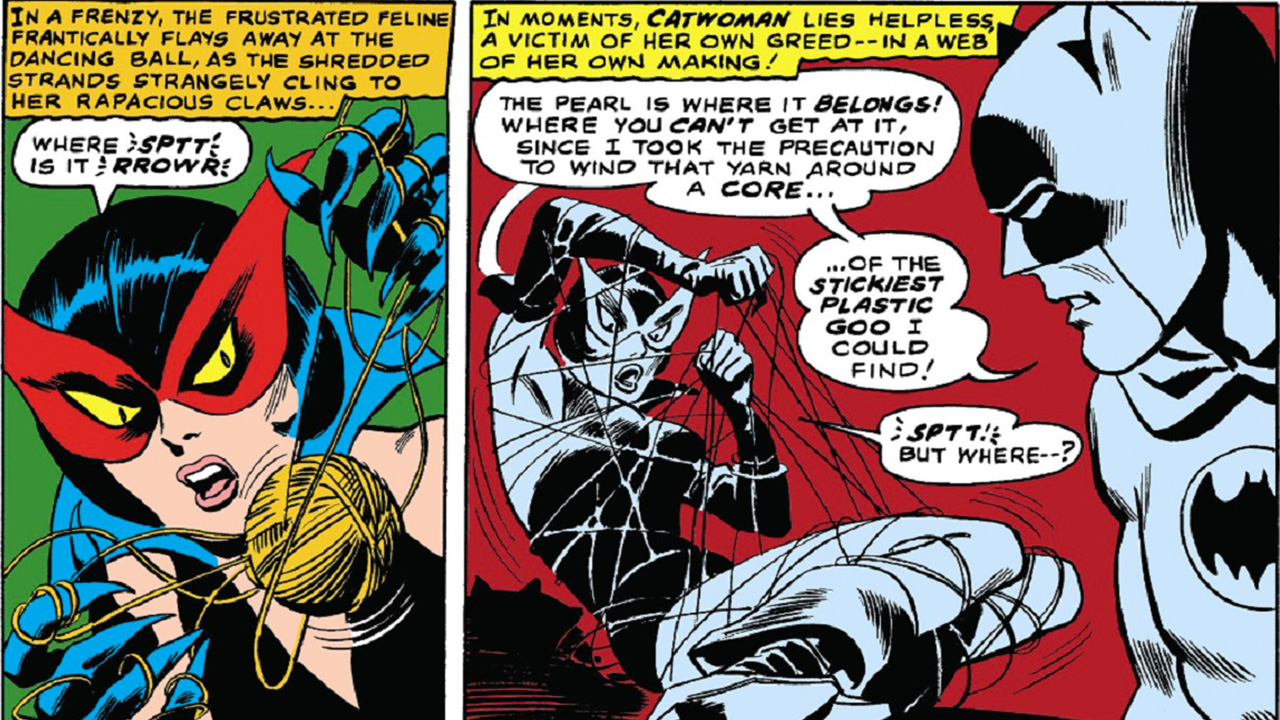 In 1968, after the cancellation of the live-action Batman series, Catwoman made her animated debut in Filmation’s The Adventures of Batman. Jann Webb voiced Selina, who wore her comic counterpart’s “Now Look” outfit. Filmation’s Catwoman stayed true to her comic book and live-action incarnations, reveling in her evil (and cat puns). After a brief appearance alongside Gotham’s other criminals in Batman #201, Catwoman retired her “Now Look” and became an entirely new woman in 1969’s Batman #210. Selina cut her hair, got a new black jumpsuit with a tail, and took a more serious approach to crime. Batman and Alfred ultimately defeated her with...a ball of yarn. The days of camp weren’t completely behind her. 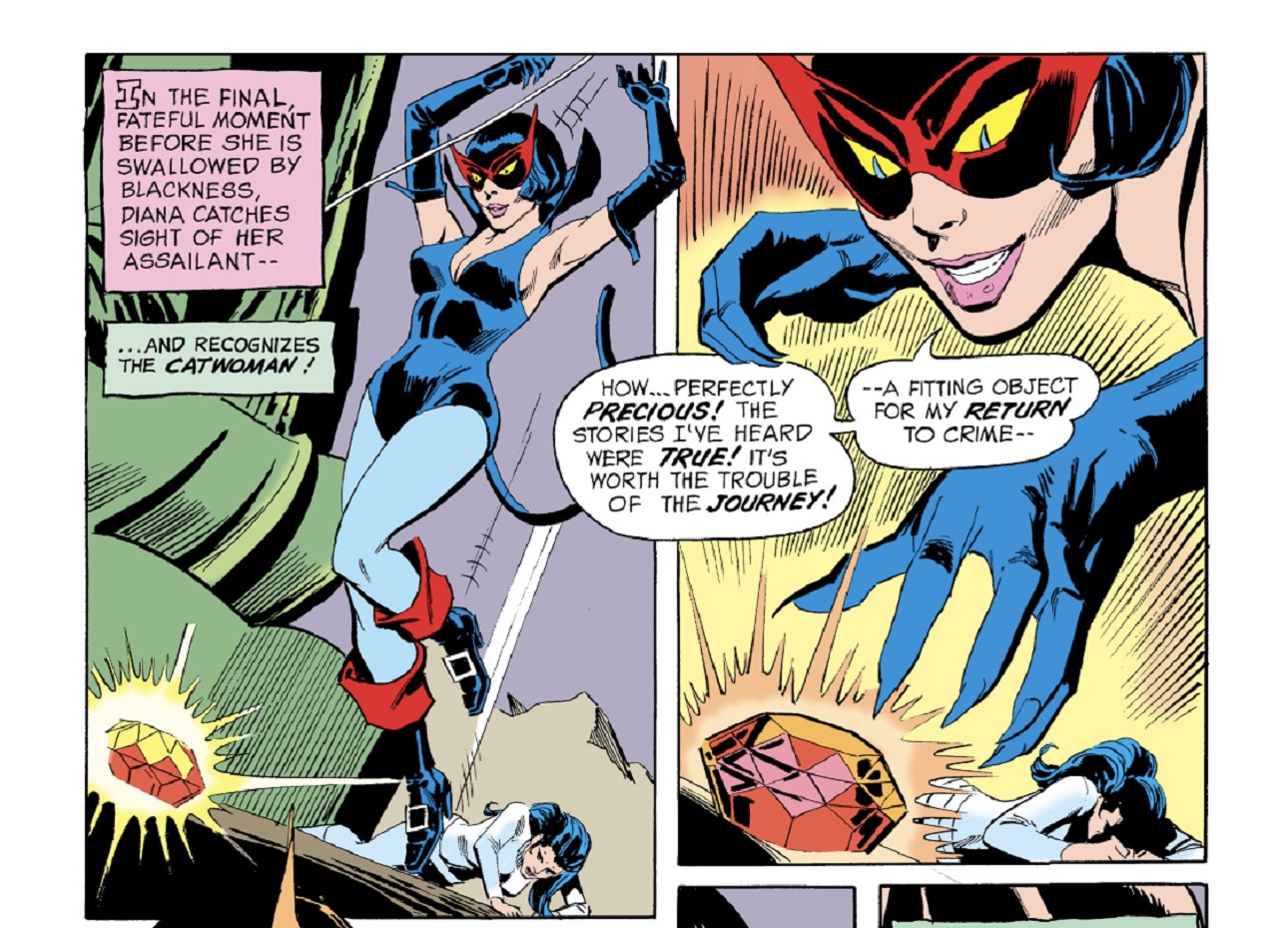 For the next few years, Selina would alternate between her black jumpsuit and her traditional purple costume depending on the story. She began to encounter other heroes outside of Gotham City, briefly meeting Black Canary in Adventure Comics #419 and battling Wonder Woman in 1972’s Wonder Woman #201-202. At the time Wonder Woman had been depowered, and Catwoman held her own against the Amazon princess. After Diana saved Selina’s life, however, she agreed to help her fight off a group of their mutual enemies. Although Catwoman’s characterization had bordered on cartoonish in the years prior, this move harkened back to her Golden Age stories, in which she showed signs of compassion and heroism.

This was reinforced in 1975's Batman #266, in which Selina was set free after her prison bus crashed. Selina had intended to serve out her sentence and start a new life, and she pondered if she should do the right thing and turn herself in. While chasing after the escaped convicts, Batman decided Catwoman was a low priority because she wasn’t a murderer like the other cons. The seeds were planted for Catwoman’s rehabilitation, but she wasn’t ready yet.

Selina’s appearance in 1976's The Joker #9 is historically notable because she kisses the Clown Prince of Crime, when he was disguised as Batman. As an interesting bit of trivia, it’s entirely possible that Catwoman was the Joker’s first on-panel kiss. As odd as the Joker liplock was, Selina’s appearance in The Brave and the Bold #131 was even stranger. Catwoman, who'd been showing signs of redemption in recent years, plotted to betray America by selling its secrets to foreign powers. As part of her sinister plot, Selina was appointed Ambassador to Sudaria. Even more shocking, the story had Catwoman murder multiple people, although the tale's continuity has since been disputed (see Footnote 1 below). 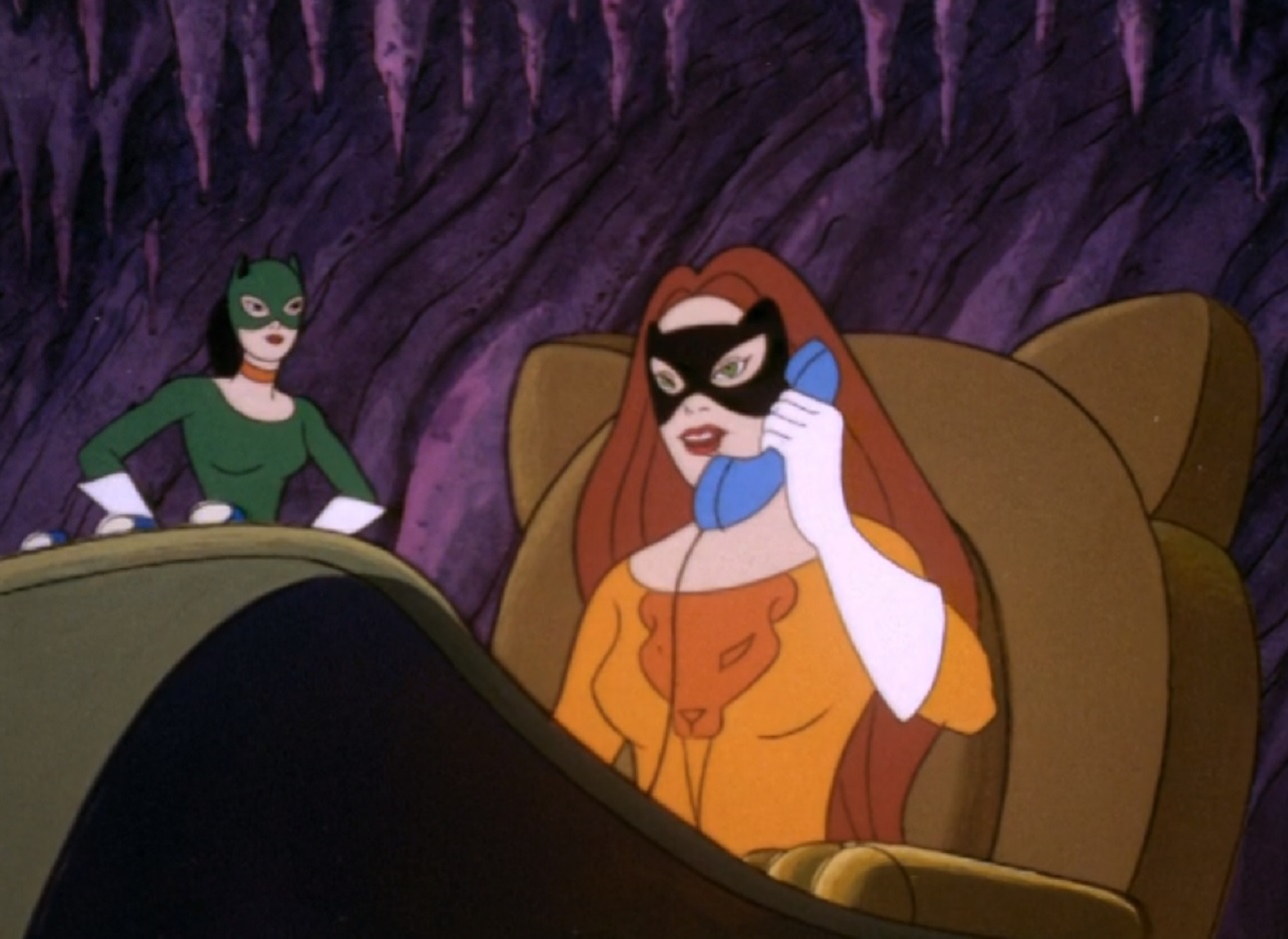 Catwoman returned to television in 1977’s The New Adventures of Batman, wherein the Feline Fatale was voiced by Melendy Britt. The cartoon, which reunited the team of Adam West and Burt Ward, was heavily influenced by the previous decade’s live-action series, with Catwoman committing wacky crimes. One of her capers – from the episode “Trouble Identity” – saw her steal a machine that turned garbage into furs. 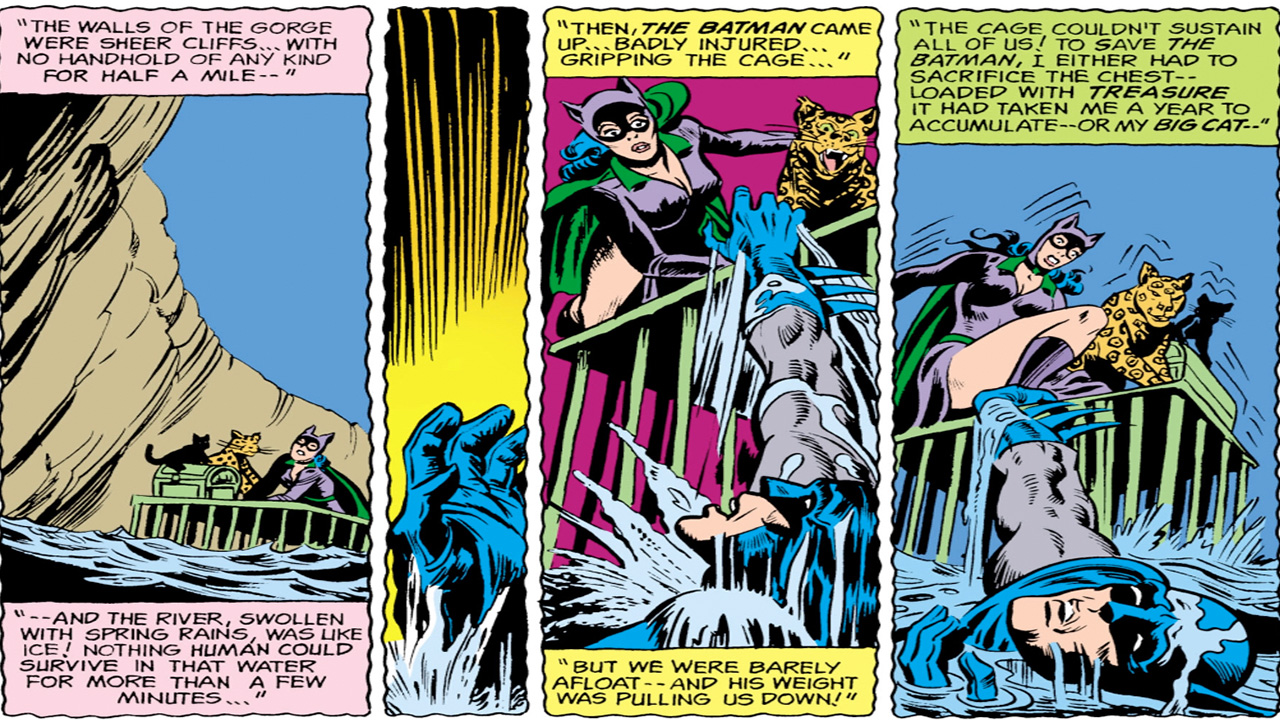 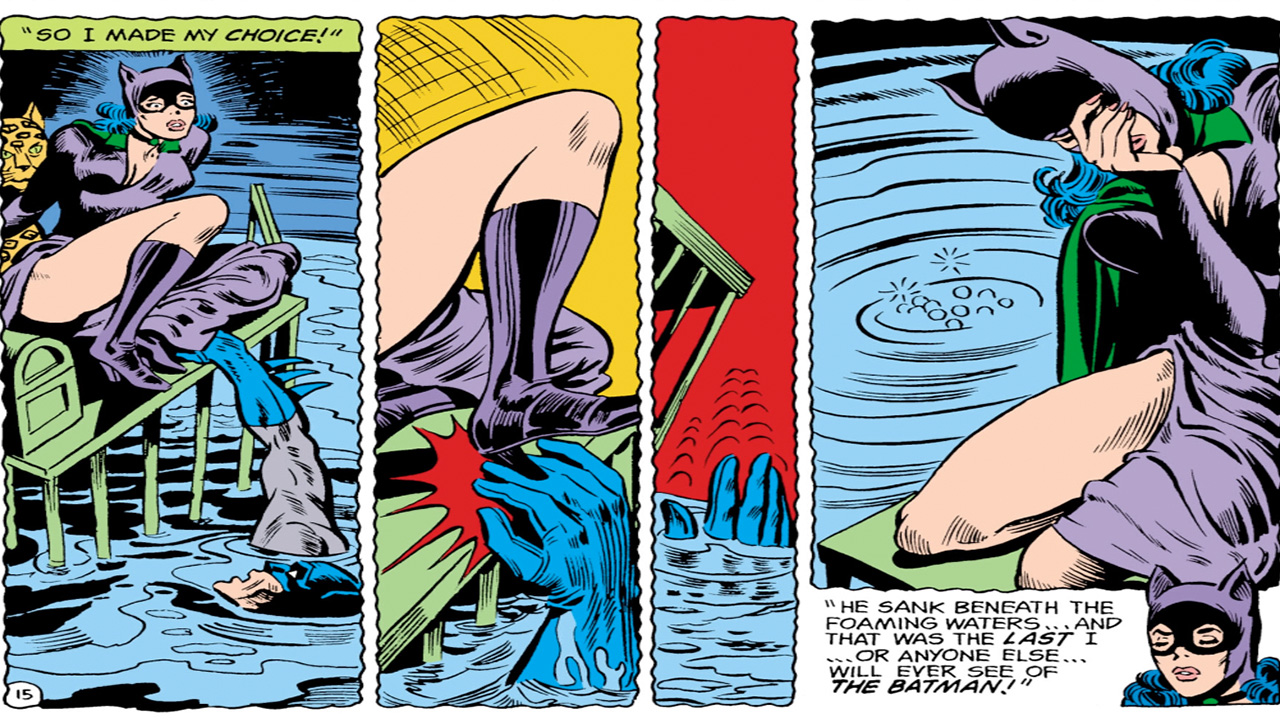 Batman #291 continued Selina’s journey to redemption. Its multi-part story begins with Batman missing, and each of his rogues believe they’re responsible for his death. During Catwoman’s “testimony” she states she let the Dark Knight drown so she could save her own treasure. As Selina recounts the events, she’s clearly remorseful over how things went down, wishing she had the courage to make a more heroic choice. The story portrays Catwoman as a tragic figure, one who keeps on throwing away her opportunity for a clean life because the temptation of crime is too strong. Luckily for Catwoman, Batman survived. 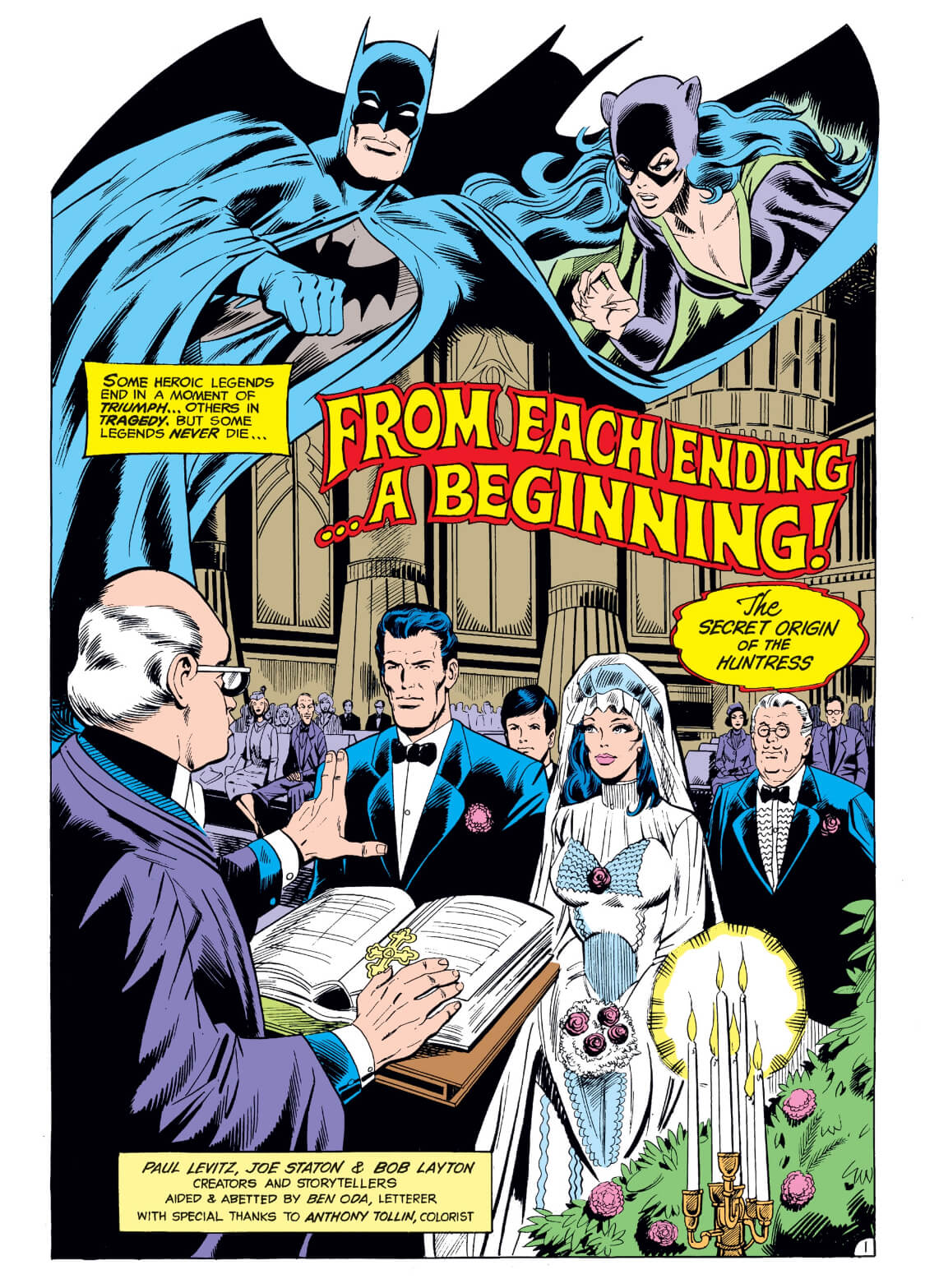 In 1977 readers got to look at what life would be like for a reformed Catwoman, in DC Super-Stars #17. This alternate universe story, set on DC’s Earth-Two (see Footnote 2), had Catwoman give up her life of crime, marry Bruce Wayne, and raise a daughter named Helena. Unfortunately Selina’s criminal past caught up with her when a former associate blackmailed her into resuming her life as Catwoman. When Batman tried to defuse the situation, a stray bullet from one of the crooks took Selina’s life. She died in her husband’s arms repenting for her crimes.

Inspired by her father, and determined to bring her mother’s killer to justice, Helena Wayne suited up as the Huntress, beginning a heroic career that has earned an enduring legacy all its own. While on an interdimensional trip to Earth-One in Batman Family #17, Huntress battled Catwoman. But Huntress had a hard time facing this doppelganger of her late mother. The story is also notable for being the first team-up between Catwoman and Poison Ivy.

After reembracing her villainous roots in the 1960s and the 1970s, Catwoman’s destiny was about to go in a whole new direction. Join us tomorrow as Selina finds redemption and romance!

* DC Super-Stars #17 – Death of Earth-Two Catwoman and the first appearance of the Huntress.

Footnote 1: Although past stories had Catwoman try to murder Batman or other heroes, she always held back and it was generally accepted that she was no murderer. A running joke in DC fan community was that The Brave and the Bold #131 (and other out-of-character stories from that title) took place on “Earth-B.” A multiverse index from Crisis on Infinite Earths: Absolute Edition put the matter to bed, by placing this story on Earth-Thirty-Two. Therefore, Selina Kyle isn’t considered a killer in the main DC continuity.

Footnote 2: Earth-Two is a world where the Golden Age heroes aged in real time. This allowed creators to tell stories where the heroes would mature, get married, become parents, and in some cases retire. In some cases, the heroes of Earth-One and Earth-Two shared similar backstories. For example, the Caped Crusader’s first meeting with Catwoman in 1940’s Batman #1 is a Golden Age story that took place on Earth-Two, but Batman #208 states that the same events occurred on Earth-One. It is generally assumed the Batman of Earth-One and Earth-Two share the same history, until a divergent point at which the Earth-Two incarnation got married.

What’s your favorite version of Catwoman? Let us know in our Community!