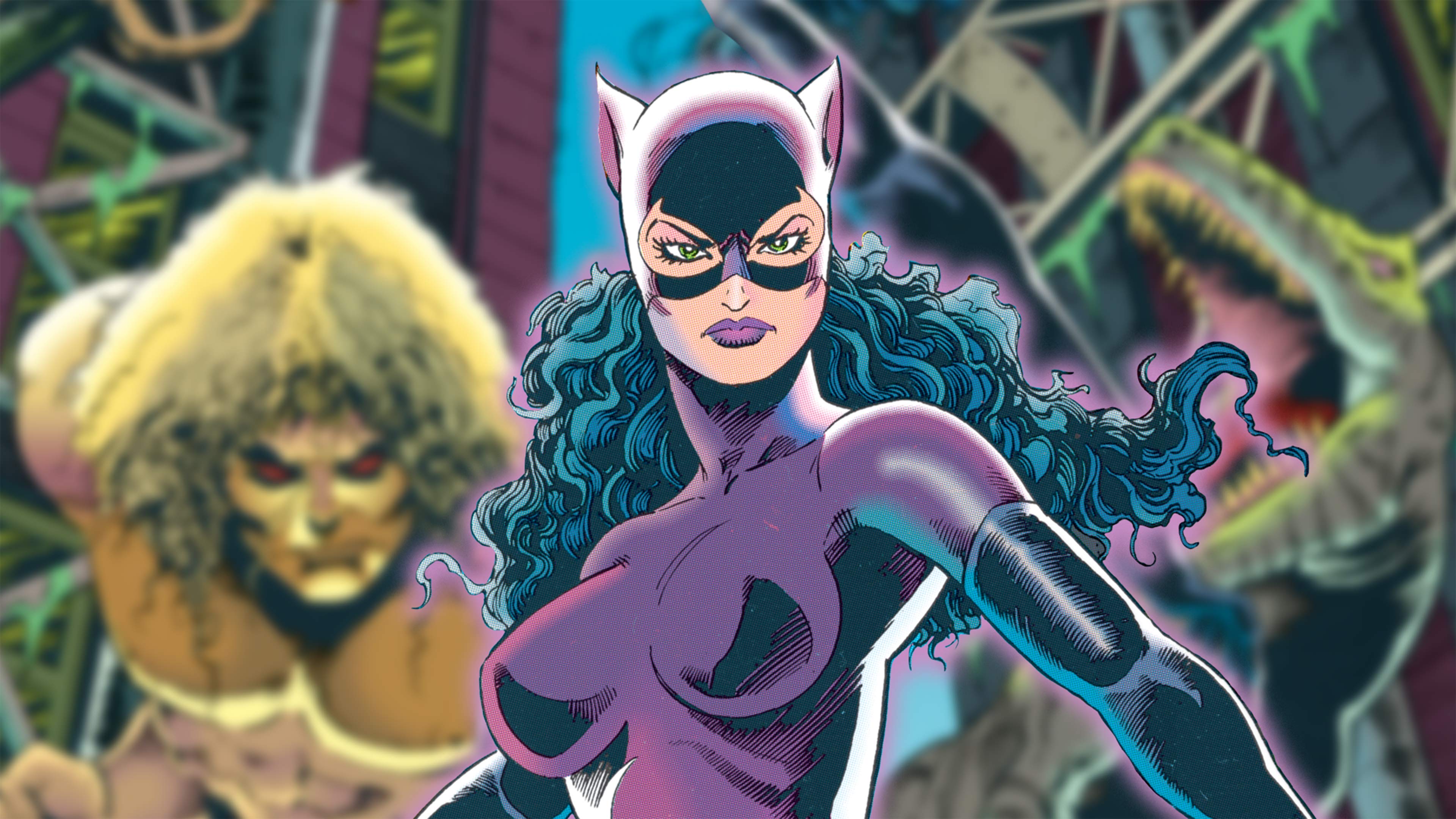 Our week-long celebration of Catwoman’s 80th anniversary continues, and we’re taking a look at all of her nine lives! Earlier this week we took a deep dive into her Golden Age origins, her Silver Age comeback, and her Bronze Age redemption. Today, we’ll be taking a look at her Modern Age reinvention. When we last left Selina, she had reformed and spent an extended period of time as Batman’s partner, before the Joker brainwashed her into returning to crime. The Feline Fatale was returning to her criminal roots, and thanks to the reality-altering events of Crisis on Infinite Earths, her legend was about to begin anew. 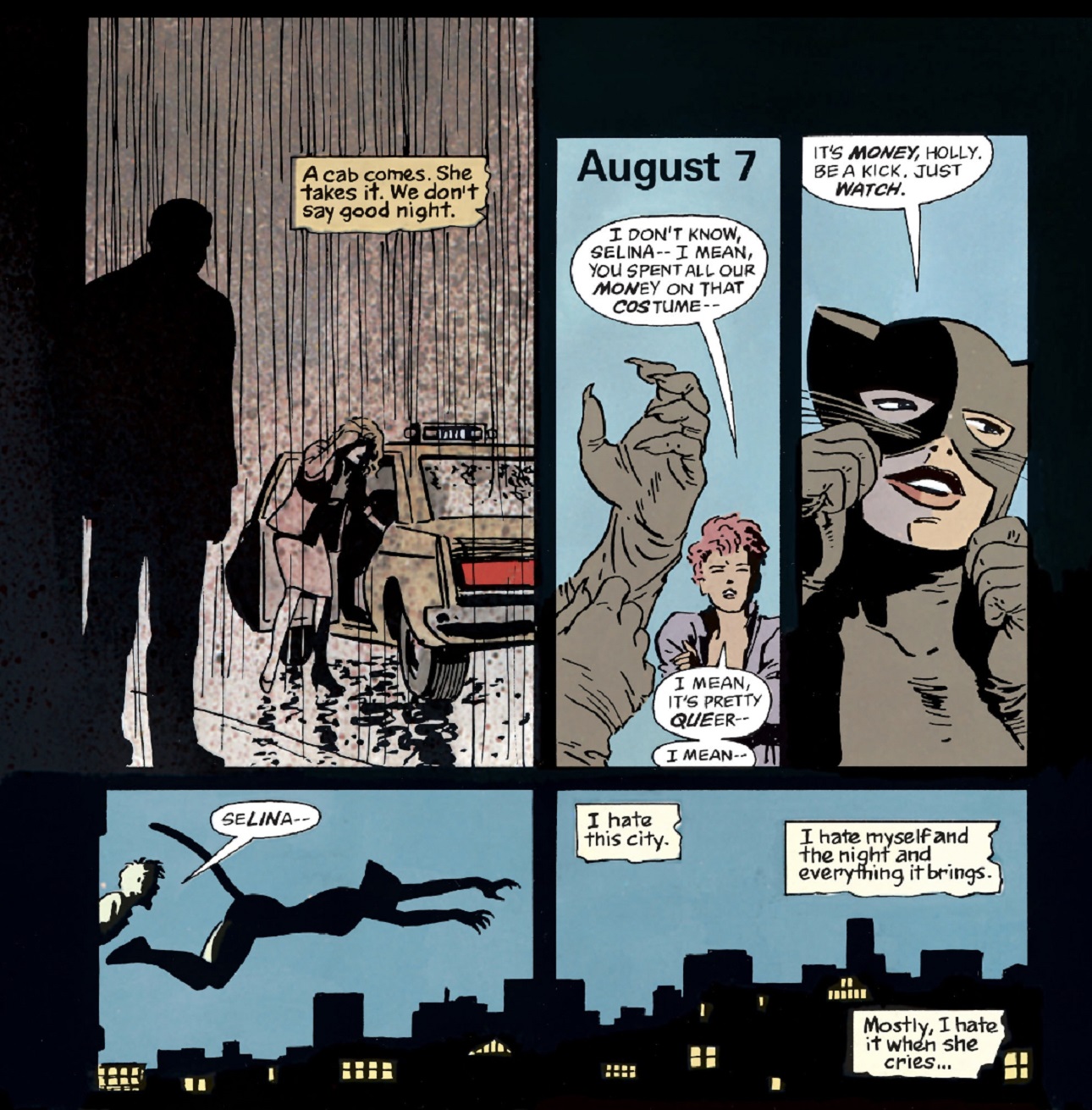 In 1987 writer Frank Miller and artist David Mazzucchelli electrified comic readers with Batman: Year One. Running in Batman #404-407, the story gave fans a new take on the Dark Knight’s origin, focusing on Batman’s early days and Jim Gordon’s quest to rid the Gotham City Police Department of corruption. The storyline revamped Catwoman’s origin as well, reinventing Selina Kyle as a sex worker who decided to take charge of her own destiny by becoming Catwoman. In Miller’s take, Selina was inspired by Batman’s example, and realized she didn’t need to take any abuse from the world. After punching her pimp, Selina began stalking the night as Catwoman, taking what she wanted from the world instead of being a victim.

The impact of Batman: Year One is too big to fully discuss here, and the effect it had on Catwoman has remained controversial. Some fans didn’t like Catwoman being a former prostitute, while other readers praised it, feeling it showcased how Selina, how anyone, could rise up from a bad situation. Selina’s background as a prostitute is still a debated topic, with later stories removing it from continuity (see Footnote 1 below). Batman: Year One also introduced Holly Robinson, a street urchin that Selina took under her wing. Holly would go on to become one of the most important people in Selina’s life. 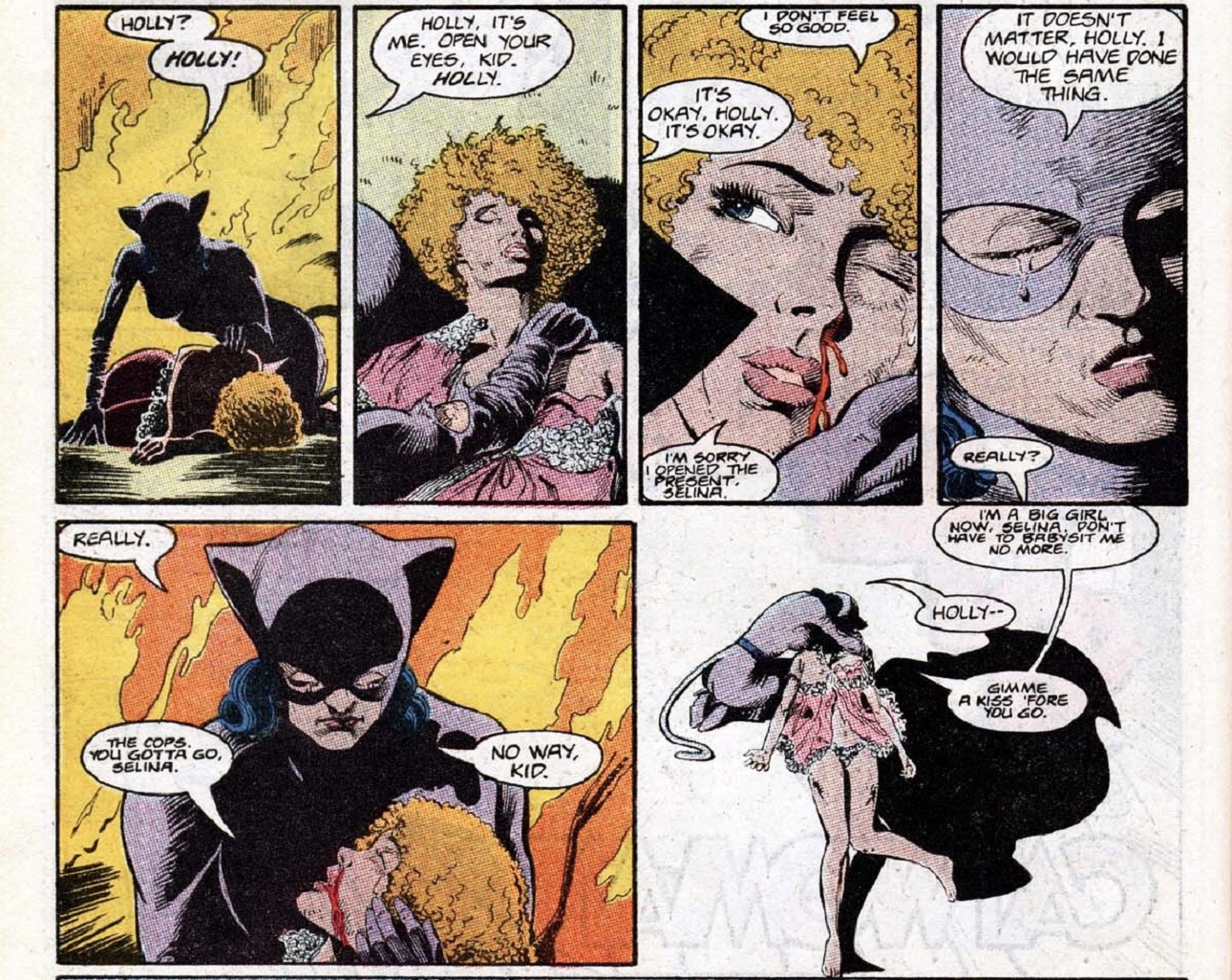 In the wake ofYear One, writer Mindy Newell explored Catwoman’s moder-day adventures in a four-part backup feature running in Action Comics #611-614. Here, Selina Kyle was no longer the impoverished street girl from Year One, now owning her own nightclub called the Tin Roof Club. Curiously, the story indicated that Catwoman’s secret identity was no longer public knowledge (see Footnote 2). This storyline also had Selina reconnect with her old friend Holly Robinson, who was killed in an explosion by her scheming husband (see Footnote 3). 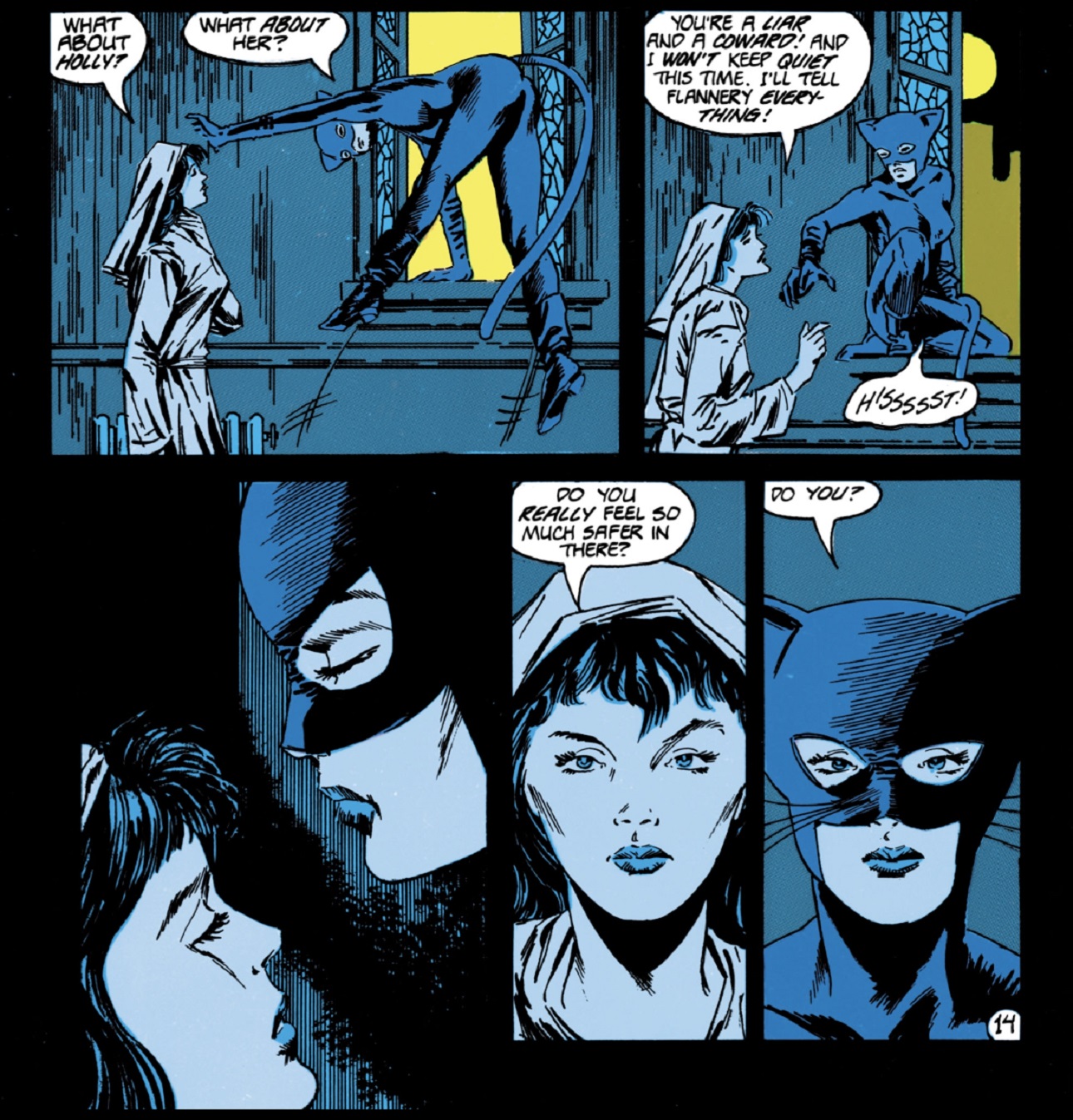 After the positive reception to her backup feature, Newell was given the chance to explore Selina’s history further with a limited series. After years as a supporting character, Selina was finally given her own title with 1988’s Catwoman #1-4.  The limited series explored the events of Batman: Year One from Selina’s point of view, and expanded upon her origin. Readers learned that Catwoman had been trained to fight by Ted Grant, who helped empower the young runaway into the Feline Fatale she is today. The story also introduced Maggie Kyle, Selina’s sister, who took a very different path. While Selina turned to crime to survive on Gotham’s streets, Maggie Kyle became a nun, who prayed for her sister’s soul every night. 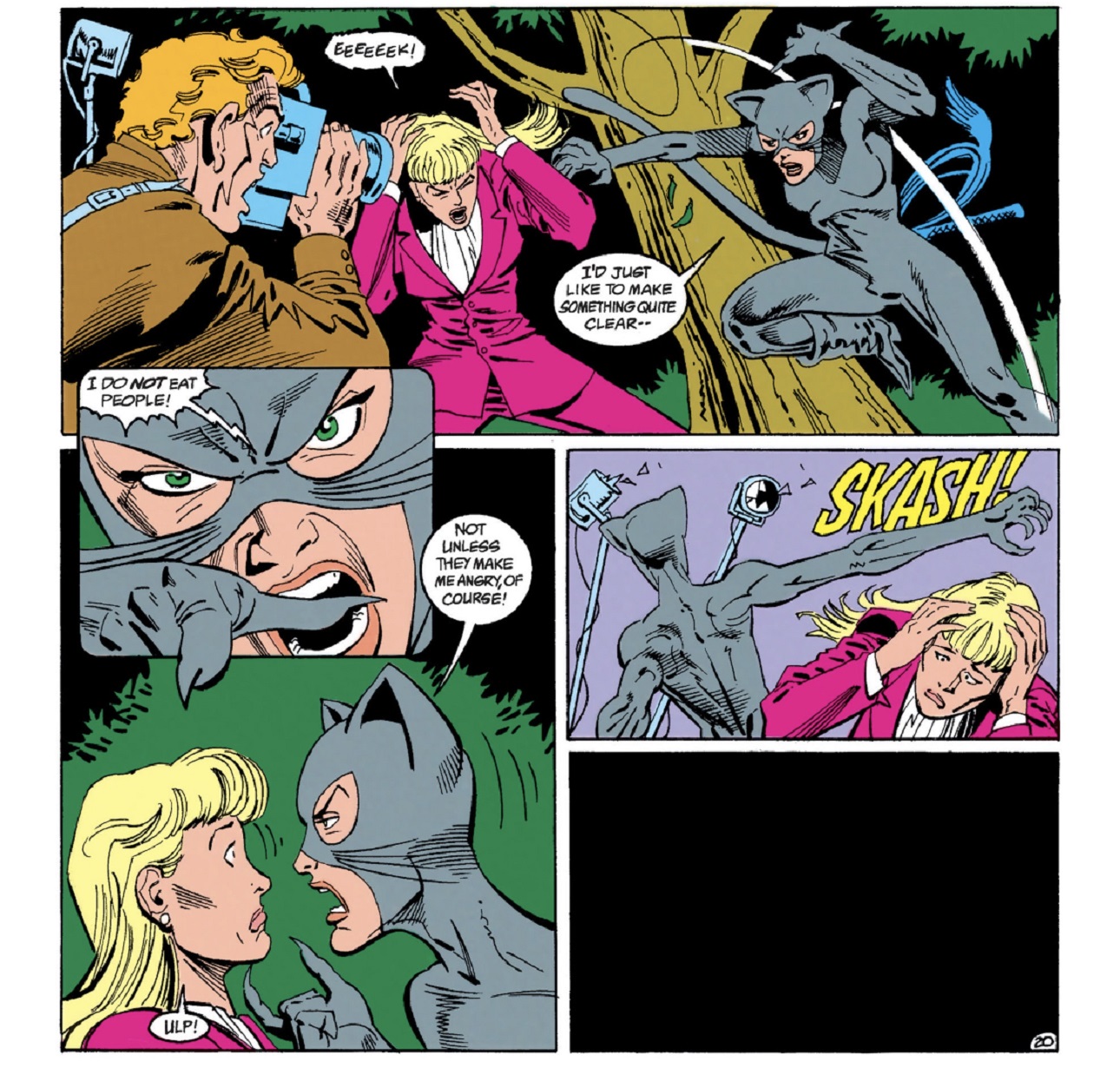 Newell’s portrayal of Selina set the tone for her Post-Crisis characterization. Catwoman was a thief, but she had a conscience. When Selina’s former pimp Stan fell to his death after tripping over his shoelaces, Catwoman felt guilty. She wasn’t a super-criminal like her Silver Age counterpart, she just wanted to steal things and be left alone. She cared about the people around her, like Holly and Maggie, and went to great lengths to keep them safe. While the new Selina was a compassionate character, she was also just as fierce as her feline namesake. In Detective Comics #612, Catwoman interrupted a news broadcast to threaten a reporter that had been spreading misinformation about her. In Batman #460-461 Catwoman teamed up with Vicki Vale and Sarah Essen to take down a human trafficking ring. Oddly enough, Catwoman kept her distance from the Dark Knight in both of those stories (see Footnote 4). 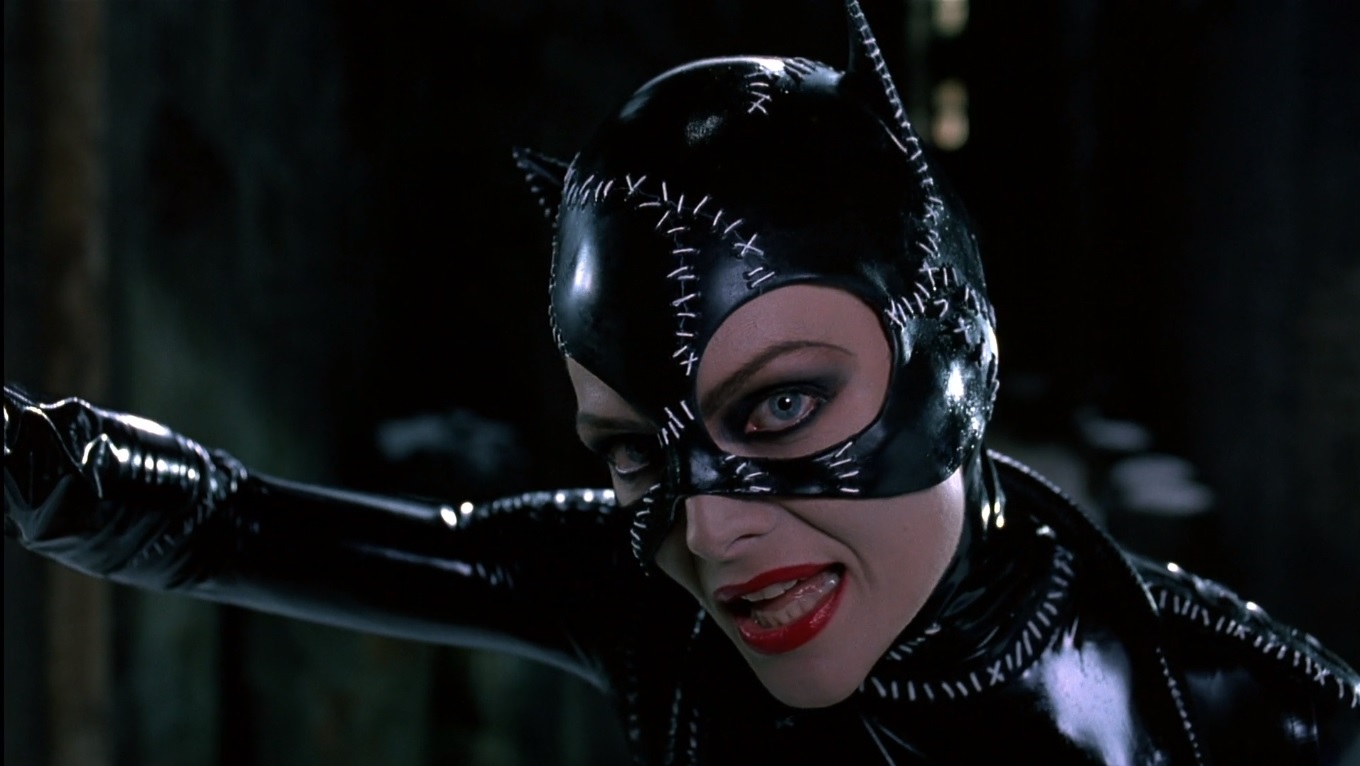 In 1992, director Tim Burton’s Batman Returns ruled the box office, and Catwoman was the film's the breakout star. Michelle Pfeiffer stunned audiences with her commanding performance as Selina Kyle, owning every scene she was in. Pfeiffer's Catwoman had a new backstory -- as a mousey secretary who snapped after her boss tried to kill her. Selina Kyle became Catwoman to take control of her life. Like her Bronze Age counterpart, the cinematic Selina was presented as a tragic figure. Batman attempted to pull Catwoman back from the abyss, before her quest for revenge consumed her. In the end Catwoman chose hate over love, leaving the Dark Knight heartbroken... The positive reception was so strong that executives began discussing a Catwoman spin-off film. But it would be over ten years before anything came to fruition. 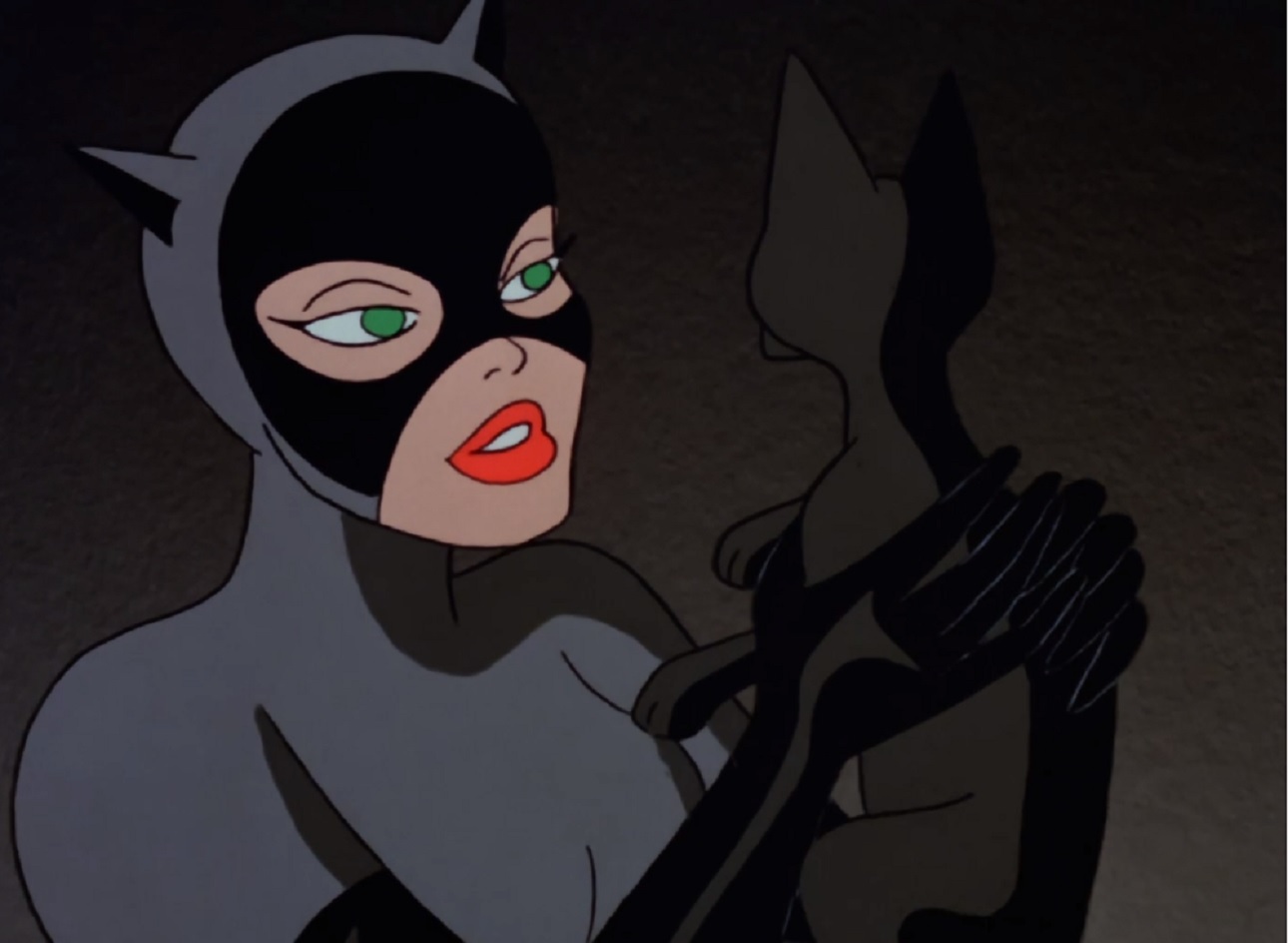 After becoming queen of the big screen, Catwoman returned to television in the fall of 1992 in Batman: The Animated Series. Adrienne Barbeau voiced the show's Selina Kyle, who debuted in the broadcast premiere episode “The Cat and the Claw.” The animated version of Catwoman borrowed heavily from her Bronze Age incarnation, with the Feline Fatale sometimes portrayed as an ally, while at other times an enemy. Barbeau’s Catwoman had blonde hair like Pfeiffer’s Catwoman, but she didn’t share the unhinged intensity her big screen counterpart displayed. The animated Catwoman was cunning and graceful. An animal rights activist, she proved a strong match for the Dark Knight.

Over in the comics, Selina enjoyed the spotlight of the prestige format one-shot book Catwoman Defiant, and a feature story in Showcase ’93 #1-4. The Showcase tale leaned into Selina’s antihero status, as the cat burglar protected her neighborhood from a crimelord named Baracuda. Selina might be a thief, but she wasn’t going to sit back and let her town succumb to gang violence. 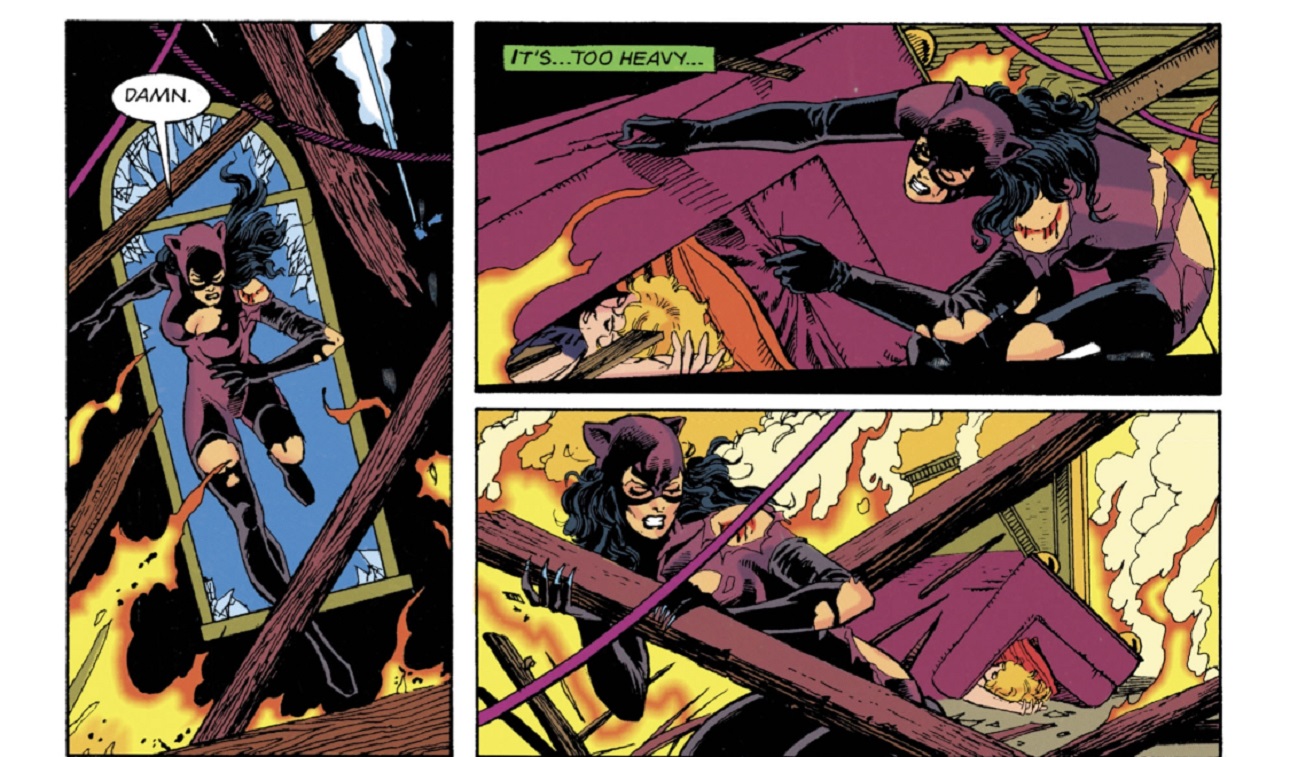 In Batman #498, Catwoman was given a new purple outfit, which became her signature look for most of the 1990s. In the middle of the "Knightfall" crossover event, and Bane took over Gotham’s underworld, and tried to hire Catwoman to expand his criminal empire. Which led to Selina finally getting her own monthly comic. Catwoman #1 hit the stands in 1993, giving the Feline Fatale the honor of having her own ongoing series before other Bat allies like Robin, Nightwing, or Batgirl. A good chunk of Catwoman’s series was penciled by Jim Balent, whose stunning illustrations of the sleek Selina became some of her most iconic images of the era.

Catwoman spent most of her series planning elaborate heists, going on international adventures, selling her services to the highest bidder, and dodging law enforcement. The Dark Knight rarely appeared in her title, giving Selina a chance to define herself as a character outside of his shadow. Even when Selina participated in Batman family crossovers, like "Legacy," she mostly kept to herself, operating as a free agent. 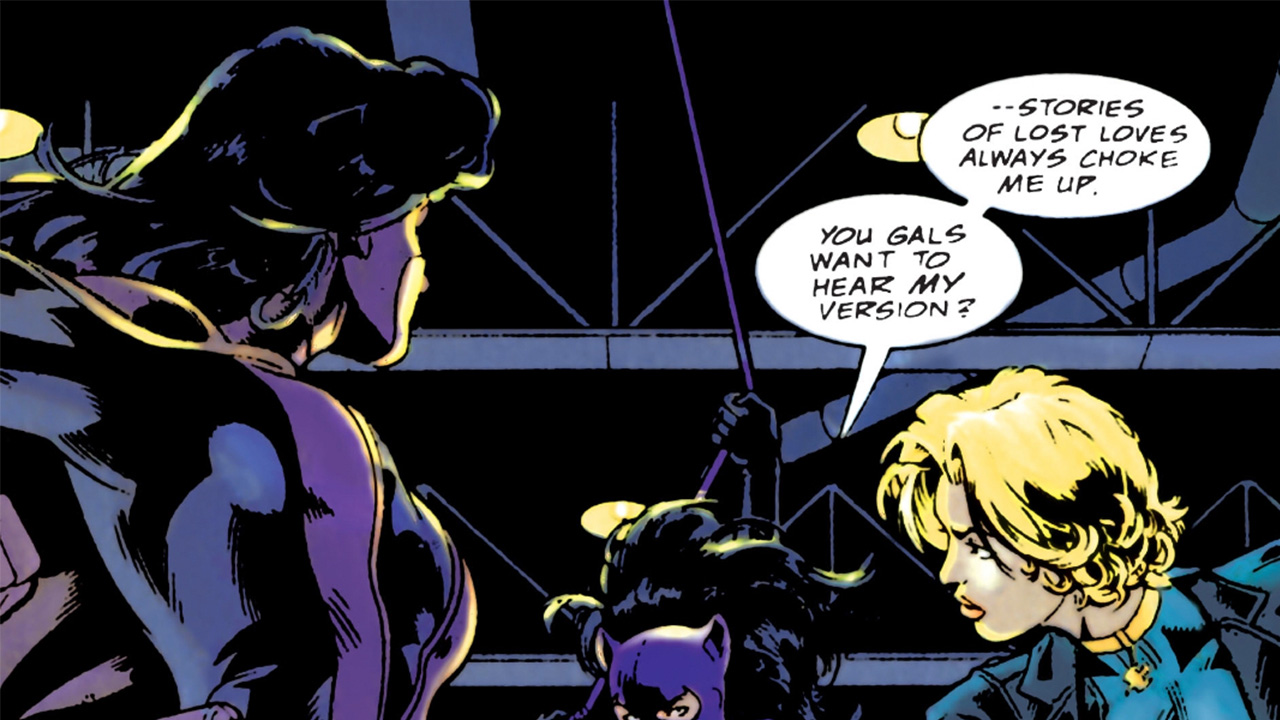 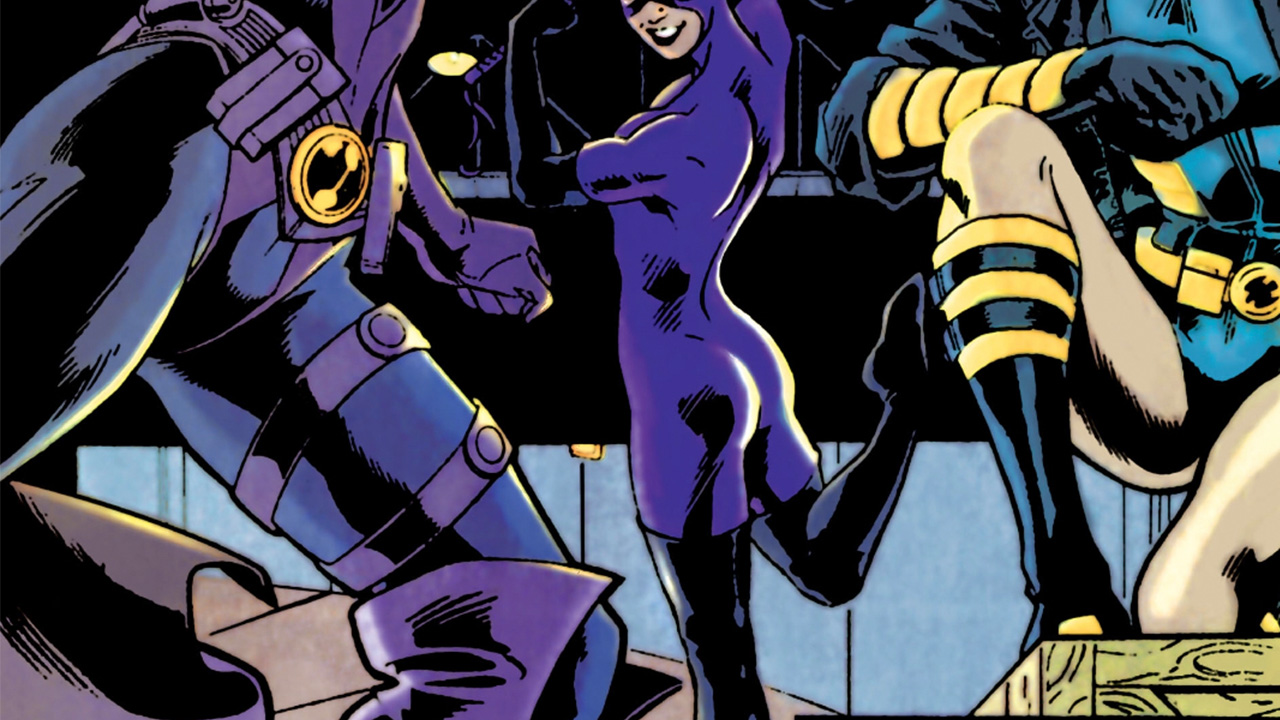 In 1996’s Robin #28 Catwoman showed the Boy Wonder her heroic side when she helped him take down a hostage situation, but told him to keep it to himself. The Feline Fatale had a reputation to protect.  By the mid-90s, Catwoman had settled into her reputation as an antihero and as the “bad girl” of Gotham’s vigilantes. When she teamed-up with Huntress and Black Canary in Birds of Prey: Manhunt #1-4 , Selina was the “bad influence” of the group, and one whom “mother hen” Oracle didn’t approve of. 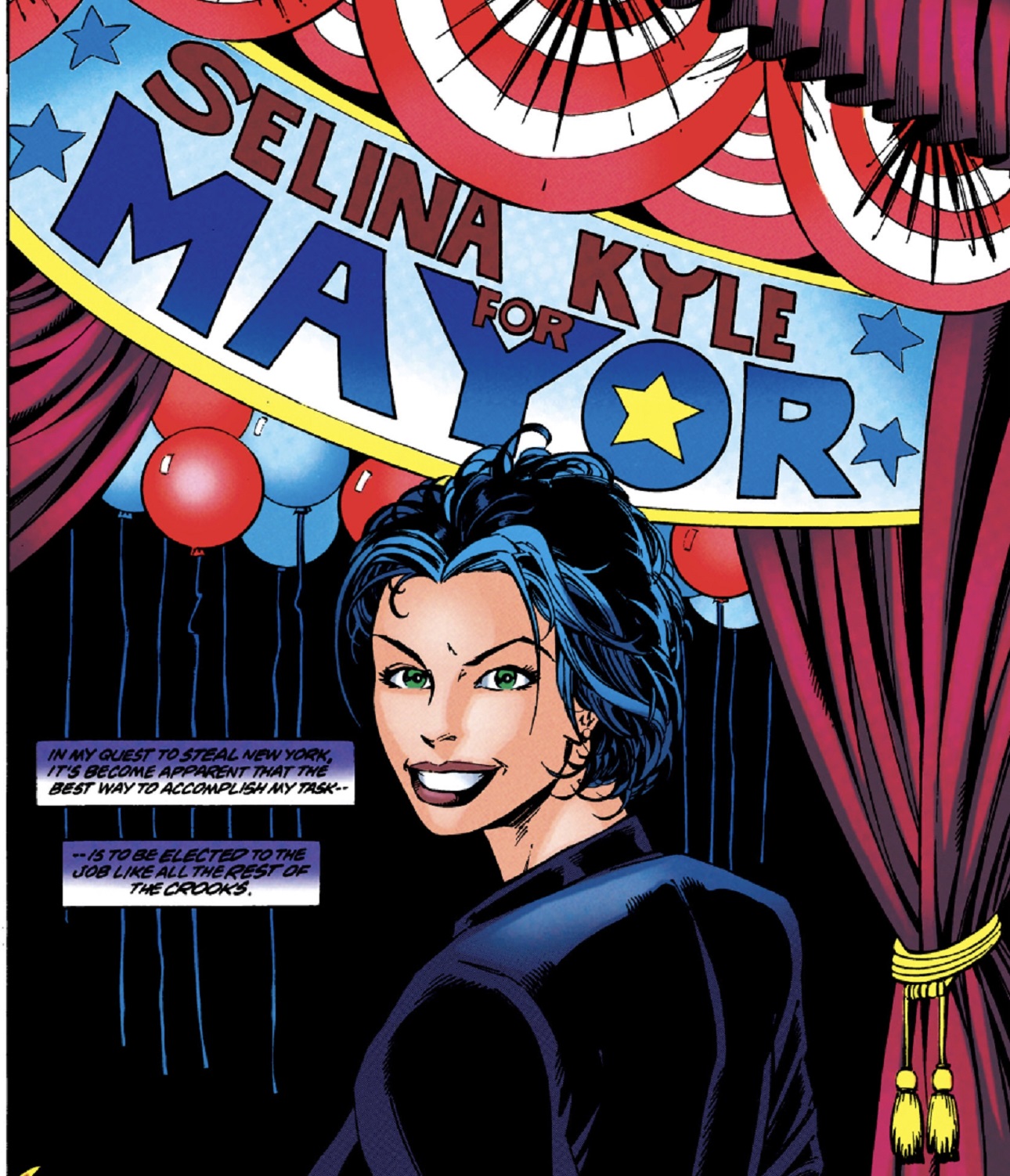 When Gotham was devastated by an Earthquake and declared a “No Man’s Land" by the federal government, Selina tried to start a new life in Manhattan in 1999’s Catwoman #66. She made a name for herself in the Big Apple, working her way up to Vice President of Randolf Industries, and becoming a popular mayoral candidate. When the tabloids unmasked her as Catwoman, Selina faked her death in Catwoman #71, framing Catwoman for the murder. While she assumed this would help her retain her secret identity, Batman and many other heroes were unconvinced.

Selina returned to Gotham, helping the Dark Knight bring the city back from being a No Man’s Land, and making sure she was a thorn in Lex Luthor’s side as he tried to exert his influence over Gotham. In Catwoman #94 Selina approached the Dark Knight, telling him they owed it to themselves to figure out who they were outside of their roles as hero and burglar. Catwoman invited Batman to join her on a trip to Sao Paulo. But the romantic outing was not meant to be. An angry robbery victim had hired Deathstroke to take out Catwoman, and the assassin critically wounded Selina after causing a nearby tanker truck to explode. 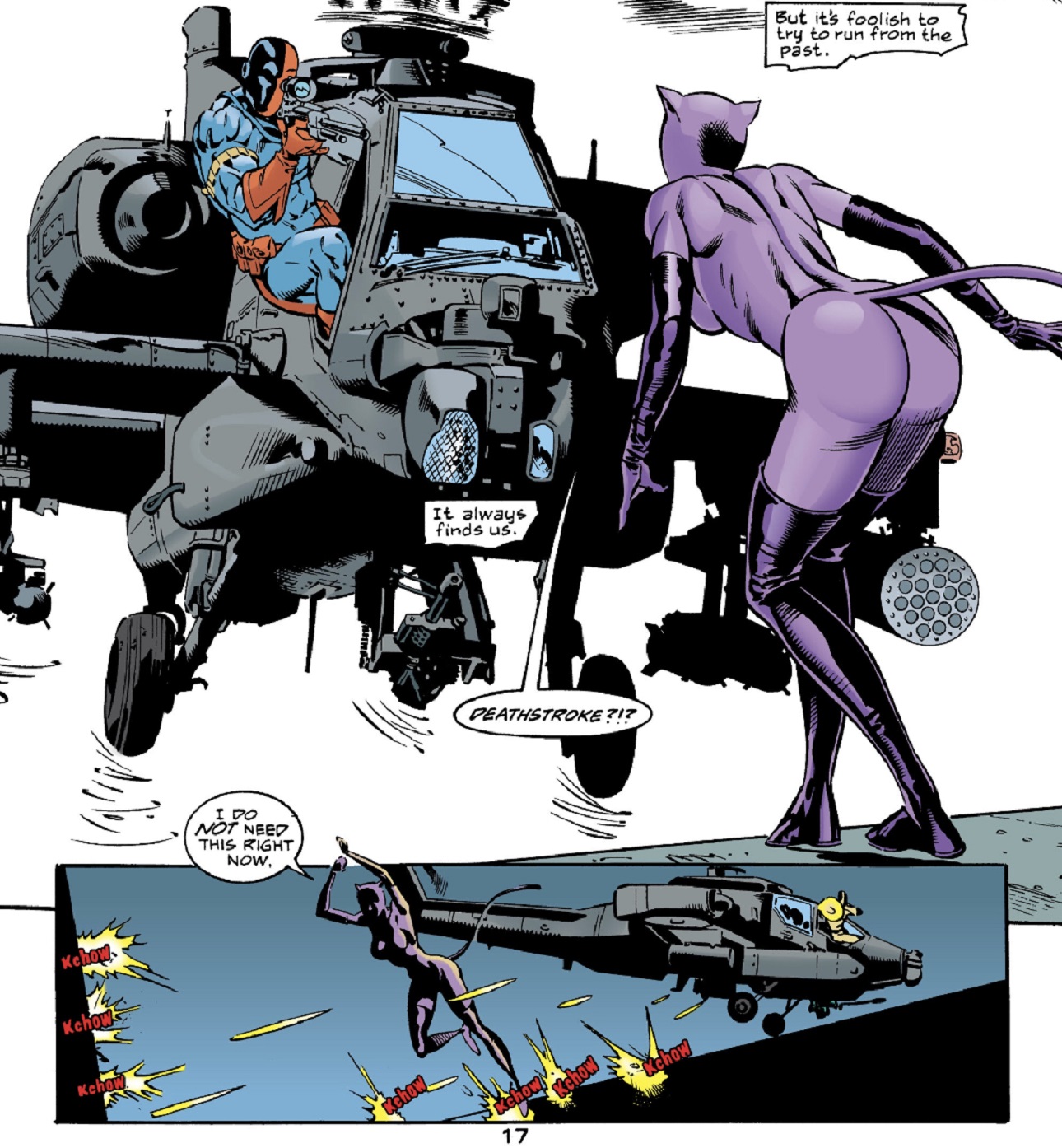 This was the last issue of Catwoman’s first ongoing series, but not the end of her journey. With nine lives, it would take more than a bullet from Deathstroke to give Selina a permanent catnap. Join us tomorrow as wrtiter Ed Brubaker and artist Darwyn Cooke reinvent Selina for the new millennium.

* Birds of Prey: Manhunt #1-4 – Catwoman teams up with Black Canary and Huntress for an international adventure.

Footnote 1: After the reality-altering events of Zero Hour, Selina was given a modified origin in 1994’s Catwoman #0. Her past as a runaway remained intact, but her time as a prostitute was erased. 1995’s Catwoman Annual #2 presented another version of her origin, implying that Selina had only been posing as a prostitute to gain information from her customers.

Footnote 2: Catwoman’s Post-Crisis status quo was a work in progress. Early Post-Crisis stories discussed in our Redemption and Romance article indicate that her identity was publicly known, but this was slowly forgotten. By 1993’s Catwoman #1, Selina stated she had erased her real name from every public database.

Footnote 3: Writer Ed Brubaker brought Holly Robinson back in his 2002 Catwoman run, not realizing she had previously been killed off. Brubaker playfully made fun of his continuity error in Catwoman Secret Files #1.

Footnote 4: Like Catwoman’s secret identity, Bruce Wayne and Selina Kyle’s relationship was undefined in this period. Although early Post-Crisis stories (such as Legends #4) had Batman reference a former partnership with Catwoman, other stories treated them like strangers. Some writers would keep Catwoman and Batman apart as a way to avoid the issue. In Batman #499, Selina Kyle sneaks aboard Bruce Wayne’s private plane, and the two act like they’ve never met before. This is later refuted by Batman: The Long Halloween, which establishes that the couple dated early in the Dark Knight’s career. Nobody ever said love was simple!

What are your favorite Catwoman stories? Let us know in our Community!