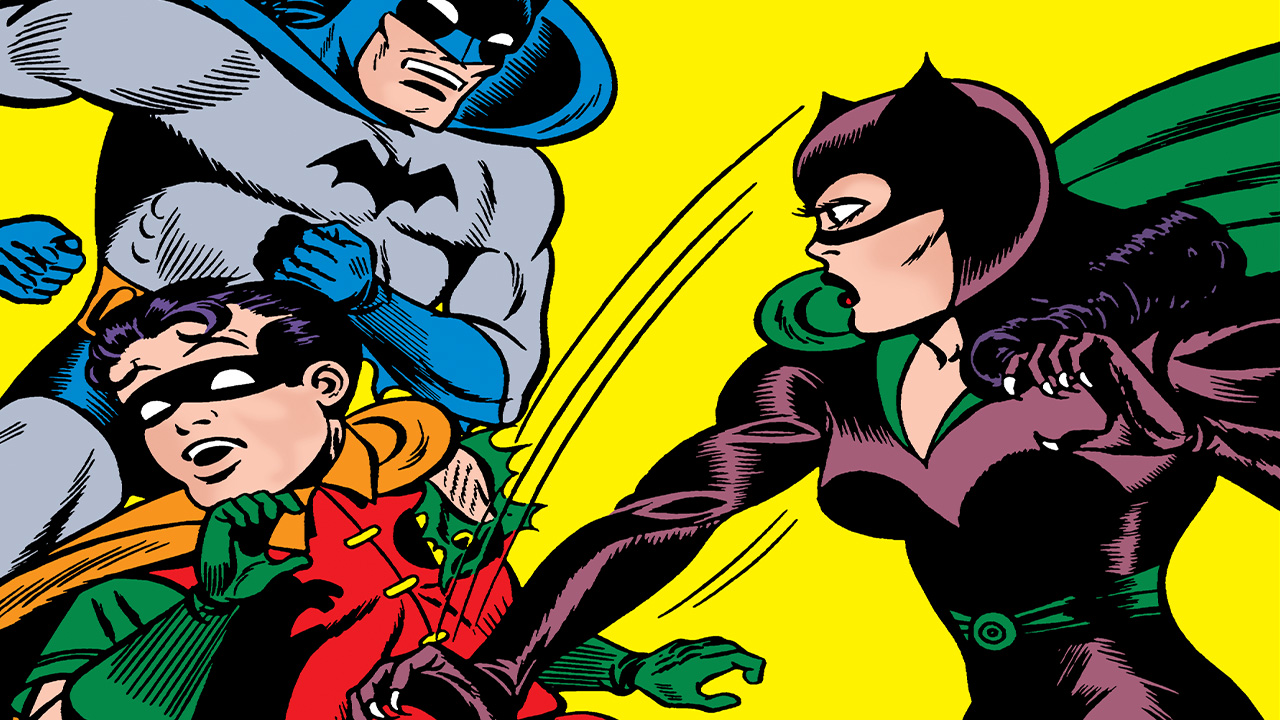 Popular folklore states that cats have nine lives, but it’s possible that Catwoman has more. The crafty Selina Kyle has worn many masks over the years, from burglar to hero, villain to vixen, mentor to mother, and so much more. Time and again, Catwoman has proven that like, her animal namesake, her claws are sharp and she can’t be tamed. All this week we’ll be celebrating Catwoman’s 80 year legacy. Today, we’re kicking things off with a look at her Golden Age roots as a humble cat burglar.

During writer Tom King’s celebrated Batman run, there was a running gag of Bruce Wayne and Selina Kyle arguing about whether their relationship began on a boat or a street. Thanks to our vast comic book library, we can settle the debate and verify that Catwoman’s 80-year legacy indeed began on a boat, specifically a cruise ship -- in 1940’s Batman #1. In Catwoman's first appearance, Batman and Robin learn that the notorious burglar known only as “The Cat” has set her sights on Mrs. Travers priceless necklace. Using some quick detective work, the Caped Crusader is able to deduce that another passenger, the elderly Miss Peggs, is the Cat in disguise. When the Cat’s elderly makeup is removed, Batman is surprised to see a beautiful young woman. The Dark Knight is so taken by the Cat’s beauty, that he pretends to “accidentally” let her get away, a move that didn’t escape an exacerbated Robin’s attention.

Looking at Catwoman’s introduction, it’s surprising to see how it establishes so much about her character, without using any of her later bag of tricks. The name Catwoman isn’t used, nor is the name Selina Kyle, and the Cat doesn’t wear a costume, or use a whip or claws. Despite this, the story presents her as a crafty cat burglar and showcases her talent for disguises. The Cat is confident, flirtatious, and ends the story by gaining the upper hand on Batman, in a way no other criminal had before. Though Catwoman lack's some of her iconagraphy here, this story established the Feline Fatale as she is today. And for a story first published in 1940, it's aged pretty well.

During her second outing in 1940’s Batman #2, the Cat was renamed Cat-Woman, and she had her first encounter with the Joker. Cat-Woman (also called "Cat Woman" in the story) and the Joker found themselves at odds when they both went after the same box of jewels. This story introduced a new side to Cat-Woman’s personality – her compassion. When the Joker was about to kill Robin, Cat-Woman offered Joker her jewels if he'd agree to let the boy live. This became a core part of her characterization. Because while Cat-Woman is a ruthless thief, she's no murderer.

In 1940’s Batman #3, Cat-Woman wore a mask for the first time, but it wasn’t the cowl today's readers are familiar with. Cat-Woman’s mask was an all-too-realistic furry cat-head. The story ends with Batman and Cat-Woman sharing their first kiss, which the Feline Fatale uses as a diversion to stun the Caped Crusader so she can escape him once more. Golden Age stories frequently featured Cat-Woman using disguises to pull off elaborate heists, such as 1942’s Batman #10 -- in which she disguised herself as socialite Marguerite Tone and threw a series of high-society parties. At these parties, Marguerite would send her eccentric guests on scavenger hunts, while she robbed their homes. Golden Age Cat-Woman made thievery a game, and it was a game she excelled at. When the Caped Crusader caught her, Cat-Woman repeated the “kiss and escape” trick -- something that would never work for the Joker.

By 1943’s Batman #15, the hyphen was dropped from Catwoman’s name, as the Princess of Plunder met Bruce Wayne for the first time. While judging a beauty pageant, Bruce instantly recognizes Elva Barr (see Footnote 1 below) as Catwoman, and the two instantly fall for one another. Batman concocts a plan, as Bruce Wayne he’ll romance Elva, hoping it will convince Catwoman to give up her life of crime.

Before long, the papers announce their engagement, which baffles Bruce Wayne’s girlfriend Linda Page, who wasn’t informed of the plan. Just how far was Bruce planning on taking this plan? The honeymoon? Their 10th anniversary? Either way, Catwoman learned the romance was a ruse, and struck back with fury. But Batman was able to stop her crime spree, and for the first time the story ended with Catwoman behind bars.

You can’t keep this cat caged, and the Feline Fatale returned in 1944’s Batman #22 with another cunning plan. In her disguise as Belinda she began romancing the servants of Gotham’s elite, tricking her admirers into revealing blind spots in their employers' security systems. Alfred fell hard for sweet Belinda, but by the end of the story he was able to stop her while he was disguised as Batman. When Catwoman returned in 1946’s Batman #35 she ditched the creepy realistic cat mask, and replaced it with a purple cat-cowl. The cowl, along with the purple jumpsuit and green cape, would evolve a few times, but it became Catwoman’s signature look for years to come. Interestingly this story gave Catwoman blonde hair. So Batman Returns' Michelle Pfeiffer wasmtrue to comic book canon all along!

1947’s Batman #39 introduced Catwoman’s signature weapon, her cat-o-nine tails! Over the years the weapon would evolve into a more traditional whip, and now Catwoman is rarely seen without it. In this story, Catwoman used it to stun the Dark Knight, and she had no trouble turning it on her own men to remind them who was boss. By Detective Comics #122, Catwoman returned to her traditional black-haired look, and added a Kitty Car to her arsenal in order to keep up with the Batmobile.

Catwoman continued her crime spree throughout the Golden Age, until things took an interesting turn in 1950’s Batman #62. Although Catwoman was a feral fireball, she never had murder in her heart. So when Batman was almost crushed by falling bricks, the Feline Fatale rushed to his rescue. The debris landed on Catwoman’s head, knocking her out and forcing the Dynamic Duo to take her to the Batcave for treatment. When Catwoman awoke she appeared dazed, saying she was a flight attendant named Selina Kyle, and that the last thing she remembered was hitting her head during a plane crash.

The Dark Knight deduced that Selina had suffered from amnesia, which caused her to turn to a life of crime (see Footnote 2). Now that her amnesia was cured, Selina stated she had no reason to continue her criminal career. This story contains a few firsts for Catwoman. It marked the first time readers learned the name Selina Kyle, the first time Catwoman visited the Batcave, and the first time Selina reformed. Catwoman was never the deadly villain the Joker was, and she always held great affection for Batman, so her evolution into a part-time heroine felt natural.

Selina Kyle opened up a pet shop, and occasionally suited up as Catwoman to help the Dynamic Duo fight crime. In 1952’s Batman #69, Selina convinced her brother Karl Kyle to give up his villainous identity as the King of Cats. A leopard doesn’t change their spots overnight, however, and Catwoman’s first tenure as a hero didn’t last long. By Detective Comics #203, Catwoman was tired of feeling domesticated and returned to her criminal life. Selina wanted to prove that nobody, not even Batman, could cage her.

1954’s Batman #84 is amusing because Selina pulls her biggest flex yet, and gaslights Batman into believing he can’t prove she was ever Catwoman. The Dynamic Duo bemoan that Catwoman has never been publicly unmasked, or fingerprinted. Did Batman and Robin forget about every other time they faced her?

By 1954’s Detective Comics #211, Catwoman was using panthers, lions, and tigers to intimidate her robbery victims. Selina was fearless around these large jungle predators, proving she was the true Tiger Queen decades before anyone ever heard of Joe Exotic. In this issue's story, Catwoman captured the Dynamic Duo, stripped them of their costumes and tools, gave them jungle garb, and set them loose in the wild so she could hunt them. It was a move that screamed Alpha Female, and a fitting premise for her final Golden Age appearance. The story ended with Catwoman escaping from the jungle in a plane. She wouldn’t be seen again for twelve years.

That’s it for Catwoman’s Golden Age capers. Join us tomorrow, when Selina returns from an extended absence to remind Batman just how sharp her claws are!

Footnote 1: With hindsight, we know that Selina Kyle is Catwoman’s birth name, but when Batman #15 was published, there was no way of knowing if Elva Barr was an alias or if it was truly Catwoman’s real name. While it’s possible writer Jack Schiff intended for Elva Barr to be her real name at the time, we’ll never know for sure.

Footnote 2: In The Brave and the Bold #197, Catwoman’s Earth-Two counterpart confessed that the amnesia and flight attendant story had been a ruse. While it’s never explicitly confirmed that her Earth-One incarnation was also lying, overwhelming evidence suggests she was. For example, Selina was eager to return to crime, and her entry in 1985’s Who’s Who #4 says she became a burglar out of boredom, making it safe to assume the flight attendant story was a fabrication in all realities.

What are your favorite Catwoman stories? Let us know in our Community!