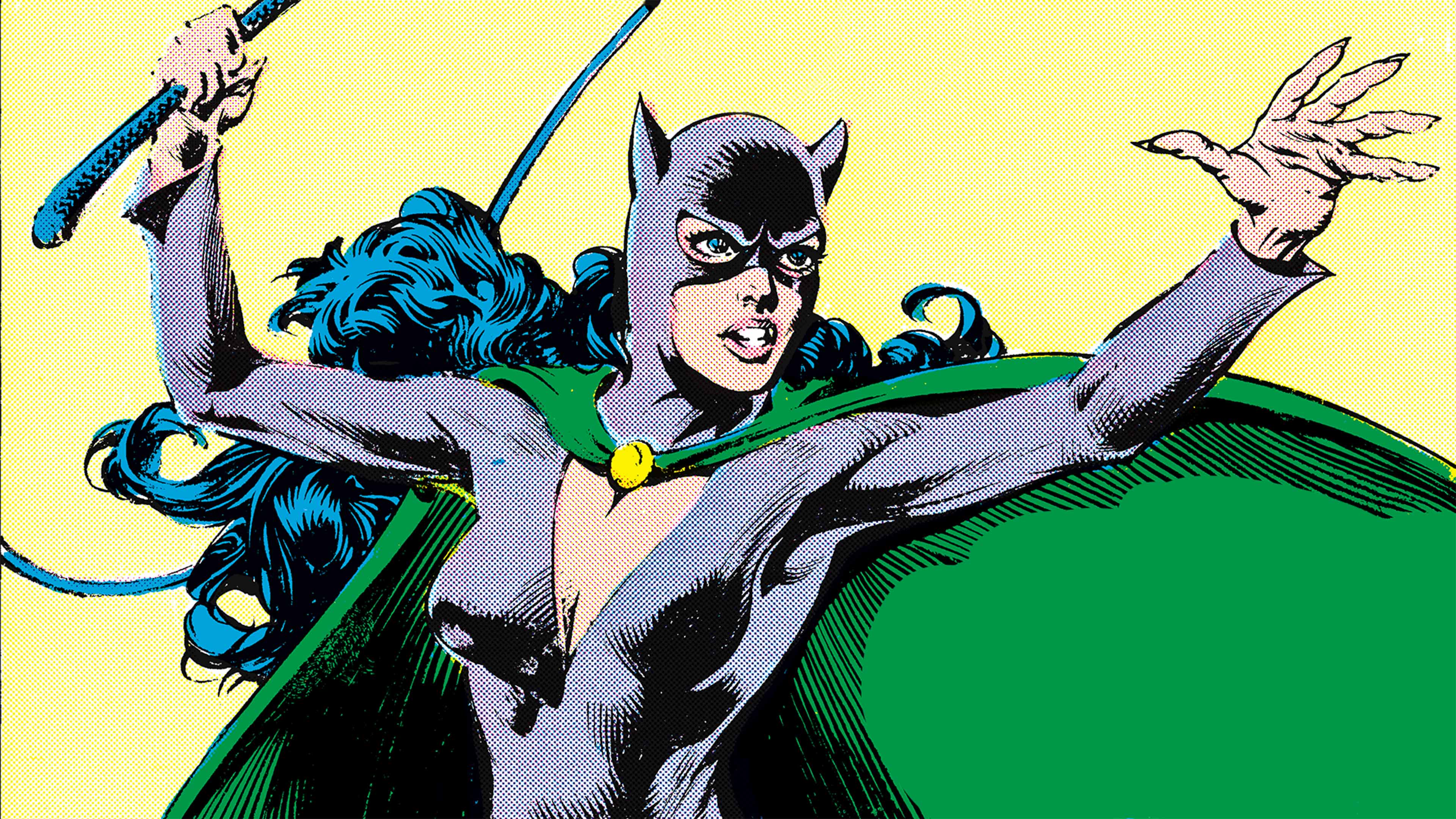 Our celebration of Catwoman’s 80th anniversary continues, as we spotlight Selina Kyle’s career from cat burglar to hero! Earlier this week we took a look at her Golden Age beginnings, and her Silver Age comeback, now it’s time to dive into the Bronze Age, where Catwoman found romance and redemption.

By 1979 the Batman titles, and the greater DC Universe in general, were being written in a more serialized fashion. In previous years, most stories were self-contained, and although some books had multi-part stories, it was rare to see subplots develop and play out. Now it was a new medium, with comics no longer being seen as disposable entertainment. Creators knew fans were following these characters for years, and rewarded their reading experience with serialized subplots. In addition to reading about Batman’s rooftop adventures, fans also kept up with Lucius Fox’s business dilemmas, or Jim Gordon’s fight against a corrupt government, and Bruce Wayne’s relationship with Selina Kyle.

In Batman #308 Selina Kyle stopped in to see Bruce at his Wayne Foundation office, looking for a good way to invest her money. Selina insisted that she was paroled, looking to put her criminal life behind her, and that the money came from a family inheritance. Bruce was hesitant, familiar with Selina’s fake rehabilitations from the past, but he took a chance. He agreed to help her, and their business talk soon shifted to romance. By Batman #313 the two were dating, and things were hot and heavy. 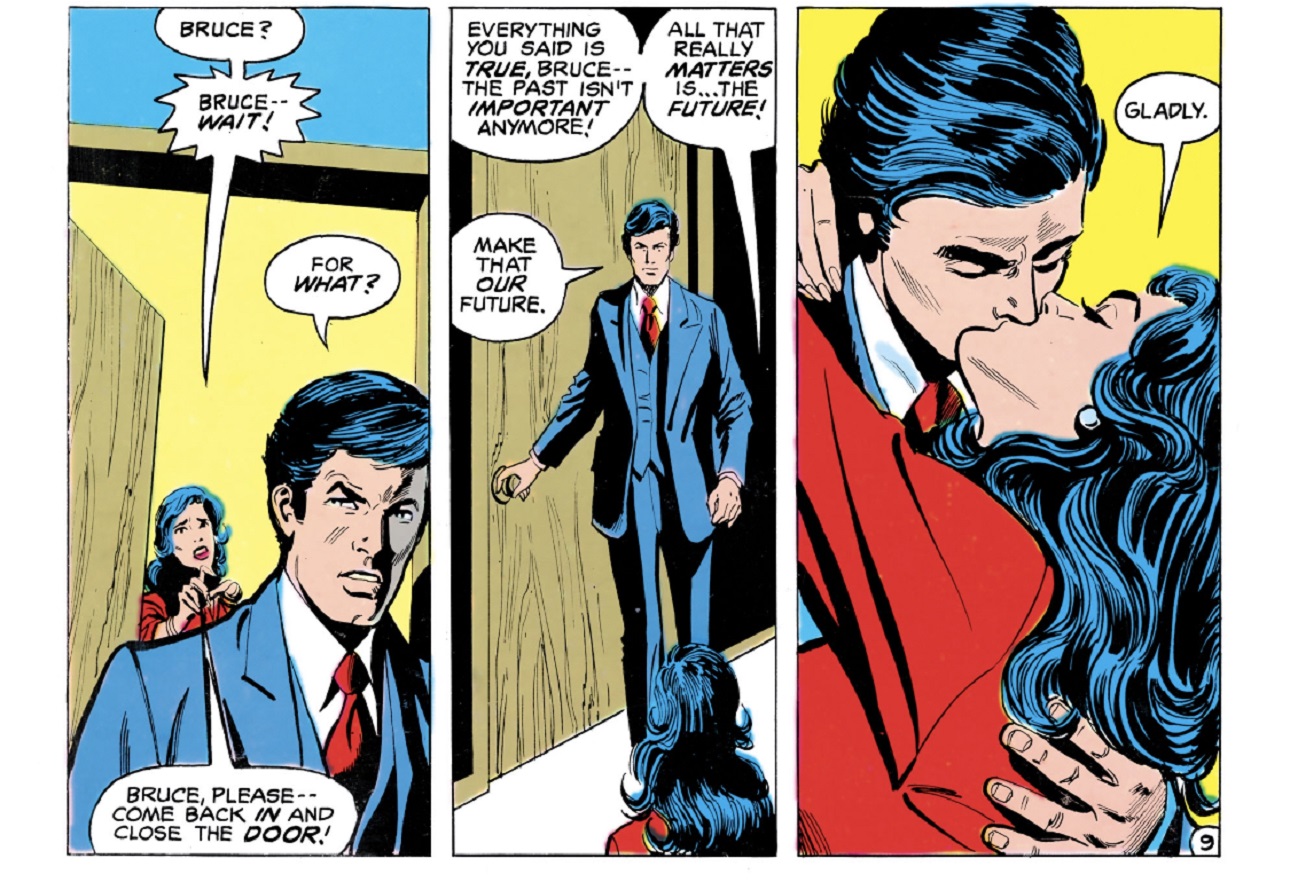 With the benefit of serialized storytelling, readers got to see Bruce and Selina’s relationship develop and overcome obstacles in a way that wouldn’t have been possible years earlier. In Batman #314 Selina was angered when she found out Bruce had Lucius investigate her, which led to a big fight in Batman #315, followed by a steamy makeup in Batman #317. The comic creators were too polite to show us how their reconciliation went, but the smile on Bruce’s face seems to say it all.

Their relationship was also plagued by Bruce’s worry that Selina would discover his secret identity, or that she would slip back into crime. Selina also struggled with putting her criminal past behind her, feeling that she was constantly being reminded of her Catwoman days. It was a regular Bat-Soap Opera, and things got worse when Selina began getting mysterious headaches in Batman #318. In true daytime television fashion, it was revealed that Selina had contracted a rare tropical disease, and the only cure was rare herbs found in a museum exhibit. 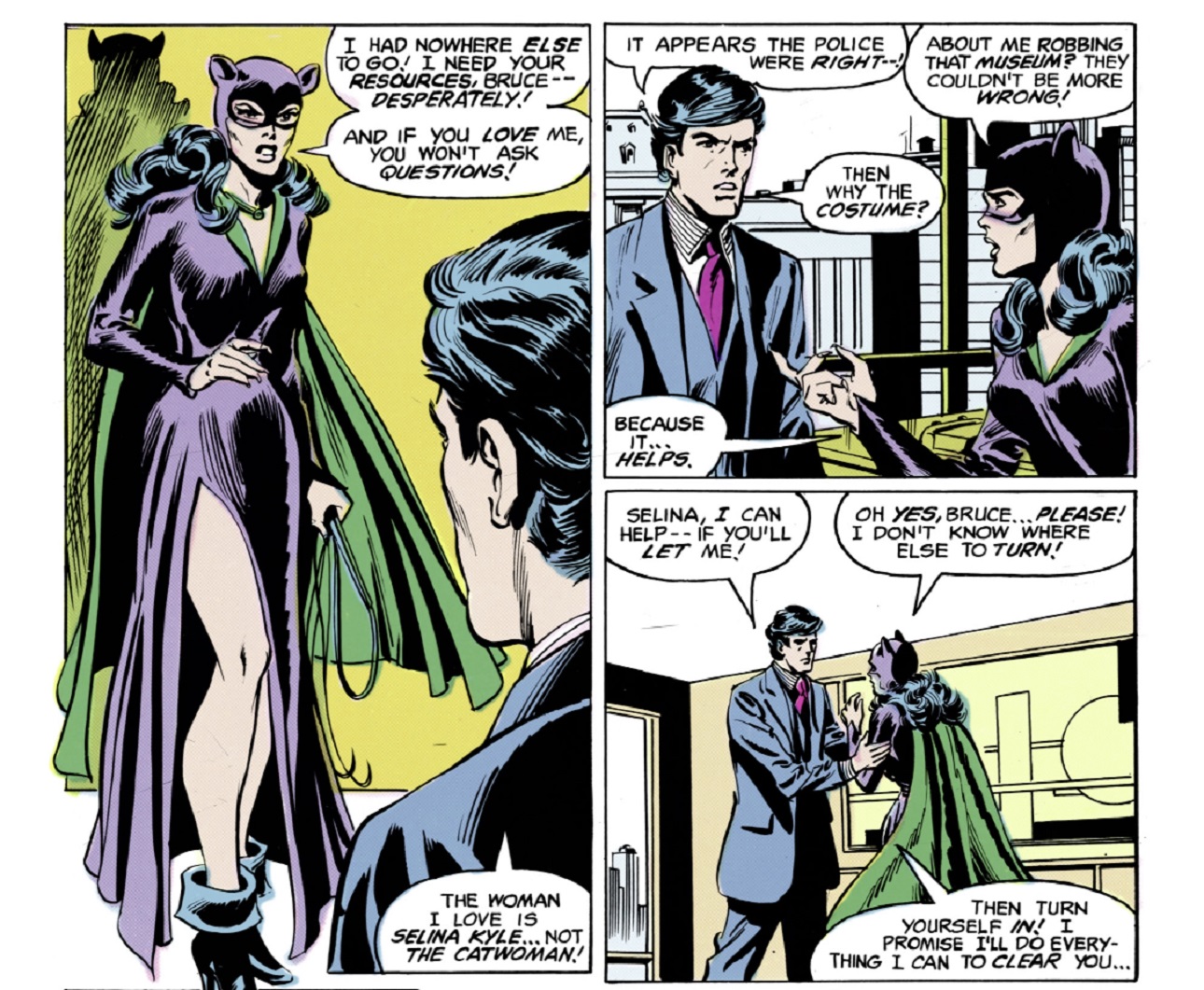 When the artifact was stolen by someone in a cat costume, everyone suspected Selina, even Bruce. Selina was heartbroken that her beau didn’t have faith in her, and suited up as Catwoman again to catch the real culprit in Batman #323. Batman came to Catwoman’s aid, and the duo discovered that Cat-Man was the true thief. Batman was able to stop Cat-Man and cure Catwoman in Batman #324, but he couldn’t undo the damage to Bruce and Selina’s relationship. In Batman #326 Selina left Gotham and broke up with Bruce, telling him that he should have believed in her innocence. Although the focus of the story was Bruce’s reaction to the breakup, it’s interesting to look at Selina’s struggle. The former cat burglar is desperately trying to put her criminal past behind her, but nobody seems to be letting her, even the man she loves. 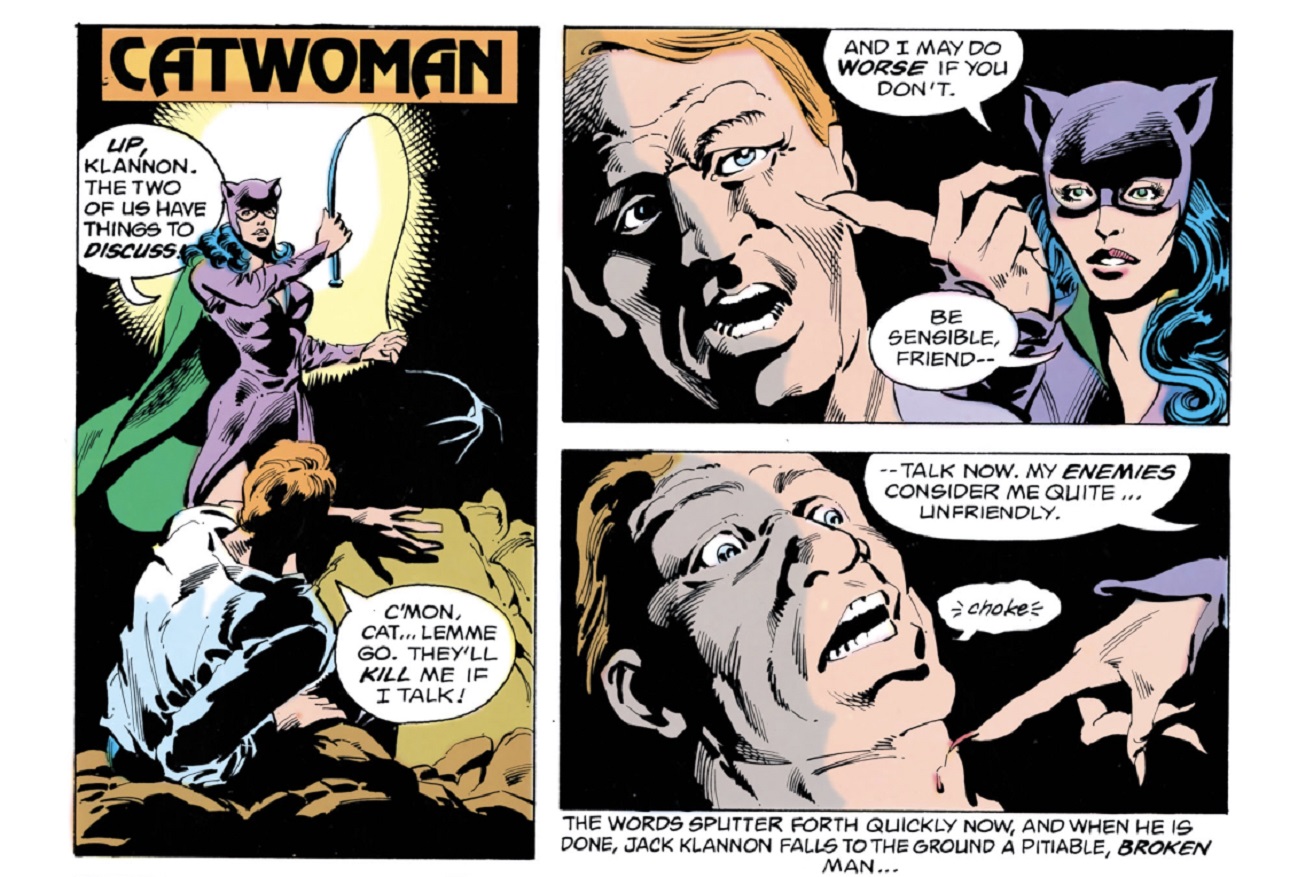 Catwoman’s next appearance was in Batman #332, when Robin recruited the Feline Fatale to help him stop Talia Al Ghul. The Boy Wonder was worried about the influence Talia had over Batman, and decided to go to the Dark Knight’s ex to snap him out of it, which is kind of a jerk move. Despite Dick’s jerk move, the comic was a major milestone for Catwoman, who got her own solo backup feature for the first time. Selina had spent years as a villain, a love interest, and a supporting player, and now she was finally given her chance to be the protagonist. The backup tale followed Catwoman as she investigated Talia, and partially dismantled one of her criminal schemes. 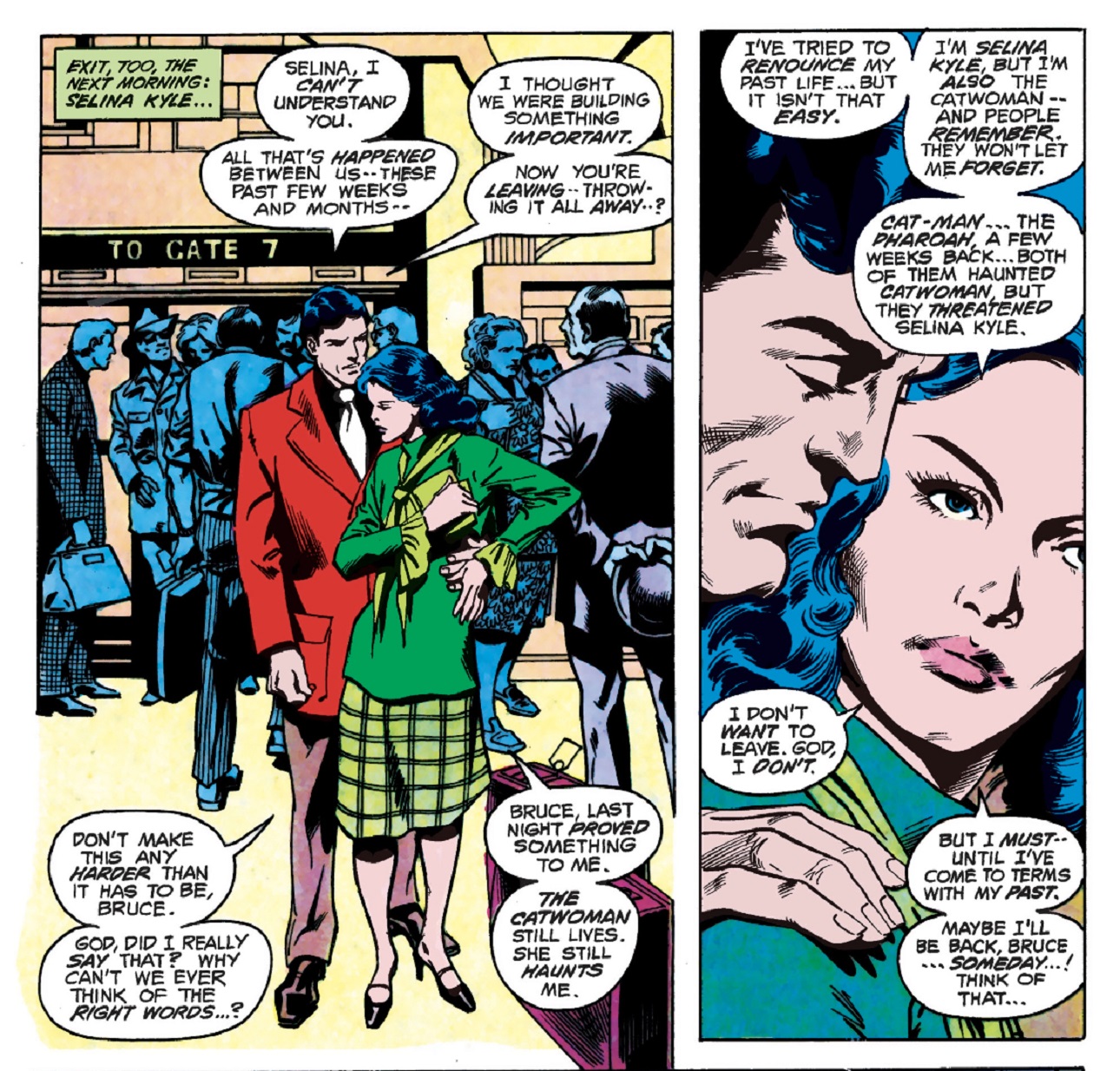 Selina Kyle reappeared in The Brave and the Bold #176, telling Bruce that her long lost sister Felicia was in danger. Although Batman tried to aid Selina’s sister, a hitman snapped her neck before the Dark Knight could rescue her. Truly the saddest Bye Felicia in history. In Detective Comics #508 Selina reached out to Bruce again, deciding that their relationship was worth another shot. The reconciliation was short lived, with Selina breaking up with Bruce again in Detective Comics #509. Too many criminals had targeted Selina Kyle, and she realized that no matter how hard she tried to put her life as Catwoman in the past, it would always be a part of her. Selina told Bruce she needed some space to figure out how to come to terms with her Catwoman past, and what it would mean for her future.

Selina’s departure from Gotham led to a new series of Catwoman solo backups. The stories followed Selina as she tried her hand at being a hero, and explored who she was outside of the world of Gotham. For the first time, her adventures weren’t defined by Batman or another hero. The stories were usually mysteries, like a train disappearance (Batman #345-346), unmasking a political shooter (Batman #348-349), and a locked room murder conspiracy (Batman #350-351). Catwoman was so committed to life as a hero, that she even made sure her former henchmen were on the straight and narrow (Detective Comics #520). 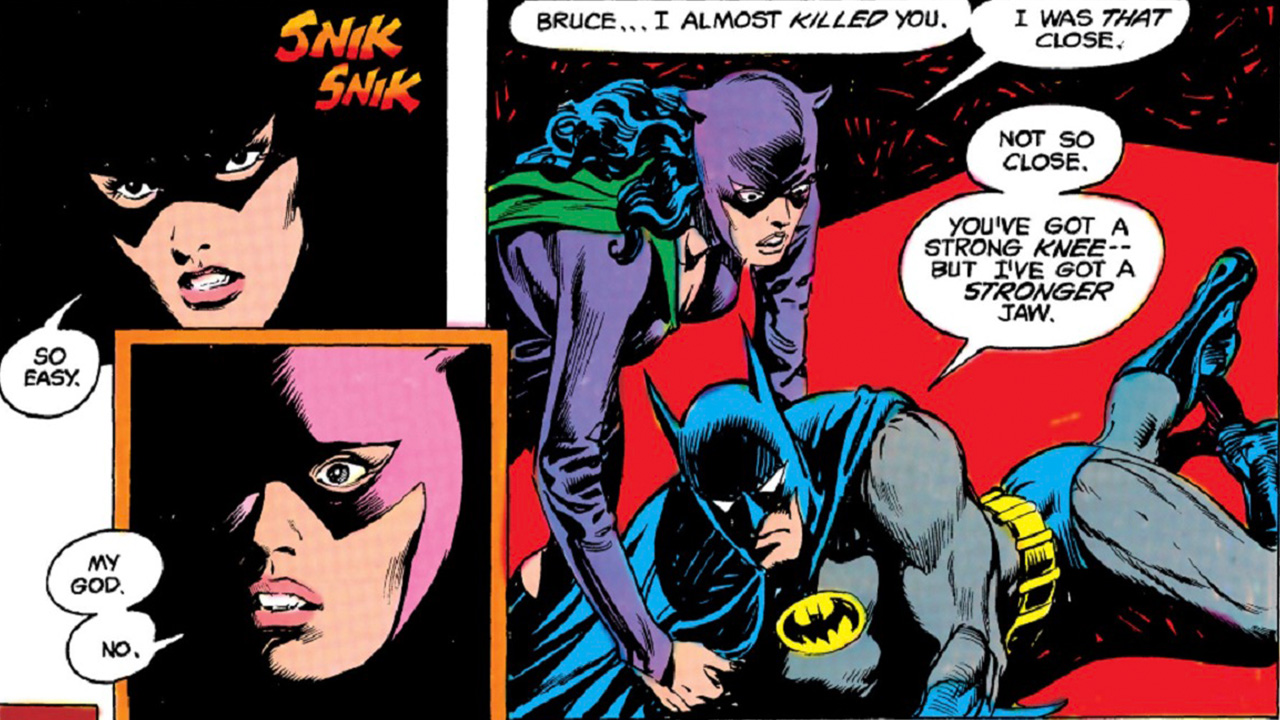 Now that Selina had made peace with her Catwoman persona, she decided to return to Gotham and rekindle her relationship with Bruce in Batman #354. The Feline Fatale was devastated to learn that her ex had hooked up with reporter Vicki Vale during her absence. Catwoman lost her temper, threatening Vicki in Detective Comics #521. Things escalated even further in Batman #355 when Catwoman ran Bruce and Vicki’s car off the road. The Dark Knight confronted Catwoman, and was able to snap her out of her anger. The two apologized for the hurt they had caused each other, and Selina called Batman “Bruce” for the first time, acknowledging that she knew his secret identity (see Footnote 1).

When Selina permanently returned to Gotham in Batman #389, she was throwing herself into one of the most heavy soap opera periods of the Dark Knight’s life. Bruce Wayne had been struggling to salvage his relationship with reporter Vicki Vale, while trying to sort out his feelings for Alfred’s daughter Julia, as the villain Nocturna tried to trick him into marrying her. Bruce was already living up to his playboy image, and now Selina was back in the picture (see Footnote 2). 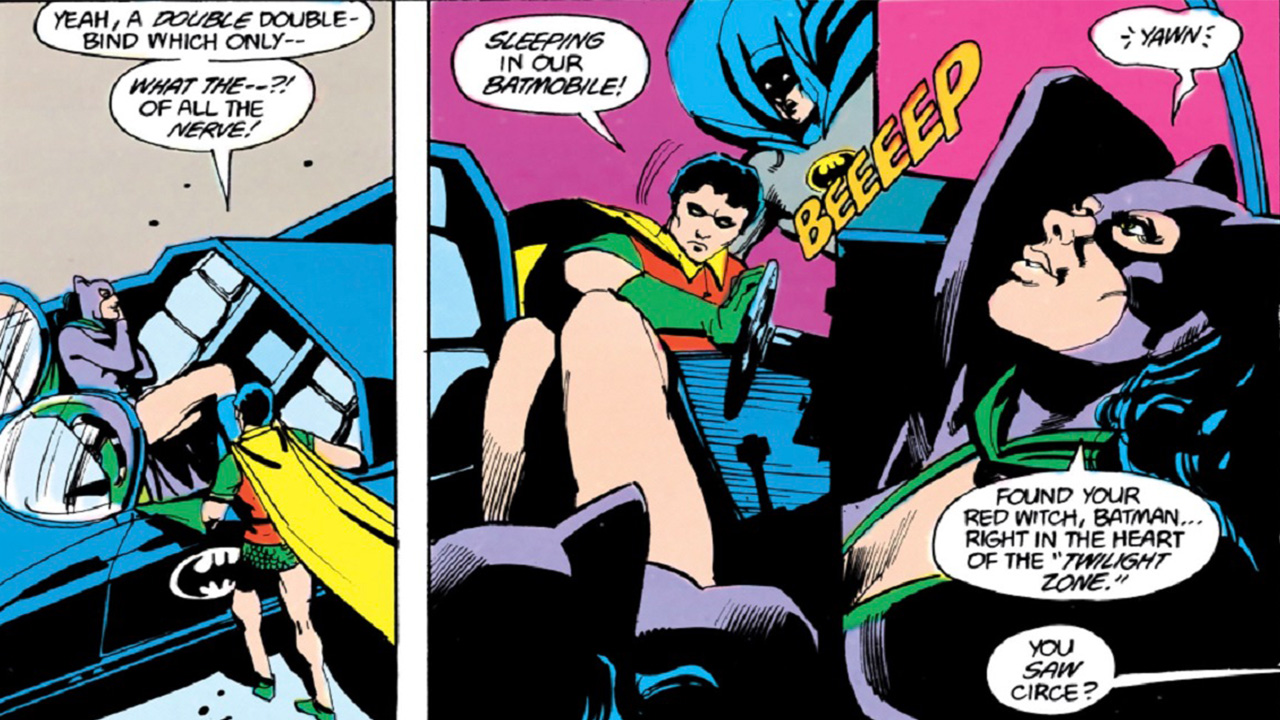 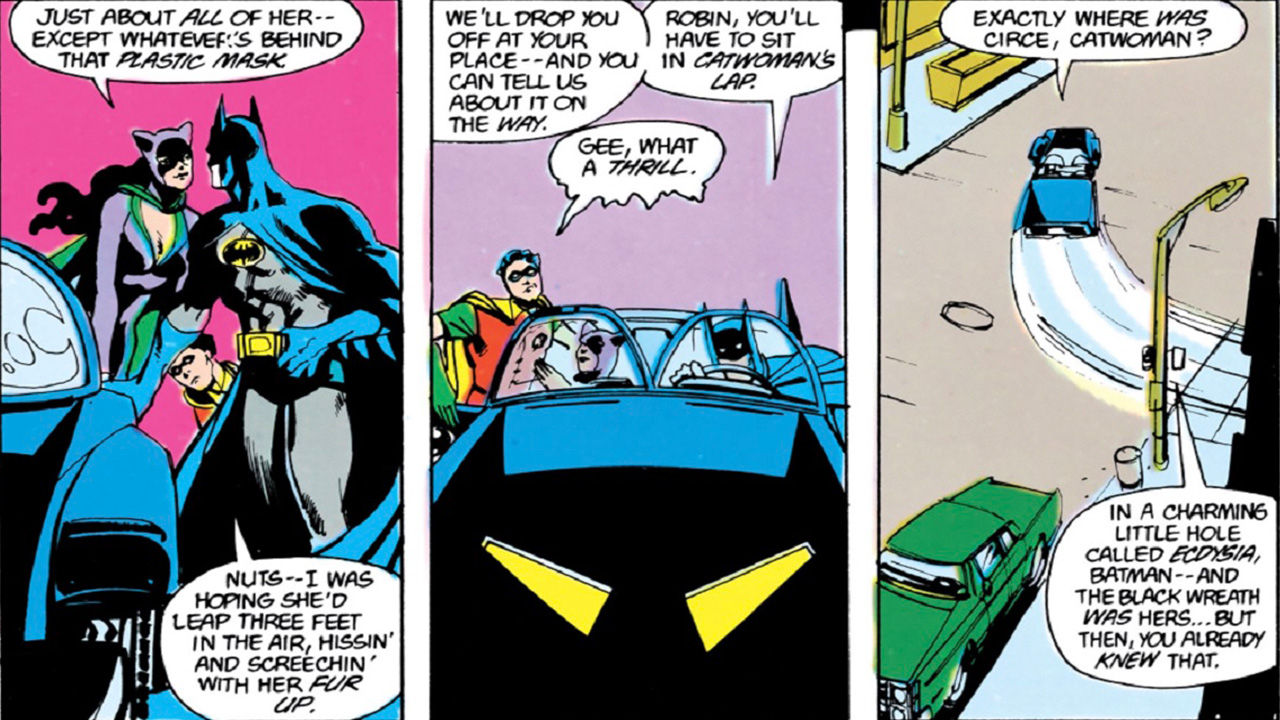 After Catwoman was struck by lightning in Batman #390, Batman sat by her hospital bedside and confessed his love for her in Detective Comics #557. After recovering from her injuries, Catwoman became the Dark Knight’s official partner in crime-fighting and in love in Batman #392. This caused some tension with Jason Todd, who resented Selina for taking his place as Batman’s partner. Robin had viewed Nocturna as a mother figure, and now that she was gone, the Boy Wonder wasn’t ready to let Catwoman into his heart. The former villainous vixen displayed her softer side in Detective Comics #560, when she convinced Jason to open up and share his grief with her.

Catwoman and Batman learned that it’s hard to juggle a romance with a vigilante lifestyle, and their relationship became strained. Crime-fighting put too much stress on their relationship, and Catwoman felt Batman wasn’t treating her as an equal partner. Catwoman ended her partnership and romance with the Dark Knight in Batman #399, but left things on good terms. When Ra’s Al Ghul broke Gotham’s greatest villains out of Arkham in Batman #400, Catwoman was there to help clean up the mess. After years of being one of Batman’s worst enemies, Catwoman had evolved into one of his greatest allies. It was quite a shift from their early encounters, but things were about to change.

In Detective Comics #569-570 the Joker kidnapped Catwoman and hired a mad scientist to scramble her brain. The procedure caused Catwoman to forget Batman’s secret identity and her rehabilitation. The Feline Fatale returned to crime, leaving the Dark Knight heartbroken. Crisis on Infinite Earths had recently given the DC continuity a fresh slate, and it appeared this story might have been written to return Catwoman to an earlier status quo.

Whatever the reason was, Catwoman’s time as a hero had a lasting effect, and it changed her character so much that even the Joker’s brain scrambling couldn’t erase it. While Catwoman went back to being a burglar, she never returned to the levels of villainy she had seen in the 1940’s-1960’s. She no longer set deathtraps, plotted to hurt heroes, or hired burly henchmen. Selina Kyle was back to being a cat burglar, but the previous 8 years of stories meant that she would never be viewed as a villain again, at least in the main continuity. Her years as a hero had redeemed her, and became part of her DNA. The effects of this era continue to be felt to this day.

Join us tomorrow as Catwoman gets a new origin, her own title, a memorable big screen appearance, and more!

* Batman #308 -Selina Kyle begins life on the right side of the law.

Footnote 1: Batman #355 and subsequent issues never addressed how Catwoman learned the Dark Knight’s secret identity. Some comic scholars chalk it up to a continuity error by writer Gerry Conway, but the development makes sense. Catwoman had been in close contact with both Bruce Wayne and Batman for long periods of time, and was romantic with both of them. It makes sense that Selina would have eventually put two and two together without Bruce telling her.

Footnote 2: Selina’s knowledge of Bruce’s identity was handled inconsistently during this period. When Batman took Catwoman to the Batcave in Batman #389, he blindfolded her, a useless precaution if she already knew who he really was. The letters pages of Batman #393 apologized for the continuity error, stating they forgot that Selina knew Bruce’s secret identity. Then editorial reversed course, writing in Batman #397’s letter pages “Catwoman does not know Batman is Bruce Wayne. Never has and maybe never will. Forget what we’ve said in the past and what was done by other writers.” This was abandoned in Detective Comics #559 when Selina showed up at Wayne Manor to join Bruce on a mission, then in Batman #400 Selina was blindfolded in the Batcave again. Detective Comics #569 followed that up by giving Selina knowledge of Bruce’s identity again. For a more in-depth look on this matter, check out this article from The Batman Universe.

What are your favorite Catwoman moments? Let us know in our Community!