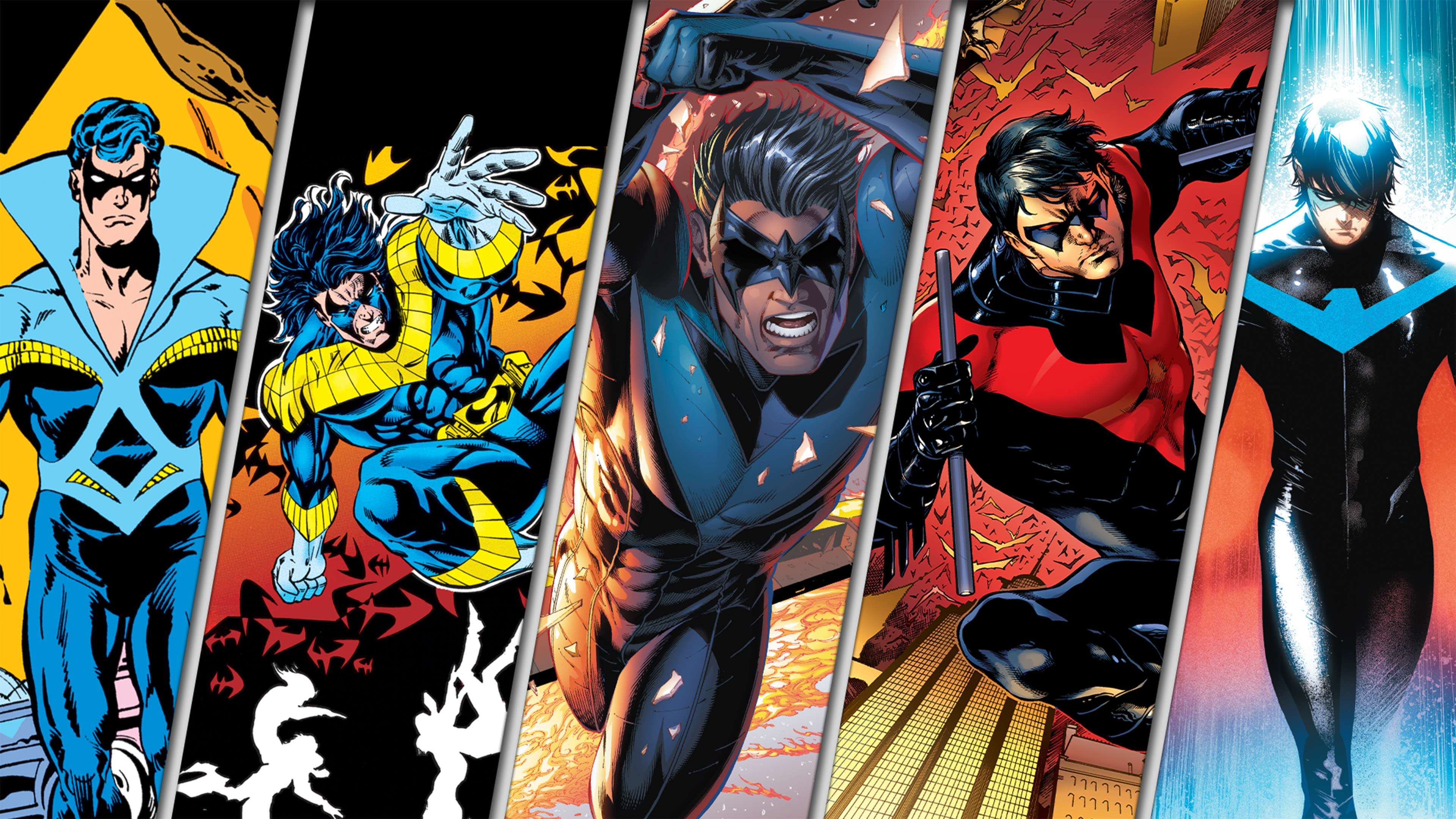 We've waited all season for him, and this week finally marks the reveal of Nightwing -- in the season 2 finale of DC Universe's Titans. Fans, of course, are stoked to see his new threads. So, in celebration of his new lewk, we dug in the back of the closet to put together a fashion show for Dick Grayson, the legendary child of Gotham. From his popped collar to his Bludhaven blues, Dick has been serving vigilante realness for years. Let's look back at the many fashions of Nightwing... 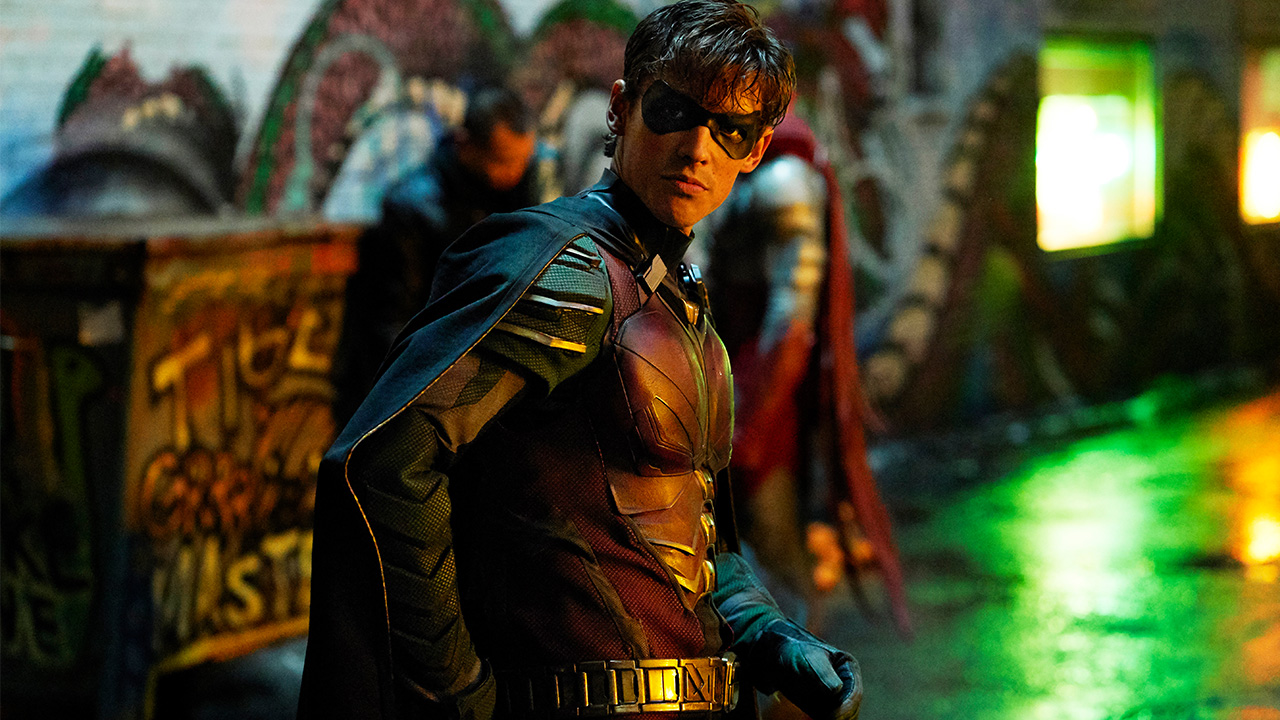 The Lewk: As a precusor to his adult fashion, let's start with just a glimpse at Dick's classic red-breasted look. As Robin, Dick Grayson has gone through many costumes that include everything from pixie boots to green tights, but let’s instead focus on his armored apparel in Titans. Taking a page out of his mentor’s book, Batman of the legendary Haus of Wayne, Dick Grayson’s Robin costume looks battle ready (and battle worn). The armor plating and protective gauntlets are perfect for all manner of fisticuffs as he protects the streets. The costume looks cool and tough with a fun pop of color, the perfect metaphor for Dick Grayson. 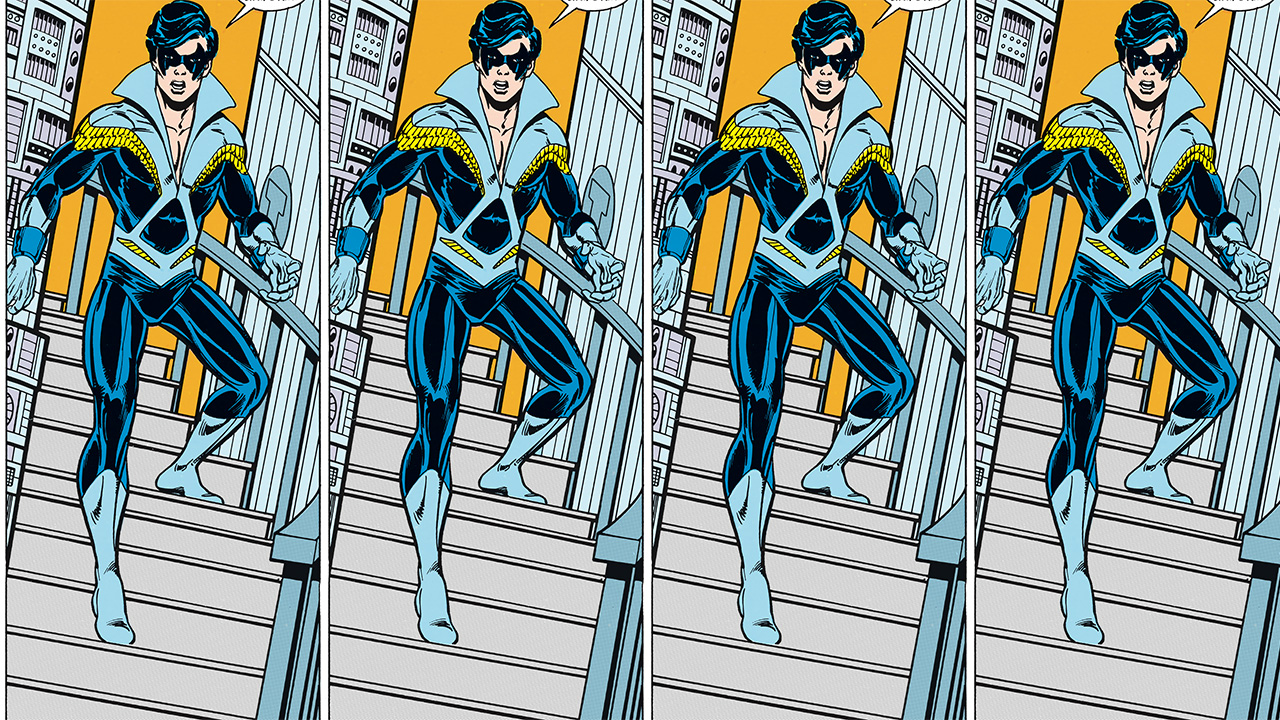 The Lewk: The first appearance of Nightwing was in 1984’s Tales of the Teen Titans #44, in which he donned a costume fit for the discotech, with his baby blue collar popped to the heavens and a V-neck so deep you'd need a scuba tank to reach the bottom. There's a lot happening design-wise, including an "X" pattern on the front highlighted in yellow scales. The color scheme was an odd choice and didn't provide much camouflage for stealth missions (of course neither did the original Robin costume, so *shrug*). It's hard to go back and judge this fairly after seeing the modern Nightwing costumes, but it doesn't even hold a candle to the original Robin outfit.

Verdict: Burn baby, burn...this one belongs in the incinerator!

I AM NIGHTWING (YELLOW) 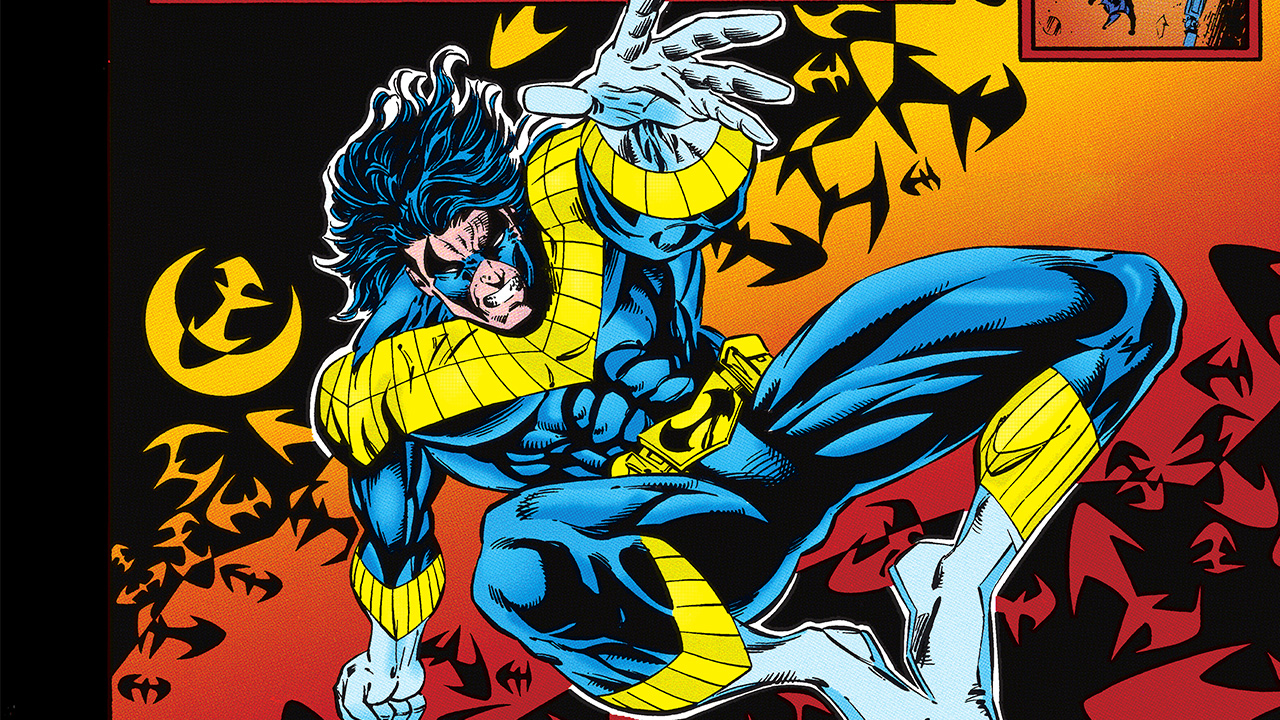 The Lewk: The excess of the '90s were felt throughout all super suits. Too many muscles, giant pouches, and polished chrome graced every hero and villain! '90s Nightwing is no different. His collar was as dead as disco when his fashion choices took a look at the date and decided to catch up. Keeping the elements and color scheme of his previous suit, it's a natural progression—check out that chromed out yellow "V" and that dangerous ponytail! On paper this suit is hideous, but honestly it somehow works in the context and time period. It's just enough '90s without tipping into Magog territory. 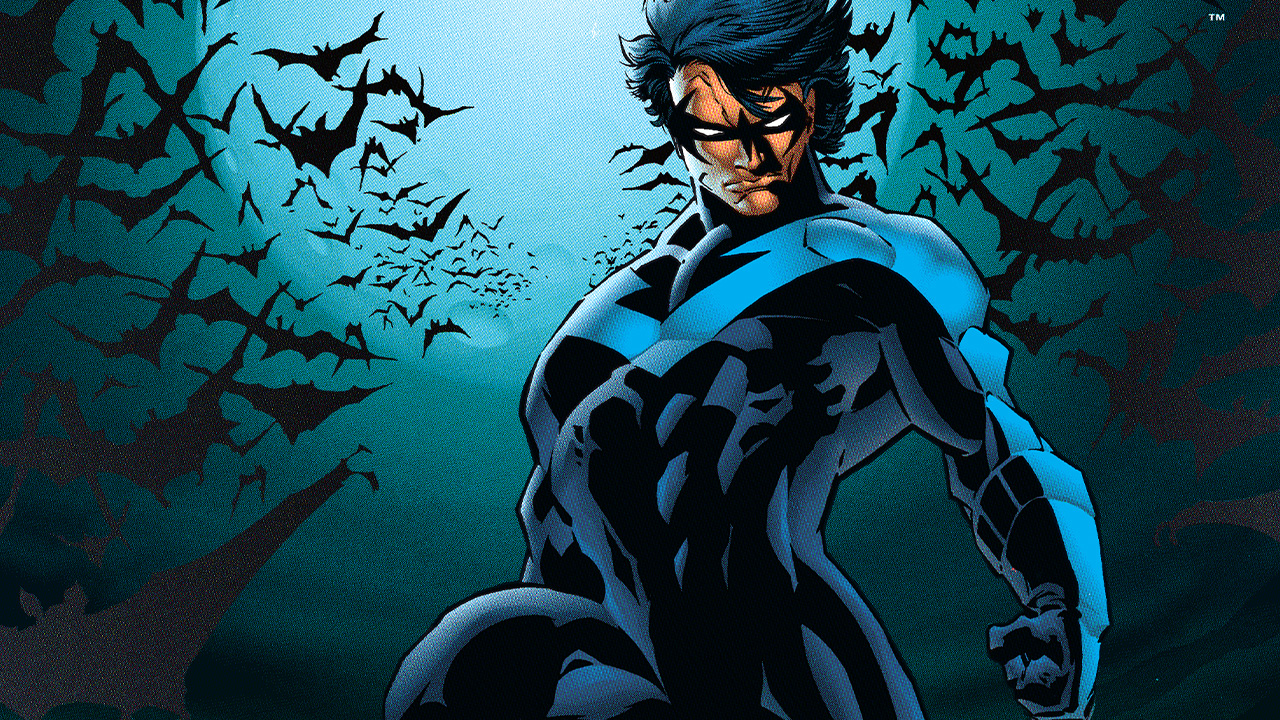 The Lewk: This is the quintessential Nightwing suit. Imagined by Chuck Dixon and Scott McDaniel for Nightwing's first ongoing solo series, the suit instantly became a classic. The blue on his fingertips, up his arms, and meeting in the middle is perfect. It draws the eye and looks both slick and fun, just like Dick! And finally, after decades of bright, bold colors that catch a criminal's eye, Dick finally decided to go for full-on shadowy camouflage. There are few costumes that completely redefine a character’s entire look the first time they're on the page, and this is definitely at the top of the list. Superhero that walk!

PARTY IN THE BACK 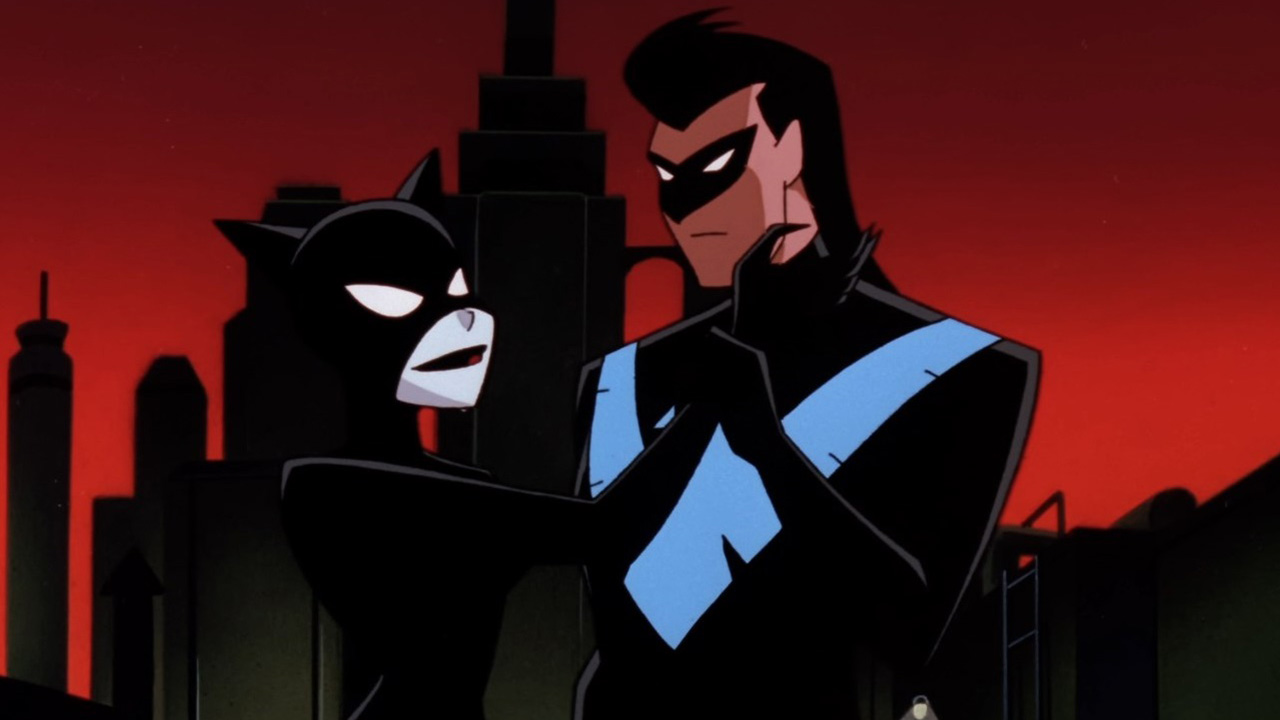 The Lewk: Want to show that you’re out on your own and all grown up? Put a bird on it! Seriously though, this costume from The New Batman Adventures is really awesome and fits in perfectly with the DC Animated Universe look! The bird motif still evokes that Robin feel in a more mature version of the character. An entire generation of Batfans were first introduced to Nightwing in this look and it became an instant classic. But even if the outfit is on point, there's still something birdbrained going on: Dick, what in the name of Vidal Sasson is with that mullet? Sure it’s the '90s, but even then this wasn’t even in style. Just add a leather jacket and a dangling cross earring to create an instant '90s bad boy! No tea, no shade, but that hairdo is a hair-don't, and Catwoman would be well within her rights to snatch that wig right off your head. 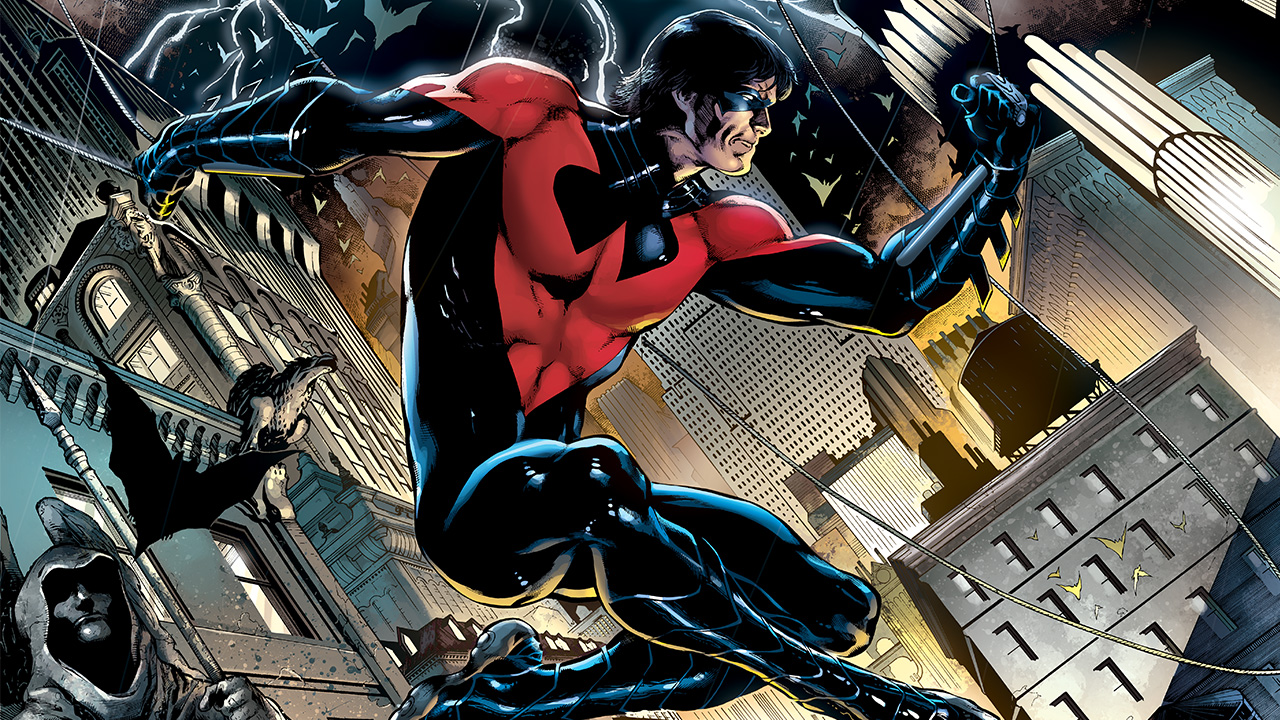 The Lewk: Starting with his New 52 self-titled series, Nightwing ditched his true blues for a radical red. A bit divisive at the time, people have come to embrace the new color scheme that honored his humble Boy Wonder beginnings. Not since 1997's Batman & Robin had we seen a red Nightwing symbol, and the new look fit in with this more aggressive New 52 version of the character. And while we can't get behind a gaudy hero right out of Party City, we always love a pop of color. This crimson-clad hero had the villains seeing red, but the goons of Gotham City wound up black and blue. 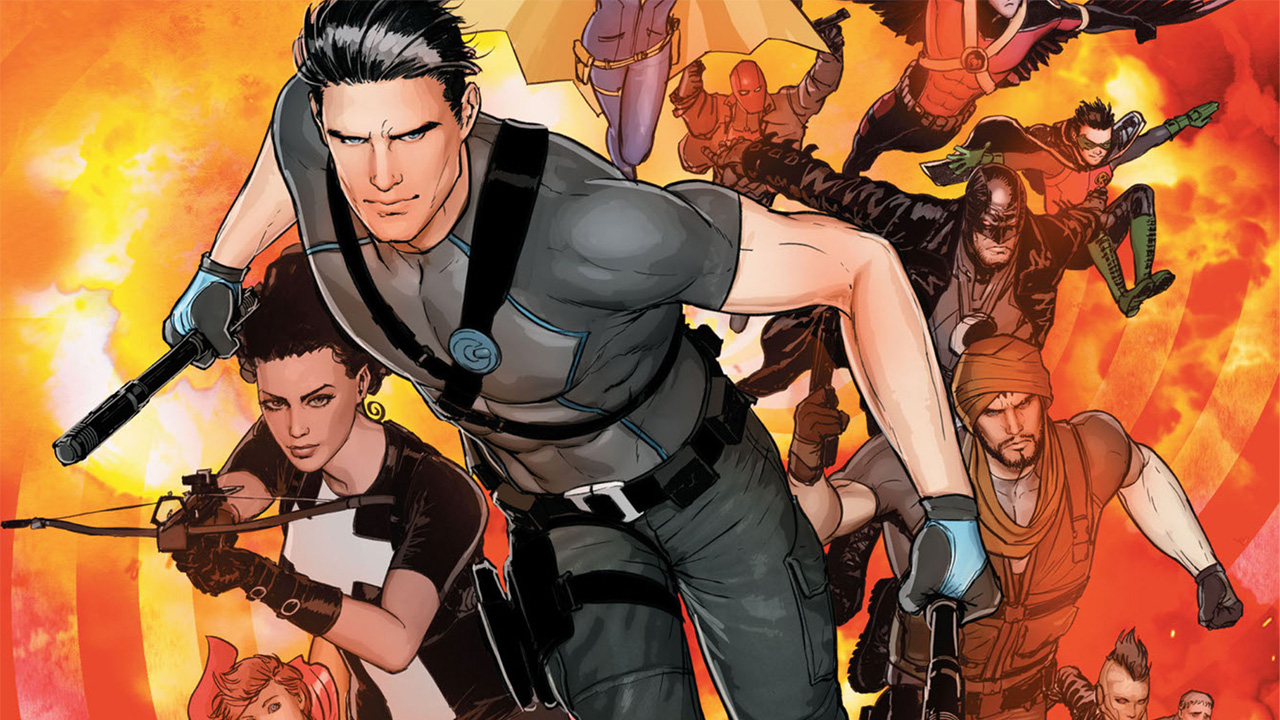 The Lewk: After joining the super-secret organization known as Spyral (get it? Spy-ral…), Dick ditched his Nightwing persona and went back to going by his last name -- Grayson. Wearing a gray-and-white Under Armour shirt, gray pants, and Puma sneakers, Grayson looked like a drab off-brand Ethan Hunt. Although the spy adventures were a beautifully illustrated, well-written departure, they just weren't the Nightwing we'd known known and loved. The storyline was met with hesitation, but became a fun and unique take on the character. Still, no matter how excellent the comic, we need color, fashion, excitement! Fans got their wish when Grayson once again went back to urban crime fighting and squeezed those sweet cheeks back into his traditional Nightwing outfit.

Verdict: Get a tailor, soldier-spy. 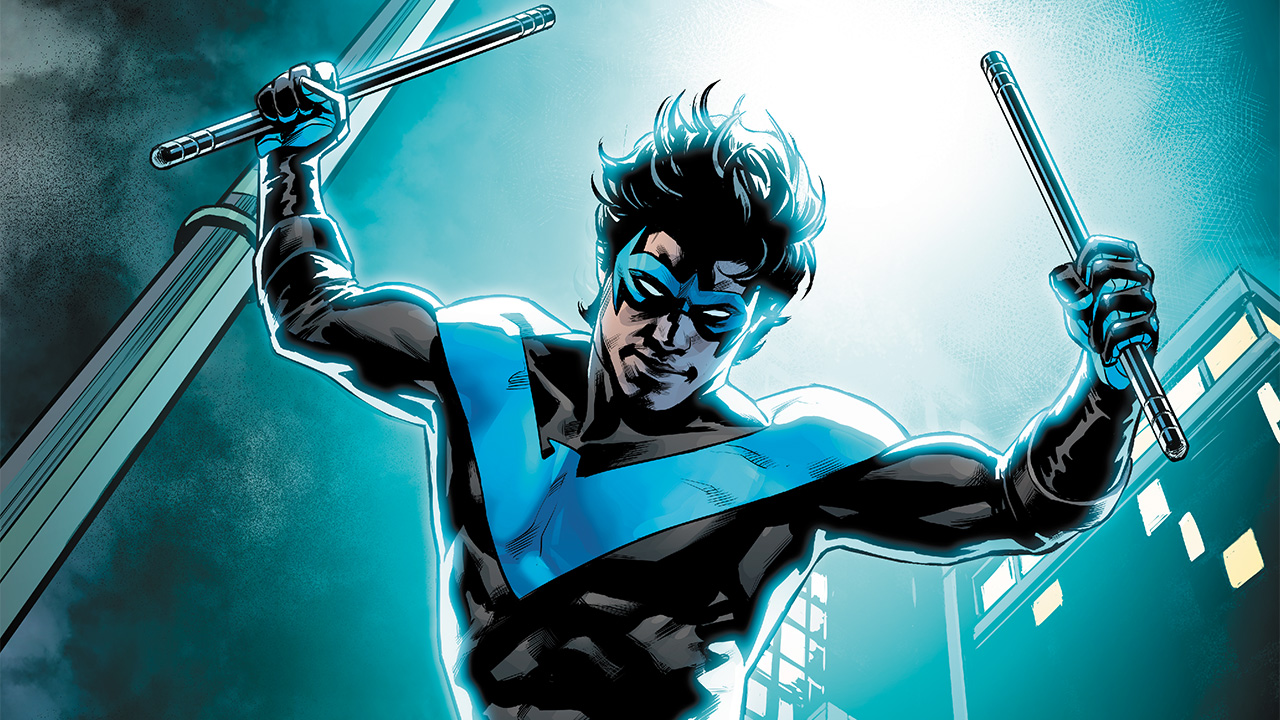 The Lewk: In Nightwing Rebirth, Dick was back with the classic blue "V" -- with the addition of a bird head as a nod to the animated series. The thinner blue logo adorns only the chest now, but there’s also some blue on his knuckles and around his calves. His forearms are armored with thicker black gloves that seemed a bit out of place with the overall sleekness of the suit. This kiss of blue looks cool on the all black suit playing into the minimalism that is present in comics today. As Coco Chanel once said to Batman, "before you leave the Batcave darling, look in the mirror and take one thing off." It's a modern look with the perfect amount of nostalgia, and the runaway winner of our recent Favorite Nightwing Costume poll.

Which Nightwing costume is your absolute favorite? Let us know in our Community!