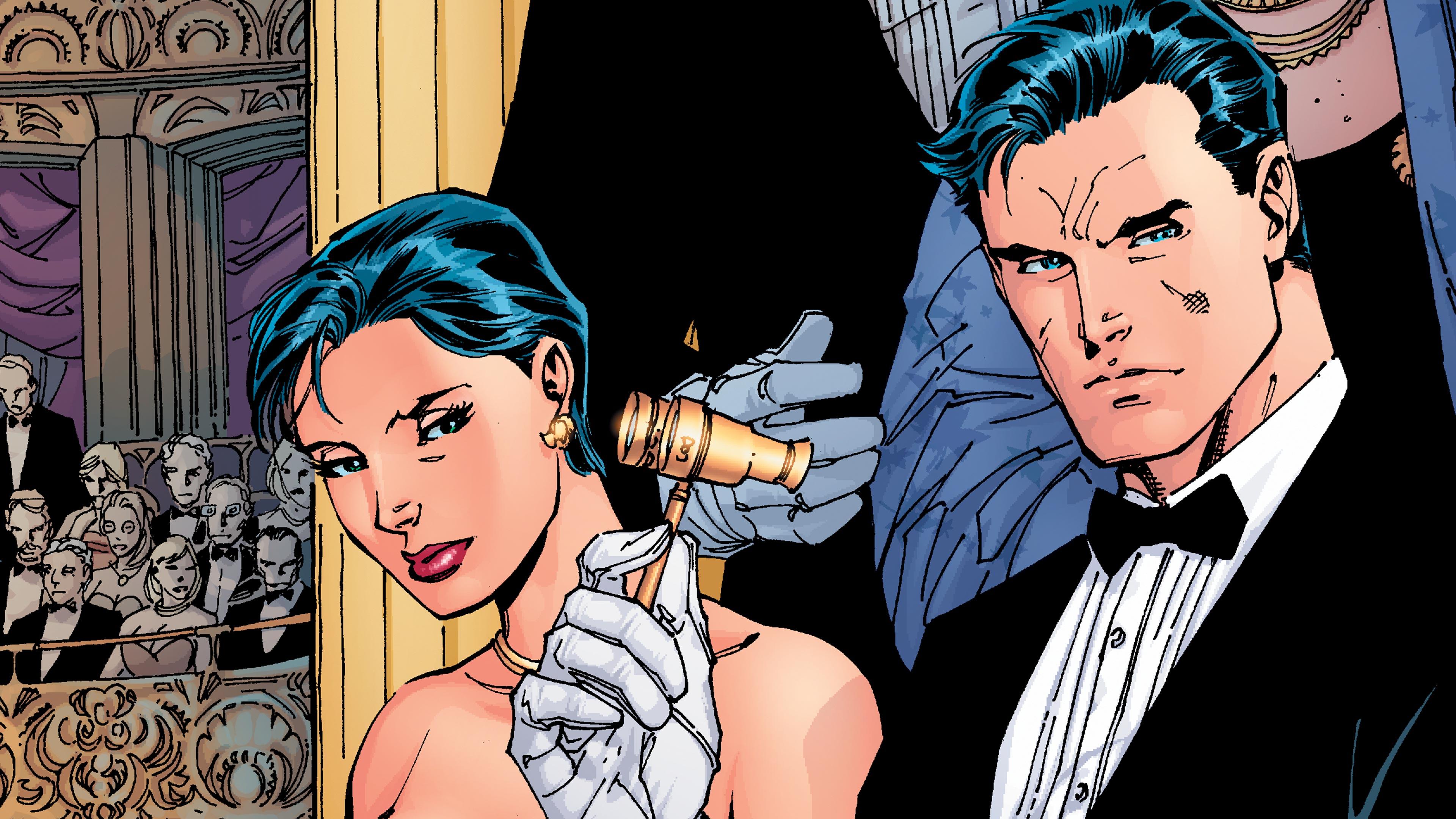 Have you ever dreamed about what you would do if you had Bruce Wayne levels of money? Some of you might use it to build your own Batcave and stately Wayne Manor, but what about the leftover cash? Let’s face it, being Batman is an expensive hobby, but Bruce Wayne is rich enough that he has plenty of cash left over after bankrolling his cape and cowl operation. So how does Bruce Wayne spend that money? Some of his purchases are charitable and help make Gotham a better place. Other purchases are – let’s just say extravagant. Here are 5 frivolous purchases that will make you say “Bruce Wayne has too much money.” 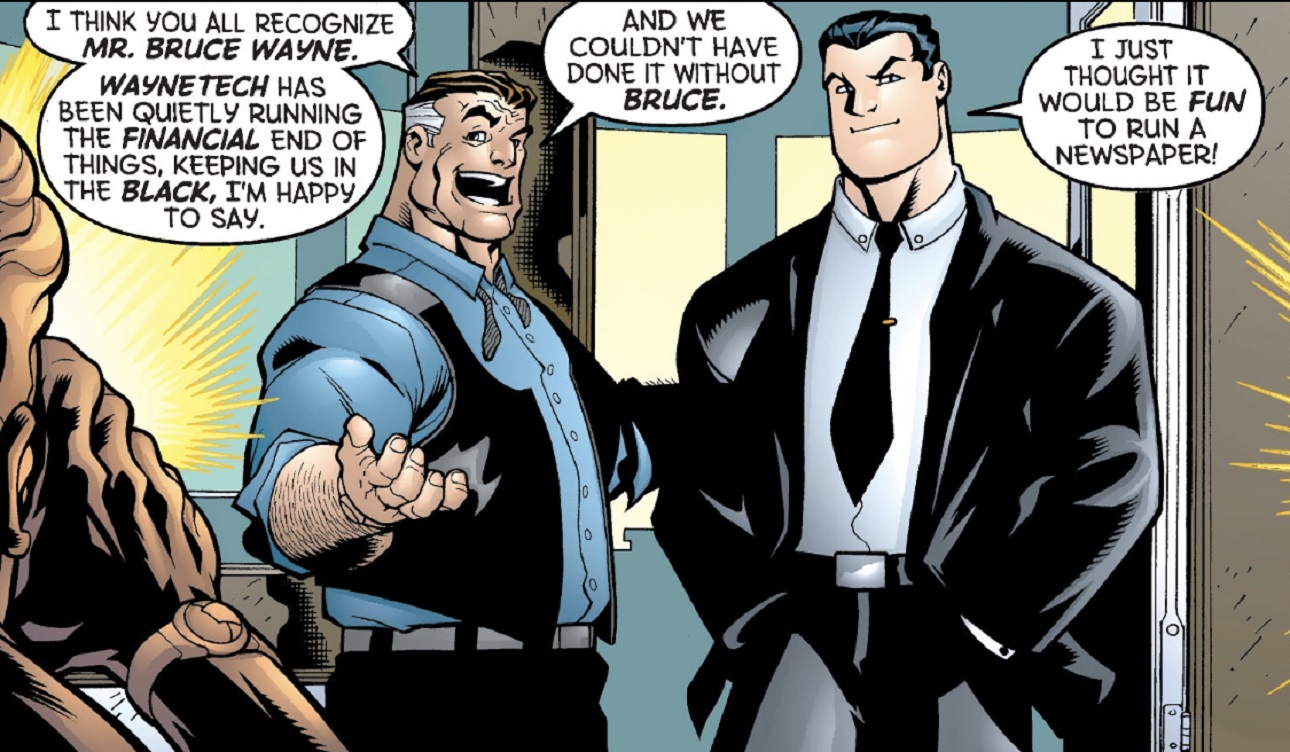 If you take a look at Bruce Wayne’s holdings, you might be surprised to learn he owns some of the most important aspects of Superman’s life. Before Clark and Lois got married in Superman: The Wedding Album the couple were disheartened to learn that their ideal apartment had a long waiting list. Bruce Wayne later surprised Clark by saying he purchased the building and the Kents were moved to the top of the list. So Bruce Wayne is Clark’s landlord, but that’s not all. In 2001’s Superman #168  (written by Jeph Loeb and penciled by Ed McGuinness) it was revealed that Bruce Wayne bought the Daily Planet because he “thought it would be fun.” So Batman is technically Superman’s boss and is in charge of his financial survival? That’s a strange power dynamic, but it doesn’t end there. At the end of the 2017 Justice League film, the Ben Affleck version of Bruce Wayne bought a bank that owned most of the property in Smallville, including the Kent Farm.

So to recap, Bruce Wayne owns Superman’s childhood home, most of his hometown, he’s Superman’s landlord and his boss. Is this his twisted way of controlling the Man of Steel?

Every Broken Door and Window in Gotham City 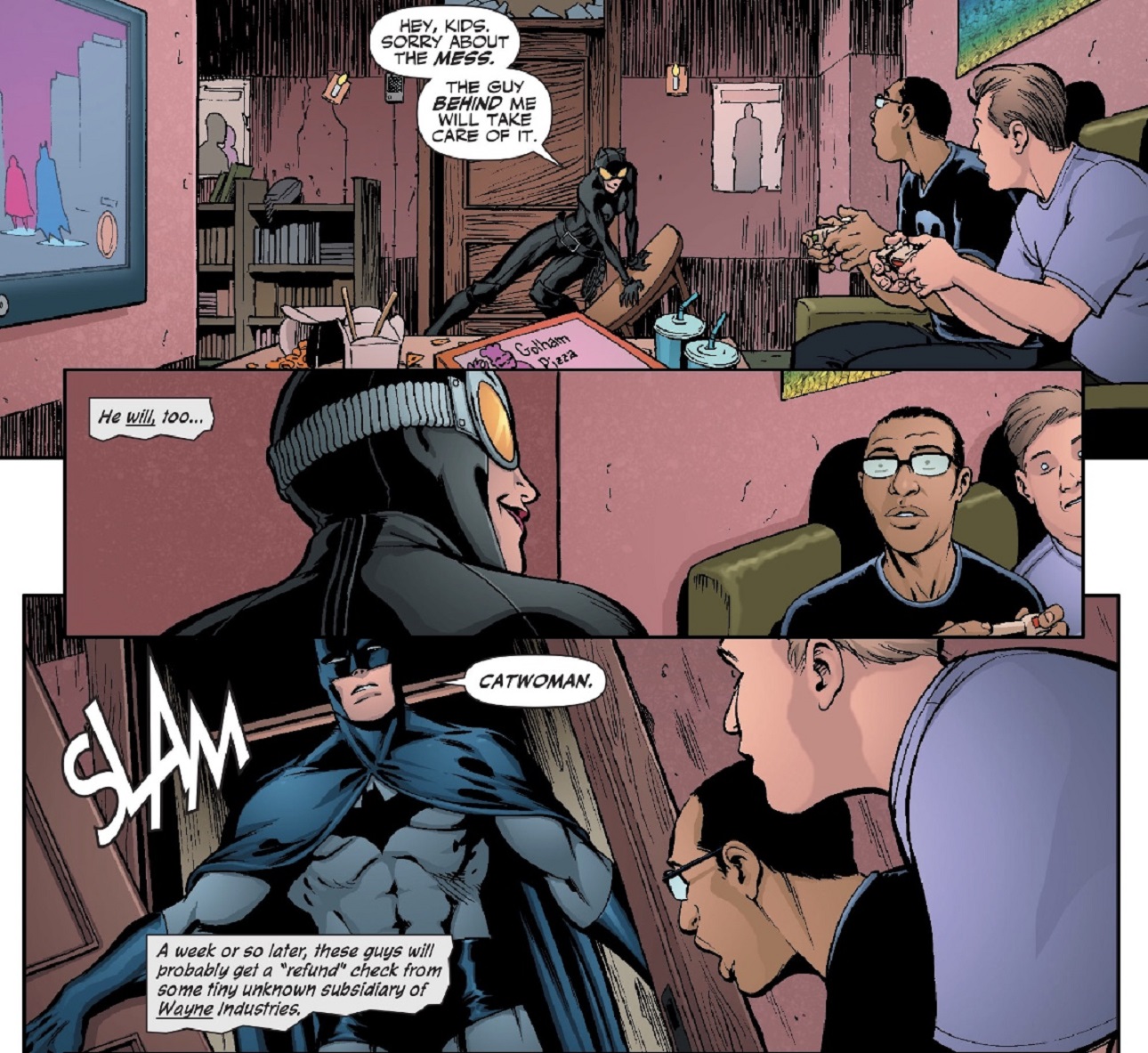 In 2008’s Catwoman #82 (written by Will Pfeifer and penciled by David Lopez) Selina Kyle revealed one of the longest kept secrets of Batman lore – Bruce Wayne pays for every door and window that gets damaged during his crime-fighting excursions. It’s the right thing to do, but when you think about it the numbers add up. How many skylights has Batman crashed through since 1939? How many doors has he kicked in? He sends money for all of those, and it’s got to be expensive. According to Selina, he funnels the money through tiny Wayne Industries subsidiaries, which must take lots of paperwork. So not only is it expensive, but it’s also a complicated paperwork act, yet Batman still breaks as many doors, windows and skylights as possible. Shouldn’t the financial drain and paperwork encourage him to try entering buildings by not destroying them? Apparently not. Good thing he has deep pockets.

2 Million Dollars to See in the Dark 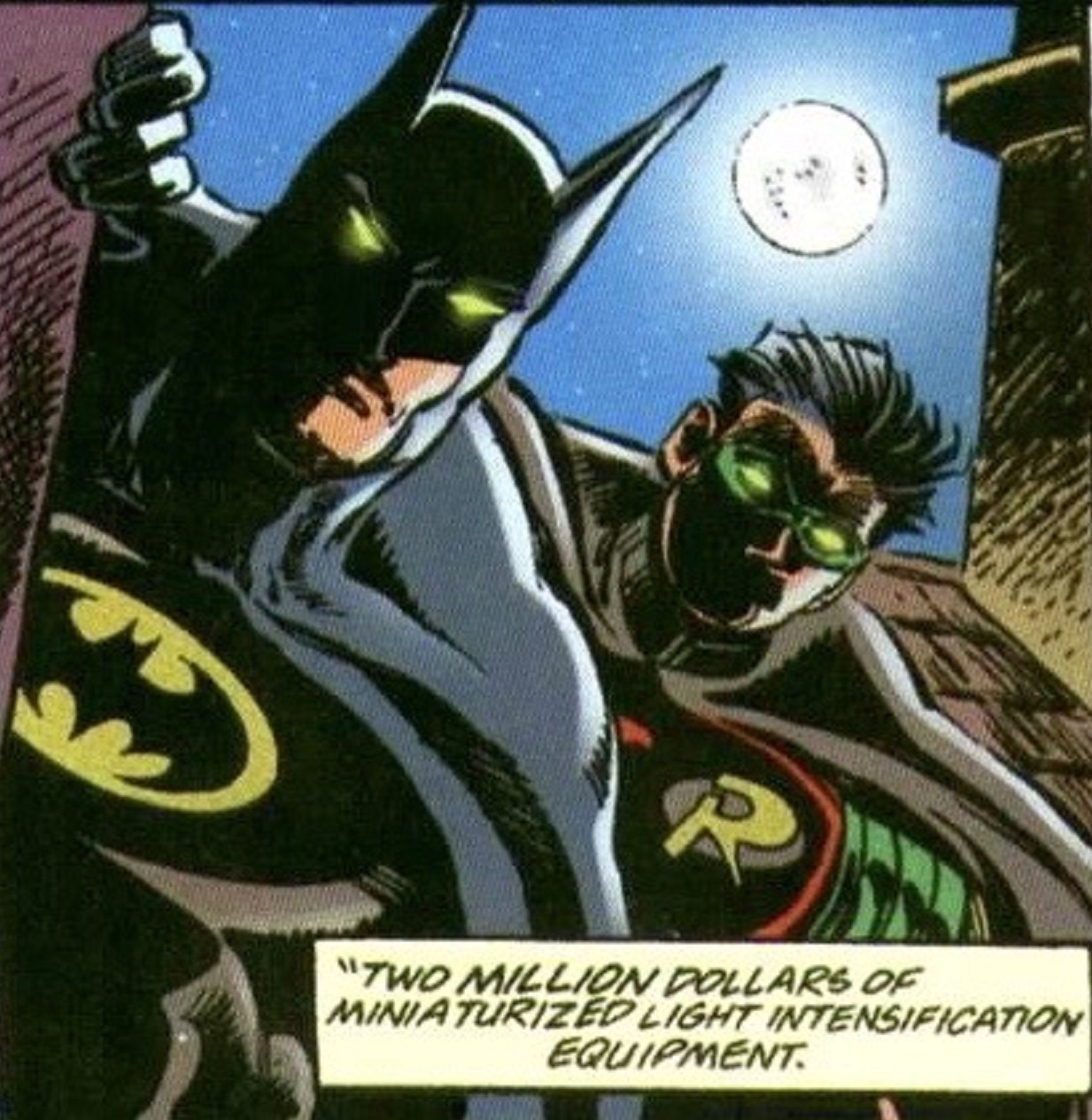 All the money that Bruce Wayne spends has to be raising some eyebrows, and Lucius Fox did plenty of eyebrow raising in 1997’s Batman Secret Files and Origins #1. Fox went over hundreds of millions of dollars of missing inventory from Wayne Enterprises and was alarmed at how nonchalant Bruce was at the discrepancies. Readers were quickly shown that the “missing items” were actually “borrowed” by Bruce for his Batman operations, including two million dollars used to….help Batman and Robin see better in the dark. Radio Shack was still in business back in 1997, and Bruce probably could’ve gotten a flashlight or something for less than twenty bucks. When you think of all the economic alternatives, two million dollars for night vision masks seem excessive, even for Batman. 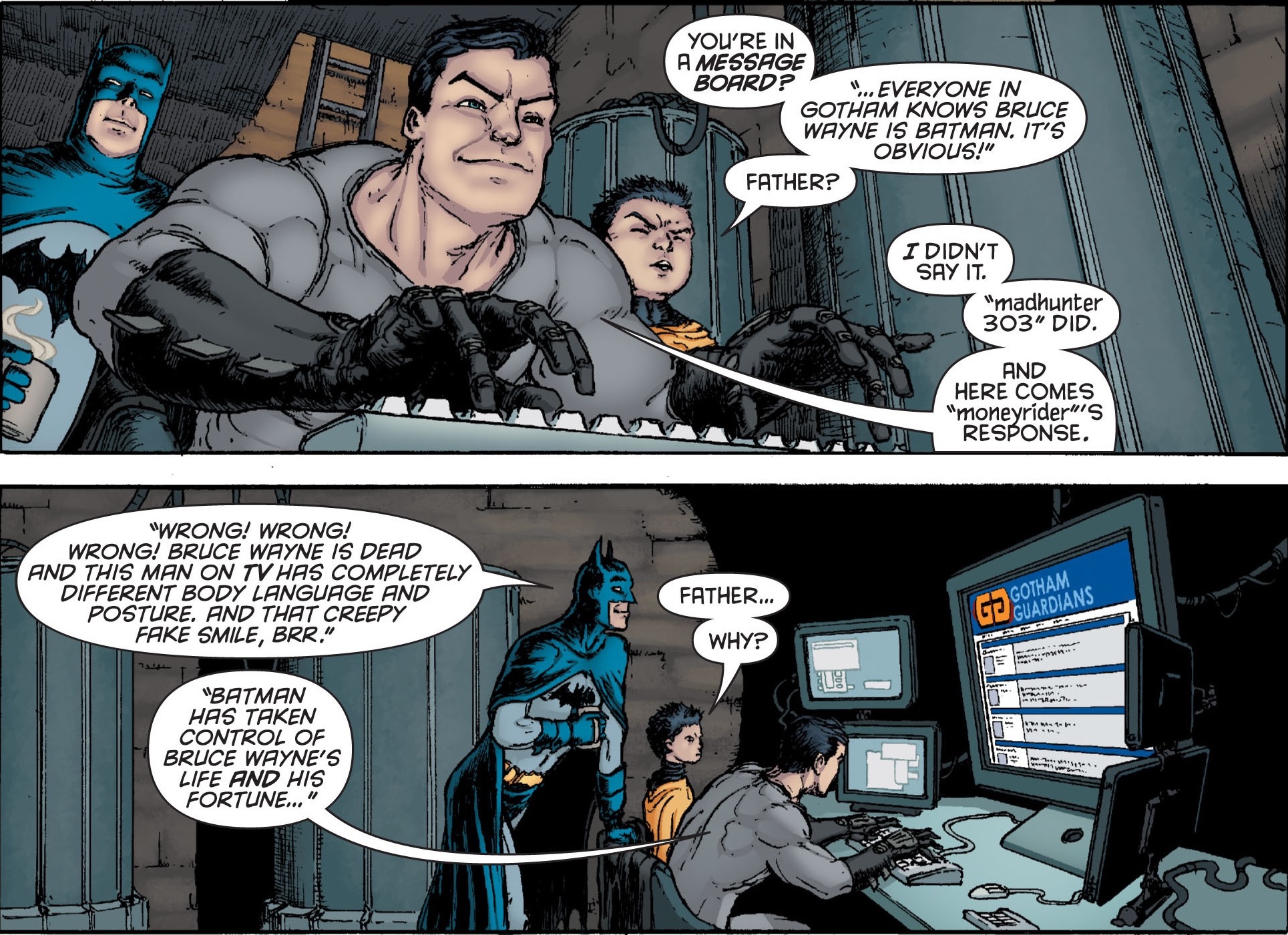 In 2011’s Batman Incorporated #6 (written by Grant Morrison and penciled by Chris Burnham) Bruce showed off one of his most bizarre secret hobbies – his troll farm. If you’re expecting this article to talk about how the Batcave has a secret zoo of fantastical troll creatures, we’re sorry to say that this pertains to the other kind of troll farm; the one where you create a bunch of anarchy on internet message boards. Bruce Wayne bought a workstation of multiple computer monitors, keyboards and computer mouses and used it to create arguments with himself (acting as different usernames) on message boards. Damian’s reaction was “Father…why,” and frankly we’re right there with him. Bruce’s reasoning was that if internet trolls said Bruce Wayne was Batman, then nobody would believe it.

It’s a weird flex, but you do you Bruce. The Batman: The Animated Series episode “If You’re So Smart, Why Aren’t You Rich?” estimated that the average Batcomputer costs 50 million dollars. As the image demonstrates, Bruce is using multiple computers for his war on internet decency. This means that Batman is spending close to a quarter of a billion dollars to argue with himself online. Didn’t Barbara tell him he could just use one computer and multiple browsers?

Did you know that Bruce Wayne collects prize winning horses? We’re not sure how he even has the time to care for them, but in 1948’s Batman #48, Bruce complained to Jim Gordon that he was having trouble taking care of them all. Maybe crime-fighting, running multiple corporations, buying everything Superman loves and adopting orphans means that you don’t have time to raise expensive horses. Sometimes you just have to ask yourself “Do I really need another prize winning horse” and the answer is “no.” Despite this, Detective Comics #157 revealed that Bruce Wayne had his own stable, which probably makes sense since the horses wouldn’t like it in the Batcave. When Robin is gifted a horse, Bruce and Dick ponder how they’d put the Boy Wonder’s horse in Bruce Wayne’s stable without people realizing their secret identities. Batman came up with the ingenious solution of having Robin publicly rent a stable from Bruce Wayne. So now Bruce is wasting money by paying himself rent through his ward, which seems like Bat-money laundering. Vicki Vale didn’t fall for this ruse at all, and thought the arrangement was suspicious. It’s a good thing Bruce has that troll farm to throw her off.