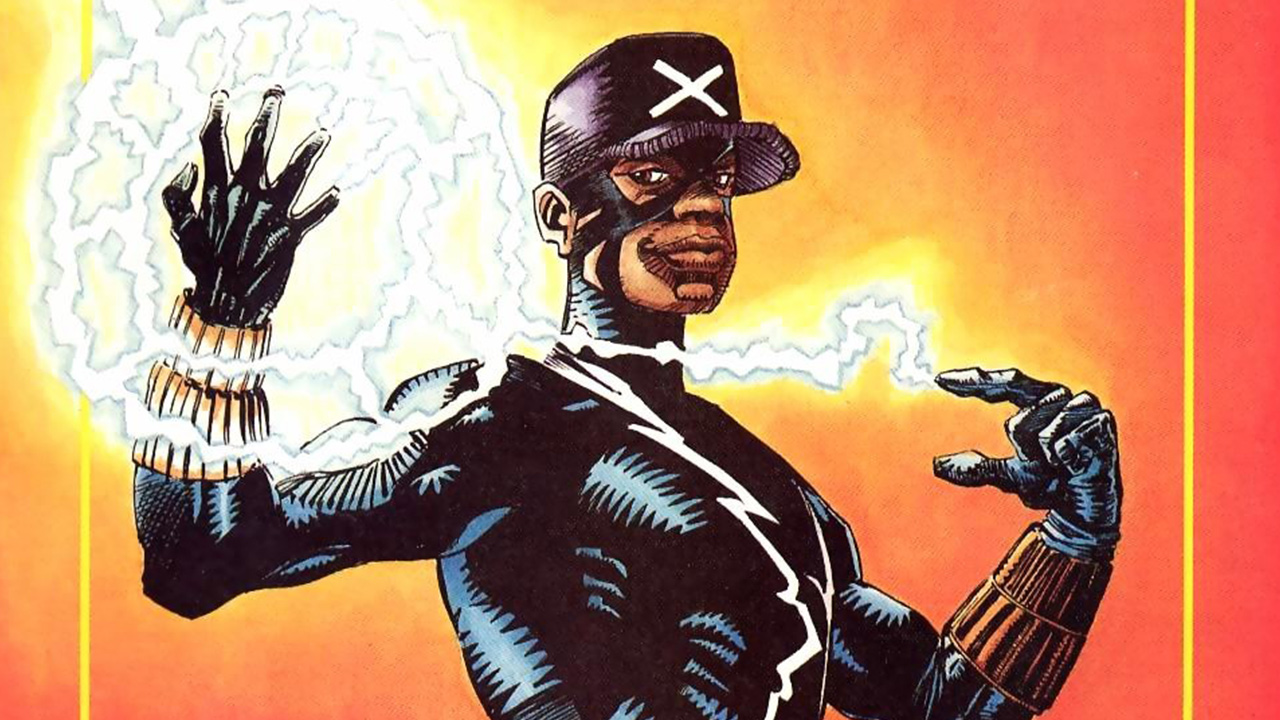 We examine the different topics and social issues Milestone tackled through its four headlining books.

Black and Proud: The Legacy of Milestone Comics

When DC's Milestone Comics premiered in 1993, it ushered forth dozens of characters, heroes, and villains of different backgrounds. It was unlike anything mainstream comics had published before. Superficially known as simply a black comic company, the Milestone books sought to represent diversity through avenues beyond simply race. With four initial titles -- Static, Icon, Hardware, and Blood Syndicate -- characters of different socio-economic backgrounds, races, religions, sexual orientations, and genders were presented through superhero stories that stayed true to the genre while simultaneously reinventing it. The diverse characters provided diverse functions for these stories. Let’s look at the different topics and social issues Milestone tackled through it’s four headlining books, and the legacy it created. 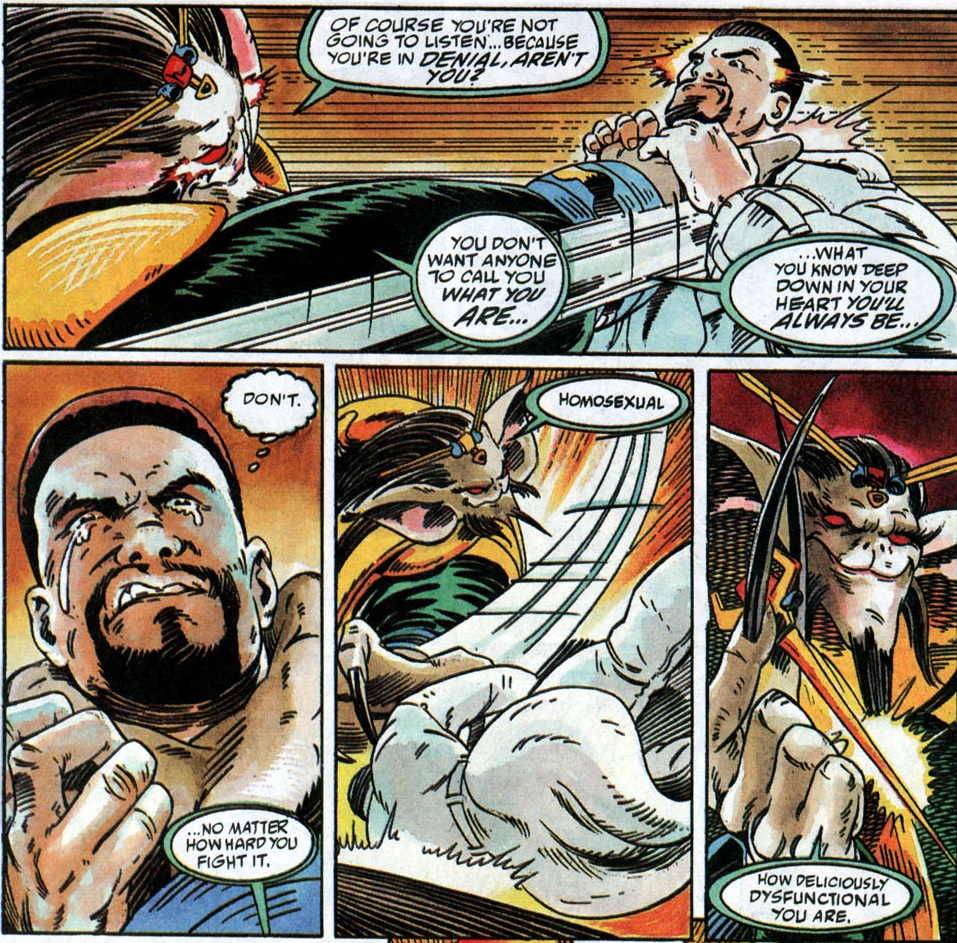 As has been written before, queer representation in mainstream comics has had a storied history, often falling into coding in order to stay within the boundaries of the Comics Code Authority. Although an imprint of DC Comics, Milestone managed to be published outside the confines of the CCA, allowing for stronger content to be printed without pressure to be censored. As a result, not only could the books be more violent, but real-world themes found their home in every book. Blood Syndicate and Static featured gay characters, both as main and supporting players. In Blood Syndicate, the character Fade fights the villain Demon Fox who battles with supernatural powers. During this fight, Demon Fox lays it plain that Fade’s been denying his sexuality to everyone, even himself. After the battle, Fade’s terrified that his teammates will find out about him, even though a few have already figured it out on their own.

More notably in Static, Virgil’s friend Rick Stone is found by our hero after he's been beaten up by a gang of bigots. Here Rick comes out to Static as gay, a fact he’d been denying despite daily taunts from his friend group. The revelation stuns Virgil, who struggles to cope with his own latent homophobia. Eventually, at a Gay Rights demonstration, Virgil and his friends are attacked by the villain Hotstreak, whose arrived with counter-protestors hoping to start a riot. Static and Hotstreak duke it out over the streets of Dakota, while Rick’s friends bear witness to the kind of violence gay communities suffer regularly. 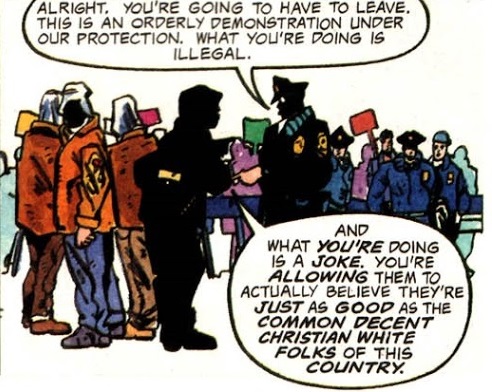 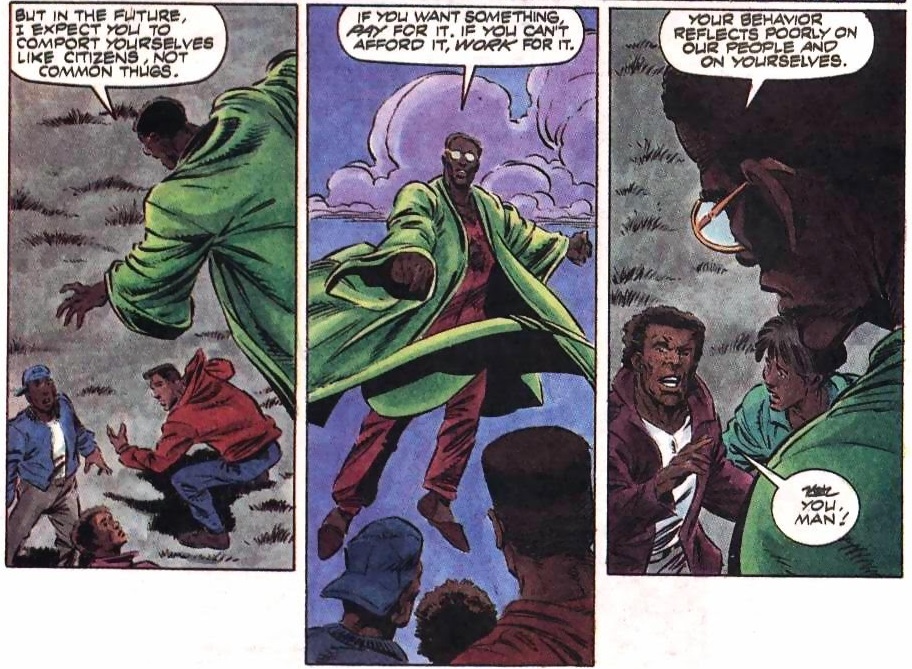 Respectability politics is a common discussion in Civil Rights, seeking to distinguish taking necessary action from what those actions say about the individual. This is addressed right away in Icon, where the hero Augustus Freeman IV is approached by a teenage girl named Raquel. After Raquel was talked into a failed attempt at breaking into Freeman’s mansion, she's inspired to become a hero and pleas with the wealthy lawyer to help her rise up the lower class of Dakota by becoming a costumed champion for people to look up to. In other words, an icon. 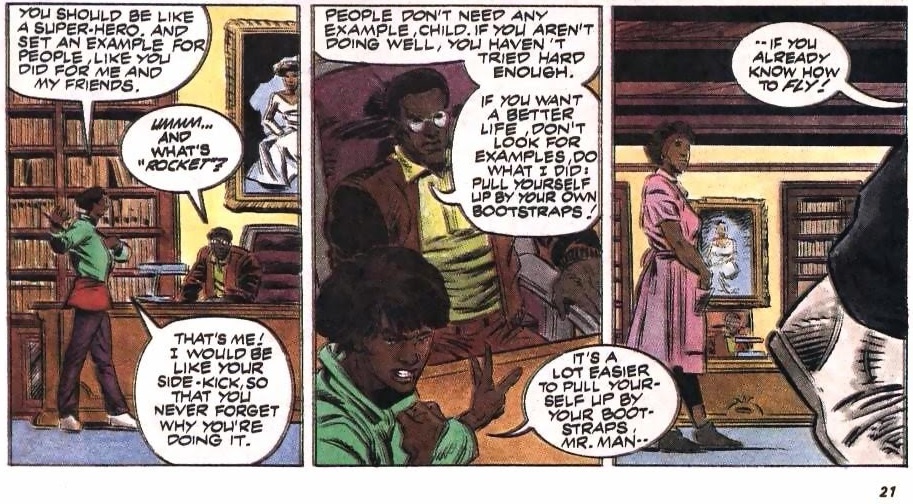 Icon has always lived by the mantra of “Pulling one up by one’s own bootstraps.” But after meeting Raquel, he’s forced to confront the facts about his existence and realizes he’s been self-centered and irresponsible.

Raquel must deal with this question of power and responsibility too. Very early in the series, she discovers she’s pregnant. After finding her calling as Icon’s partner Rocket, Raquel must make a decision that would affect everyone around her. Her mother had her when she was young, and in their household there’s not much financial means to raise a baby. Still, Raquel decides to carry the child to term, and gives her best friend Darnice the Rocket technology to carry on in her place during her maternity leave. 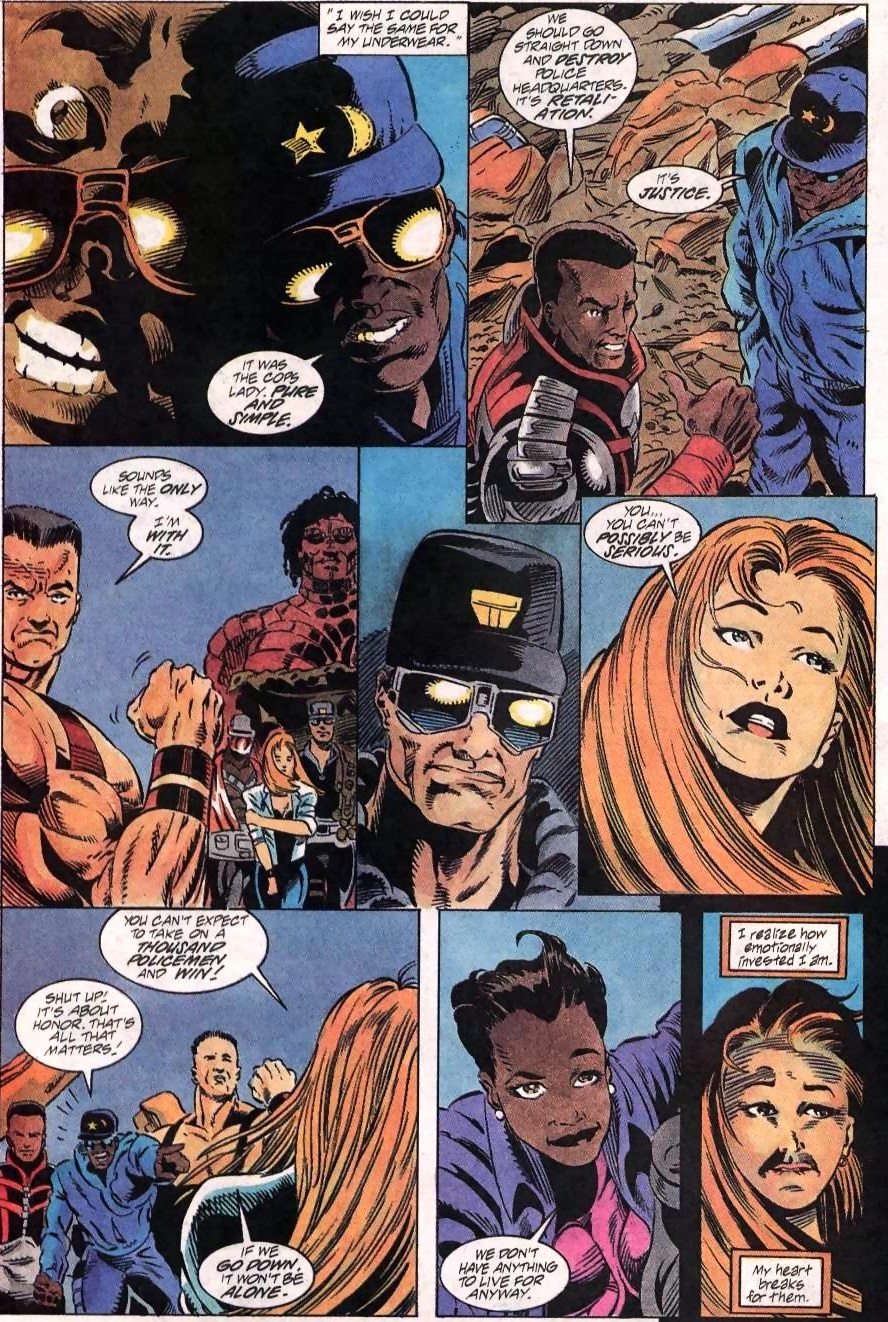 The flashpoint event of the Milestone Universe is "The Big Bang," a gang war that resulted in the deaths of hundreds of people due to police interference with an experimental chemical known as Q-Juice. Publicly, the deaths were attributed to the violence of the gangs, particularly the Paris Bloods and the Force Syndicate. But everyone who gained special abilities that night, from Virgil Hawkins to the members of the Blood Syndicate and the other “Bang Babies” know it was the police interference that created The Big Bang. Creator Denys Cowan attributed this to a real life event in a recent episode of DC Daily, saying that the actions from the government were so shocking, they seemed to come straight from a comic book.

The Blood Syndicate were a gang composed of men and women from different racial and religious backgrounds, and operated as a single unit, dysfunctional but with noble intentions. They sought revenge on those who wronged them, and the same was the case for Hardware. Curtis Metcalf was a child prodigy and technological genius who was groomed by businessman Edwin Alva to work for him, providing his company with inventions that made millions. When Curtis requested his royalties, Alva coldly denied him, which led Curtis to discover that Alva’s businesses were fronts for criminal operations. The revelation led Curtis to an epiphany that his life’s work had been for the interests of someone else, as illustrated in a repeating metaphor of a bird fleeing a bird cage only to fly into a glass window. 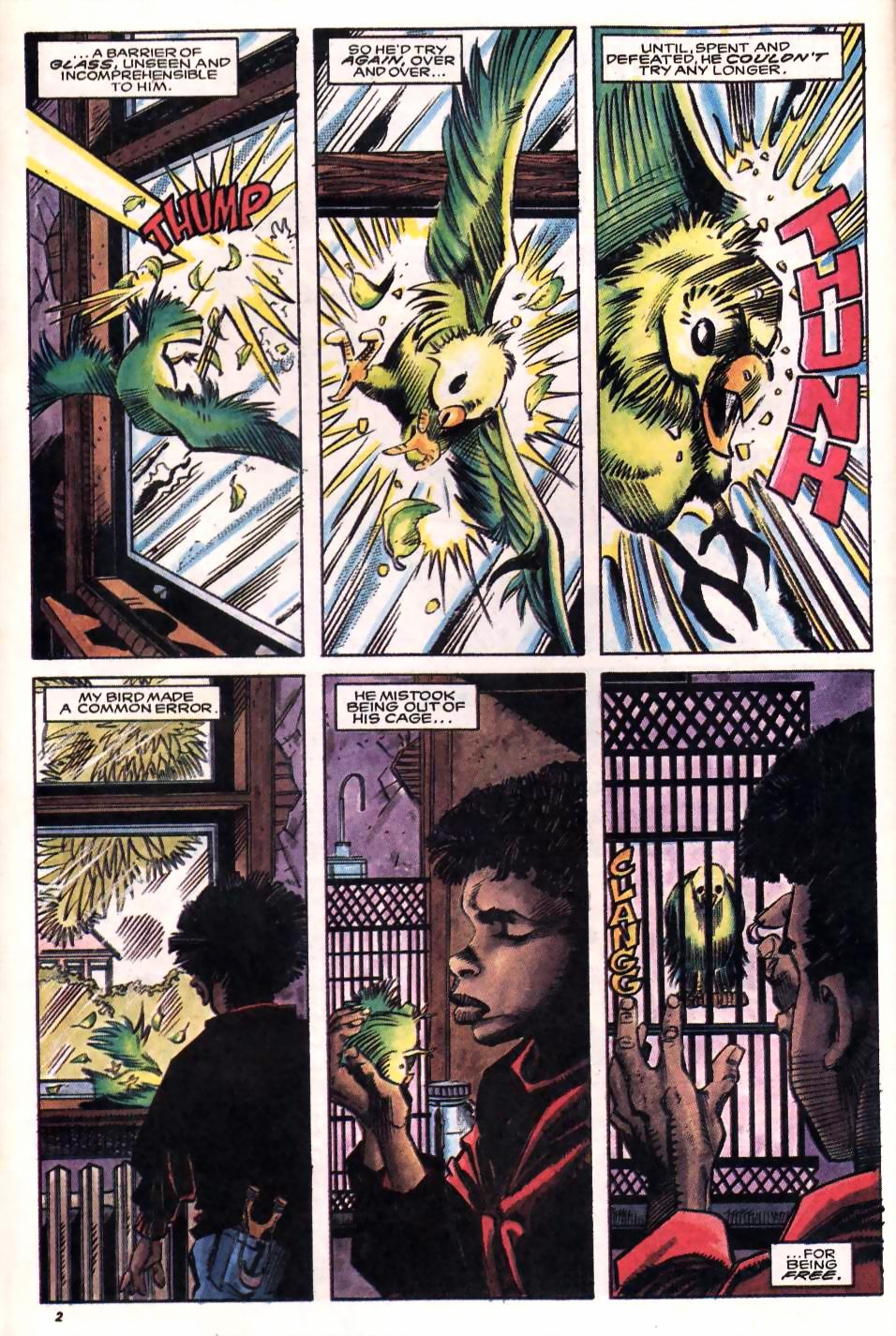 Writer Dwayne McDuffie, along with co-creators Ivan Velez Jr., Denys Cowan, Robert Washington III, and many others incorporated not just different stories from the superhero norm, but different themes reflecting the difficulties navigating a world whose media reflects a small group of people. These themes resonated with readers, and over the years they've continued to do so, with Milestone's characters finding new life in the Static Shock animated series and Young Justice. Because of Milestone's contributions, the DC Universe is that much stronger and offers more storytelling avenues than it possibly could have without them.

What are your favorite Milestone characters? Let us know in our Community!