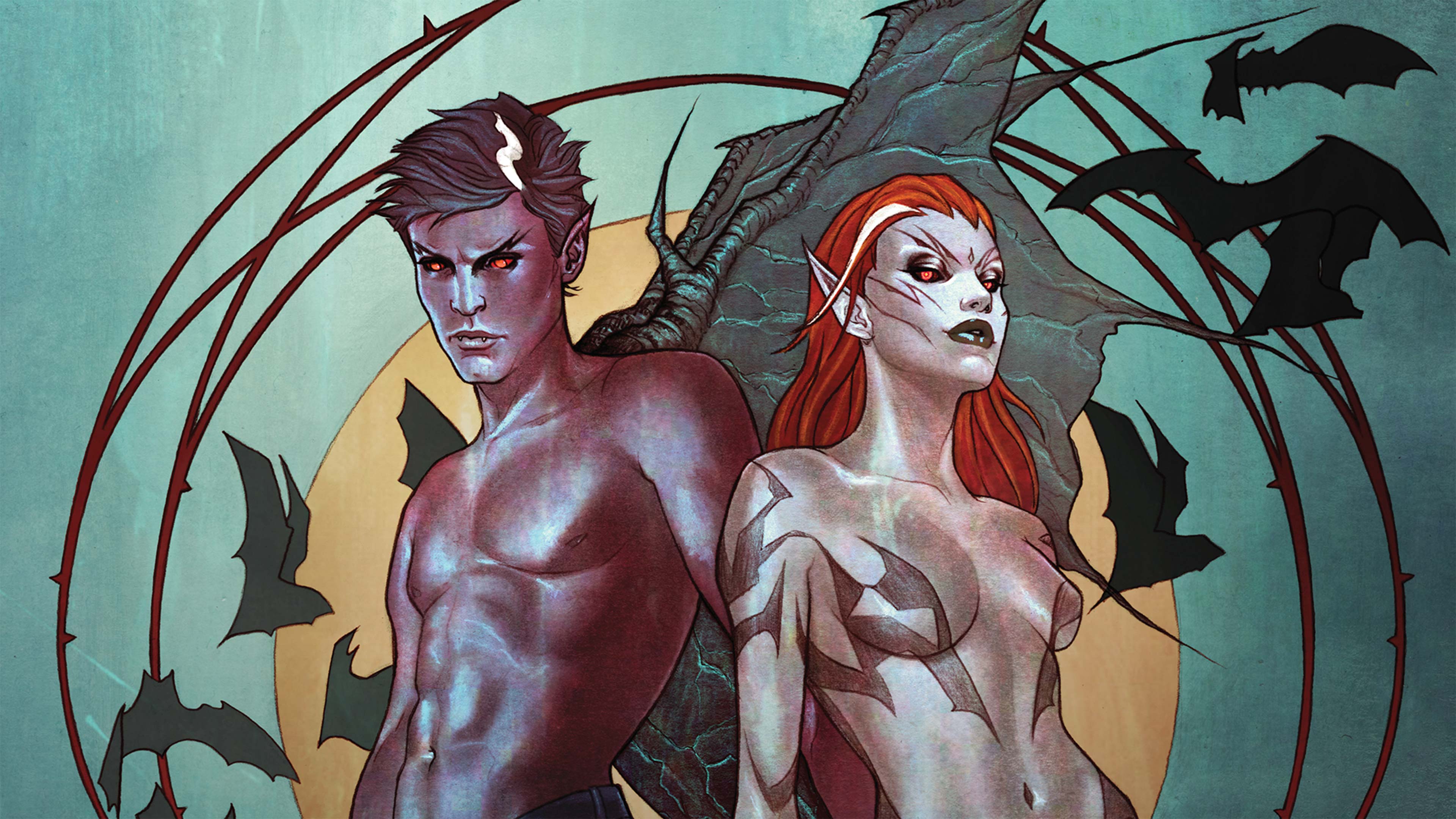 Binge This: I, VAMPIRE Is a Graphic Vampire Romance Novel

With over 23,000 titles to choose from in our vast and prestigious comic book library, you’re never without a good comic to read on DC Universe. The only question is: what to sink your teeth into first? Well, if you’re thirsty for some gothic romance that goes right for the jugular, then the I, Vampire series by Joshua Hale Fialkov and Andrea Sorrentino might be just what you need to get the blood pumping. 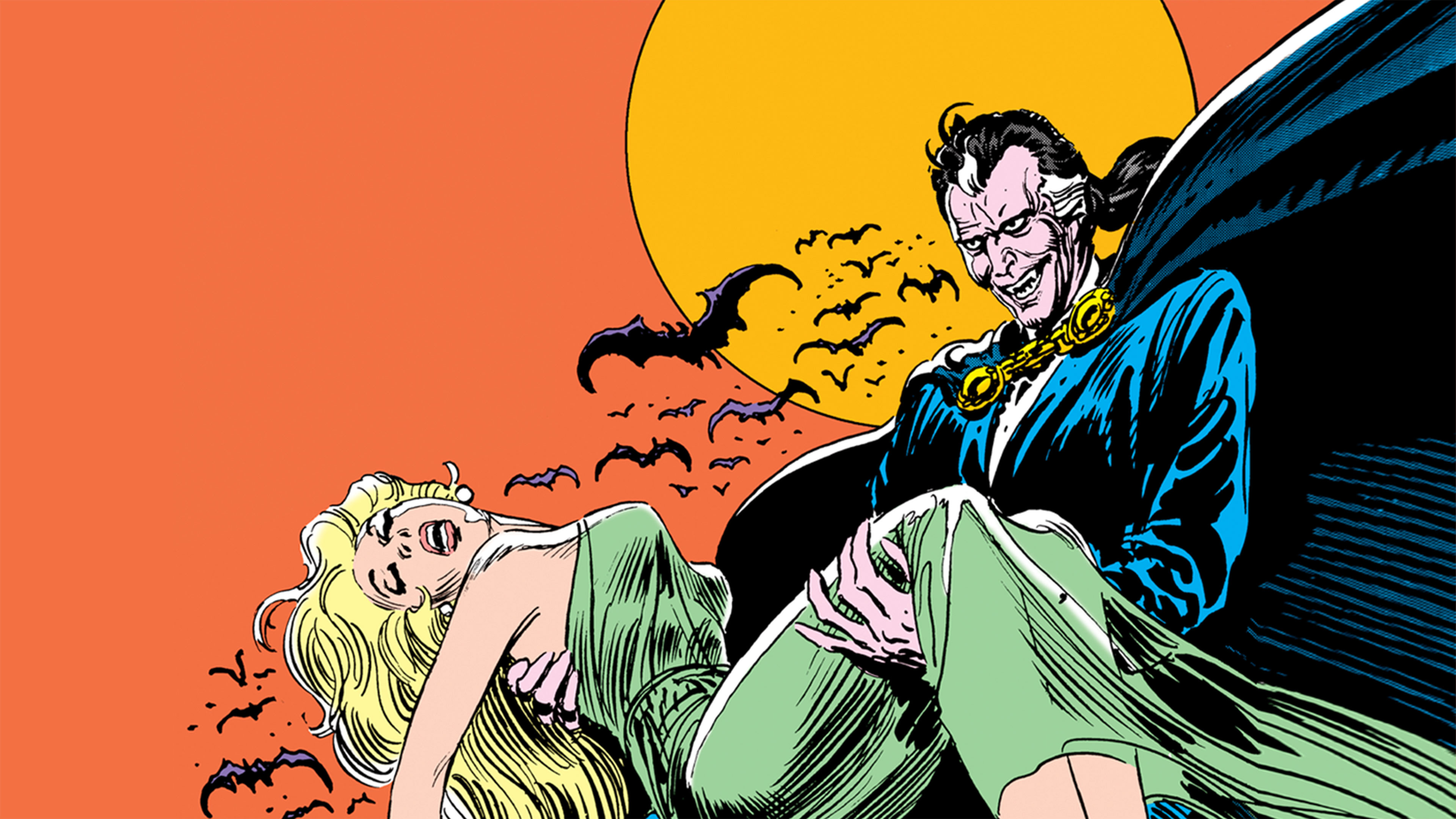 This story of longing, treachery, sacrifice, and doomed romance is a New 52 revamp (sorry) of “I… Vampire!,” a dark serial which ran in DC’s flagship House of Mystery anthology from 1981-1983. The original “I… Vampire!” hits many of the same story beats as this modern updated take, and later issues of Fialkov and Sorrentino’s follow-up even imply that a version of the events of the original may have happened before this reimagining for the 2010’s. While it’s not necessary to read before diving into the newer series, it may provide a more complete picture of Andrew Bennett and Mary Seward’s tragic love, and the hapless heroes who get caught in the middle. 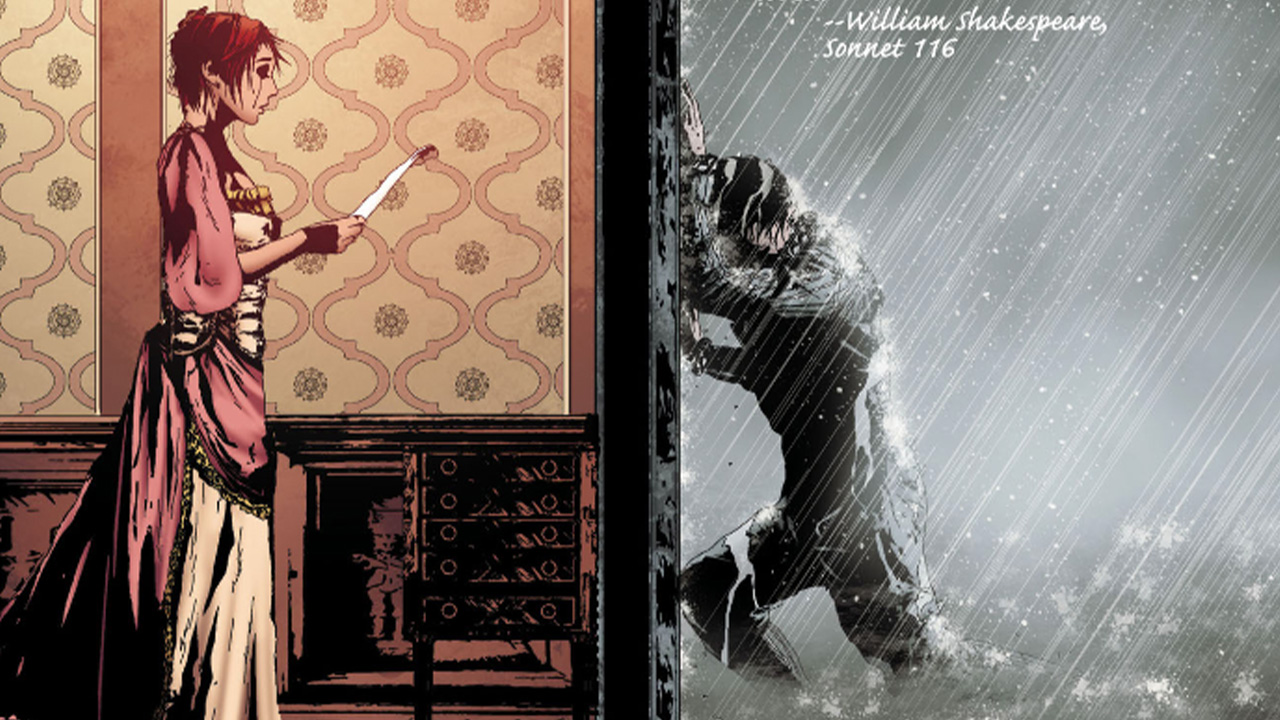 500 years ago, Lord Andrew Bennett fell in love with a young scullery maid, Mary Seward, far below his station. But Andrew and Mary would outlive all their naysayers when Bennett fell victim to the bite of a vampire, and turned Mary to join him in an eternity of night and blood. But while their love was enough to sustain Andrew, Mary sought more. Over centuries, Mary built up a private, secret army of vampires to overtake humanity as the world’s dominant species. It was a coup generations in the making, and one she may well have pulled off… had she not failed to account for the rise of Super Heroes in the modern era. In the war between heroes and vampires, does the woman Andrew loved still exist within the calcified Queen of Blood? In I, Vampire, the battle between the power of love and the curse of the vampire is never simply won. 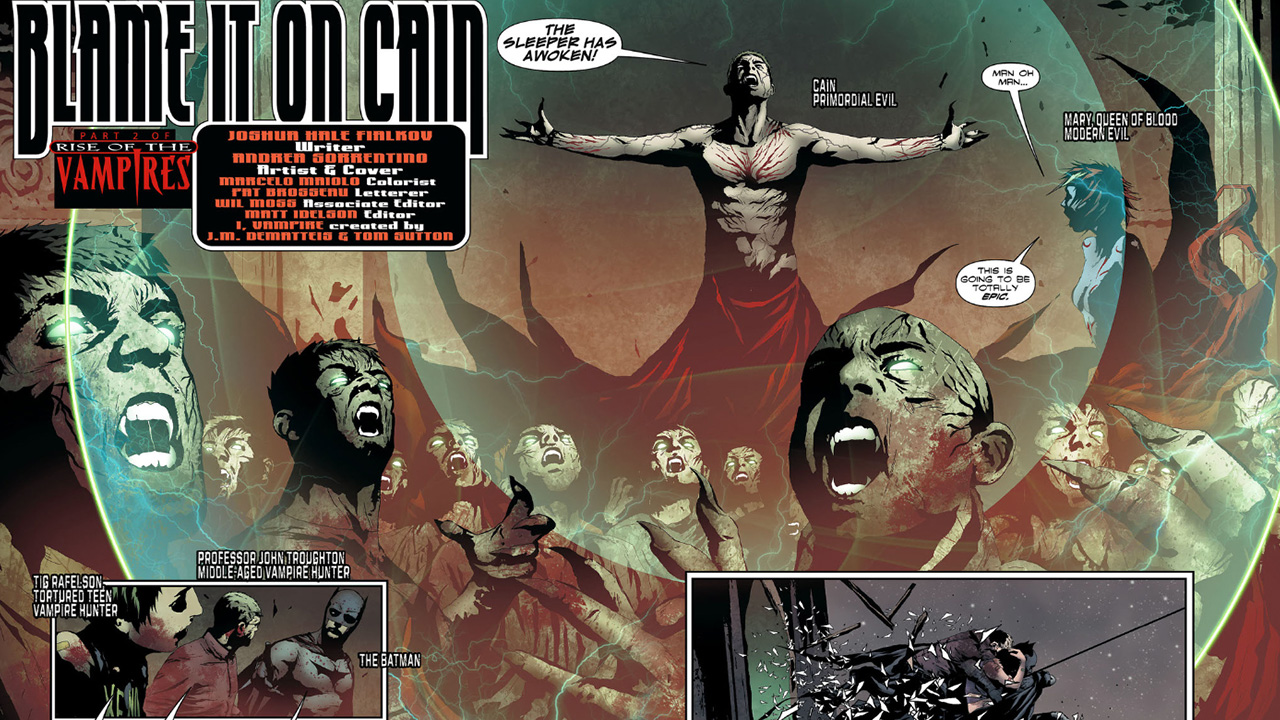 * DARK MANSIONS, FORBIDDEN LOVE: In decades past, DC’s robust publishing line was known for more than just cape books: its horror and romance anthologies were among its most celebrated titles. I, Vampire hits the sweet spot right in the center of both these historical comic book genres, carrying the legacy of each into the modern age.

* THE WORLD IS A VAMPIRE: Ever wanted to see how John Constantine would deal with a vampire apocalypse? Or see what happens when a vampire bites a solar-powered hero like Apollo, of Stormwatch? How about when the Queen of the Vampires eyeballs Batman himself as her personal choice for a new King? I, Vampire takes advantage of The New 52 era’s thoroughly integrated continuity in a way few other titles ever achieve. It’s never just a vampire story -- it’s a DC Universe vampire story.

* VAMPS VS. ZOMBIES: These are the questions that keep us up at night: what happens when a zombie bites a vampire? What happens when a vampire bites a zombie? And how exactly do mummies fit into the larger undead milieu? All of these questions and more are dealt with through the winding course of this course credit eligible treatise in vampirology.

* TRUST NO VAMP: One of the biggest problems in an ongoing comic series is how to maintain a feeling of character progression while maintaining a necessary status quo. I, Vampire solves this in an elegant way: in this book, there IS no status quo. Short of blowing up the world, anything can happen to these characters with minimal roles in the larger DCU, so check your expectations at the door. Alliances and relationships shift constantly from issue to issue, in a whirlwind that always keeps you on your toes. 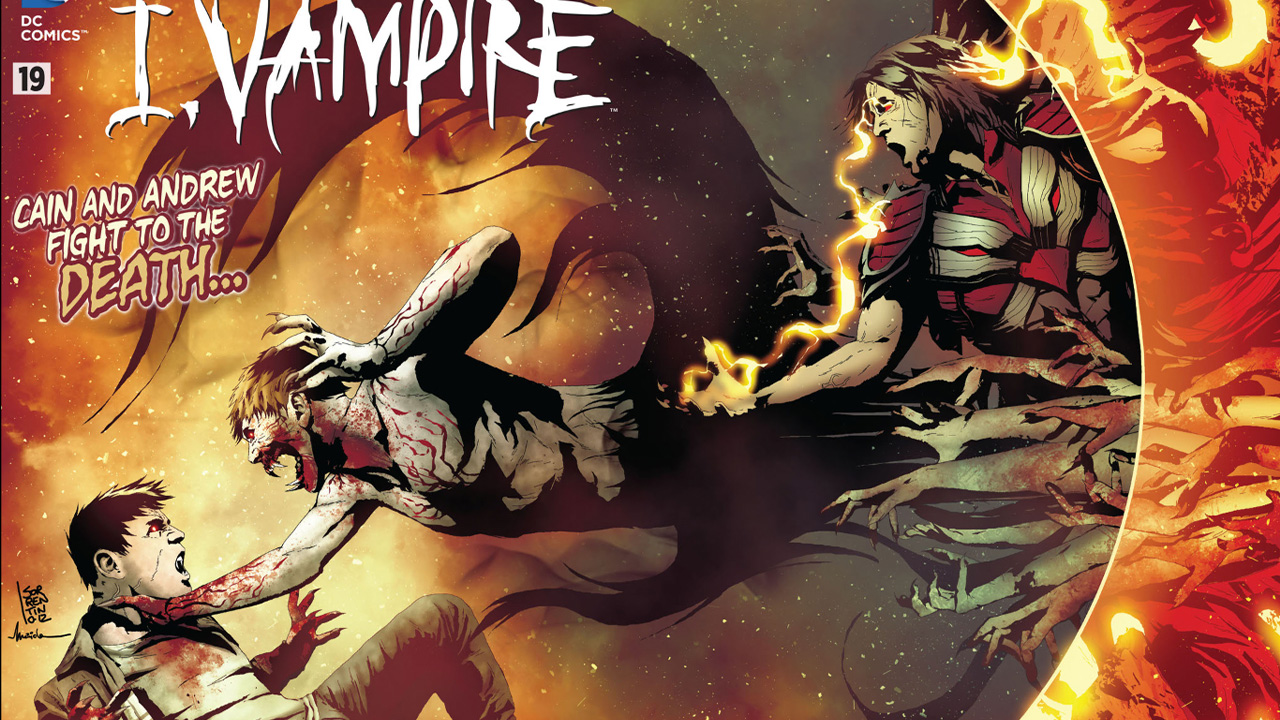 Clocking in at 20 issues- 22, including the Justice League Dark crossover (PRO-TIP: switch to our “Rise of the Vampires” collection after reading issue #6)- I, Vampire is the perfect length to grab you just as the lights go out and keep you hooked until dawn breaks over the horizon. Just be sure to keep some garlic handy, and don’t let any strangers in… teen vampire hunter Tig Rafaelson, soon to be your new favorite character, will fill you in on the rest. Whether you’re in it for gory kills or the love story of a millennium, I, Vampire has what it takes to keep you in its thrall.

Are Andrew Bennett and Mary, Queen of Blood DC’s most star-crossed lovers? Let us know in our Community!