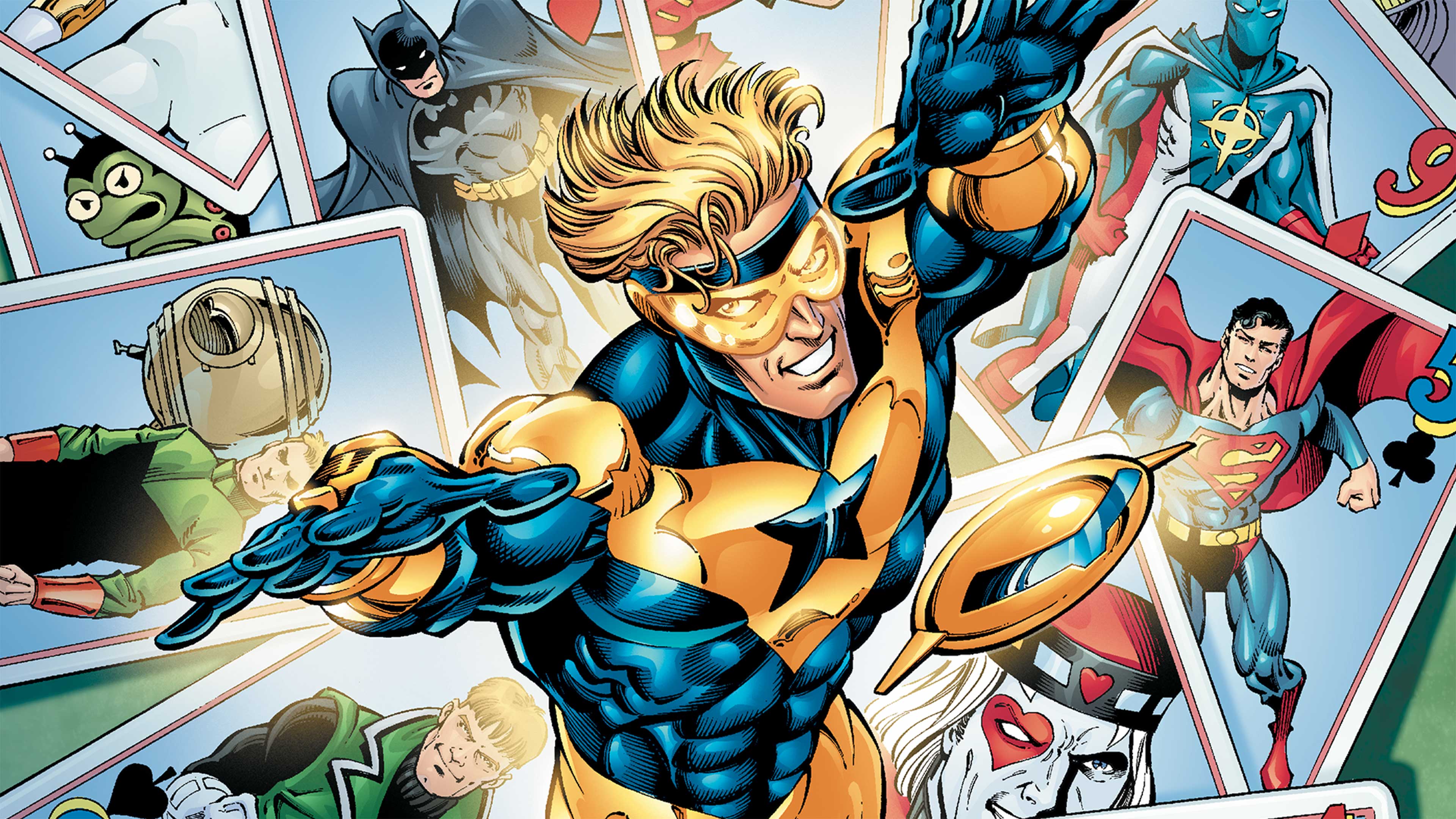 Between crises, crossovers, reboots and resurrections, the timeline of the DC Universe can feel a little overwhelming. And with over 23,000 comics in our library, you’d have to be a Time Master to figure out how to sort it all out without losing yourself in the proper order of events. Welcome to the life story of Booster Gold: a man out of time in more ways than one, whose solemn duty is to keep our labyrinthine continuity in line… despite the fact that he doesn’t have a clue. 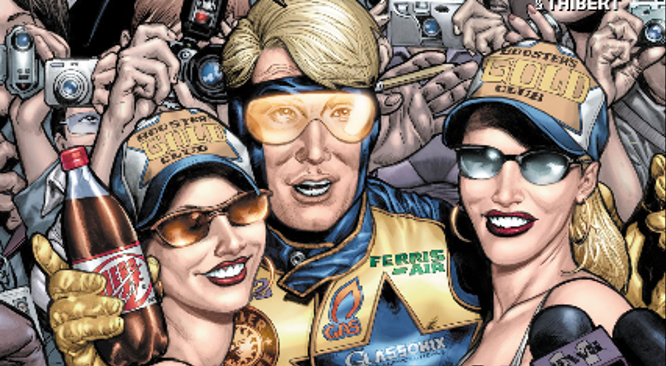 First introduced in the 80s, Booster Gold was originally a disgraced football star from the distant future, who traveled back in time to the present for a second lease on life as a Super Hero. He spent some time with the Justice League International, yukked it up with his best buddy Blue Beetle, and garnered a reputation as a general sell-out wannabe glory hound. That all changed in 52, the 2006 series which arguably positions Booster as the main character in a year when Superman, Batman, and Wonder Woman are all on holiday. Fallen further from grace than ever before, Booster Gold becomes the one man who can save all of time from destruction… a role that, despite his hunger for fame and fortune, no one must ever know he played, for the sake of the universe. With the conclusion of 52, Geoff Johns continued Booster’s secret life as an agent of timeline preservation in 2007’s Booster Gold -- the temporal misadventures of the greatest hero you’ve never heard of. 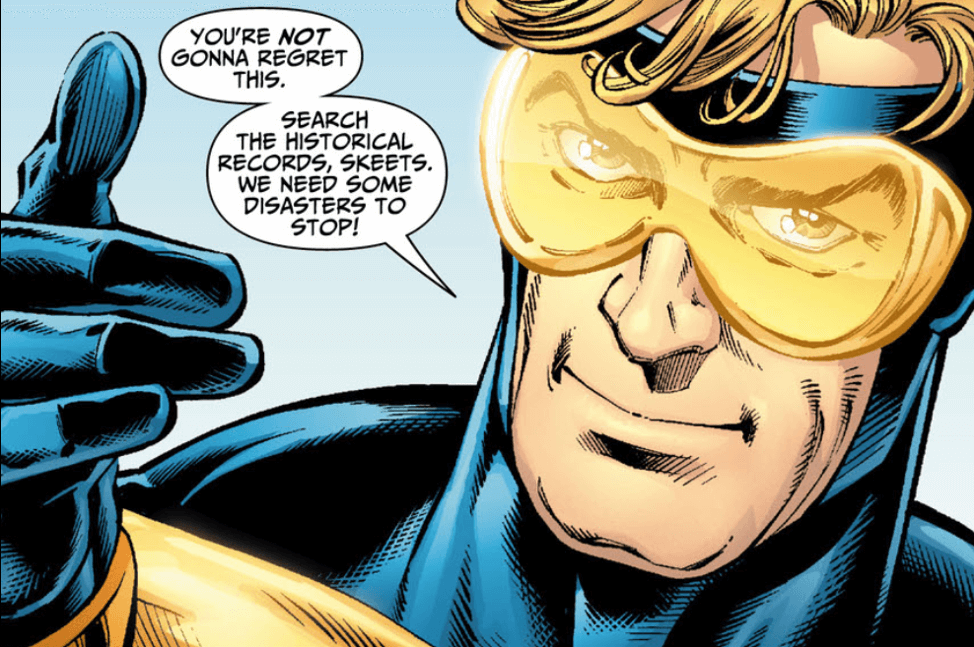 Why is Booster Gold the perfect agent to protect the timeline? Because he’s the last person you’d ever expect to be crucially important to its survival. To keep time bandits from interfering with Booster’s work, his crucial time traveling missions must be kept absolutely secret… making Booster Gold the first great Super Hero whose secret identity is an incompetent Super Hero. But with all of time at his fingertips, can Booster avoid the pitfalls of trying to “fix” the tragedies which must come to pass? And if not, will the timeline himself even let him succeed? And what exactly is the mysterious connection between Booster Gold and his Time Master mentor, Rip Hunter? All will be revealed, or at least alluded to, in esoteric continuity clues scrawled onto chalkboards. Whether you’re obsessed with continuity or merely the idea of it, this series is a comic binger’s dream. 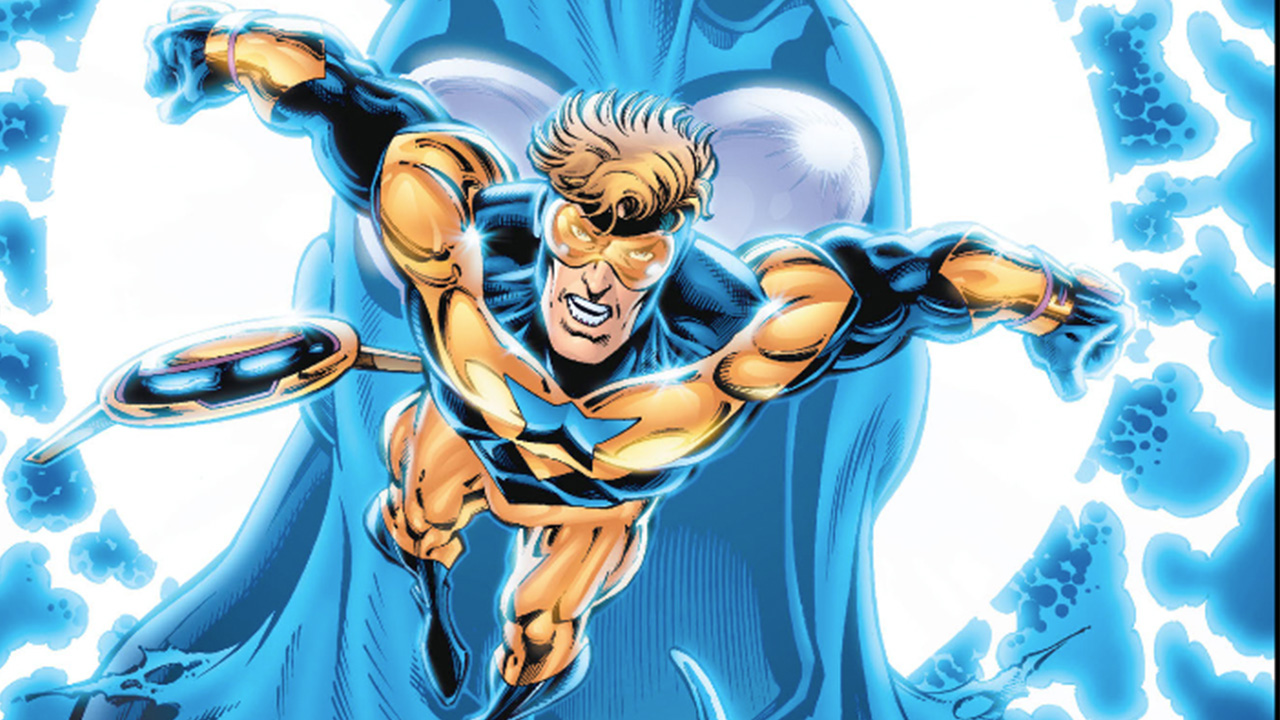 * 52 PICK-UP: If you’re as big a fan of the 52 series as we are, then Booster Gold is the perfect place to keep on reading. It’s got all the magic of an expansive, sprawling world at the fingertips of a relatable but underrated hero that gave the year long event its magnetic charm.

* BUT WHAT IF?: Throughout the series, Booster revisits key moments in the history of the DC timeline, and discovers the disaster which may befall the universe if things happened differently. What if Sinestro got Abin Sur’s power ring? Could The Killing Joke have ever been avoided? And if Booster had the chance to save Blue Beetle from the betrayal of Maxwell Lord… would he take it? Infinite possibilities awaits.

* IT’S ABOUT FAMILY: The reason Johns’ Booster Gold works is really the same reason that 52 does: for all its ambition, what grounds the series is the connections between the people involved. Booster’s often forgotten sister Goldstar returns to play a pivotal role which makes your heart swell even if you’ve never known her before. Rip Hunter, Blue Beetle, and the people they love all play important parts in stirring moral quandaries which weigh the needs of the many against the needs of the few.

* THE GOOFER BECOMES THE GOOFED: On top of all that, Booster has to deal with his complete goober of a 21st century ancestor to keep time traveling villains off his tail. If you can’t imagine Booster getting his act together, wait until you see him trying to teach someone else how to do it. 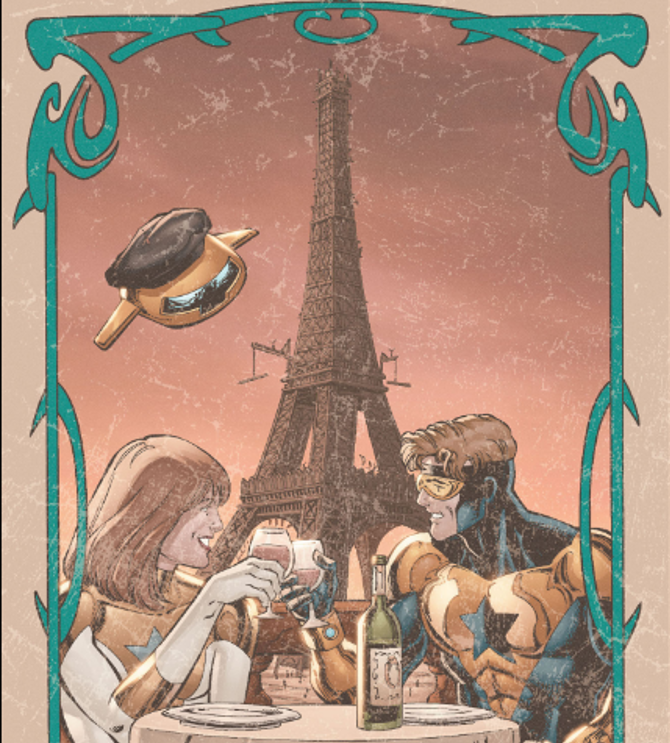 Everybody loves a time travel story! Who doesn’t like to imagine life in the distant future, or fantasize about fixing the mistakes of our past? Some heroes present the fantasies of flight, or wealth, or invulnerability, but Booster’s struggle is a much more tempting one: the power to influence time itself. Geoff Johns’ Booster Gold series is about what really makes a hero is what one does with the opportunities given to them. In an industry where character stagnation is a constant concern, this Booster Gold series is a refreshing spring of genuine character growth.

Is Booster Gold the greatest hero YOU’VE never heard of? Sound off in our Community and tell us if you’re on board with the Gold Standard!