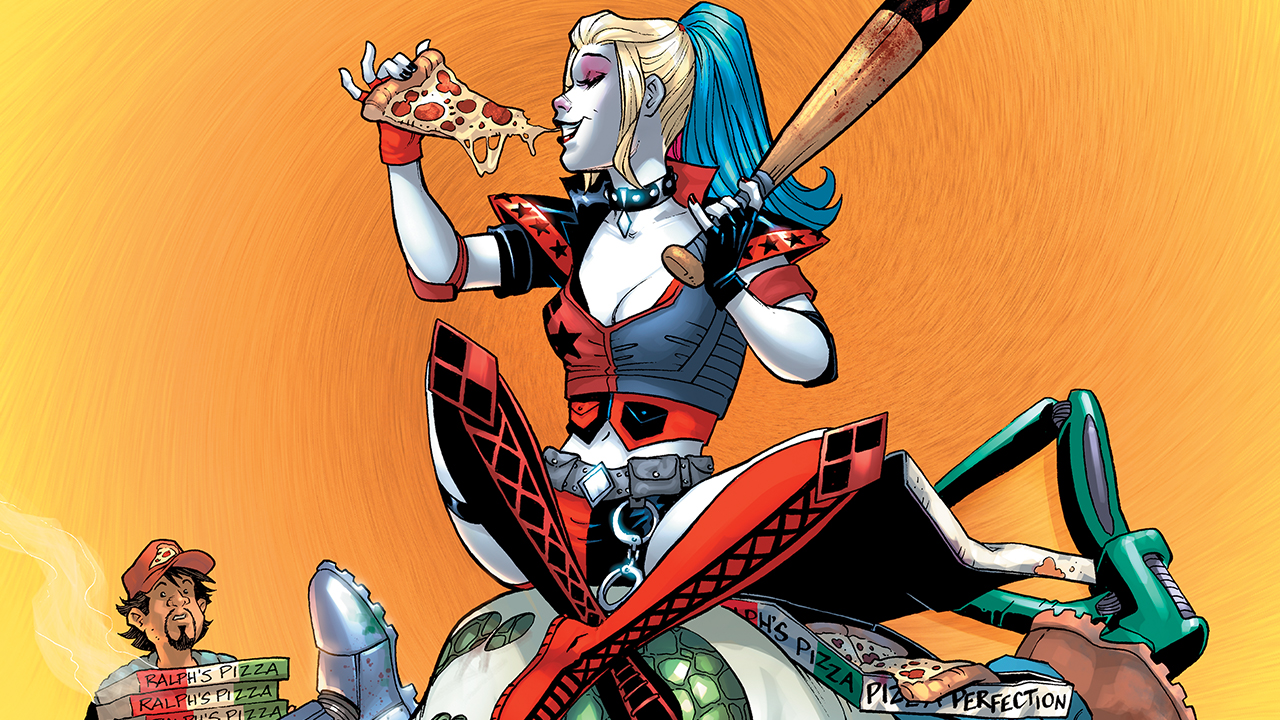 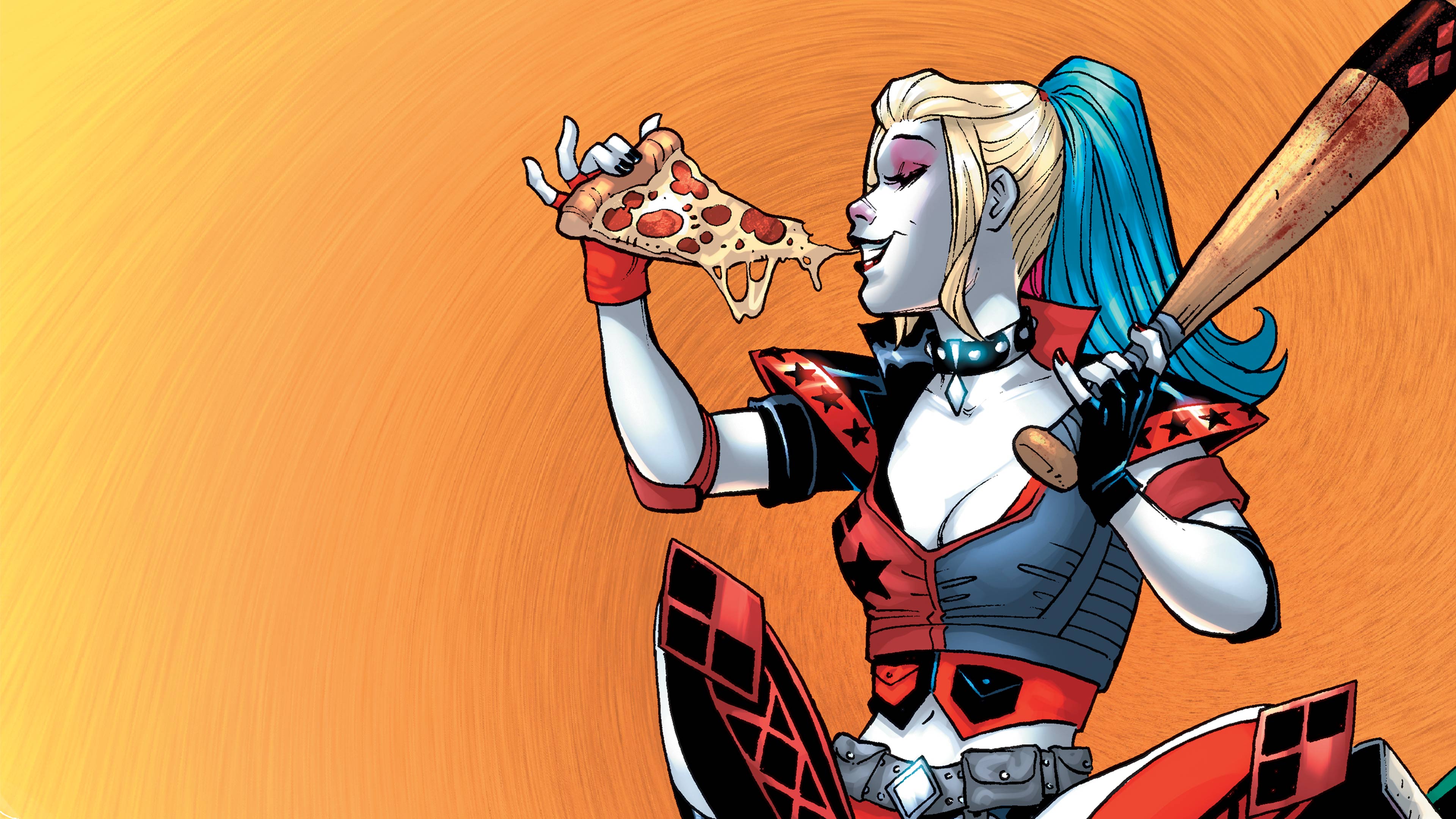 The Best Pizza Pairings for Your DC Universe Binge Session

What's better than dinner and a show? There’s no dispute: the absolute best food for watching obscene amounts of television at a time, whether alone or with friends, is pizza. Though with a near infinite combination of toppings and styles, it can be difficult to determine exactly what kind of pizza will be most conducive to enhancing your viewing experience. But worry not! Our finest superhero pizza sommeliers are on hand to provide you with the perfect pizza and DC TV series for your enjoyment. Mangia, mangia!

SWAMP THING — This one is a no-brainer, of course: Veggie Lovers. The emphasis here, though, is on “lovers.” Sure, just like ol' Swampy, vegetables seem scary at first. But if you take the time to really appreciate them for what they are, you’ll end up as head over heels for them as Abby Arcane.

SHAZAM! — Nothing but extra cheese will do for the Big Red Cheese! Extra cheese congeals quickly, so make sure you serve it nice and hot. Nobody ever accused this '70s series of taking itself too seriously. But sometimes after a long, hard day, the best thing you can do for yourself is to get lost in a goopy sea of cheesy goodness.

KRYPTON — Stuffed Crust. There’s something strange going on beneath the surface of this pizza, and no one can be sure just what until we investigate for ourselves. Take a bite before it explodes! 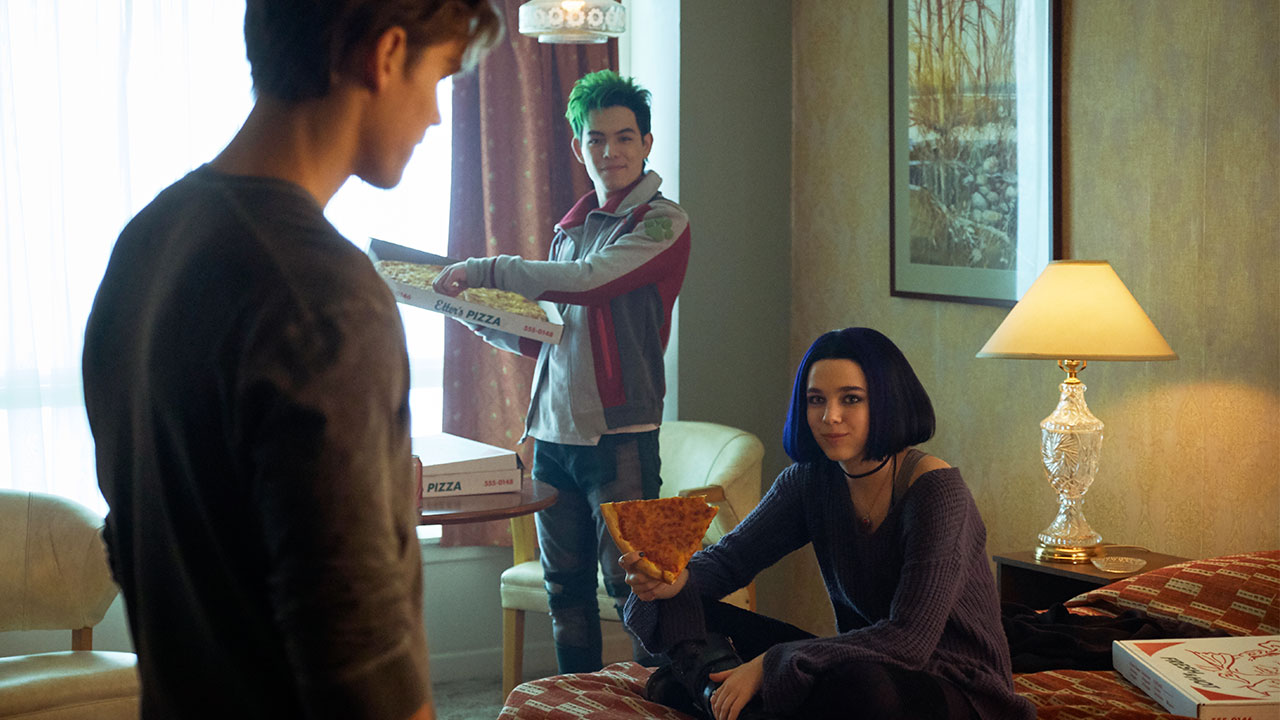 TITANS — 'Titans' is a show that pulls its audience in a lot of different directions, and has many things going on. Each member of the team has their own drama and hang-ups to resolve. But together, they offer a variety that anyone can enjoy. For ‘Titans,’ order an extra large pizza that’s one quarter plain for Robin, one quarter black olives for Raven, one quarter veggies for Beast Boy, and one quarter hot peppers for Starfire.

BATMAN: THE ANIMATED SERIES — A nice, restaurant-quality pizza margherita. Simple, classic, elegant. The standard by which all other pizzas are judged. Don’t scarf this one down; savor every perfect bite. And every perfect episode.

THE FLASH — Where’s the closest pizza place to your house? It doesn’t matter what you get on it; just make sure it gets to you FAST. You need pizza, and you need it NOW. If you’re daring, leave instructions that there’s an extra big tip in store for the delivery guy if they rush. Your craving is pizza, and it’s the fastest food alive. 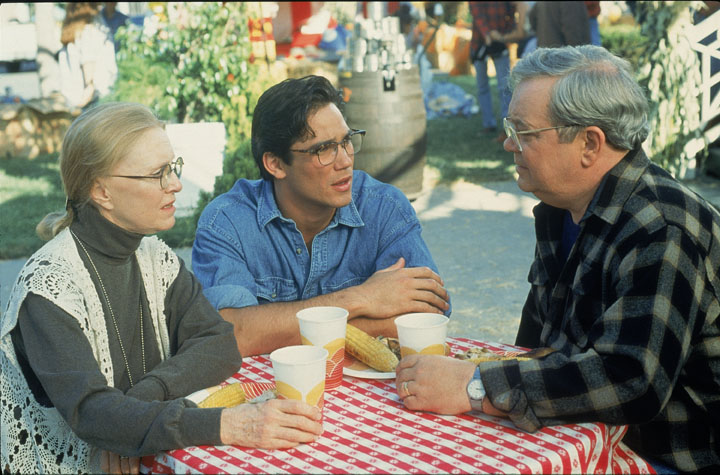 LOIS & CLARK: THE NEW ADVENTURES OF SUPERMAN — Hawaiian Pizza. For lovers of the action-based content of DC Universe, a romantic comedy like ‘Lois & Clark’ can be a strange viewing experience. And for traditional pizza lovers, the toppings on a Hawaiian style pie can be as controversial as they come. But just like the ebullient chemistry between Teri Hatcher’s Lois and Dean Cain’s Clark, the ham and pineapple combination proves just the right balance of sweet and savory.

LEGION OF SUPER-HEROES — Deep Dish. Like the Legion of Super-Heroes and the rest of the DC Universe, the relationship between a Chicago-style deep dish pizza and the more common, thinner crust pizzas can feel like they’re millennia apart. And with scores of Legion-unique characters and settings to learn, getting a start with the Legion can feel like jumping into the deep end. But once you’ve become comfortable with its texture, other pies simply won’t do. 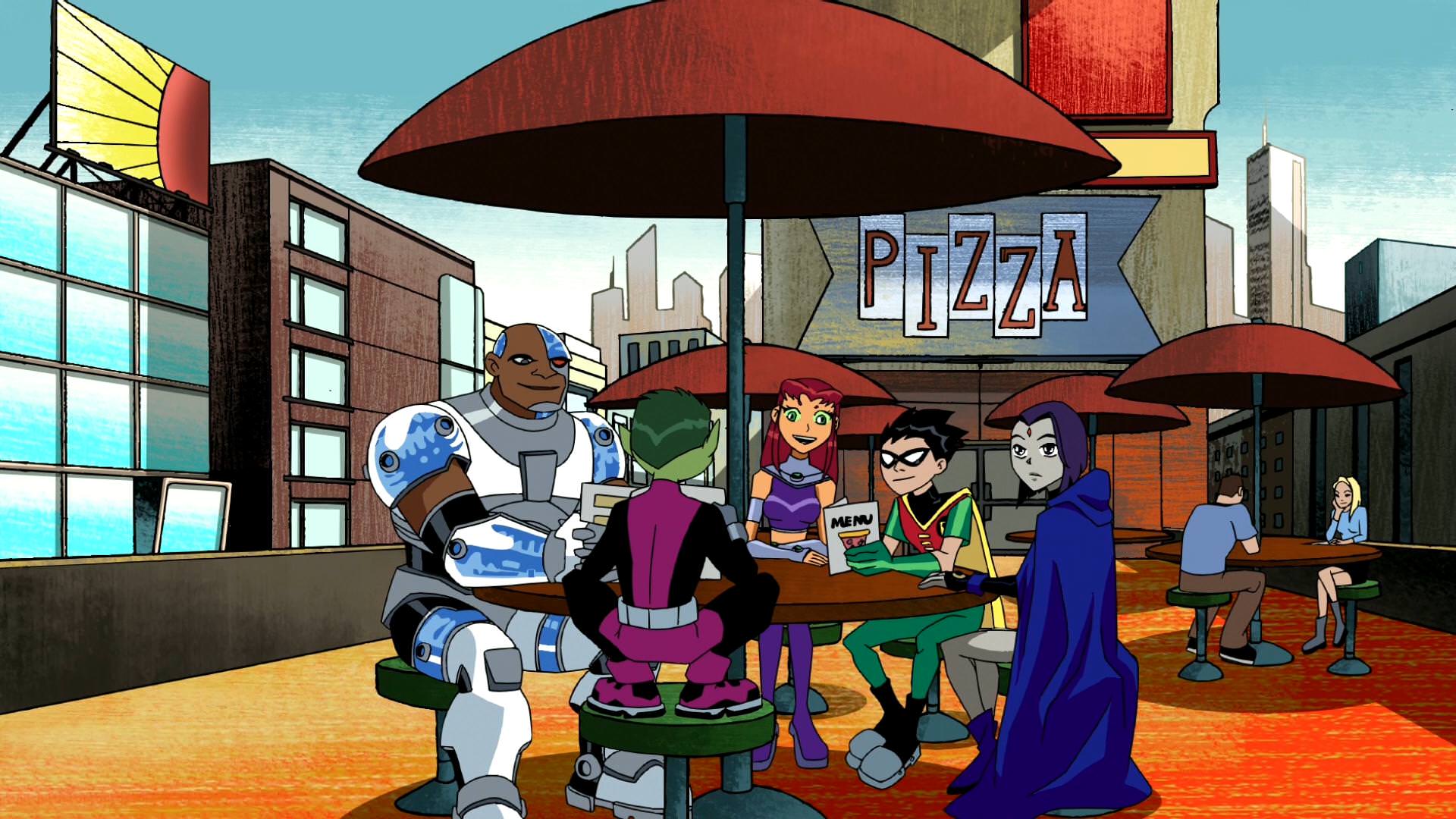 TEEN TITANS — Pepperoni. There’s a reason that the Titans’ rallying cry is “Truth, Justice, Pizza.” For kicking back with your best friends and watching a whole metric ton of anime-inspired hijinks, nothing beats your classic pepperoni. But if you’ve got some Beast Boys in your party… tofu really isn’t that bad, we promise.

CONSTANTINE — Mushrooms. Not THAT kind of mushroom, you tosser. Though, you never know… when it comes to Constantine, trust no one but yourself. There’s something eerie about a living organism that lies somewhere between plant and animal like a fungus. But hey, that also describes some of Johnny’s best mates. For bonus points, make sure to slice your pie into a pentagram.

BIRDS OF PREY — BBQ chicken wings. This California-based pizza delicacy can seem like an unnatural combination but -- okay, you got us. This one’s for ‘Birds of Prey,’ because there’s birds on it. Just eat your chicken pizza. Like the show, it’s more enjoyable than you might think! 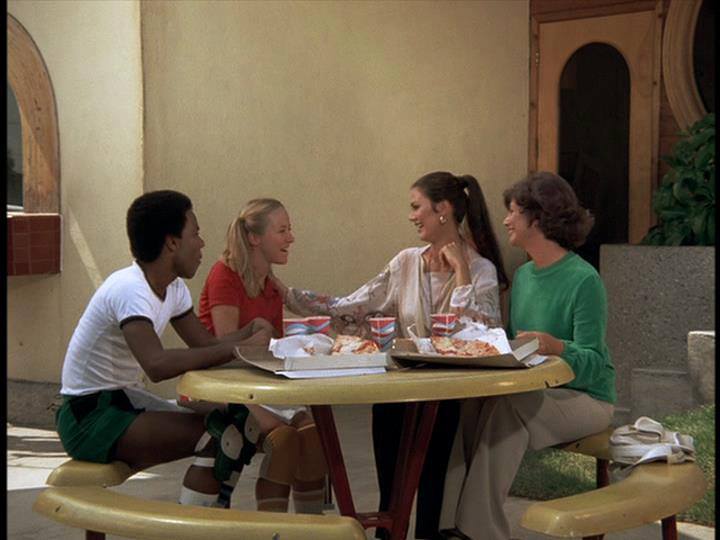 WONDER WOMAN — Greek Pizza. Perfectly suited for Themysciran dining, this traditional pizza made with plenty of olive oil will light up your room like Lynda Carter’s smile. Top it with olives and feta cheese to complete the experience! But don't forget the anchovies; they're Diana's favorite!

STATIC SHOCK — Microwave. Take a frozen pizza or some leftovers from your last binge, and zap that sucker until it’s ready to eat! PRO TIP: put a glass of water in the microwave with your leftovers, and the pizza’s crust will stay nice and crisp.

DC NATION SHORTS — Pizza Rolls. These tasty little morsels are just short enough for a quick pick-me-up wherever you happen to be on the go. So have some hot pizza rolls on hand for a pop of flavor that should last the minute you need to enjoy this mini-viewing experience. 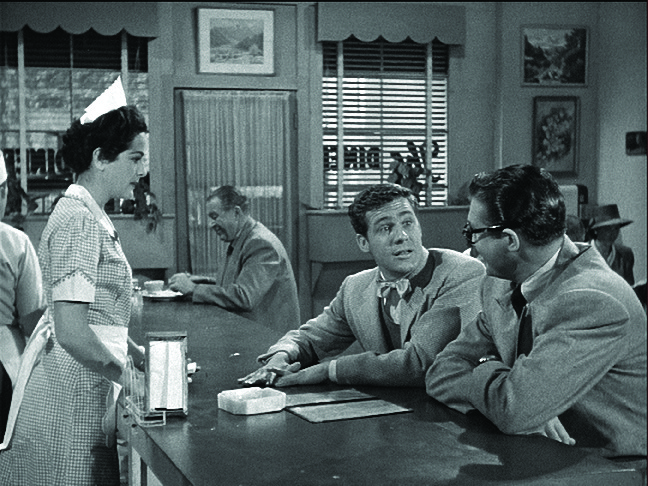 ADVENTURES OF SUPERMAN — Call your dad, and find out what HIS favorite kind of pizza is. If the place he used to go for a slice as a kid is still open, maybe try ordering from there. Watch together, and reminisce about how they don’t make ‘em like they used to.

BATMAN: THE BRAVE AND THE BOLD — ‘The Brave and the Bold’ is all about combinations of the standard with the obscure. A chance to try something you’ve never really considered as an A-List choice before. So for this show, order a half-and-half: order one side with your favorite topping- or even completely plain- and then take a look at your pizzeria’s topping menu, and make sure the other half has something you’ve NEVER tried before. You just might pick up a new favorite!

DOOM PATROL — A calzone. A calzone?! Yes, you heard us. DC Universe’s ‘Doom Patrol’ is all about taking the Super Hero genre as you know it, flipping it on its head, and folding it until you’re left with something familiar and strange all at the same time. And now, we ask you: what really is a calzone but a pizza folded in on itself? Flex on that one, Mentallo.

SUPER FRIENDS — Cereal Pizza. ‘Super Friends’ represents the absolute pinnacle in '70s and '80s Saturday morning cartoon watching, an exercise that’s always incomplete without a heaping bowl of sugar-blasted breakfast cereal. Topping pizza with your favorite varieties and combinations of breakfast cereal has become a trendy practice in certain hipper parts of the country. So if you’re going to try it at all, this is the perfect opportunity. In fact, you know what? Forget the pizza! It’s cereal time!

GREEN LANTERN: THE ANIMATED SERIES — GLTAS is all about exercising willpower and imagination. So for a ‘Green Lantern’ viewing… make your OWN pizza! Drive yourself to create a meal you can be proud of! We guarantee that any pizza that materializes from your own hard labor is all the sweeter. And we get it, you’re gonna want to use some green toppings. It’s not required for this, but if that’s what’s in your heart, go nuts. 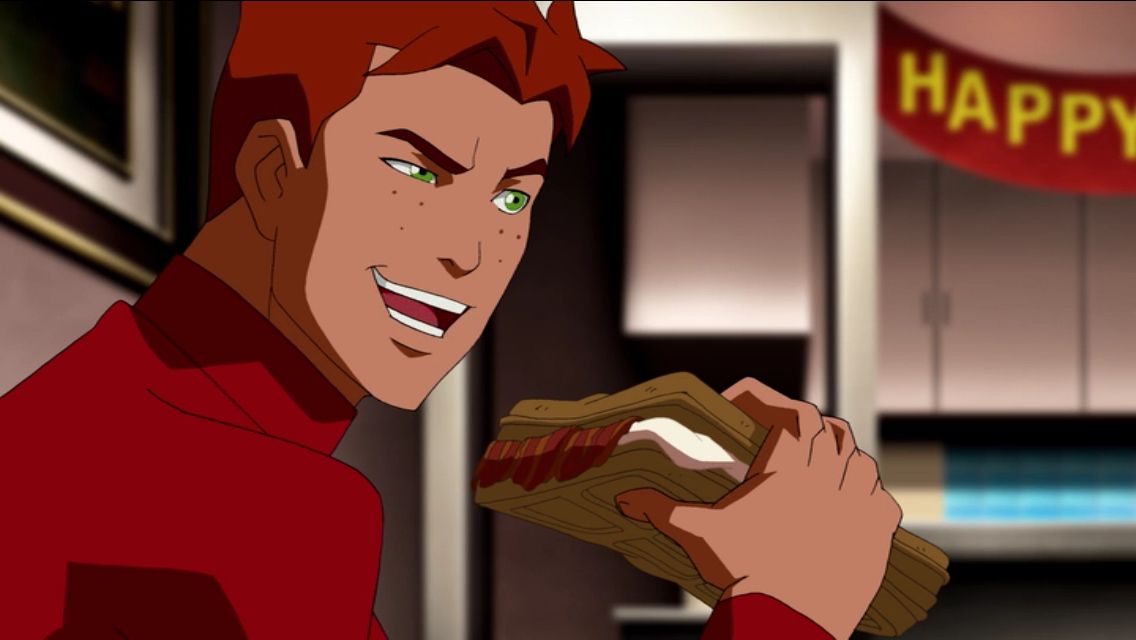 YOUNG JUSTICE — THE WORKS. With uncountable characters, ongoing storylines, and richly layered worldbuilding, there’s no more nuanced Super Hero world you can find on TV than the one in ‘Young Justice.’ So many moving parts surprisingly intersect and enhance one another with every new episode, and every piece has its own unique flavor and texture. For ‘Young Justice,’ go for broke and order a pizza with absolutely everything on it. SYMBIOSI!

What's YOUR favorite pizza/DCU combination? Sound off in our Community!