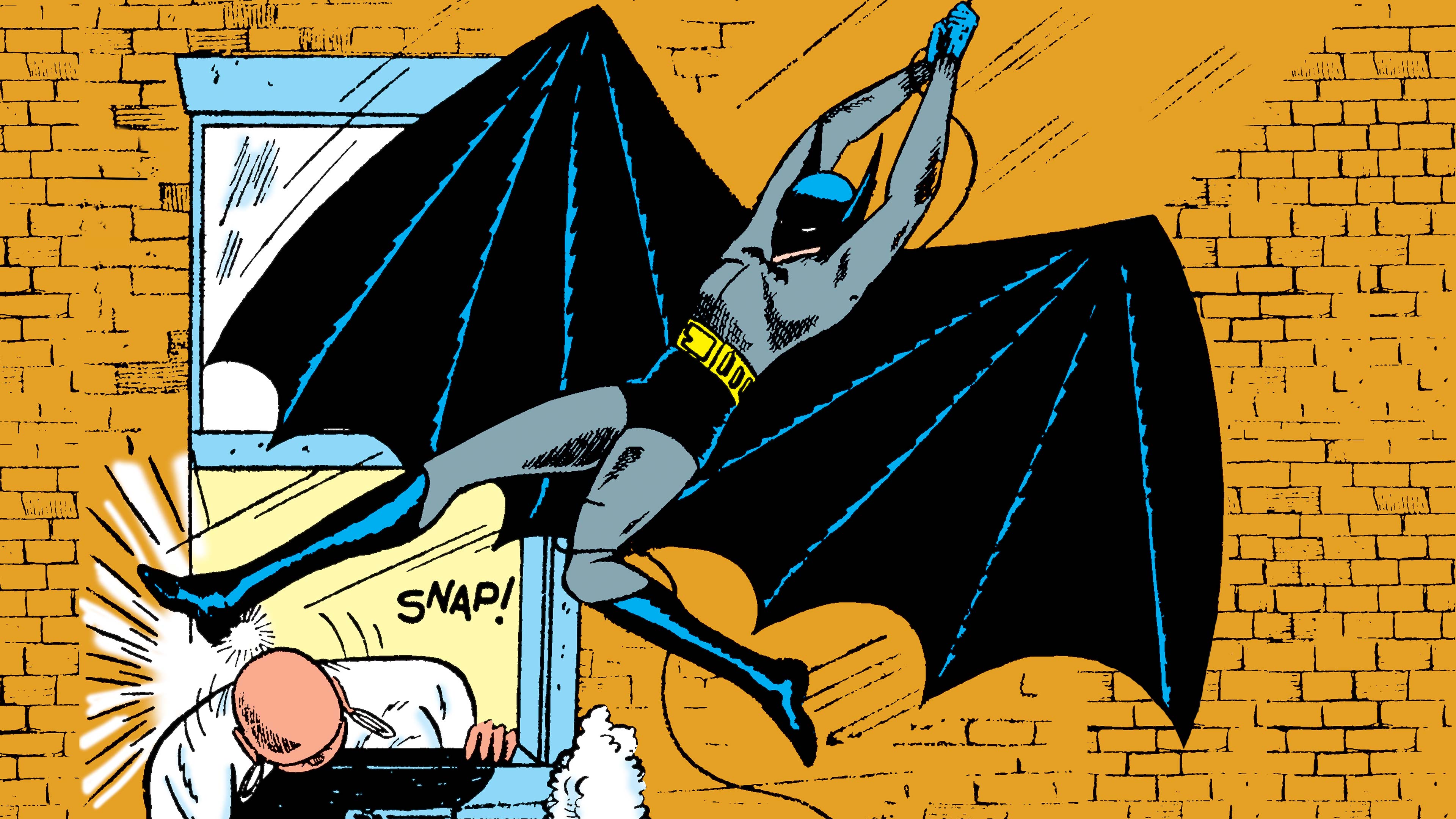 One of the most ironclad elements of Batman's character is his long-standing code of not killing. Coupled with a general rule against the use of firearms, these aspects of his morality have been demonstrated in dozens of stories, from "Death in the Family" to "Hush" to "Under the Red Hood." However, it’s common knowledge that in the first year of the character’s existence, he would engage with enemies employing deadly force. This wasn’t uncommon for many pulp heroes at the time, especially for characters such as Zorro or the Shadow who inspired Batman. Nevertheless, it’s an entertaining and informative exercise to see how Batman's morality developed by observing the ways in which he previously disposed of his adversaries. So, let’s go back to the very beginning of his appearances in ‘Detective Comics’ and list every time Batman employed deadly force in the Golden Age!

Again, it should be repeated that storytelling devices were different back in the golden age of pulp storytelling. The dispatching of villains using fatal means was a simple shorthand device that illustrated good vanquishing evil. Like the dragons getting destroyed in the fairytales of old, there was comparatively little sympathizing with the villains in the old comics. In Batman’s first appearance titled “The Case of the Chemical Syndicate”, the Dark Knight first appears on a rooftop at the scene of a murder-robbery. He quickly knocks out the first criminal, but body-flips the second off of the roof. It’s possible the goon could’ve survived, as it doesn’t look to be a very high fall, but we’ll count it just to be safe. Yet there’s no mistaking the fate of the next crook who went up against Batman. At the end of the story, Batman quickly punches the culprit before he can fire his gun, and the man flies backward into an open vat of acid. To drive the point home, Batman comments on his fate by remarking “A fitting end for his kind.”

In the next issue, Batman finds himself in a similar tangle when combating jewel thieves atop a high-rise apartment roof. The battle carries out the same, with Batman knocking out one of the gunmen, and hurling the other off the roof. Yet the building is illustrated to be much higher up, so there’s hardly a chance the man survived. Driving the point home, the caption boxes introduce the police arriving at the scene as being led by the falling “body”, so it’s a definitive kill on Batman’s part. Yet he only displays fisticuffs with the other hoodlums in the issue, so we’re at a single notch for ‘Detective Comics’ #28.

In the first appearance of Doctor Death – Batman’s first reoccurring enemy – he whips out a lasso and catches the neck of Dr. Death’s assistant Jabah. While there’s no explicit indication that the burly henchman was strangled to death, the laboratory the men are inside of quickly catches fire. Jabah’s body is seen still laying on the floor before the fire consumes the building. In the follow-up story, Jabah is replaced by another henchman Mikail. The need for that replacement is obvious, and although Batman didn’t exactly start the fire that burned down the building, his actions did lead to the circumstances that caused Jabah’s death. 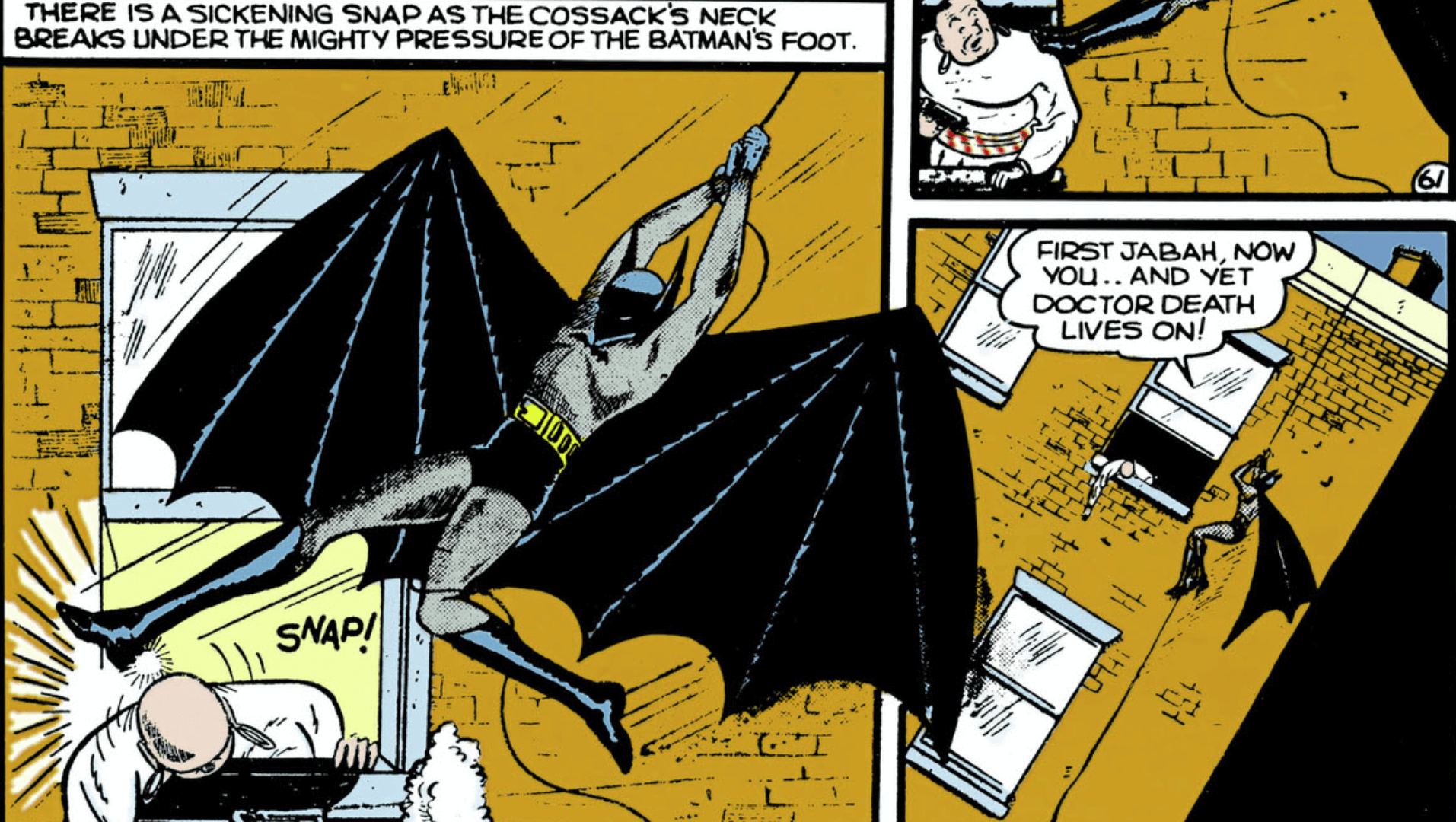 What happens in the second Doctor Death story is pretty self-evident. While being chased by new-to-the-job henchman Mikail, Batman swings towards the window the man is looking out of and kicks his head with enough force that it snaps his neck. Batman comments “First Jabah, now you..and yet Doctor Death lives on!” Interestingly enough, when Batman find Doctor Death he merely apprehends him, turning him over to the police. The bad doctor’s henchmen weren’t so lucky. 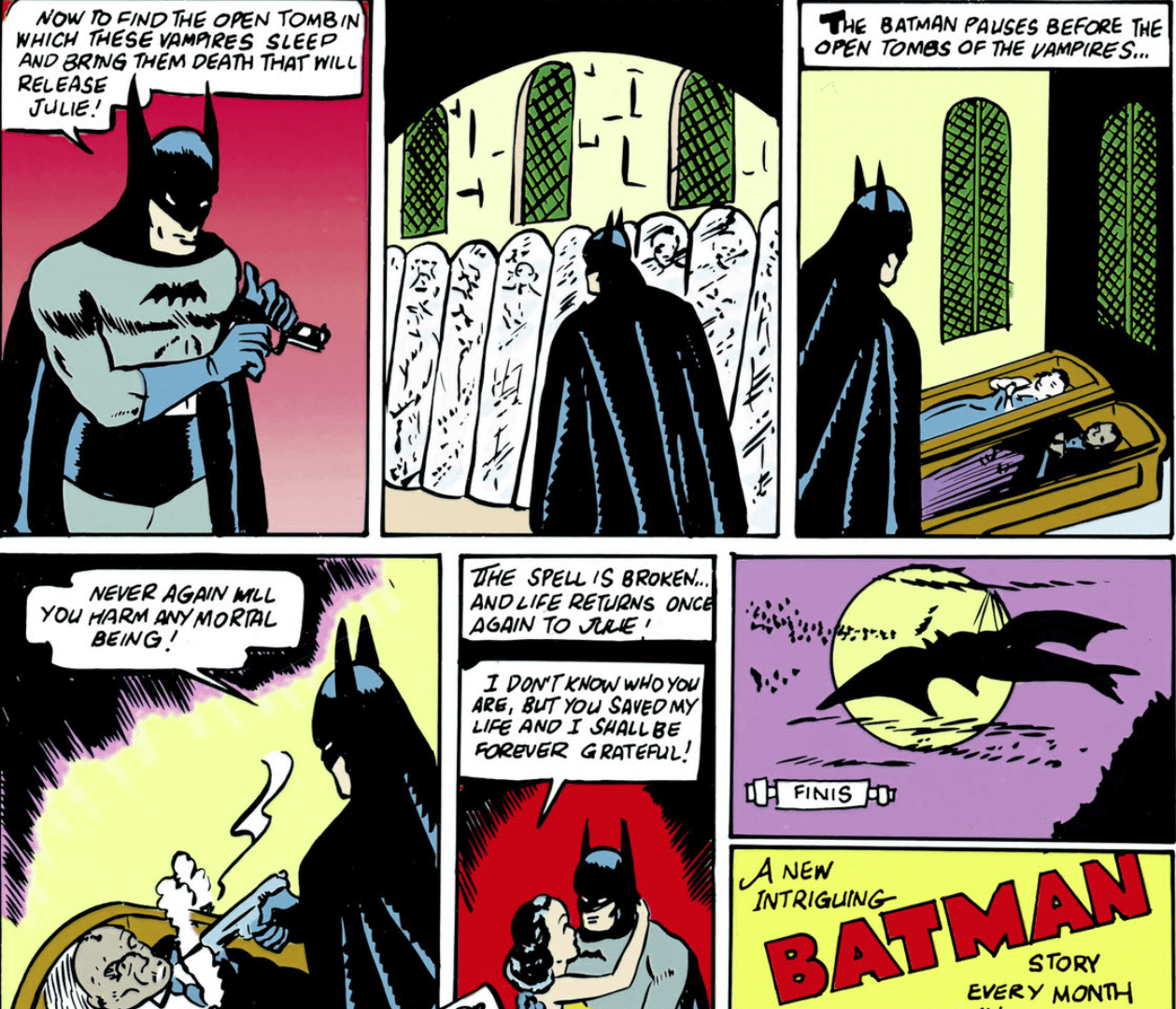 In the two-part storyline featuring the Mad Monk, Batman travels abroad to save the life of his newly introduced fiancée Julie Madison from a supernatural monk who at first appears to be a werewolf, then later is shown to be a vampire. He doesn’t take any lives in ‘Detective Comics’ #31, but at the conclusion of ‘Detective Comics’ #32 he melts silver into bullets and drills them into the sleeping vampires. Let’s note that in many versions of the vampire mythology they are creatures of the undead, so the ethical question of killing them becomes more complicated. Nevertheless, this is a famous ending from Batman’s Golden Age, and we’d be remiss if we looked over it.

Some of Batman’s most brutal body counts occur in this issue. While battling Dr. Kruger, a madman with a Napoleon complex, Batman is shot and left to die by a blast from a death beam. Kruger briefly leaves the room and returns with the deadly device, carrying out the execution with relish. However, we see that Batman escaped, having knocked out a guard and switched clothes with him. While faking one’s death is often useful to the average crime-fighter, the utter callousness of taking the time to switch clothing and dooming an errant underling must be commented on. Later, as Kruger flies his giant Dirigible to wreak havoc upon Gotham, Batman swings upon his escape bi-plane and throws a gas pellet, causing the madman to fall unconscious and crash into the river below. His body was later discovered by the police, solidifying this as a kill count. 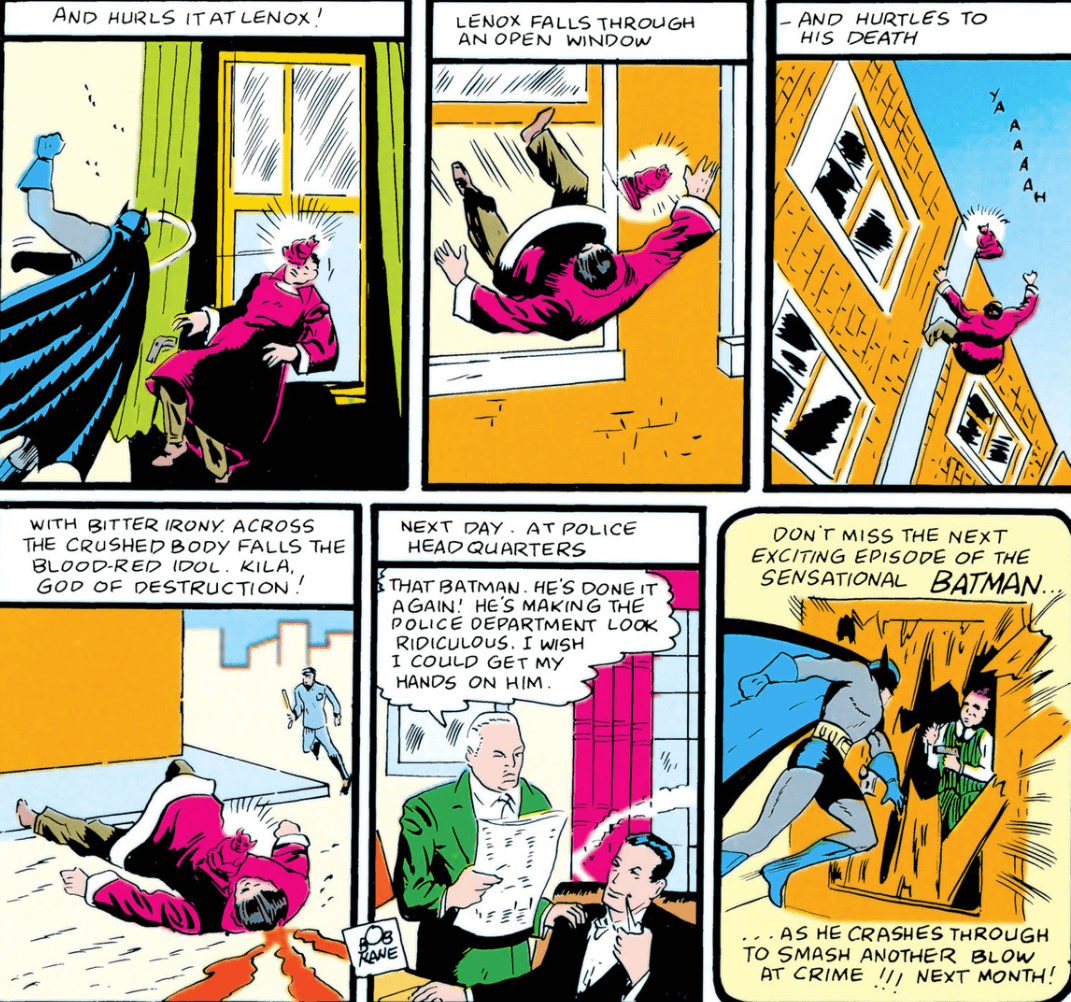 In “The Case of the Ruby Idol,” Batman engages with henchmen wielding swords. He kicks one in the face, sending him flying backwards into the sword of another crony. Later – when dodging gunfire in yet another high-rise apartment room – he chucks the prized ruby idol at the gunman, making him fall backwards through a conveniently open window, hurtling to his death (as the caption reads). In both of these instances, it can be debated whether Batman meant to kill these men. Nevertheless, that’s two more on the kill count. 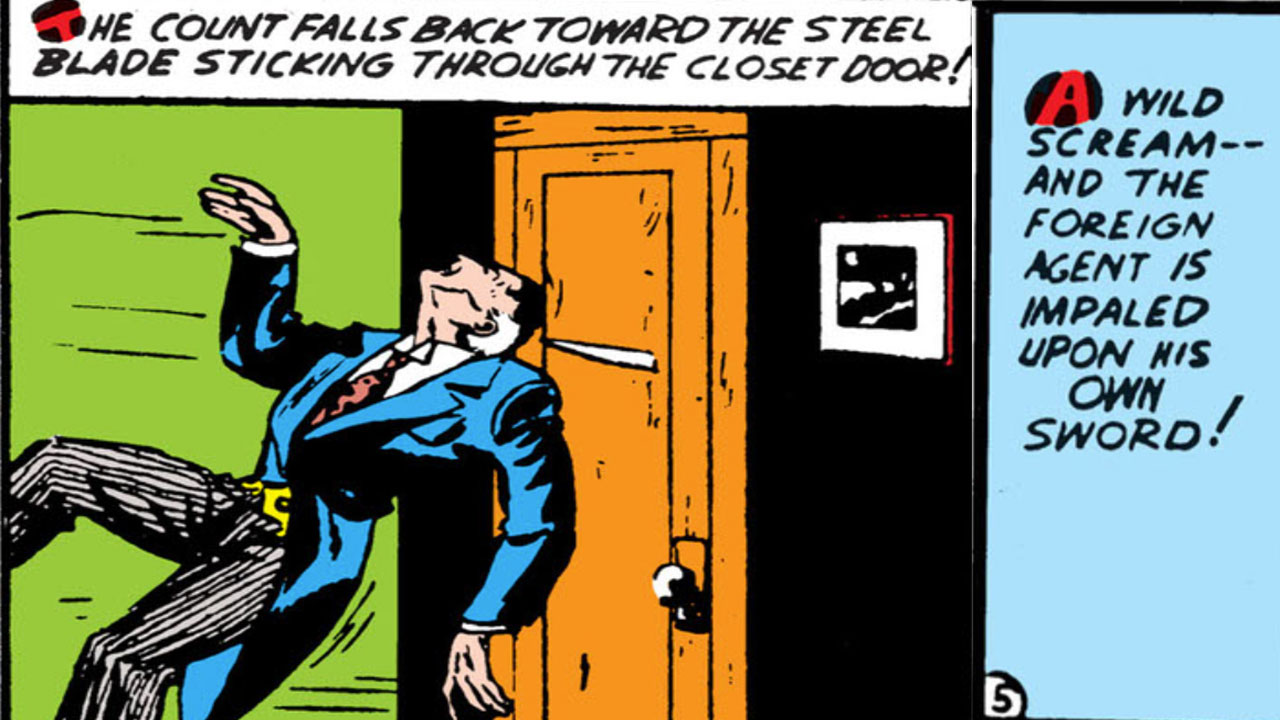 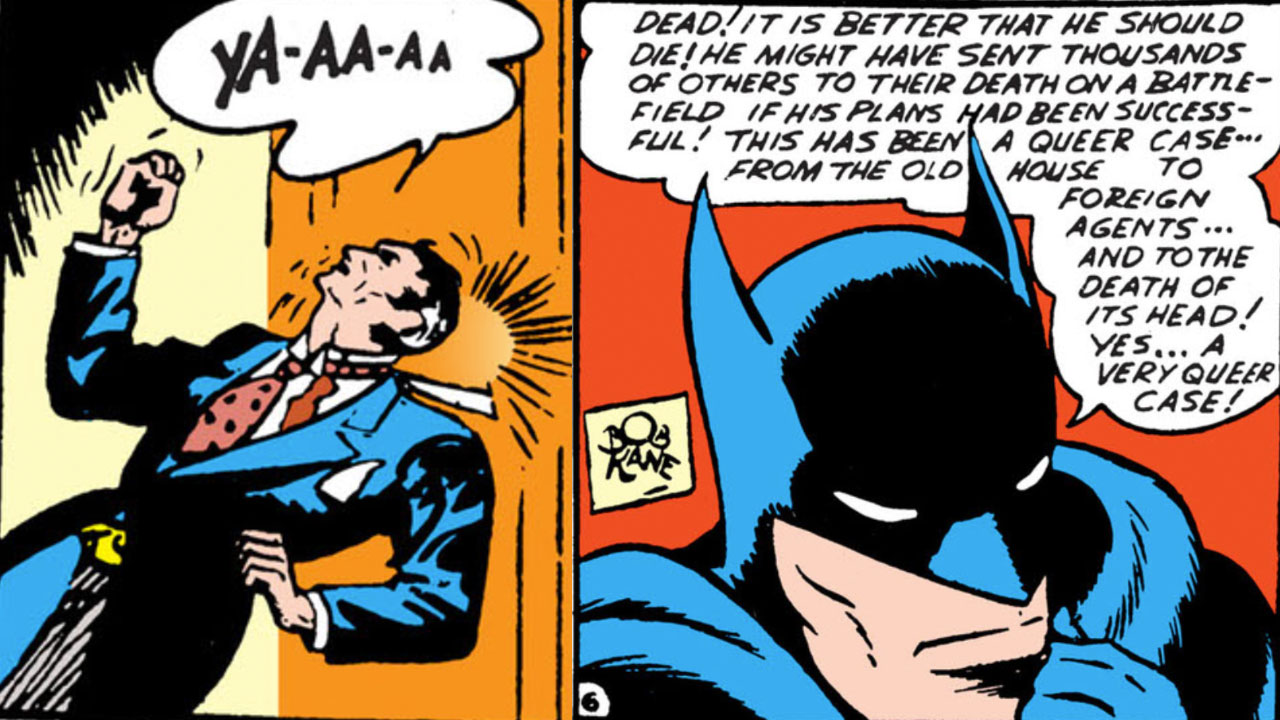 At the end of the story titled “The Spies,” Batman socks an evil count in the faces, flinging him backwards towards the door where a sword had been previously stabbed through the other side. The man’s gruesome fate is clear, and although Batman’s murderous intentions are again somewhat vague, he once again doesn’t appear to be too choked up about it. 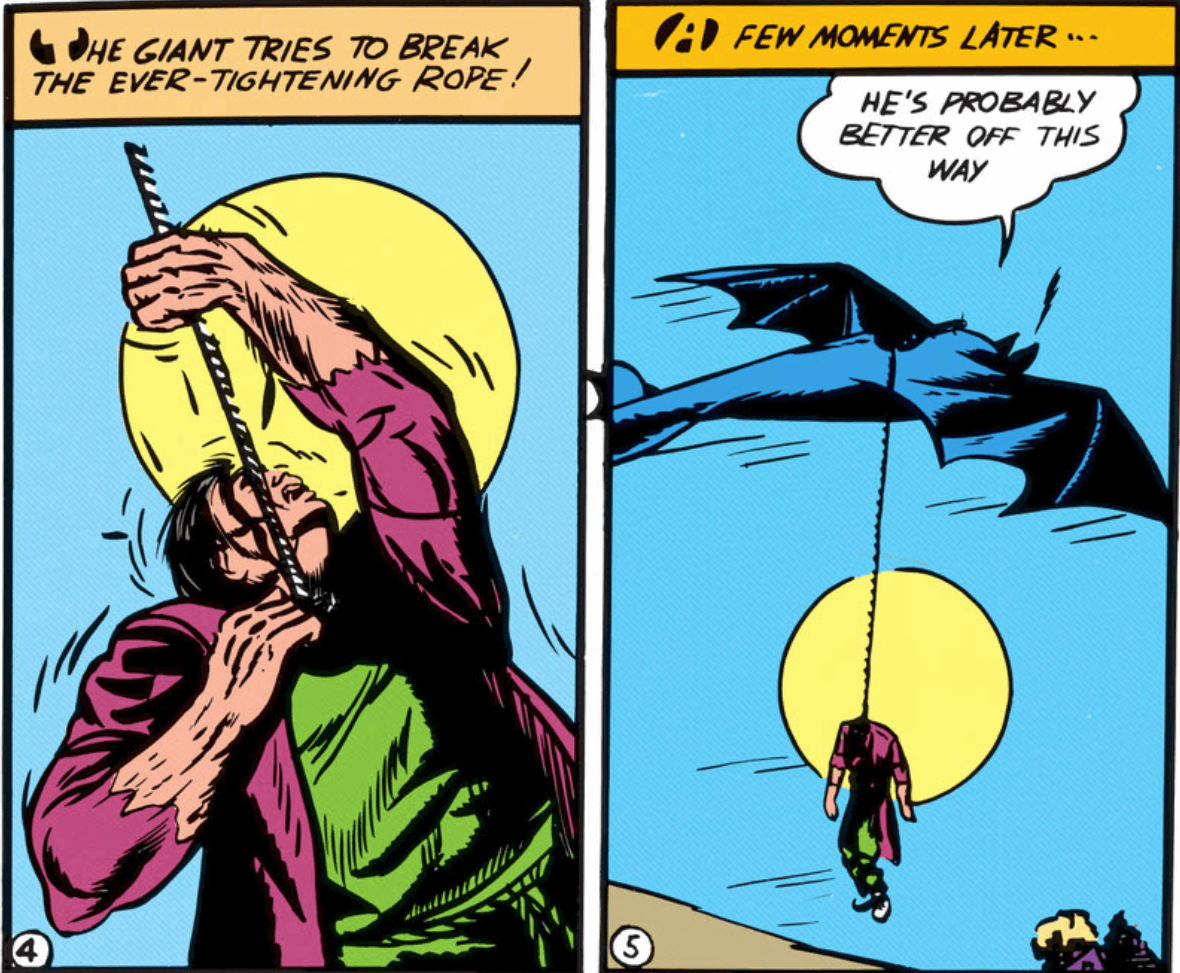 The carnage ramps up in the launch of Batman’s premiere solo title. In the horror-tinged “Professor Strange and the Monsters,” Batman encounters a returning foe Hugo Strange, who’s mutated inmates of an insane asylum into giant, bestial monster men. It’s a dark and gothic story where Batman has to act fast in order to save Gotham from Strange’s beasts. But the killing begins when he tricks two of the monster men advancing on him to start fighting each other. While he quickly cures himself of his own affliction from the Monster Men serum, the beasts beat each other to death, leaving Batman to remark “Just as I hoped.” He then chases two of Strange’s henchmen in a truck carrying one of the beasts towards Gotham, gunning the truck down from his Bat-Plane – killing two – and strangling the Monster Man with a giant-sized lasso. He later follows the remaining beast atop a large Chrysler Building-like skyscraper and gasses him until the beast plummets to his doom. This is by far Batman’s largest body count to date, nearing the end of his chronological kill count. However, we’ve one more issue to count. 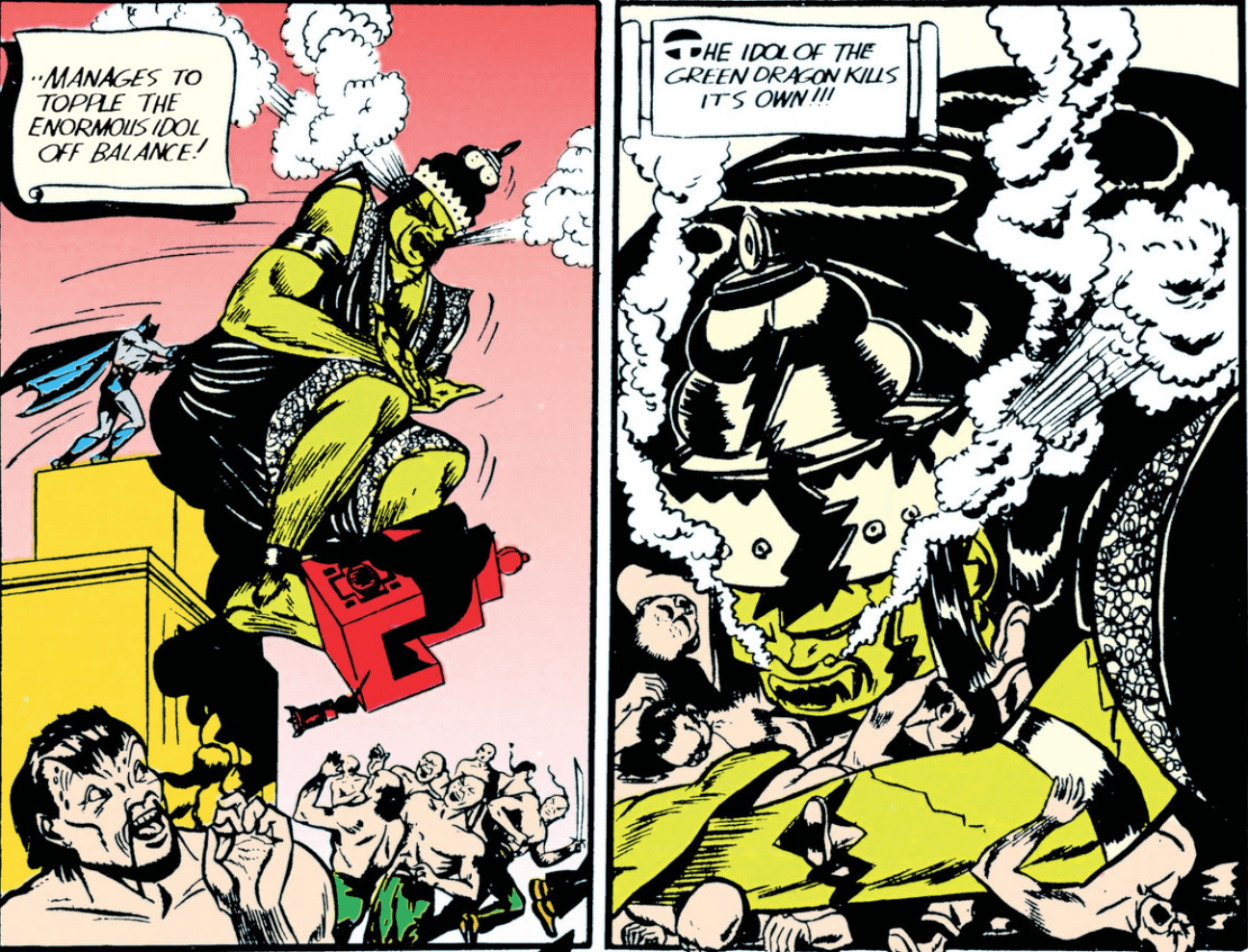 The Caped Crusader outdoes himself in “The Horde of the Green Dragon,” beating his record by shoving a gigantic idol of a green dragon on top of a group of doomed guards.

By this time in the character’s history, a year had passed. Robin had joined his war on crime, and villains like The Joker and The Cat(woman) began bedeviling him on a regular basis. Suddenly recurring villains became popular, and there’s been discussion amongst documentarians that Bill Finger grew uncomfortable with a character marketed to children taking such a caviler approach to violent methods. There are examples of Batman taking a non-lethal approach to fighting crime creeping into the series by the end of the first year. He laments taking life in the Monster Men story, arrested Doctor Death and others and even saved the Joker’s life so the Clown Prince can be carted off to jail.

However, there is one last notable kill count to mark, even though Batman isn’t the culprit. 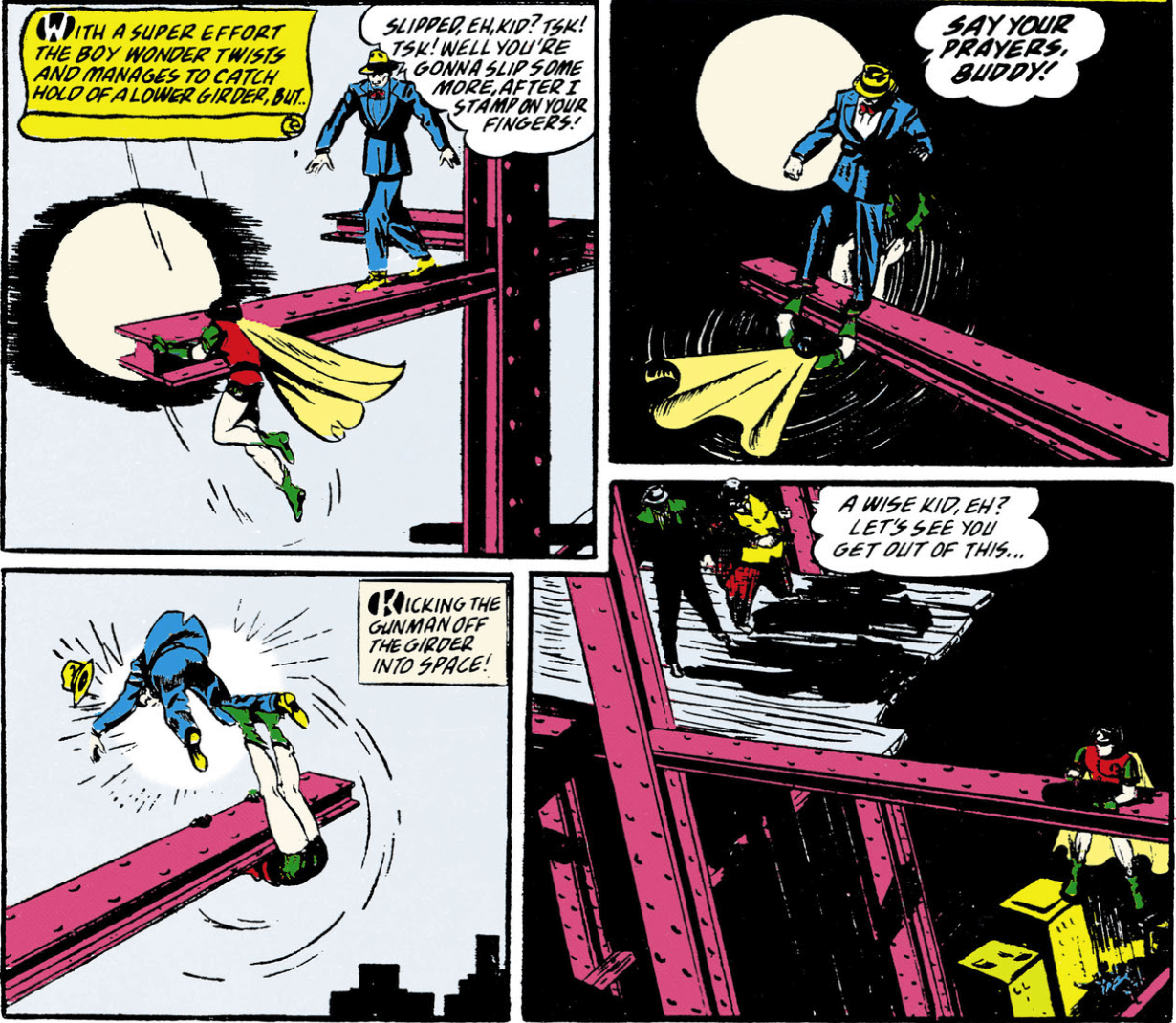 At the climax of “Introducing Robin, the Boy Wonder!” Dick Grayson is left dangling on top of a girder at a construction site. As a gangster approaches to kick him off, Robin swings his legs around and smacks the guy into the open air. You can even see the man falling to his death in the next panel! Clearly young Dick followed in Bruce's vigilante footsteps very close, even down to the killing.

Fortunately, Batman continued to evolve as a character as his creators solidifed his moral code of justice, eventually leading to the hero would not kill in his fight against crime.

What do you think about Batman's original use of deadly force? Talk about it in our Community!