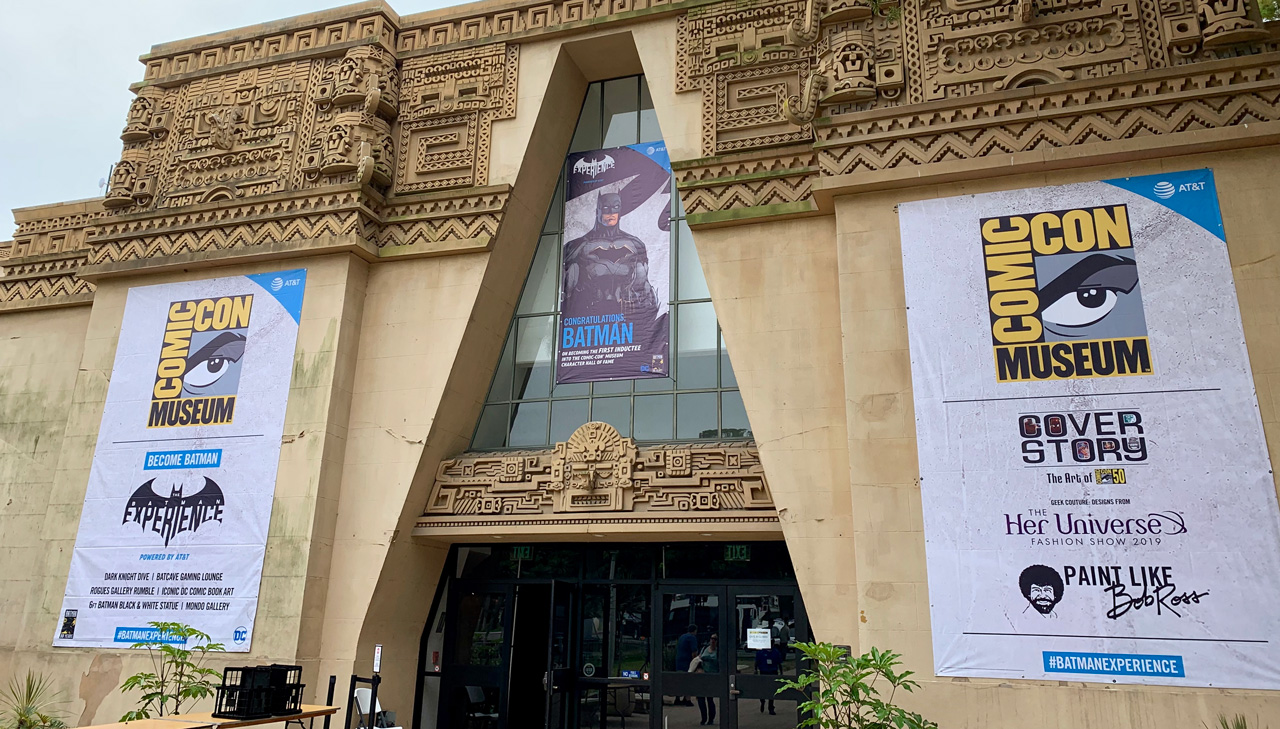 Long live the Bat! This year we’re celebrating the Dark Knight's 80th anniversary, and San Diego’s Comic-Con Museum had a very special gift for Batman this week – the Caped Crusader’s induction in the museum’s Hall of Fame. Fans gathered at the Comic-Con Museum, located in the city's Balboa Park, on July 17th for the induction ceremony...and "The Batman Experience." 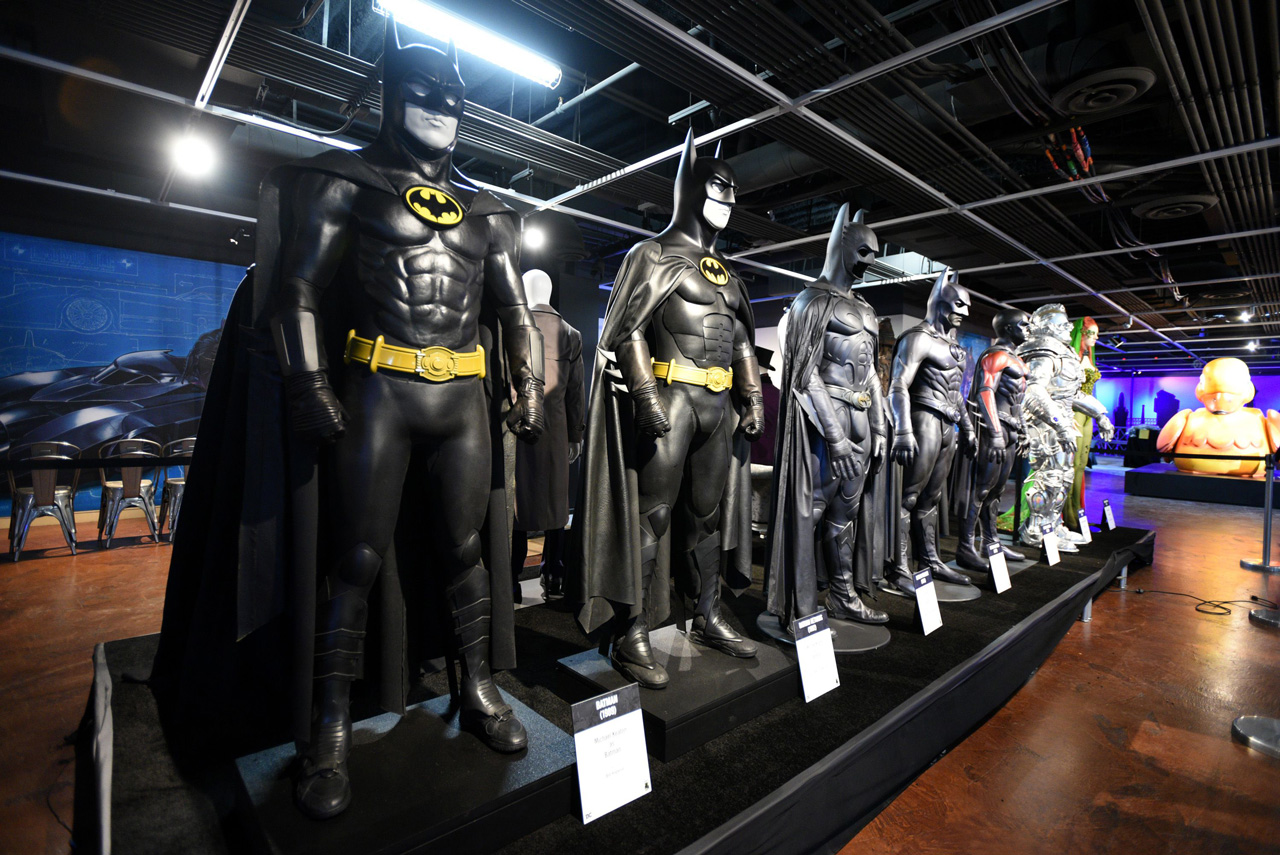 Although the Comic-Con Museum won’t be officially opening its doors until May 2021, this occasion was special enough for the curators to give fans a special preview of what their establishment will be like. The museum was filled with props from various media incarnations of the Dark Knight. The ‘Batman’ and ‘Batman Forever’ Batmobiles were parked inside for attendees to take selfies with. The Batsuits worn by Michael Keaton, Val Kilmer and George Clooney were on display alongside Chris O’Donnell’s Robin outfit. The Poison Ivy and Mr. Freeze costumes from ‘Batman and Robin’ stook alongside a set of outfits from the ‘Gotham’ television show, including the Batman suit from the recent series' finale. 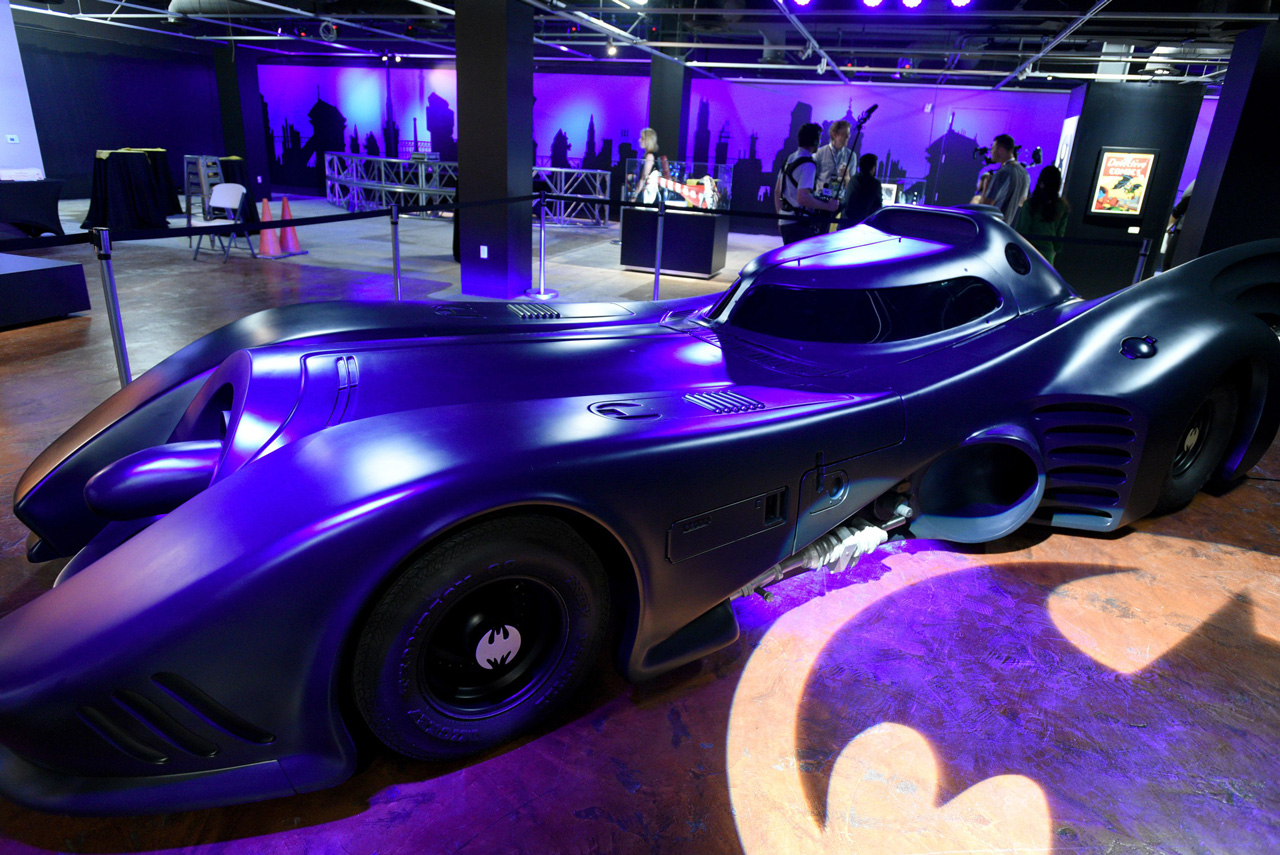 As guests explored the rest of the museum they came across a "Batman Gallery" of artwork from the greatest Dark Knight artists, and assorted film props from the Caped Crusader’s cinematic history. There were items as large as the Penguin’s giant Duck from ‘Batman Returns’ and as small as Two Face’s coin from ‘Batman Forever.’

A live string quartet set the mood by playing instrumental versions of the greatest tracks in Batman history. From the jazzy intro to ‘Batman: The Brave and the Bold’ to Seal’s “Kiss From a Rose” from the ‘Batman Forever’ soundtrack, the Dark Knight’s musical legacy was in full force. The stage also contained a 6-foot tall, one-of-a-kind Batman statue designed by legendary comics creator Todd McFarlane.

Like Wayne Manor, the Comic-Con museum had a Batcave beneath its ground floor, with more rooms full of goodies. A trophy case of all the "Batman: Black and White" statues greeted visitors as they descended the stairs.

Then, like Bruce Wayne himself, guests could enter the complex's training room, in which they could take part in what was dubbed the "Rogues Gallery Rumble." They were able to relieve their stress by striking a punching bag decorated with the faces of Batman’s greatest enemies. Best of all, , each time the bag was punched, the screens on the wall would display the words “BOW”, “BAM”, “SOCK” and more! They were punctuated with bright colors and musical notes that made attendees feel as though they were in an episode of the classic 1966 ‘Batman’ television series. A row of limited-edition Batman '66 pinball games completed the nostaligia trip.

But it was the museum’s official "Batcave Gaming Lounge" that housed a gamer’s paradise, with a row of televisions on which guests could play the greatest video games from the Dark Knight’s history. In addition to new favorites like the Arkham series and ‘LEGO Batman,’ fans were able to try their hand at old school classics like the Super Nintendo ‘Batman Returns’ game or the Sega Genesis ‘New Adventures of Batman and Robin’ game. The underground Batcave also a pair of very cool props from ‘The Dark Knight Rises’ -- the Bat computer console and Batman’s costume case. Although the Batcave is a fictional location, the Comic-Con Museum brought it to life so well it was easy to forget it wasn’t real. 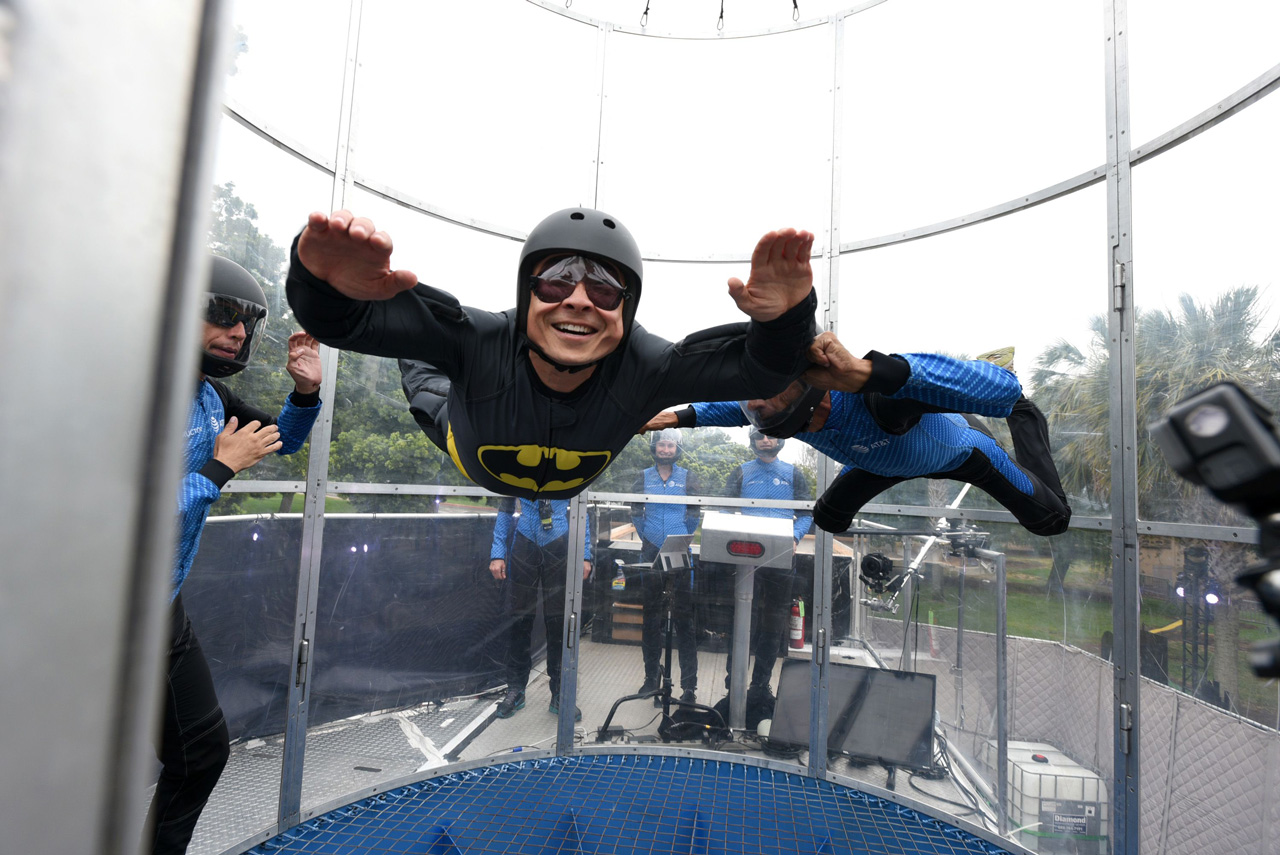 As below, so above... Fans were given a chance to experience Gotham City from Batman’s point of view, thanks to an interactive "Dark Knight Dive." After suiting up in special Batman jumpsuits, fans donned VR goggles for an indoor skydiving experience. With the help of wind effects, attendees felt like they were diving through the skies of Gotham as they pursued the villainous Scarecrow. If you’ve dreamed of being Batman, this may have been the most realistic way ever to live out your fantasies. For a closer look at the Dark Knight Dive, check out this Thursday's episode of ‘DC Daily’ to watch host Samm Levine take the plunge!

After cocktails and snacks, guests gathered around the buiding central stage for the main event. Important figures from Batman’s world gave heartfelt speeches about the Caped Crusader’s legacy, including actor Diedrich Bader, who voiced the Dark Knight in ‘Batman: The Brave and the Bold.’ After Bader summarized Batman’s storied history, David Mazouz, who played Bruce Wayne on ‘Gotham,’ took the stage alongside Jack Bannon and Ben Aldridge, who will star as Alfred Pennyworth and Thomas Wayne, respectively, on the upcoming Batman prequel TV series ‘Pennyworth.’ “Hi Dad,” Mazouz playfully said to Aldridge, before giving his own speech honoring the Dark Knight’s career. “Once he becomes Batman," added Mazouz, "he devotes every waking moment to putting himself at risk for the safety of others. For strangers." 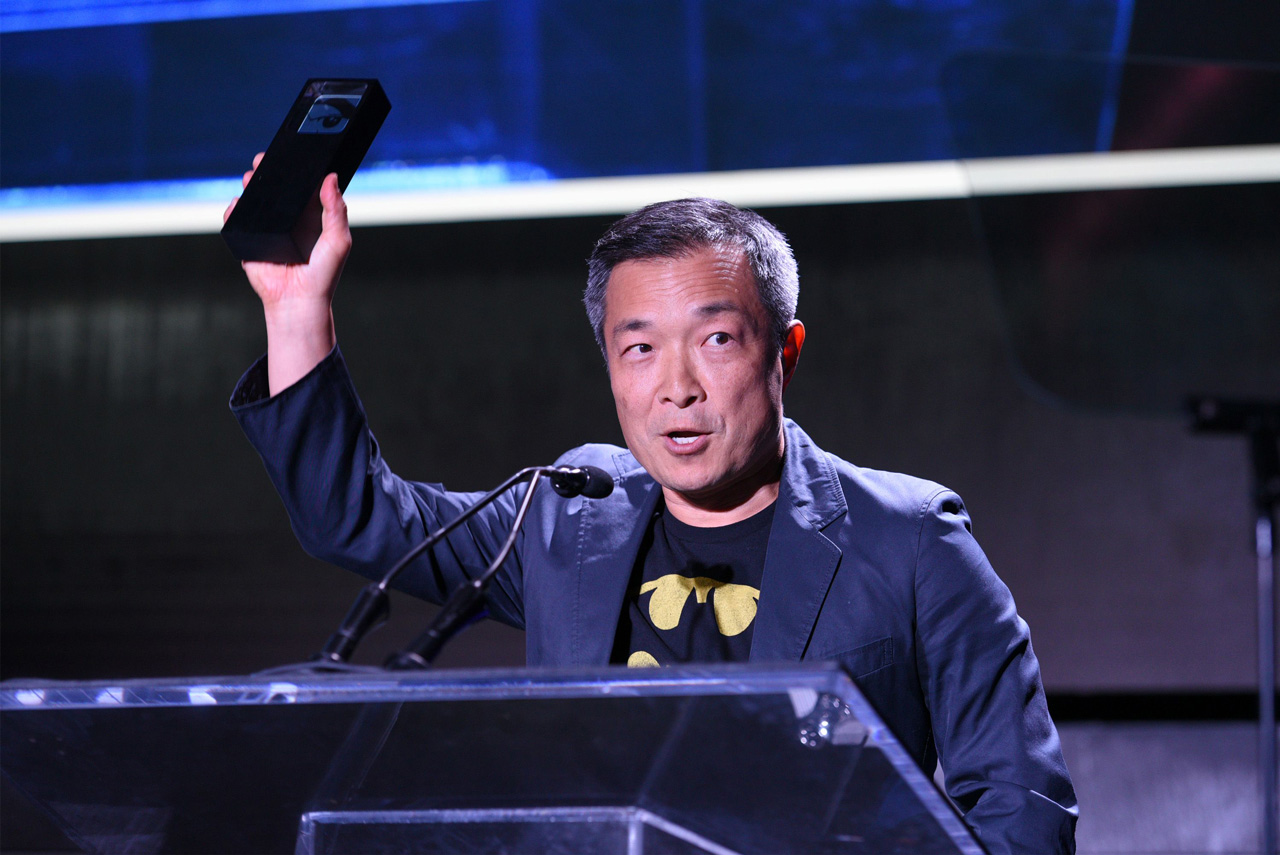 Before San Diego Mayor Kevin Faulconer ended the ceremony by welcoming everyone to Comic-Con 2019, DC Entertainment Co-Publisher Jim Lee came onstage to accept Batman’s Hall of Fame award. “He never steps up out of the shadows to claim credit or glory. So on a night like this, we choose to honor Batman ourselves, to celebrate the ideals he represents. And if you look around, you’ll surely see him here among us,” Lee said as he accepted the award.

"The Batman Experience" runs through Sunday, July 21st. If you're attending this week's Comic-Con, be sure to check it out!

Which character do you think should be inducted into the Comic-Con Museum Hall of Fame next? Let us know in our Community!