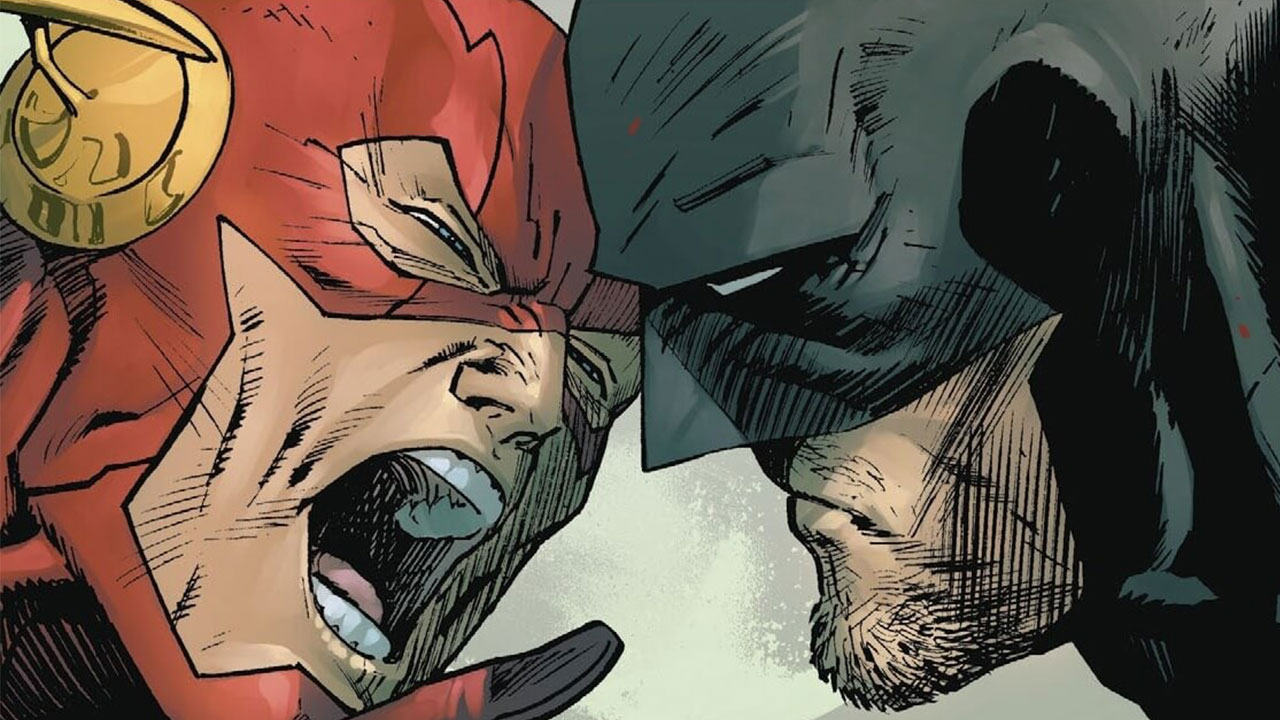 Batfan Friday: Fighting with The Flash!

The streets of Gotham are dangerous, but Batman and his peeps always have you covered. Welcome back to Batfan Friday, our weekly roundup of all the latest happenings from the spires of Gotham to the depths of the Batcave. The Bat has had a busy week, so let’s break it down… 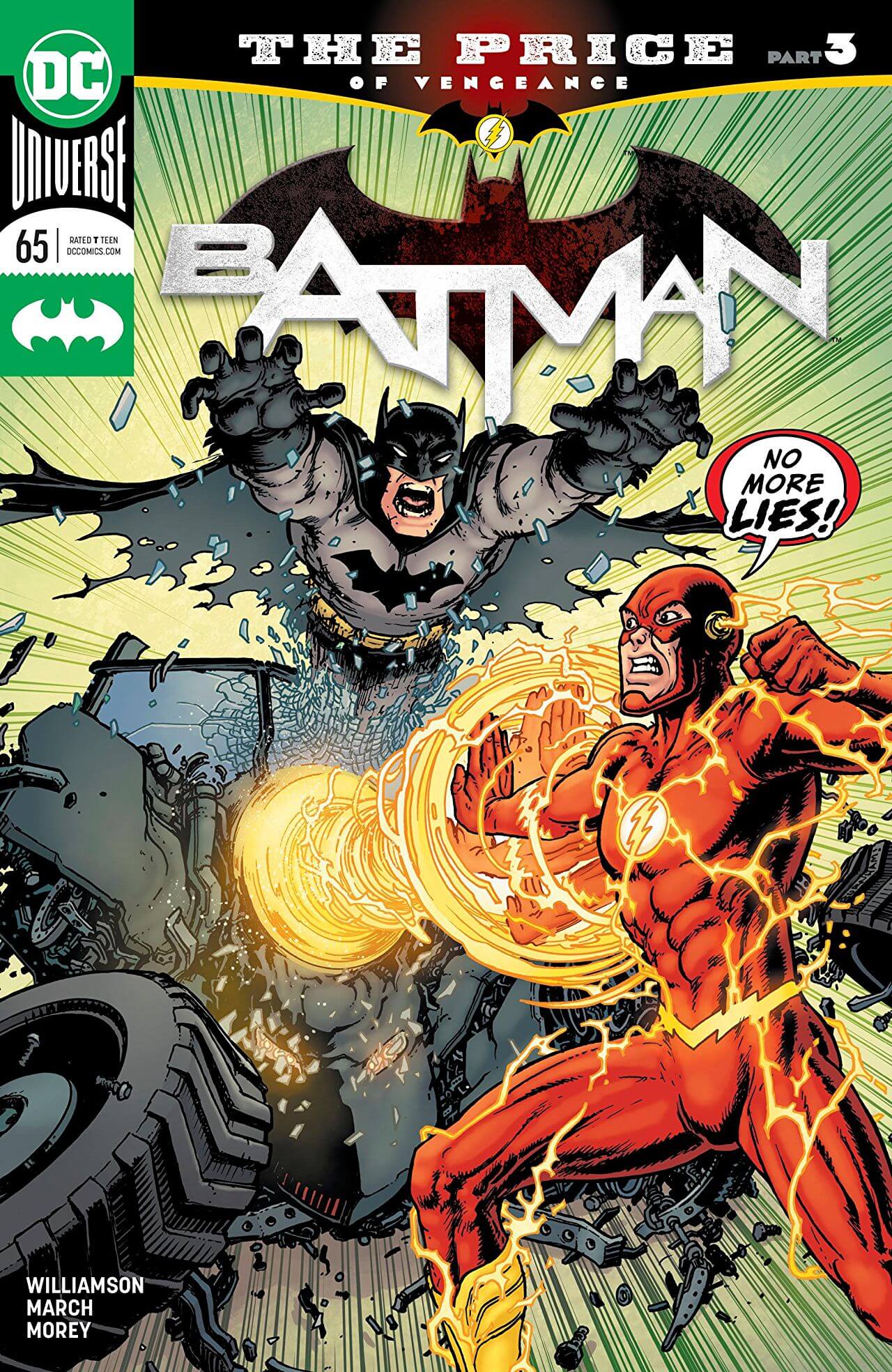 Gotham Girl’s insane plan continues in Batman #65 (written by Joshua Williamson and penciled by Guillem March). Batman struggles to get The Flash to work with him and form a plan, but shattered trust causes the Scarlet Speedster to impulsively go after Gotham Girl on his own. The reanimated corpse of her brother Gotham quickly burns out, causing a grief-stricken Gotham Girl to inject herself with a serum, powering her up for a final battle with Batman and The Flash! Let’s hope these two can put aside their differences long enough to win this one...

The Penguin has a job for Selina in Catwoman #8 (written by Joelle Jones and penciled by Fernando Blanco with Joelle Jones). Raina Creel and Penguin are both after the same mysterious artifact, and since Oswald has hired Selina to retrieve it, guess who gets it first? Whatever the object is, it seems to be tied to Mrs. Creel’s mysterious condition, but it doesn’t look like Selina will have a chance to learn more! When Catwoman gives the item to Penguin, he immediately turns on her. Poor Penguin, doesn’t he know that double-crossing Catwoman never goes well.

Ric Grayson ponders returning to the vigilante life in Nightwing #57 (written by Zack Kaplan and Scott Lobdell, penciled by Travis Moore). When Detective Sapienza asks Ric if he’ll continue to help his group of Nightwings if trouble arises in Bludhaven again, Grayson apprehensively accepts. It looks like Ric may be needed sooner than he thinks, because a woman calling herself the Joker’s Daughter has targeted Councilman Pollard, turning the politician into a human bomb! Could this be the return of the Teen Titan Duela Dent or someone new?

Secrets are revealed in Teen Titans #27 (written by Adam Glass and penciled by Bernard Chang). While the rest of the Teen Titans bond and get to know each other, Djinn makes a late-night visit to Robin who is still healing from his recent battle with the Red Hood. As Djinn heals Damian, she tells the Boy Wonder her secret history. Robin feels closer to her than ever and reveals his secret identity before going in for a kiss. Unfortunately, Robin’s romantic move is interrupted by the untimely arrival of Deathstroke! It looks like Slade is about to learn what happens when you get between a teenager and their first kiss!

The Legion of Doom has some unrest in their ranks in Justice League #18 (written by James Tynion IV and penciled by Pasqual Ferry). Brainiac attempts to trap Lex Luthor so he can take over his body, and by default the Legion of Doom. While he's in Luthor’s mind, Lex gives Brainiac a front row seat to his evil history and how he went up against Vandal Savage and his father Lionel. Hopefully these two villains will tear each other apart, saving the Justice League the work of having to do it themselves!

If you’re in the mood for some back issues, the entire "No Man’s Land" saga has just been added to our comics library! The storyline ran for a full year in all the Bat books, so you know it’ll be a nice cozy binge! "No Man’s Land" follows Batman and the citizens of Gotham after the government has shut the city down. The story partially inspired the 2012 film The Dark Knight Rises and is currently being adapted on Fox’s Gotham! If you’d rather read about the Gotham of the future, we’ve also added the first year of the 2016 Batman Beyond series, featuring the return of fan favorite Terry McGinnis! 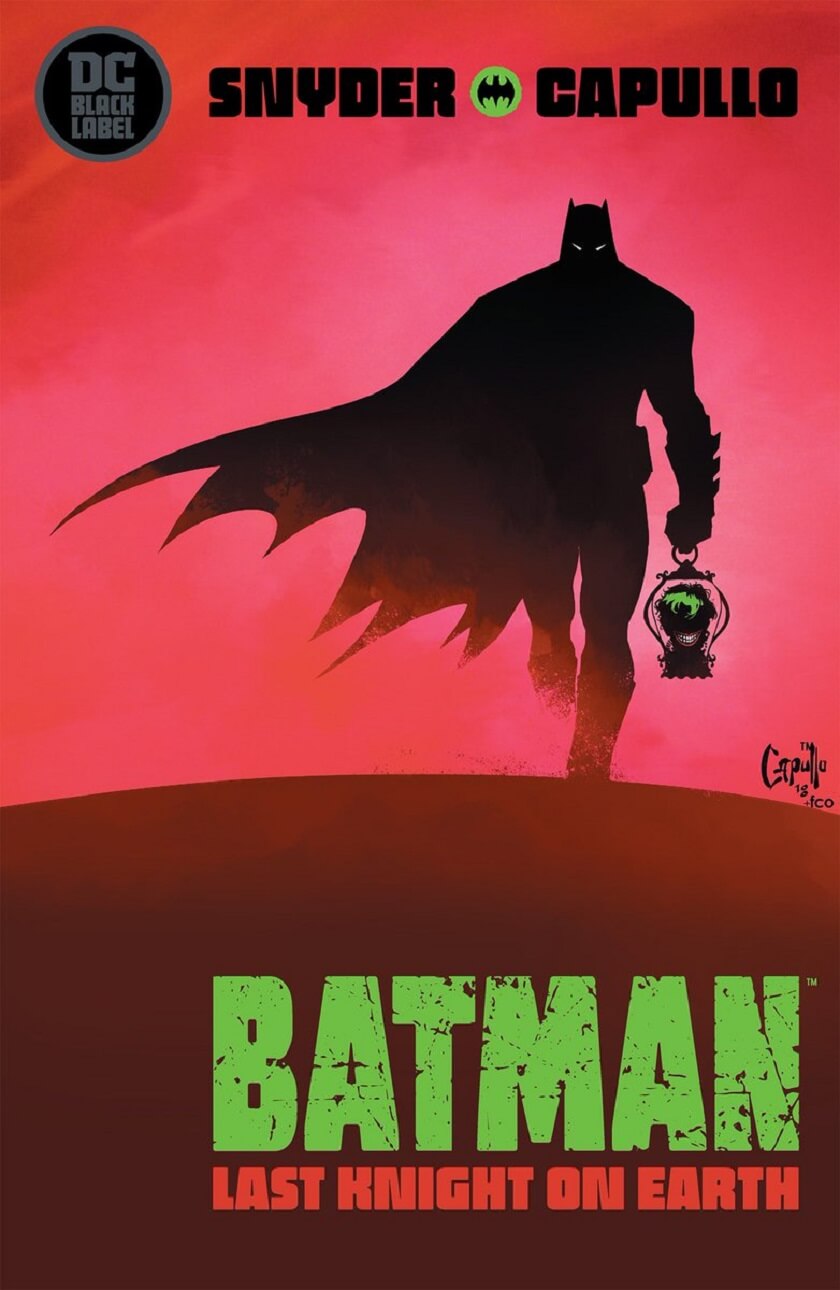 Scott Snyder and Greg Capullo, the team behind "Court of the Owls" and other classic Batman stories, are teaming up again to tell another epic Dark Knight tale. The story is called Batman: Last Knight on Earth and will be released via DC’s Black Label on May 29th. The teaser image, featuring the Dark Knight walking the Earth with a severed Joker head, is enough to get any Batfan curious about the title. 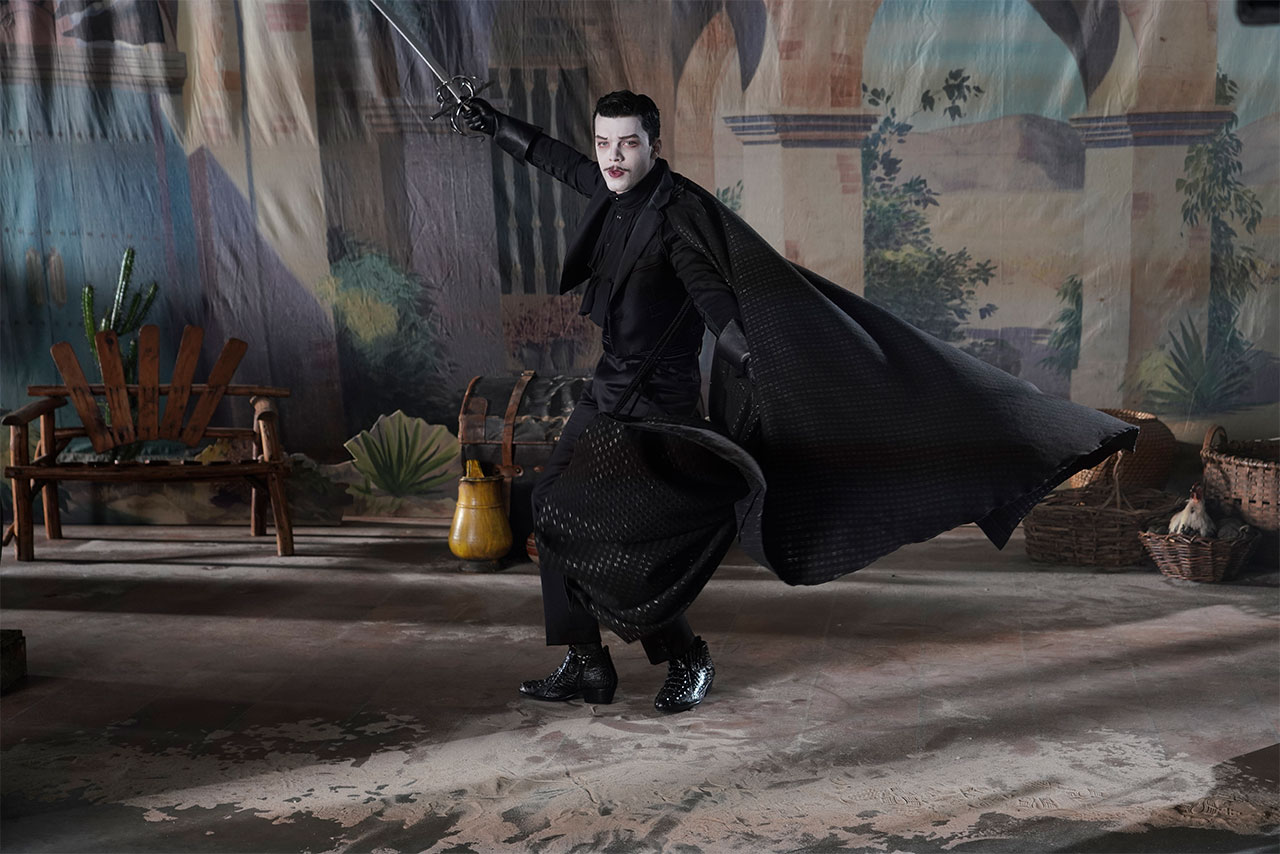 Things got super uncomfortable for Bruce Wayne in the Gotham episode “Ace Chemicals”. Jeremiah Valeska wanted to recreate the day that Bruce’s parents died, and with the Mad Hatter's help and two people surgically altered to look like Thomas and Martha Wayne, he did a pretty convincing job. During Bruce and Jeremiah’s epic showdown, the madman fell into a vat of acid at Ace Chemicals. If you’re familiar with Batman lore then I think we all know who is going to emerge from that vat...

The Batwoman TV pilot has found its Jacob Kane! Dougray Scott will be playing the former army colonel whose daughter secretly fights crime as Batwoman. Jacob Kane first appeared in the classic "Elegy" storyline, in which he served as mission control for Batwoman’s war on crime. The Batwoman pilot will begin filming in Vancouver this March so stay tuned for more news... 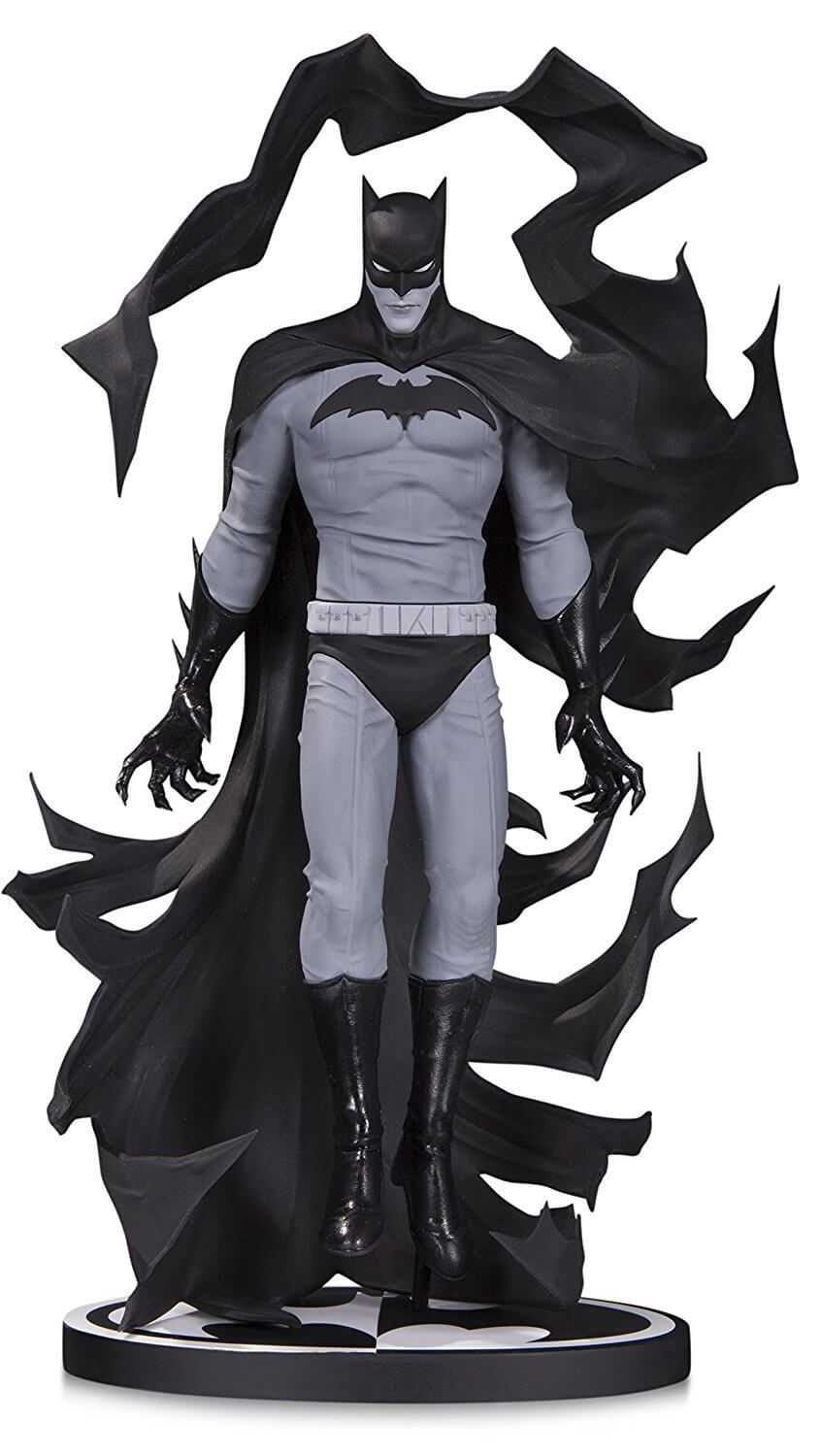 DC’s partnership with Walmart continues! After the success of the DC Comics 100-Page Giants, Walmart is adding collectibles to their inventory of DC products. Starting this month, DC Collectibles will be releasing four-inch versions of the statues from its Batman: Black and White line priced at $5 for Walmart stores. This means that you can be a statue collector without breaking the bank. So the next time you head to Walmart for some grocery shopping, go ahead and make that impulse buy. It’s never too late to start that statue collection!

NEXT WEEK: Scarface makes his debut on TV’s Gotham! The Dark Knight and the Scarlet Speedster take on Gotham Girl in The Flash #65! The Joker is out to kill another Robin in Batman Beyond #29! Barbara Gordon must protect Gotham’s Congressional race in Batgirl #32! Batman learns who has been targeting his allies in Detective Comics #999! And the truth about the Sanctuary continues to unravel in Heroes in Crisis #6! So be sure to check back here next week for our handy guide to all of this goodness. Same Bat-time, same Bat-channel!

What was your favorite Batman news this week? Let us know in our Community!