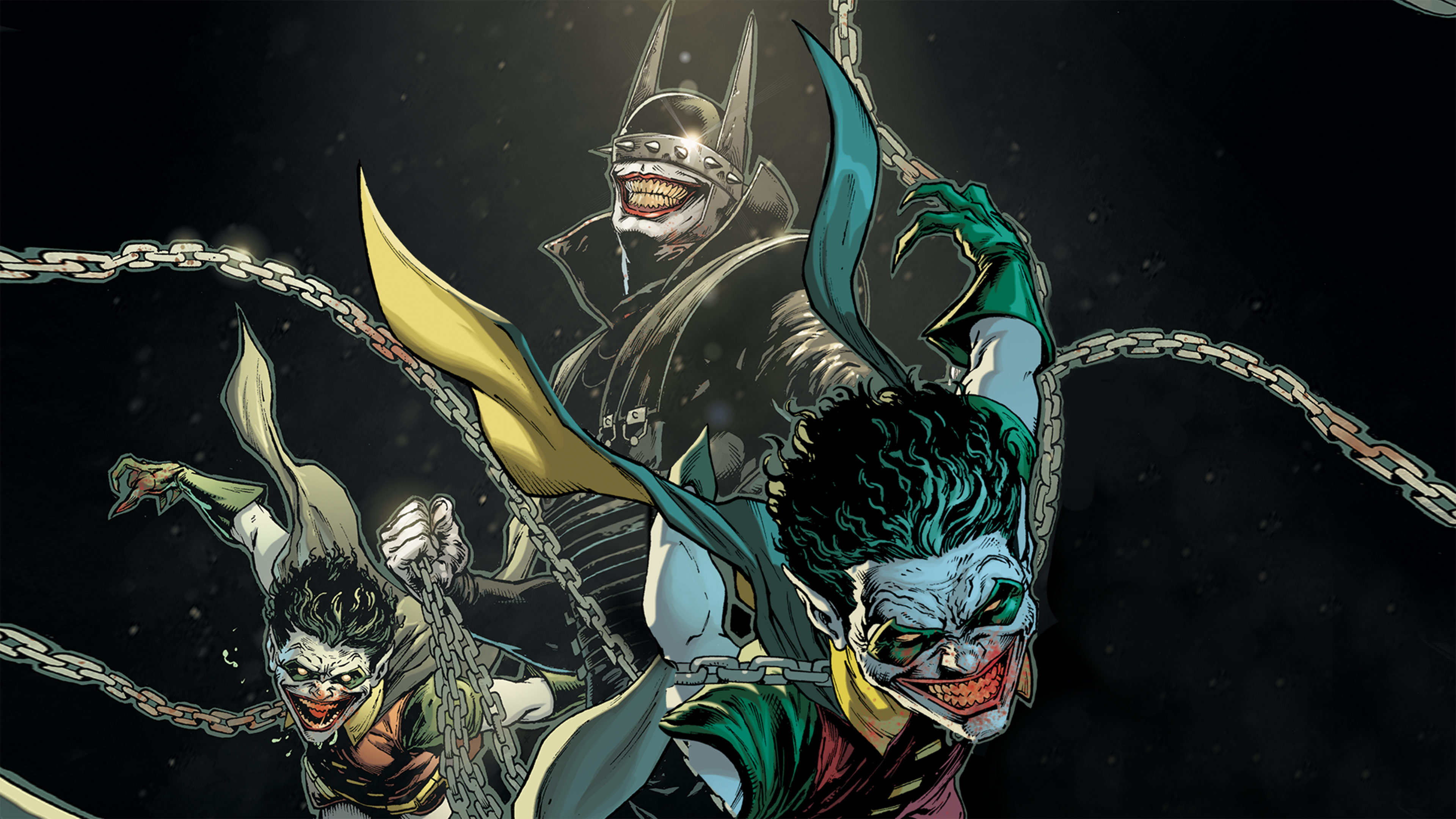 Bat Out of Hell: The 5 Scariest Versions of Batman

As Bruce Wayne realized, criminals are a superstitious and cowardly lot, which is why he chose to dress as a bat. As Batman, Bruce Wayne is downright creepy, but there are other versions of the Dark Knight who are even more terrifying than the version we know. Here are 5 versions of the Caped Crusader from the DC Multiverse who are more monster than man, both in appearance and actions. Trust us, you wouldn’t want to meet in a dark alley...or anywhere else, for that matter.

The Batman Who Laughs 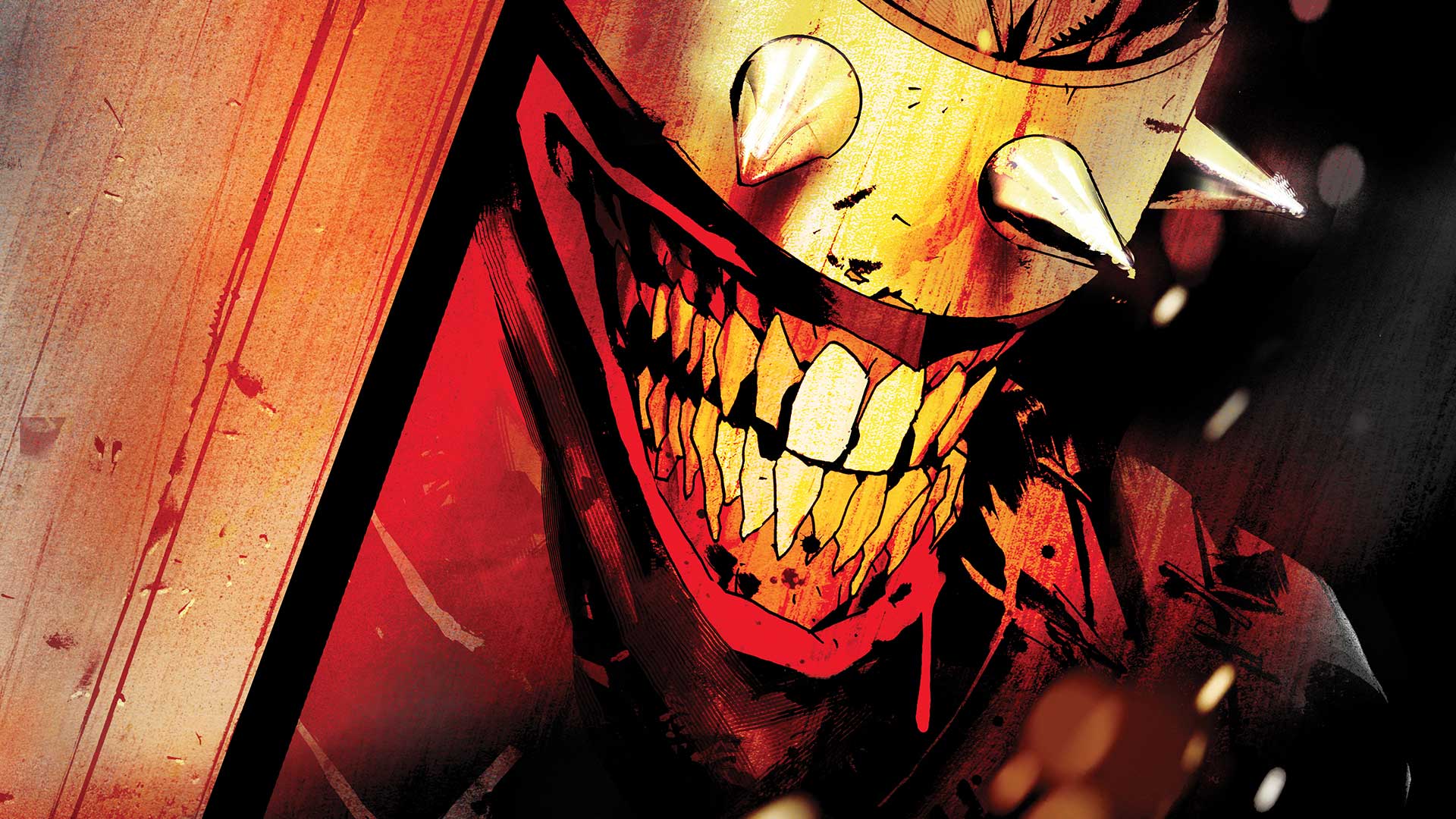 Why They’re Scary: The Batman Who Laughs is a version of Batman who snapped one day. He was tired of the Joker’s increasing body count, and killed the Clown Prince of Crime. Once the Joker died, a toxin was released that overtook Batman, warping his body and mind until he became a threat even worse than the Joker. He then turned his fury on the Justice League, then the world, and now he’s after the entire multiverse!  Imagine someone with the Joker’s murderous ways and Batman’s rigorous training. Pretty scary right?

Terrifying Moments: The Batman Who Laughs exposed the Superman Family to Black Kryptonite, which causes all Kryptonians to go on killing sprees. Using the Black Kryptonite, Batman forced Superman to kill Lois Lane, and Supergirl to murder her foster parents. What the heck Batman?! Somehow that’s even scarier than Batman doing the deed himself. 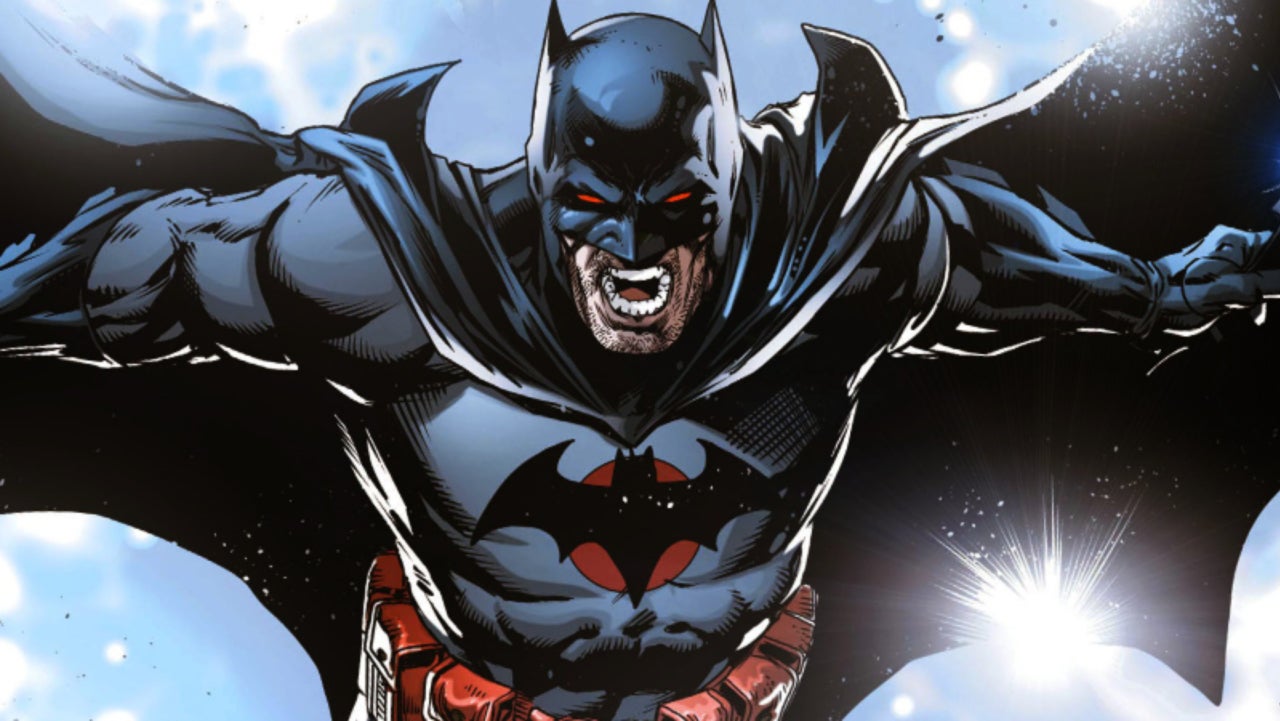 Why They’re Scary: In the Flashpoint timeline Bruce Wayne was killed instead of his parents. The sight of his young son being gunned down drove Thomas Wayne to become a lethal version of Batman. Thomas’s version of Batman isn’t afraid to use lethal weapons, throw people off of buildings and destroy innocent lives to meet his goals. His archenemy is his wife Martha, who survived the Crime Alley robbery and became the Flashpoint Joker.

Terrifying Moments: Wayne stalked Joe Chill with the intent of poisoning him, but his rage took over and he tore the man apart with his bare hands instead. We know Chill killed Thomas’s young son, but seeing him come unglued like that was still horrifying. 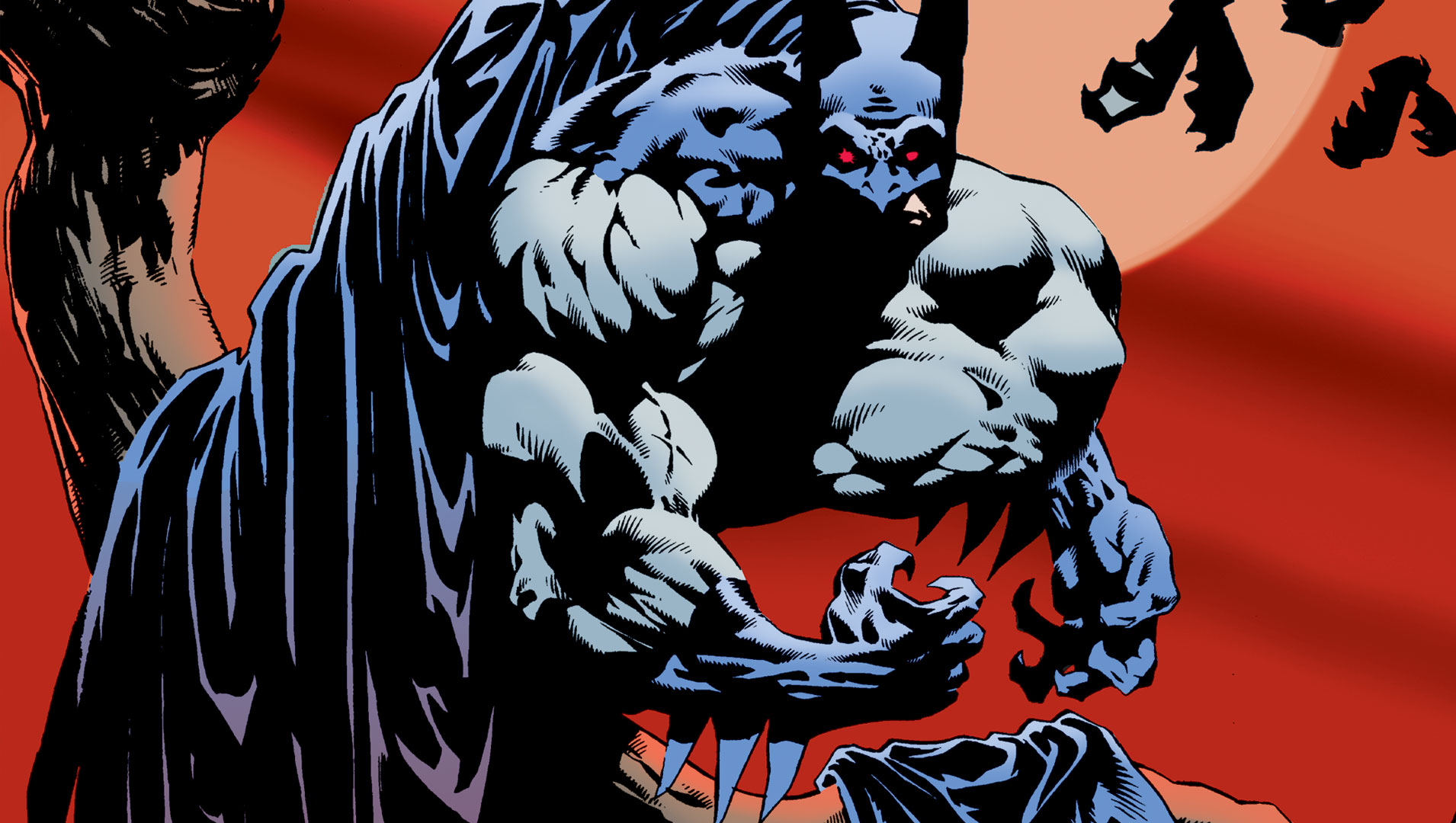 Why They’re Scary: An epic fight with Dracula leaves Batman depleted of all his blood. Although he was able to defeat the vampire, the victory cost Bruce Wayne his humanity, with only a vampire version of Batman remaining. If you thought Batman was scary before, imagine how terrifying he is when he drinks blood!

Terrifying Moments: Although Batman tried to control his bloodlust and only use his vampire powers for justice, the death of Selina Kyle caused him to lose control and make a quick meal out of the Joker. 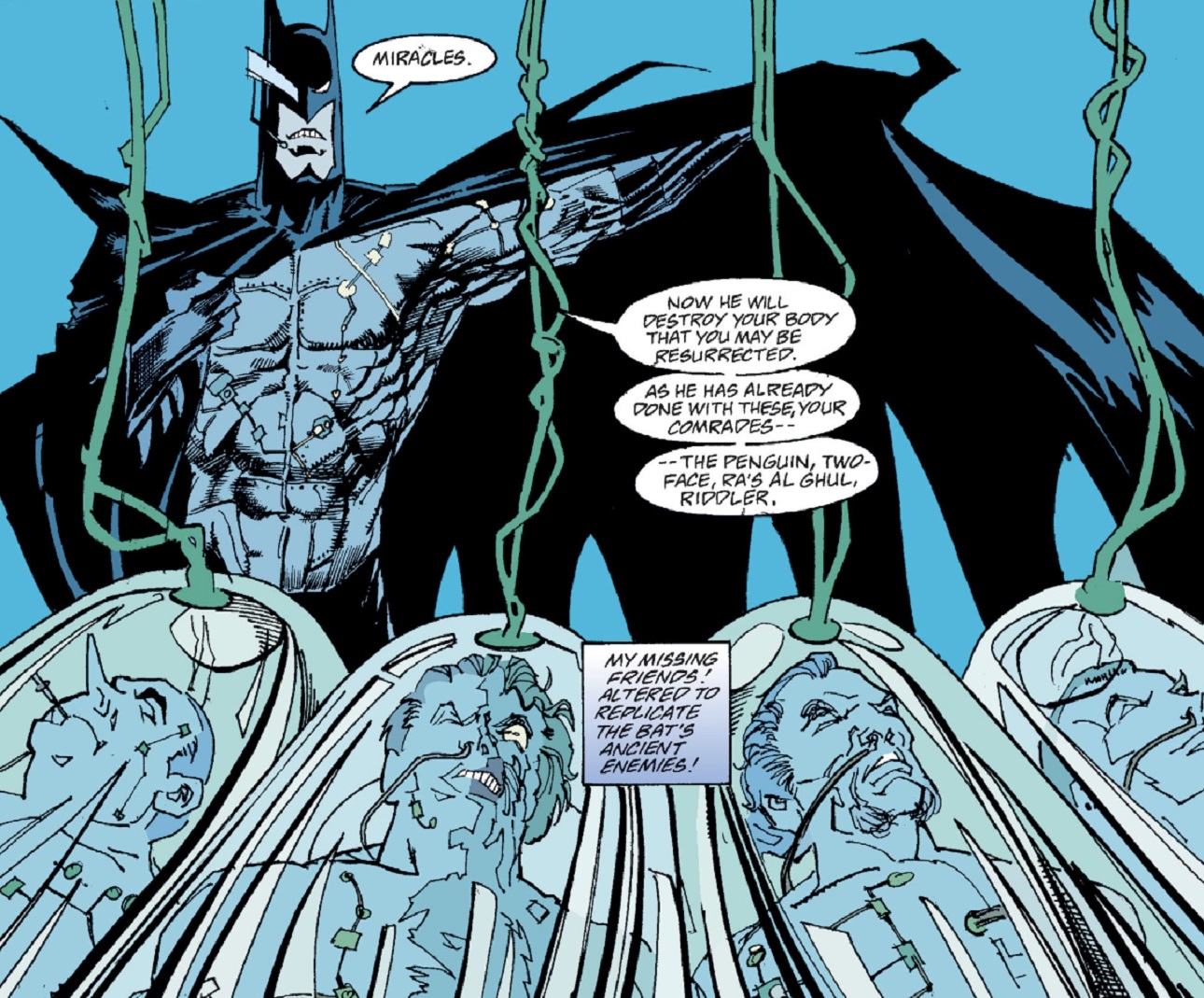 Why They’re Scary: This version of Batman is known as “The Bruce” and he’s extremely creepy, and also a bit fascist. He rules over Gotham like a tyrant, and lets the citizens challenge him to a physical dual once a year. He executes his enemies, and experiments on the ones he lets live. He’s twisted and makes Gotham a horrifying place to live. To make matters worse, he’s experimented with immortality, slowing down his aging, which means Gothamites will have to deal with his brutal reign for generations.

Terrifying Moments: The Bruce’s batarangs are not like normal batarangs. These batarangs BEHEAD PEOPLE! Poor Ra’s Al Ghul is executed with one of them to satisfy The Bruce’s bloodlust. Dang! What else does he have in that utility belt?!

Castle of the Bat

Why They’re Scary: This version of Batman is a twisted tribute to Mary Shelley’s Frankenstein. After the death of his parents, Bruce Wayne grew up to become a mad scientist. He experimented on his father’s preserved brain, and put it into a creature he built out of discarded body parts. He threw in some bat DNA for good measure, and Thomas Wayne was reborn as a monstrous version of Batman.

Terrifying Moments: As the story progresses Thomas Wayne’s bat DNA causes his appearance to change. He begins looking less like a reanimated man as his face mutates to look more like an actual bat-man!

What Bat is the scariest? Let us know in our Community!