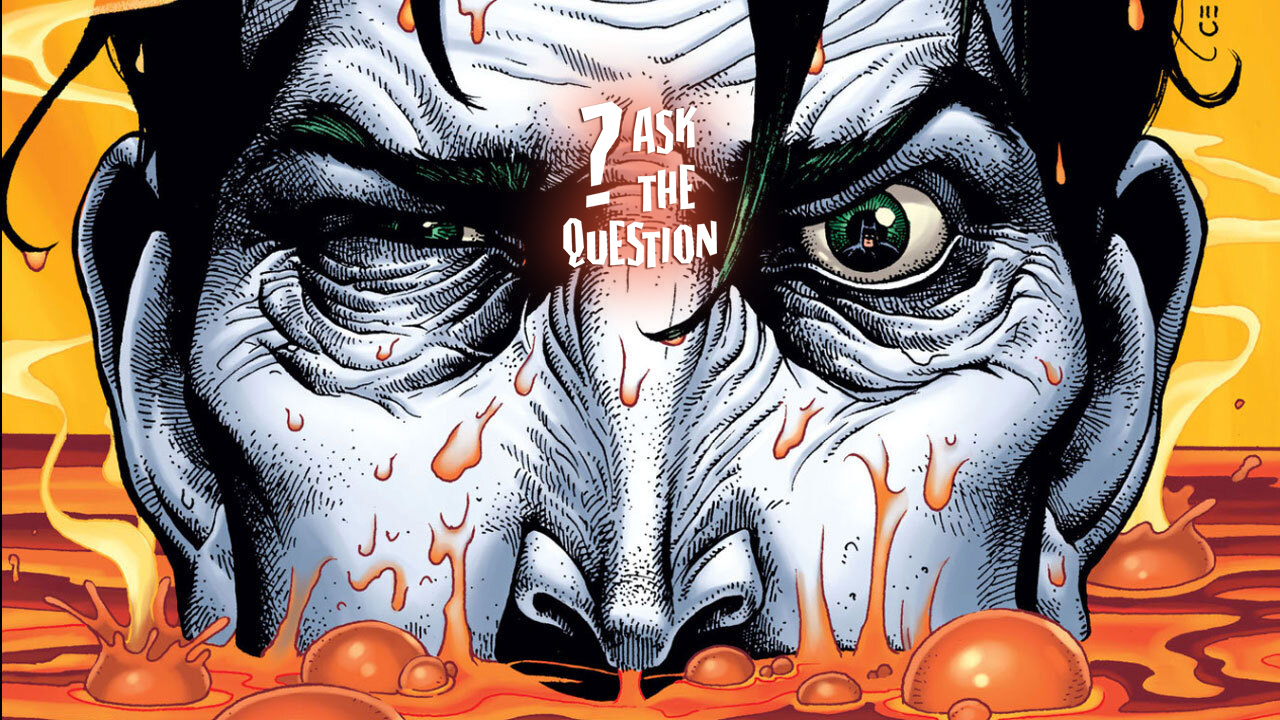 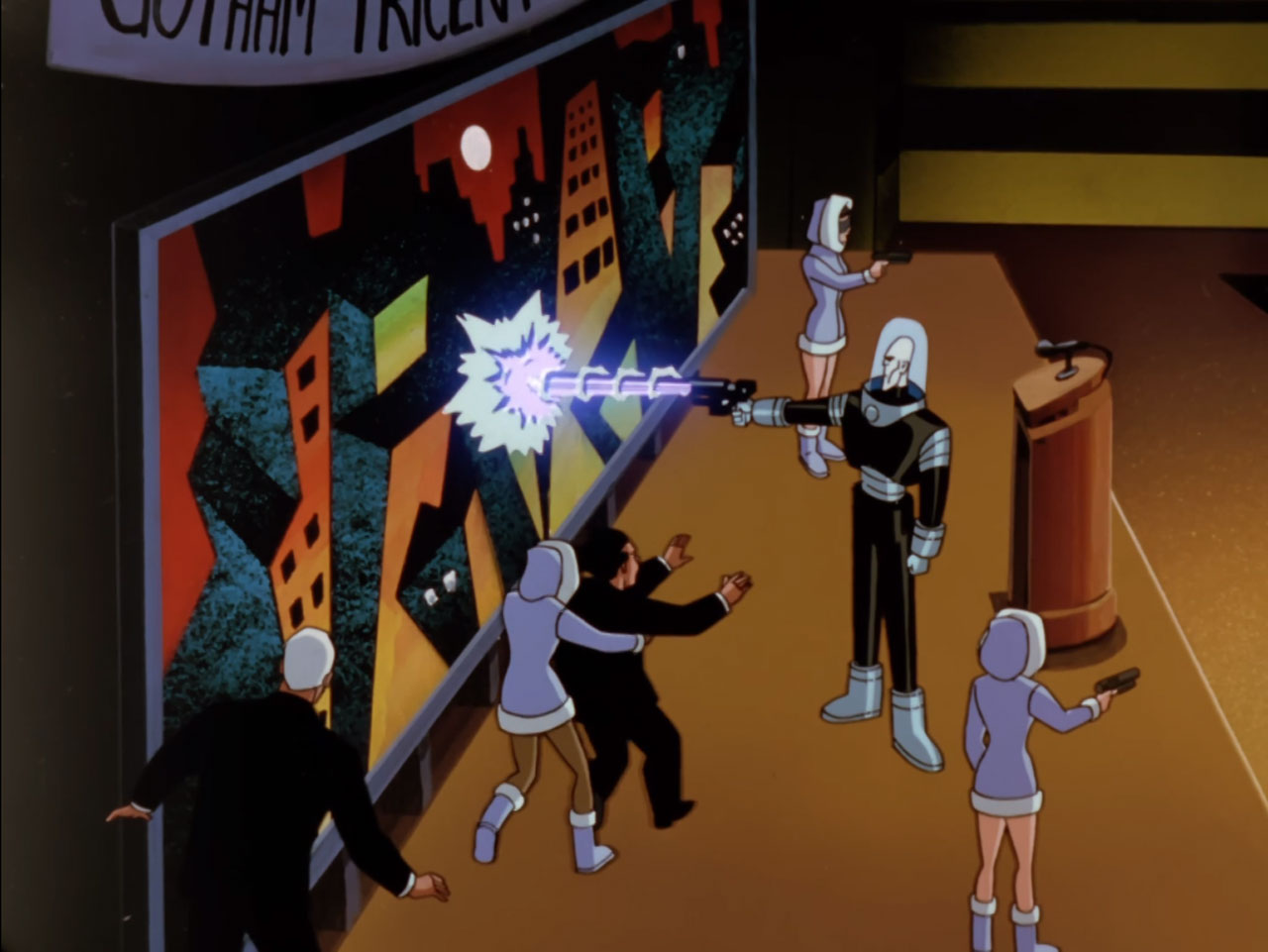 “Are the skies red in Gotham in Batman: The Animated Series as a reference to Crisis On Infinite Earths?” -Arblas.17246

This is actually one of the questions I’m most frequently asked. Is there any connection between the red skies which appear above the world before a crisis in the comics, and the crimson hues above Gotham’s skyline in this series? Until now, I’ve refrained on writing about it, because as far as I can tell no one involved with the show has ever explicitly *denied* this connection in a public forum. But having reviewed what evidence exists, I can say with some measure of confidence that the red skies of Gotham are a stylistic choice, as opposed to a referential one.

For starters, the skies in Gotham aren’t as red as you think. We associate the Gotham of BTAS with red skies because that’s how it appears in the classic 30-second intro before every episode. But once you get into the show itself, the night is typically as dark as we might expect anywhere else. The angular silhouettes and dynamic action of that intro are all built to play into what truly inspired the series: the primary-colored Superman shorts by Fleischer Studios in the 1940s.

Red skies don’t actually start appearing with frequency in the show itself until late in its run, when it becomes The New Batman Adventures. This discrepancy is actually explained in the episode “Cold Comfort”, with the unveiling of a red skied mural commissioned by City Hall entitled “Twilight in Gotham” -- suggesting that the red skies we’re seeing aren’t true night, but the twilight hour. At this liminal time between day and night in major urban areas, big city skylines are often tinted with hues of red and orange as the sun sets due to lingering air pollution. Besides: when the skies turn red in the comics, people usually have something to say about it being the end of the world. In Bruce Timm’s Gotham City, a red sky is just business as usual. 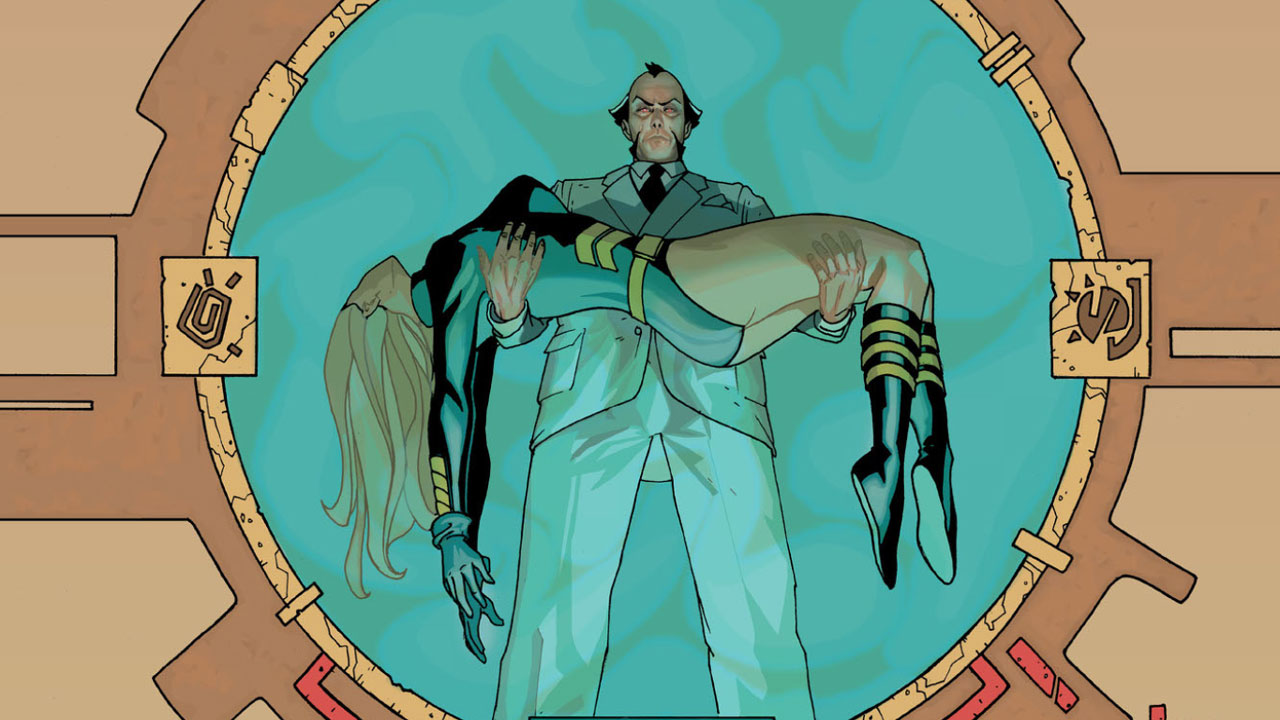 “Hi, I was wondering which characters have been in the Lazarus Pits besides Ra’s?

I know Jason Todd and Cassandra Cain have been in but who else?? (and did Ra’s ever put someone besides himself in??)” -Squintyfist

Over the years, quite a number of characters have taken their turn in Ra’s al Ghul’s oozy jacuzzi. Most of these incidents occurred without his permission, but there are a few exceptions. In 2017’s BATMAN #35, Talia, the Demon’s Daughter, confides in Catwoman that she herself was resurrected in the pits many times as Ra’s trained her in the ways of the League of Assassins. Earlier, in 2001’s BIRDS OF PREY #34, Ra’s decides to use the Lazarus Pit on Black Canary, determined to use her extended life span to get her to love him and take her for a bride. Though she never does, the dip does restore Dinah’s long lost Canary Cry. And on one charitable occasion in 1995, Ra’s allowed Azrael’s close friend Brian Bryan a dip, curing his debilitating alcoholism. And most recently, Ra’s al Ghul used the pits to resurrect Lady Shiva, after mercilessly gunning her down in 2017’s DETECTIVE COMICS #956.

Apart from that, the vast majority of Lazarus Pit activity took place between 2001 and 2010. I won’t go over every incident in detail, but here’s a list for you with some sources to read.

Dunked in the pit by Batman himself, if you can believe it. Bruce needed to save him so that Joker could help him stop a plot by Ra’s al Ghul. Rather than inducing madness, the pit temporarily restored his sanity.

Father of Bane and sometimes associate of Kobra, King Snake has access to Kobra’s own proprietary Lazarus Pits used to brainwash and immortalize his own followers.

Bruce cracks the mystery of Hush open when he discovers that Riddler had contracted a fatal tumor, and availed himself of a Lazarus Pit to cure his cancer.

In this limited series, Ra’s al Ghul’s neglected daughter Nyssa discovers a way to make the notoriously fickle Lazarus Pit’s effectiveness last indefinitely, and exploits this knowledge for her own benefit.

Both Raven and Jericho are resurrected in Geoff Johns’ tenure on TEEN TITANS through mystical pools used by Brother Blood. The relationship, if any, between these pools and Ra’s al Ghul’s pits is left ambiguous.

During a brief episode where Batman and Bane are led to believe that they may actually be brothers, Bruce saves Bane’s life Lazarus style.

Mr. Freeze falls into Nyssa al Ghul’s service after she offers to use the pit on his long dying wife. Unfortunately, the pit exposure drives her mad, recreating her as the villain “Lazara.”

This limited series chronicles Black Adam’s quest to regain his power and resurrect his lost wife, Isis. One method Adam attempts is the Lazarus Pit, but Adrianna’s body is too far gone for it to be successful.

At the climax of this essential storyline, Batman and Sensei fall into the pit together. Sensei, unprepared for the exposure, dies instantly, while Batman emerges healthier and more vital than ever before.

In this one-shot, Kobra returns from the dead through the same method as his many followers.

Dick Grayson and Damian Wayne discover through the use of the Lazarus Pit that the corpse of Batman recovered from FINAL CRISIS was in fact a genetic clone, and not Bruce himself. The pit is instead used to revive a critically injured Kate Kane.

“I have a question that has been nagging at me for some time…whatever happened to the Trinity of Sin and that version of The Question? They randomly killed Pandora at the launch of the Rebirth storyline for some reason, but I haven’t heard much from the Phantom Stranger or The Question. Am I missing something really obvious or did those characters get dropped?” -Masterchief7390

You’re not missing anything at all. The Trinity of Sin, first fully introduced in 2012’s FREE COMIC BOOK DAY SPECIAL, was a mystic mystery concocted by writers Geoff Johns and J.M. DeMatteis meant to run throughout the New 52 line of comics. Pandora herself was drawn into the background of every first tissue of the line-wide relaunch, suggesting a critical role in an all-encompassing story from the very beginning. As we know them, Phantom Stranger, Pandora, and this new nameless take on The Question were deemed the “Trinity of Sin” by the council of wizards who sat ages ago upon the Rock of Eternity, the last of whom would later give Billy Batson the power of Shazam -- the greatest criminals in the history of the universe, who would suffer forever for their crimes. Phantom Stranger’s crime was revealed in writer Dan DiDio’s PHANTOM STRANGER series to be the betrayal of Jesus Christ, having been the disciple Judas in life. Pandora’s was, as in Greek myth, opening the box which unleashed all sin upon the world. The Question’s crime, however, was said to be the worst of all. As punishment, he was robbed of his name and face. But the nature of that crime was never revealed.

In 2014, a TRINITY OF SIN series was launched to tie up loose ends on this mostly abandoned storyline, but even that was canceled before it could reach resolution. The Question even laments in the final issue about how they never even got to address his whole deal. This version of The Question ultimately burdens himself with the sins of Phantom Stranger and Pandora for what we can only assume is eternal damnation, absolving them of their pasts.

The advent of DC UNIVERSE: REBIRTH, as you noted, includes a scene where Doctor Manhattan kills Pandora. Or rather, perhaps erases her so that she never existed to begin with. This was no “random” occurrence, but a symbolic ending of the New 52 era, which Pandora herself had embodied from the very beginning. Since then, more traditional incarnations of The Question and Phantom Stranger alike have appeared throughout the DC Universe. With Doctor Manhattan’s erasure of Pandora, the Trinity is no more -- and for that matter, they never have been. Aren’t retcons fun? 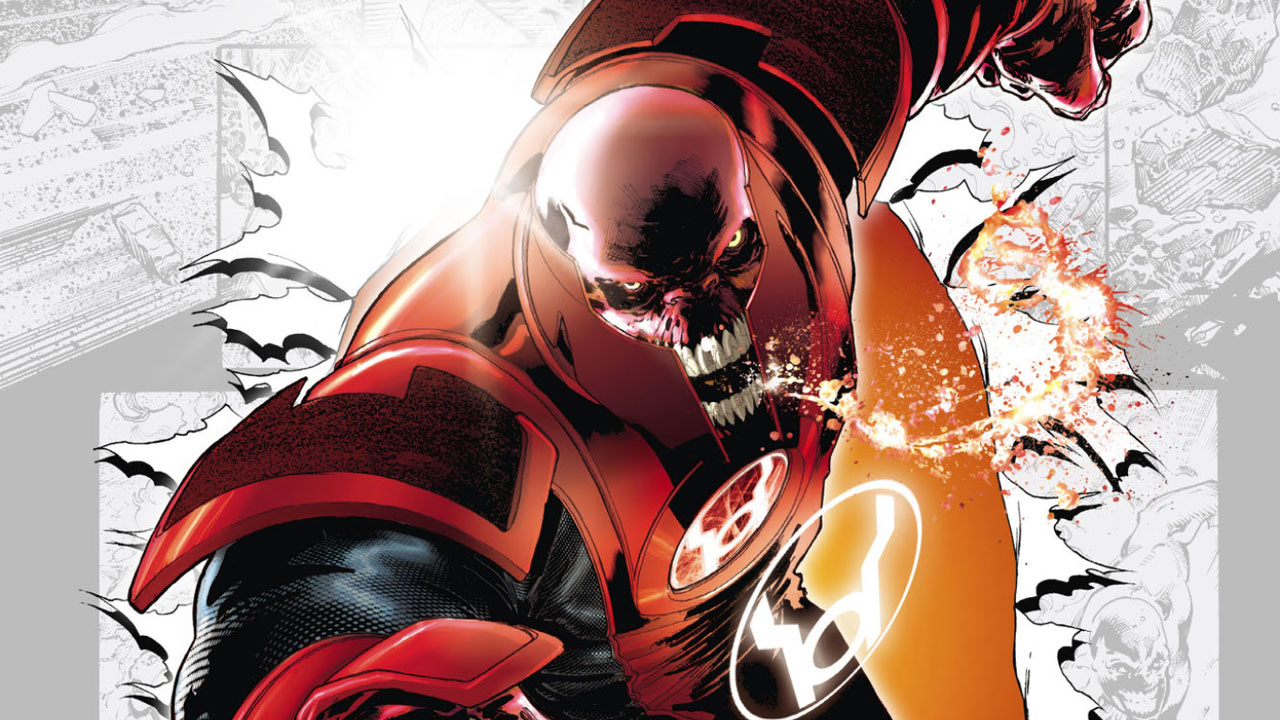 “If the Manhunters pre-date the GL Corps, how old is Atrocitus? I’ve looked everywhere. From what I can tell the GLC is pretty old, but still a relatively new concept for the universe. They at least had to exist before Alan Scott’s time right? So that would make both Atrocitus and the Manhunters about 60+. I couldn’t find a definitive answer, so I am hoping the Lord and Master of DC trivia knows.” -Behemoth

Very, very old. We aren’t privy to much about the early life of Atros, the Ryutan who would become leader of the anti-Guardian terrorist cell known as the Five Inversions, and later the Red Lantern Corps leader Atrocitus. But what we do know is this: Atros was one of five survivors of the Manhunter attacks which razed all life in Sector 666, the incident which would lead the Guardians of the Universe to decommission the Manhunters and replace them with the Green Lantern Corps. The accounts I’ve seen of the corps’ history place the organization at three billion years old… which would make Atrocitus at least three billion years old himself. He’s spent most of that time, until recently, imprisoned by the Guardians on the planet Ysmault. And you thought Vandal Savage had been around the block.

That’s going to do it for this edition of our little column, but I’ll be dispensing pearls of wisdom all week long at my home base in our Community. Whether you have a quick one or a case requiring a full-blown dissertation, I’ll put each of them to the test. It all begins when you ASK… THE QUESTION.