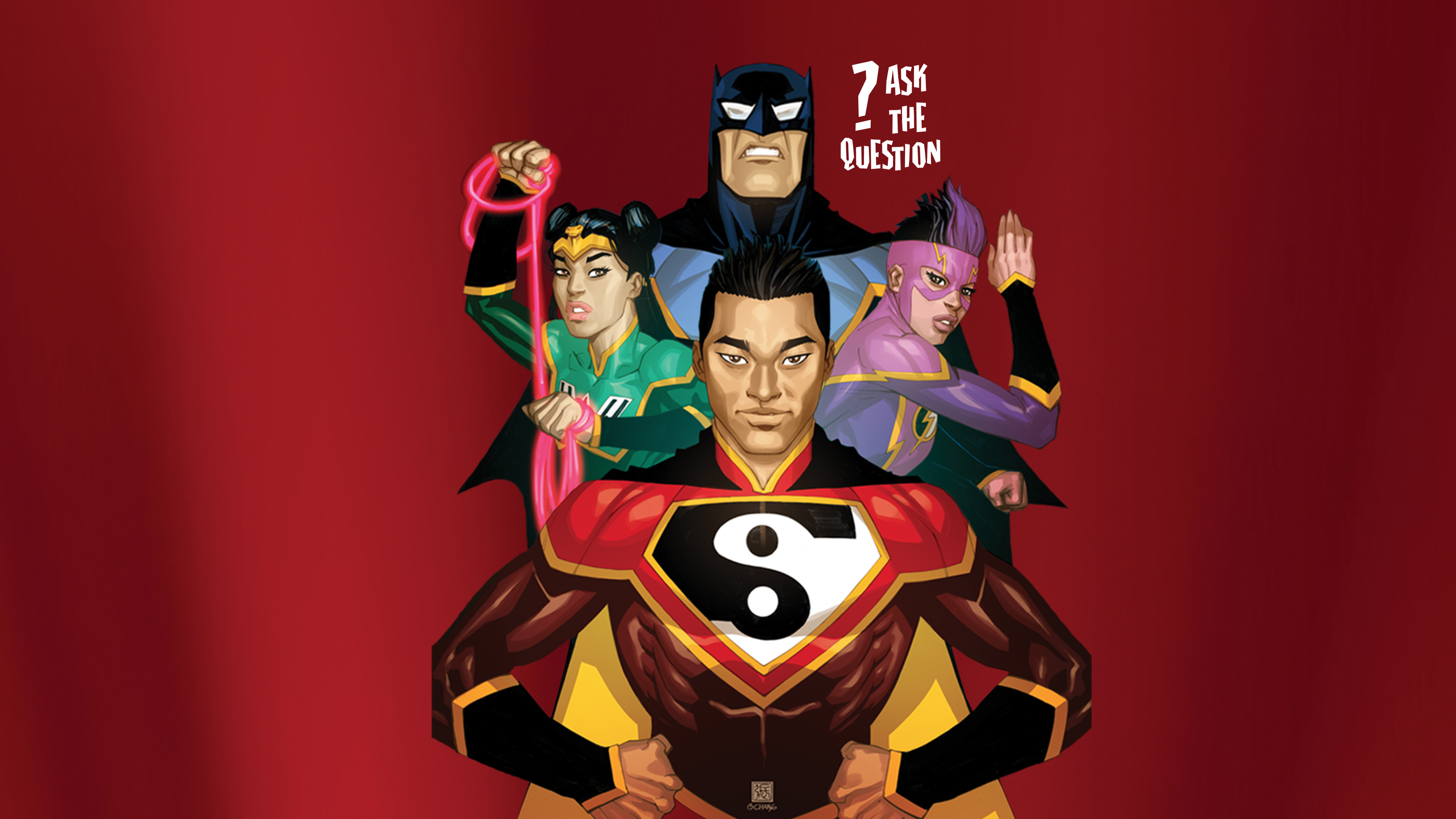 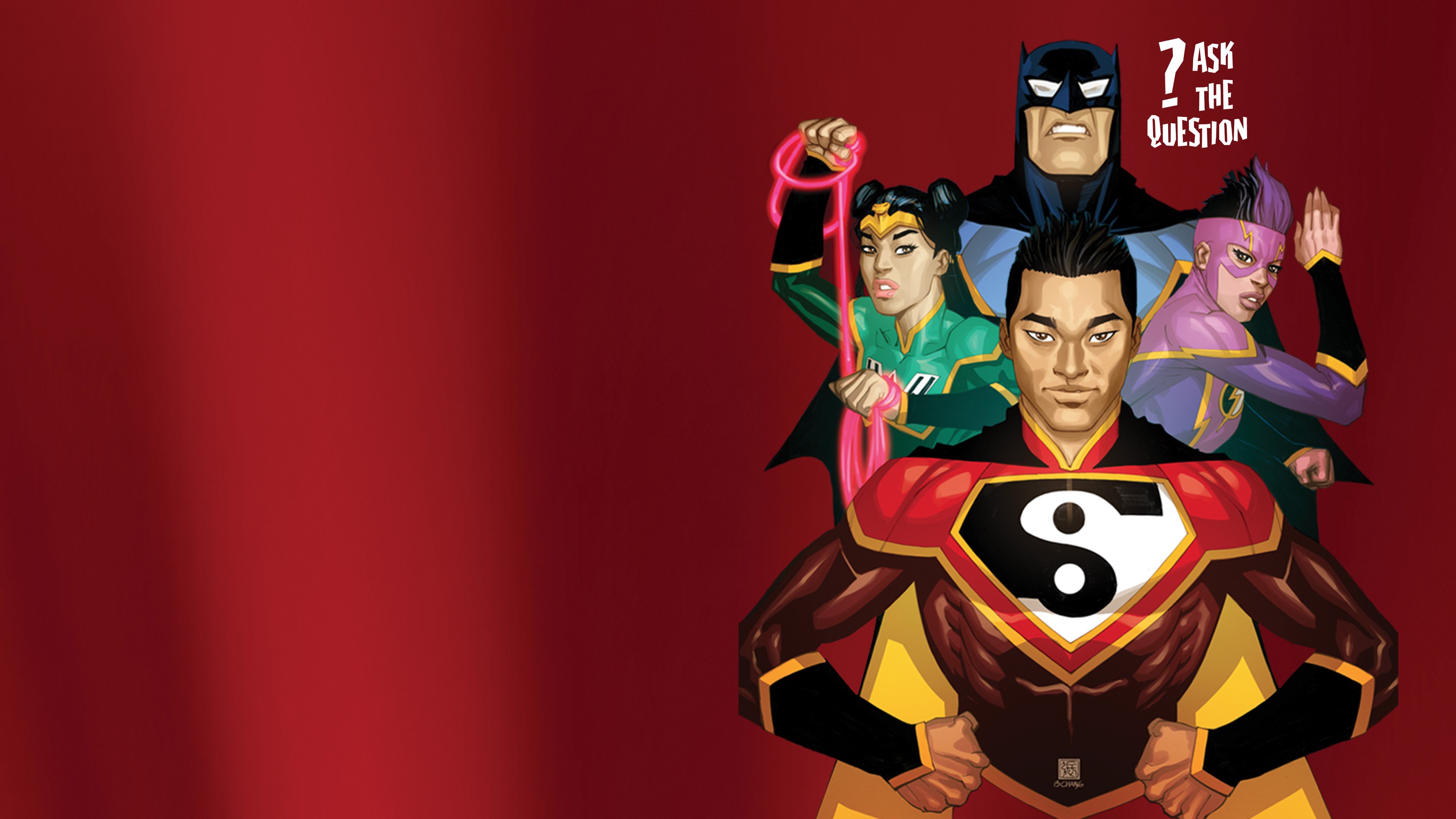 Ask...The Question: Where in the World Is the Justice League of China?

Hello, I’m Alex Jaffe. Some of you in our Community already know me as @HubCityQuestion, the man with the mission to take on any question you have about the DC Universe, no matter how granular, obscure, or strange, and present you with an answer. At any time, you may present your inquiries by posing them to me in this thread on the boards. And every week, I will be here to address the most intriguing of these cases to the best of my ability. All YOU need to do... is ask The Question.

Let’s see what’s arrived on our desk this week, shall we? 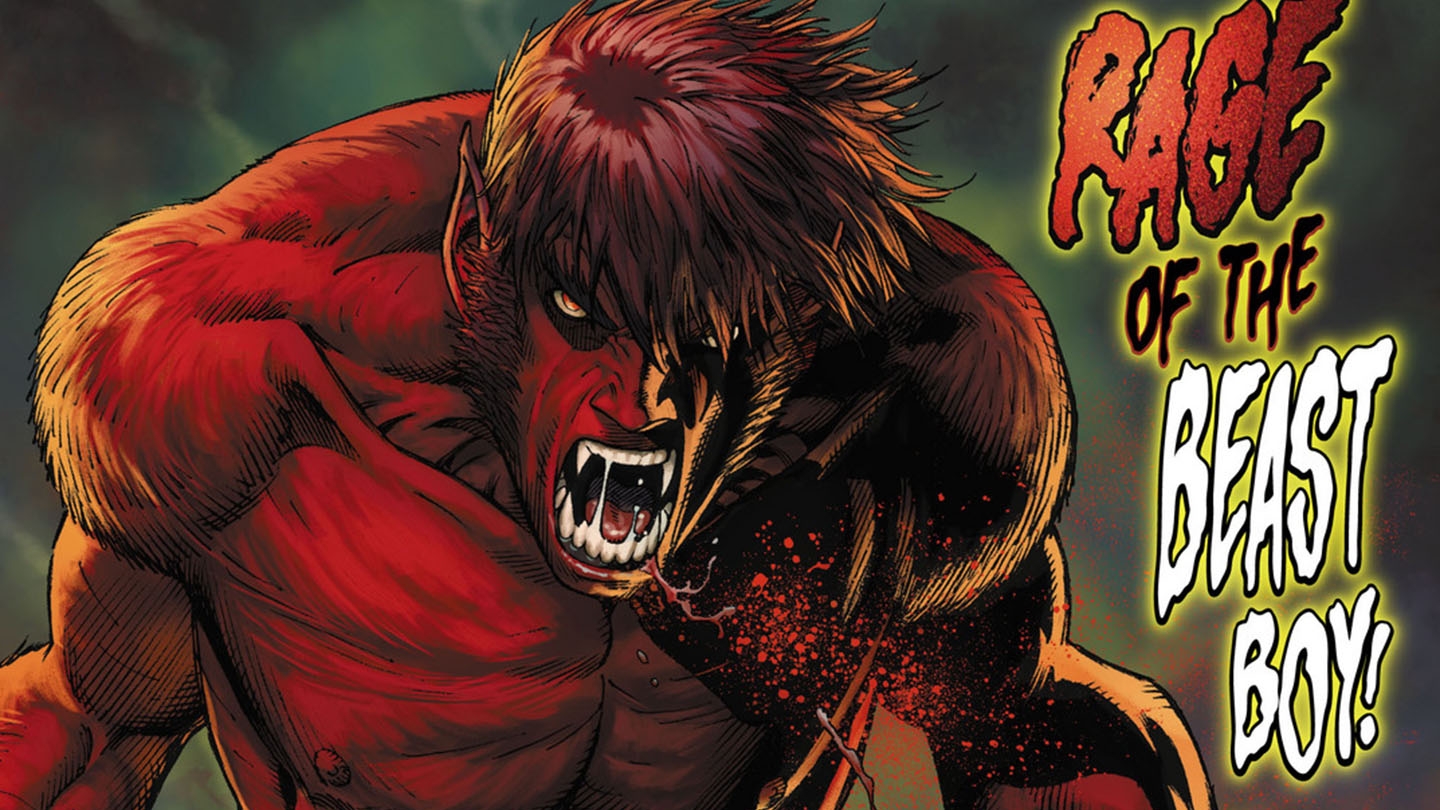 “1. When and why did Beast Boy turn from green to red and then back again?

2. Whatever happened to Skitter in the New 52 run of Teen Titans? She just up and disappeared.

3. Are the DCU and the Vertigo universe and for that matter the Young Animal universe connected?”

Three excellent questions. Allow me to take them in turn.

1. Beast Boy debuted with a new red coating when DC relaunched its titles in 2011’s New 52 initiative, as a member of The Ravagers. At the time, writer Howard Mackie explained the decision to change Beast Boy’s skin color in order to visually tie him into the source of his power more directly. It was decided early on that plant-based heroes would be color coded for their connection to The Green, an elemental force that ties all plant life together, and animal-based heroes would be color coded for their connection to The Red, a similar force that ties together all animal life forms. While this does follow a certain consistent logic, many readers missed the green-skinned Beast Boy they grew up with. When DC relaunched Teen Titans in 2014, Beast Boy returned as a member of the core team, colored green once again. No one commented on this change in canon, and as far as I know it hasn’t been referred to since. Maybe he was green before we first met him in the New 52, and the experiments performed by the Colony to turn him red just wore off. But I’d chalk this one up to a good old-fashioned retcon.

2. Skitter, sadly, is the subject of a seven-year-old storyline that remains unfinished. During 2012’s "The Culling" crossover event, Skitter is left behind when Harvest transports the rest of the Teen Titans to the Crucible. Now alone, Skitter is approached by a stranger with similar powers who calls her “sister,” whom she follows to parts unknown. But if you fear for Skitter’s safety, worry not. Skitter appears unharmed for the grand finale of Scott Lobdell’s first Teen Titans run in Teen Titans Annual #3, joining one last battle against Harvest. Later, Skitter appears among the many heroines who answer the call to defeat Obscura in Batgirl #34, the finale of Gail Simone’s New 52 run.

3. While most Vertigo titles exist independently from the DC Universe, this has not always been the case. When the Vertigo line first launched in 1993, many of the titles folded into it shared a connection with DC continuity: Swamp Thing and Doom Patrol, both of which can currently be found on DC Universe, stand out as examples. Others include Animal Man, Black Orchid, The Sandman, Hellblazer, The Books of Magic, Sandman Mystery Theatre, and Shade, The Changing Man. But after these early Vertigo titles, most books under the brand would exist independently from the DC Universe — and even the ongoing ones, like Hellblazer and Swamp Thing, would minimize (if not outright eliminate) all references to continuity in the other line. Occasionally, Vertigo would even present its own independent takes on characters like the Creeper, Deadman, and Sgt. Rock, but which existed outside of DC continuity. This would change in 2010, when DC surprised readers by welcoming Swamp Thing and Constantine back into the fold at the climax of Brightest Day. A year later, the New 52 initiative formally adopted a significant portion of Vertigo in books like Swamp Thing and Justice League Dark, the latter of which initially included Vertigo mainstays John Constantine, Rac Shade, and Madame Xanadu in its lineup.

Today, most Vertigo titles continue to operate independently from the DC Universe, with four loose exceptions: the 2018 relaunches of The Dreaming, Books of Magic, House of Whispers, and Lucifer all tie into Vertigo’s original The Sandman series, which itself remains half-connected to the DC Universe — a connection reaffirmed in the pages of Dark Nights: Metal. As for Young Animal, while connections to the DC Universe don’t come often, they are present. For instance, Wild Dog of Cave Carson Has a Cybernetic Eye is referred to occasionally through Green Arrow; and writer Steve Orlando’s Justice League of America teams up with the heroes of Young Animal in the Milk Wars crossover of 2018. 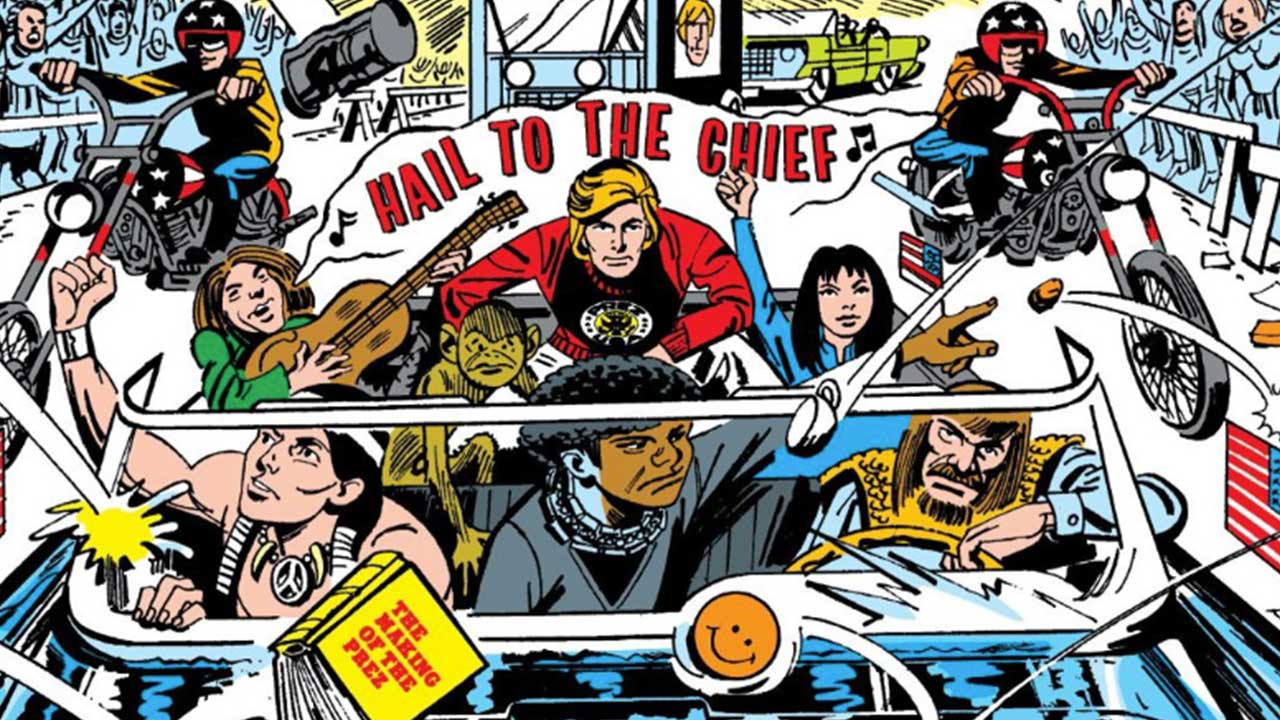 “What fictional Presidents have there been in the various DC timelines?”

The first fictional president in DC publication history was Prez Rickard, protagonist of the short-lived Prez series of 1973. At the time, he would have fallen somewhere between Richard Nixon and Gerald Ford. Though this series mainly existed in its own independent continuity, it is included as part of the DC Universe when Supergirl saves Prez from assassination in Supergirl #10

During the Clinton administration, a scientist named Julian September briefly manipulates the timeline to make himself President of the United States, but whose temporal machinations are ultimately unraveled by the JLA. Then in 2000 comes the infamous "President Lex" storyline. While George W. Bush served his first term in our own timeline, Luthor’s presidency in the DC Universe lasted for a single real-world term, at which point he could no longer contain his super-villain streak and found himself impeached. After Luthor’s impeachment, Superman’s childhood friend and Luthor’s VP Pete Ross ascends to the presidency, but soon resigns himself, ceding the presidency to a politician by the name of Jonathan Horne. Horne holds the office from 2004-2008 — apart from an incident in 2006, when an unrelated President is replaced by Gonzo the Mechanical Bastard, an agent of the Anti-Life Equation. After that, the office is assumed by the newly elected Democrat Martin Suarez, a candidate controversially endorsed by Batman in DC Universe: Decisions.

Without explanation, DC Comics began to depict Barack Obama as POTUS a few months before the New 52 relaunch. And when the relaunch occurred, the Luthor through Suarez presidencies were erased from the timeline, replaced by George W. Bush. Once again, all the real world presidents were accounted for… although recent issues of Brian Michael Bendis’s Action Comics have made some allusions to Luthor’s presidential past. There is one more fictional president who remains firmly in place, for now: one in the DC Universe’s future. In 2015’s DCYOU book launch, Mark Russell and Ben Caldwell brought us a reboot of Prez, featuring Beth Ross as America’s first adolescent Commander-in-Chief. Prez Rickard, from the original series, appears as her advisor.

Throughout DC’s vast multiverse, many other characters have assumed the office as well. Hal Jordan and Barbara Gordon both become President in Superman/Batman: Generations. Amanda Waller holds the office in Justice League: Gods & Monsters. Kalel, Superman’s Earth-23 counterpart, is President in the America of his universe. The Penguin appears as President in the altered timeline of Batman (2016-)’s “The Gift.” Starro the Conquerer in Old Lady Harley. Slade Wilson on the mirror world of Justice League: Crisis on Two Earths. Jefferson Pierce, aka Black Lightning, in the Injustice timeline. Even Elvis Presley gets a turn as President in Elseworld's Finest: Supergirl & Batgirl. Suffice it to say that in an infinite number of timelines, there can be an infinite number of Presidents. 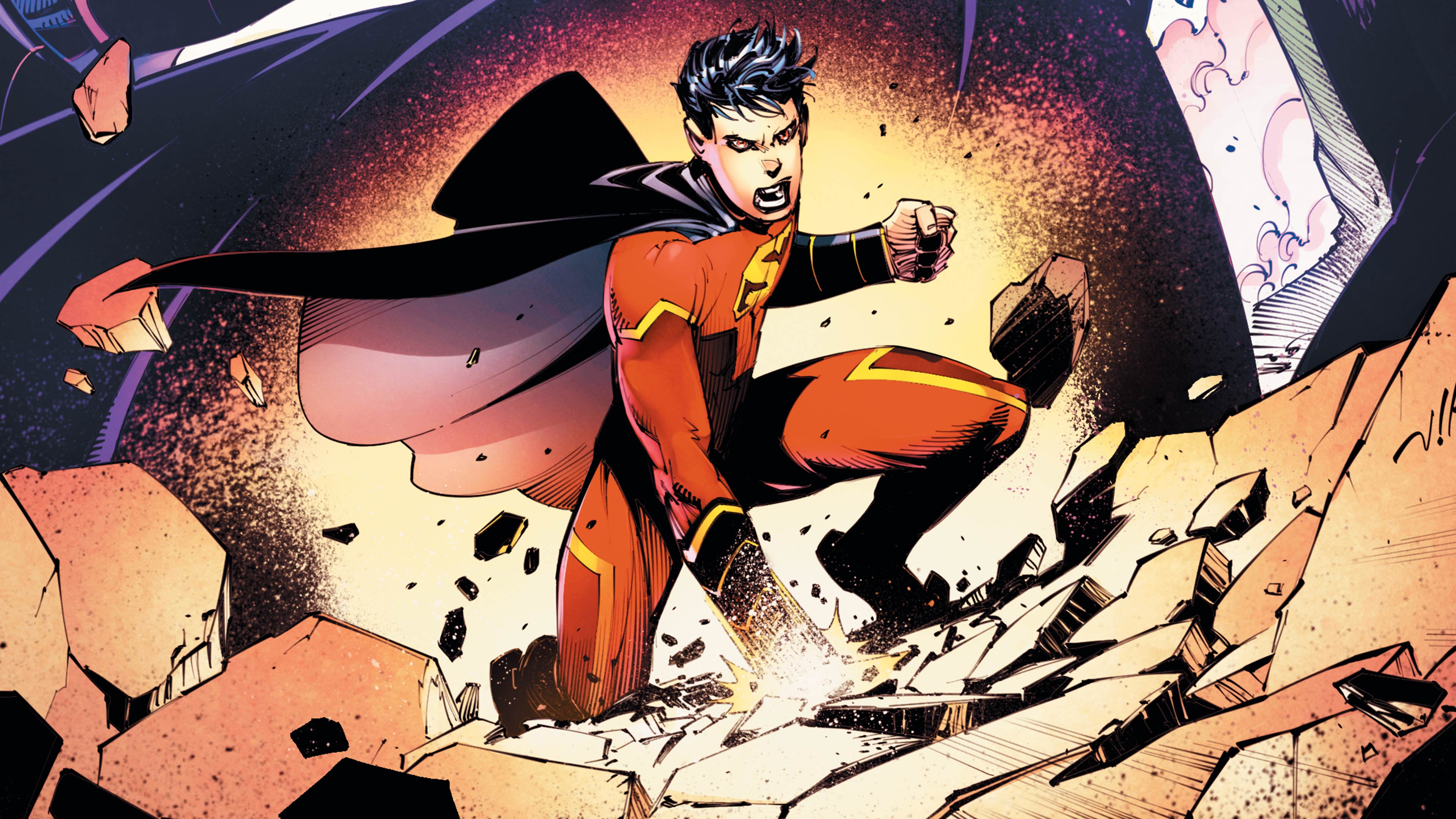 “Is 'New Superman' the only title that features the Justice League of China? Does DC have any plans for the future of the JLC?”

To date, the Justice League of China as a whole has only made three appearances outside of their own (EXTREMELY excellent) series — but the latest one is particularly important. The first is a one-page tale in the DC Rebirth Holiday Special, where the JLC celebrates Dongzhi, the Chinese Winter Solstice festival. Their second appearance is during a brief moment in The Flash #39, when Avery Ho, the New Flash of China, reunites with her old friend Wallace West, Kid Flash. The Justice League of China’s most recent appearance is one that gives us a significant update on the team’s status. In the backmatter of Doomsday Clock #5, we learn that China’s veteran team of the Great Ten and the new Justice League of China have joined forces to protect their republic as the Great Twenty. And most surprising of all, Kong Kenan, aka New Super-Man, serves as their team leader. We may not see too much of him in comics these days, but in China, it seems he’s held just as high as America’s own Man of Steel.

That’s all the cases on file for this week. But whether there’s a secret or mystery of the DCU that keeps you up through the Witching Hour, or it’s just clarification or guidance through our vast universe you seek, stop by my office in the Community. The best way to learn… is to ASK THE QUESTION.