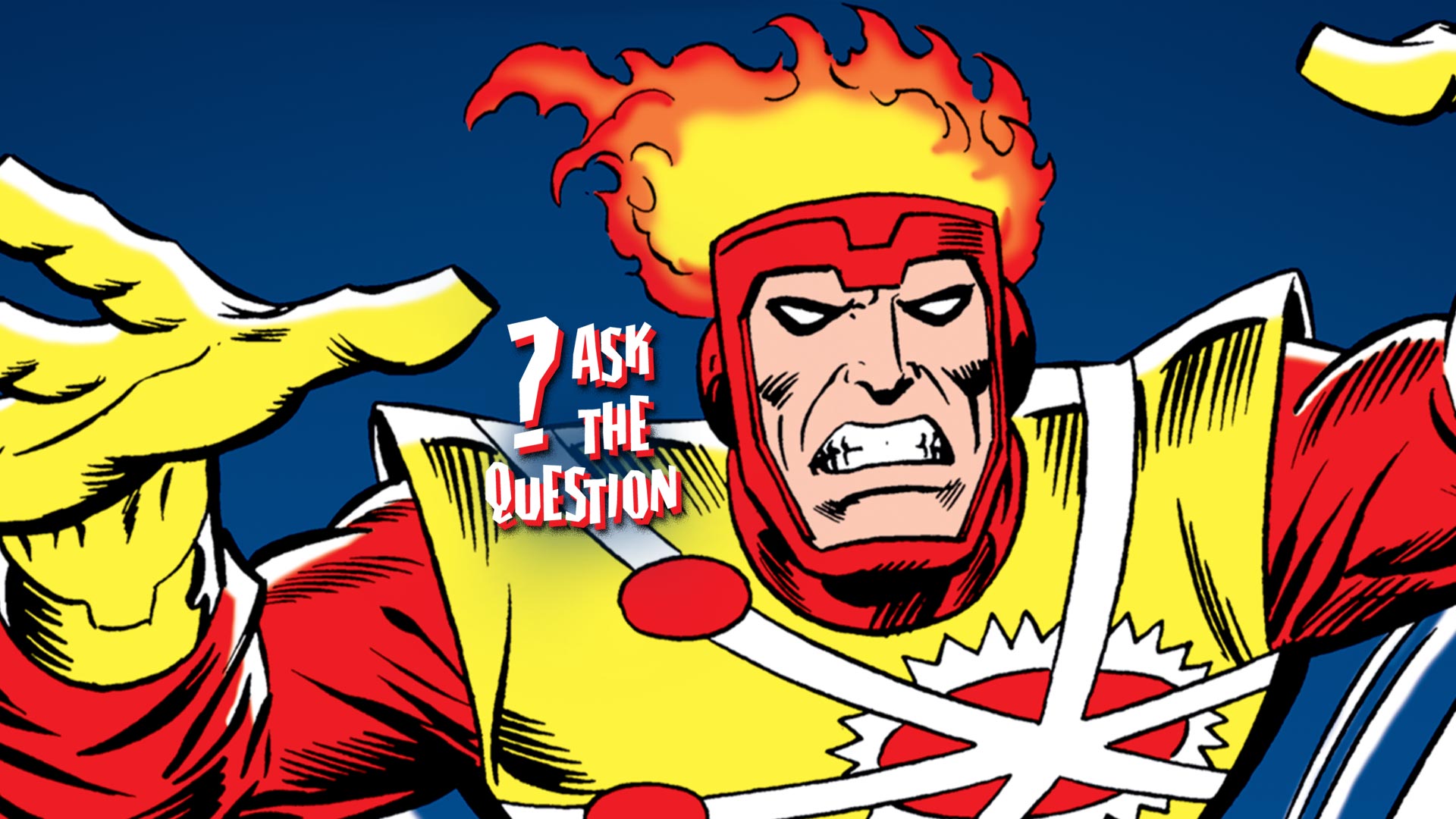 Ask...The Question: Where Has Firestorm Been Lately?

Hello. I’m Alex Jaffe, better known in our Community as HubCityQuestion. My personal mission: to take on any question you have about the DC Universe -- no matter how granular, obscure, or strange -- and present you with an answer. As a faithful steward of the truth, I offer my time in this weekly column to address these inquiries. If you’d like to submit one of your own, you can stop by my office at any time in our lively Community to state your case, which I will address in turn to the best of my ability. The world may be a dangerous place right now, but I remain at your disposal to venture the comic book cosmos and discover the answers you crave. Let us proceed with the mysteries of the week.

COME ON BABY, LIGHT MY FIRESTORM 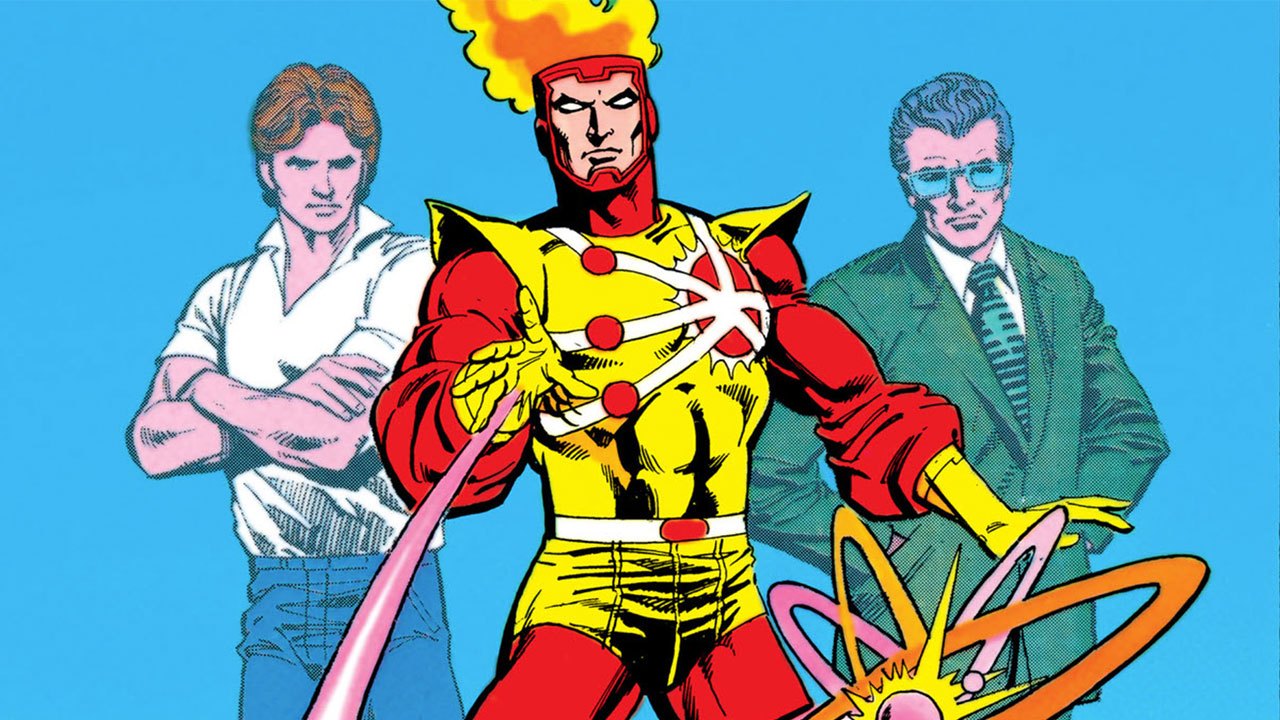 “My favorite character has always been Firestorm. However, I feel like he hasn’t been getting any attention in the past 3 years. Other than a one-off in Doomsday Clock and [minor] appearances in Justice League, where is Firestorm now? Is it still Ronnie and Stein, as it was at the end of their last solo story (that I know of)? Will Firestorm ever rise back into the spotlight of youngest hero enacted into the Justice League? Does he even play basketball anymore?”

It’s true that the Nuclear Man has been riding the sidelines for a little while. His last solo story, which you are perhaps alluding to in your question, was in the 2016 Legends of Tomorrow anthology which straddled the line between New 52 and Rebirth. Though Ronnie shared the Firestorm matrix with Jason Rusch throughout the New 52, this series by original Firestorm creator Gerry Conway reunited Ronnie in the Firestorm mantle with his original mentor, Dr. Stein.

Since the dawn of the Rebirth era, Firestorm’s biggest role in the main continuity has indeed been in Doomsday Clock. If you haven’t finished the series, then please read on as it continues to come to DC Universe -- Firestorm’s role in the “Supermen Theory” plot is a rather revelatory one, and one which may change Ronnie and Martin Stein’s relationship forever going forward.

Outside of the current timeline of comics, there are a few things I’d recommend you check out for more recent Firestorm action. First is Electric Warriors, a 2018 epic about the future of the DC Universe. Ronnie and Martin may not be in it, but the Firestorm matrix itself does play a rather significant role. There’s also the excellent Justice League Action animated series, where one of my personal favorite character actors, Stephen Tobolowski, plays the role of Dr. Stein. And finally, there’s the ongoing mega-popular DCEASED saga by Tom Taylor -- where Firestorm forms a crucial part of the resistance against a nigh unstoppable plague of Anti-Life powered zombies.

Unfortunately, I’m afraid that illustrious distinction of Ronnie being the “youngest hero enacted into the Justice League” just isn’t true, and hasn’t been for quite a while. In fact, maybe it never was. The ‘80s induction of Billy Batson—the hero now known as Shazam—has Ronnie beat by quite a few years. And before that, in terms of pure chronological age, Red Tornado was practically a newborn upon his induction.

And about basketball... it’s my duty to inform you that Ronnie’s b-ball playing days seem to be behind him (for now, at least). Since the dawn of The New 52, Ronnie has been more of a football guy, and thus he has remained. But as with any character course change, all it takes is one story to bring that back.

I DID IT MY SCHWAY 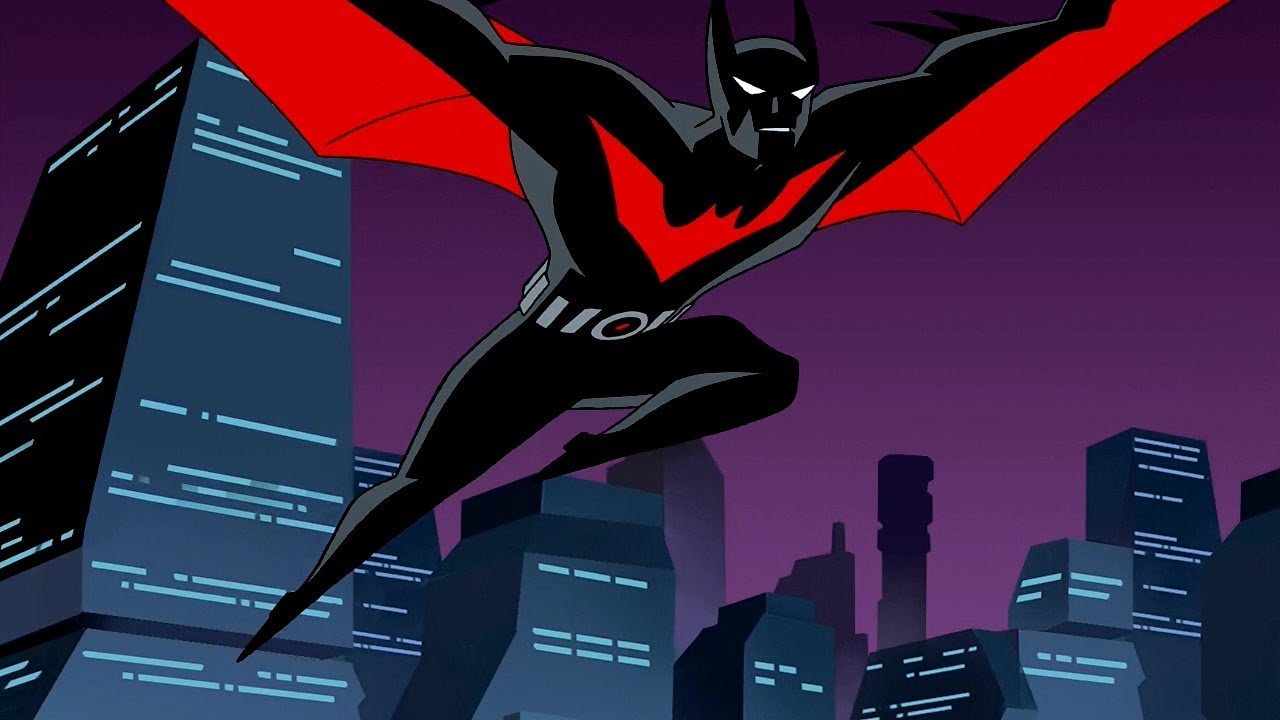 arkhamassassin here refers to a piece of 21st century slang which hasn’t quite caught on in the real world, but was prevalent through Neo Gotham in the time period of Batman Beyond. It’s also invoked by Nora Allen, future daughter of The Flash, in the currently ongoing Flash television series. For answers, I returned to the source material.

In DC Universe’s closed captioning for Batman Beyond, “shway” seems to be the preferred spelling: 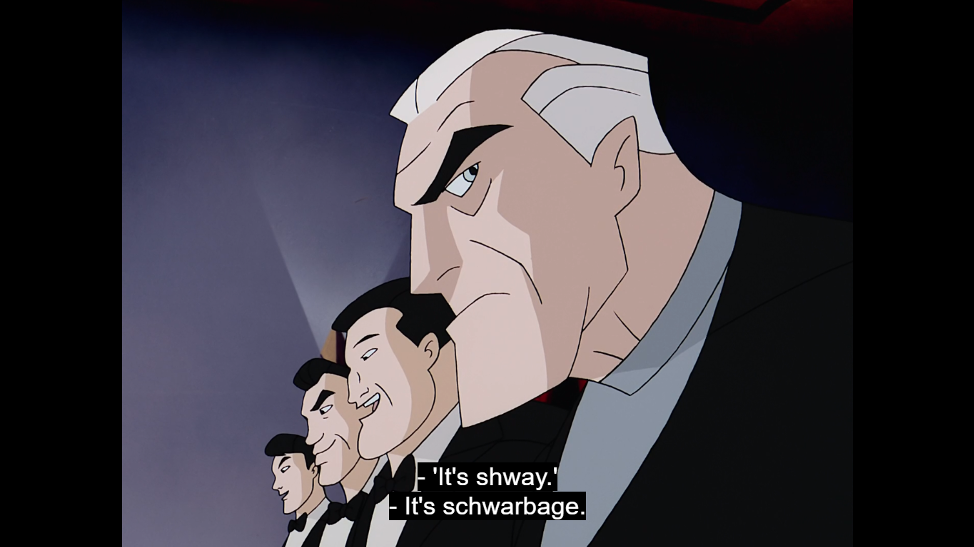 However, certain inconsistencies throughout the captioning have led me to believe that the subtitles used here are the product of a third party company, and may not necessarily be trusted as a canonical source. So, instead, as I am wont to do, I turned to comics for the answers… specifically, the Batman Beyond comics which ran contemporaneously to the original animated series.

In 1999, DC released a six-issue limited Batman Beyond series to coincide with the release of the show. The first two issues are a direct adaptation of the two-part pilot, “Rebirth.” But in issue four, a character drops the “s-word” for the first time: 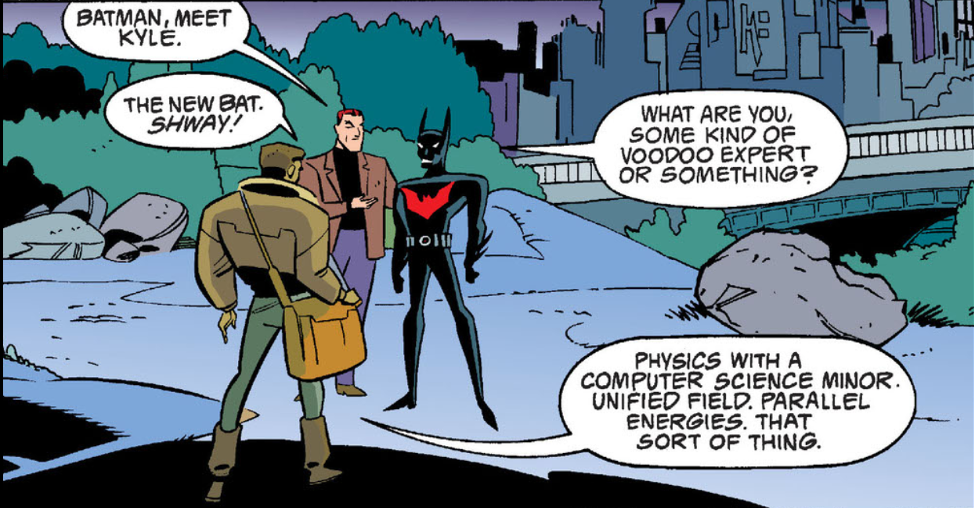 The success of this limited series led to an ongoing Batman Beyond comic later that year, which ran for two more years during the run of the show. Here, in issue #23, we see the “sch” permutation for the first time in textual canon: 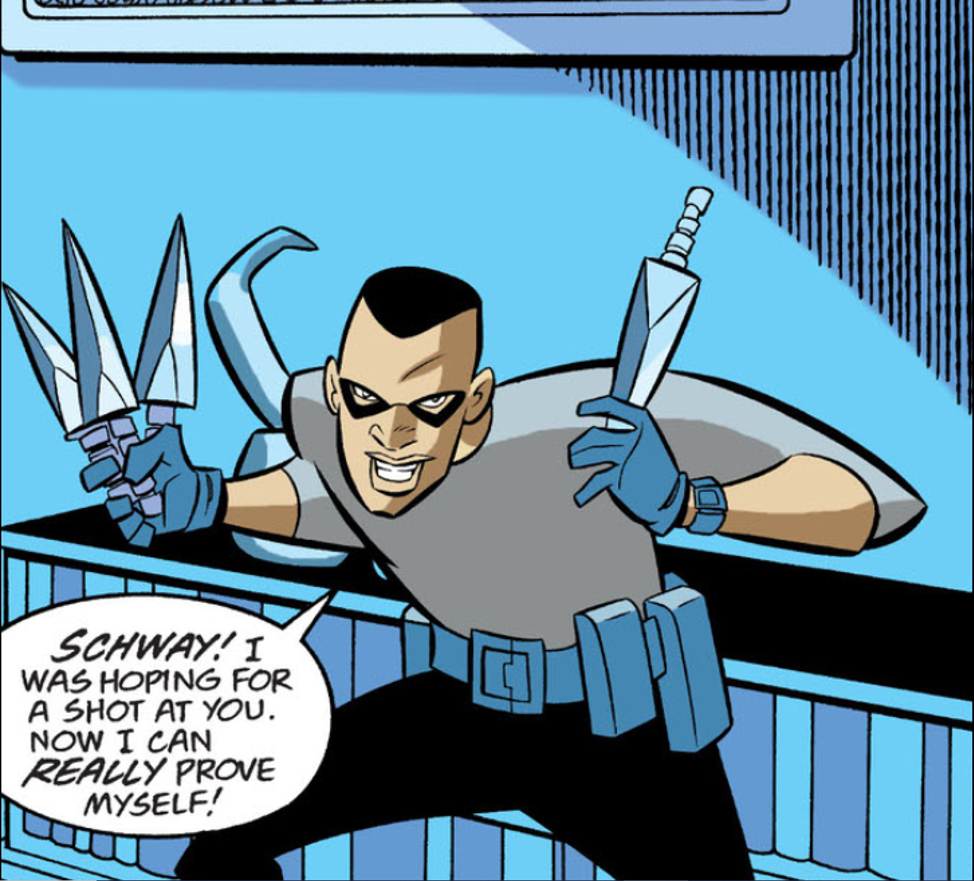 So, now we have an inconsistency. It’s “shway” in the first series, and “schway” in the second. The word isn’t used in the official comic adaptation of Batman Beyond: Return of the Joker at all. But about 10 years after the show first aired, Neo Gotham began showing up in comics again. Perhaps a consistent spelling was determined by that point?

First, in the grand return of Terry’s future to comics in the 2010 Batman Beyond series, the phrase is never used. Then, in early 2011, another Batman Beyond series was launched, and canceled after 8 issues to clear the decks for The New 52. There, the “sch” spelling is used once more: 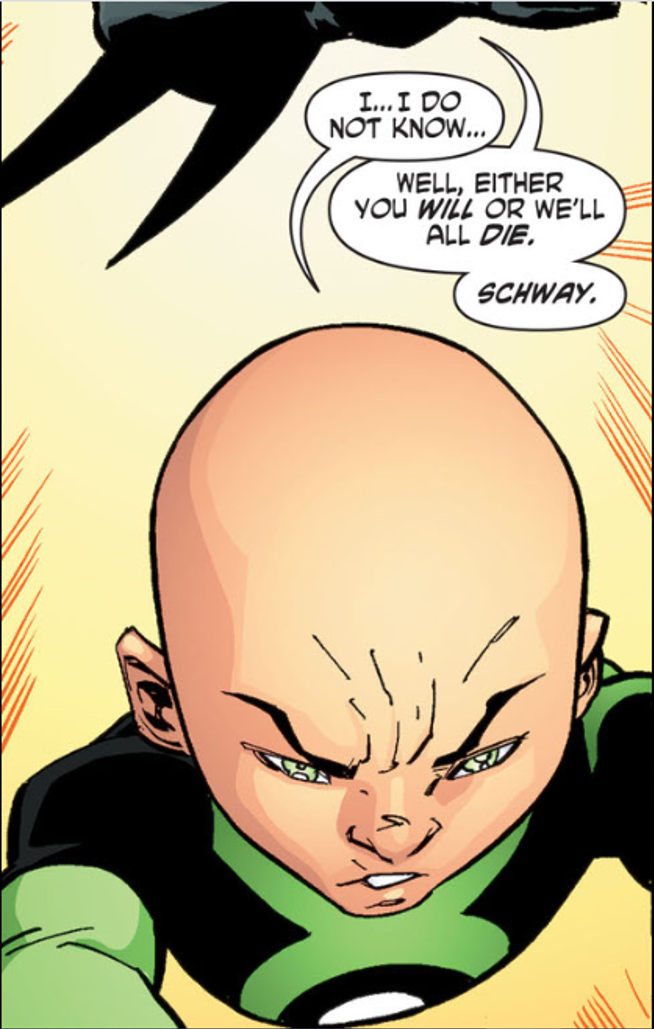 Batman Beyond returned to publication with a 2012 “digital first” series, where the “schway” spelling is preserved: 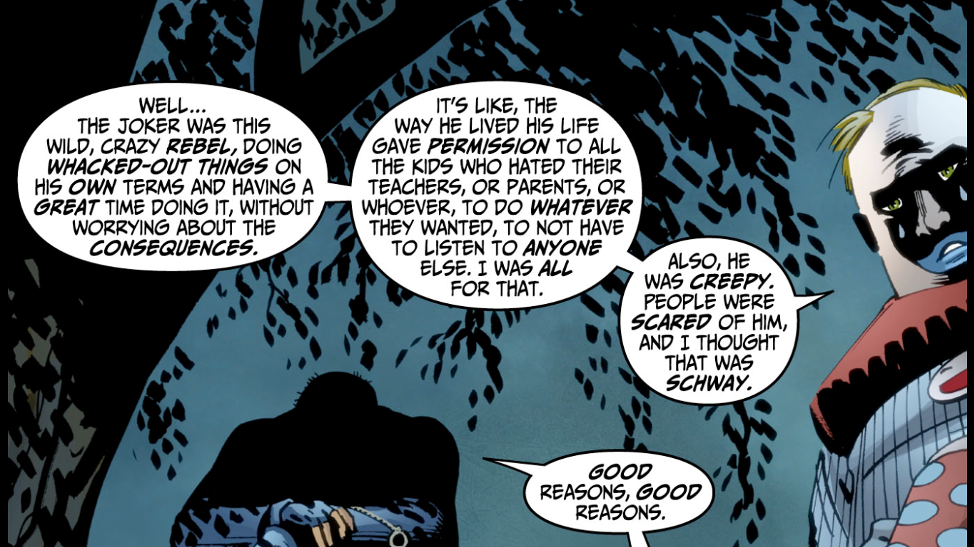 In 2013, the series was relaunched side-by-side with a new Justice League book set in the same time period, as Batman Beyond 2.0. The “schway” spelling remains intact: 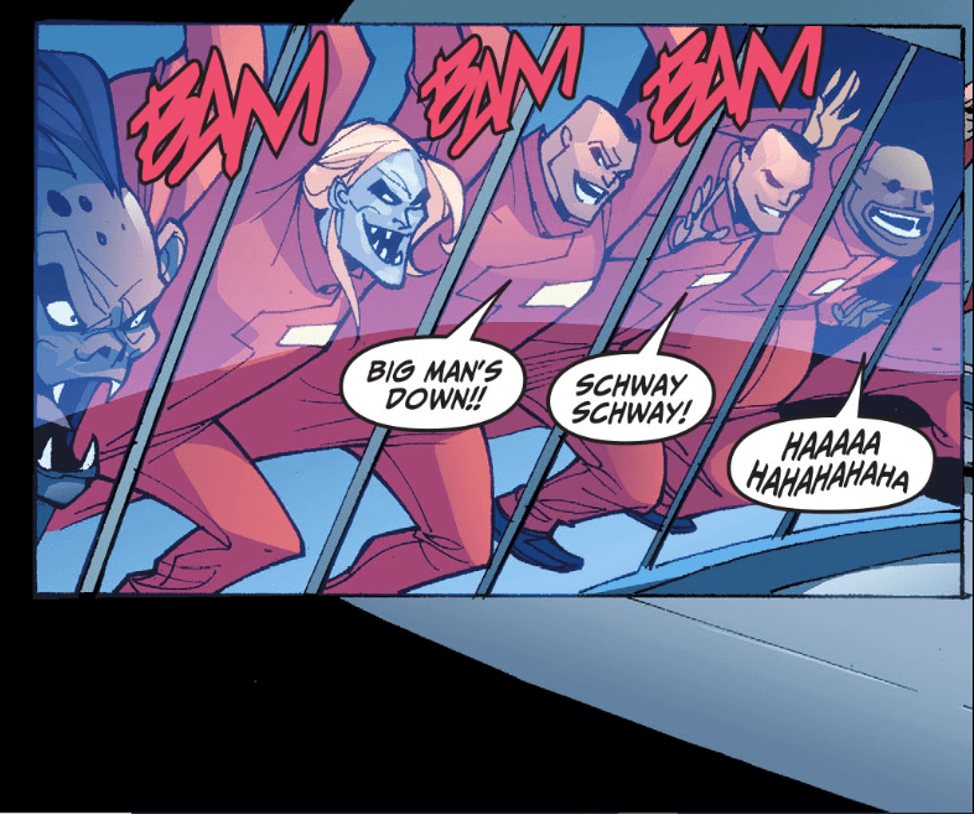 Then, in 2015, a new Batman Beyond book was launched -- the first to take place within the main DC Comics continuity. Originally in this series, Tim Drake filled the role of Batman Beyond, but it wasn’t too long before Terry suited up once more. Both the 2015 series and the post-Rebirth 2016 series are written by Dan Jurgens, who has retained that latter-day favored spelling: 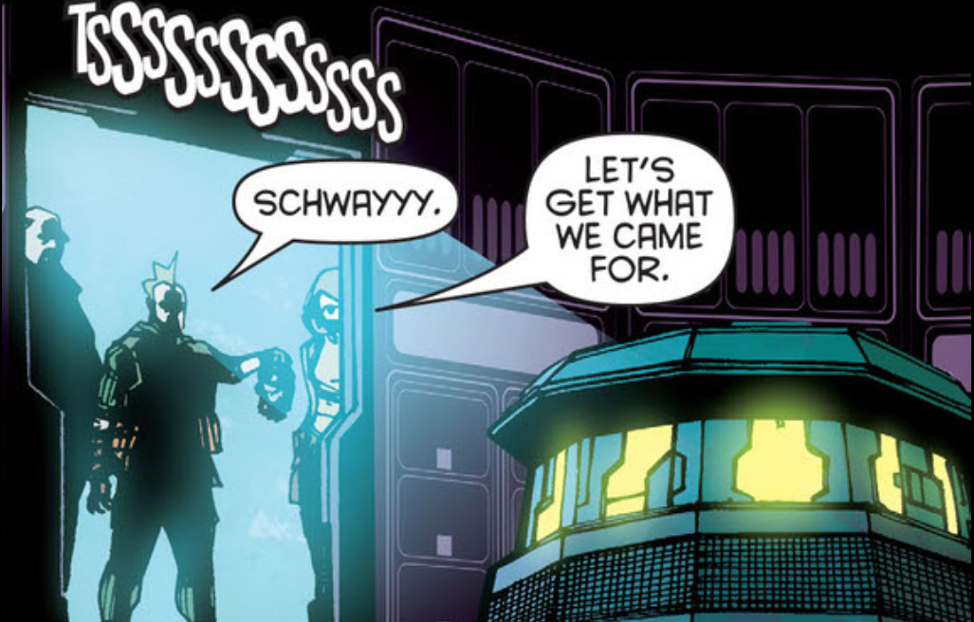 From all this data, we can draw one conclusion: while it might be true that the spelling was “shway” at one point, decades of writers have now reinforced a status quo which includes the “c.” I should say, though, that multiple spelling variations of informal slang is not necessarily uncommon. For instance: “jeez,” “geeze,” “jeez,” and “geez” are all equally valid spellings of the same exclamation. It’s entirely possible that both “shway” and “schway” are acceptable variants of the same term.

A CHANGE IS TRIGON COME 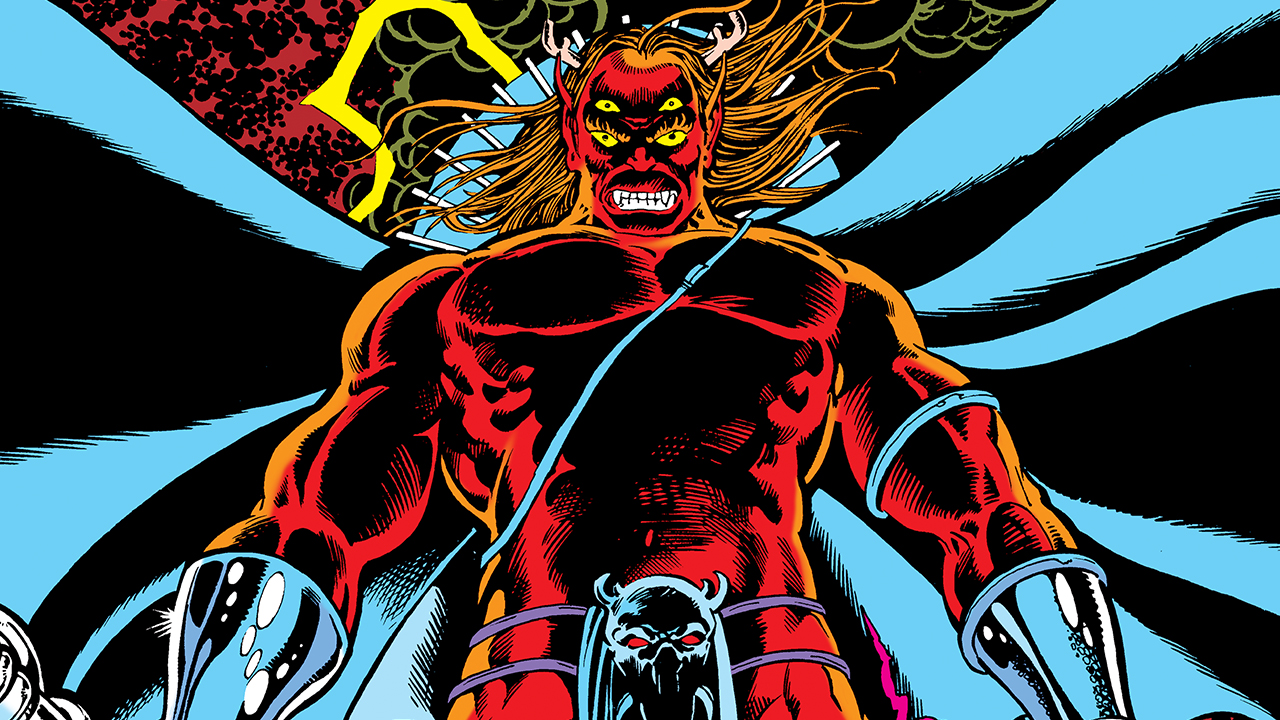 “Trying to recall Q, if the Justice League has ever taken on Trigon (in print). I know he’s been a bad boy in various animations, but can’t recall the League ever goin’ toe-ta-toe with Mr. Multi-eyes before. Nor have I seen any references to his ever coming into conflict with Darkseid. Can you shed some light on the subjects?”

You’ve hit on the crux of the New Teen Titans’ very existence here, wrightline. Back in 1980, the reason Raven formed the team in the first place is because the Justice League denied her pleas for help when Zatanna detected demonic influence. The anti-Trigon contingency IS the Teen Titans. Since Trigon’s first assault on Earth, Raven and her Titans have mostly been successful in keeping the world out of his crimson grasp before the point where the League has to be called in. One exception to that was during The New 52, when Phantom Stranger was called upon by a higher power to stop Trigon himself… by surrendering Raven to him. To this day, the threat of Trigon has never advanced to the point where the League had to be called in to bring him down. And if the Titans continue doing their job, they’ll never have to. 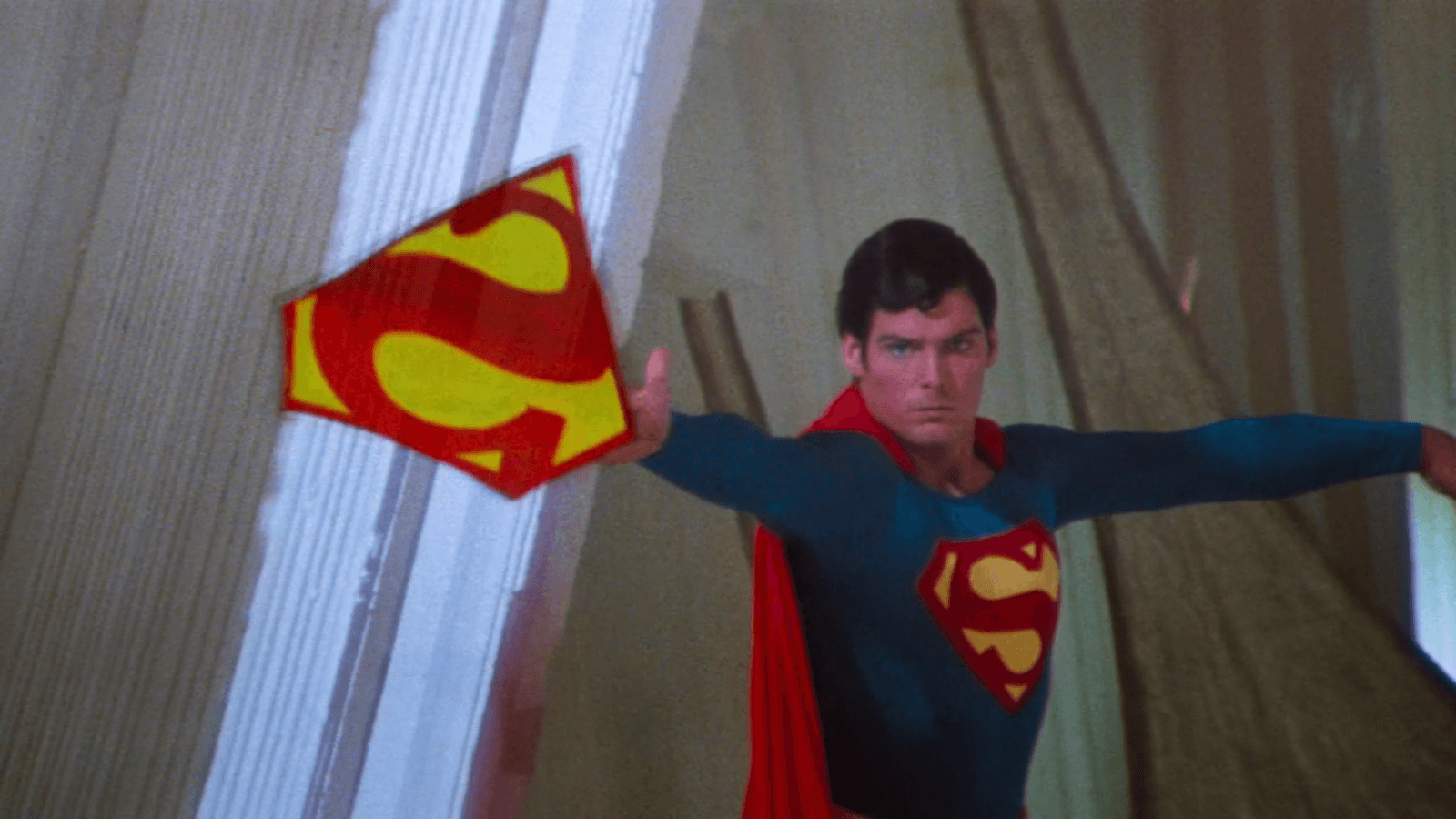 “So in Superman II, Superman somehow manages to throw the symbol on his chest like a net. Is this something that has ever happened in the comics, or was this just a case of Donner/Lester just making stuff up on the spot? And what exactly is the full catalog of the Man of Steel’s powers?”

In the late 1970s, when Richard Donner was developing both of the original Superman movies at once, he was taking a huge creative risk. The last on-screen hit DC really had were the Adam West Batman and Lynda Carter Wonder Woman series, each of which embraced a campy aesthetic which Donner sought to avoid. Rather than cloud his vision of Superman in kitschy irony, he wanted to play the character straight: he wanted to make you believe a man could fly.

At the time, the studio was wary. There was no proven market at the time for a serious Super Hero movie. Pressures mounted behind the scenes to make the script look more similar to dependable hits like the ‘60s Batman series. Goofy gadgets, slapstick comedy, all the stuff designed to go for laughs rather than pure wonder. While Donner aspired to higher than that, the studio ultimately decided to go in another direction -- and Richard Lester was called in to add those campy touches that Donner eschewed. One of those was that plasticine “S” that Superman throws off his chest at Zod and his cronies. Think of it, as you will, like Superman’s version of a “Bat-Shark Repellent.” It’s a baffling moment in the film because it’s MEANT to be.

Furthermore, a reading of the script itself suggests that the “S” may not be meant as one of Superman’s powers at all, but one of many illusory capabilities derived from the Fortress of Solitude itself where the battle takes place… but that’s a matter of interpretation.

You wanted a list of Superman’s powers, though! All right, here we go. We’ve got:

* Faster than a speeding bullet!

* More powerful than a locomotive!

* Able to leap tall buildings in a single bound!

* Can change the course of mighty rivers, and bend steel in his bare hands!

And there are probably a few more after that, but I don’t think they’re too important.

Well, that’s all from me for this week! Make sure to keep those inquiries coming, and I’ll continue to do my best to address each of your cases in due time. Don’t fret if I skip around, by the way -- sometimes I’ll come back to an older question which requires more research. I’ve got you all in mind! All you need to do for my attention is ASK… THE QUESTION.