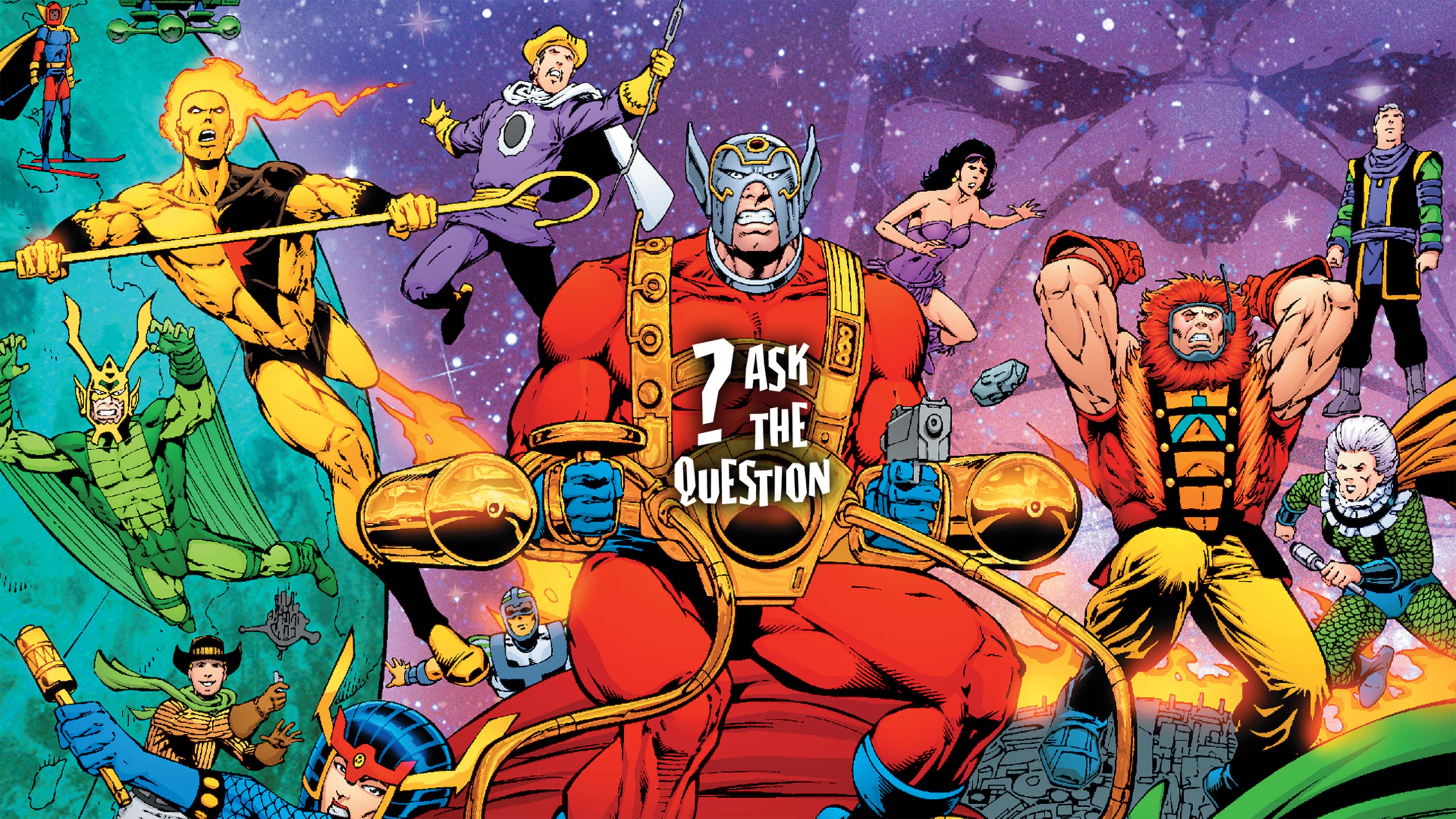 Ask...The Question: Where Did the Name "Fourth World" Come From?

Today, we have a pair of pressing questions about the work of Jack Kirby. 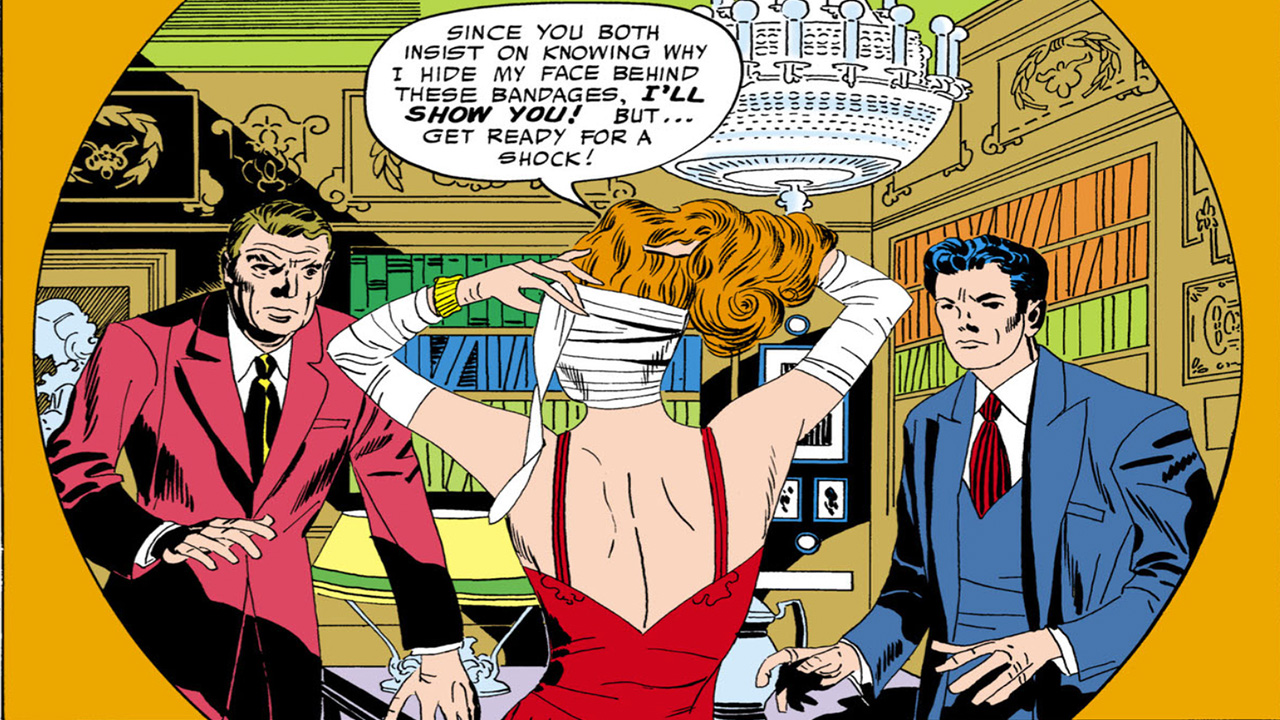 “What was the first DC owned character ever drawn by Jack Kirby?”

Let’s get the cute, catch-all answers out of the way first: as a work-for-hire publisher, every character drawn by Jack Kirby under his working relationship with DC is a DC owned character. And for all we know, Jack may have doodled a Batman or Superman long before he was hired to do so professionally for DC Comics. I assume, however, that you mean the first pre-existing DC character who the legendary creator drew on assignment for DC themselves. Golden Age history being as complex as it is, there are three answers I can give you:

In the nascent years of comics where Jack Kirby was helping shape the mythology of all the great publishers, accreditation and attribution was not as thoroughly documented as it was today. This is partially because publishers hired stables of artists who all worked on a comic together, scrabbling bits and pieces on top of each other’s work so that a story could get pushed out on time. It was quite common for a story to have one accredited artist, but with many less established “ghost artists” contributing to the finished product. (This is still common practice in the publication of Japanese comics today.) Before Jack Kirby’s first accredited story at DC, we know he spent some time in this role. But exactly which character he “drew” first is a matter of debate and speculation which comic art historians still can’t get a fix upon.

We are, on the other hand, fully aware of the first DC Comic to bear Jack Kirby’s name as writer and artist: 1942’s Adventure Comics #72. In this oldest of DC’s anthology series, Jack embarked on a two year run writing and drawing one of DC’s original mystery men, Sandman -- alias, Wesley Dodds. Though best known today for his original detective noir look featuring a gas mask and fedora, Sandman was reinvented with a more Super Hero style aesthetic in 1941. Along with new sidekick Sandy the Golden Boy, this was the version of the character who Kirby inherited as his first real assignment for DC. It’s quite possible that this was the very title Kirby began working on prior to his accreditation -- but, again, we may never know for certain. Over thirty years later, Kirby returned to the Sandman which broke his DC career with a new title, and a new, more fantastical hero of his own co-creation with Joe Simon bearing the mantle: Garrett Sanford, protector of dreamland.

This is the tricky wise guy answer, which I include because I know you pedants eat that stuff up. (Myself included, of course.) In 1940, before The King even began working with DC, Jack Kirby wrote and drew the newspaper edition of Blue Beetle, starring the role’s originator Dan Garrett. (Hm… could it be that Kirby’s own Garrett Sanford was named in his honor?) At the time, the Blue Beetle trademark was owned by Fox Comics. When Fox went bust in the 1950s, Blue Beetle was sold to Charlton Comics… and then, in the ‘80s, the Blue Beetle rights were acquired from Charlton by DC. So, from a certain perspective, the answer to this question from 1943 to 1983 would have most likely been Sandman. But now that the Charlton Heroes archives belong to DC, the history books have been changed so that Blue Beetle is now technically the first DC owned character drawn by Jack Kirby. And as we all know, “technically correct” is the best kind of correct. 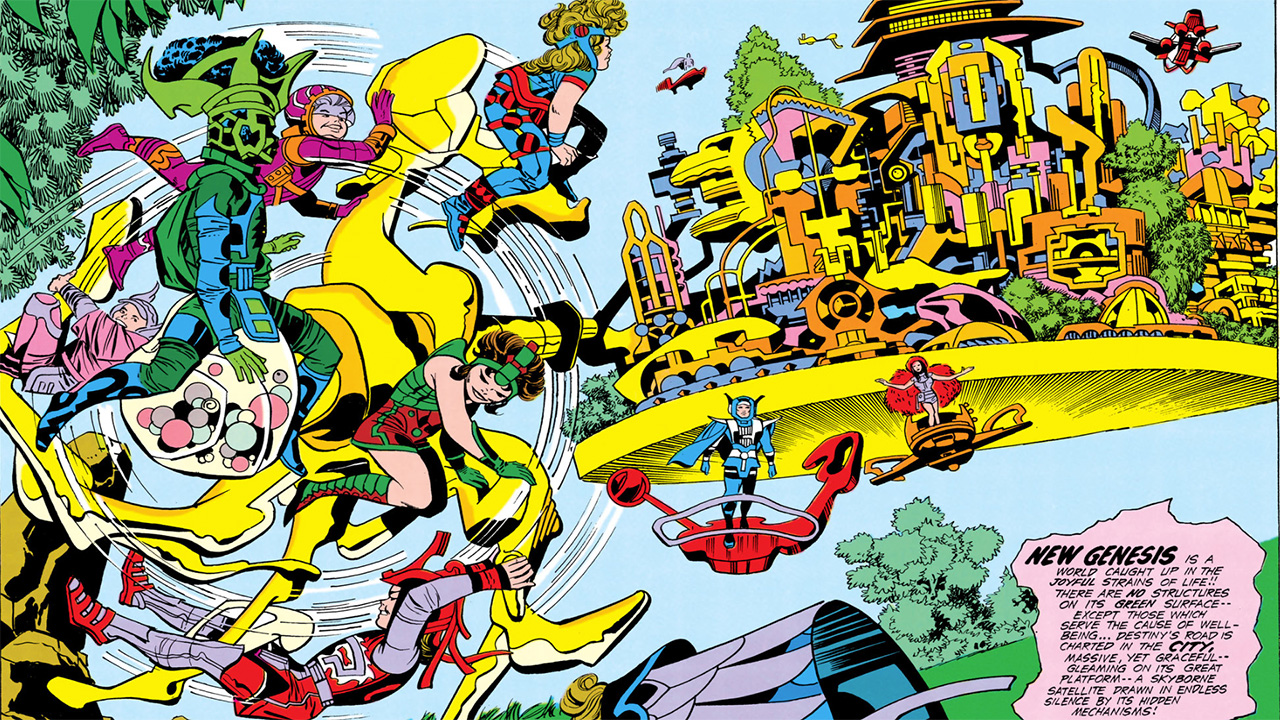 “I am familiar with the Fourth World, but recent issues of Justice League have referenced the First through Third Worlds. I don’t know a thing about those. Could you let us know a little about what they are, where I can learn more, and whose names I should know?

We’ll deal with your DC question first, because that’s ostensibly what I’m here to deal with. But we’ll see if I can get away with helping you with your other problems too.

Here’s the thing: the significance of the name “Fourth World” is never expounded upon in Jack Kirby’s tales of the New Gods. And while the status quo where the “Old Gods” which preceded them may presumably be the “Third,” it’s never signified as such in the stories themselves. As you’ve alluded, an attempt to reconcile this numeration was recently made by Snyder and collaborators in recent Justice League issues, though it remains one we know little about. Answers may arise in Snyder’s Justice League follow-up, Dark Nights: Heavy Metal, but honestly who knows.

Even as recently as Tom King and Mitch Gerads’ Mister Miracle, the “Fourth World” term remained one mired in mystery, as even the New Gods themselves wondered about its true meaning. Before that, Grant Morrison’s Final Crisis toyed with the idea of ushering in a FIFTH World, suggesting the popular notion that these numbered worlds exist in linear succession.

So, why did Jack call it the Fourth World? The truth, I’m afraid, is that nobody is quite sure exactly where the name came from. There are popular and sensible theories, but even Kirby, as the coiner of the phrase, was dodgy as to its exact origin, claiming he couldn’t even fully recall himself.

Some say that the “Fourth World” is a reference to DC’s early ideas of the Multiverse at the time: Earth One, or the First World, was home to the central DC Universe; Earth Two, or the Second World, was where the Golden Age stories took place; Earth Three, the Third World, was the morally upside-down home to the Crime Syndicate of America. And thus the Fourth World would be the realm of the New Gods.

But, I don’t buy that. Jack was rarely so navel-gazing when it came to the cosmology of the DC Universe. He usually preferred to create his own ideas and draw from other extraneous sources, rather than call back to internal concepts from his fellow comic writers. Kirby was a lover of mythology of all kinds, drawing from faiths and beliefs of cultures around the world and throughout history to inform his works. It’s therefore been posited that Kirby’s “Fourth World” is a reference to the Five Worlds of Navajo tradition, the Fourth World being where Man strives to be uplifted into the spiritual Fifth World.

I’m not sure I buy that either, though. While Kirby may have been familiar with some version of this mesoamerican legend, it is oddly specific. And frankly if it were true, I think we’d see more mesoamerican influence in the New Gods cosmology -- not to mention that the “Fifth World” would probably be a more suitable title to the themes Jack was laying down. Grant Morrison may have been more familiar with this idea of the term when crafting Final Crisis, but that doesn’t necessarily reflect on Kirby’s original intention. Personally, I think this is an Occam’s Razor case where the simplest explanation is the most likely: the one which reflects the world and the time where Jack Kirby was creating these stories.

In 1971, when Jack began his dream of the Fourth World, the world was ensconced in the frigid depths of a Cold War between two ideologies. These ideologies were capitalism, as championed by the United States of America, and communism, as supported by the USSR. Twenty years before Kirby’s New Gods, French sociologist Alfred Sauvy described the warlocked post-World War II society as a place of three worlds: a First World, where capitalism is practiced; a Second World, where communism is practiced; and a neglected and overlooked Third World, of nations too poor to participate in either system or engage with ideological coalitions. We still sometimes use the term “Third World” today to describe developing nations.

Kirby’s “Fourth World,” therefore, was a way of differentiating the strange science fiction adventures of the New Gods as something entirely alien to the Cold War couched reader. It was the idea that there was a world beyond the sniping between the Yanks and the Reds, one beyond the stars themselves, with drama and portent beyond your very imagining. In 1971, Kirby welcomed us all to escape the mundane but ever-present danger of our three worlds, and experience a Fourth.

And now, to answer your far more important second question. Inquiries such as this are precisely why the National Hot Dog and Sausage Council was founded by the American Meat Institute in 1994. You may be unsurprised to learn that this is one of the most common questions they receive. (The most popular, of course, is “Is a hot dog a sandwich?” Their ruling: no. A hot dog is its own thing.) The truth, they claim, is not some grand conspiracy to keep you in a never-ending cycle of buying more buns when you have too many hot dogs, and then more hot dogs when you have too many buns, but of two different industry standards which failed to communicate as this staple of American cuisine was being established. While butchers would cut and package sausage links in sensible metric demarcations of ten, standard-sized baking pans at the time only allowed bakers to prepare up to two rows of four hot dog buns at a time. This was all before the advent of supermarkets, so you would go to your butcher to get your dogs, and then to your baker to get your buns, and then to your candlestick maker so you wouldn’t have to eat in the dark. And the occasional bathtub rendezvous aside, these folks didn’t really talk to one another much until the industry standards were set. Or so Big Hot Dog wants you to think.

Anyway, if you’re still really concerned about hot dog/bun parity, just buy 4 packs of hot dogs and 5 packs of buns and freeze them. Then you’ll have 40 of each. Problem solved.

And that’s all the Fourth World Fun we have time for today! Come back next week when it will be my pleasure to address more of the cases brought to me right here in the DC Universe Community. All you need to do is ASK… THE QUESTION.