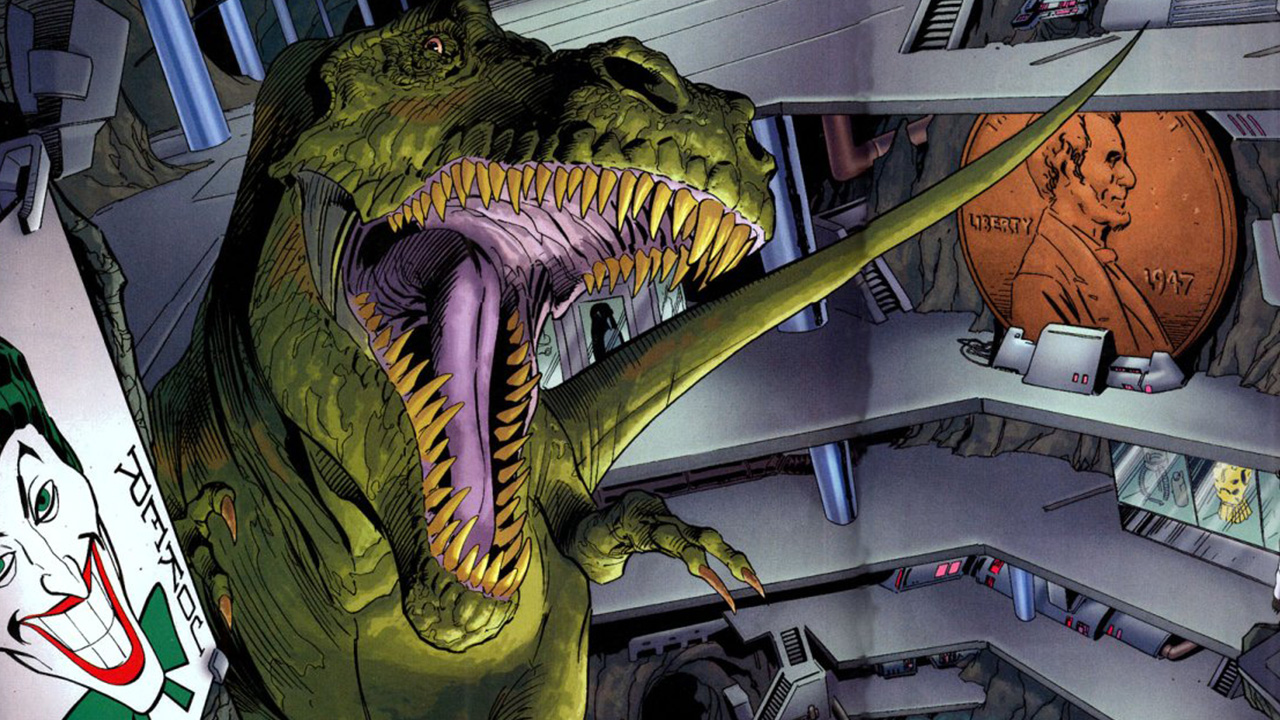 Ask...The Question: Where Did Batman Get All His Wonderful Toys?

Hello. I’m Alex Jaffe, better known in our Community as HubCityQuestion. My personal mission: to take on any question you have about the DC Universe -- no matter how strange, granular, or obscure -- and present you with an answer. As a faithful steward of the truth, I offer my time in this weekly column to address these inquiries. If you’d like to submit one of your own, you can stop by my office at any time in our lively Community to state your case, which I will address in turn to the best of my ability. As always, I remain your vigilant detective through the comic book cosmos to discover the answers you crave.

This week is the fifty-first installment of Ask The Question… which means we’re only one week away from a year’s worth of questions! To honor this milestone, I’ll be answering 52 of your most difficult, pressing questions. Only 4 slots remain as of this writing, so act fast in our special thread celebrating this milestone! And now, with business handled, let’s see what troubles our reading public this week, and which of your quandaries we might finally lay to rest.

Since Catwoman has expressed an attraction for certain older men, it got me to thinking. Have Ted Grant and Slam Bradley ever met? It seem likely that they’d have more in common than just Selina. Maybe they shared a case or two early on in their careers?” -Wrightline

While Ed Brubaker established them both as lovers of Selina Kyle in his 2002 Catwoman series, Slam and Ted would not cross each other’s paths until a particular black cat did theirs. As far as we know, first time these gentlemen shared space was in 2004’s Catwoman #37, where Holly invited them both as guests for Selina’s surprise birthday party—but it’s not until the “One Year Later” storyline in Catwoman #54-59 that the two work together for the first- and to date, only- time.

DON'T LET ME BE THE LAST TO KNOW (THAT YOU'RE BATMAN) 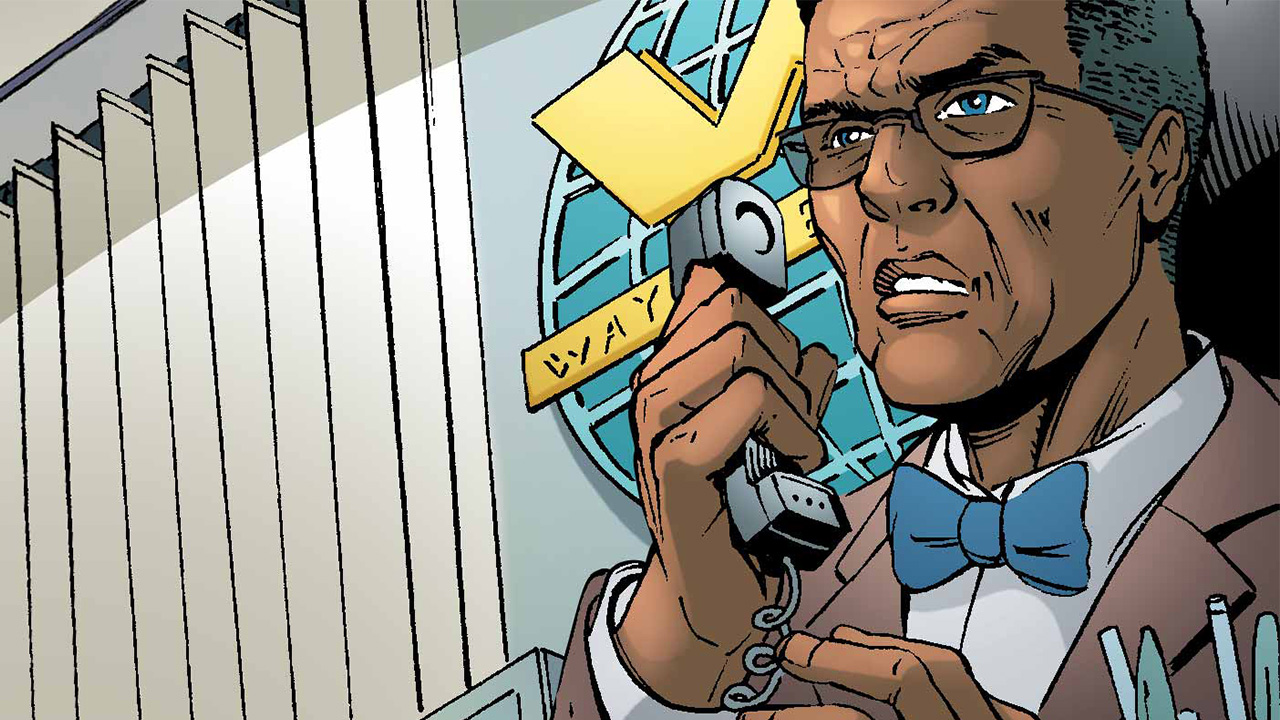 “When did Lucius Fox first find out that Bruce Wayne was Batman?” -Reaganfan78 and ScarlettSpeedFan23

While Lucius Fox has been a significant figure in Wayne Enterprises since 1979, it wasn’t until the 2005 film Batman Begins that the executive and technician took a central role in Bruce Wayne’s life. It was Christopher Nolan’s Dark Knight trilogy which first fully immersed Lucius in Bruce’s secret—and even after that, it took quite a while for that status quo to take hold in the comics. While video games like the Arkham and Telltale series took their cues from Morgan Freeman’s portrayal of an identity-savvy Lucius, the comics themselves maintained a separation for quite a while further. Beginning with the return of Bruce Wayne after Final Crisis, Lucius was first established in the comics to be developing technology for Batman—but only as a member of Batman Incorporated, a venture ostensibly funded by Bruce Wayne to support Batman. Even as Lucius’s son took up the role of Batwing, his father apparently remained unaware of the true connection between his employer and the Dark Knight. That finally changed… this January, actually, when James Tynion IV brought in Lucius as Bruce’s new operative in the Batcave.

GIANT PENNY FOR YOUR THOUGHTS 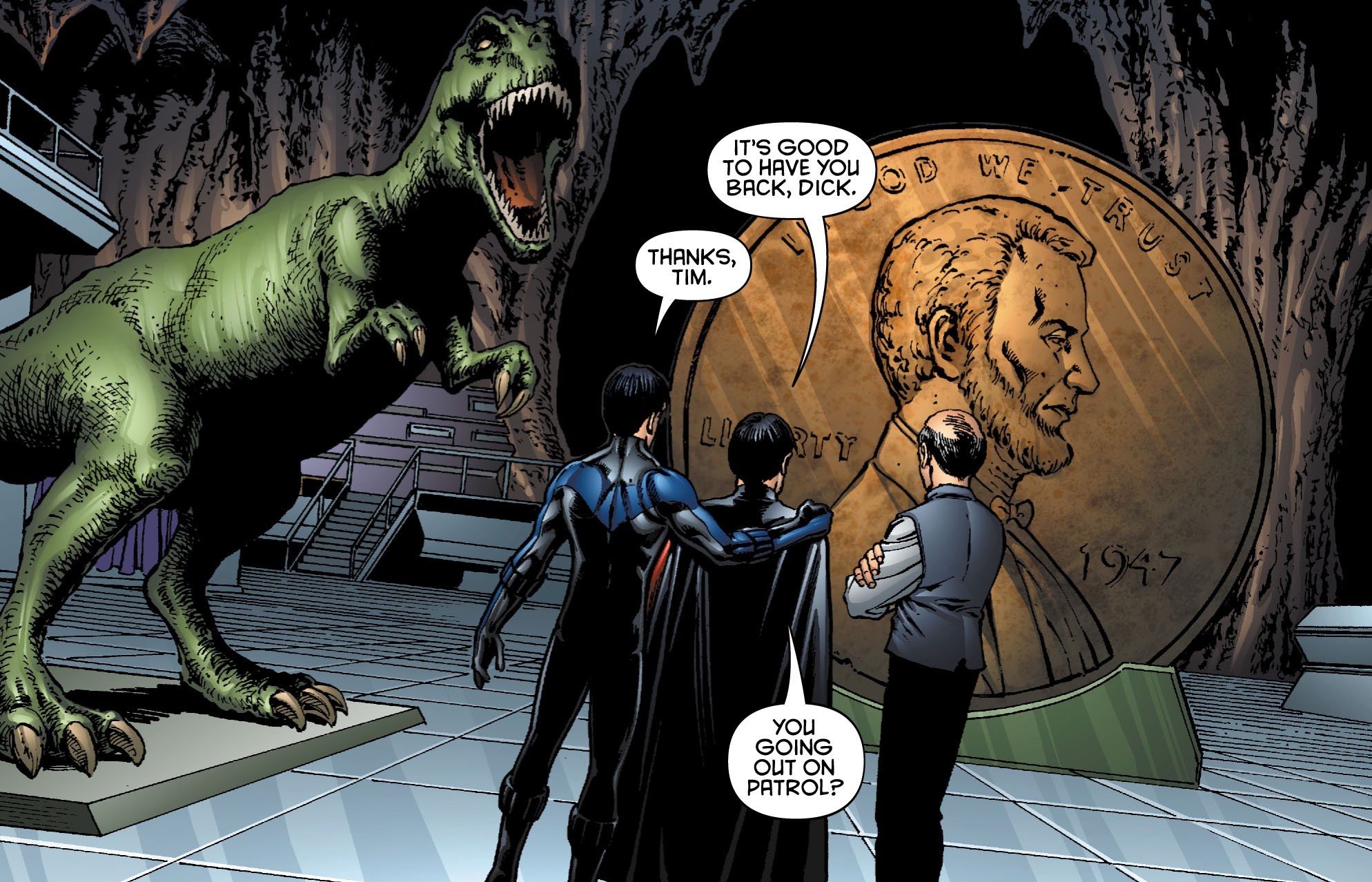 “In what comic does Batman’s legendary T-Rex first appear? Same goes for the giant penny.” -Behemoth (and many others)

Along with the giant Joker card, Batman’s T-Rex and giant penny have been Batcave staples since the 1940s. Curiously, two mechanical T-Rexes appear in two different early Golden Age adventures of Batman and Robin, each of which involve the dynamic duo getting trapped on an island of mechanical dinosaurs. While 1946’s Batman #35 is more commonly cited as the origin of this centerpiece of Batman’s trophy collection, an earlier possible account may be found in 1942’s Batman #10.

As for the giant penny, that particular souvenir is a memento of Batman’s early encounter with Joe Coyne, a long-forgotten Golden Age villain known as the Penny Plunderer. In 1947’s World’s Finest Comics #30, Batman first battled the penny-themed villain and his henchmen at a collector’s exhibition, which included the oversized novelty. Batman and Robin ultimately apprehended Coyne and his cohorts by dropping the penny onto them. This is why, in most depictions, the date on the penny is given as 1947. (Later accounts of the giant penny have the similarly coin-themed Two-Face taking credit for its origins, but I wouldn’t believe a word from that guy. Well… maybe every other word.) 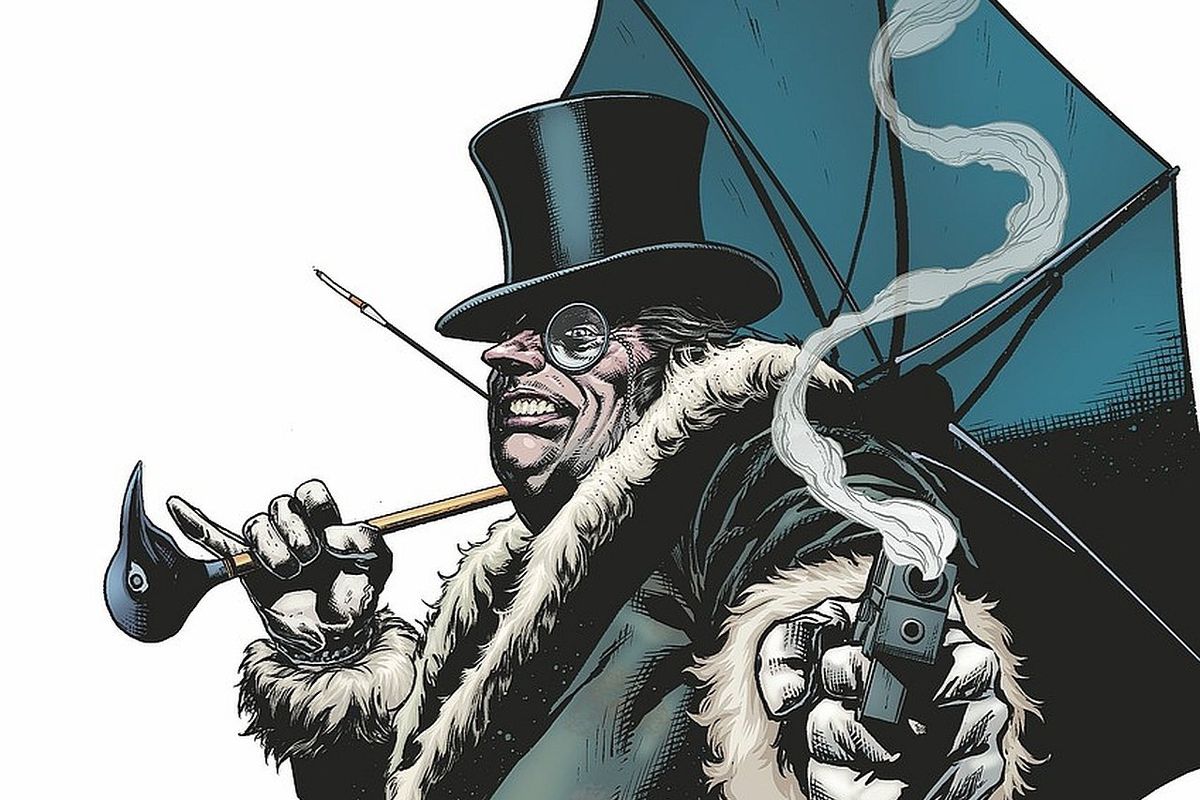 “Other than the Joker and Lex Luthor, who has been the most prevalent villain in DC history?” -Ralphsix

Like many of these superlative questions, we first need to set parameters. Both “prevalent” and “villain” are relative terms. For this exercise, I’d like to set those parameters as wide as possible. Between extended media, issues, collections, reprints, merchandising, and every other official avenue of content produced by DC from 1935 to today, the answer is Catwoman. Catwoman has been an inexorable part of the Batman brand since 1940 (give or take a decade), and the Batman mythology has just about always been more prevalent than that of any other branch of DC characters. But, that second parameter—the “villain” part—is trickier. Can we even call Catwoman a villain these days? Has she really been one since Frank Miller reinvented her as a modern day Robin Hood in Batman: Year One? Do we only count her appearances up until she began to flirt with antiheroism, or strike her from the roster of villainy altogether? For purity’s sake, and because it would frankly be a real pain to sort Catwoman appearances by moral alignment, I’m going to put her at the top with an asterisk.

Following Catwoman is a relative newcomer to the Batman family, and I bet you can guess who. Thanks to widespread merchandising, media depictions, double-shipped comics and team book appearances, and a boggling number of spinoffs, Harley Quinn has already climbed herself all the way up to the #4 spot—and it may not be that much longer before she surpasses Ms. Kyle. Quite a feat for a character who made her first appearance in 1992! But, like Catwoman, Harley’s status as a “villain” is a bit iffy these days, if not more so. Whether she’s a victim of Joker’s manipulations or a Chaotic Neutral antihero stepping out of his shadow, any classification of Harley Quinn as evil just doesn’t seem right.

Which brings us all the way down to #5, a name which may surprise you. Like 3 out of 4 of his superiors on this list, he’s another Batman villain. But while he’s not quite as active today as he once was, this crimelord/legitimate businessman has been a consistent thorn in Gotham’s side since 1941. I speak, of course, of Oswald Cobblepot, better known behind his back as The Penguin. As a flightless bird, perhaps the reason Cobblepot has survived this long in Batman’s bad graces is because he knows how to stay under the radar. But as long as there’s corruption in Gotham City, we can be certain that The Penguin will be a part of it. 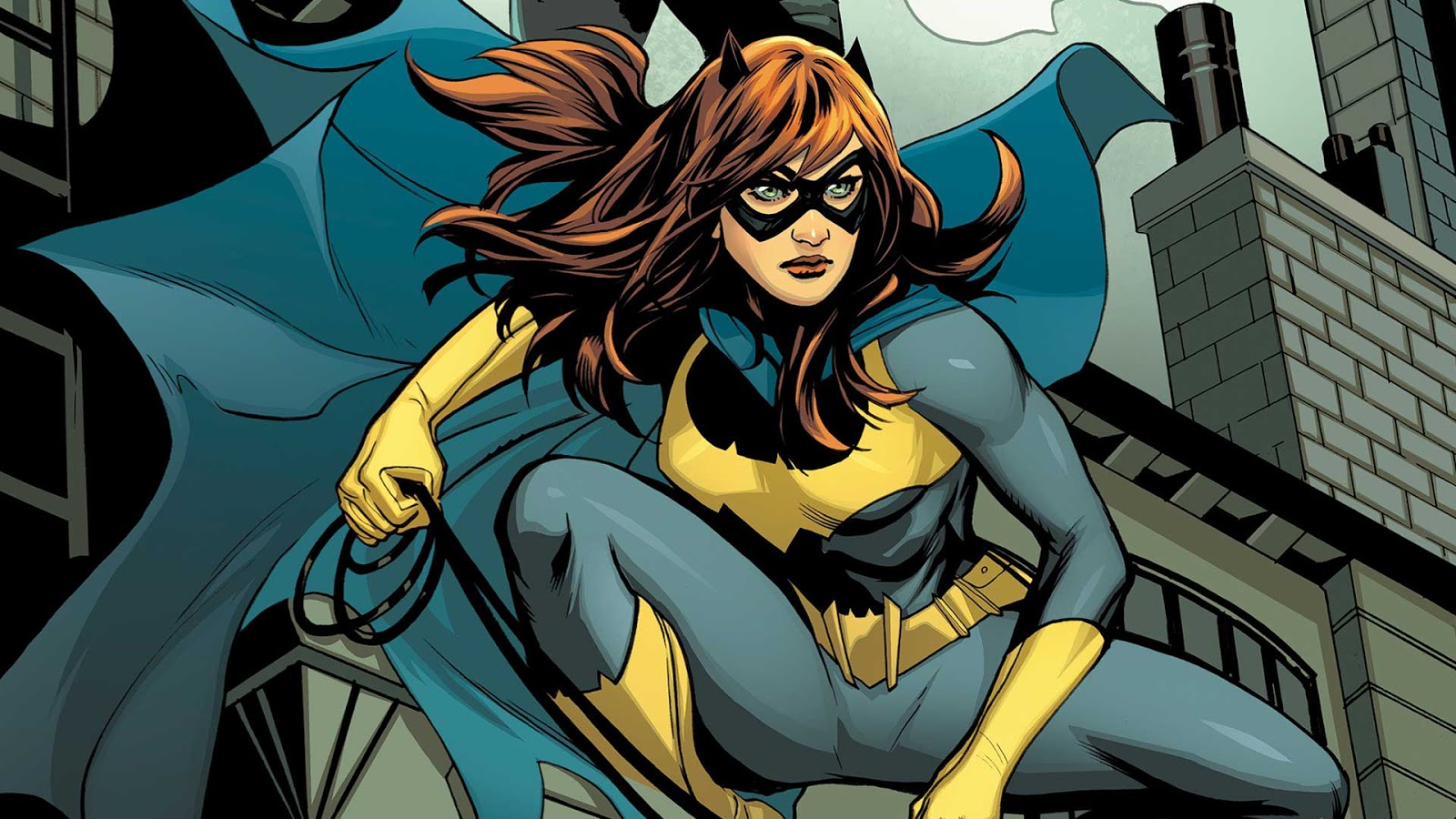 “Catching up on the column I noticed some comment on Barbara Gordon being elected to Congress way back when. I’m (cough) old enough to remember when those issues came out and I remember in the letters pages that ran at the end of the issues it was quite controversial. Somebody pointed out that a Congressman had to be at least 25 years old. That made Babs quite a bit older than Dick and DC was inferring a romance between them at the time. Shortly after that I believe DC addressed the issue in story by something called the Knight Act.

Apparently it had something to do with Sandra Knight the Phantom Lady and having certain legacy persons being elected or appointed to Congress before the age of 25 under special circumstances. This deaged Babs and made her and Dick closer in age. Do we know of any other instances where the DCU laws deviate radically from ours?” A2.ton

While many necessary laws exist in the DC Universe to cope with the rise of superheroics and supervillainy, I can think of a few specifics:

* The Keene Act, first introduced in Watchmen, was originally a law which demanded the immediate arrest of vigilante Super Heroes. But a different version of the Keene Act was established in Ostrander and Yale’s Suicide Squad as a law which makes it easier to convict costumed Super-Villains, providing a direct pipeline to Amanda Waller’s team of misfits.

* The Sprang Act, introduced in Arkham Asylum: Living Hell. Ever wonder where all the fanciful themed architecture from the Silver Age went in modern depictions of Gotham? In Living Hell, we learn that the Sprang Act—named for the artist Dick Sprang, often responsible for such memorable frivolities—was passed in order to sanitize Gotham’s skyline as a way of discouraging themed Super-Villain activity from taking over whichever business fit their milieu.

* Finally, while less explicit, it’s undeniable that the “insanity” defense is far more common—and far more accepted—in the DC Universe than it is in our own world. According to a PBS study, less than 1% of criminal cases in America are presented with an insanity plea. Of those, only 26% have a success rate. In Gotham, at the very least, those numbers are clearly much higher.

But as long as you keep bringing me YOUR cases, I can guarantee a success rate at least somewhere over one-in-four. I’ll see you all in one week for our celebration of 52 columns! Until then, I eagerly await the next time you dare to ASK… THE QUESTION.