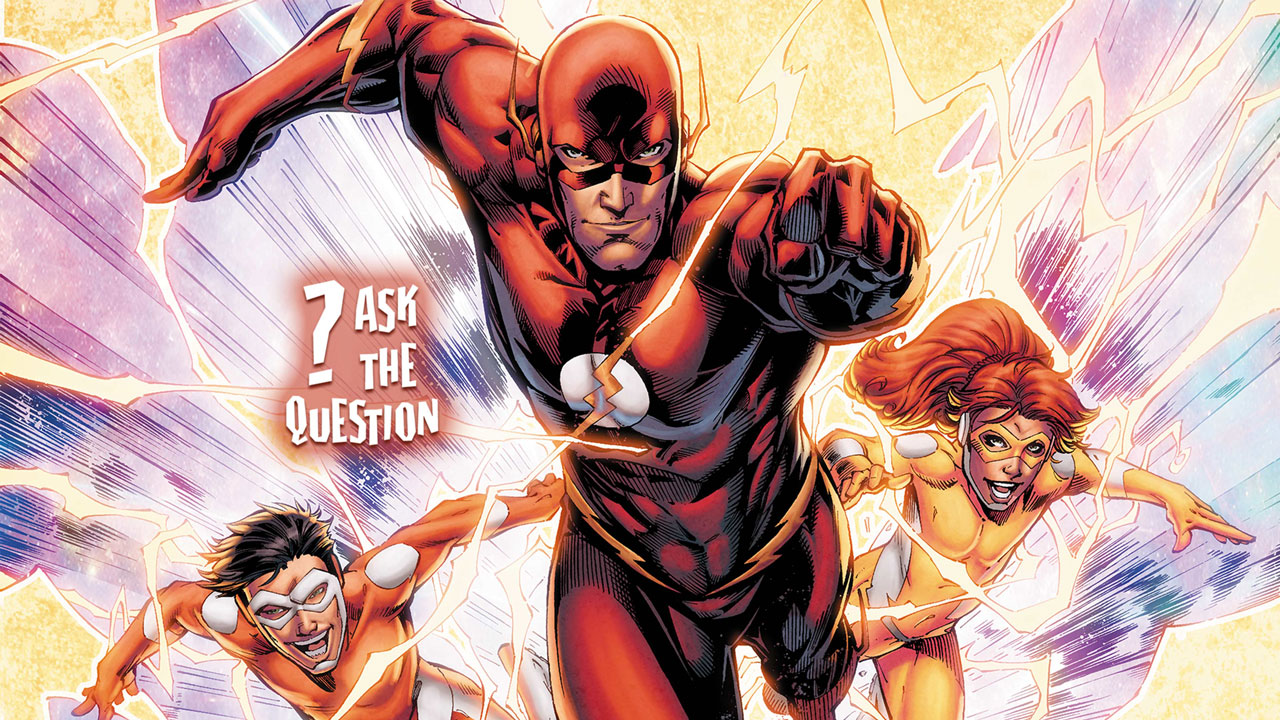 Ask...The Question: Where Can I Get to Know Wally West's Speedster Kids?

Hello. I’m Alex Jaffe, better known in our Community as HubCityQuestion. My personal mission: to take on any question you have about the DC Universe -- no matter how strange, granular, or obscure -- and present you with an answer. As a faithful steward of the truth, I offer my time in this weekly column to address these inquiries. If you’d like to submit one of your own, you can stop by my office at any time in our Community to state your case, which I will address in turn to the best of my ability. No sense putting it off: let’s get to the questions. 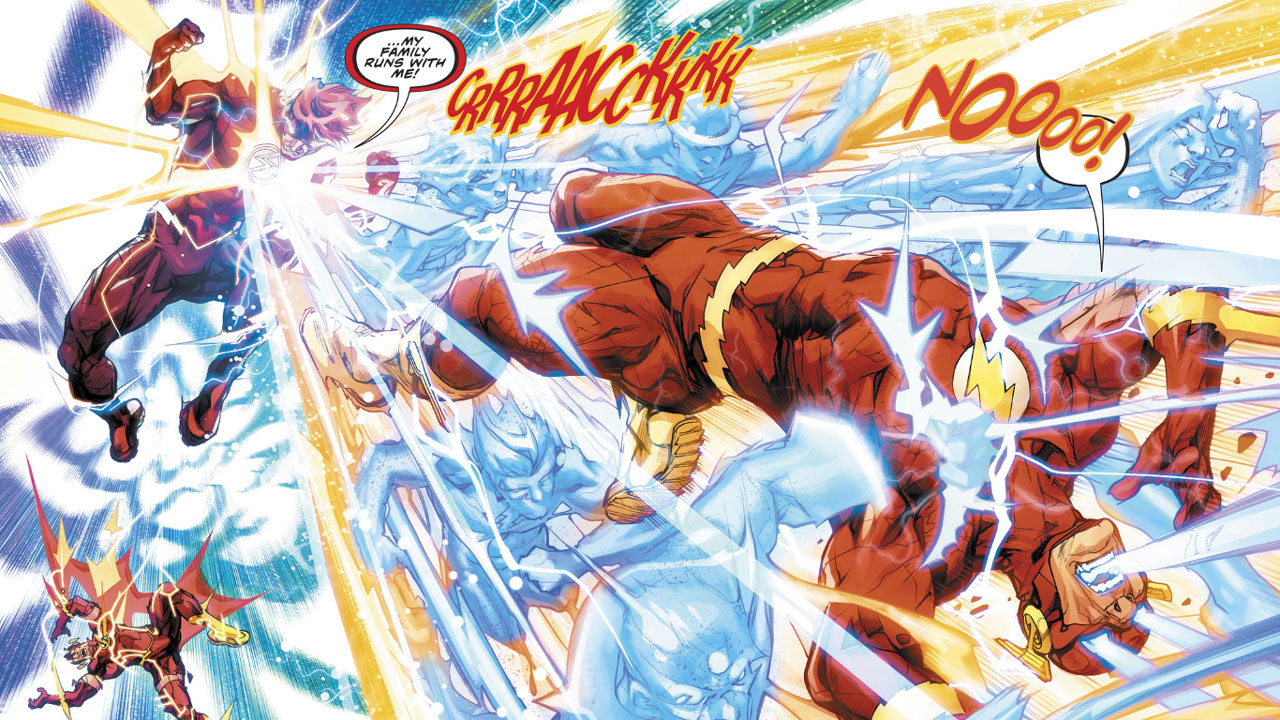 If you came up in the comic-book world in the Post-Crisis, Pre-Flashpoint era, then your Flash is almost certainly Wally West. For over 20 years, Wally was the center of the Flash Family, only to lose himself in the time stream with the advent of the New 52. Wally’s lost family and history has been the core of his angst since his return in DC UNIVERSE: REBIRTH. And while Wally’s history continues to untangle through HEROES IN CRISIS, FLASH FORWARD, and DARK NIGHTS: HEAVY METAL, it’s worth going back to those original stories to get a sense of the lost twins he’s fighting for: Jai and Irey West-Park, the junior speedsters of tomorrow.

Like a shocking number of concepts introduced to mainstream Pre-Flashpoint continuity, the West-Park twins debuted as a background concept in the world of KINGDOM COME, depicting a potential cataclysmic future of the DC Universe (although there, Jai was named “Barry”). Incarnations of Wally’s future children continue to appear through its sequel, THE KINGDOM, the “Chain Lightning Saga” from 1998’s THE FLASH #143-150, and 2000’s TITANS #23-25.

In the mainstream timeline, Wally’s wife Linda Park was originally carrying twins until Zoom attacked her in 2003’s THE FLASH #199. But Wally’s next battle against Zoom through the timestream in THE FLASH #225 would prevent that attack, bringing two healthy twins into this world.

Unlike their predecessors, Jai and Irey West-Park weren’t connected to the Speed Force through a confluence of events later in their lives: they were born into it. The complex implications of that are explored throughout their appearances until FLASHPOINT, which I’ll collect for you here. Here’s an exclusive, exhaustively complete DC Universe reading order for Wally’s rambunctious tykes:

THE BRAVE AND THE BOLD #8

And that’ll take us up to the current era, where Wally is still figuring things out.

I LOVE A PARADE 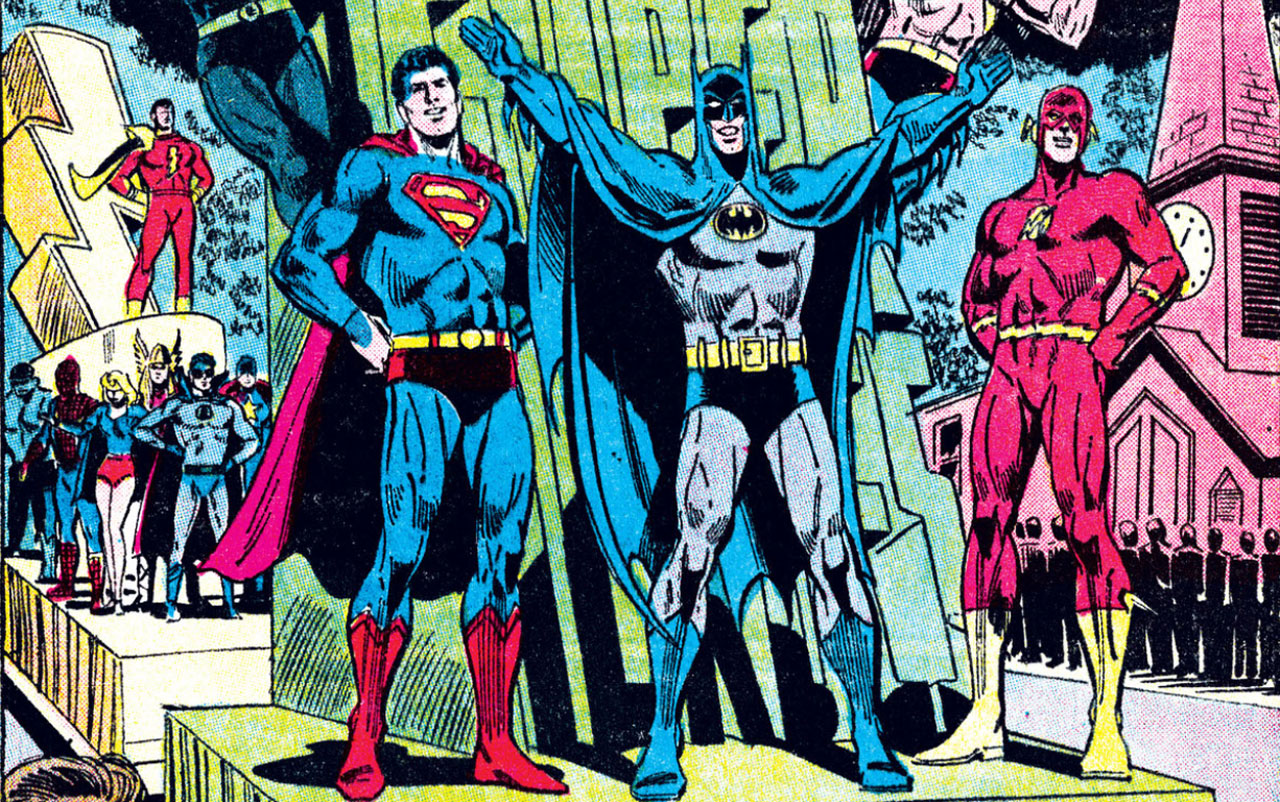 “What’s the deal with the Rutland Halloween Parade?” -TornadoSoup

In 1959, Tom Fagan of Rutland, Vermont -- a reporter and editor for The Rutland Herald and lifelong comic book aficionado -- had a very silly idea. Fagan was determined to put his town on the map. How? By making it a Halloween destination. So, Fagan took out ads and wrote into letter columns for some of the most widely read comic books you could find on the shelves, advertising the “Rutland Halloween Parade”: an aspiring annual tradition inviting comic book fans from all over the country to cosplay as their favorite comic book characters and join a sort of mobile, roving convention through the streets of Rutland on Halloween night. As its legend grew, the Rutland Halloween Parade gained a reputation as the only time and place where heroes could intermingle with one another across publishing lines.

Charmed by its earnest positivity for comic book culture and the Halloween spirit alike, many publishers started including tributes to the parade in their own comics through the years. And of course, DC was no exception. The Rutland Halloween Parade was first celebrated in the DC Universe in 1971’s classic BATMAN #237. It made further appearances in comics like JUSTICE LEAGUE OF AMERICA #103 and #145, and as recently as 2009’s DC SUPER FRIENDS #20. In the late ‘00s, Rutland, Vermont was even established as the home base for the Secret Six.

Today, Fagan’s dream has become a reality, as the Rutland Halloween Parade persists into its sixth decade. Here’s hoping we’re in a good enough state by October to keep it going in 2020.

THE “S” STANDS FOR SAVINGS 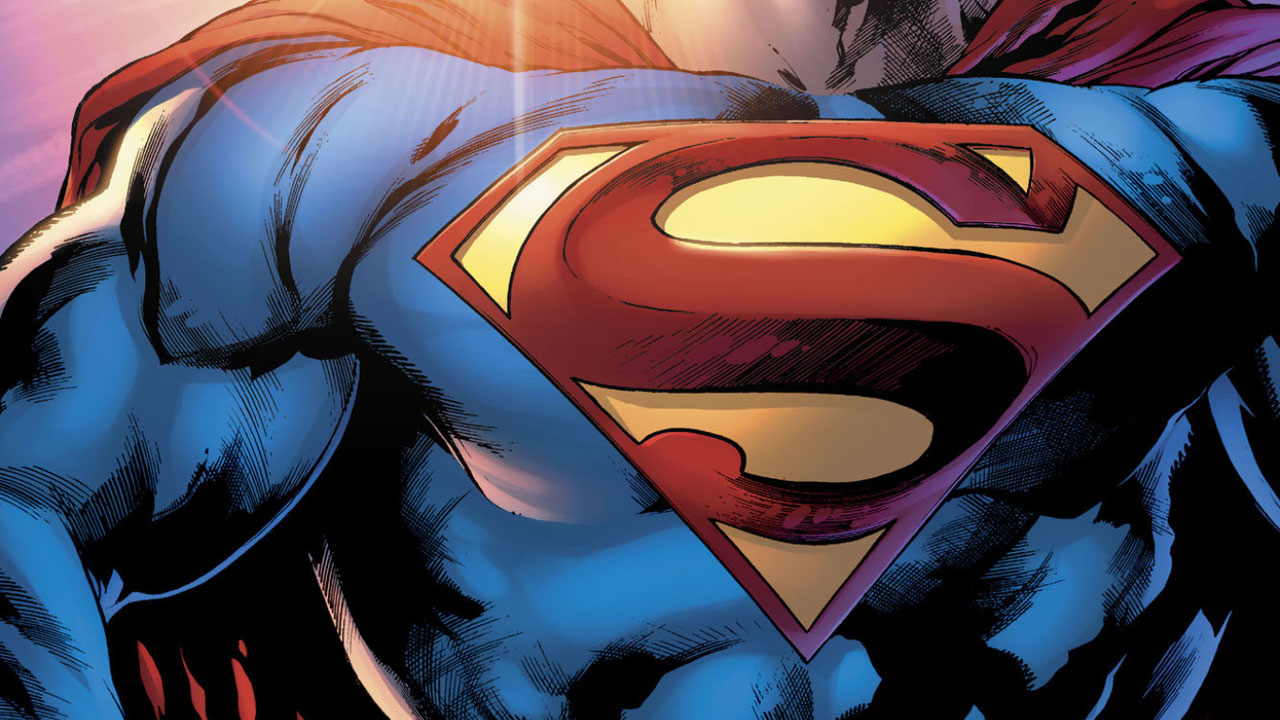 Today, I pulled SUPERMAN FROM THE ‘30s TO THE ‘70s off the bookshelf, the very first hardcover collection of Superman material ever published. Yet, in looking through it, from his first appearance in comics, on radio, the first serial, and through the first tv series, there is no explanation given to why the ‘S’-like symbol appears on his costume, or what it means. Remember, all this is before reporter Lois Lane comes up with the "Superman" name for the press.

Since then, many people have just come to associate one with the other. It isn’t until the first Superman movie in '78 that we learn the symbol is the Kryptonian family crest, for the House of El. Little did Brando know that his suggestion about the ‘S’ emblem would have such historical ramifications.

So, why did Martha Kent include it on the costume she made for her adopted son? She had no idea then, what it was, or stood for. Was it on the rocket, like Ford sticks an emblem on their cars? Or on one of the baby blankets, like Hilton monograms their towels? Or better yet, am I fretting over nothing? That all this had already been addressed in some Rebirth Superman title or other? What say you, Captain Q?” -Wrightline1.42741

Marlon Brando’s innovation of establishing the S emblem as the El family crest has stood the test of time for a reason, providing an explanation for the symbol where there was no satisfying one before. To that end, we might call Mr. Brando one of the essential contributors to the Superman canon. Before 1978, a couple of alternate origins for Superman’s costume were provided. In the Superman daily newspaper comic strips which ran from 1939 to 1966, Superman described his costume early in the run as “constructed of a cloth I invented myself which is immune to the most powerful forces!” At the time, Superman was being pushed as having super-intelligence to match his super-strength, an aspect of the character we rarely see today. So in that case, it was Kal-El who branded himself “Superman.”

However, Silver Age comics which address the suit’s origin, particularly in ADVENTURE COMICS stories of young Superboy in Smallville, cite his mother as the designer of the costume, taking the emblem from the blanket he was swaddled in for his journey to Earth. But you probably didn’t see that in your hardcover collection because, like Brando’s origin in Superman: The Movie, this story originates outside the comics as well: in the pilot episode of 1953’s The Adventures of Superman. In that episode, Sarah Kent* packs the costume in Clark’s bag for protection, as the material is made from the indestructible fibers of that blanket. The symbol itself, though, was afforded no particular meaning until Brando stepped in with his simple solution 25 years later. The final piece of the canon fell into place in 2003’s SUPERMAN: BIRTHRIGHT, where it was first established that the “S” shield wasn’t merely a family emblem, but a message: the Kryptonian character for “Hope.”

*”Wait, Sarah Kent?” I hear you asking. Well, before a letter column response permanently established their names in 1961, Clark Kent’s parents were usually just called “Ma” and “Pa,” if addressed at all. The 1942 novelization The Adventures of Superman gave their names as Sarah and Eben Kent, and those were the names used for the TV series. If you must know. 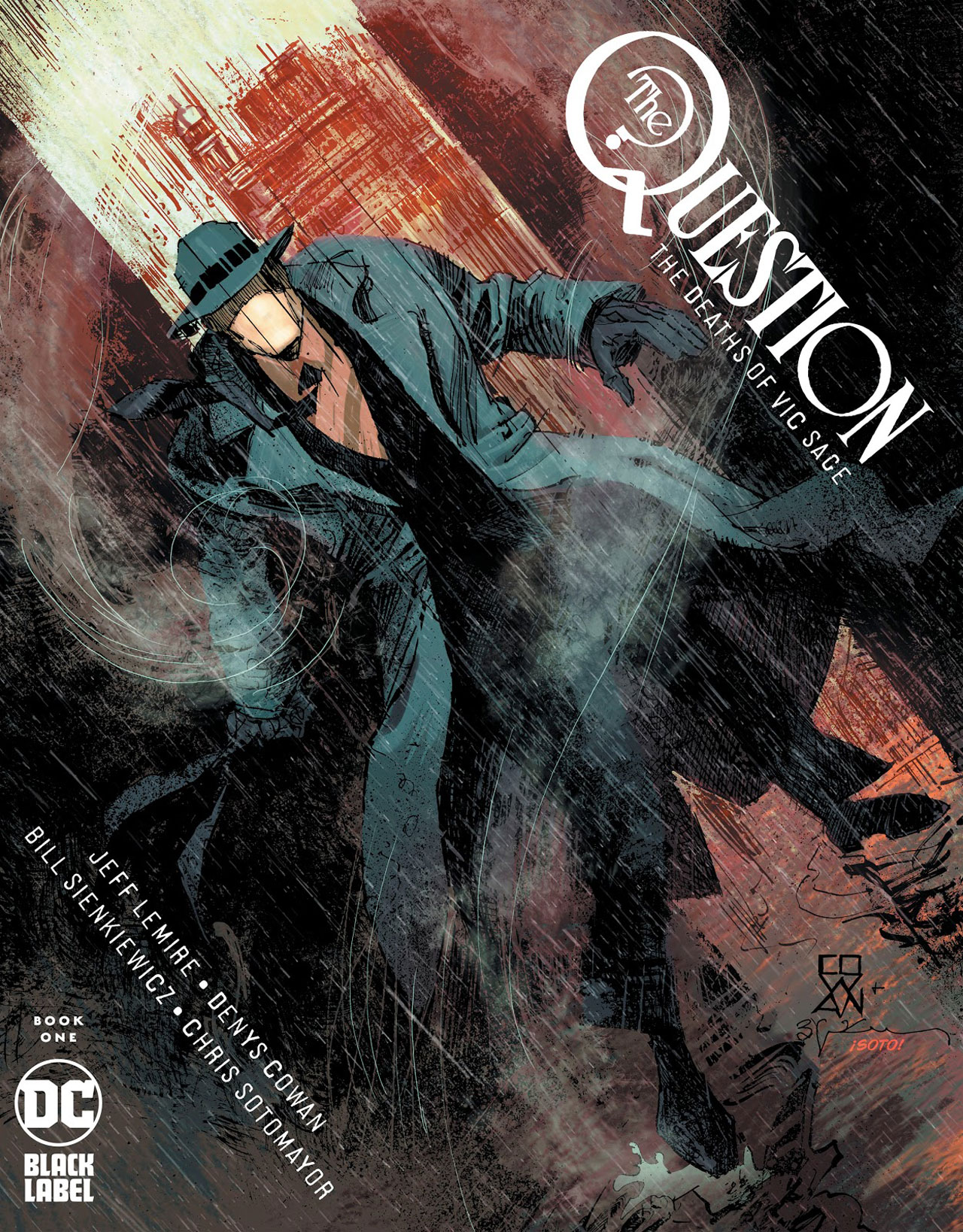 I don’t usually print personal preferences in this feature. But in this case, I have to say: yes, absolutely. Equal parts tribute to the character originally envisioned by Ditko and his rich world developed in writer Denny O’Neil and artist Denys Cowan’s definitive ‘80s series, Black Label’s THE QUESTION: THE DEATHS OF VIC SAGE is a book that keeps producing more questions than answers with every issue. Since Denny drowned him to death in the first issue of his own series, Vic has always been about the cycle of ego death and self-reinvention. DEATHS OF VIC SAGE takes those same themes and runs with them to new dazzling extremes, always presenting more questions along the way. A must read for anyone who loves this faceless madman as much as I do. I believe the final issue, THE DEATHS OF VIC SAGE #4, will be available wherever fine comic books are sold on August 18th. 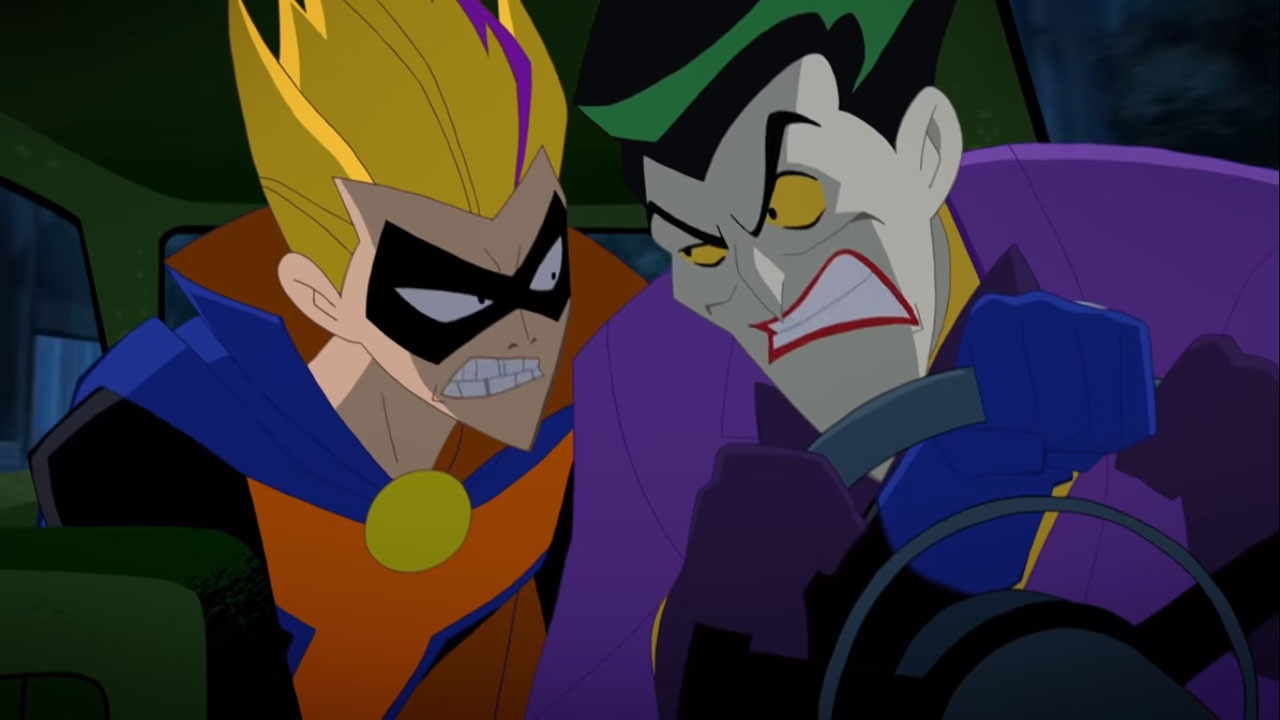 “Have Trickster and Joker ever teamed up?” -TheLastGL

Every rogues' gallery has their cut-up. The gaudy jackanape whose greatest purpose is to make their heroic counterpart feel as foolish as they are. Superman has the Prankster. Or maybe Mr. Mxyzptlk. Wonder Woman has… Circe, I guess? Green Lantern, um, Green Lantern has… look, just take my word for it. Every superhero has a clown that they hate with their fists. The point is that Batman has the Joker, and the Flash has the Trickster.

But as members of entirely different hero-hating clubs, these two occasionally deadly goofballs don’t have much occasion to collaborate -- and as a strict B-Lister, Trickster is generally left off the invite list for top-tier Legion of Doom gatherings. But there has been one occasion where you can catch them together: the 2017 Justice League Action minisode “Missing the Mark.” Featuring Mark Hamill, reprising his role as the Joker from Batman: The Animated Series, and Mark Hamill, reprising his role as the Trickster in 1990’s The Flash, these villains team up in a dastardly plot to abduct… celebrated actor Mark Hamill. I’ll say no more: it’s free to watch on the official DC Kids channel on YouTube, and guaranteed to brighten your day.

That’s all we have time for in this week's column. Please continue to stop by in the Community, where I’ll be handling cases throughout the week and filing others away for future editions. Never feel ashamed for a lack of knowledge; we’re all of us together pursuing a complete truth and understanding of the DC Universe, and all things besides. I myself have learned much researching these cases on your behalf. You’re among friends when you ASK… THE QUESTION.