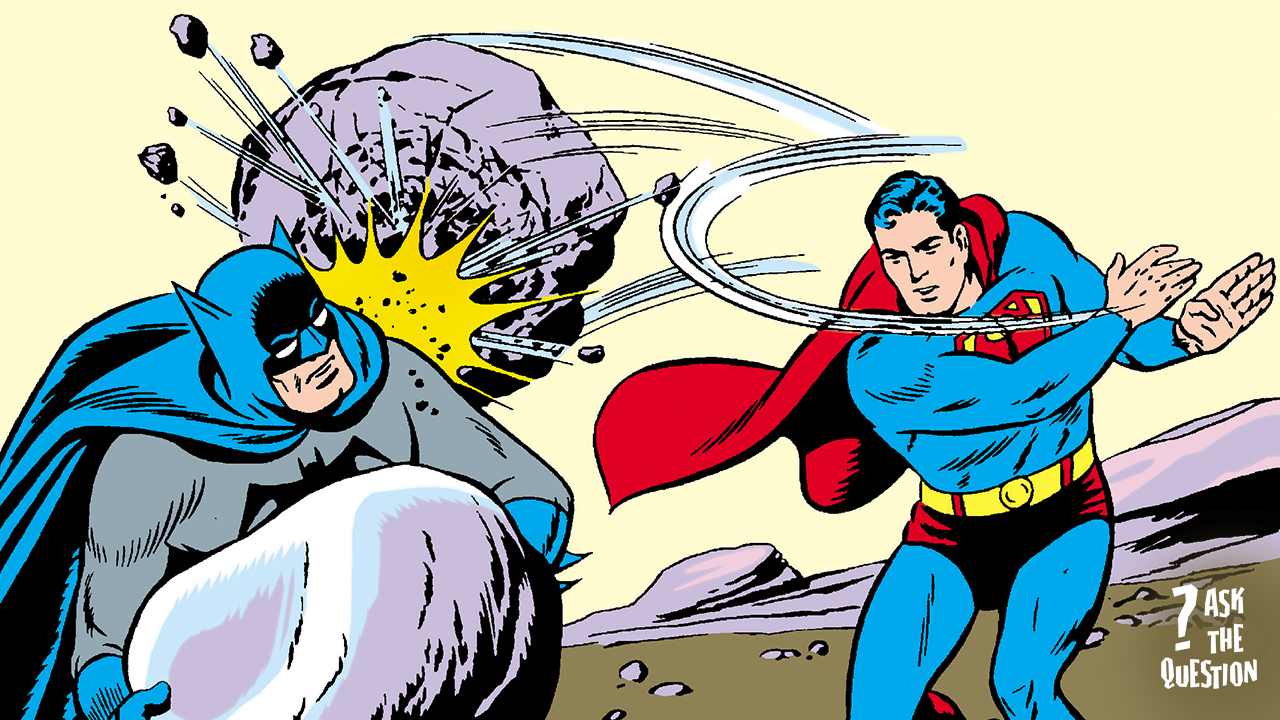 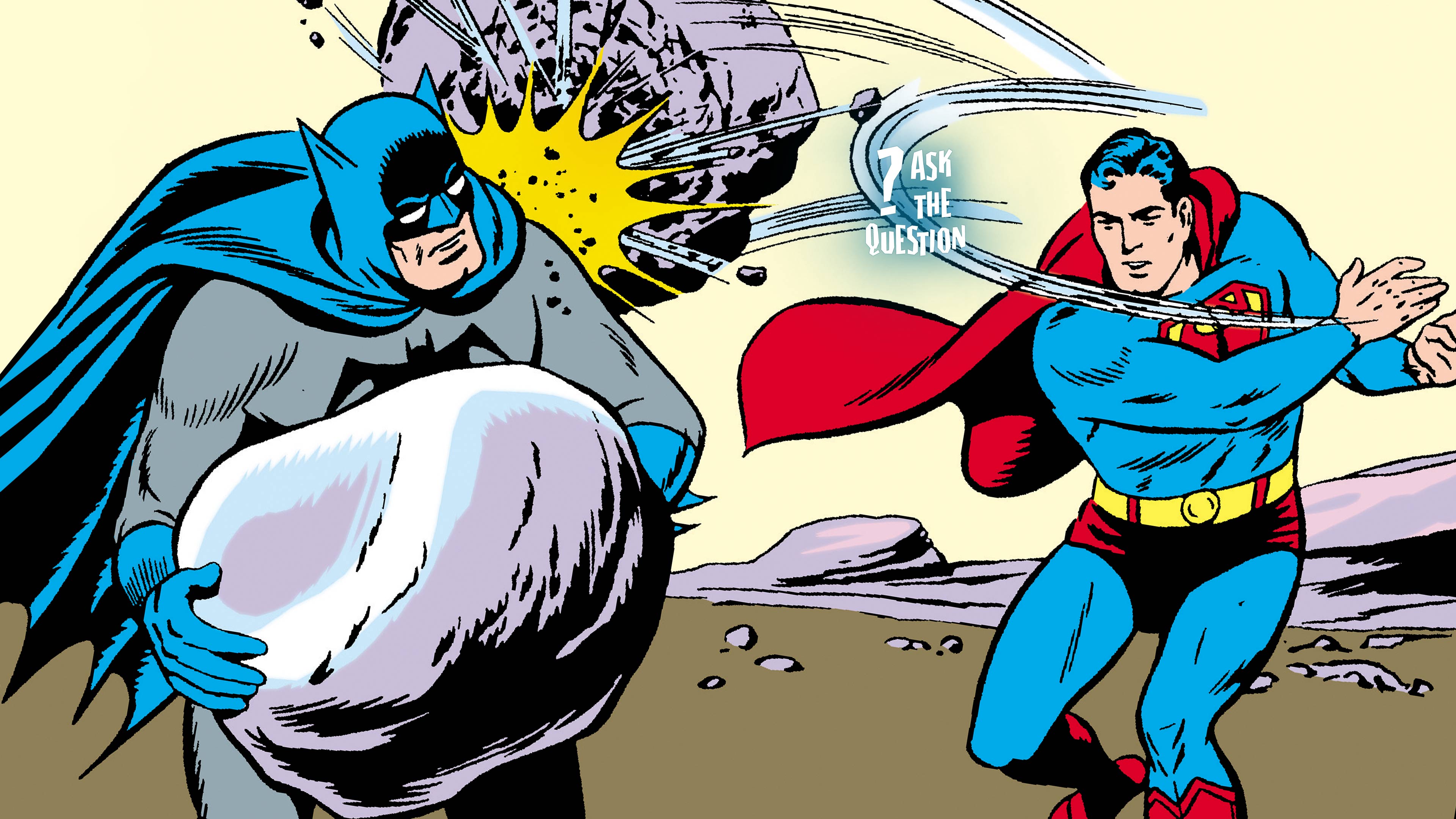 Ask...The Question: When Was the First Batman Vs. Superman Fight?

CLASH OF THE TITANS

“When was the first time Superman and Batman actually fought, whether in earnest or under mind control, red kryptonite, et cetera? Was it really in ‘The Dark Knight Returns,’ or did it come at some point before that?”

‘The Dark Knight Returns’ may be the most well-known battle between Batman and Superman, but it was far from the first. Based on my research, that distinction goes to ‘World’s Finest Comics’ #95 in 1958, in a tale titled “Battle of the Super-Heroes!” On patrol one night with Robin, Batman discovers to have manifested all the powers of Superman. But rather than work alongside the Man of Steel, Batman and Superman come to an inexplicable loggerheads as they compete against one another to save lives, avert disasters, and eventually engage in direct combat.

Through it all, Robin is there to de-escalate each scenario as tempers run red hot -- until a tractor beam takes him to the planet Xlym, where two aliens hassle the Boy Wonder to cut it out and let them fight. The Xlymians disclose that this entire episode was engineered merely to settle a bet: could Batman use Superman’s powers better than Superman himself? And who would win in a fight between the two? In order to solve this, they bombard the two of them with cosmic rays carrying a twofold effect: one which temporarily grants Batman the powers of Superman, and a “Hate Ray” component which drives these two Super Friends to loathe one another.

Surprisingly enough, it’s not Robin who ultimately saves the day, but the aliens’ supervisor. Apparently they’re not supposed to be using the equipment to interfere with other planetary civilizations. The Xlym superior sets everything right off-panel, and one imagines those gambling aliens would regret this escapade come time for performance reviews. 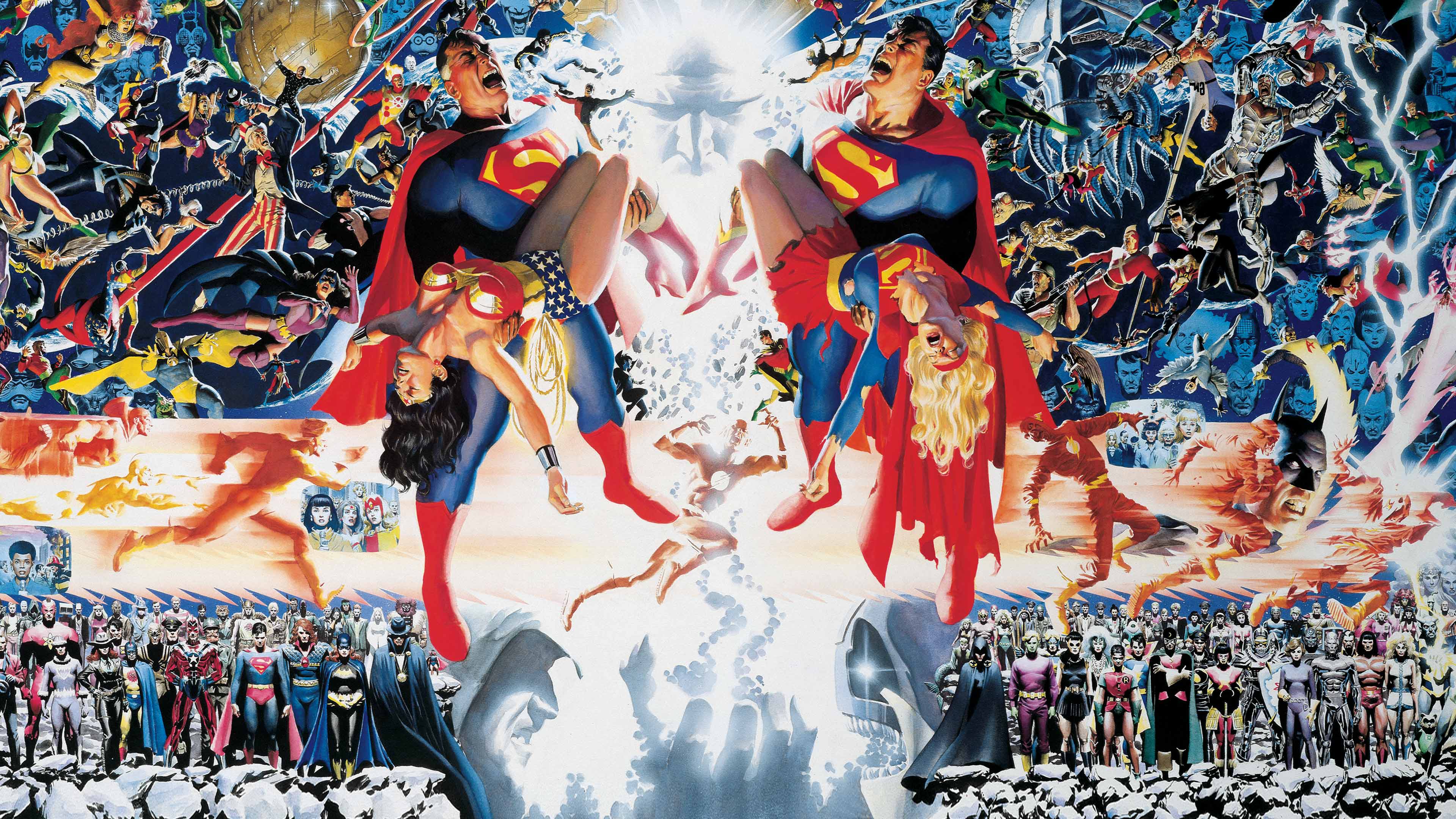 “What are all of the DC Comics eras and their timeframes from oldest to newest?”

That really depends on who you ask. But luckily, you asked me, so you’re going to get the correct answer.

The GOLDEN AGE of DC Comics began in 1938, with the publication of ‘Action Comics’ #1. National Allied Publications -- the publisher which would become DC -- had been printing comics since 1935, but it wasn’t until ‘Action’ that the company found its identity. (Very early comics published prior to this date are sometimes referred to by collectors as “Platinum Age,” but this is non-standard nomenclature.)

In 1954, the Comics Code Authority was established in response to a national concern over the content of comic books and how they may seduce innocent young minds. This board would only award its seal of approval if the book met its rigorous standards for content moderation, and all major publishers felt pressure to adopt it. The comic-book landscape was radically changed as practically every title on the market was forced to reconsider their practices, and so ended the Golden Age of comics.

The start of DC’s SILVER AGE began in 1956, and can be attributed to editor Julius Schwartz. Schwartz oversaw updated reinterpretations of DC’s second-string heroes for the mid-century, beginning with the debut of a new Flash in ‘Showcase’ #4, taking advantage of a science-fiction zeitgeist to update their stable accordingly. Schwartz and ‘Showcase’ would give similar space-age treatment to Green Lantern, Aquaman, the Atom, and Hawkman.

In 1961, a line between these two ages was clearly drawn in ‘The Flash’ #123, when Barry Allen meets Jay Garrick for the first time — establishing the earlier adventures of the Golden Age as having taken place on a separate Earth.

The term “Silver Age” actually first came into usage through the letter columns in 1960s issues of ‘Justice League of America.’ It was common fan practice at the time to refer to the pre-Comics Code era as the “Golden Age.” In 1966, JLA reader Scott Taylor of Westport, CT made a mirthful suggestion: that if we insist on referring to to DC’s bygone years as the “Golden Age,” then it won’t be long before future generations refer to their own comics as the “Silver Sixties.”

The BRONZE AGE began in 1970, though it wasn’t recognized as such until the year after. In 1970, Denny O’Neil and Neal Adams took over writing and art duties with ‘Green Lantern’ #76, retitling the series ‘Green Lantern/Green Arrow.’ Within the bounds of the Comics Code Authority, O’Neil and Adams used their stars to explore the true evils facing America, such as pollution, poverty, and racial inequality. In 1971, the Comics Code Authority relaxed its standards significantly by allowing depictions of mature content in comic books as long as they were portrayed negatively. This new room for expression affected all of DC’s titles, but perhaps none more so than ‘Green Lantern/Green Arrow’ as they tackled heroin addiction in the landmark issue #85, “Snowbirds Don’t Fly.” With that publication, the beginning of O’Neal and Adams’ run has since retroactively been considered by many fans as the start of the Bronze Age proper.

The so-called “MODERN AGE” began in 1986, with the conclusion of the continuity-crunching ‘Crisis on Infinite Earths.’ Since the '80s are far from modern by today’s standards, this era is also referred to as “POST-CRISIS” or “PRE-FLASHPOINT,” depending on whether you prefer to look backward or forward.

This period of time is also sometimes demarcated into two sub-eras: “Pre-Zero Hour” and “Post-Zero Hour.” The ‘Zero Hour: Crisis in Time’ event of 1994 provided a sort of soft patch to DC continuity, carefully pruning the timeline for a more cohesive history of the DC Universe. This is a really big deal if you’re into the Legion of Super-Heroes, but it otherwise left ongoing storylines more or less intact.

There were a couple of minor continuity bumps after this, but not enough to necessarily demarcate a new era. Superboy-Prime provides a redraft for some origin stories in 2006’s ‘Infinite Crisis,’ and the Milestone Universe was integrated into DC canon after ‘Final Crisis’ in 2009. And in early 2011, DC finally dropped its partnership with the Comics Code Authority in favor of its own internal age rating system by title. Apart from that, the so-called ‘Modern Age’ continued apace.

But everything changed with ‘Flashpoint’ in 2011. After a drastic alteration of the timeline, every DC Comic was reset to issue #1 for THE NEW 52, an era named for its 52 debut titles. Entirely new takes are presented for many of DC’s most traditional heroes and settings, providing the new status quo for years to come.

After 2015’s ‘Convergence’ established that EVERY version of continuity still exists somewhere out in the vast multiverse, the DCYOU initiative presented a new direction for many existing books and the launch of many others in the waning months of this era.

That brings us to REBIRTH, which began in 2016 with the publication of ‘DC Universe: Rebirth’ #1. The return of Pre-Flashpoint Wally West heralds the re-establishment of many lost elements of Post-Crisis lore as they gradually reintegrate with (or in some cases, replace) the New 52 versions of each story and character.

Last year, in 2018, the "Rebirth" banner was dropped from DC's ongoing titles in favor of a more general "DC Universe" branding. Beginning with the 'No Justice' miniseries, writer Scott Snyder has branded this age as 'New Justice,' with an emphasis on a greater level of interaction between members of the DC Super Hero community. No further mass continuity change has occurred, however, so we can still pragmatically consider ourselves to be in the REBIRTH era.

And so, to summarize:

As for our own timeline, this is the point in our shared continuity where I bid you farewell. But I’ll be back next week, just as long as you keep showing up to ASK...THE QUESTION.