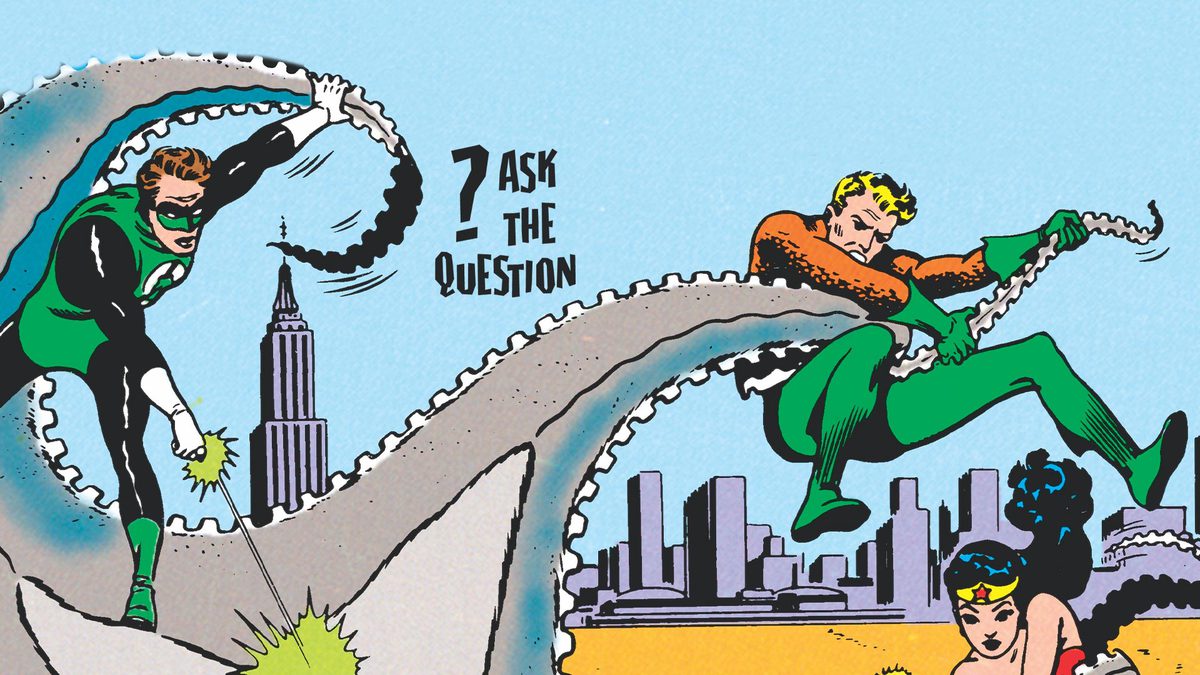 THE BRAVE AND THE OLD 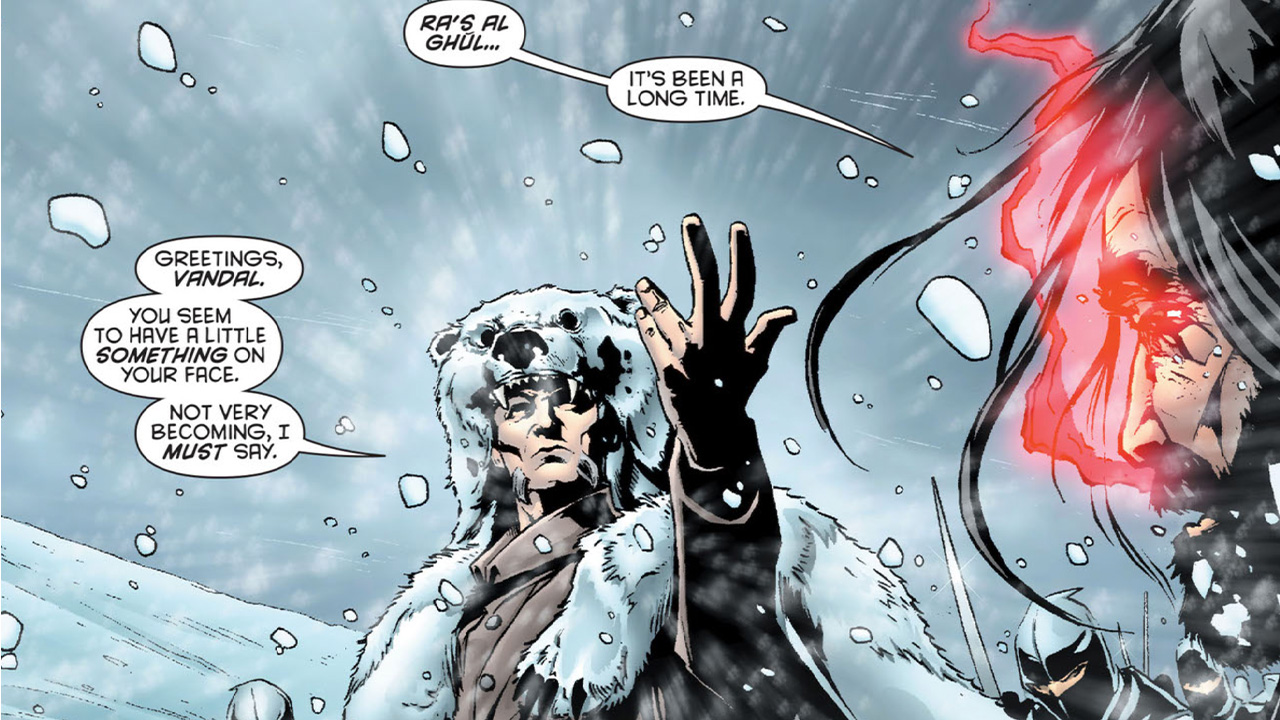 “Have Vandal Savage and Ra’s al Ghul ever teamed up? Because that would be both frighteningly awesome and awesomely frightening.”

The convergence of these two immortal titans and their machinations at shaping the world’s destiny should by all rights be a monumental event. Such an encounter has taken place, at least once. And as it occurred in the aftermath of Final Crisis, Batman wasn’t even around to do anything about it. So who rises to the challenge when the League of Assassins and Savage’s ancient Blood Tribe threaten to overturn the world order? Would you believe… Alfred Pennyworth? Witness the whole sordid affair for yourself in 2009’s Outsiders: "The Deep.” 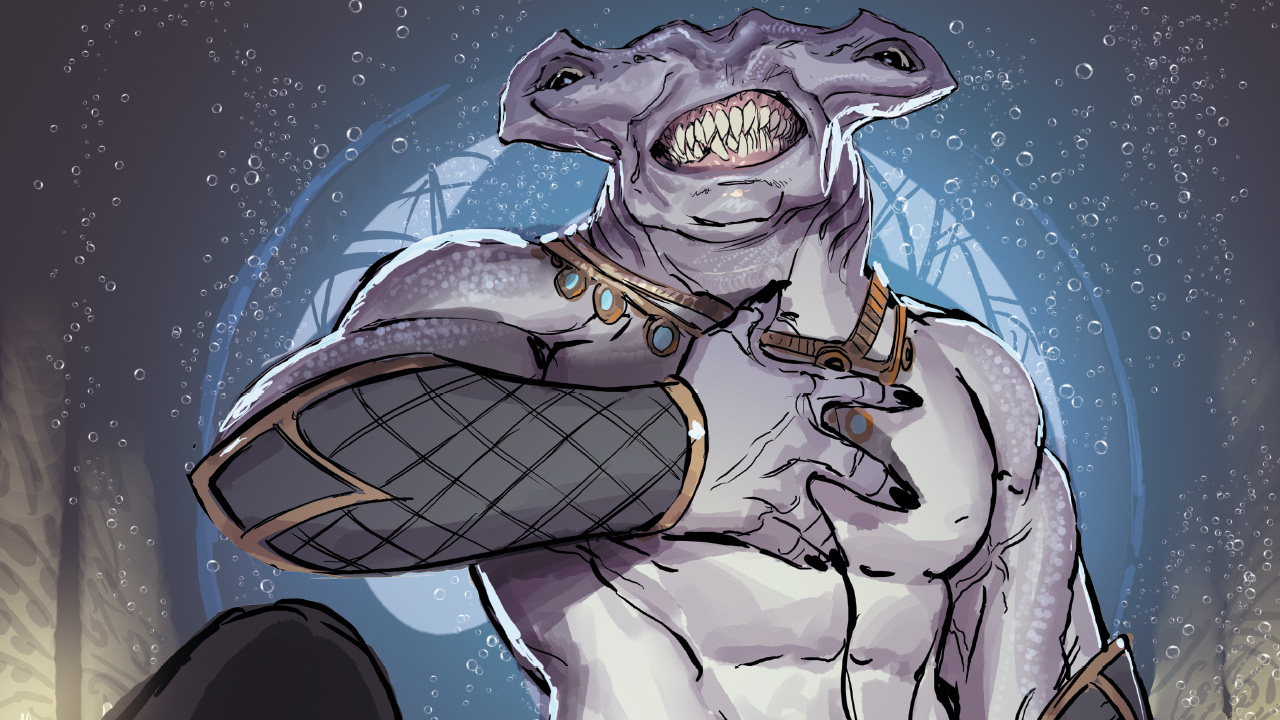 In the DC Universe, King Shark’s origin is considered a mystery. Some consider him part of an Atlantean sub-race. Others say he’s a man who mutated shark-like qualities, much like Gotham’s Killer Croc. Others suppose that he’s an early example of Earth’s animal life evolving human traits and intelligence, as later seen in the future of Kamandi. But King Shark’s true nature is in fact more mystical than any of these.

Ancient Hawaiian legends tell of a Shark-God named Kamohoalii, who has kept the seafaring Hawaiian people in check for countless generations, placing within them a canny fear of the unknown waters which surround them. But one day, as gods of ancient lore often do, this Shark-God fell in love with a mortal, human woman — a young woman from Waipio Valley named Kalei. And from their union, a child was born: a demigod who was named “Nanaue,” the Shark Man. Straddling the worlds of sea and man, Nanaue became a terror amongst both his peoples, and came to be known as the King of All Sharks.

This story was first alluded to in 1994’s Superboy #9… but it’s actually far, far older, dating back to an actual legend from Hawaiian mythology. Seems like Greek gods weren’t the only ones who made it into the DC Universe. 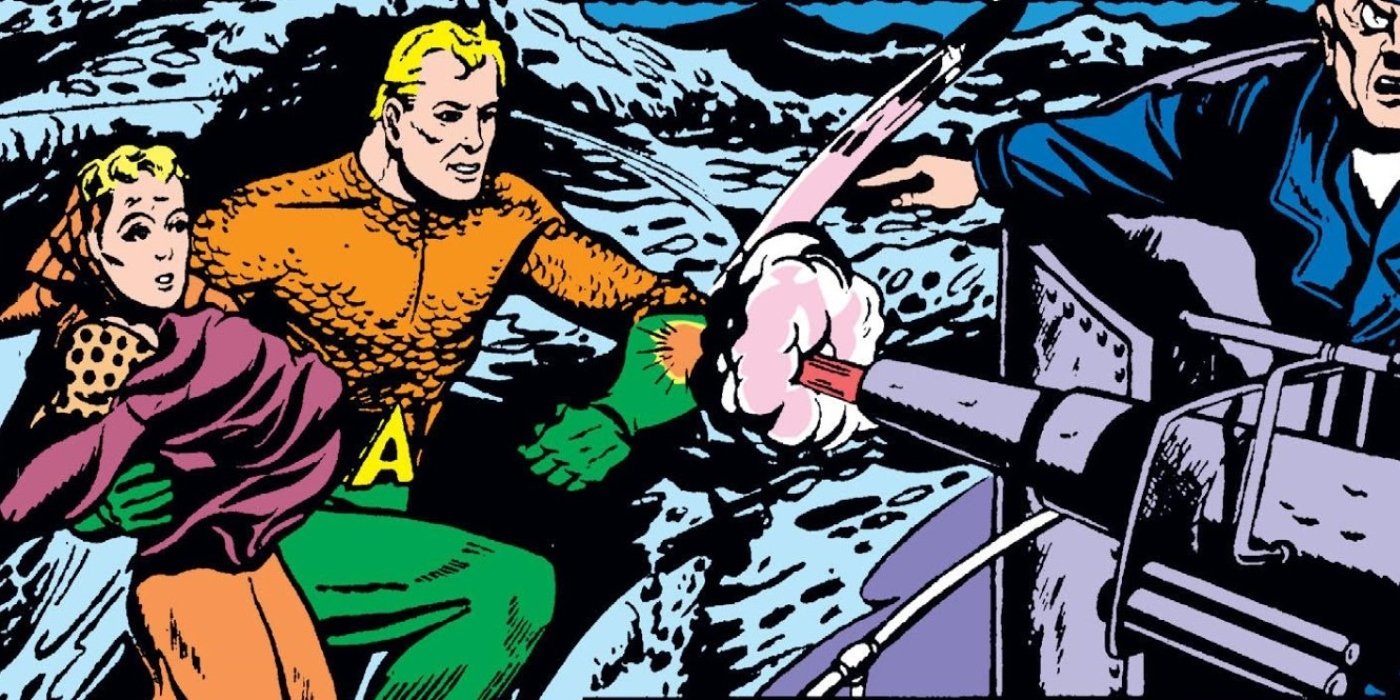 “When was Aquaman’s first cover appearance? Is there a reason he got such a big push so late in the game?”

Aquaman’s first cover appearance was in the arms of Starro the Conqueror, in 1960’s The Brave and the Bold #28 — the first assembly of the Justice League of America, and nearly 20 years after his debut in 1941’s More Fun Comics #73. Through the early decades of DC publication, nearly every title was an anthology publication, made up of short comic stories which rarely if ever spanned the entire contents of the interior from start to finish. In these anthologies which featured a wide variety of characters, it was usually the most popular “lead” character who graced the cover. In Aquaman’s initial run with More Fun Comics, this honor usually belonged to Green Arrow and Speedy. When he later transitioned to Adventure Comics, it was young Superboy who took the lead.

When DC was putting together their “Justice League” concept to try out in the pages of Brave and the Bold, they followed somewhat in the initial tradition of the Justice Society of America before them: the roster would be filled with established heroes who didn’t necessarily have their own popular titles, in the hopes of raising their visibility. With 20 years of backup stories behind him, Aquaman was an obvious choice for the super-group whose stories would fill the entire run of a magazine. Sure enough, the Justice League of America concept proved itself out, and launched as its own title later that year — with Aquaman as a charter member. It was two years later that Aquaman, now seen monthly hobnobbing with the likes of Superman, Batman, and Wonder Woman, was finally given his shot at a monthly solo title. 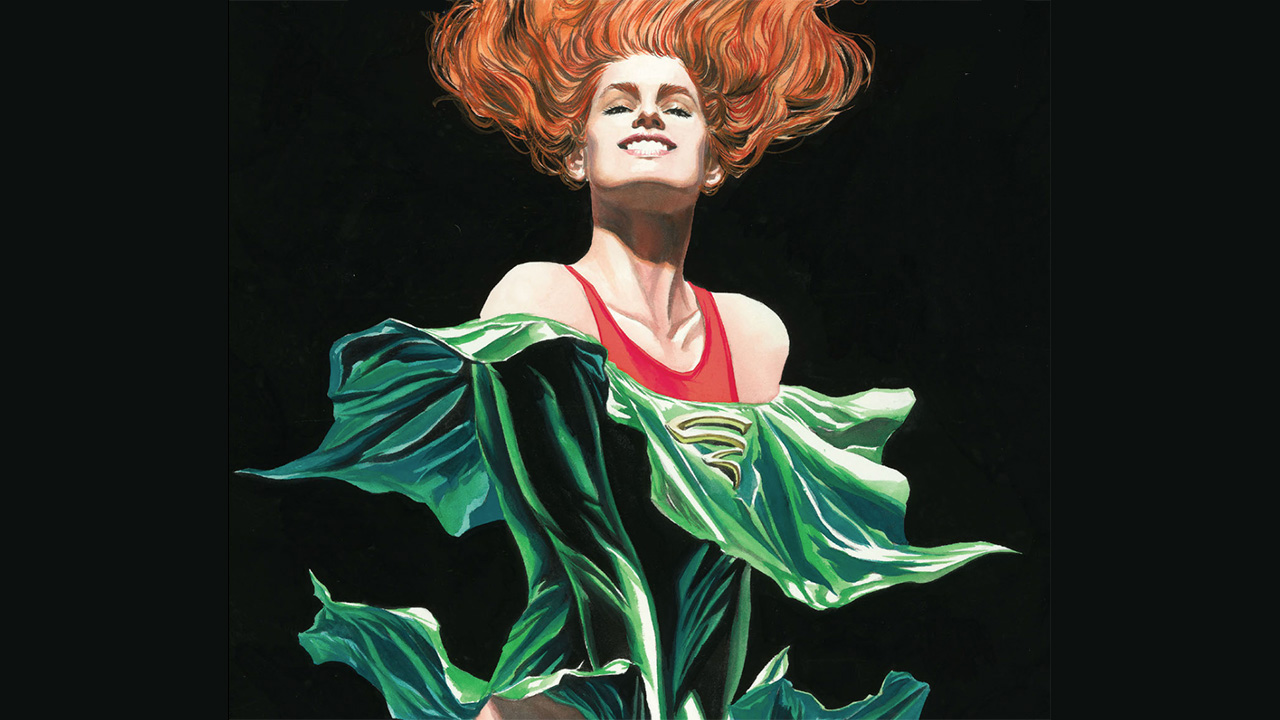 “What’s the deal with the JSA’s Cyclone, and how is she related to Ma Hunkel, the original Red Tornado?”

Like many of the characters and concepts introduced in Geoff Johns’ 2006 run on Justice Society of America, Cyclone was actually inspired by a minor detail in the rich world of Mark Waid and Alex Ross’s Kingdom Come: a momentary appearance of a lively, red-headed human woman who had assumed the mantle of Red Tornado. Geoff decided to develop her story further for his run on JSA, giving her a proper origin and introducing her as a legacy character to both of the Red Tornadoes which preceded her.

According to Johns, Cyclone was born as Maxine Hunkel — granddaughter of Ma Hunkel, the Golden Age Red Tornado. When she was only six years old, Maxine was abducted by the evil Professor T.O. Morrow, creator of the robotic Red Tornado of the Silver and Modern Ages, and infected with nanomachines which would grant her the power to control air and wind currents.

As Maxine matured into her powers and took on the name Cyclone, she earned a spot with the JSA All-Stars, the next generation of the Justice Society which was formed to train the heroes of tomorrow. Maxine was known by her peers and fans as exceptionally bright, highly sociable, and for her deep obsession with The Wizard of Oz.

Like most members of the JSA, Cyclone disappeared without a trace after 2011’s Flashpoint. But in last year’s finale of Doomsday Clock, Cyclone was one of many lost characters who finally re-emerged to their rightful place in the DC Universe. There’s no place like home. 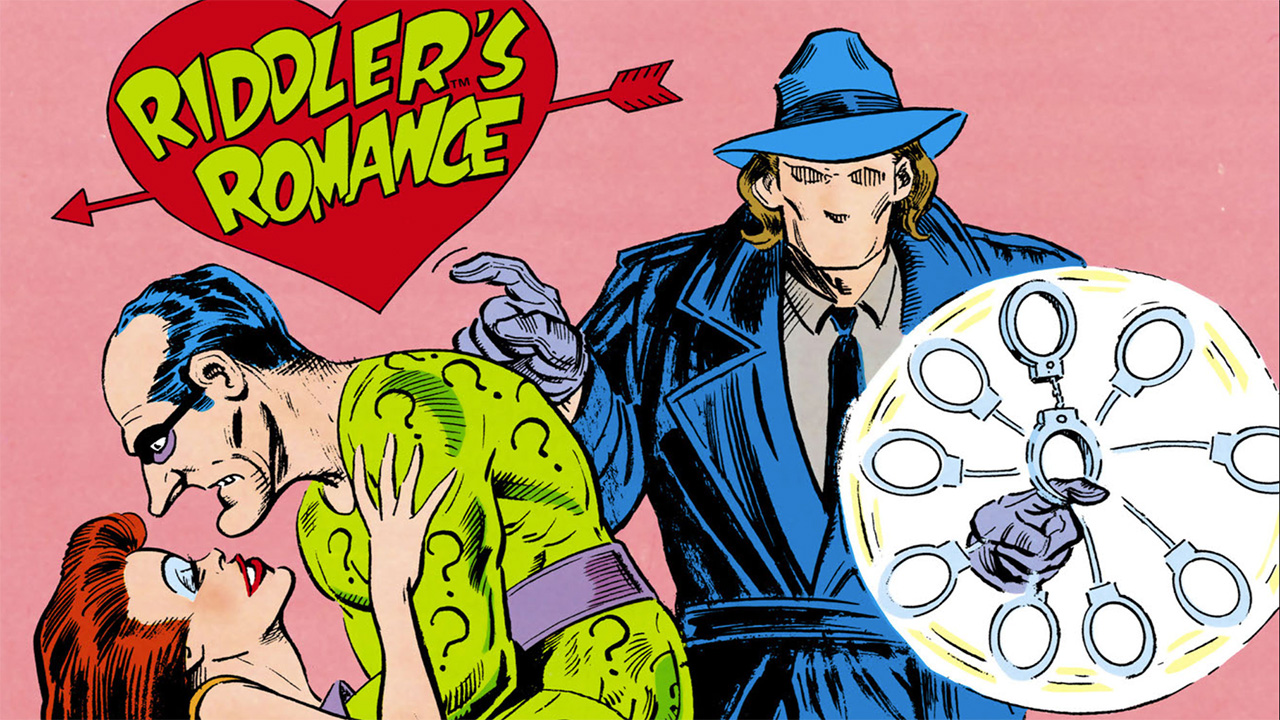 “Alright, Mr. Q, I got a few questions for yah. But they’re within your greatest realm of expertise. Riddle me this. When have the Riddler and the Question ever gone up against each other? Who is better? And what are your thoughts on Montoya as The Question?”

I’ll take these all in succession:

First, The Question has faced (or, no-faced) The Riddler on two occasions to date. The first was in 1989’s The Question #26, when Charlie runs out of gas and has to take a city bus — one which happens to be the subject of a hijacking by a very washed up Riddler who has seen better days. The Question untangles the situation by philosophically demolishing him before he throws a single punch. It’s almost kind of sad. The second occasion was in the quite excellent, highly underrated 2018 animated film Scooby-Doo! & Batman: The Brave and the Bold. I highly recommend seeking it out, especially if you’re a fan of the original Brave and the Bold TV series. (And why wouldn’t you be?)

Second: The Question is a pilgrim on the quest for the truth behind all things, and who constantly reinvents himself in his pursuit for meaning. The Riddler is a gimmicky masochist who primarily concerns himself with finding new and inventive ways for Batman to dominate him. Answer: The Question.

Third: I love Renee! She brings a terrific new dimension to the mantle, and is always at her best when she plays the cynical but loyal Sancho Panza to Charlie’s wild, idealistic Don Quixote. She’s an excellent and worthy bearer of the Question legacy, but I personally believe that the two Questions work best as partners in crime fighting.

And that’s all the time we have this week! Thank you all for your submissions. I’m always encouraged by your curiosity, and will always do my level best to indulge it. Please continue to write in, and I’ll keep showing up to address your inquiries. All you have to do is ASK… THE QUESTION.