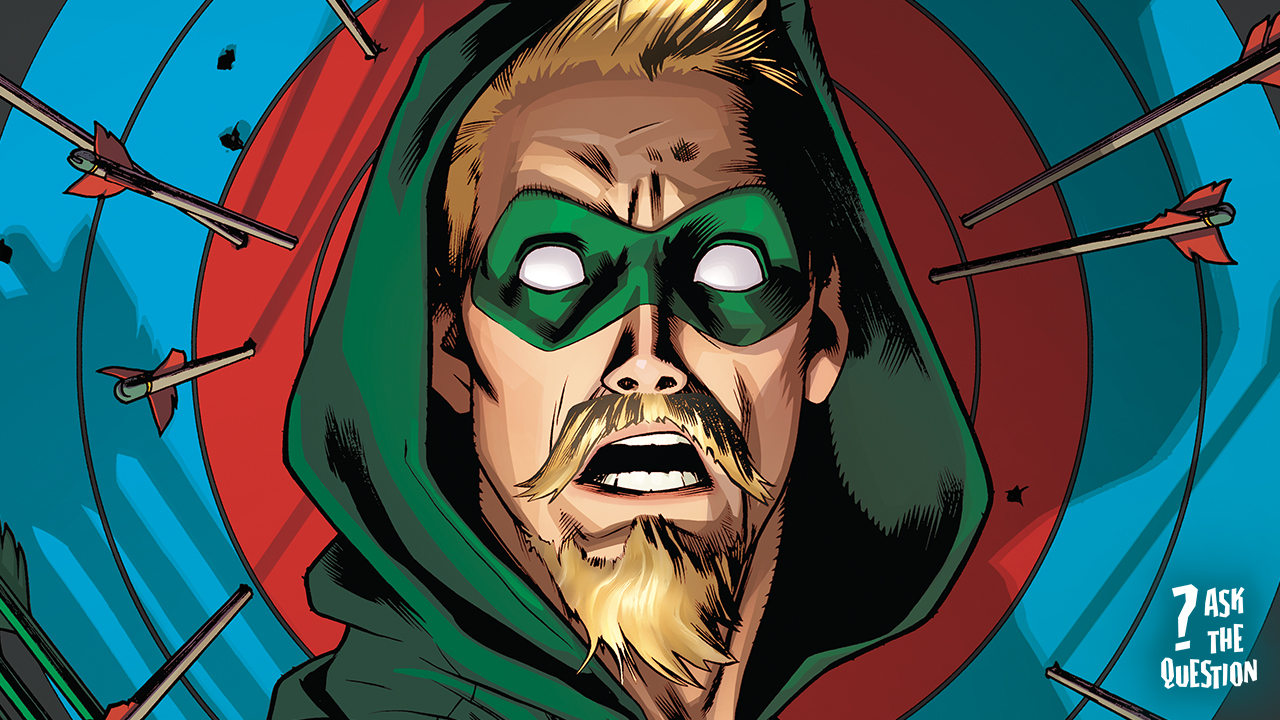 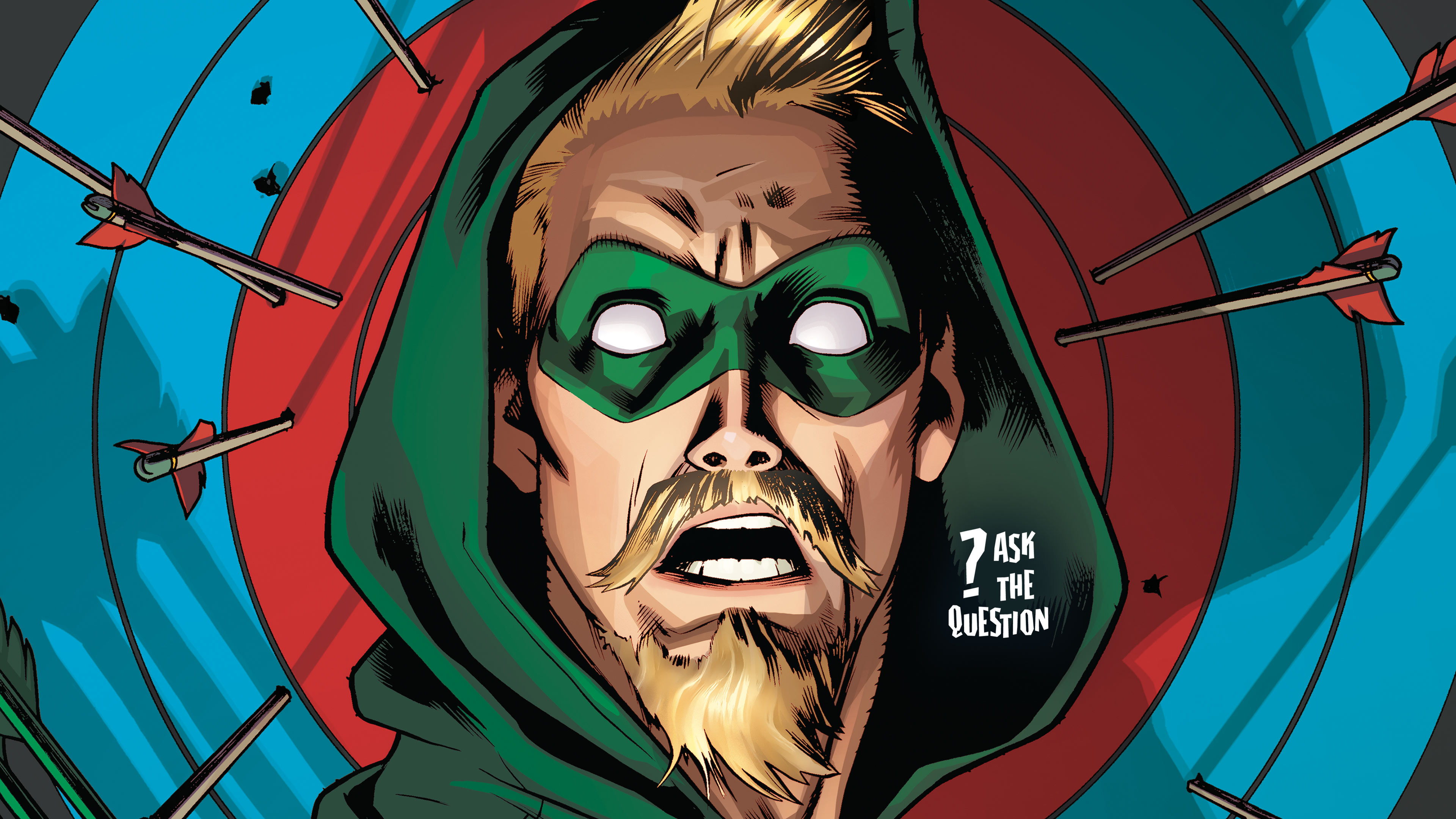 Ask...The Question: When Did Green Arrow Grow His Goatee? 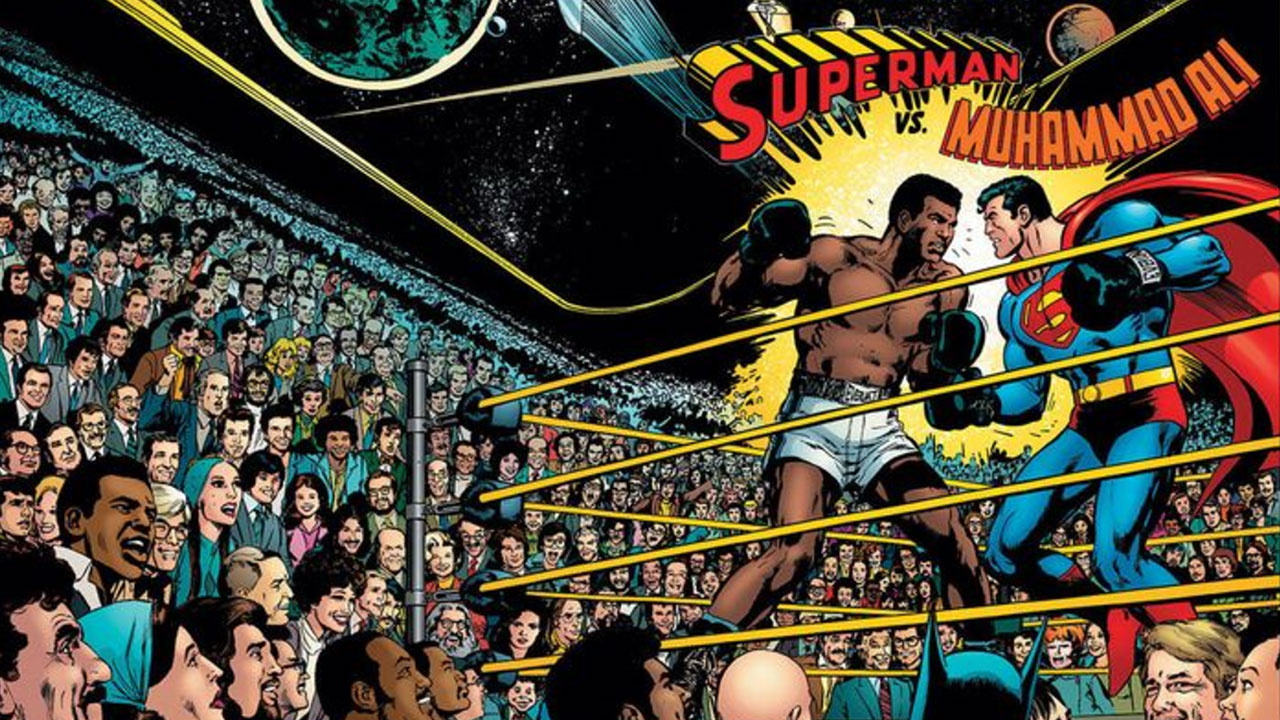 “When was the first time a DC character crossed over with a real-life celebrity (like in Superman vs. Muhammad Ali)?”

The battle of Superman and Muhammad Ali as told in 1978’s ‘All-New Collector’s Edition’ #C-56 is certainly the most renowned celebrity appearance in DC’s history, but it is by no means the first.

But to answer this question, we have to ask a different one: what *is* a “celebrity?” Is it any public figure known in the real world? Is, say, Napoleon a celebrity? Is Cleopatra, or Julius Caesar?

If historical figures are on the table, then the earliest crossover between a DC character and a figure from the real world would go all the way back to ‘New Fun Comics’ #2, DC’s second publication ever in 1935. One regular feature in ‘New Fun Comics’ was ‘The Magic Crystal of History,’ where siblings Bobby and Binks would use their magic crystal to travel through time and meet the great icons of ages past. With the aid of their crystal, Bobby and Binks met such figures as Archimedes, Guy Fawkes, and Peter the Great — but the first person to cross their path was Khufu, ruler of Ancient Egypt in the 26th century BC. Later comics would retcon this very Pharaoh to be an early incarnation of Hawkman himself, making him both a real-life celebrity AND a DC character.

But perhaps you’d prefer to draw a line between historical figures and “celebrities.” Take your example of Muhammad Ali. Ali was quite alive and well when ‘Superman vs. Muhammad Ali’ was first published. Perhaps to qualify as a celebrity appearance, the celebrity in question must be living at the time of the comic’s publication. In that case, the answer may be 1936’s ‘New Comics’ #4, in the debut appearance of future Superman creators Jerry Siegel and Joe Shuster’s “Federal Men” — a group of federal agents led by the intrepid Steve Carson on behalf of President Franklin Delano Roosevelt himself, who appears in the comic to give them their orders.

But is a political leader really a celebrity, or a different class of public figure entirely? Maybe to qualify as a “celebrity” in the same respect as Muhammad Ali, one would have to gain their popularity through the field of entertainment — be it a creative medium such as film, or the competitive sporting world.

If that’s the case, then the answer you seek can be found in ‘New York World’s Fair Comics’ #2, a very special promotional comic released to commemorate the 1940 World’s Fair in New York City. This anthology publication features stories of Superman, Batman and Robin, Slam Bradley, Sandman, and more all enjoying the amenities of the World’s Fair as they protect it from potential outside threats.

But most significant to us, here, is the story of “Zatara at the World’s Fair.” In this tale, the magician we now know better as Zatanna’s father enjoys (and ultimately takes part in) an exhibition featuring none other than Buster Crabbe, “one of the greatest mermen of all times!”

“Who?” I hear you asking. And shame on you for doing so. Buster Crabbe may not be a household name in the 21st century, but in the 1940s he was every inch a celebrity. Buster Crabbe was not only an Olympic gold medalist swimmer, but also one of the most recognizable faces of the film serial era. To this day, Buster Crabbe remains the only person in history to have played Tarzan, Buck Rogers, and Flash Gordon in his career - all three of which were as big then as Batman and Superman are today. So show some respect!

GRIN AND BEARD IT 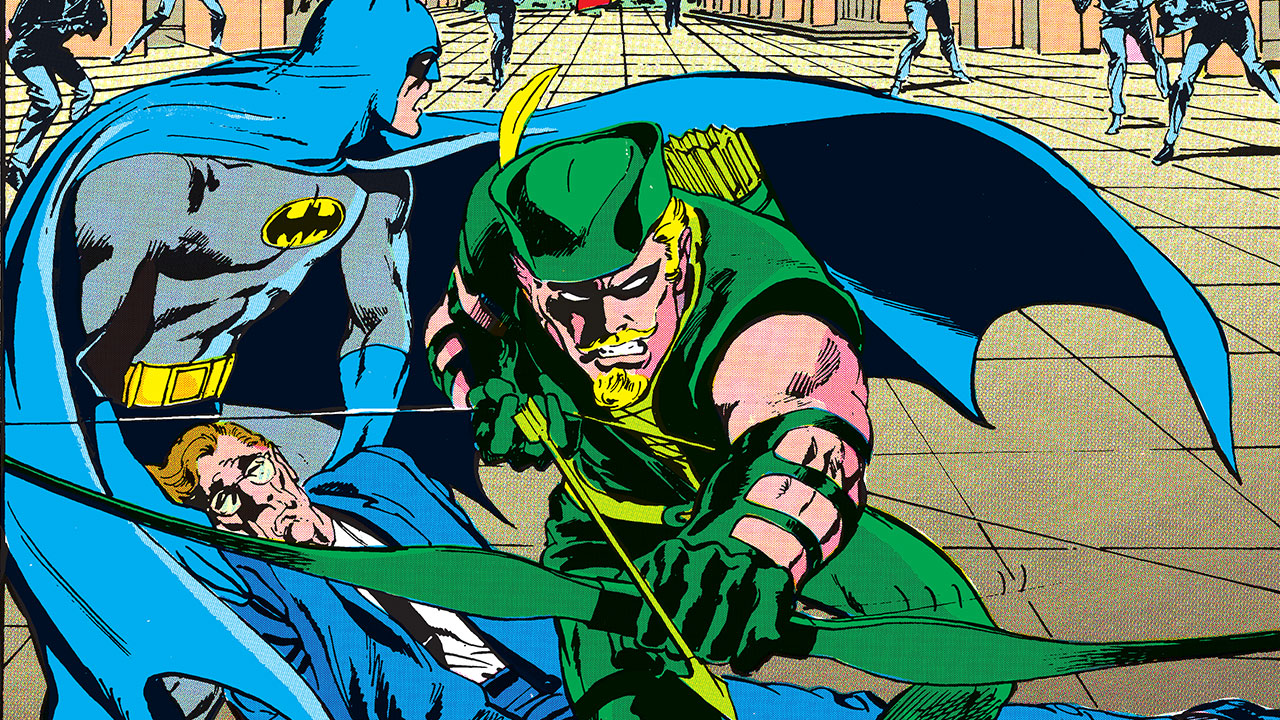 “When was Oliver Queen/Green Arrow first shown with a beard?”

Green Arrow’s signature beard is commonly associated with DC’s Bronze Age of Comics, and for good reason: it was the shocked, bearded face of Green Arrow on the cover of 1971’s ‘Green Lantern/Green Arrow’ #85 discovering his ward Roy Harper shooting up heroin that ushered in a new era of storytelling tackling more mature themes.

But as a matter of fact, it was two years earlier, in 1969’s ‘The Brave and the Bold’ #85, that Oliver Queen first grew out the facial hair we’ve all come to associate with the battling bowman. Clean-shaven since his debut in 1941’s ‘More Fun Comics’ #73, Green Arrow had earned an ill reputation through the Golden and Silver Ages of being little more than a second-rate Batman, with his Arrow Cave and his Arrow Car, affluent alter ego, and a young ward to match. For ‘The Brave and the Bold’ #85, writer Bob Haney and artist Neal Adams took on a particularly weighty question: “What’s the difference between Green Arrow and Batman?”

The best way to answer this question, Haney felt, was to put Batman and Green Arrow in the same room. In this story, entitled “The Senator’s Been Shot!”, Batman and Green Arrow find themselves pursuing the same murder mystery. In the process, their crime fighting process and personal philosophies conflict with one another in particularly interesting ways — and even ended with a reversal of fortune which widened the gap further still, by forcing millionaire playboy Oliver Queen into bankruptcy.

To complete the transformation, Neal Adams drew that distinctive blonde mustache and goatee we all associate with the character to this day... an artistic flourish which shortly thereafter earned him the gig on ‘Green Lantern/Green Arrow’ with Denny O’Neil. 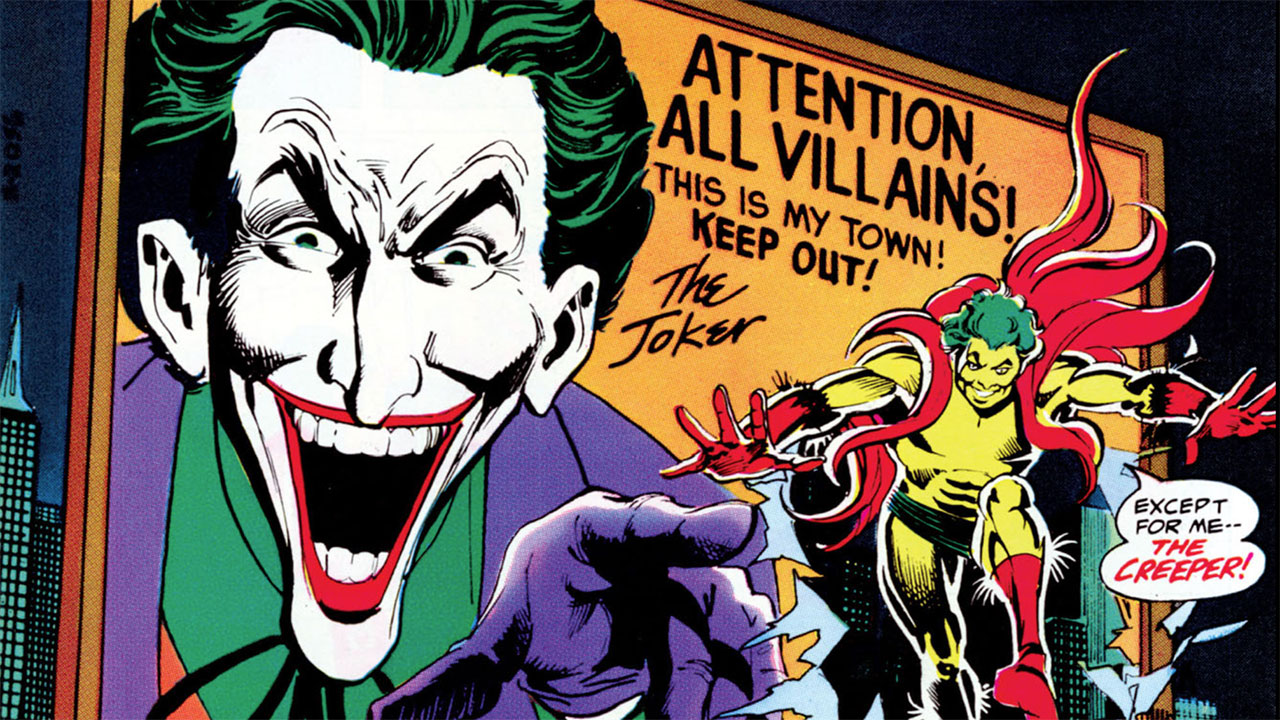 “Hi Question, The Creeper is one of my favorite DC characters, since watching the ‘Beware The Creeper’ episode of ‘The New Batman Adventures.’ Was he really based on The Joker when he first appeared in the comics?”

It’s true that “Beware The Creeper” introduced Steve Ditko’s “Yellow-Skinned Wacky Man” into the DC Animated Universe through the same chemical accident which gave the world The Joker. In the comics, however, The Creeper’s path didn’t intersect with The Clown Prince of Crime’s until 1975’s ‘The Joker’ #3, 7 whole years after The Creeper’s debut in 1968.

It’s also true that there are some similarities to the Red Hood origin story for The Joker as told by Bill Finger in 1950’s ‘Detective Comics’ #168, and Steve Ditko’s origin of The Creeper in ‘Showcase’ #73. Like the Red Hood, The Creeper wore an outlandish costume on the night of his transformation. Like the Red Hood, there was a chemical component to his metamorphosis. But where the Red Hood fell into a vat which should have killed him, but left him transformed, The Creeper’s life was saved by an injectable serum which altered his appearance and psyche as an unforeseen side effect. And their colorful appearances and chaotic approaches to crime and crime-fighting certainly invoke comparison.

However: I would argue that the greatest influence on Ditko’s creation of The Creeper as a character was not The Joker at all, but an earlier creation of Ditko’s own making. Throughout his long and illustrious career across multiple major comic book publishers, Ditko was known for his constant reiteration, reinterpretation, and renovation of his own old ides, forever expounding upon and mutating them into strange and fascinating shapes. Sometimes he would follow a character’s ethos and operation to their extreme conclusion; others, that character’s extreme opposite, defining the original further through contrast. In the case of the Creeper, I would make the argument that he wouldn’t exist without another Ditko hero created one year prior: The Question.

Like The Question’s alter ego Vic Sage, The Creeper’s Jack Ryder was a television news reporter who would stop at nothing to get his story. But where The Question’s original objectivist leanings dictated an impenetrably rigid moral code, The Creeper achieved the same results by throwing logic, caution, and all common sense to the wind. One could imagine The Question and The Creeper as opposite hemispheres of the same brain: order and chaos. Logic and creativity. Famously reclusive, Ditko didn’t like to talk much about his creations, so we’ll never have the absolute truth of it. But absolute truth only makes a difference to The Question. Rampant speculation, on the other hand, would suit The Creeper just fine.

And for matters of absolute truth OR rampant speculation, yours truly can be both Sage and Ryder at a moment’s notice, for whatever approach best suits the needs of my inquisitive readers. Just approach me in the Community and see which one you get when you ASK… THE QUESTION.