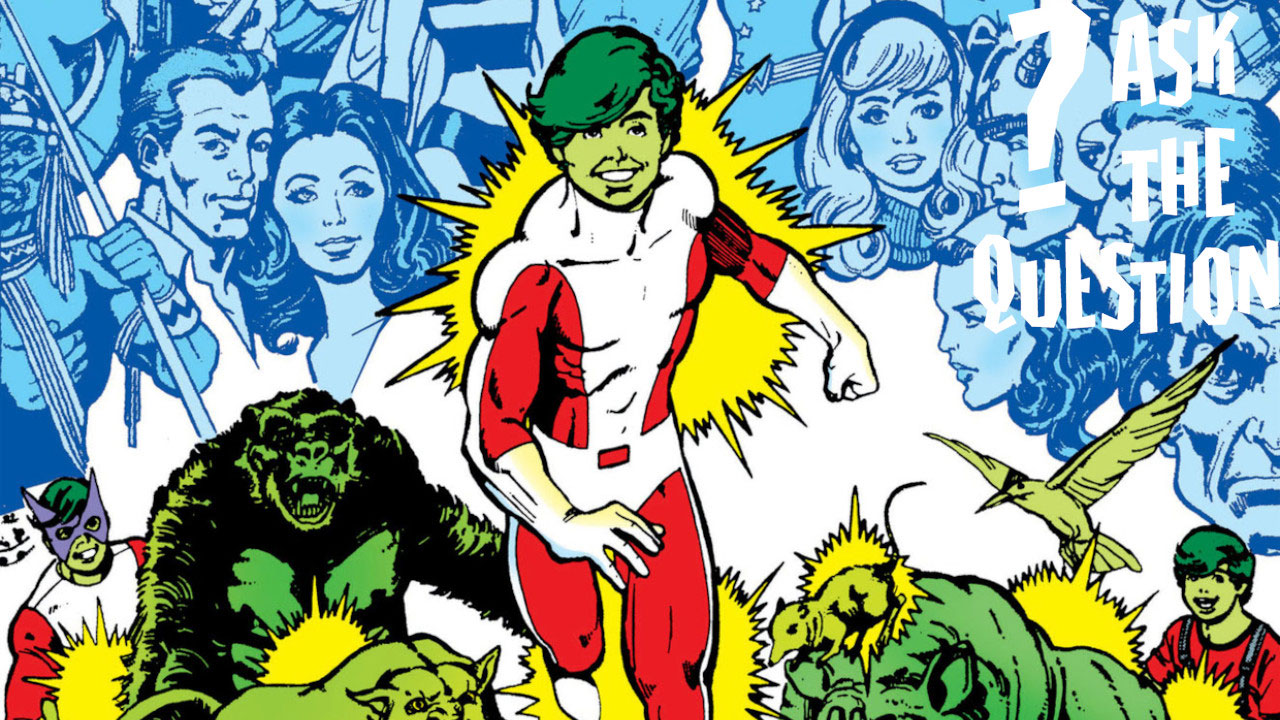 Hello. I’m Alex Jaffe, better known in our Community as HubCityQuestion. My personal mission: to take on any question you have about the DC Universe -- no matter how strange, granular, or obscure -- and present you with an answer. As a faithful steward of the truth, I offer my time in this weekly column to address these inquiries. If you’d like to submit one of your own, you can stop by my office at any time in our Community to state your case, each of which I will in time address to the best of my ability. Let’s get quizzical! 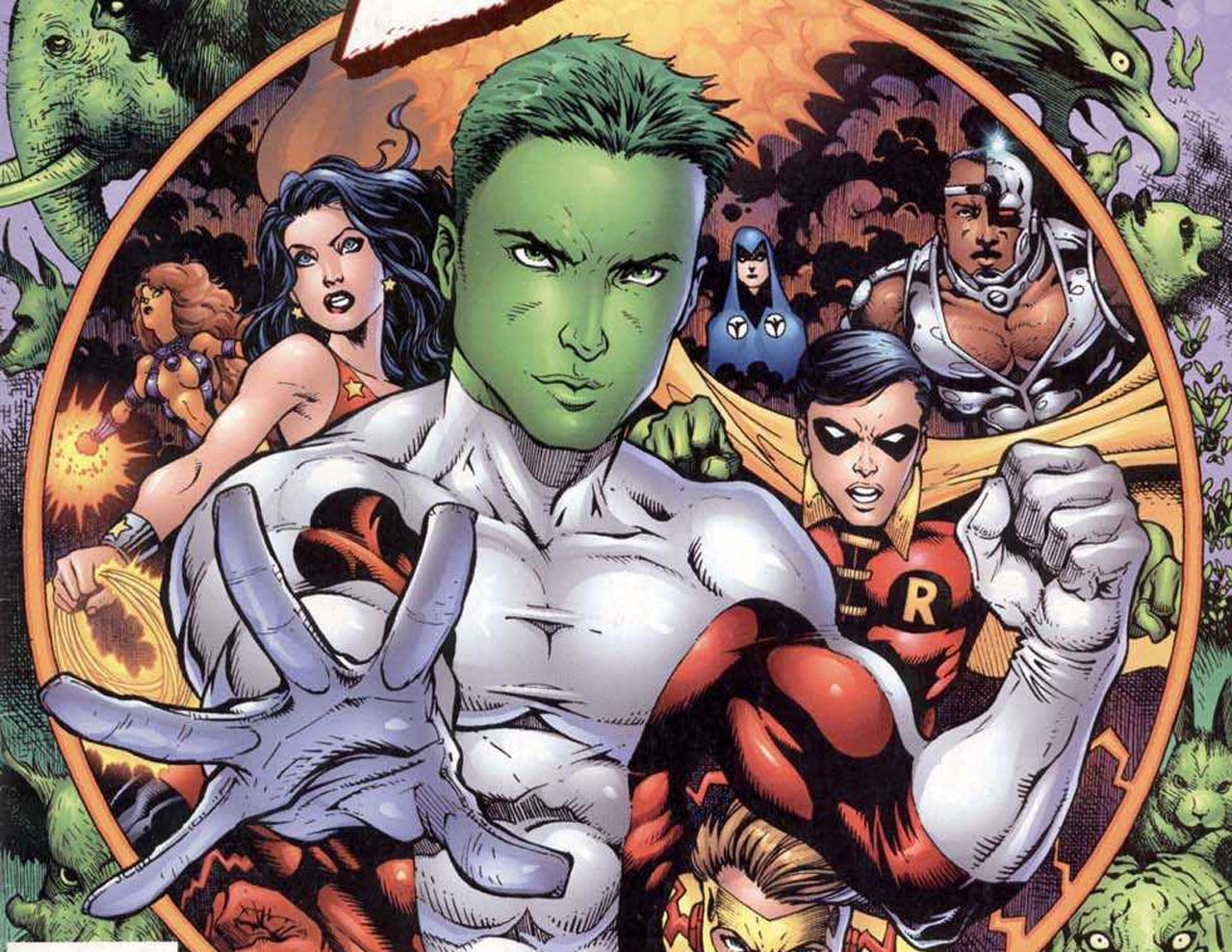 What was the reasoning that Beast Boy changed his name to Changeling and when did he change his name back? I always just assumed Marv Wolfman and George Pérez didn’t like the name Beast Boy. Was there any in comics explanation for going back to using the name Beast Boy?” -Green_Loontern

Garfield Logan had always been Beast Boy during his time with the Doom Patrol. But part of the mission statement Wolfman and Pérez had going into NEW TEEN TITANS was that the teenagers on the team should act like… actual teenagers. And what does any teenager want most? To be seen as an adult. So, gone were the “Boy” and “Girl” appellations for any member of the team. Just as the one-time “Wonder Girl” of the original sixties roster was now simply “Donna Troy,” so too did the former Beast Boy take on a new appellation. True, “Kid Flash” remained “Kid Flash” in that lineup, but that was more about Wally’s ongoing relationship with Barry Allen at the time.

Canonically speaking, though, a reason is provided as the new members of the New Teen Titans swap origin stories over a campfire in 1982’s TALES OF THE NEW TEEN TITANS. Changeling’s story, TALES OF THE NEW TEEN TITANS #3, fills in the missing time between his Doom Patrol years and his arrival on the Titans. There, Garfield confesses that Nicholas Galtry, the corrupt guardian who took him into custody after his parents’ death to rob him of his fortune, made such a mockery of the “Beast Boy” name that he could no longer use it without associating that appellation with a man he hated.

Garfield would remain Changeling for 20 years, until 2000’s four-issue BEAST BOY limited series, co-written by Ben Raab and a certain Mr. Geoff Johns. This yet undigitized chapter (for now) in Garfield’s story finds him trying to make a life for himself in Los Angeles, only to find himself drawn back into the superhero life once more. Sure enough, when the media accidentally reverts to using his retired Doom Patrol era codename, the original title sticks to the point that Garfield ultimately must resign himself to the reality that many of us know all too well: you can never really pick your own nicknames. 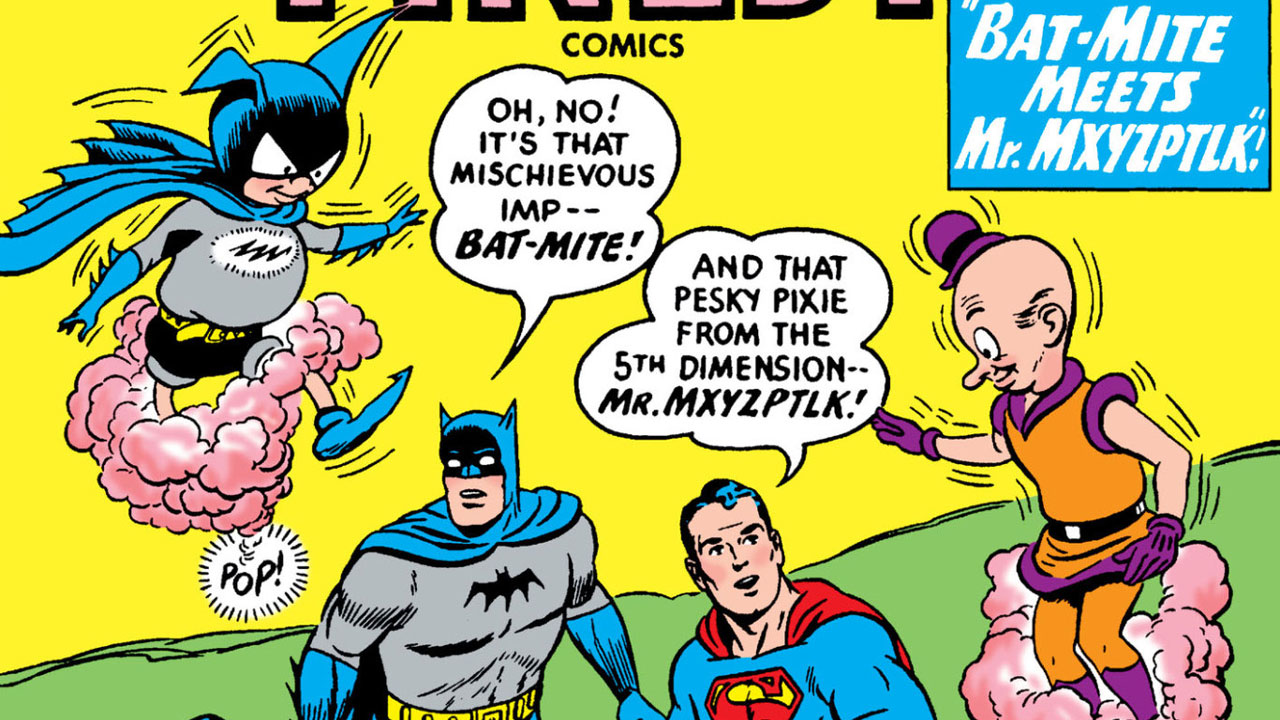 While catching up on Batman: The Brave and the Bold  (most of which I missed the first time around), I reacquainted myself with the mischievous Bat-Mite. His appearances there were some of the true highlights of that series. He may have started out as a Mr. Mxyzptlk knock-off, but he’s become so much more than that over the years.

Of late I’ve noticed that the Mite is said to be a resident of the 5th Dimension, home to Mr. Mxyzptlk. And apparently, they’re not the only ones. Qwsp, an Aquaman Silver Age creation, and of course Oswald Archibald Thunderbolt, are also now citizens of said realm. So, just when did all this home turf I.D. take place? And what writers or editors take credit for that call?

And just one more quickie, if you don’t mind HCQ, sir. Just who is the ‘little man’ behind the mask? What is Bat-Mite’s secret identity, on his home world? He does have one, doesn’t he? Or, does he just get dressed up when he comes to visit his hero? -Wrightline1.42741

You’re right to smell a story here: Bat-Mite has always been a being from another dimension, the idea that he comes from the same place as Mr. Mxyzptlk is one that wasn’t canonically established until much later. In Pre-Crisis continuity, Bat-Mite was merely said to be from a dimension of “Mites” like himself, with no concrete relation to Mxyzptlk and his ilk. In fact, when Bat-Mite and Mxyzptlk first meet in 1960’s WORLD’S FINEST #113, they seem to explicitly originate from two entirely different realms, and engage in a contest to see whose magic is more powerful. Other Silver Age stories elaborate that in Bat-Mite’s “Mite Dimension,” watching Batman’s exploits unfold was not just a favorite pastime of Bat-Mite’s, but among all his people. Picture, if you will, an entire world of Batman fanboys, to the exclusion of any other interest. I mean, is it really so far-fetched? The only thing Bat-Mite did to set him apart was muster up the gumption to meet their idol himself. 1977’s The New Adventures of Batman dubbed this extradimensional world “Ergo.”

Giving heroes a mischievous or bumbling otherworldly comic relief to spice things up was a pretty common affair in the Silver Age, but they weren’t suggested to all come from the same place until 2001’s satirical anthology BIZARRO COMICS, which showed them all together in Mxyzptlk’s homeworld of Zrfff in the 5th Dimension. Finally, in 2005’s “Lost and Found” story arc, as told in JSA #78-80, the origin of Thunderbolt is retold which finally, canonically establishes these extradimensional beings as all hailing from Mxyzptlk’s home base.

As for Bat-Mite’s true  nature… well, now you know the Pre-Crisis story of a fanboy who takes his passion to the next level with a cross-dimensional pilgrimage. But 2006’s SUPERMAN/BATMAN #25 establishes another origin for him, as a leftover entity created during The Joker’s dalliance with 5th dimensional powers in 2000’s “Emperor Joker” storyline. Later, Grant Morrison’s “Batman R.I.P.” re-establishes Bat-Mite as a figment of Batman’s addled imagination… although, as Bat-Mite asserts, there really is no difference between the 5th Dimension and imagination itself. But as far as the most recent take goes, the 2015 BAT-MITE limited series by Dan Jurgens and Corin Howell uncomplicates the issue by making him just another 5th dimensional schmoe, no deus ex machina required.

NO ONE CAN DESTROY THE METAL, THE METAL WILL STRIKE YOU DOWN WITH A VICIOUS BLOW 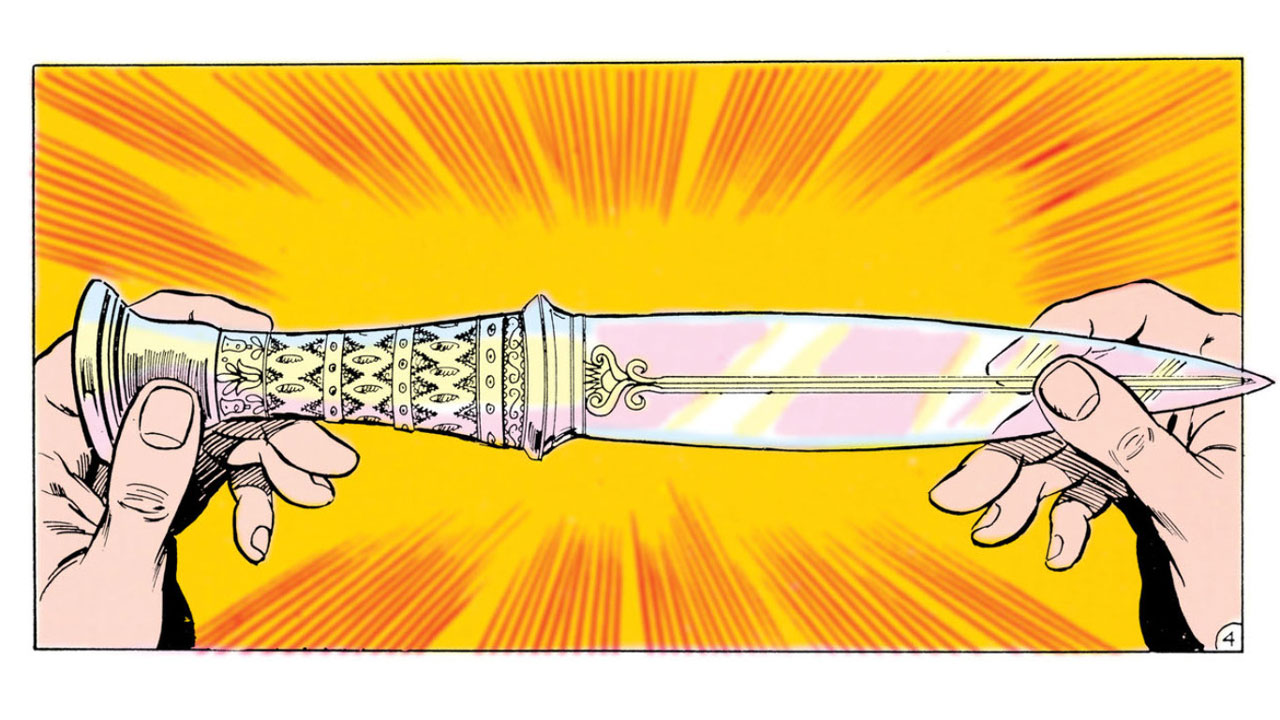 “Hi @HubCityQuestion! I recently went back and read DARK NIGHTS: METAL. I really enjoyed it, and it’s by far my favorite ‘crisis.’ But there’s something that I don’t quite understand… what are the ten metals?” -The_Big_Red_Cheese

Okay, this is going to require a little bit of a history lesson. Back in the Golden Age, Hawkman’s equipment was said to be made of “ninth metal.” This was a reference to a commonly taught archaeological theory at the time that in ancient times, eight different elements were used in metallurgy: gold, silver, copper, lead, zinc, tin, iron, and either mercury or antimony (depending who you ask). “Ninth metal,” then, suggested something otherworldly, a metallic substance beyond human understanding. This bit of knowledge has become more obscure and less, say, strictly historical as the years have gone by, and so for most of the intervening years between Hawkman’s 1940 debut and DARK NIGHTS: METAL, Hawkman’s mace and harness were said to be made of “Nth Metal.”

The “Tenth Metal” introduced in DARK NIGHTS: METAL is actually “Element X,” a Jack Kirby creation from his NEW GODS series, and the basis of Fourth World metallurgy. Mother Boxes, for example, are fashioned from Element X. Though chosen at the time to suggest an unknown variable, Snyder and Capullo interpret “X” as a Roman numeral in METAL, dubbing it the “Tenth Metal” after the Thanagarian “Ninth.”  So, in summary, the ten metals are gold, silver, copper, lead, zinc, tin, iron, either mercury or antimony, Nth Metal, and Element X. You’re welcome!

Oh, I should also note that in addition to those numbered metals, DARK NIGHTS: METAL incorporated four additional fictional metals addressed in Snyder’s preceding run on BATMAN from 2011 to 2016: Promethium, used in both Cyborg and Deathstroke’s weapons and armor, as well as the device in the Batcave built to back up Bruce’s memory, Dionesium, which is incorporated in the immortality of Vandal Savage, the Lazarus Pits, and (debatably) The Joker; Electrum, used by the Court of Owls to resurrect their Talon agents; and “Batmanium,” an extremely dense metal used in batarangs during Jim Gordon’s brief tenure as the mech-suited Batman. Together with the Ninth Metal, the Court of Owls crafted an alloy of these five superheavy elements to open up a gateway to the Dark Multiverse.

And that’s all he wrote for this week! He being “me,” that is, trying out some third person narration. And while he’s at it, make sure that YOU stop by his offices in the community this week for the further adventures to follow when one only ASKS… THE QUESTION. (Again, me.)