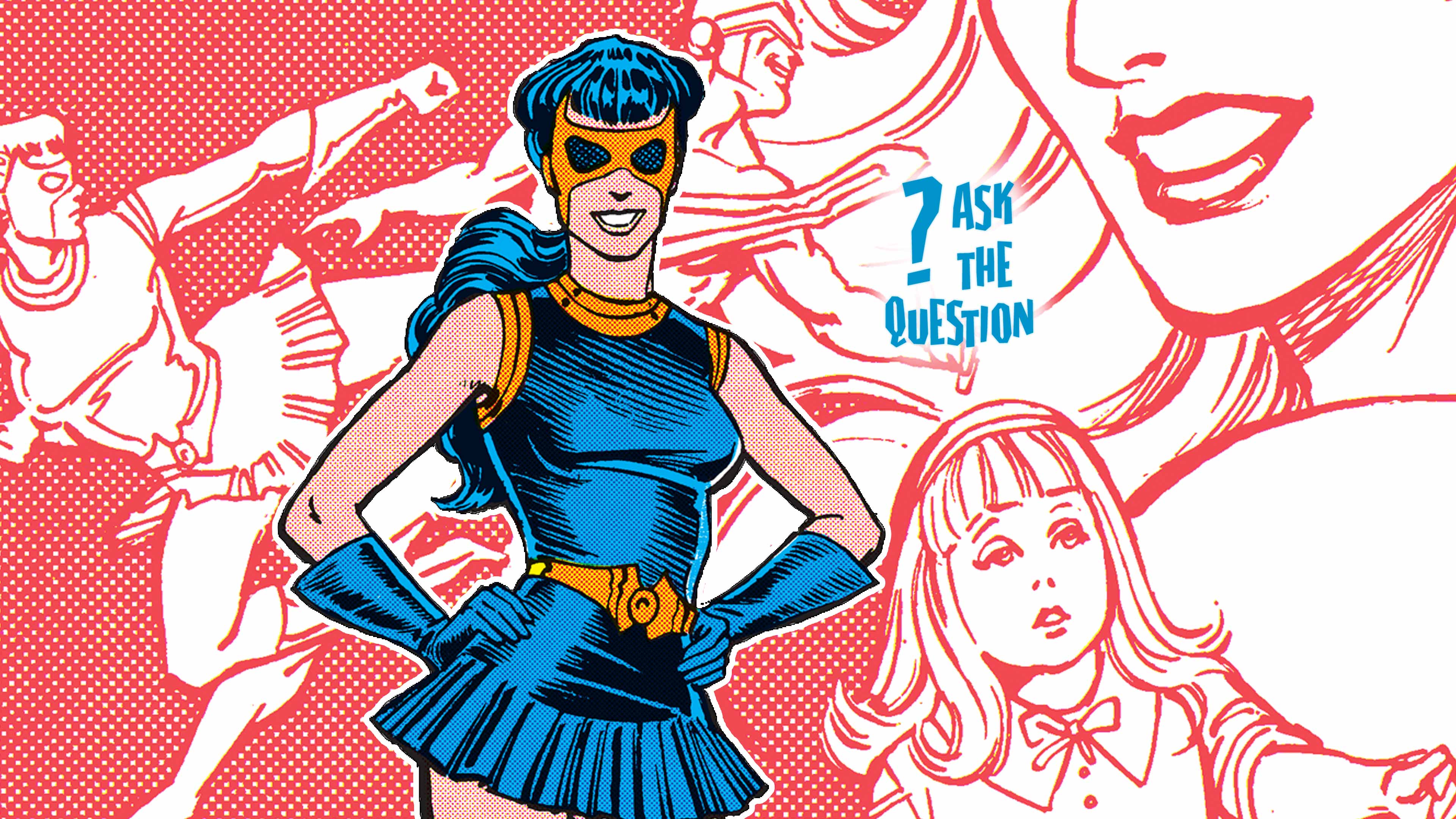 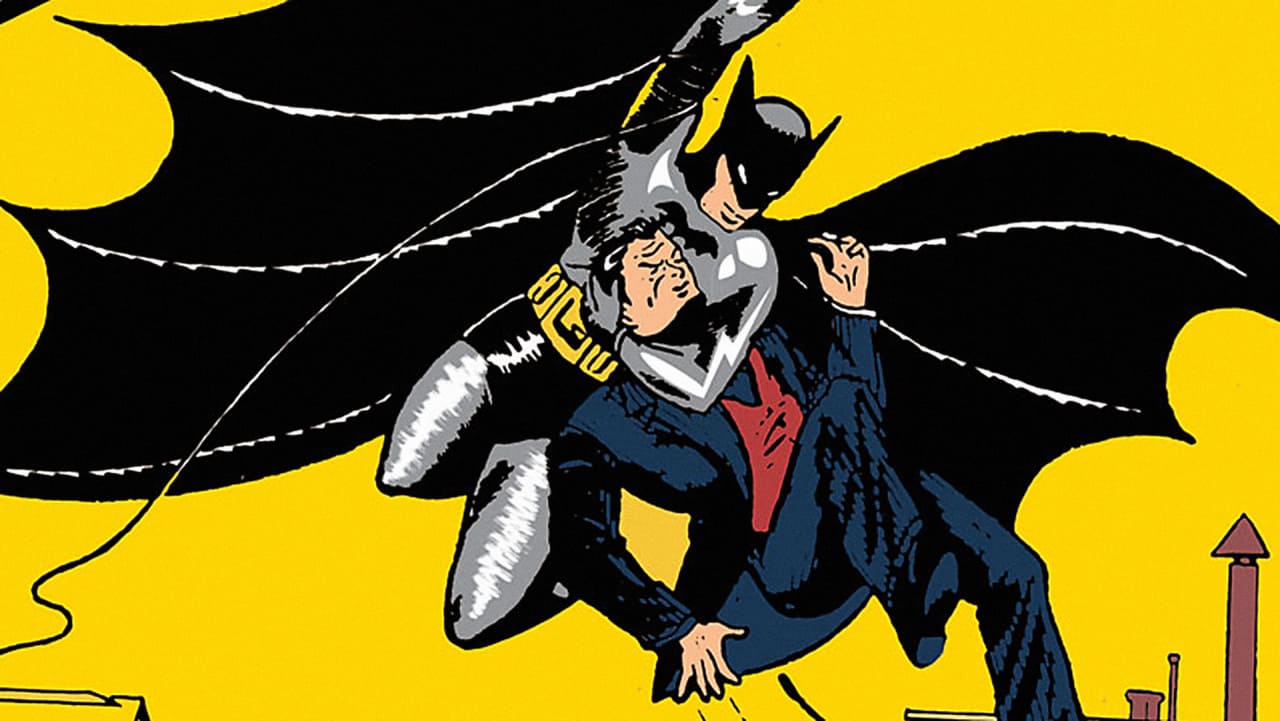 “Who has written or drawn the most Batman comics and how many have they done?”

As the most frequently written, drawn and published character in comic book history, we could be here all week listing everyone who’s ever had a crack at the Dark Knight. But over these 80 years, some have spent more time in the cape and cowl than others.

Before we count this out, let’s establish some rules: to count as a “Batman” comic, Batman has to be the main character. This means that Batman’s name must appear in the title. ‘Justice League’ and Bat-Family books like ‘Nightwing’ or ‘Batgirl do not count as ‘Batman’ comics for the purposes of this exercise. Team books which include Batman’s name will count. ‘Batman and the Outsiders,’ for instance, counts towards the total. ‘The Outsiders’ does not. Exceptions: ‘Detective Comics,’ ‘World’s Finest Comics,’ and ‘The Brave and the Bold,’ and ‘Dark Nights: Metal,’ all of which feature Batman as the pivotal character.

It’s also worth noting that a Most Prolific Creator list is not necessarily synonymous with a “best” creator list. Frank Miller, for instance, has only written Batman for 30 issues altogether. And yet he remains one of the most influential Batman writers of all time.

With that in mind, let’s take a look at the numbers as they stand for the top 5 most prolific Batman writers in DC history.

Chuck Dixon isn’t just one of the most prolific Batman writers, but some counts consider him the most prolific comic book writer of all time. Dixon shepherded Batman through both the ‘Knightfall’ and ‘No Man’s Land’ sagas, and co-created the Birds of Prey while he was at it.

One of the definitive Batman writers of the 1990s, Alan Grant brought us The Ventriloquist, Victor Zsasz, and Jeremiah Arkham, and saw us through the trio of story arcs which led to ‘No Man’s Land’: ‘Contagion,’ ‘Legacy,’ and ‘Cataclysm.’

As one of DC’s modern star writers, it won’t be long before Scott breaks the 200 mark. The New 52 ‘Batman’ run, and the year-spanning weekly titles ‘Batman Eternal’ and ‘Batman and Robin Eternal’ are the main boosters of Scott’s Bat-Numbers.

The creator of Black Mask and the first Jason Todd writer, Doug Moench started writing Batman in the ‘80s and still hasn’t stopped. Along with Alan Grant and Chuck Dixon, Moench contributed to the ‘Knightfall’ and ‘No Man’s Land’ storylines, along with practically everything in between. But the #1 most prolific Batman writer is still the original:

Bill Finger co-created Batman himself, and then followed it up by building his entire world through the lion’s share of Batman’s Golden Age stories. Today, multiple Batman titles can be found on comic shelves (or arriving in the DC Universe archives) on any given week. But when there was only one or two Batbooks in town, it was Bill Finger who usually held court all on his own. With nearly a 150 issue lead, it may well be another 80 years before anyone comes close to the original and still reigning champion.

But what about the artists, I hear you asking…? Well, folks, I do believe we’ve got a two-parter on our hands here. Find out who the most prolific Batman artists are in next week’s edition of the column. 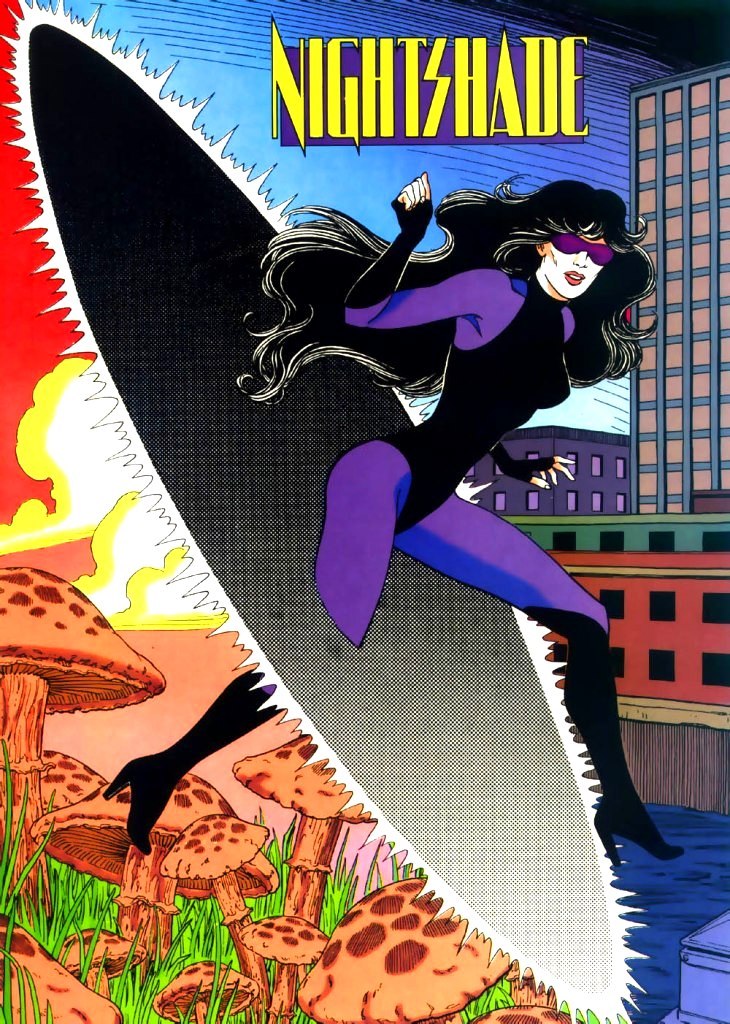 “Where did this costume first appear?”

Ah, Nightshade! Captain Atom’s one-time partner in crime fighting and romance, Suicide Squadmate and Shadowpact member, and the inspiration for Silk Spectre of ‘Watchmen.’ Originally a Charlton Comics character, Eve Eden first appeared by Cap’s side in 1966’s ‘Captain Atom’ #82. But she wouldn’t debut in the DC Universe until she and her fellow Charlton expatriates were integrated during ‘Crisis on Infinite Earths’ in the mid-80s — which happened to be the time this very New Wave look was in high fashion. Of DC’s Charlton acquisitions, Nightshade was one of the least known entities, and as such was due for a reinvention. And considering the style of the day, then-modern sensibilities were what dictated this very neon Miami night club look. 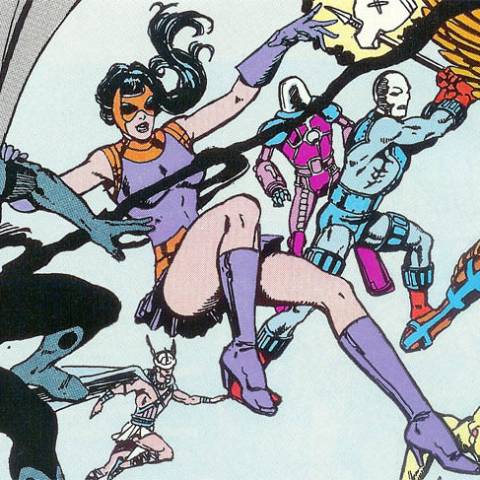 But the changeover from Eve’s classic duds didn’t take place overnight. For her first forays into the DC Universe, Nightshade rarely wore a costume at all. While fellow Charlton alumni Blue Beetle, The Question, Captain Atom, and Peacemaker enjoyed their own series, Nightshade was drafted on the first ongoing Suicide Squad lineup, where she mainly used her powers to quietly teleport the team around without hassle. When need arose for her to slip into combat, she’d rarely don the buglike ensemble familiar to her Pre-Crisis incarnation. In the appropriately covered “Nightshade Odyssey,” as covered in ‘Suicide Squad’ #14-16, Eve undergoes a traumatic ordeal when she calls in her chit with Amanda Waller to bring the Squad into her home dimension for a personal mission. In the aftermath, Nightshade adopts a cooler, more aloof persona, showing up as if nothing had happened in this brand new costume for 1988’s ‘Suicide Squad’ #17, designed by “Justice League Detroit” artist Luke McDonnell. 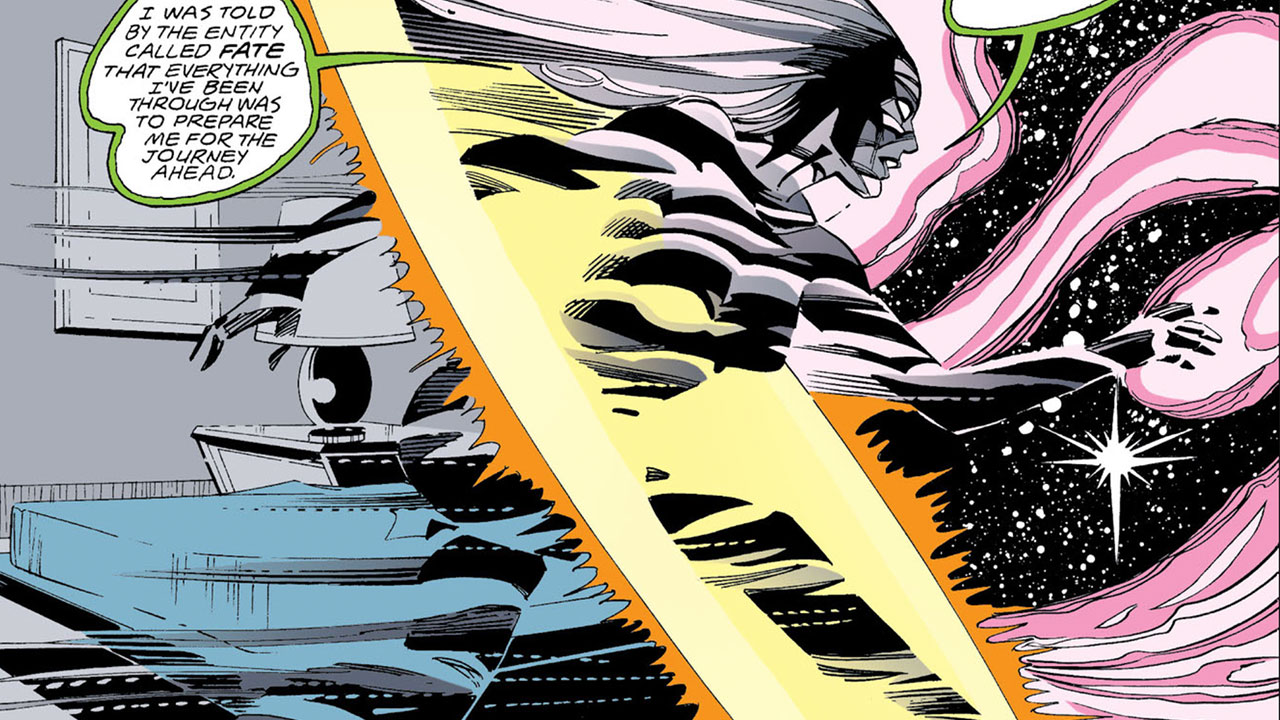 This would remain Nightshade’s signature outfit until 1999, when Fate literally intervenes — Jared Stevens, that is, who was wearing the mantle of Fate at the time of ‘L.A.W.: Living Assault Weapons.’ Fate expunged Nightshade of her costume when he revealed it to be a manifestation of a succubus which had taken root inside Eve during her time with the Squad. For the rest of ‘L.A.W.’ and for a few subsequent cameos, Nightshade appeared in a spectral form marked by jagged black and white lines. Finally, in 2003, Nightshade made the debut of her modern day costume for a brief spot in ‘Superman/Batman’ #3 drawn by Ed McGuinness. The costume is a bit of a throwback to her Silver Age days, to be sure, but it also possesses something of that timeless quality which allows outfits to stick around in the comics for decades. 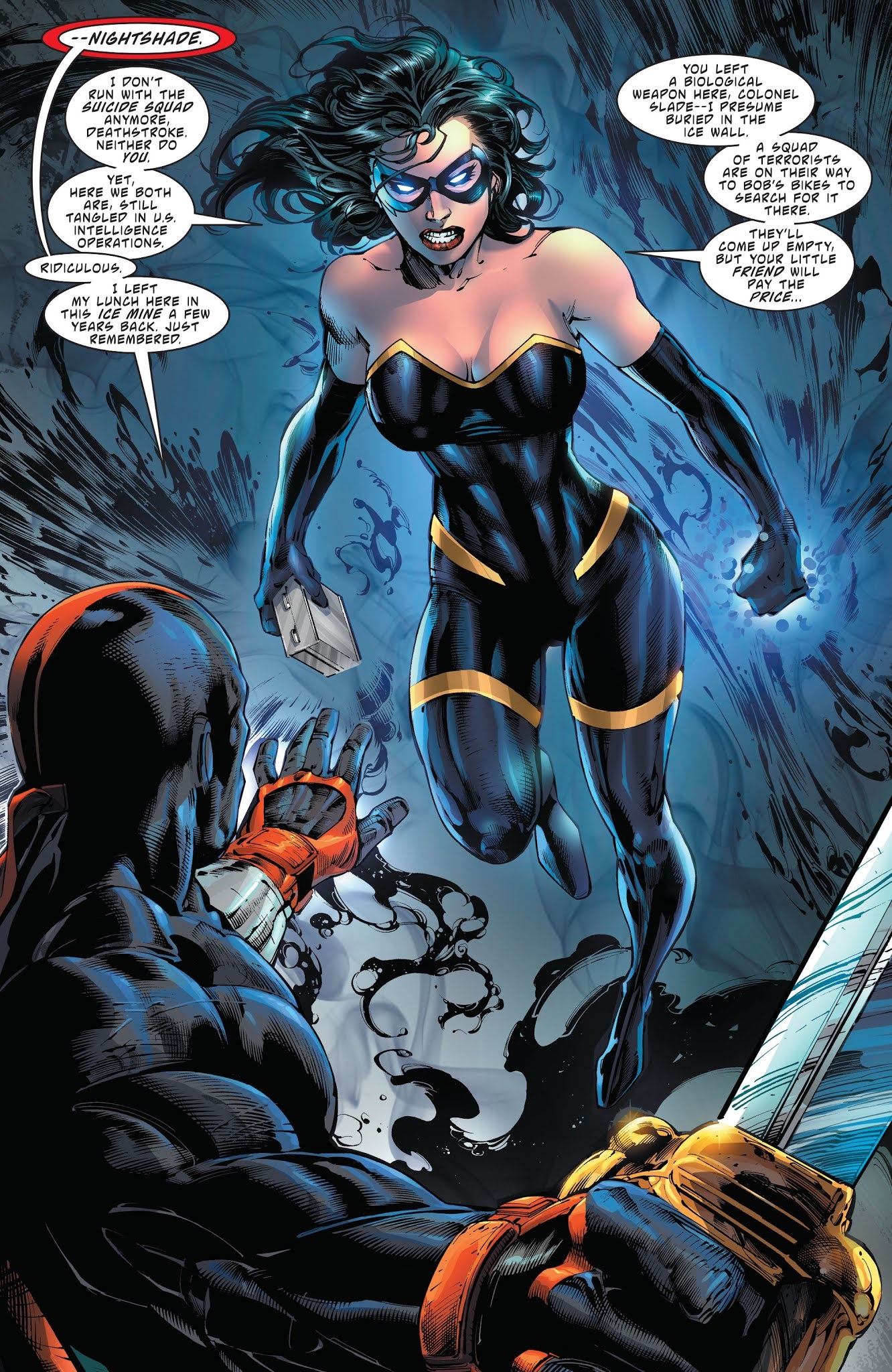 STRIKE UP THE BAND 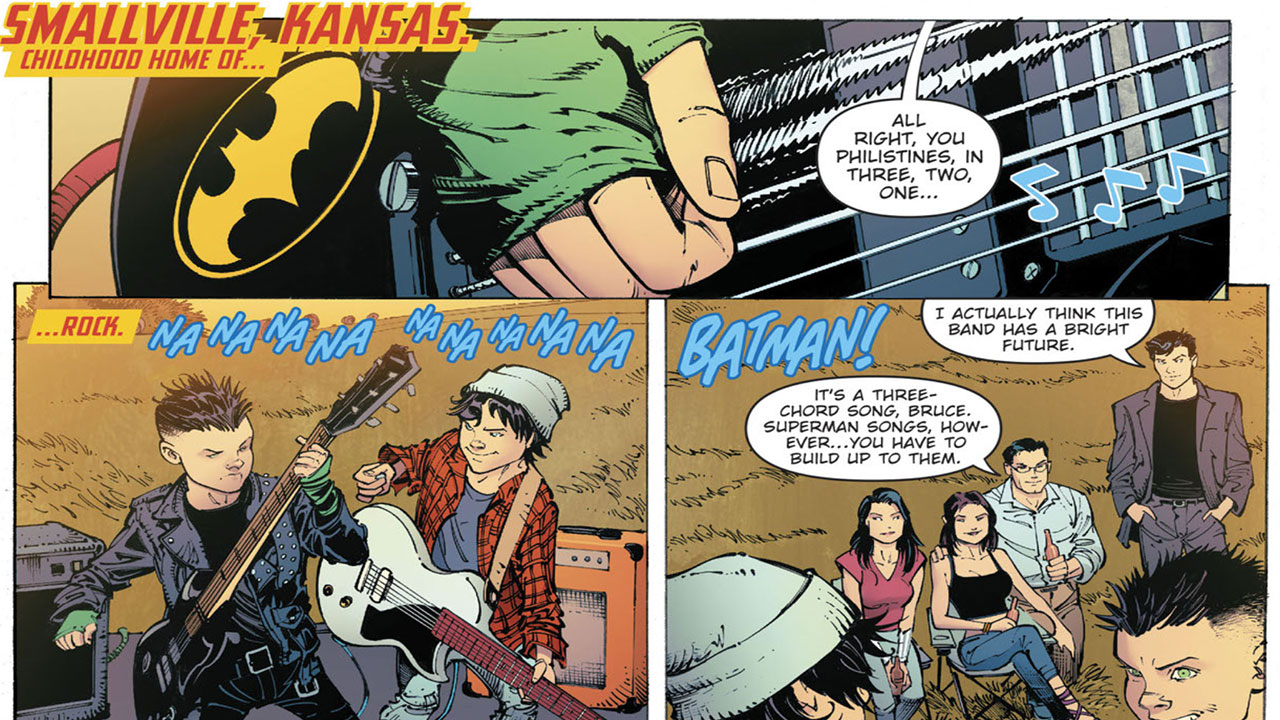 “What musical instruments is it known that the various DC heroes can play? Villains optional!”

The DC Universe is aplomb with musical talent. I’ve rounded up a list of talent for you here, organized by instrument.

* Alfred Pennyworth celebrates the resolution of ‘Dark Nights: Metal’ by backing the Super Sons on drums.

* Roy Harper, aka Speedy, Arsenal, and Red Arrow, played drums for the band “Great Frog” during his time with the Teen Titans.

* Billy the Girl, an intergalactic bounty hunter and friend of Lobo’s.

*As well as singing, Black Canary plays and writes original songs on the guitar.

* As Kate Kane, Batwoman has been known to break out a guitar to liven up a party.

* Chase Lawler, one of the vigilantes who went by “Manhunter” in the ‘90s. (#WhoIsLeviathan)

* Thrasher, a rock guitarist and Hawkman villain who controlled people with his music.

* And finally, both Jon Kent and Damian Wayne break out electric guitars at the end of ‘Dark Nights: Metal.’

* To help practice and strengthen her vocal control, Black Canary mastered the harmonica early on.

* Malcolm Duncan, occasional Titan and Bumblebee beau who’s gone by a variety of codenames—Guardian, Herald, Vox… and most significantly, Hornblower.

* Rovo Quasi, a blind musician chosen to be one of 12 cultural ambassadors to Themyscira when its existence became publicly recognized.

* The Phantom of the Sewers, an enemy of Etrigan who lives below Gotham City.

* Halo of The Outsiders was known to sometimes idly play the piano at Wayne Manor.

* Due to there even being a piano in Wayne Manor, it’s reasonable to assume that, unless it has sat untouched since his parents’ death, *someone* in the family knows how to play it.

* Andre "Dre" Cipriani, one of the Robins in ‘We Are Robin,’ was a child prodigy pianist.

* Cosmo, The Phantom of Disguise, a hero in the first 37 issues of Detective Comics before Batman completely took over the book.

* The Pied Piper, reformed Flash villain, based his whole persona around his pipe skills.

* In addition to her piano skills, Halo played the flute in her school band.

* The Mad Maestro, a Silver Age Justice League villain, played an enchanted synthesizer to commit his crimes. The Music Meister of ‘Batman: The Brave and the Bold’ fame was later based on him.

* The three villains who called themselves The Fiddler, who could dish out sonic and hypnotic attacks via their violin playing, were naturally master fiddlers. One was an enemy of Bulletman. Another, Benjamin Bowe, was an enemy of Vigilante. But the most famous one, Isaac Bowin, was one of the most persistent enemies in the Golden Age Flash’s Rogues Gallery. They were succeeded by Virtuoso, a female fiddler, who made her debut alongside the Secret Society of Super-Villains in the midst of ‘Infinite Crisis.’

* The Human Key, aka Paul Bodin, a Golden Age Batman villain who transitioned from violinist to lock picker. Not to be confused with “The Key,” a latter day Justice League villain.

And now, I can hear myself being played off the stage. I’ll return as always for another concerto of cases in the week to come. Just as long as you continue to ASK… THE QUESTION.