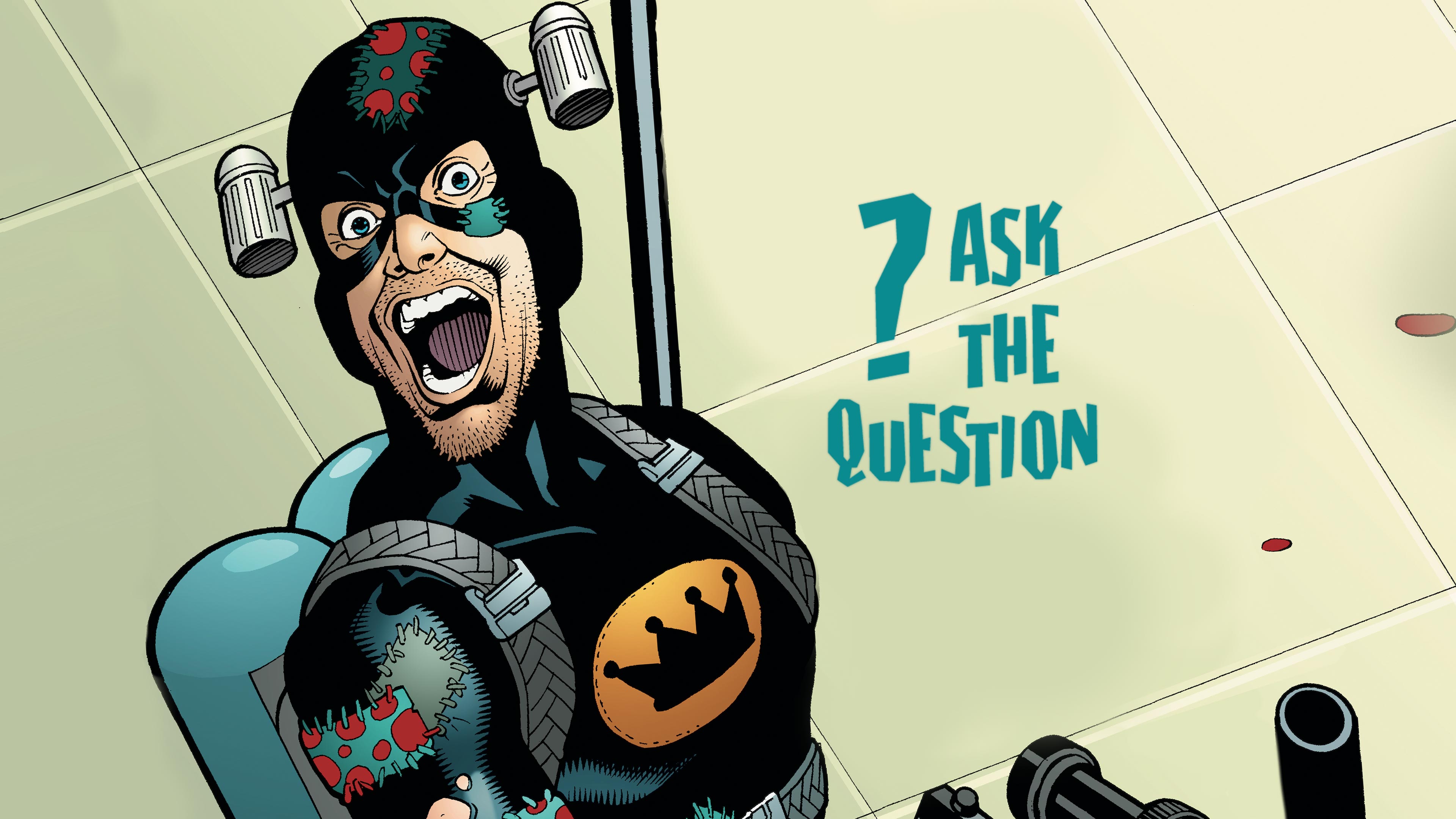 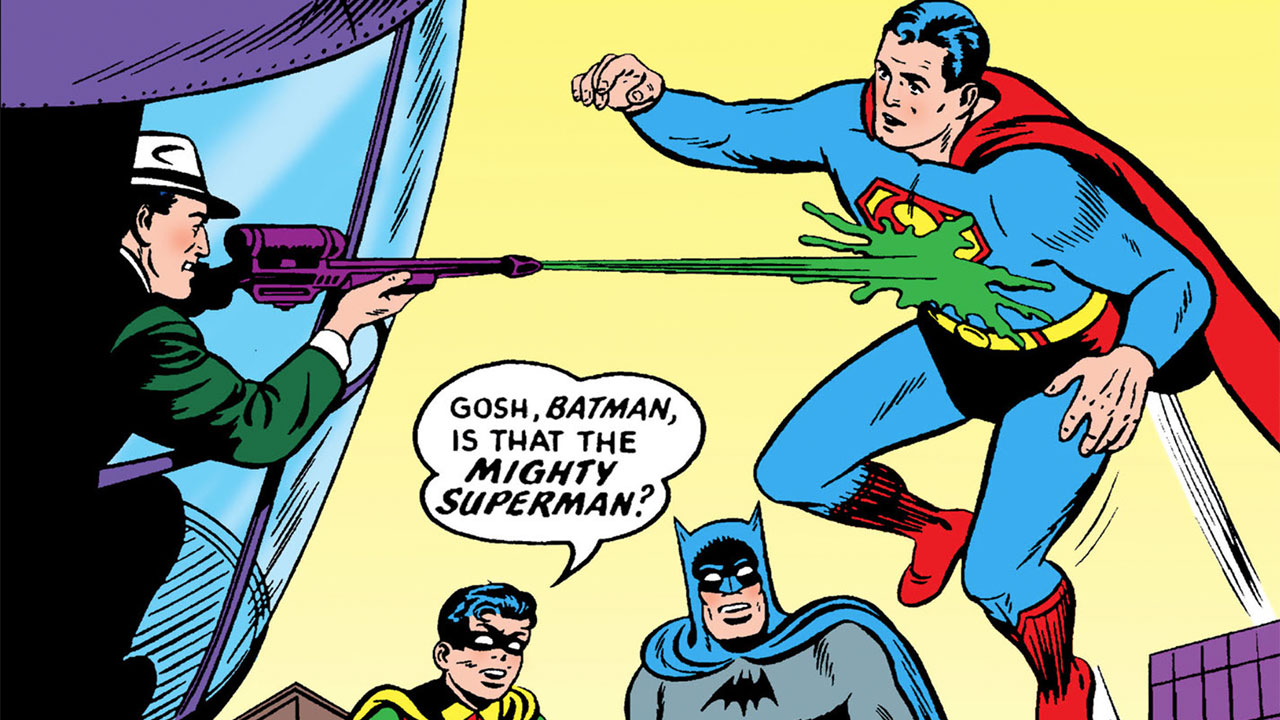 “What comics story brought Batman and Superman together for the first time to create the beginnings of the DC Universe? Love the column!”

I do this for the people, @konkrypton. But the answer to this one is more complicated than one might think. Due to the reiterative nature of DC continuity, Superman and Batman have appeared together for the first time many times.

The very first first appearance, as it were, was the cover of ‘New York World’s Fair Comics’ in 1940 — a promotional issue released just for the exposition. Superman, Batman and Robin appear together on the same cover for the first time, but inside the issue go on seperate adventures in the same location, never quite meeting in-story. At least you can say they were at the same place at the same time.

This was a common convention throughout the 1940s, with Batman and Superman often appearing together on the covers of ‘World’s Finest Comics’ but featuring in entirely separate stories. Believe it or not, the actual first meeting between Batman and Superman didn’t take place until 1952, in ‘Superman #76’ — 13 years after Batman’s debut! In a story titled “The Mightiest Team on Earth,” Batman and Superman find themselves on a cruise together, and quickly discover each other’s secret identities. (A satirical version of this story is retold in 2006’s ‘Superman/Batman Annual’ #1, “Stop Me If You Heard This One.”)

Six years later, in 1958’s ‘World’s Finest Comics’ #94, we learn that wasn’t necessarily the first time in THEIR history that Batman and Superman had met. In a flashback sequence set earlier in their careers, we find Batman, Robin and Superman working together to defeat Lex Luthor.

After 1985-86's ‘Crisis on Infinite Earths,’ John Byrne wrote the landmark 1986 ‘The Man of Steel’ limited series re-establishing Superman’s origins for a new generation of readers. In ‘Man of Steel’ #3, Byrne established a more complex dynamic between the duo, with their ideological differences fostering an uneasy alliance.

In ‘Superman/Batman: Secret Origins 2003,’ Jeph Loeb and Tim Sale go even further back in a story titled “When Clark Met Bruce.” Before either began their heroic journeys, a young Bruce traveling through the countryside with his trusty chauffeur Alfred finds himself stranded in Smallville when their car breaks down. As local farmer Jonathan Kent helps Alfred out with his car trouble, Bruce is picked up for a friendly baseball game with some local kids, including a young Clark.

In 2011, DC continuity was reimagined once more for the New 52, where Superman and Batman have two first meetings. The first is in the very first comic book published in this era, ‘Justice League’ #1. But in 2013’s ‘Batman/Superman’ #1, we learn that may not have been their first meeting after all… just the first one they remember.

Now that The Rebirth era has embraced much of the Pre-New 52 history of the DC Universe, it’s difficult to say which of these is currently the canonical first meeting between the World’s Finest. But if you ask me personally, well, to borrow a phrase, “It was on the boat.”

The thing about legends, especially when it comes to the enigmatic leaders of clandestine organizations, is that they always grow in the telling. If Ra’s al Ghul’s story seems to change every time it’s told, it’s because the narrator can’t necessarily be considered reliable. I personally like to imagine this as intentional, as opposed to a case of different writers of the character simply not communicating clearly over the years.

In cases such as these, the most recently stated fact is generally considered the most accurate, overruling contradictory information through the practice of “retcon.” Here’s what we do know: ‘Dark Days: The Casting,’ one of the set-up issues to ‘Dark Nights: Metal,’ establishes the Council of Immortals, a secret cabal of undying individuals who guide the course of humanity behind the curtain. Ra’s al Ghul is said to be the *youngest* of its members. Since other Council members include Mary, Queen of Blood (born 1591) and the Hangman, Jack Ketch (born in the mid-1600s), Ra’s al Ghul may actually be younger than even ‘Azrael’ claims. (The organization also includes Uncle Sam, but his own complex origins may go further back than the 1776 date one might assume.) There’s one thing classic Hollywood starlets and immortal super-villains have in common: you can never really trust them to tell you their age.

A ZA'ATAR IS BORN 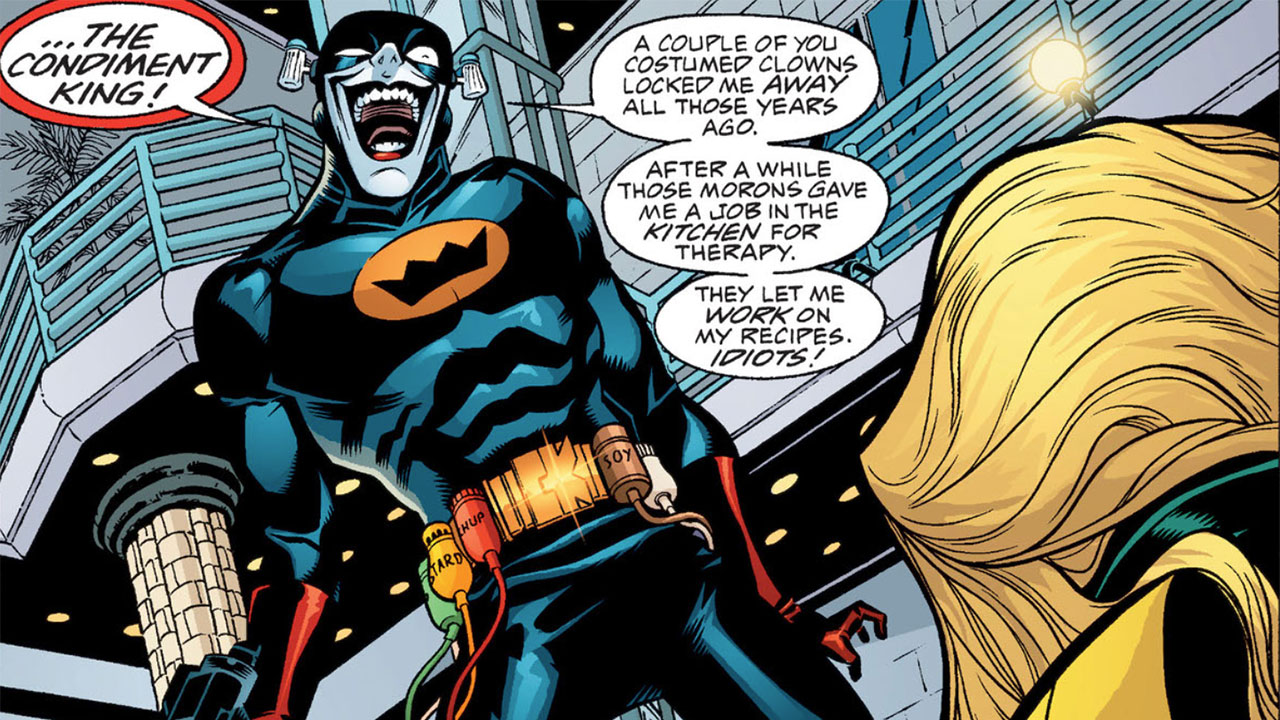 “What’s the deal behind Condiment King?! Do we actually know who he is?”

Condiment King has been the ultimate punchline when discussing obscure Batman villains for many years now, but the character himself started as a joke. The original Condiment King was Buddy Standler in the Paul Dini/Randy Rogel-scripted ‘Batman: The Animated Series’ episode “Make ‘Em Laugh,” one of Gotham’s premiere stand-up comedians. Along with a panel of other professional comics, Standler sunk the Joker’s dreams of comedy stardom in an open mic competition years ago when he couldn’t quite cut the mustard. As an act of revenge, the Mountebank of Mirth used Mad Hatter’s mind control to have Standler adopt a ridiculous Super-Villain persona — alongside less enduring comic Super-Villains like Packrat and Mighty Mom.

A second Condiment King, Mitchell Mayo, debuted in 2002’s ‘Birds of Prey’ #37 as part of the “Joker’s Last Laugh” storyline. Oracle describes Mayo as a loser of a super-villain, but one who’s been seriously leveled up by the Joker’s toxin which had infected many of the world’s villains in that particular arc. Mayo returns when he relishes the opportunity to join the crew of long-time Doom Patrol foe General Immortus, but was killed by the Human Flame in ‘Final Crisis Aftermath: Run!’ #4.

Fortunately, this tragedy is reversed when we ketchup with Mayo in the “Rebirth” era. The Condiment King has made a few cameo appearances throughout writer Tom King’s ‘Batman’ run, usually hanging out at the “Batburger” fast food chain. Near the end of Amanda Conner and Jimmy Palmiotti’s “Harley Quinn” run, we find that Mitchell Mayo has gone legit and opened his own restaurant in Coney Island. And that’s sal, sa. 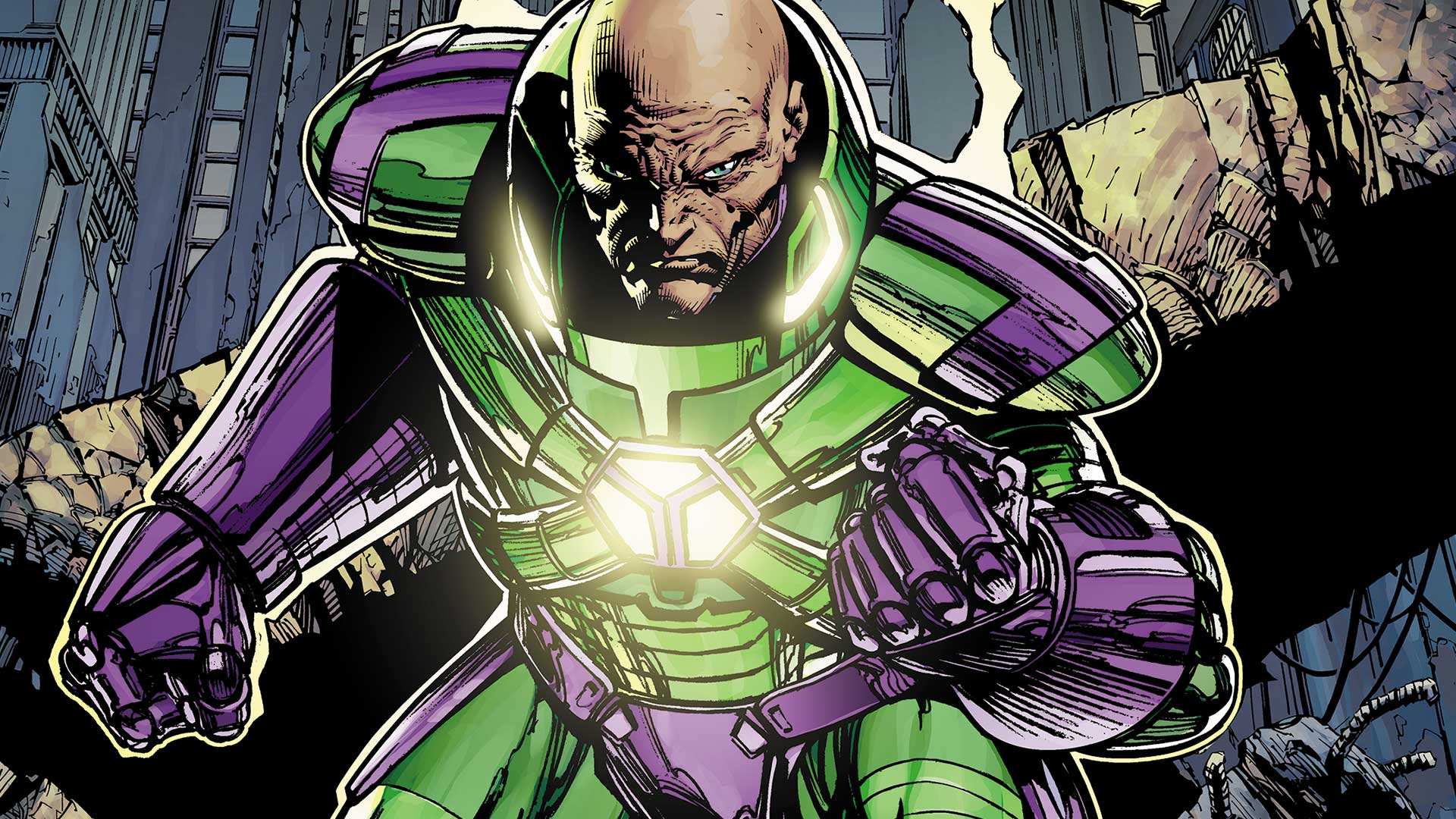 “What are some of the most evil things Lex Luthor has done in comics?”

Lex Luthor may be a hero in his own mind, but he’s been the menace of Metropolis since 1940. Across movies, television, video games, and even educational picture books, the extent of Luthor’s crimes has been uncountable.

(Unlike the number of cakes he’s stolen, which is forty. That’s as many as four tens. And that’s terrible.) 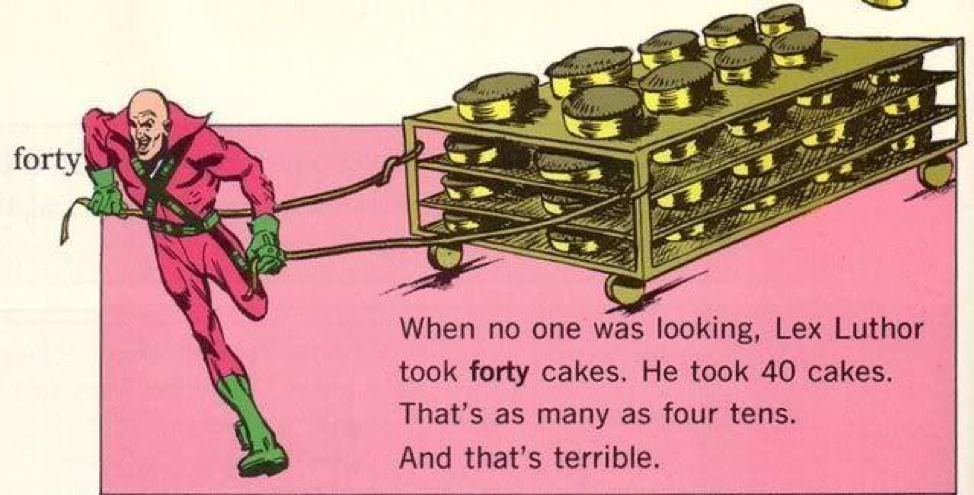 Knowing we could fill a book with the evil acts Luthor has committed in the comics alone, here are five of his greatest hits:

Years before ‘Batman: Hush’ would tread similar ground, ‘Lex Luthor: The Unauthorized Biography’ told the story of desperate journalist Peter Sands, who gets in way over his head while investigating Lex Luthor’s past — only to discover Luthor’s original sin, when he took charge of his own destiny at a young age by engineering the deaths of his own parents.

One of the greatest motivators in Luthor’s life of crime has been to discredit Superman in the eyes of his adoring public, so that attention can once again fall on him. In this blood-curdling tale of ego by writer Brian Azzarello and artist Lee Bermejo, Luthor goes to his furthest extreme yet. First, he secretly hires the Superman villain Toyman to blow up the Metropolis Daycare Center, killing 70 adults and children. Then he engineers a circumstance where he forces Superman to either save Toyman, or let him fall to his death. Superman is therefore placed in the dilemma of either letting a man die, or being seen as the protector of a mass child killer. Either way, Luthor wins… no matter how many had to die for his point to be made.

When Superman, Batman, and Wonder Woman vanish from the public stage for a full year in the ‘52’ series, one man who appears to rise to the occasion is Lex Luthor. In Superman’s absence, Luthor unveils the “Everyman” Project, designed to activate latent metagenes and allow a new age of heroes to begin. It’s only later that we learn this entire project was a means of providing human test subjects for Luthor’s own attempts to give himself super powers, and that he furthermore secretly maintains control over the abilities of everyone who comes to him. This comes to a horrifying head in the “Rain of the Supermen,” where in a bout of frustration at the lack of his own breakthroughs, he turns off every activated metagene through his Everyman Project at once — causing countless would-be heroes to plummet to their deaths.

Lex Luthor’s never been successful in destroying Superman. But in 2010, he accomplished the next best thing: the destruction of his people’s future. The ‘New Krypton’ saga dominated much of Superman’s stories during the late ‘00s, as the city of Kandor was blown up and reborn as New Krypton, led by an ascendant General Zod. But when this new population of Kryptonians was seen as a threat to Earth’s safety, Luthor earned a Presidential pardon for a lifetime of criminal activity by devising a plan to destroy New Krypton. The plan tragically succeeded, and the Kryptonian race was extinguished once more.

The most dramatic and ambitious act of villainy in Luthor’s long career may actually be happening right now. Throughout virtually all of DC’s ongoing titles, Luthor has been brokering deals with the greatest villains of the DC Universe to increase their power and allow them to achieve their goals, in exchange for an alliance in an upcoming war for the fate of the universe. But considering that Luthor’s opponent in this war appears to be The Batman Who Laughs, this conflict may come down to which is the greater of two evils.

That does it for this week. I do hope you’ve found my insights satisfactory. For further investigations into the machinations of the DC Universe, all that’s necessary of you is to come by my office and ASK… THE QUESTION. I’ll do the rest.