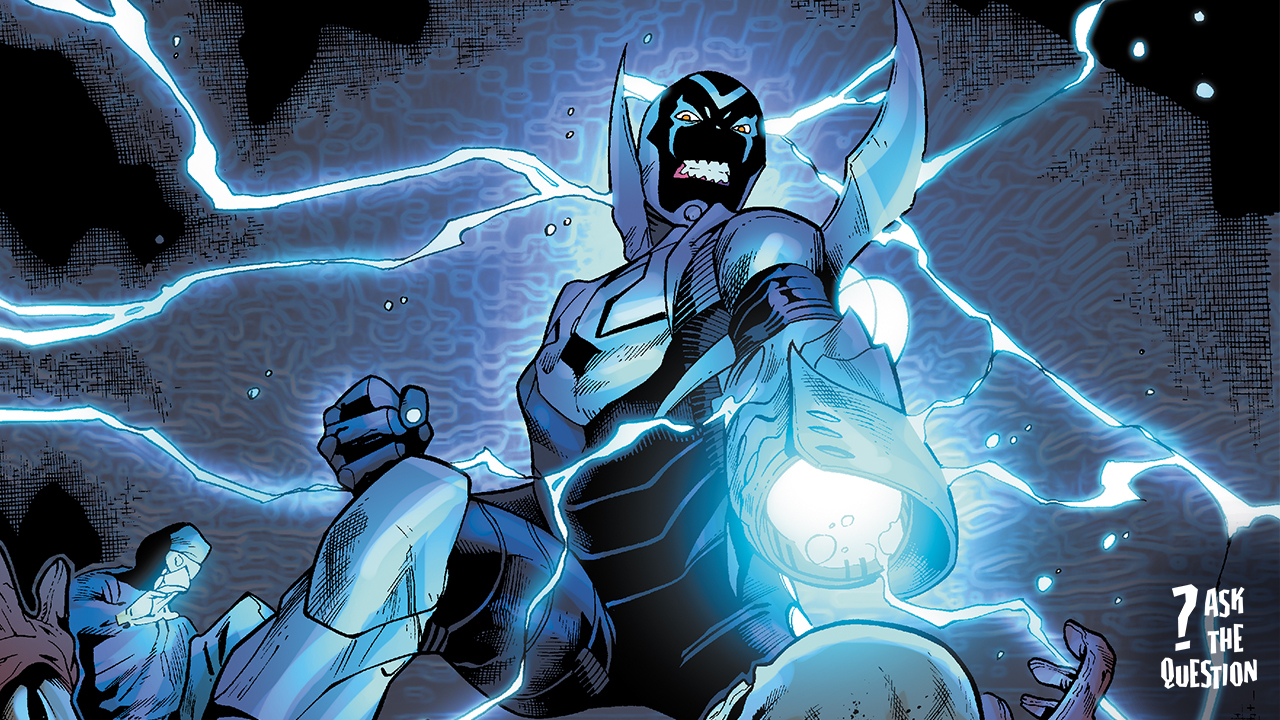 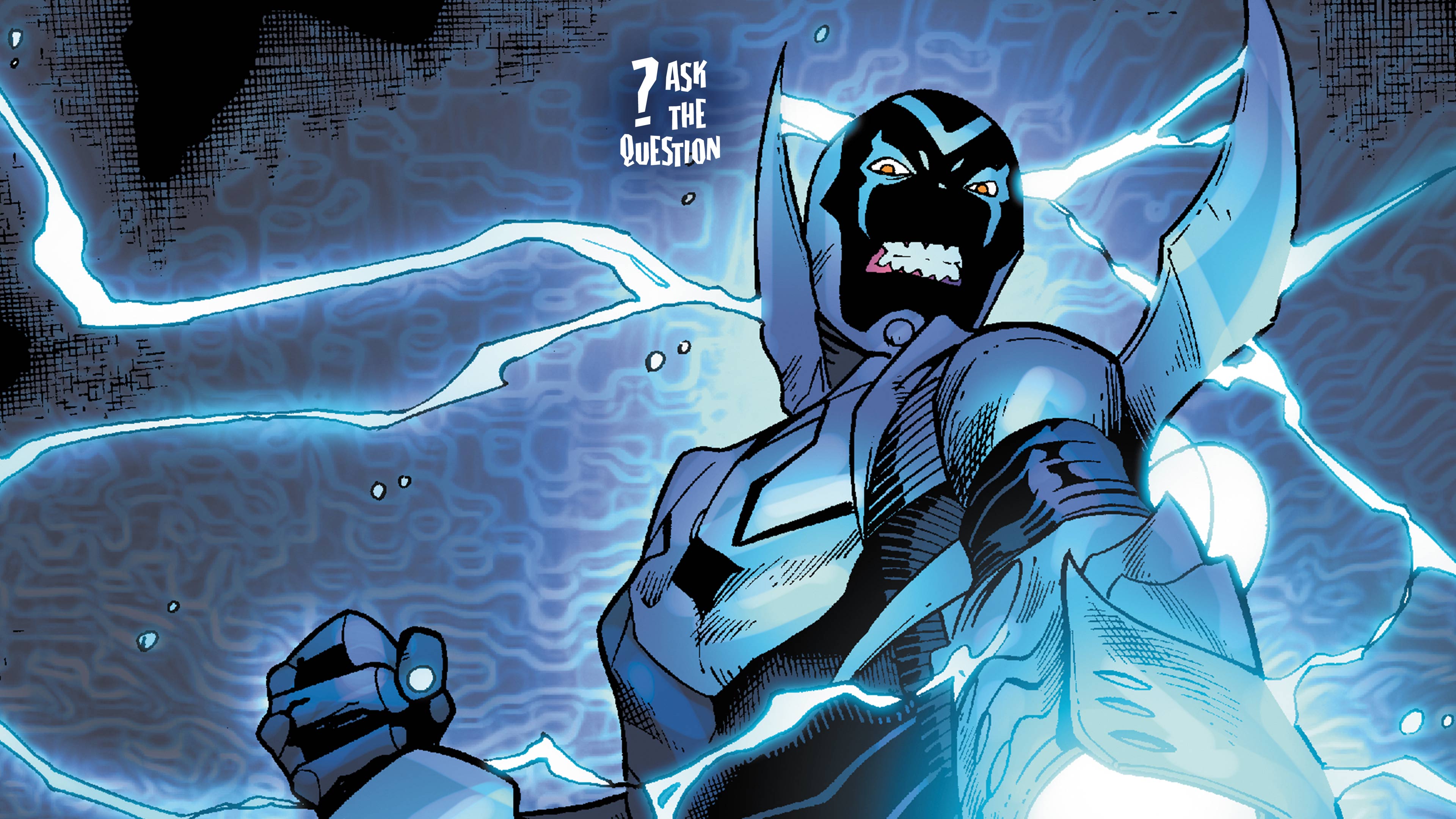 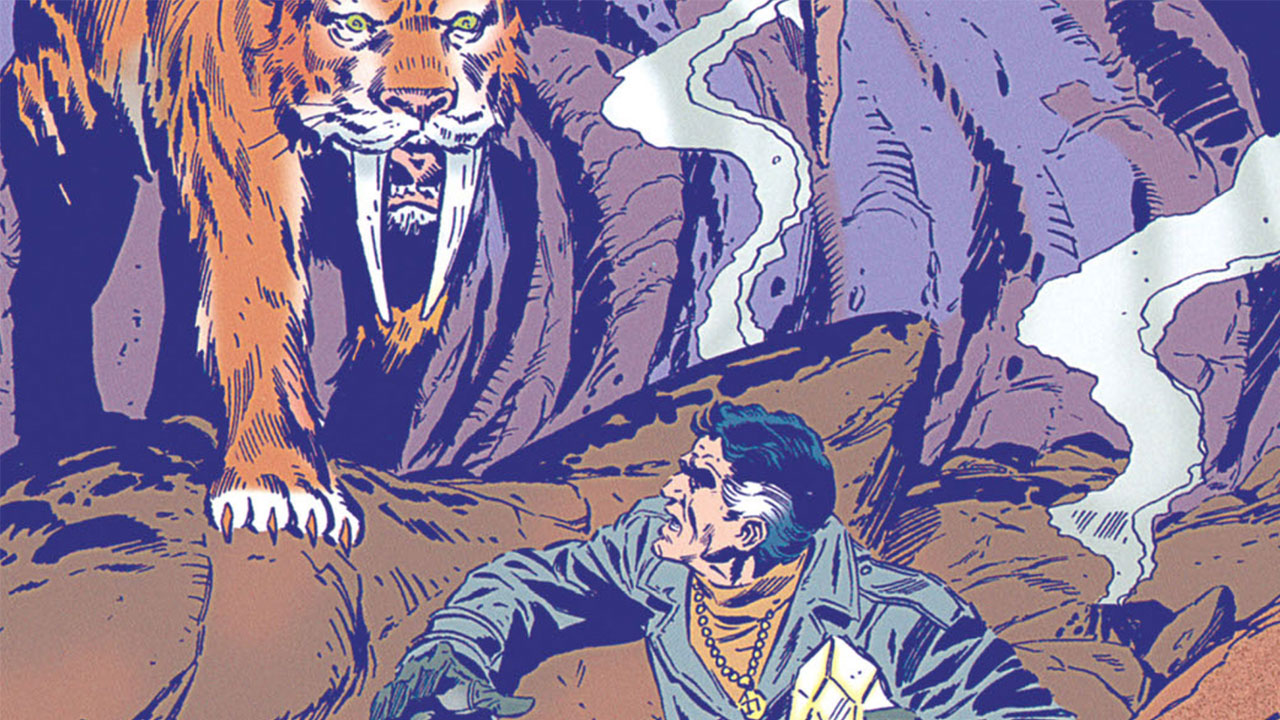 “In ‘Crisis on Infinite Earths’ #10, Lyla reports that Immortal Man died for the last time. What comic/issue did that happen in?”

“He was called Immortal Man, and he died a thousand deaths. Yet, within each death, he was reborn—though with a new and different body. But in helping to save his world, Immortal Man was eliminated from all existence.”

So chronicles Lyla Michaels, alias The Harbinger, in the pages of ‘Crisis on Infinite Earths’ #10. In its sheer breadth and scope, many claim the first ‘Crisis’ as the most ambitious crossover event of all comic history, taking into account the fates of all eras and dimensions across 50 years of DC’s vast and storied history. With tie-ins reaching nearly all of the titles DC published in the '80s, it’s a testament to the vision of ‘Crisis’ architects Marv Wolfman and George Pérez that one can discover something new upon each new read. But while many of the consequences of 'COIE' are explored and elaborated upon elsewhere, the cryptic fate of Immortal Man, Vandal Savage’s oldest and most tenacious foe, is only alluded to in this enigmatic footnote. It is perhaps fitting, as the Immortal Man’s final sacrifice was one which involved erasing himself from time entirely.

Immortal Man’s last adventures before the Crisis are depicted in ‘DC Comics Presents’ #77-78 as a member of the “Forgotten Heroes,” an esoteric team of DC characters who had fallen off the comic pages in years past, fighting in obscurity against equally esoteric villains for the fate of the planet.

But in the DC Universe, nothing stays forgotten forever. Following ‘Crisis on Infinite Earths,’ Immortal Man returns to the pages of history with his fellow Forgotten Heroes in ‘Resurrection Man’ #25. Could Mitch Shelley and Immortal Man in fact be one and the same? You’ll have to read on for yourself to find out.

OUT OF THE BLUE 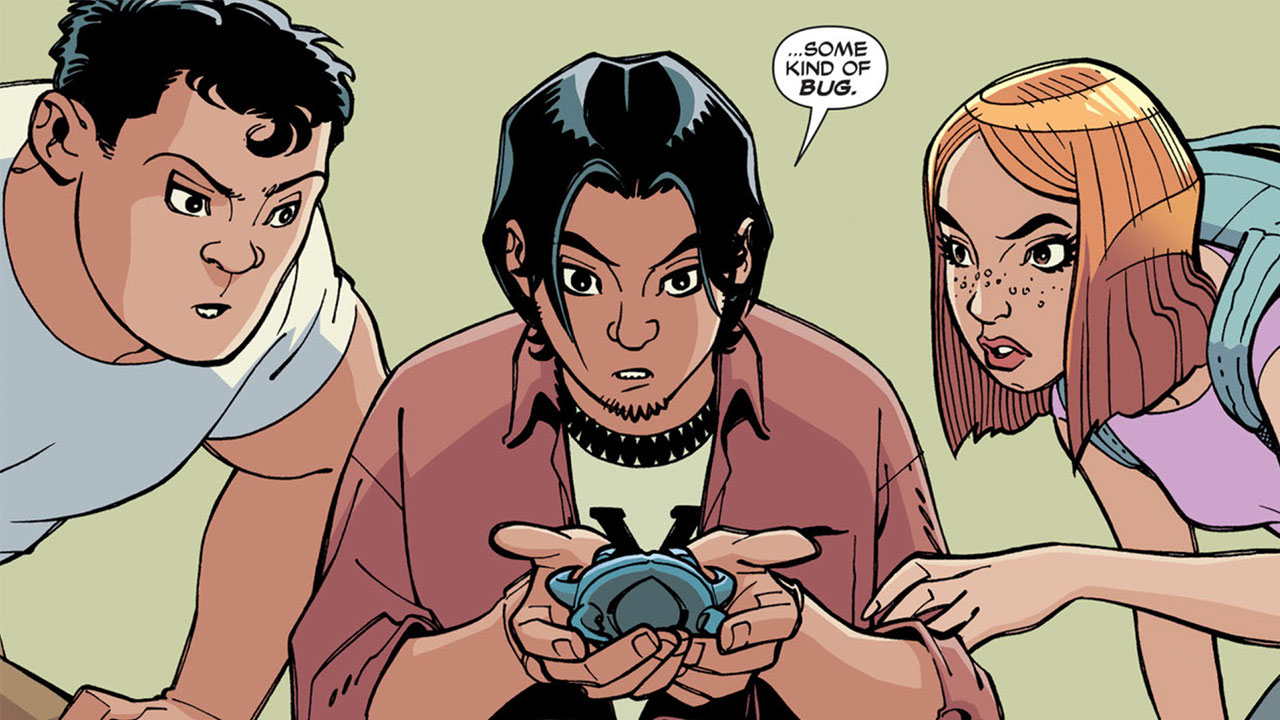 “Okay, this regards Blue Beetle, Jaime Reyes. What is the actual story with the beetle? Is it Egyptian like Doctor Fate said, or is it alien Reach technology? Everything I’ve read seems to bounce back and forth.”

There’s a simple reason it seems to bounce back and forth that way, Doomsday: because that’s exactly what it’s been doing.

Originally, the scarab of the Blue Beetle had no extraterrestrial or mystical properties whatsoever. From its debut in 1939 to 1964, the beetle in question was merely a symbol used by the original Blue Beetle, Dan Garrett, in his fight against crime on the pages of Quality Comics. In a Silver Age reboot for 1964’s ‘Blue Beetle' #1, Garrett’s symbol was given a new origin. Garrett’s profession changed from police officer to archaeologist, having discovered the scarab as an Egyptian artifact on an expedition.

Garrett took advantage of the Scarab’s many mystical properties until 1966, when the Blue Beetle concept was rebooted once again with Ted Kord inheriting the role, beginning with ‘Captain Atom’ #83. Ted Kord creator Steve Ditko preferred a more gadget-based approach to the character, and eventually had Garrett pass the scarab onto him in an origin story for the legacy hero—though Ted would never learn the secret of how to make it function.

40 years later, the scarab returns as the mantle of Blue Beetle is passed down once more: this time to Jaime Reyes, as depicted in 2006’s ‘Blue Beetle’ #1. In this new take on the character by Keith Giffen and John Rogers, it’s eventually revealed by 2008’s ‘Blue Beetle’ #25 that while the scarab does possess seemingly mystical properties, the truth is much more complicated. Long before the scarab was discovered in Egypt by the original Blue Beetle, it was an artifact of an expanding alien empire known as the Reach, which deployed them to colonize worlds into their dominion by bonding with a native host. Thanks to a malfunction, this particular scarab ended up in a state where Jaime could bond emotionally with it as well as physically, and the two eventually reach a mutual respect and understanding.

The nature of this relationship and the Scarab’s alien origins remained largely unchanged for the New 52 ‘Blue Beetle’ series. But when Keith Giffen returned to the character in 2016’s ‘Blue Beetle: Rebirth’ #1, big mystical heavy hitters like Doctor Fate and Arion, Lord of Atlantis became involved in the more supernatural aspects of the Scarab’s origins. Giffen’s final story arc, however, contained a few hints that the true nature of the Scarab may not be purely mystical after all… by revealing the surprise involvement in 2017’s ‘Blue Beetle’ #13 of the alien despot Lady Styx in an unexpected disguise.

The truth is that the nature of the scarab is ambiguous enough for readers to make up their own minds. But if you’d like my own opinion, I’ll have to side with science fiction author Arthur C. Clarke. Though he wrote many works throughout his life, perhaps his most famous piece is this astute observation: any sufficiently advanced technology is functionally indistinguishable from magic.

WRITTEN IN THE STARS 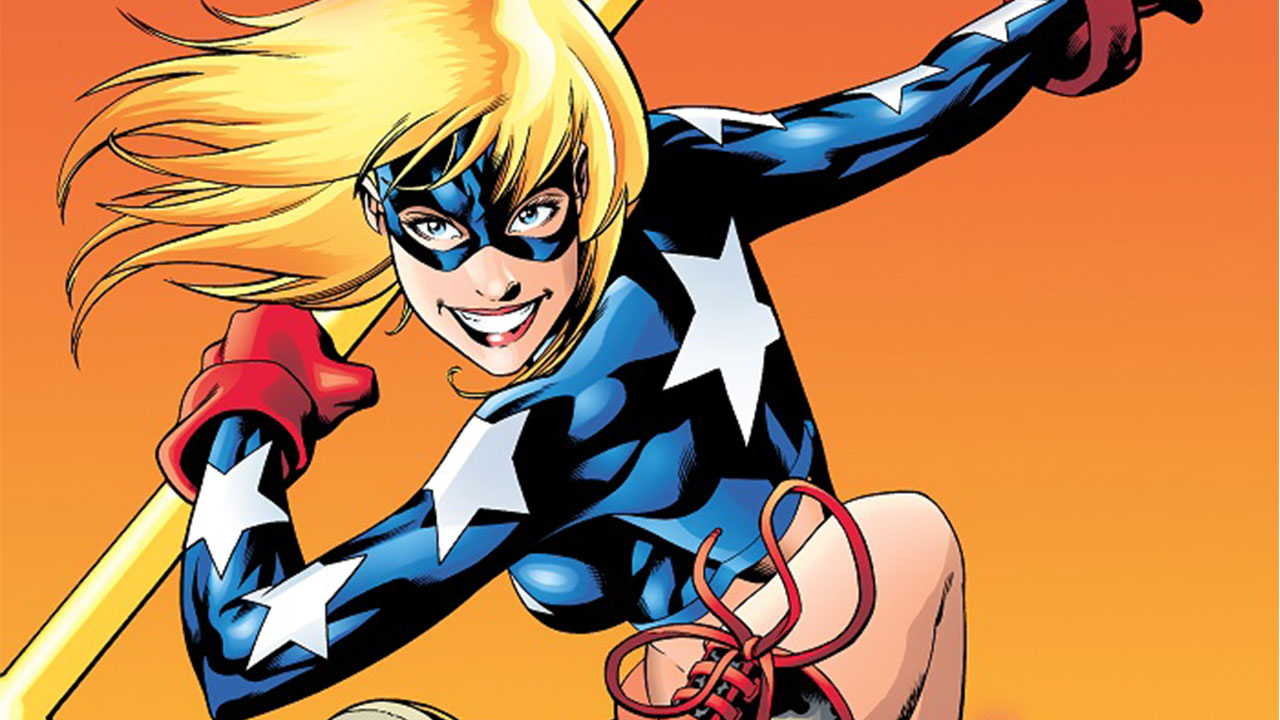 An important question, especially considering Stargirl’s impending live-action series on DC Universe! Courtney Whitmore was first introduced as the Star-Spangled Kid in 1998’s ‘DCU Heroes Secret Files’ #1, the second superhero to bear the name, and stepdaughter to the sidekick of the original. Now technically, it’s Courtney’s friend and classmate Mary Kramer who first suggests suggests “Stargirl” as a possible codename in 1999’s ‘Stars and S.T.R.I.P.E.’ #1. But it’s an idea Courtney ultimately dismisses, choosing instead to honor the hero from whom she inherited her mantle. In 2001’s ‘Starman’ #80, the incumbent Starman Jack Knight goes into retirement by passing his signature Cosmic Staff onto the next generation, as embodied by Courtney. With Cosmic Staff in hand and a fateful confrontation with her birth father, it’s ultimately in 2003’s ‘JSA: All-Stars’ #3 that she embraces the next step of her heroic journey by officially taking on the mantle of Stargirl. 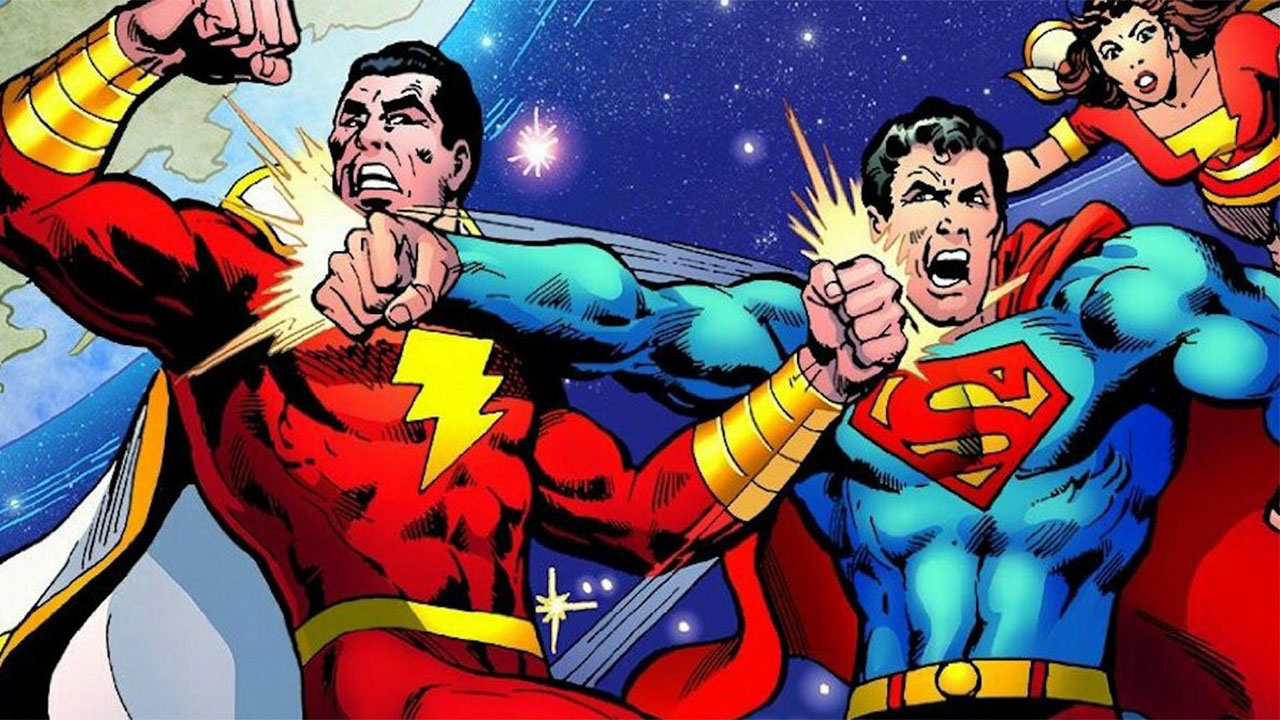 “Who flew first… SUPERMAN, or THE ORIGINAL CAPTAIN MARVEL?”

As Captain Marvel, Billy Batson first took to the skies in ‘Whiz Comics’ #5, soaring from New York to Chicago to San Francisco in record time to take down a national crime ring with cells across America. The cover date of this issue is June, 1940 — and keeping in mind the common industry practice of pre-dating publications by about two months, it’s safe to say that the DC Super Hero now known as Shazam first flight took place in April of 1940.

Now, according to popular belief, Superman didn’t make the transition from leaping to levitation until Fleischer Studios’ world-famous animated ‘Superman’ shorts… which began their run in movie theaters in October, 1941.

However, while these Superman cartoons played a monumental role in molding the Man of Steel into the icon he is today, it would be incorrect to attribute the production with Superman’s first flight. That honor belongs to another medium, one quite popular during the era of Superman’s inception: the radio.

In February of 1940, the ‘Adventures of Superman’ radio serial was first broadcast across the airwaves to thousands of freshly-minted fans of the nascent superhero genre. And in the very second episode—on Valentine’s Day, no less—Superman flew through the air for all the world to hear.

Coincidentally, February of 1940 also happens to be the cover date of ‘Whiz Comics’ #1, the very first appearance of Captain Marvel. So as history would have it, Billy Batson had barely spoken the word “Shazam” for the first time before we were already looking up in the sky.

And now, the time has come for yours truly to take flight until next week’s column. Whether it’s magic or aliens, crises or codenames, or the origins of a super power on your mind, you’ll believe a man can answer -- all you have to do is ASK...THE QUESTION.