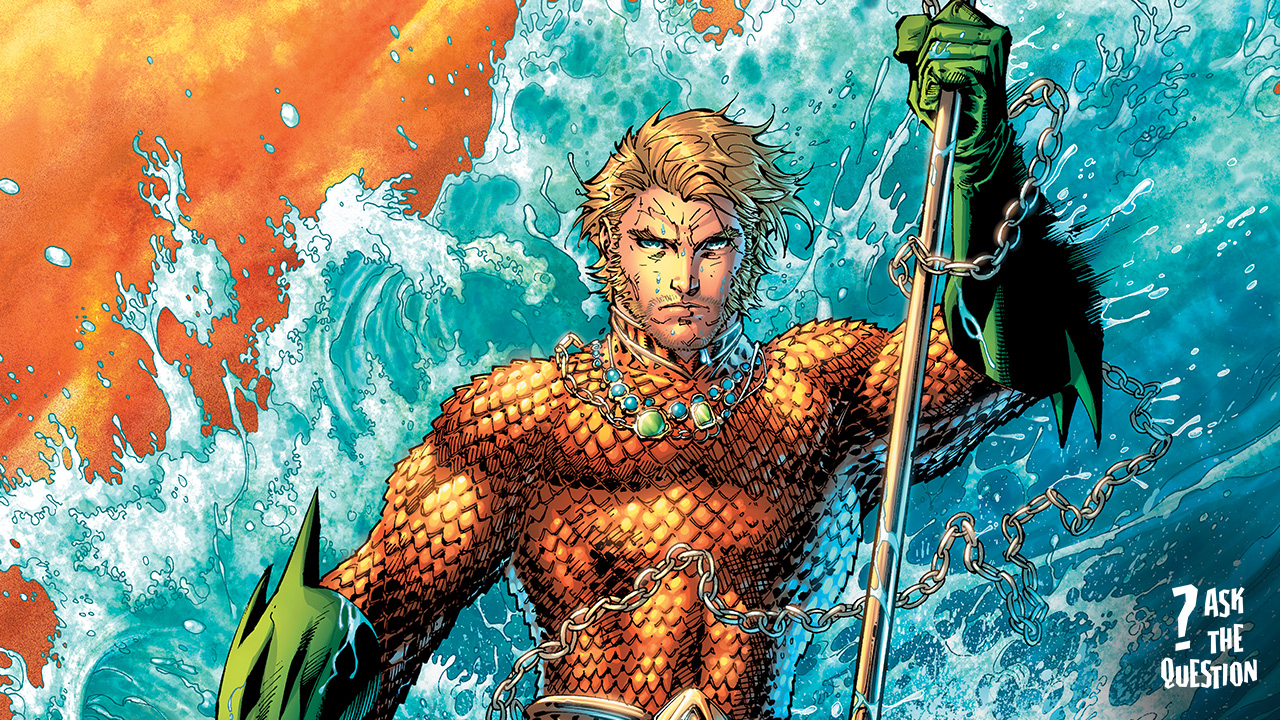 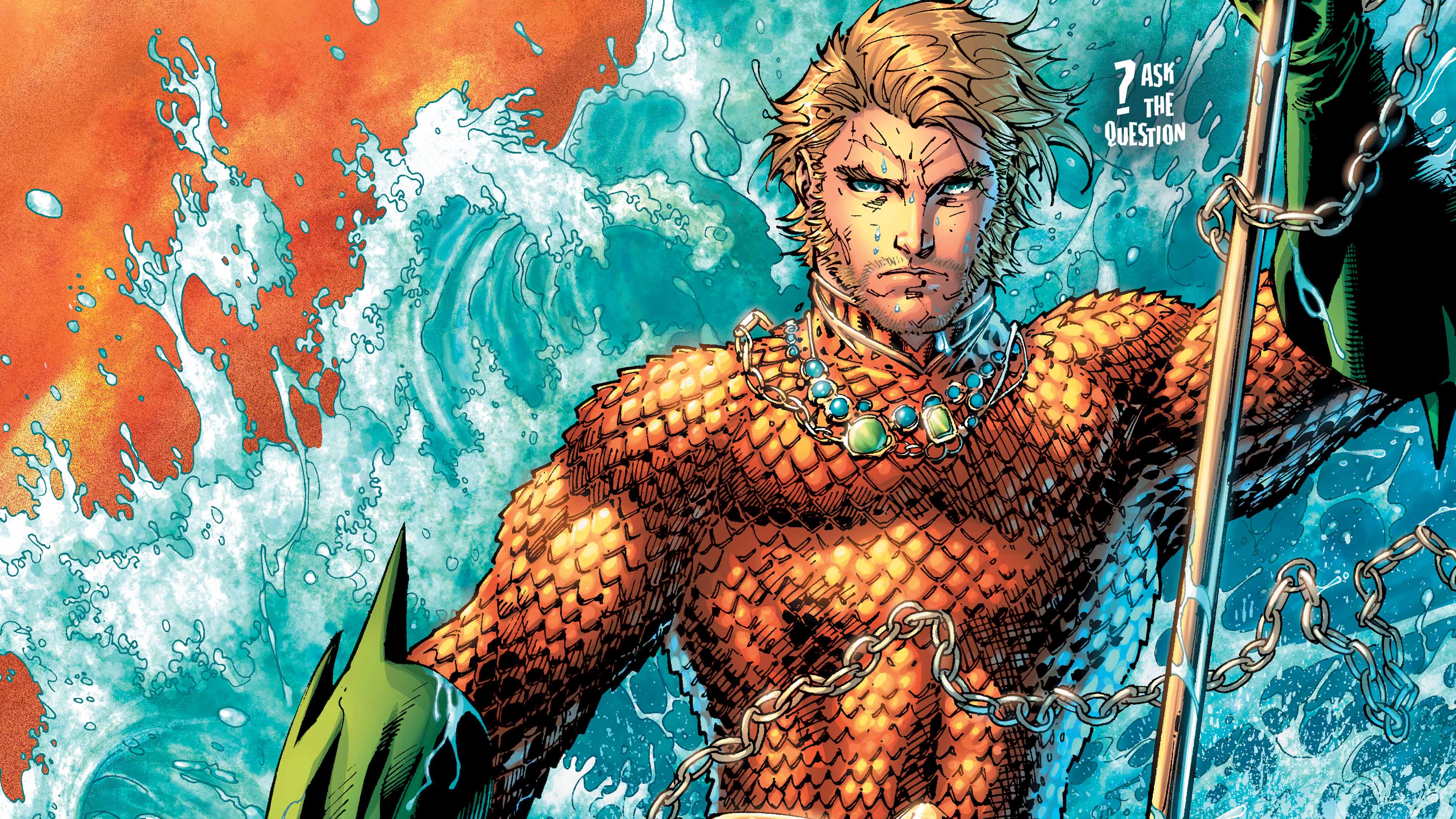 BY THE TIME I GET TO FELIX 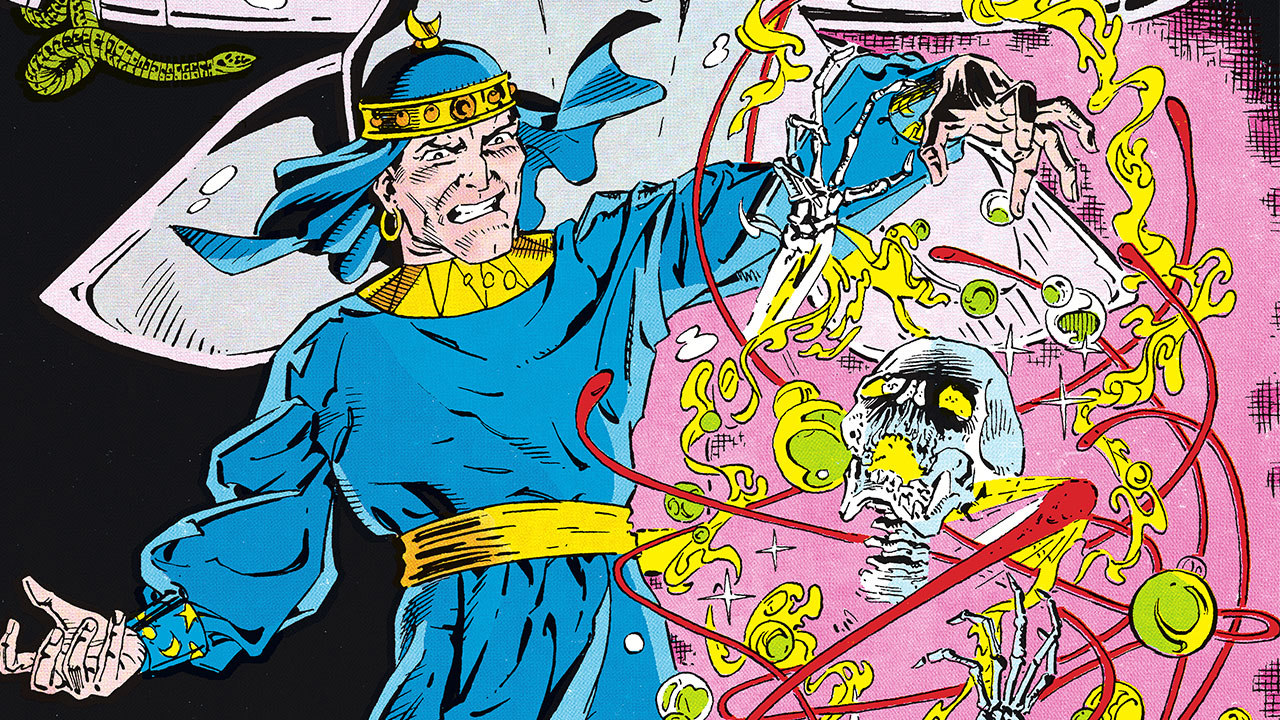 What's a good comic to read to learn more about Felix Faust?”

One of the running themes of magic in the DC Universe is that it often comes with a terrible price. And perhaps none are so cavalier when it comes to the toll for grand mystic power as the ancient sorcerer Felix Faust. Irresponsible? Undoubtedly. But Faust’s lack of discretion is what makes him as destructive to others as he is to himself.

Maybe the best place to start with Felix Faust is the very beginning: with his first appearance in ‘Justice League of America’ #10. In this story, Faust magically manipulates the Justice League into collecting the necessary artifacts to summon the powerful Demons Three into the mortal realm. But though he exerted control over the League’s bodies, Faust found himself unable to control the mental powers of Martian Manhunter and Aquaman, which ultimately led to his undoing — the first of many oversights in his many master plans.

After that, you may wish to consult the 1993 ‘Outsiders’ series, which introduces us to Felix Faust’s son, Sebastian. In the most personal tragedy/comedy in Faust’s long history of plans gone awry, we learn that Felix Faust traded the soul of his own son for immeasurable power. But due to a vagary in the contract, it was Faust’s son who ended up with the power instead of Faust himself. Sebastian’s outstanding issues with his father as a result of this misunderstanding are a running theme of the series.

The most epic of Felix Faust’s stories comes in the ‘52’ limited series, where Ralph Dibny ventures into Hell and views Faust’s horrifying life story as a cautionary tale, regarding the magic he seeks for his own purposes. But as Ralph’s descent and desperation increases, the hand of Faust casts an ever-darkening shadow over the events of his life. Felix Faust’s saga continues from ‘52’ when he finds another desperate soul ready for a bargain in ‘Black Adam: The Dark Age.’

But if you’d like to see a more recent take on the character, look no further back than ‘Justice League Dark’ #9. As one of the earliest foes of the Silver Age Justice League, who could be better cast to antagonize the mystically focused Justice League Dark than Felix Faust? This version of Faust is just as desperate as any other in his quest to obtain power at any price. But unlike his costly mistake in ‘Outsiders,’ the Felix Faust of ‘Justice League Dark’ has perfected the art of passing the cost of magic onto those around him. Can Constantine, Zatanna, and the rest of the team stop Faust on his quest for ultimate power, or do they only become stepping stones towards his dark purpose? You’ll have to read the series to find out. 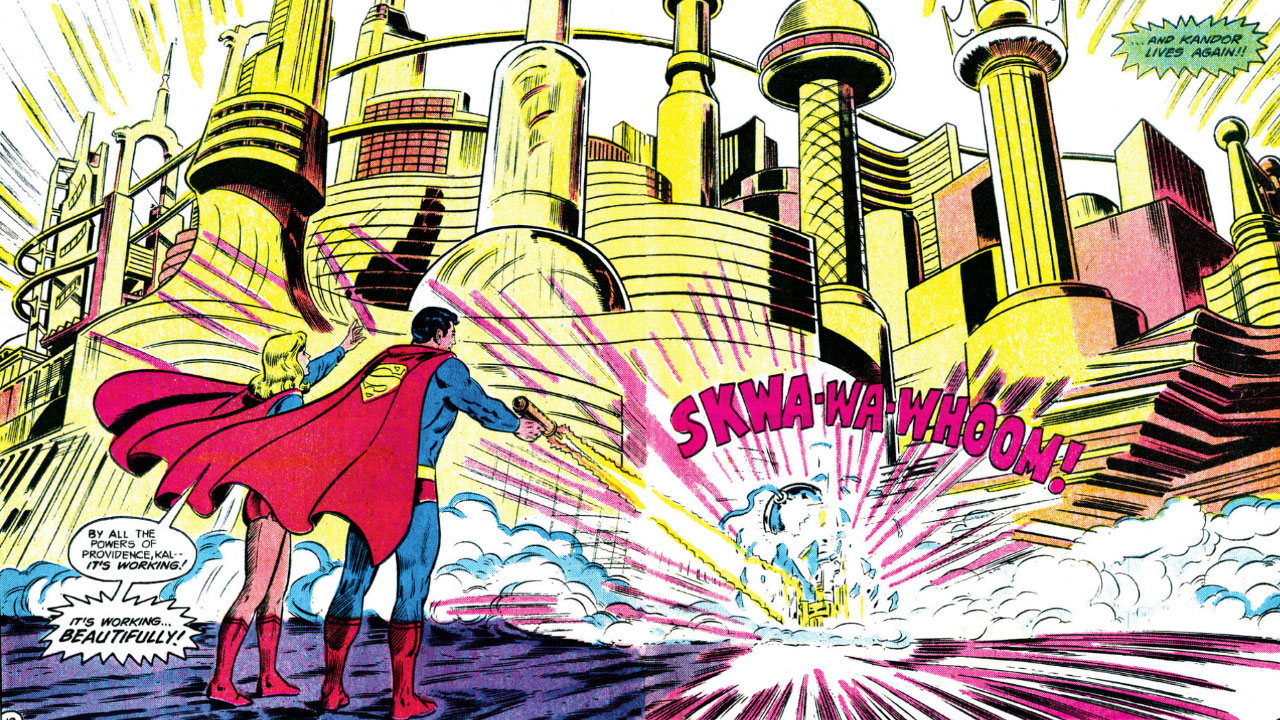 This week I have some questions about Kandor. Has the shrunken Kryptonian city ever been returned to a normal size either in comics or anywhere else? If so, what was the secret to returning it back to normal?”

For much of Superman’s career, the bottled city of Kandor has stood in the Fortress of Solitude as a tangible symbol of hope itself. A problem which, if someday solved, could mean the true return of Kryptonian culture to the universe. It represents a promise that even the greatest of tragedies may someday be reversed. It stands to reason, then, that writers would be tempted to see this storyline through to its happy conclusion; after all, Superman is all about achieving the impossible dream. I can think of no fewer than four occasions throughout DC history where the former capital of Krypton was restored to its full size and splendor:

1) ‘Superman’ #338, “Let My People Grow!” (1978) — For this special anniversary issue, DC and writer Len Wein celebrated Superman’s 40th in a big way: by embiggening Kandor itself. In this issue, Krypton’s last survivors Superman and Supergirl harness an active supernova to empower an enlarging ray that would restore Kandor to its former size. Unfortunately, the Kandorians soon discover that the effects of the ray only prove permanent on organic matter, forcing them to rebuild their society from scratch. The liberated people of Kandor go on to colonize the planet Rokyn, which appears a number of times through the 30th century adventures of the Legion of Super-Heroes.

2) ‘Superman: New Krypton’ (2008) — One major change made to Superman’s history after ‘CRISIS ON INFINITE EARTHS’ was the restoration of Superman’s status as the last survivor of Krypton, eliminating cousins and miniaturized cities alike from his retinue. But in the 2008 "Superman: Brainiac" storyline, the miniaturized Kryptonian city appears once more after a long absence, as part of Brainiac’s collection. This version of Kandor is kept bottled via an energy field which keeps it in its miniaturized state — a field which is disrupted in the climactic battle between Superman and Brainiac, restoring the people of Kandor and their city to full size. Much of the Superman comics of the late ‘00s concern the fallout of this new development, ultimately culminating in 2010’s ‘War of the Supermen.’

3) 'Batman: The Dark Knight Strikes Again’ (2001) — I don’t know about you, but when I first heard that one of Superman’s stickiest problems was figuring out how to re-enlarge a miniaturized city, the first solution that came to my mind was, “Why not call the Atom?” After all, if the Atom could create a belt which can alter his own size at will, surely he could help develop similar technology for the people of Kandor. Well, it turns out that in Frank Miller’s 'Dark Knight' saga, that’s exactly what happens. In this dark future of the DC Universe, we learn that Lex Luthor is able to manipulate Superman by keeping Kandor as his hostage. But this dangerous status quo is disturbed when Supergirl, pretending to be Luthor’s pawn, sneaks the Atom into the bottled city in order to liberate it from his wicked grasp. This turn of events would prove to have unforeseen consequences of its own in Miller’s follow-up story, ‘The Dark Knight III: The Master Race.’

4) ‘Legion of Super Heroes: Message in a Bottle' (2007) — A thousand years after the abduction of Kandor, Legion of Super-Heroes member Brainiac 5 repays a debt to Superboy by using his ancestor’s technology to restore Kandor on a reformed planet Krypton. Sadly, in order to preserve the timeline, Brainiac 5 is required to wipe Superboy’s memory of this action so that he may not know the final fate of the Kandorian people he failed to save within his own time. Nobody ever said being a Legionnaire was easy. 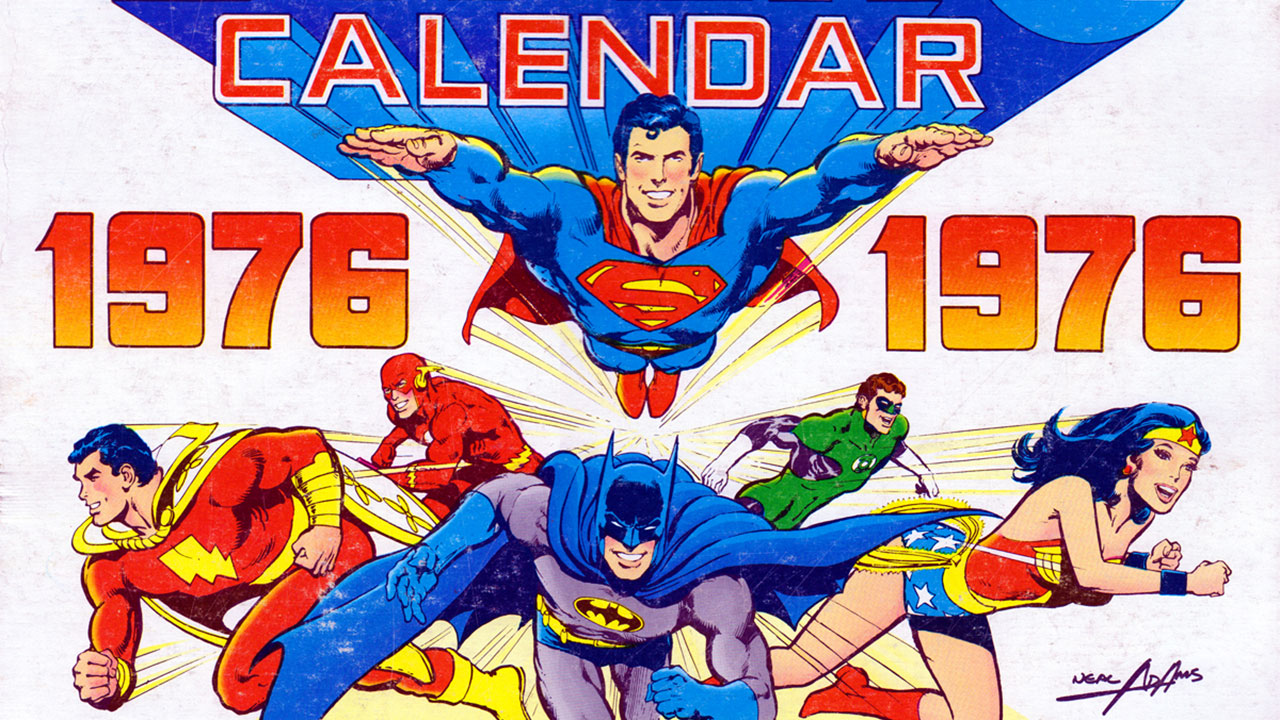 “What day is Aquaman’s birthday? What’s his astrological sign?”

Excellent question, David Gallaher, writer of ‘Convergence: Green Lantern Corps'! Due to the elastic nature of the DC Universe’s timeline, official dates are rarely if ever pinned down within the comics themselves. But for determining when to celebrate a DC character’s birthday, there is one valuable published resource to which we may turn : the 1976 “Super DC Calendar.” Along with standard holidays, this Bronze Age artifact displayed the birthdays of practically every major DC character at the time. Using the data from this ancient, sacred text, we can determine the astrological signs of not just Aquaman, but a significant portion of the DC Universe. Here’s a selection of characters you can find under each star sign. (Aquaman, naturally, is an Aquarius.) 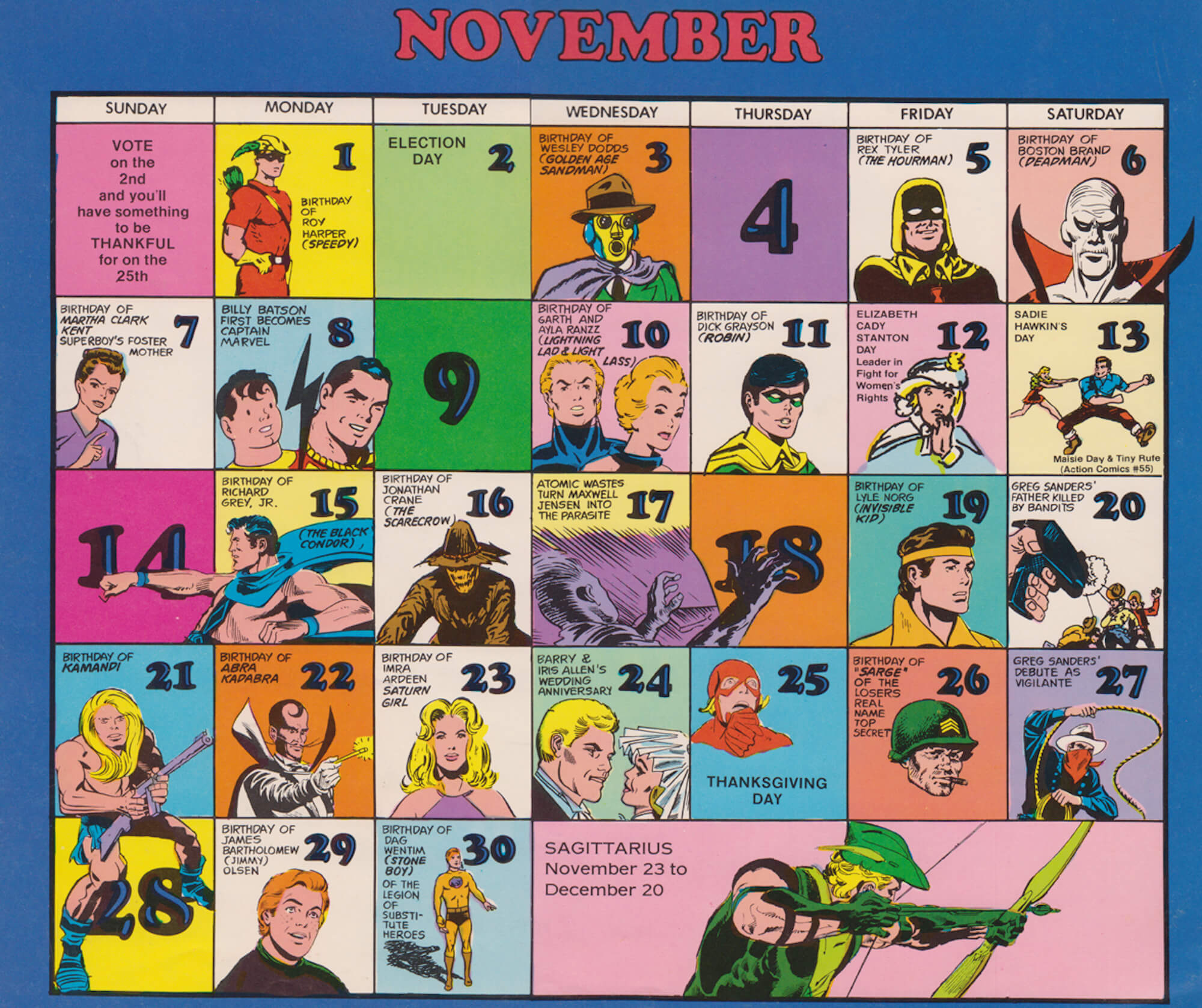 But when it comes to the mysteries of the DC Universe, you need not look to the stars for answers. I will continue to be available at your disposal every week to address your concerns and quandaries. All that’s required of you, my friends, is to ASK...THE QUESTION.