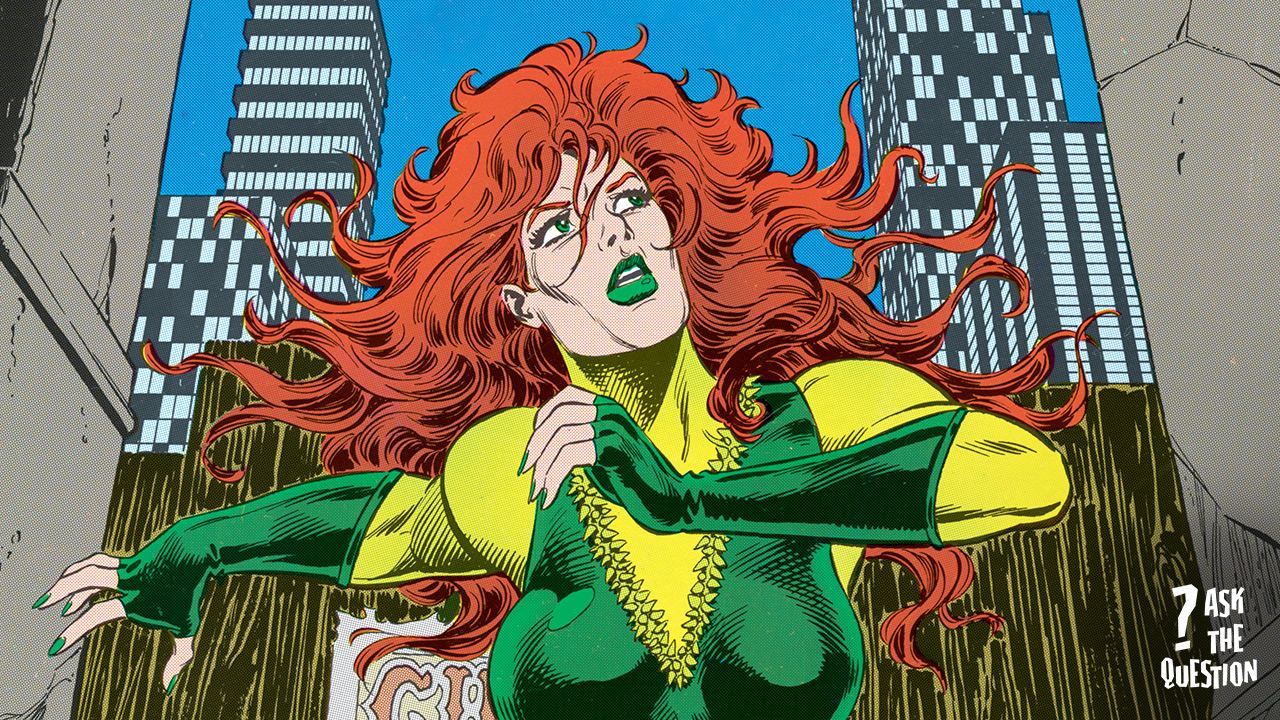 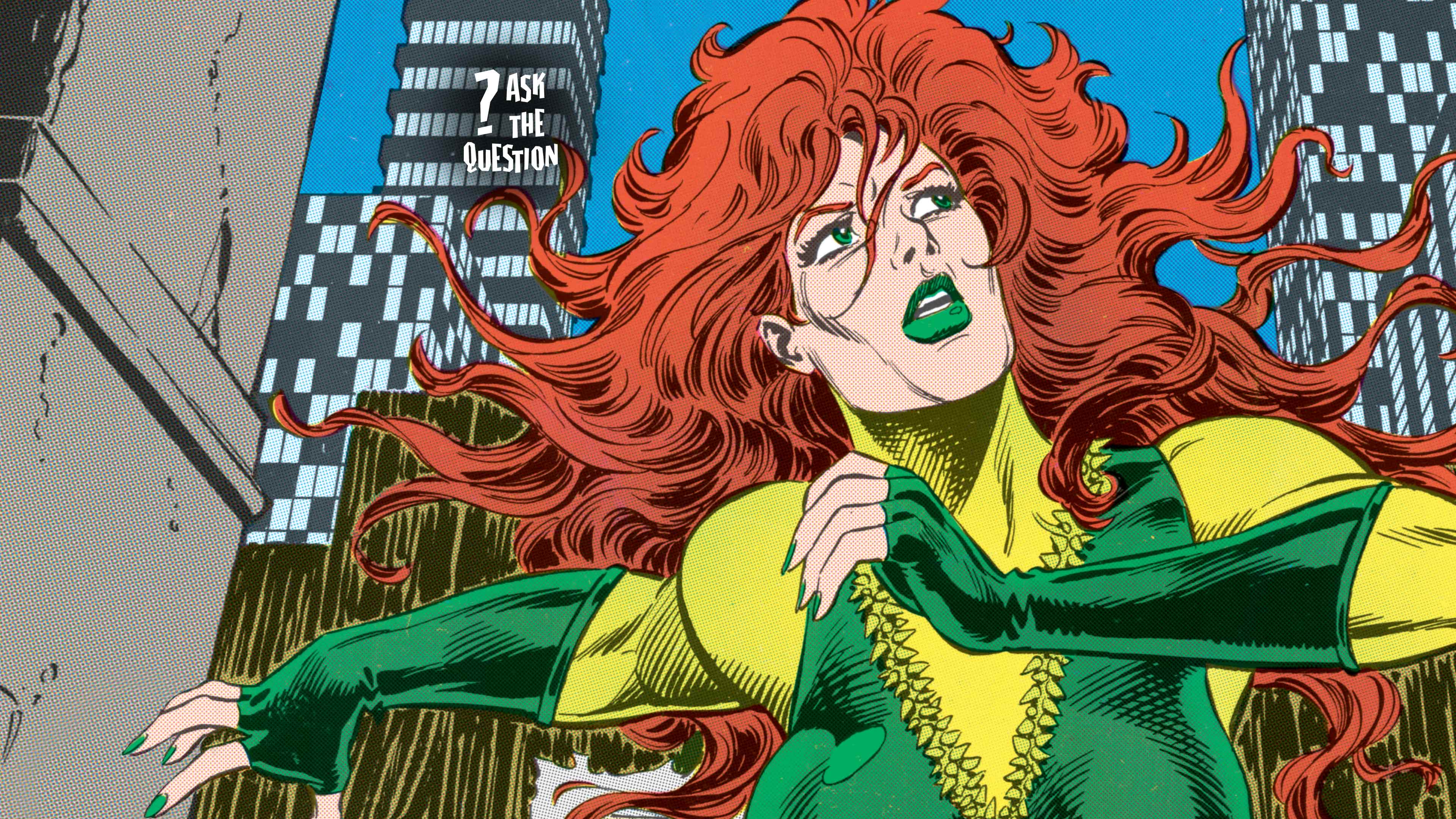 Hello. I’m Alex Jaffe, better known in our Community as @HubCityQuestion. My personal mission: to take on any question you have about the DC Universe -- no matter how granular, obscure, or strange -- and present you with an answer. As a faithful steward of the truth, I’ve returned to you in my capacity to address these inquiries. Should you be interested in getting your own case heard in our next column, you may do so by voicing it in this thread in our Community. And every week, I will be here to address the most intriguing of these cases to the best of my ability. All YOU need to do is ask...The Question.

Every Rose Has Its Thorn 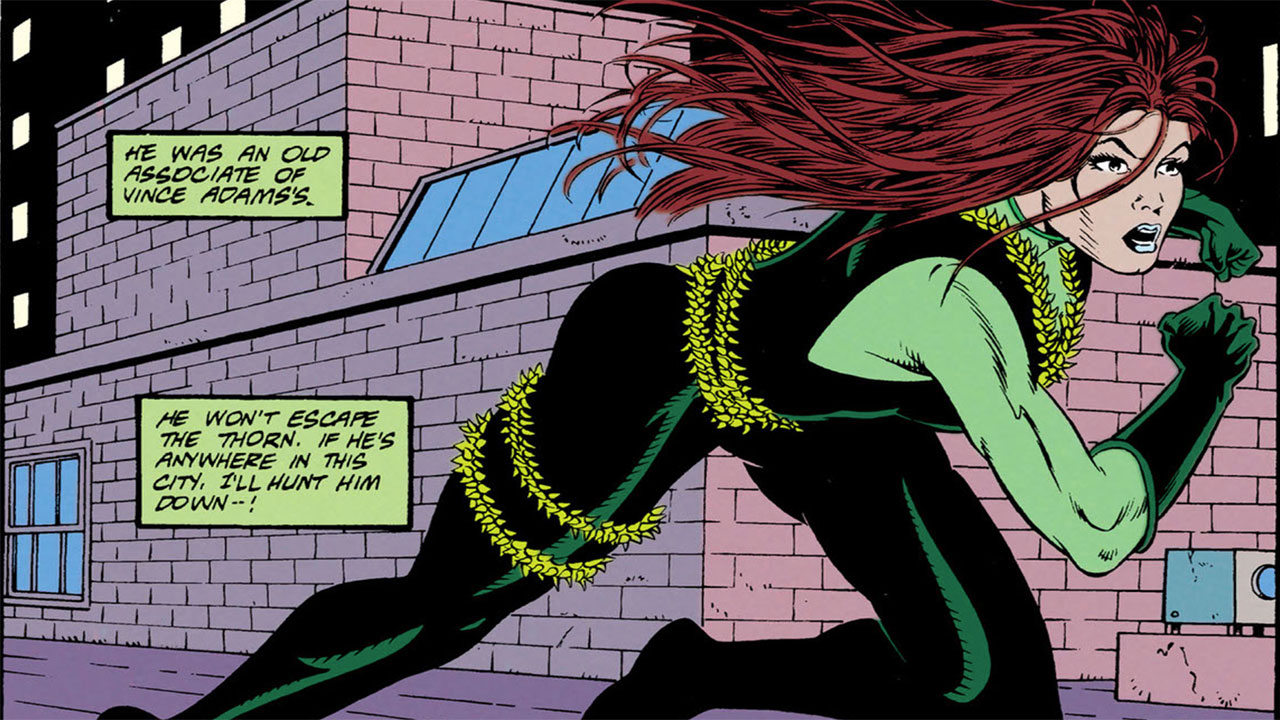 “One of my favorites was Rose and Thorn. As I remember, they first appeared in the Golden Age with Green Lantern Alan Scott. Then years later in the ‘70s they had their own new stories. Has anyone tried to bring them back recently?”

First, I should note that Alan Scott’s Thorn was a separate character from the modern Thorn. Rose Canton, originally a Green Lantern villain, eventually married Scott and had two children with him — Infinity, Inc. members Jade and Obsidian.

The ‘70s run you refer to debuts the Metropolis-based split-personality vigilante Rose Forrest, alias “Thorn,” who first appeared to oppose the underworld gang The 100 in ‘Superman’s Girl Friend, Lois Lane’ #105-130. While The 100 is more associated with Black Lightning today, the gang originally appeared as Thorn’s designated enemies. Who knows? Maybe we’ll see her show up in the TV series next season.

Through the ‘80s and ‘90s, Thorn would continue to oppose them in other Metropolis-based books even as they swelled their numbers to The 1,000, perhaps most notably in early issues of ‘Booster Gold’ and her own two-part story in ‘Showcase ‘95.’

Rose went on to make an appearance in Chuck Dixon’s run on ‘Green Arrow,’ working with Black Canary in her flower shop, “Sherwood Florist.” And when Harley and Poison Ivy move to Metropolis in Harley’s first solo series, Thorn makes it her business to become a, well… thorn in their side.

In 2004, then relatively new DC writer Gail Simone was given the opportunity to revitalize Rose and Thorn with a darkly psychological miniseries. Eight years later, for the New 52, a similar attempt was made in the ‘National Comics’ anthology series, with a one-shot appearance written by Tom Taylor.

More recently, Thorn appeared as a supporting character in Poison Ivy’s first limited series, ‘Poison Ivy: Cycle of Life and Death.’ And for those up to date on ‘Event Leviathan,’ Thorn is on the scene in the most recent issue of ‘Action Comics,’ where Leviathan themself makes her an enticing offer. 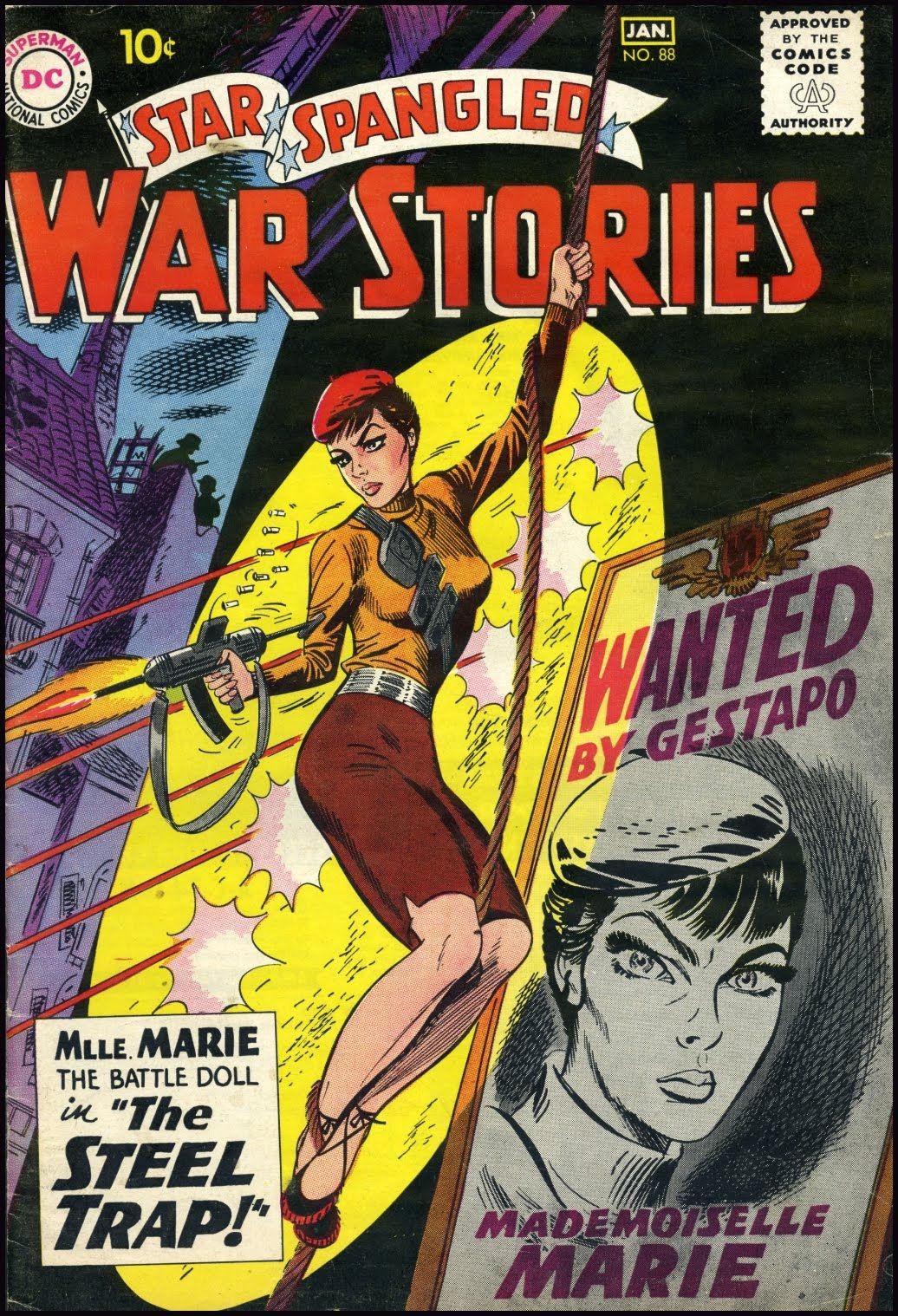 “Since the Tour de France started this week, I’m wondering: who are the most famous/infamous/recognizable French Super Heroes/Super-Villains in DC history?”

In my research for this case, I encountered no fewer than 108 significant French characters throughout the DC multiverse. In honor of this auspicious event, I’ve assembled a list of the top eight: enough to form a standard cycling team in this historic race. To determine “recognizability,” I eliminated all civilians (sorry, Justice League liaison Catherine Cobert), and all characters who have never been represented outside of the comics medium. I then cross-referenced that list with their number of appearances across all media. Here are my findings:

8.) André LeBlanc — A thrillseeker with his eyes on the title of “the world’s greatest jewel thief,” LeBlanc only made one appearance in the original ‘60s ‘Teen Titans’ run. But he makes this list because he was one of just three Silver Age Teen Titans villains to appear in the ‘Teen Titans’ animated series, and appears yet again in ‘Batman: The Brave and the Bold.’

6.) Henri Ducard — Ducard doesn’t make too many appearances in the comics, but his impact looms large. A French detective by day and mercenary by night, Ducard was one of Bruce Wayne’s mentors in his original quest to gain the skills necessary to become the Batman. Ducard was created by Sam Hamm, screenwriter of the 1989 ‘Batman’ film, in the comic book storyline ‘Blind Justice.’ But movie fans will recognize the name best as the alias used by Liam Neeson’s character in ‘Batman Begins.’

5.) Mademoiselle Marie — As revealed in ‘Checkmate,’ Mademoiselle Marie is a title given to the top female operatives in the French spy network, dating back to the French Revolution. Over the years, Mademoiselle Marie has been the only woman Sgt. Rock has ever loved, the mother of Alfred Pennyworth’s daughter Julia, the Black Knight of Checkmate, and -- in ‘Justice League: The New Frontier’ -- an agent of King Faraday.

6.) Madame Rouge — The only female member of the Brotherhood of Evil, Madame Rouge was originally French actress Laura De Mille. But her fate changed when a nearly fatal car accident left her with a split personality.  As Madame Rouge, she underwent a series of experimental surgeries to grant her elastic, shapeshifting, and super agile abilities all in the name of defeating the Doom Patrol. But as De Mille, she pursued a complex romantic relationship with the Doom Patrol’s Chief, Dr. Niles Caulder. As an operative for the Brotherhood of Evil, Madame Rouge plays a significant role in season 5 of ‘Teen Titans’ (albeit with a more Eastern European flavor).

3.) Crimson Fox — As part of Justice League Europe, the true identity of the pheromone-controlling Crimson Fox was actually a set of twins who traded off with one another: Constance and Vivian D’Aramis. The D’Aramis twins were the CEOs of Revson, a high-end perfume company based in Paris. Although identical to one another, readers could tell the twins apart through Vivian’s more pronounced, phonetically spelled French accent. Crimson Fox was also featured as a recurring character in 2017’s DC Universe-based sitcom, ‘Powerless.’

2.) André Blanc-Dumont — HAWK-A-A-A! Wherever the sky-roving Blackhawks cast their shadow over evil, this French team mechanic, gadgeteer, demolitions expert, and lover of ladies is never far behind. Though he hasn’t been seen too much recently, Blanc-Dumont was a ubiquitous presence throughout DC’s war comic line of the ‘50s and ‘60s. André made an appearance in the three-part ‘Justice League’ TV episode “The Savage Time,” set during World War II -- and will most likely be featured in the Steven Spielberg-directed ‘Blackhawks’ movie announced last year.

1.) The Brain & Monsieur Mallah — The top spot on this list is a tie, because it simply wouldn’t be right to break the Brain and Mallah apart. (And if we’re to extend our bicycle team comparison, only one of them has the legs to pedal.) Two of the most dogged enemies of the Doom Patrol, the Brain, an evil genius whose existence has been reduced to a brain in a jar, and Monsieur Mallah, his devoted super intelligent ape companion, are the masterminds behind the nefarious Brotherhood of Evil. Together, these two unlikely life partners seek vengeance against the Doom Patrol’s Niles Caulder, once The Brain’s chief scientific rival. In addition to antagonizing the Doom Patrol in the comics, Brain and/or Mallah have made appearances as antagonists in ‘Teen Titans,’ ‘Batman: The Brave and the Bold,’ ‘Young Justice,’ and even in DC Universe’s own ‘Doom Patrol’ as the Brain’s alter ego, Ultimax. 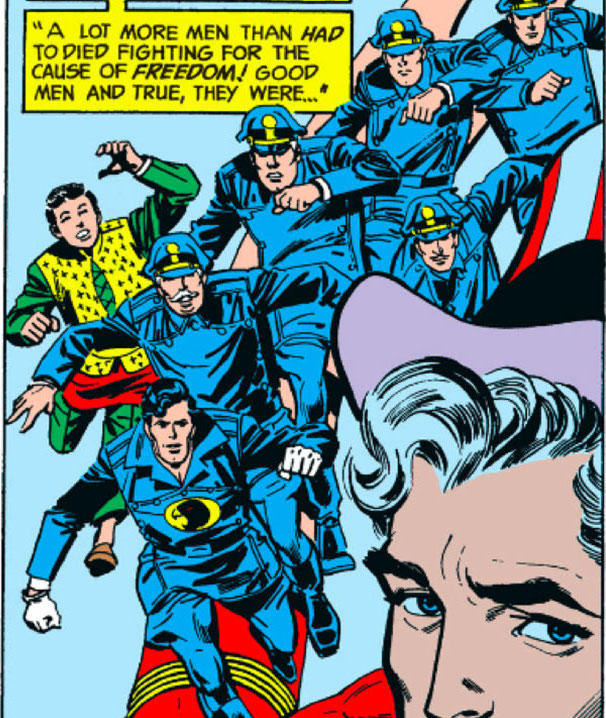 “In the JLA/Earth-X crossover you mentioned in the July 4th article, a panel that showed fallen Quality Comics heroes included Plastic Man, the Blackhawks, and some guy in a green shirt.  Who was that last guy, and do you know when the others were retconned (or handwaved) back into existence?”

Oh. That would be… well… you see, not too many mainstream comics in the ‘50s were very culturally enlightened. This green-shirted fellow is in fact another member of the Blackhawk Squadron, one who traditionally eschewed the regular uniform for more traditional Chinese garb. The Blackhawks were a team comprised of representatives from nations suffering under Axis occupation, and to leave China out of such a group would be a glaring historical omission… though, admittedly, his inclusion is one that the creative team at the time could have treated with more respect. His real name is Wu Cheng, but his more popular nickname is borderline unprintable today. Thankfully, since ‘Crisis on Infinite Earths,’ Wu Cheng has appeared in standard Blackhawk uniform with the rest of the team.

But to address your second question: Plastic Man’s debut in the Bronze Age of the DC Universe would come two years later, in a team-up with Batman and Metamorpho for ‘The Brave and the Bold #123.’ His own series then returned in 1976 after an eight-year hiatus with ‘Plastic Man #11,’ featuring the all-new adventures of the Eel O’Brian of Earth-One.

As for the Blackhawk Squadron, the team continued to appear in their own long-running, ongoing series both before and after this crossover, Wu Cheng and all. Unlike Plastic Man, who’s generally depicted as a modern hero, the Blackhawks are traditionally kept within the confines of World War II with modern incarnations few and far between. ‘Crisis on Infinite Earths’ would be the first time the Squadron got mixed up in the goings-on of the modern DC Universe, as all of time was folding in on itself.

And speaking of time, that’s all of it we have for this week. If you’d like to know more about DC’s wild, weird, and wonderful universe, stop by my office in our Community at any time. This weary world of ours may break your body and bind your spirit, but at least you can always ask…The Question.