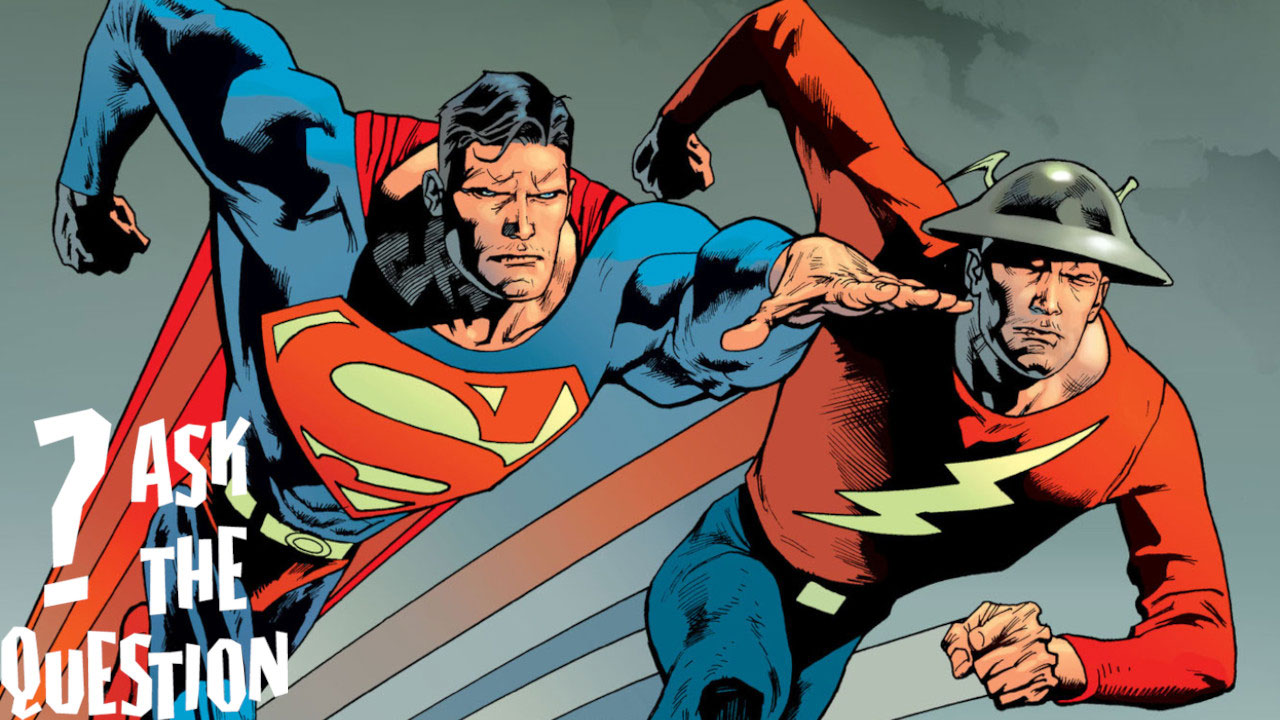 Our resident expert takes on any question you have about the history of the DC Universe.

Hello. I’m Alex Jaffe, better known in our Community as HubCityQuestion. My personal mission: to take on any question you have about the DC Universe -- no matter how strange, granular, or obscure -- and present you with an answer. As a faithful steward of the truth, I offer my time in this weekly column to address these inquiries. If you’d like to submit one of your own, you can stop by my office at any time in our Community to state your case, each of which I will in time address to the best of my ability. Let’s clear the docket! 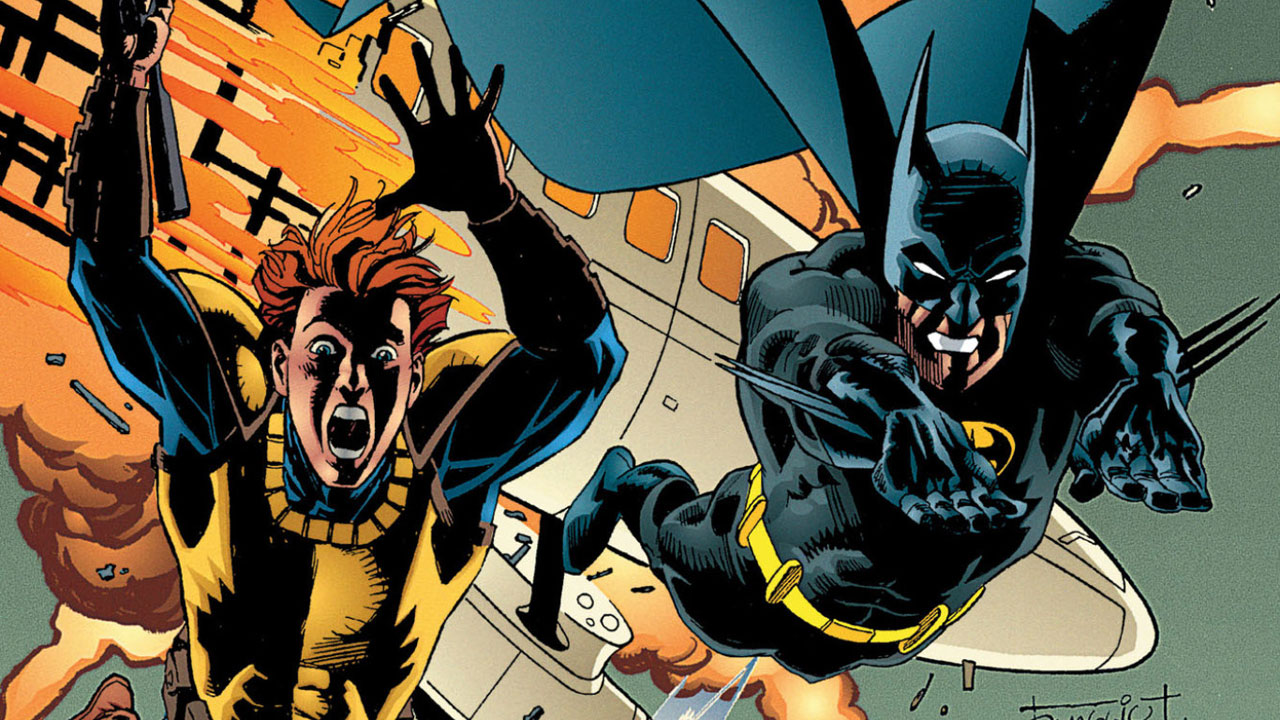 “Hey Ques. I have a question you for you that I tried to find on my own but am not sure of my answer. Have there been, in DC’s history other team-up books beside Brave and the Bold and DC Presents? Has Flash or a Lantern or anyone had a book that had them teaming up with different heroes each issue? Or just a different people every issue team up like BatB was between its beginning and being the Bat Book.” -bd1

DC’s published many team-up books over the years, usually between Batman and Superman themselves. WORLD’S FINEST, SUPERMAN/BATMAN, and even SUPER SONS all come to mind as manifestations of the power of a two-man team. But books like DC PRESENTS and BRAVE AND THE BOLD feature rotating casts, with either one anchor character or a lineup that frequently changes up the entire dynamic. There are quite a few series which fit these criteria as well, but most of them, with few exceptions, were rather short-lived.

We’ll start with a softer example. While by no means a consistent rule, the intergalactic bounty hunter Lobo tends to prefer the miniseries over the ongoing format. As often as not, these irregular limited runs often feature a costar from the DC universe, including Deadman, Etrigan, and Hitman.

From 1996 to 1997, DC published a series of oneshot team-up comics in the “Plus” line, uniting two heroes who usually didn’t get to work together on an unlikely adventure. These included such titles as BATMAN + ARSENAL, SUPERBOY + SHAZAM!, WONDER WOMAN + JESSE QUICK, GREEN LANTERN + THE RAY, CATWOMAN + SCREAM QUEEN, and of course, AZRAEL + THE QUESTION.

December of 1997 also brought us DOUBLE-SHOT, a series which paired a young hero who at the time carried their own solo book with one of the less prominent members of the post-Zero Hour incarnation of the Teen Titans. This included ROBIN/ARGENT, SUPERBOY/RISK, SUPERGIRL/PRYSM, and IMPULSE/ATOM.

Then, in March of 2000, SINS OF YOUTH featured a new duo in each issue of a special crossover event where, thanks to Klarion the Witch-Boy, the ages of DC’s heroes and their sidekick counterparts had all been swapped.

Later, in October, the story arc of GREEN LANTERN: CIRCLE OF FIRE teamed up Green Lantern Kyle Rayner with a different hero in each issue, including Adam Strange, The Atom, Firestorm, and Power Girl.

In May of 2002, a line of comics under the banner of “DC FIRST” was published, with a unique gimmick: each issue, whether the subject was a hero and a villain, or two heroes, would be the story of the first time they met. Only four issues were released, but the BATGIRL/JOKER oneshot lives on as essential reading for any Cassandra Cain fan.

2007’s OUTSIDERS: FIVE OF A KIND bridged the gap between Judd Winick’s OUTSIDERS series and the BATMAN AND THE OUTSIDERS comic to follow, by teaming up a different member of Winick’s Outsiders in each issue with a more established hero to test their mettle for Batman’s new team.

Crossover collections such as DC MEETS LOONEY TUNES and DC MEETS HANNA-BARBERA also come to mind, as each issue teams up one particular hero with an animated counterpart from the Warner Bros. catalogue.

One of the most successful recent implementations of this formula was the 2016 series HARLEY’S LITTLE BLACK BOOK, a highlight of the character’s run by friends-of-DC Universe Amanda Conner and Jimmy Palmiotti. Every issue in this series teams up Harley Quinn with another unlikely co-star, from “Superman v. Muhammad Ali”-era Superman to the DC Comics Bombshells.

But there are two titles which took the idea of the rotating team-up book to a new level I feel must be mentioned here: SUICIDE SQUAD, and its spiritual successor, BIRDS OF PREY. First envisioned by John Ostrander and Kim Yale, SUICIDE SQUAD was a team-up comic where the discarded Villains of the Week from DC’s other titles could find new life working with each other in a brand new function, further deepening their characters while they fought for their lives. Many forgotten characters, from Bronze Tiger to Captain Boomerang, were rehabilitated in the public eye thanks to the Squad, but perhaps none experienced so great a rise as Barbara Gordon, reborn as Oracle after getting shot by The Joker years prior in THE KILLING JOKE. From SUICIDE SQUAD, Oracle would go on to form her own rotating team of operatives, the BIRDS OF PREY--usually anchored by her stalwart field captain Black Canary.

UP AND AT THEM 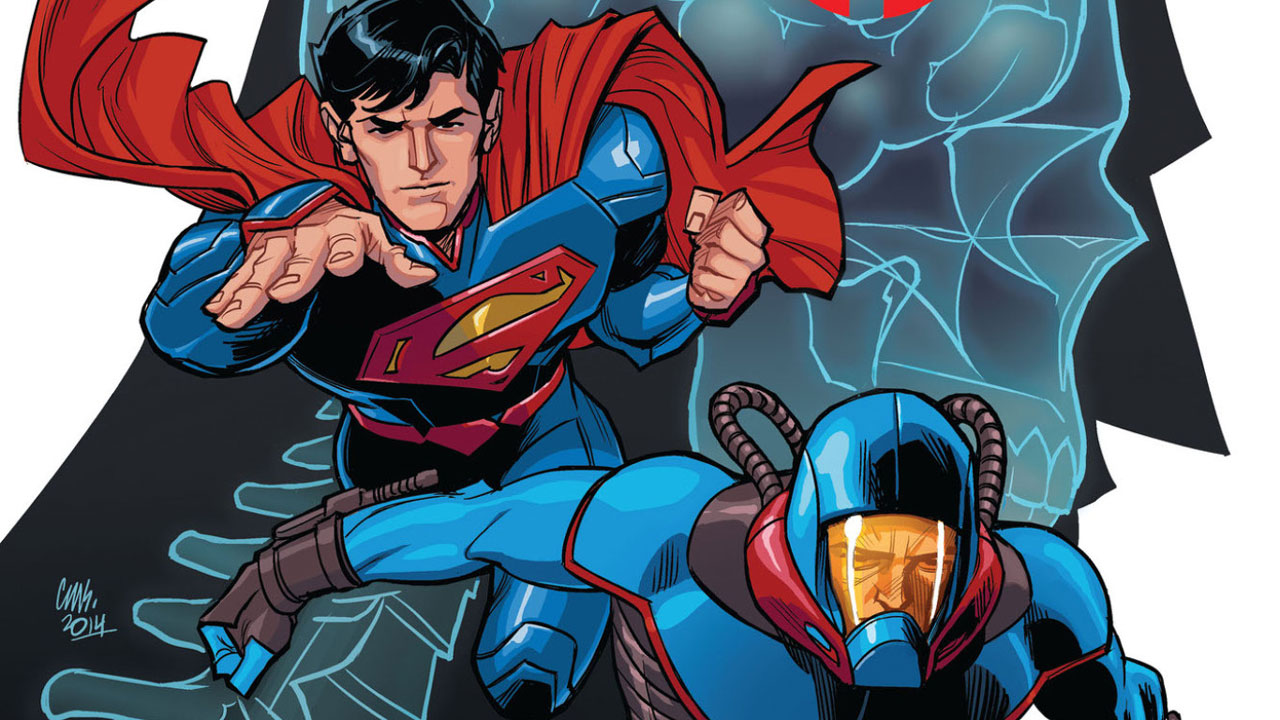 “When did The Atom first wear a Clear Mask, rather than the original design? Was it in the comics or was it on the TV show Legends?” -Pearl031114.29871

Before he was shipped off to Legends of Tomorrow, The Atom’s clear faceplated exosuit was developed for his story arc in Season 3 of Arrow. It first appeared on-screen in the episode “Left Behind,” which aired on January 15th, 2015–but it had most certainly been in production for a while leading up to that point.

Ray Palmer first appears in a clear faceplated exosuit in BATMAN/SUPERMAN #10, which was released in May of 2014. So while this happened first in the comics, it was likely a situation of it appearing on page while it was in the process of being crafted for television.

This sort of thing happens all the time when it comes to redesigning characters for appearances in other media, the most famous example of this disparity probably being the Barbara Gordon incarnation of Batgirl, who made her comic debut in 1967–but only because she was being developed for a television appearance at the time, which would debut in the 1968 third season of Batman on TV.

So, while The Atom had that design in the comics first, it was almost certainly drawing inspiration from a design for TV which had yet to air. It should also be noted that this early instance was a solitary one, for a story about the Ray Palmer of comics’ “Earth 2.” The Atom wouldn’t go on to regularly wear a clear faceplate in the comics until Ryan Choi would do so for his Rebirth-era appearances in 2017’s JUSTICE LEAGUE OF AMERICA. Since then, Ray Palmer has reverted to his traditional cloth mask. Which works as a signifier between the two, at any rate--while both Palmer and Choi operate as The Atom in the DC Universe, the presence of the cloth versus the clear plating is an easy visual indicator for telling them apart. 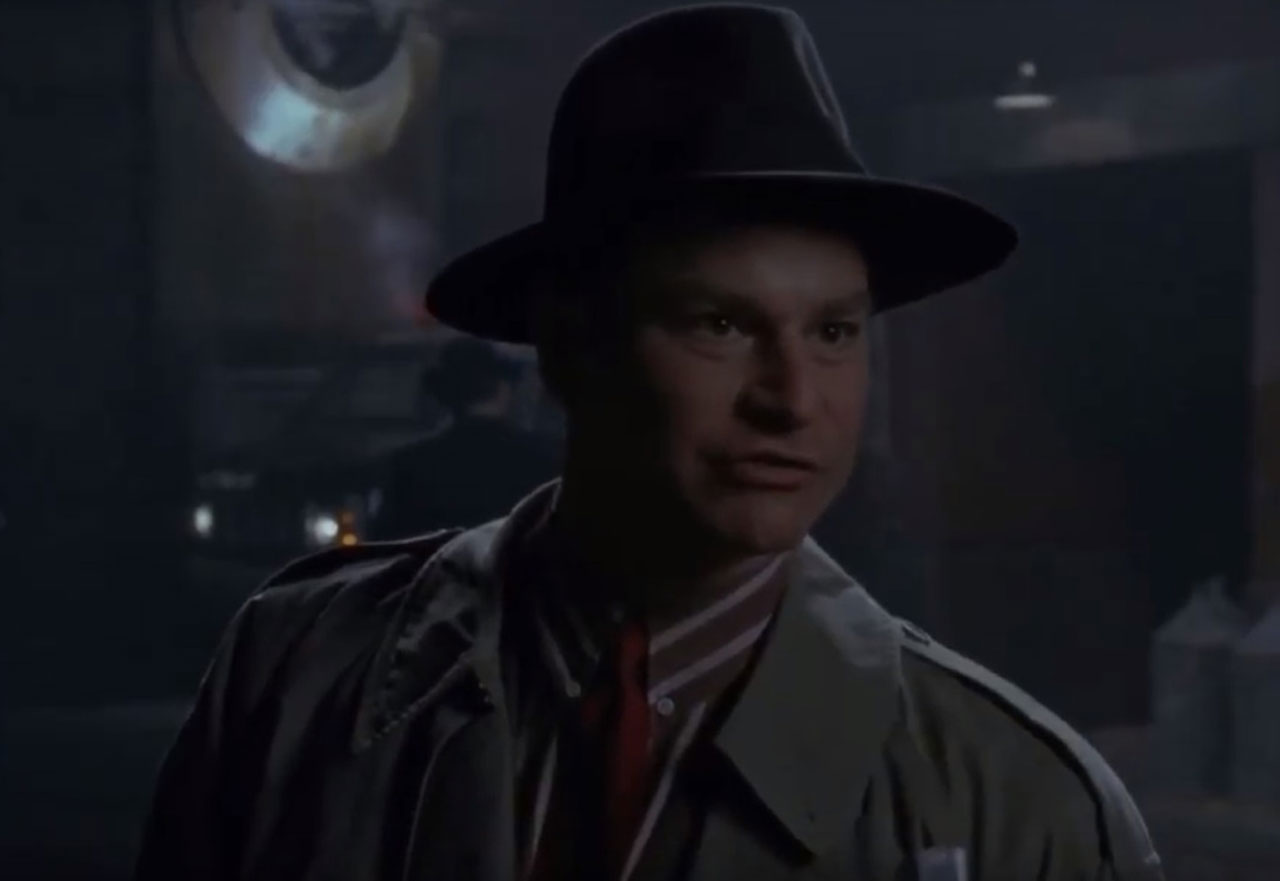 “Hello @HubCityQuestion, with the characters’ popularity, why don’t we see people from a movie like Alexander Knox and Max Shreck in DC Comic books?” -Reaganfan78

Perhaps you’ve seen a disclaimer similar to this one in the past, at the end of a film or television show before:

“This is a work of fiction. Names, characters, places and incidents either are products of the author’s imagination or are used fictitiously. Any resemblance to actual events or locales or persons, living or dead, is entirely coincidental.”

This is a legal phrase included in most entertainment productions, to protect the creators from libel or defamation suits from people who can claim a resemblance or connection to fictional characters depicted in the work. Many entertainment companies employ a “clearance” department for this reason, to ensure that when a new name is put into a work, it either isn’t shared with any real person, or if necessary can be negotiated with parties who share that name for usage (though that latter case is often more trouble than it’s worth).

It’s not entirely unheard of, of course, for a DC character from outside the comics to make the jump into comic book continuity. Harley Quinn famously did it from Batman: The Animated Series, but it was also a feat accomplished decades earlier by Jimmy Olsen, who debuted in the Superman radio serial.

The difference, though, when it comes to busybody reporter Alexander Knox of 1989’s Batman or political schemer Max Shreck of Batman Returns, is that both of their names are borrowed from actual people. Alexander Knox was an Oscar-nominated and Golden Globe-winning actor from the golden age of Hollywood cinema. (As a fan of US presidential history and classic movies yourself, you may know him as the actor who played Woodrow Wilson in 1944’s Wilson.) Max Shreck, meanwhile, was clearly named after Max Schreck, another golden age movie star who most famously portrayed the vampire Count Orlok in Nosferatu. Both names were borrowed by director Tim Burton to lend credence and pay tribute to the film noir inspirations of his Batman duology, but clearing those names for continued use in the comics, when the estates of those actors could get involved in the name rights, is likely too thorny from a legal standpoint than pursuit warrants.

But unlike your typical clearance department with limited time and funds, my own curiosity knows no bounds. You can always count on yours truly to chase down answers wherever they may lurk--with any luck, they might even be correct. Your part in this weekly theatre, as always, is only to ASK...THE QUESTION.