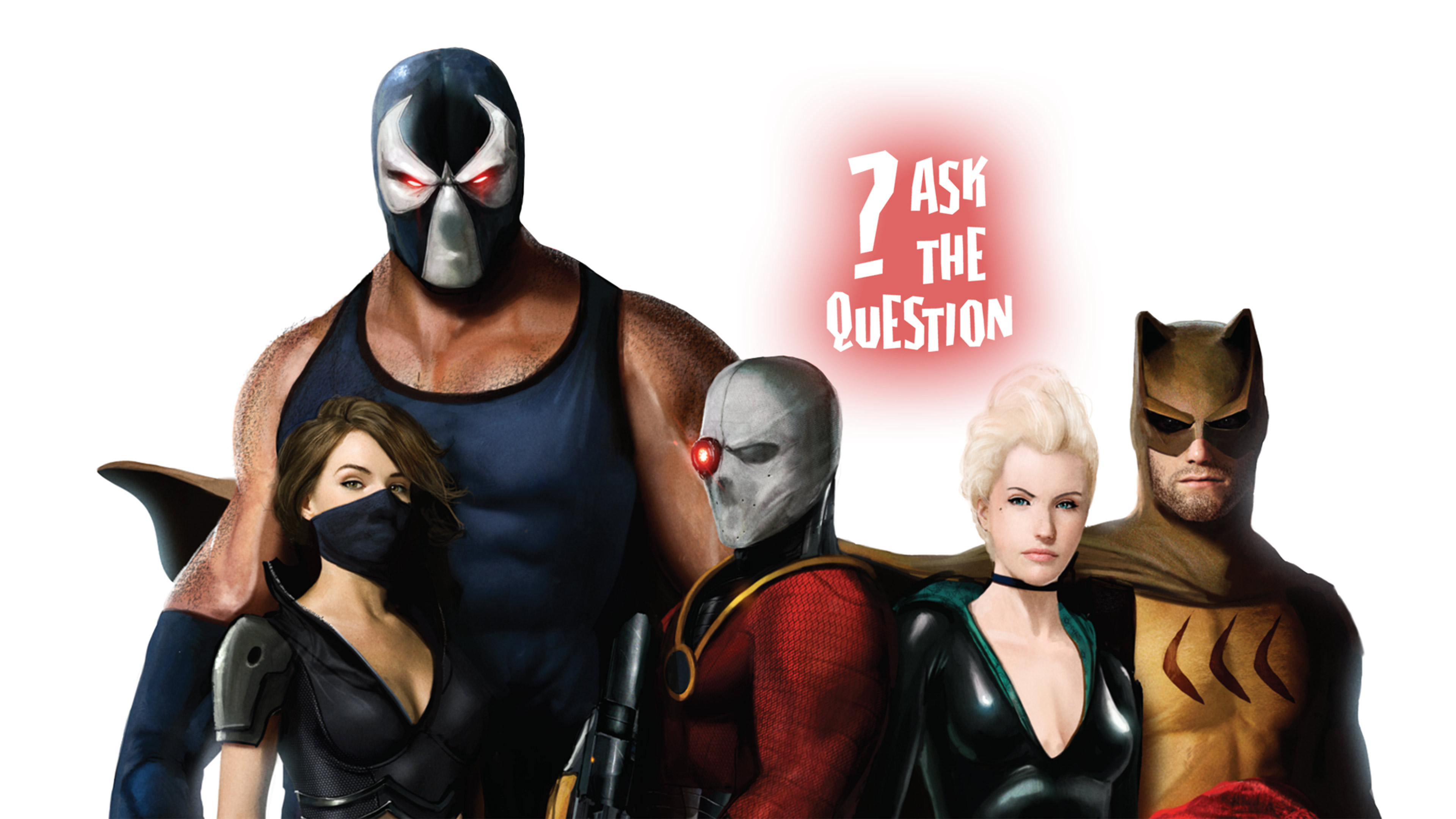 Ask...The Question: What Should I Read After SECRET SIX?

Hello. I’m Alex Jaffe, better known in our Community as HubCityQuestion. My personal mission: to take on any question you have about the DC Universe -- no matter how granular, obscure, or strange -- and present you with an answer. As a faithful steward of the truth, I offer my time in this weekly column to address these inquiries. If you’d like to submit one of your own, you can stop by my office at any time in our lively Community to state your case, which I will address in turn to the best of my ability. Come along, and let’s solve the mysteries of the universe together.

WHAT COMES AFTER SIX? 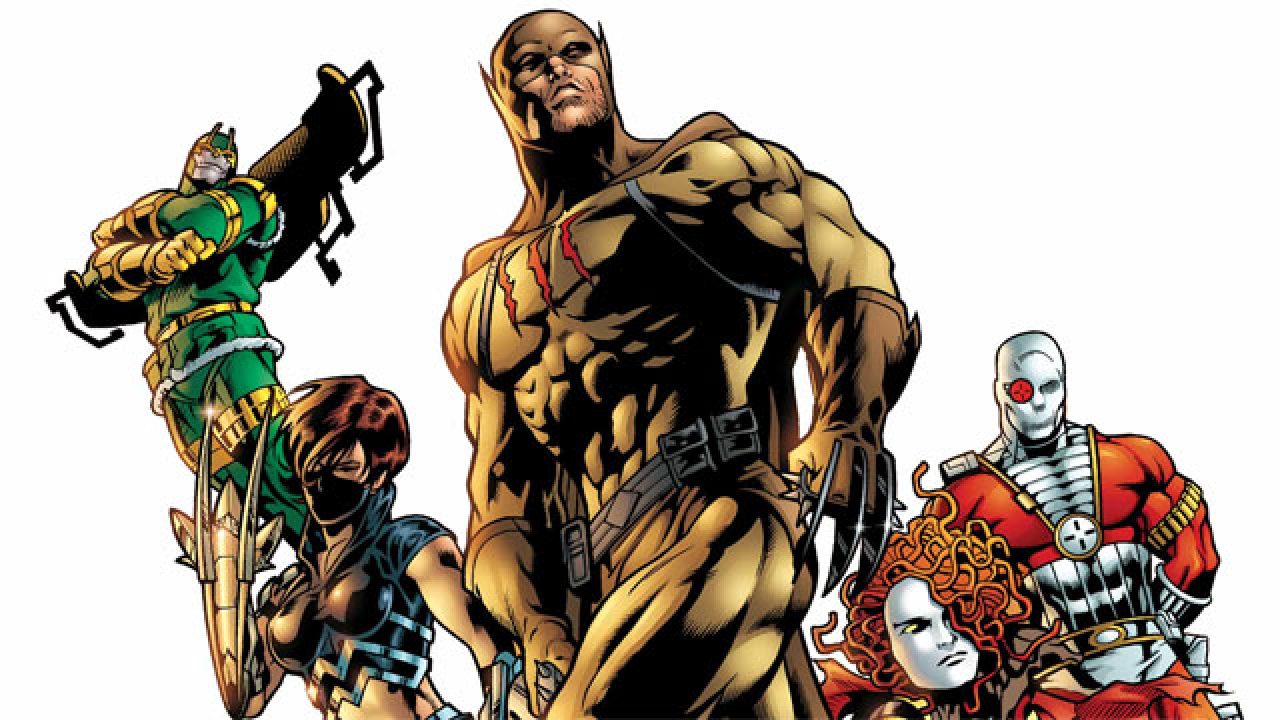 “Who watches the Watchmen? On another note, I just finished reading Secret Six and loved it; after that, is there anything else you would recommend I begin reading? Thanks.”

Okay, time to answer this once and for all. The 2009 film Watchmen had a box office gross of $185.3 million. According to the National Association of Theater Owners, the average price of a movie ticket in 2009 was $7.50. Therefore, we can assess that twenty-four million, seven hundred and six thousand, six hundred and sixty-six and two-thirds people watched the Watchmen. I’m not sure what the deal with that two-thirds person is. Maybe they walked out because the ending wasn’t faithful enough to Alan Moore’s original vision.

Congratulations on finishing Secret Six! This read featuring hard luck bad guys finding an unlikely support network in each other is widely regarded as some of writer Gail Simone’s greatest work. Here’s where you might want to go from here.

* Secret Six -- the New 52 series! If you’re only familiar with the Pre-Flashpoint run, this makes for an excellent chaser.

* Salvation Run -- the villains of the DC Universe must band together for survival on a hostile planet!

* Forever Evil: Rogues Rebellion -- The Rogues of Central City say NO to Earth’s takeover by the Crime Syndicate of America!

* Hitman -- Garth Ennis’s darkly hilarious series about trying to make an honest living as a killer-for-hire in the DCU.

* Plastic Man -- The 2004 series by Kyle Baker which treats Plas with all the irreverence he deserves. (And to follow it, why not check out Gail Simone’s own Plastic Man series?)

* Justice League International -- The iconic Keith Giffen and J.M. DeMatteis run which reinvisioned the dynamics of the Justice League itself as an office workplace comedy.

A CHILL IN THE AIR

“Hey HCQ, I am aware that Batman’s origin story has been covered extensively over the years in both print and visual mediums. I am curious if there has ever been one of these origin stories where they go more in-depth into the history and personal motivations of Joe Chill? I seem to remember they cast Joe as a ‘cheap petty hood’ and in line with the whole criminals are a superstitious and cowardly lot way of thinking. Court of Owls [in TV’s Gotham] as being responsible was an interesting take, but have we ever gotten anything more nuanced and personal? Storylines where Joe Chill later becomes The Joker do not count. Thanks man.”

As the man linked inexorably to the origin of Batman himself, authors throughout the ages have found the temptation to put their own interesting spin on two-bit hoodlum Joe Chill.

The first revelation of Joe’s background was a story written by Batman co-creator Bill Finger himself. In 1956’s Detective Comics #235, the Silver Age Batman discovers that Joe Chill was no mere mugger: he was in fact a button man for notorious Gotham mobster Lew Moxon, an enemy of Thomas Wayne who Batman’s father subdued and had arrested after Moxon attempted to rob a costume party. As per an earlier story by Finger, Joe Chill eventually moved up from mugging and killing for mobsters into his own smuggling operation. This Pre-Crisis version of Joe Chill was killed by his own gangsters after he learned that he was responsible for Batman’s creation, and relayed that information to them -- but died before he could reveal Batman’s true identity.

In later stories, we begin to learn about some of Joe Chill’s family, and their strange connection to Batman. In 1968’s The Brave and the Bold #79, Joe Chill’s brother Max seeks revenge on Batman for the death of his brother. One year later, stories begin taking us back to Bruce’s youth introduced us to Mrs. Chilton, a kindly housekeeper in the employ of Philip Wayne -- Thomas Wayne’s usually-absent world-traveling brother, and Bruce’s legal guardian after the death of his parents. Mrs. Chilton cared for Bruce as if he were her own son… but it wasn’t until much later that bruce learned his caretaker had two children of her own: Joe, and Max. (As is later revealed in The New 52, Joe Chill had a son of his own: Dax Chilton, who becomes one of the unauthorized Robins in We Are Robin.)

After Crisis on Infinite Earths, three different accounts of Joe Chill were presented. In Batman: The Ultimate Evil, Joe was once more revealed to have been hired to kill the Waynes, under the orders of the ringleader of a child trafficking operation that Thomas had interfered with. In the storyline “Batman: Year Two,” set early in Wayne’s crime fighting career, Batman is forced to join forces with Joe Chill in a combined effort to take down the lethal vigilante, The Reaper. Determined to kill Joe Chill himself, The Reaper ultimately does the deed for Batman before he’s able to follow through. Then, in Batman #673, Joe Chill is shown to take his own life, unable to handle the revelation that Bruce and Batman are one and the same… though this incident is later shown to be a fantasy.

In The New 52, a story set while Bruce is eighteen has him track down Chill for answers, suspecting that he may have been working under orders from the Court of Owls. What he finds is a thoroughly broken man living in a filthy hovel, who confesses the truth: that he only wanted to take his mother’s pearl necklace so he could buy alcohol, and the whole thing just got out of hand. In the Darkseid War, we catch up with a less pathetic, more dangerous Joe Chill who had gone on to kill 40 men for the mob. Chill is shown to be a model prisoner at Blackgate Penitentiary, and Batman uses the Mobius Chair to ensure he may never know Batman’s true identity.

YOU CAN COUNT ON ME 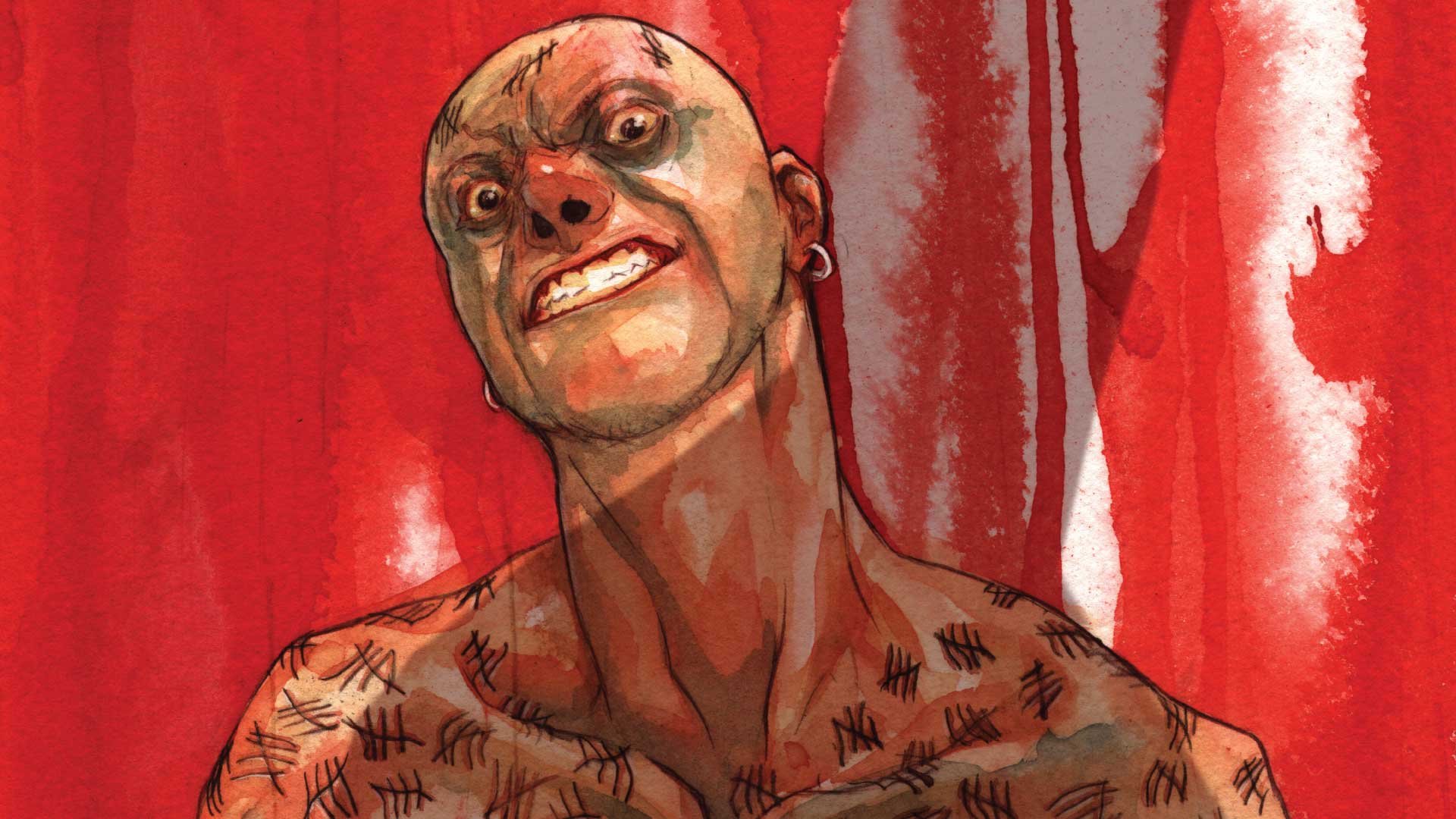 “How many people has Victor Zsasz killed in the comics?”

Well: have you tried counting the tally marks? Of course not. There’s never a clear shot of every mark Zsasz makes on his body at once for every person he’s killed, and no artist draws the number consistently. To do so would be an exercise which would warrant their commitment to Arkham themselves.

Instead, to figure this out, we’re going to do something ALMOST as stupid: rather than read Zsasz’s body for answers, we’re going to count every confirmed kill in every canonical appearance of Victor Zsasz.

First, some ground rules. For the purposes of this exercise, we will not be counting any kills made or referenced to within media outside of the comics, or comics which take place outside of the mainstream Post-Crisis or Post-Flashpoint continuity. So no Gotham, no Arkham games or tie-ins, no Injustice. And to count as a kill, it has to be someone who died directly by his hand. None of that Streets of Gotham business where he was setting up kids to kill each other. Got it? Good. With that in mind, let us begin our torrid tally.

Mr. Zsasz is first introduced in 1992’s Batman: Shadow of the Bat #1. Batman helpfully tells us upon meeting him in Arkham Asylum that Zsasz has been held accountable for 47 known victims. (Thanks to this count, we may also include any kills from flashback stories set before Shadow of the Bat #1 as part of this number.) There are far more than 47 tally marks on his body when we first see him, but this discrepancy is subtly explained in 2007’s Gotham Underground #2 -- where we witness Zsasz marking himself after killing a rat. To Zsasz, there is no difference between taking the life of a human or beast. We may therefore presume Batman’s count of 47 as our base, to build upon through further incident.

In Shadow of the Bat #2, Zsasz reveals himself to be the killer in three more unsolved murders, bringing the total up to 50.

In Shadow of the Bat #3, Zsasz kills two more, and convinces a third to kill himself. But we’re not counting that one. 52.

In Batman #493, Zsasz escapes Arkham courtesy of Bane and takes a girls’ boarding school hostage. The children are saved, but Zsasz kills two cops sent to subdue him first. 54.

Shadow of the Bat #82: Zsasz kills the man who breaks him out of his cell during No Man’s Land. 55.

In a short story by Brian Azzarello and Eduardo Risso for the Batman: Black and White collection, Zsasz takes the lives of three gang members. 58.

Detective Comics #796: Zsasz kills two more, and tries to claim Stephanie Brown as a third. Big mistake -- but that does bring him up to 60.

Batman: Cacophony #1: Zsasz kills another married couple, but Batman arrives in time to save the kids. 74.

Batman: Battle for the Cowl #1: Zsasz removes a man’s head at a construction site. 76.

Batman: Battle for the Cowl #2: Zsasz kills a police officer, allowing Jane Doe to remove his face and disguise herself as him. 77.

Superman/Batman #62: While Robin and Supergirl handle the more glamorous villains in an Arkham riot, Zsasz gets to work and kills six orderlies. They intervene in time to save a seventh. 83.

Streets of Gotham #3: After upgrading his look with a custom made suit, Zsasz murders his tailor. 84.

Streets of Gotham #10: In this story arc, Zsasz sets up a colosseum in an abandoned abattoir where children fight each other to the death. The winners can earn their freedom if they can win their last matches against Zsasz himself. There’s no exact number given on how many children Zsasz personally kills, but Damian puts it at “a few.” Because the ring hadn’t been operating for very long by the time Damian intervenes, let’s conservatively estimate three new Zsasz victims. 87.

Streets of Gotham #11: Zsasz kills four of his own underlings while fighting Damian in the battle pit. 91.

Legends of the Dark Knight #21: Zsasz kills another Arkham guard during another riot. 93.

Detective Comics (2011) #19: Zsasz spreads the Man-Bat contagion across Gotham’s 900 block, but takes a victim after transforming into a Man-Bat himself. 96.

Forever Evil #1: Zsasz kills again as a riot breaks out in Arkham. 99.

Forever Evil: Arkham War #4: Zsasz kills a Blackgate prisoner as the “Arkham War” spills into the streets of Gotham. 100.

All-Star Batman #4: Zsasz finishes off the fifth, who Batman deduces had set up the other four to be killed. 111…

...and that’s the last victim we know of that Zsasz has claimed. That’s one hundred and eleven, by the way, not three. Enough to fill over 22 groups of five-hash marks!

As for you, dear readers, there’s no need to carve your skin to keep your tallies… because you can always count on me. Whatever’s on your mind about the DC Universe and its many denizens, you need only ASK… THE QUESTION.