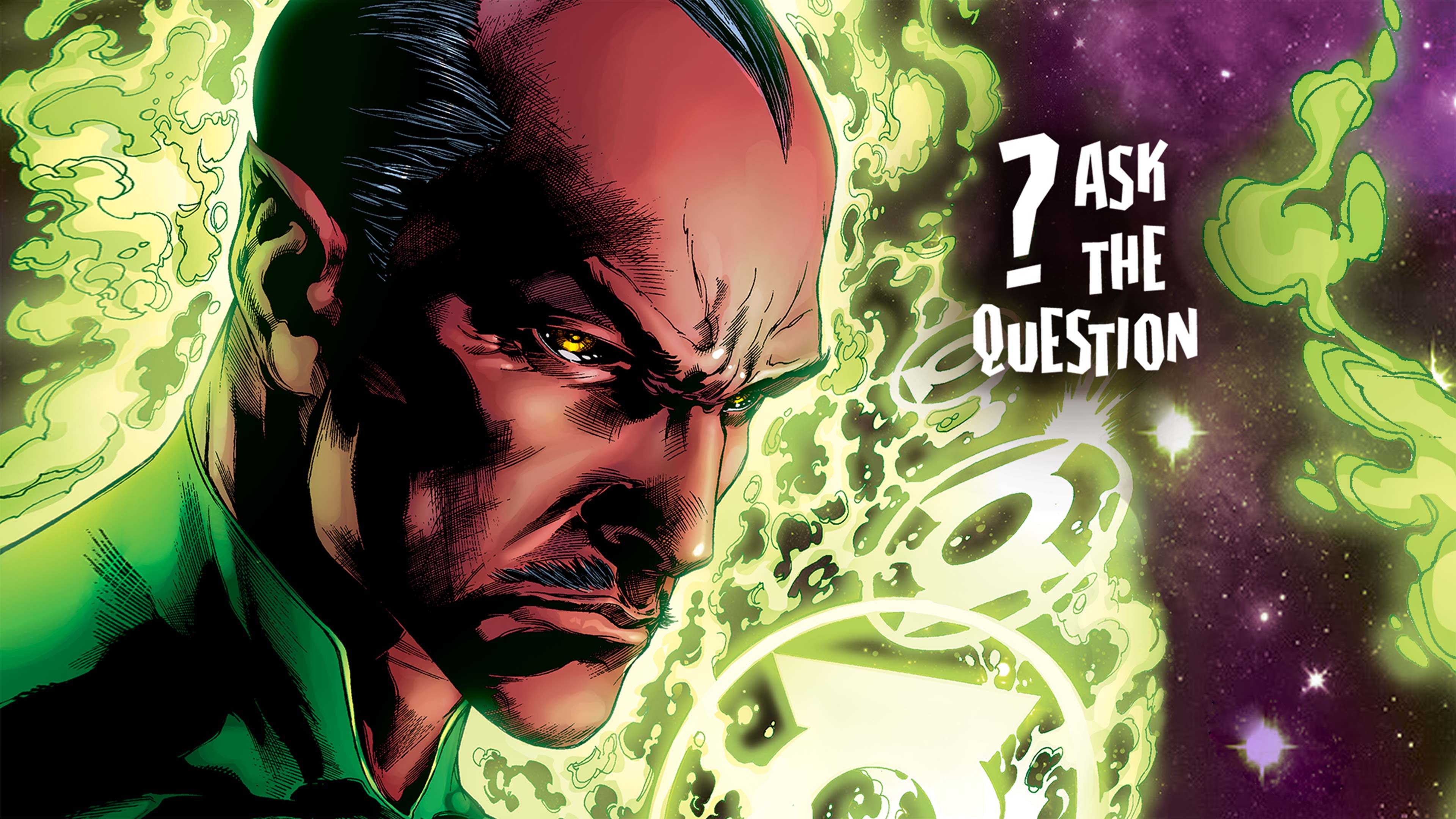 Hello. I’m Alex Jaffe, better known in our Community as HubCityQuestion. My personal mission: to take on any question you have about the DC Universe -- no matter how granular, obscure, or strange -- and present you with an answer. As a faithful steward of the truth, I offer my time in this weekly column to address these inquiries. If you’d like to submit one of your own, you can stop by my office at any time in our lively Community to state your case, which I will address in turn to the best of my ability. Let’s see what we have on the docket this week.

This week, neal.heatherly, Swampert, and Numbuh1Nerd all ask somewhat related questions, so I’ll be answering them altogether. 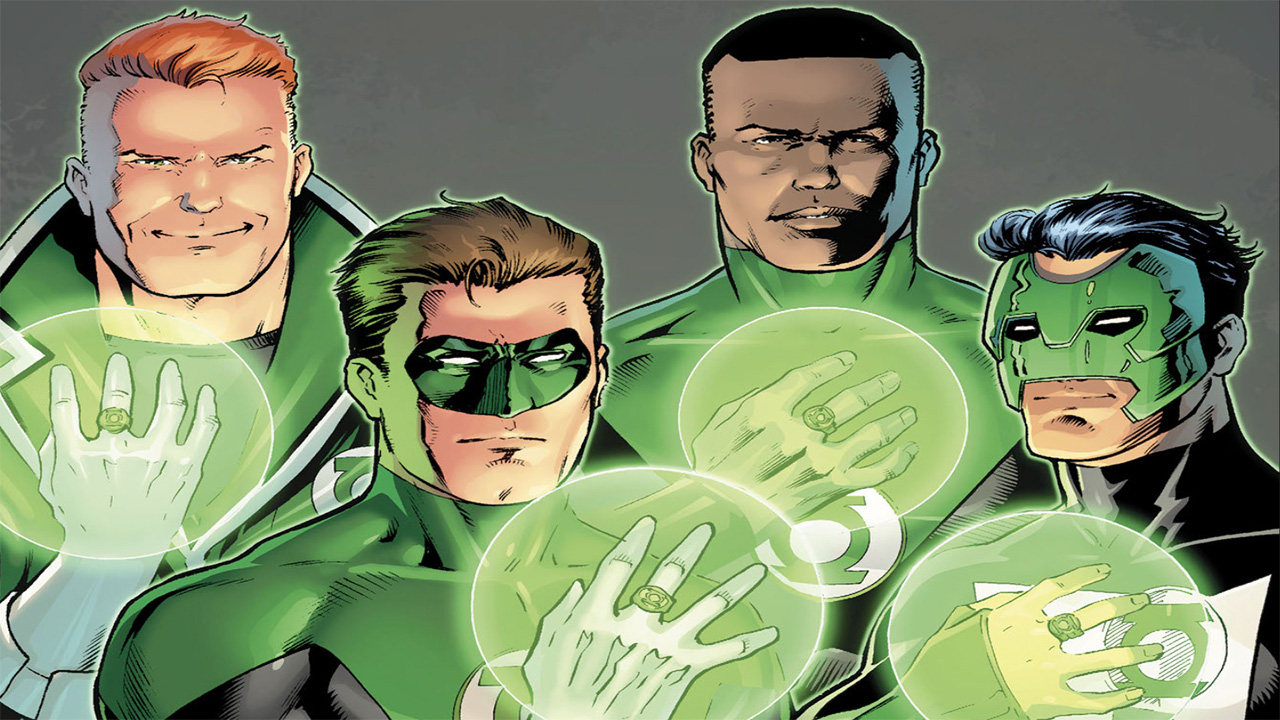 “In at least one telling of Hal’s origin, Abin Sur is surprised an Earthling would ever be chosen, so while it’s easy to understand how Hal needs so much backup, why have all of them been from Earth instead of elsewhere in Sector 2814? After who knows how long of other planets having individuals more capable of overcoming great fear than any Earthling, are we just supposed to believe these other Earthlings are more qualified than any sentient being on any other planet in the sector?

And yes, I recall Sinestro returning to the Corps in that role at the start of the New 52, but I’m perhaps stubbornly ignoring that since he’d already been in the Corps.

Actually, that’s another question: If Sinestro initially served concurrently with Hal, what Sector did he represent? Was he always from 2814? If so, why were he and Abin Sur both serving the sector at the same time? If not, why was he serving Sector 2814 in the New 52 instead of his home Sector?”

“Was Sinestro’s childhood ever shown in a comic? I’m curious to find out what his parents were like.”

“What makes Earth so special? …Let me rephrase that. The Justice League seems consistently responsible for taking care of intergalactic threats whether they involve Earth or not, and Oa seems to treat Earth like a special case, giving them... a bajillion Lanterns. What’s the in-universe reason why the Earth is so especially racked with super-people? Why don’t other planets have their own Justice Leagues?”

First of all, let’s discuss the matter of Hal Jordan being the first Green Lantern from Earth, followed subsequently by so many others from the same planet. What you have to understand about The Guardians of the Universe who assign these positions is that, having run the Corps for billions of years, they tend to stick with what they know works. As Tim Seeley elucidates in his Green Lanterns run, before Hal Jordan, the vast majority of Green Lanterns throughout history in Sector 2814 were Ungarans -- Abin Sur’s people. It was only through the extremely unlikely accident of Abin Sur’s crash landing on Earth that a human was given the chance. Even then, Hal Jordan spent decades in the comics proving that he was worthy of such a responsibility, a through line which carries through his entire Silver Age run. But as it is now written in the Book of Oa, Hal Jordan has since distinguished himself as “the greatest Green Lantern of them all.” So it should stand as no surprise that The Guardians themselves may have sought to replicate that success further. We must also consider that every one of the human Green Lanterns was awarded their rings under special circumstances: Guy Gardner was an emergency alternate, John Stewart was an alternate FOR that alternate, Kyle Rayner was bestowed his when the Corps had fallen to Parallax, Simon Baz got his own when Hal and Sinestro’s rings malfunctioned early in The New 52, and Jessica Cruz earned hers after overcoming Volthoom in “Darkseid War.”

Which is all to say that Earth is a place where a lot of stuff happens, all the time. And hence, where most of the cosmic action in the DC Universe pops off. But why is that? Well, realistically, it’s because Earth is the place that both readers and comic creators are the most familiar with, and therefore the place where most of these stories tend to be set. But this was also an issue which plagued DC’s former Chief Creative Officer Geoff Johns, who put an explanation forth in Blackest Night: that in truth, Earth itself was the birthplace of the Life Entity of the White Lantern, where all life in the universe originated. Johns placed Earth at the center of the living universe, and since then all conflict upon Earth has been a reflection of the universal struggle of life itself -- physical manifestations of a primordial clash between metaphysical entities which all began right here on Terra Firma. Maybe that seems a little too “human-centric” an approach for you, but hey: I don’t see comics being published on any other planets.

All right, now let’s talk about Sinestro. Though he was once close friends with Hal Jordan’s predecessor Abin Sur, Earth was never meant to be part of the future Sinestro Corps leader’s beat. Rather, Thaal Sinestro was the protector of Sector 1417, the slice of the universal pie which included his homeworld of Korugar. Not much is known about Sinestro’s early life at this point, I’m afraid, much less his parentage. That story, if there is one, is yet to be told.

The earliest glimpses we’ve seen of Sinestro’s life before the Corps were only moments before his recruitment. Before the calling of the Green Lantern Corps, Sinestro was an archaeologist, dedicated to uncovering, preserving, and protecting the lost culture of his homeworld. Until one day, a Green Lantern on the verge of death pursued by a Weaponer of Qward crashed before him, not unlike Hal Jordan’s own encounter with Abin Sur. Sinestro took the ring for his own to vanquish the Weaponer. But while he had the opportunity to use his ring to save the life of his predecessor and return the ring to him, Sinestro chose to let him die and keep it for himself… and for Korugar.

Sinestro was quickly inducted into the Corps after that incident, where he was mentored and befriended by Sector 2814’s Abin Sur. Despite being from two different sectors, the two became fast friends -- not unlike the relationship between Hal Jordan and Kilowog. Together, Sinestro and Abin Sur gained a reputation for pursuing missions which put the universe as a whole in danger, and both became regarded as some of the finest members of the Green Lantern Corps. Sinestro even fell in love with Abin Sur’s sister, Arin Sur. They married, and had a daughter, Soranik, who would one day succeed her father as Sector 1417’s Green Lantern.

Because Sinestro had so thoroughly gained the trust of the Corps through his great acts of heroism, he was left without oversight to protect his sector on his own terms. Little did anyone imagine that Sinestro was using the full extent of his powers to maintain a tyrannical rule over Korugar where all disobedience was met with cosmic retribution. Arin Sur came to fear and hate her husband for his actions, and left him to pursue his own inevitable self-destruction. As for their daughter, Soranik was given up for adoption, to be raised away from Sinestro’s influence by Dgibb and Karoll Natu. (Some point after she left Sinestro, Arin Sur passed away, but how that tragedy occurred remains unknown.)

It was, of course, Hal Jordan who first learned what Sinestro had done to Korugar, and Hal who ultimately brought this Green Lantern who had once mentored him to justice. Exiled to Qward, Sinestro forged a new ring which he would use to exact his revenge upon the Green Lantern Corps for spurning his radical ideas for order -- and thus his long campaign against the Guardians began. 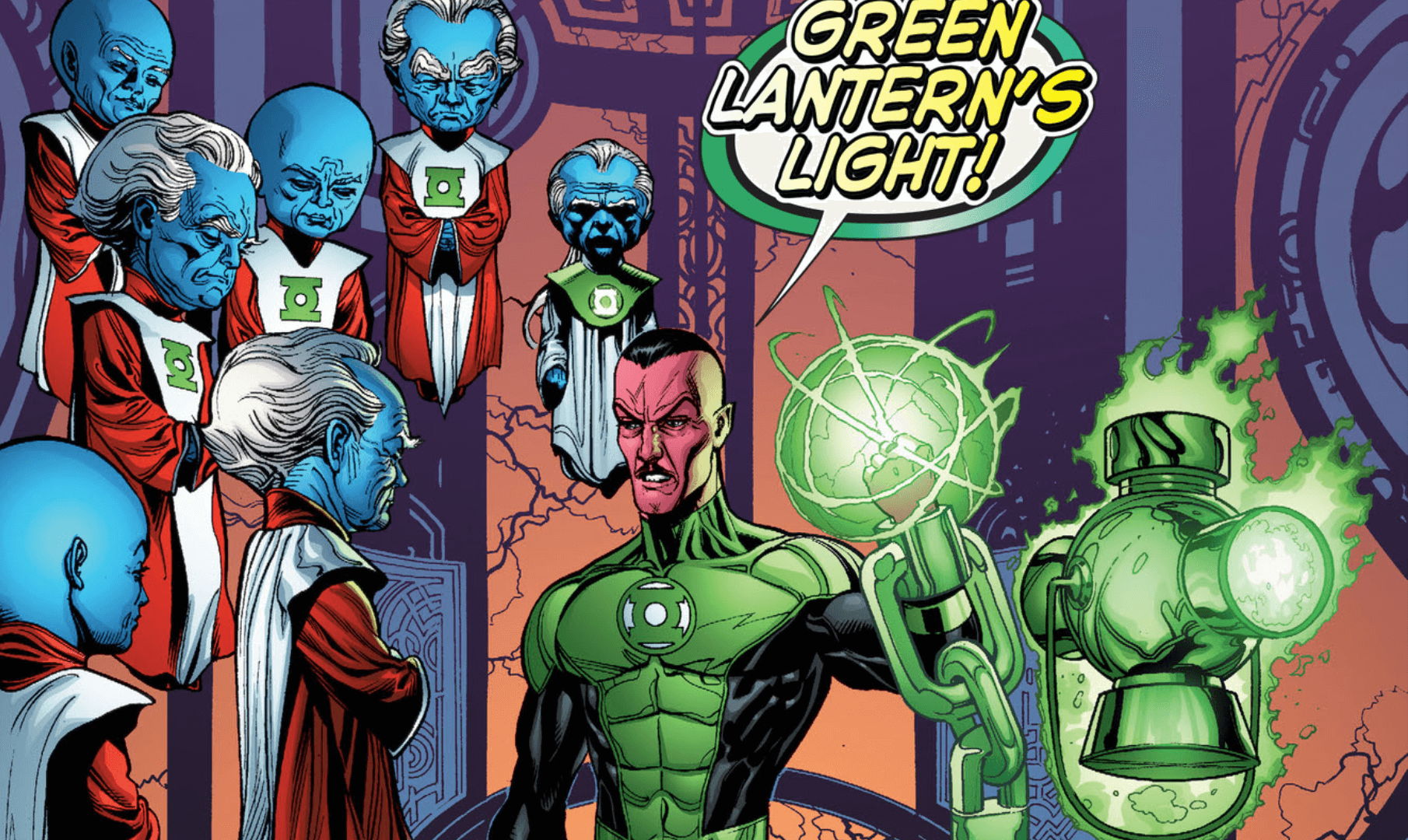 Which leaves us with one final question: what is Sinestro doing as the Green Lantern of Sector 2814 early in The New 52? Well, what we have here is a series of complex events from the heat of a now mostly forgotten cosmic battle, muddled in time by a not quite all-encompassing reboot.

Unlike the vast majority of DC stories in the wake of Flashpoint, Geoff Johns’ Green Lantern saga which he had begun in 2004 continued more or less uninterrupted by The New 52 until he could wrap it all up a few years later.  (The other standout exception: Grant Morrison’s Batman, Incorporated storyline, which similarly continued mostly as planned on either side of Flashpoint.) What you are seeing here is the fallout of the last major Green Lantern story arc before Flashpoint, “War of the Green Lanterns.” In an all-hands-on-deck battle against the fallen Guardian Krona, Krona takes control of the yellow light of fear and denies Sinestro his own Sinestro Corps ring. Momentarily ringless, Sinestro is once again enlisted to the Green Lantern Corps, having been given a second chance to prove himself. Hal Jordan, on the other hand, delivers the killing strike against Krona, and is stripped of his rank by the Guardians for doing so. It is later noted by the Guardians that the rings do have a certain will of their own, which they ultimately decide to respect -- perhaps because they’re down one legendary Green Lantern, and are in need of another. And so, Sinestro is assigned to Hal Jordan’s own vacated posting. A not unprecedented move: while rare, Green Lanterns are sometimes assigned to Sectors other than their own when necessary. But a poor decision? Almost certainly. Then again, poor decision making seems to be the raison d’être of the Guardians of the Universe.

However, what brings Sinestro to Sector 2814 in 2011’s Green Lantern #1 is not necessarily Guardian business, but his own: Sinestro is not happy about being a Green Lantern again, and finds to his chagrin that he cannot remove his ring. He believes that with only the fallen Hal Jordan’s help can he return to his Sinestro Corps, and balance may once again be restored. After a whirlwind cosmic campaign against the Guardians’ “Third Army,” Sinestro was proven right -- though, from Sinestro’s perspective, that’s nothing new.

All right! With all that cleared up, it’s time we returned to Earth -- which, as established, is where all the action is. It’s also where YOU can submit your inquiries to my desk, where we can explore the answers together in this weekly column. All you need to do is ASK… THE QUESTION.