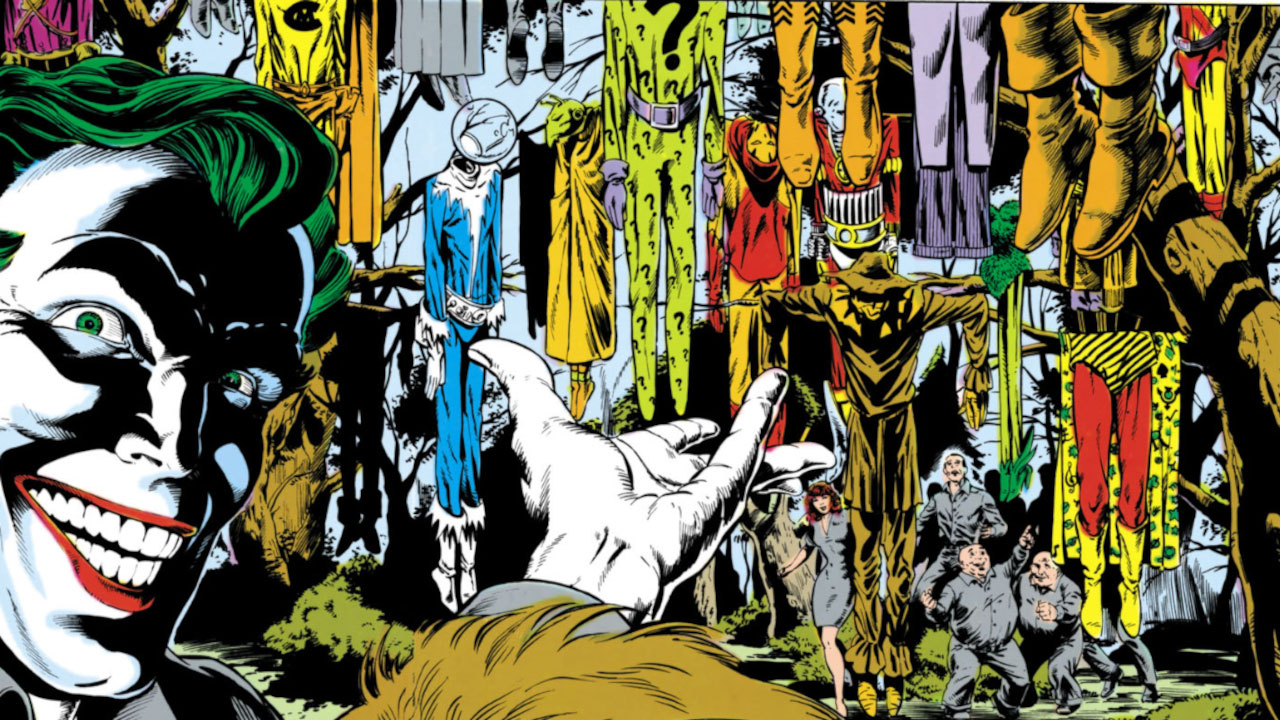 Ask...The Question: How Many Villains Does Batman Have in Total?

Hello. I’m Alex Jaffe, better known in our Community as HubCityQuestion. My personal mission: to take on any question you have about the DC Universe -- no matter how strange, granular, or obscure -- and present you with an answer. As a faithful steward of the truth, I offer my time in this weekly column to address these inquiries. If you’d like to submit one of your own, you can stop by my office at any time in our Community to state your case, each of which I will in time address to the best of my ability. And now: you’ve asked, so it’s time to answer. 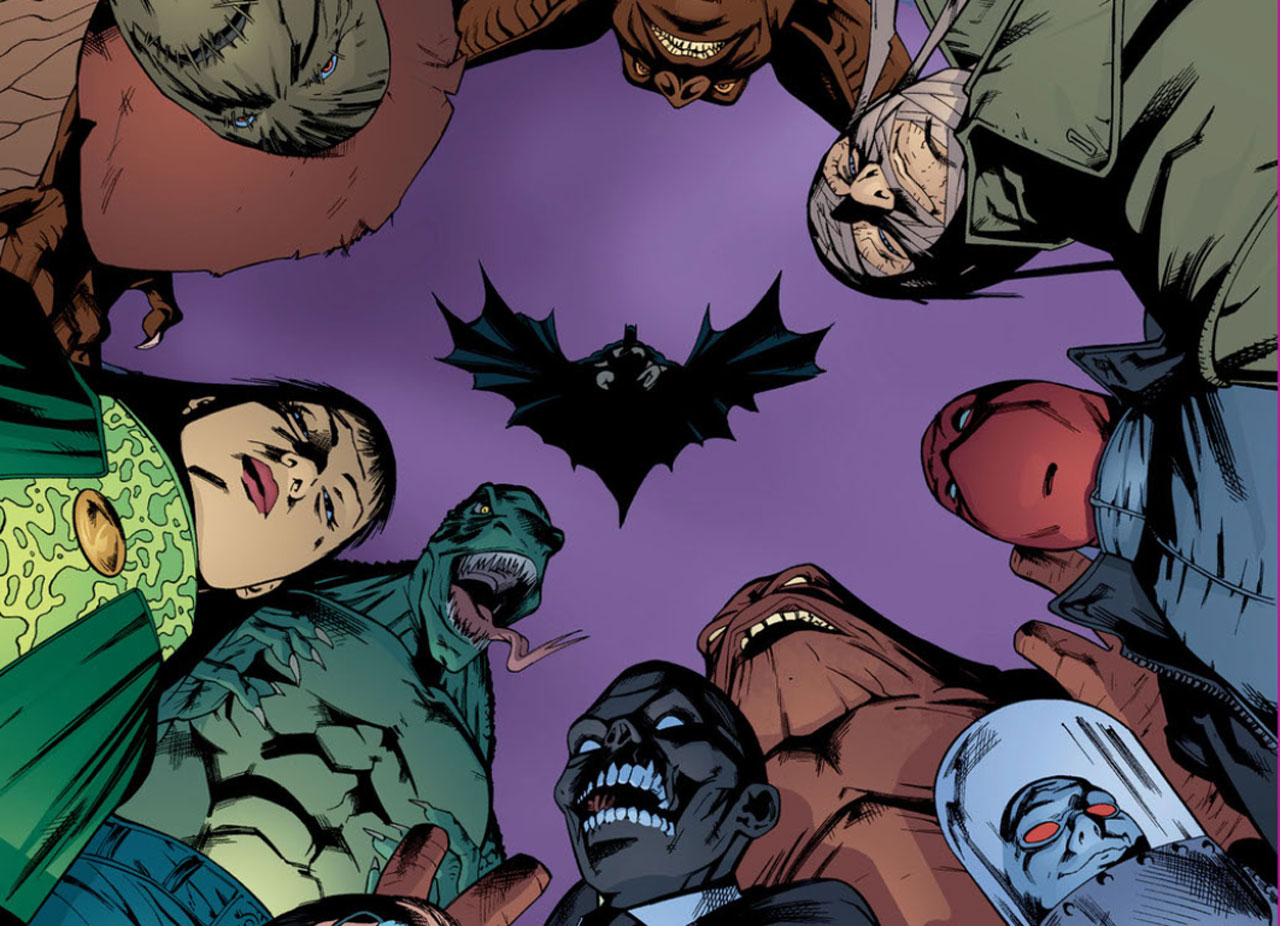 “How many villains does Batman have in total?” -BatmanFan2007

That’s a pretty big question, BF2007. There have been thousands and thousands of Batman comics, films, television video games, novels, radio broadcasts -- practically every medium you could possibly imagine, many of which feature enemies which have only appeared once and never again. It would take a lifetime to get a truly 100% accurate count. So, let’s get specific here. What is a “villain?” And how do we define Batman “having” them? Joker counts as a Batman villain, sure. But does Red Hood? Does Sal Maroni, a gangster with no villainous alter ego? How about someone like Lady Shiva? She’s fought Batman before, but she originates from a ‘70s kung fu series; is she really a Batman villain? Or Solomon Grundy, for that matter? Isn’t he originally a Green Lantern villain?

Let’s put some limiters on here, then. For a character to count as a Batman villain, I believe they should have a specific super-villain alter ego, engage primarily in villainous activities, and primarily, almost exclusively fight Batman himself… in the mainstream comics continuity. Because if it didn’t happen in the comics, it didn’t REALLY happen.

Let’s start with the central Rogues Gallery. These aren’t necessarily A-Listers, but they’re the ones you’ll see pop up in pretty much any incarnation of Gotham City these days, if it persists long enough. You got Joker, Penguin, Riddler, Scarecrow, Two-Face, Killers Croc and Moth, Mr. Freeze, Poison Ivy, Bane, Hush, Zsasz, and Kite-Man (hell yeah). You got three Fireflies, two Black Masks, three Ventriloquists, let’s say… three of the five significant Clayfaces, and possibly two Mad Hatters, depending on how you view his history. Let’s count them as one. That’s a nice quarterly 25 right there.

Hugo Strange is a regular, but he’s got no villain name, so he doesn’t count. Catwoman WAS a Batman villain, but she’s more of an anti-hero these days. Same goes for Harley Quinn, Man-Bat, Catman, two of the Clayfaces, and Red Hood. Poison Ivy’s riding the fence. Give it a few years and she’ll probably be off the list too. Deadshot used to be a Batman villain, sure, but barely. Now he’s more of a Suicide Squad figure. And I don’t care what anybody says: Deathstroke is a Teen Titans villain. (“Aren’t there three Jokers?” I hear you ask. That’s Black Label, sweetie. Moving on, lot more ground to cover here.)

Next you’ve got your League of Assassins. That’s a whole other corner of Batman’s files. Most assassins use their real names, or are otherwise just underlings, but let’s at least count Ra’s al Ghul, Sensei, and the Seven Men of Death. Some would put Lady Shiva here. I would not. 34.

The Court of Owls… how do you count the Court of Owls? Answer: you don’t. Though they originated in the New 52 BATMAN series, they’re more significantly a part of Dick Grayson’s life than Batman’s. One exception is Lincoln March, the “Owlman” of the Court, who has claimed to be Bruce’s long-lost brother. 35.

The Club of Villains, founded by Morrison-era antagonist Simon Hurt, are actually villains of Batman’s counterparts in the Batmen of All Nations (later, Batman Inc). So all we need to count from this group is Dr. Hurt himself. Not counting the “Three Ghosts of Batman” either, as they were more victims of Hurt than enemies of Batman. 36.

The Circus of Strange, another Morrison-era group, are also technically Dick Grayson villains… though it was during Dick’s tenure as Batman, so I’ll count it. It’s got 7 members (three of whom are conjoined), so that brings us to 43.

OK, let’s run through the others real quick, and alphabetically. I’ll explain why I left certain villains off the list; others omitted you’re just going to have to take my word for.

Blackspell, Blockbuster (Mark Desmond), The Black and White Bandit, and… one of the three Black Spiders. (The second Blockbuster, Roland, is a Nightwing villain. Another Black Spider is an antihero, and the other never really met Batman.) 53.

From the E’s you get Egghead, Emperor Penguin, Eraser, and Executioner. (Electrocutioner is really more of a Nightwing villain, though there have been a number of them.) 83.

Facade, Film Freak (not to be confused with the Teen Titans’ Control Freak), four additional Fire-BUGS to the aforementioned Fireflies, and Fright. 90.

From H, you have Headhunter and Humpty Dumpty. (Hellhound is more of a Catwoman villain.) 97.

Karma, KGBeast, King Tut-  know this isn’t right, but let’s just count all the versions of Kobra as one guy. I mean, KOBRA does. It may be generous to even call him a Batman villain. But King Snake is right out. That guy’s a Tim Drake villain. 100.

NKVDemon, (the original) Nobody, and… well, Nocturna’s more of a Batwoman villain now. 116.

Onomatopoeia started as a Green Arrow villain, but he was just getting warmed up: he’s got eyes on Batman. Orca’s reformed. Owlman, like the Dark Knights, is more of a Justice League villain. 117.

Penny Plunderer, Polka-Dot Man, and as of the upcoming BATMAN/CATWOMAN, Phantasm. Prometheus is another Batman counterpart who’s really more of a Justice League villain. Punchline is more of a Joker ally than a Batman villain. If anything, she might be a Harley Quinn villain. So, 120.

I don’t think we should count Quakemaster, because the entire identity was a hoax, so moving on. Likewise, Query and Echo are just henchwomen.

The Rainbow Creature, Ratcatcher, at least three versions of The Reaper, and Roxy Rocket. 126.

Signalman, three Spellbinders, The Spook, The Squid, and Silver Monkey. 133.

Two different Tally Men, the Terrible Trio, Tiger Shark, the Trigger Twins, the Ten-Eyed Man (and the Nine-Eyed Man), and the delightfully gruesome Terminus gang of Terminus, Bat Head, Bootface, Scallop, and Smush (who counts as three himself). 150.

The Victim Syndicate is another 5. The Wonderland Gang brings us 7 more. Then there’s Wrath and Scorn, Zebra-Man, Zeiss, and Zodiac Master. Another 17, giving us 167.

Let’s see… after that first alphabetical sweep, there are still some villains from the Morrison era and the New 52 and beyond to account for. Many of the Morrison-run villains can be considered more Batman, Inc. villains than enemies of Batman himself. But we’ll include The Absence and The White Knight. From The New 52 and beyond, there’s a bunch of members of Dollmaker’s family, but I don’t feel inclined to count them separately; they all pretty much do the same thing. But we will count the Penguin’s lieutenants of Mister Toxic, Mister Combustible, Mister Mosaic, Hypnotic, and Combustible Man. There’s also Snakeskin, Doctor Falsario, some more Bane henchmen I won’t count, Mister Bygone, Mister Bloom, White Rabbit (not to be confused with the Wonderland Gang’s March Hare), Colonel Blimp, The Haunter, The Stag, Gunsmith, Mister Teeth, The Designer, and pretty soon, a fellow in the post “Joker War” comics named Ghost-Maker. That gives us a total of… 19 more, and a grand total of 186.

Did I leave some villains out, even by my narrow (and sometimes arbitrary) criteria? Probably. Shout out anyone I overlooked in the comments, and if they meet my unreasonable standards, maybe I’ll run an addendum for my Batman Day column next year.

Wow, that took some time, huh? Imagine how busy Batman must be keeping track of all these guys. And these are just the colorful ones. Looks like we’ve just got time for one more question this week. 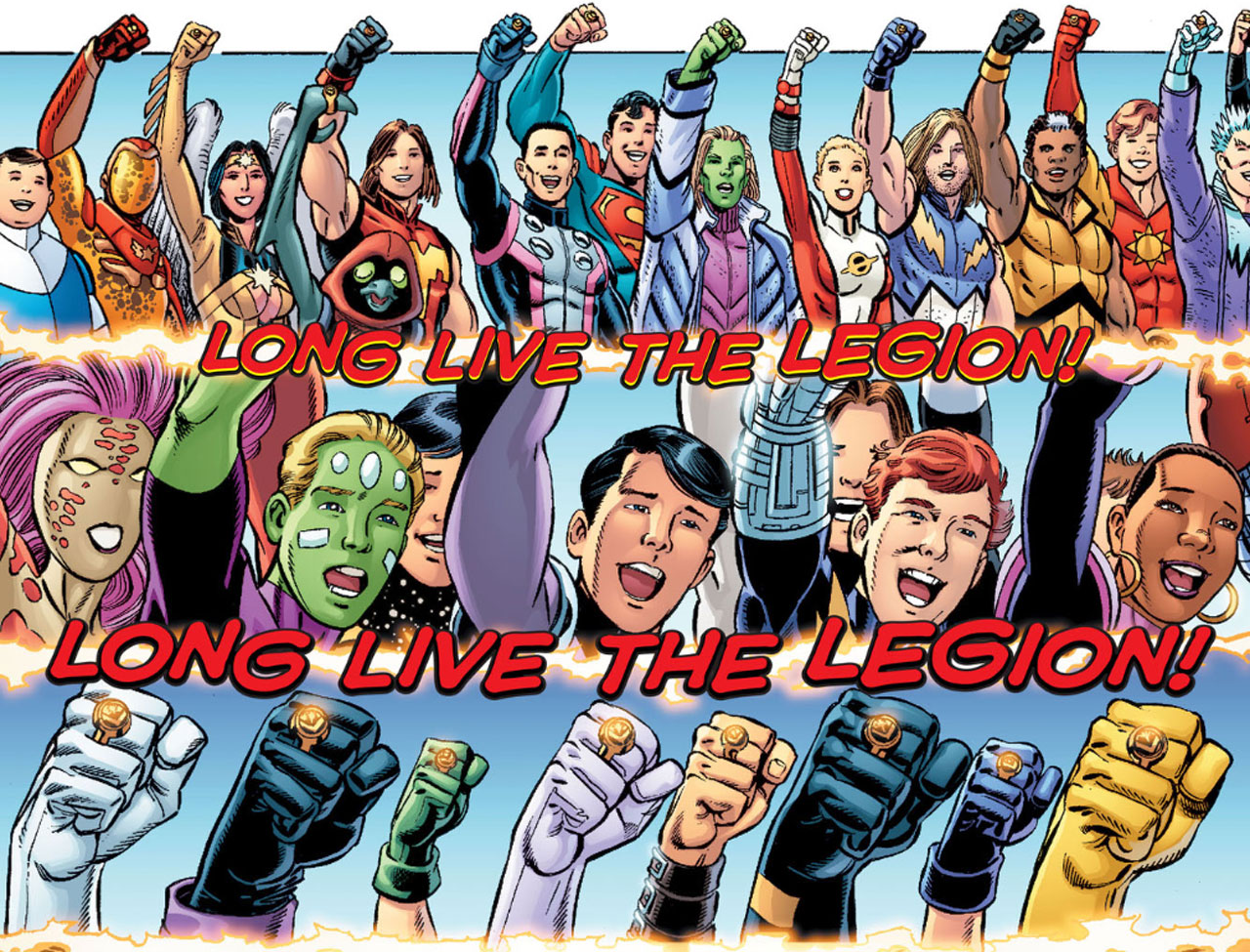 “Alright, so I know that Mark Waid’s reboot of the Legion of Superheroes was later revealed, in the Final Crisis tie in Legion of Three Worlds, that this Legion was set in the future of Earth Prime. This makes a lot of sense considering that the character could frequently be seen reading real world comics from our time. My question is, was this revelation always Mark Waid’s intention, or was this a retcon introduced by Geoff Johns in order to return to the original Legion continuity?” -ElBarto316

As anyone who’s worked near or in the industry can tell you, comic book storytelling is a collaborative venture. Tracing an idea back to the exact person who conceived it can be a futile endeavor, since the reiterations upon that idea as others contribute to it become just as much a part of its core as the original conception. Unless an idea comes from a comic that has only one person who wrote, drew, and edited the book all by themselves, with zero influences from the comics which have preceded them, then there are no pure, isolated ideas in comic books.

Personally, my thought was that this was a Johns idea. Were it Mark Waid’s intention, we would have seen it figure more prominently into the pre-FINAL CRISIS issues of the series. At the time, it simply seems to be Waid’s conception of the one, true take on the Legion of Super-Heroes, as opposed to one of many, as Johns establishes in THREE WORLDS.

That being said, we can speculate all we like, but it’s difficult, if not impossible, to get a true, definitive answer on what actually happened and how an idea came to be unless you ask the parties involved themselves.

So that’s what I did.

After forming my own forensic theories, I passed this inquiry on to Mark Waid himself for comment. I’ll be honest: I didn’t expect an answer, because he’s a very busy man. But to my surprise, he got back to me in less than a day’s time.

Here’s what Mark Waid had to say:

“Actually, that Legion was always intended to be the "real" Legion. What happened was that no one told us about the Lightning Saga, and that did so much to make our Legion look "not real" that our book never recovered the early momentum."

So, there you have it. This just goes to show the underlying philosophy of this entire endeavor, as we close its 65th chapter: on the quest for knowledge, discovery, and understanding, never be afraid to ASK… THE QUESTION.

Well, that’s it for now. But remember you can always come on by the Community to ASK… THE QUESTION.