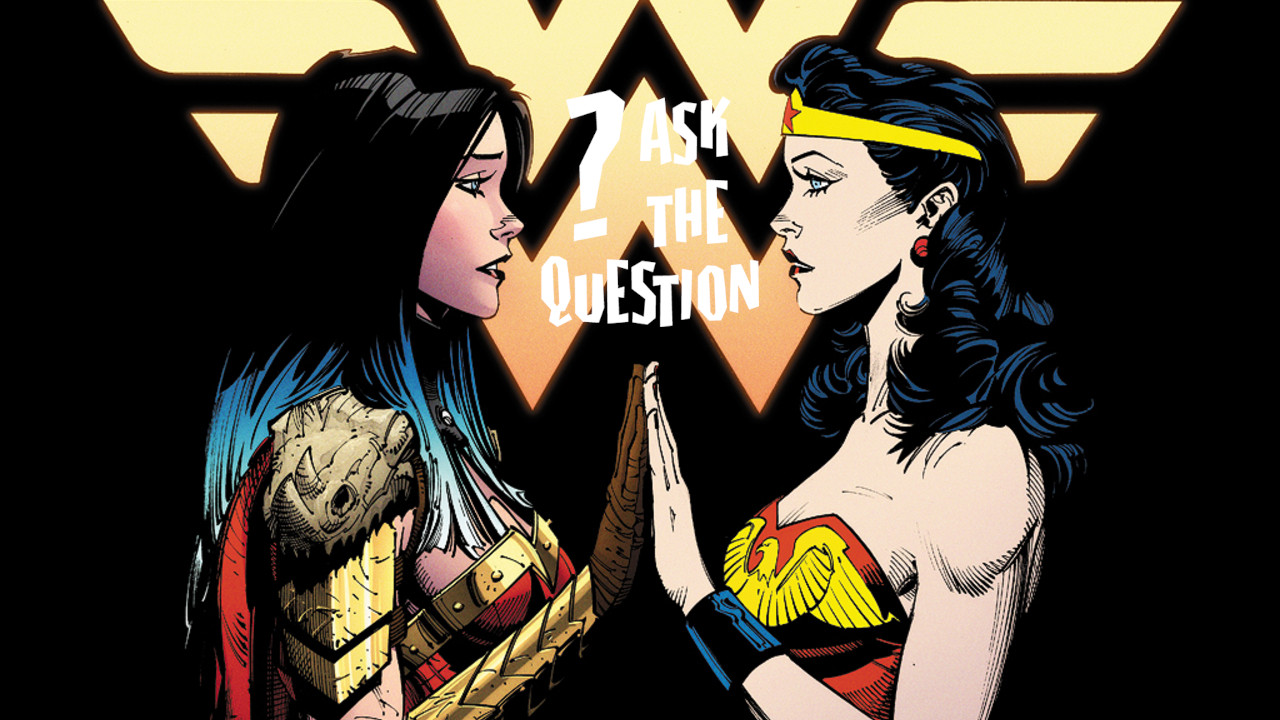 Ask...The Question: How Many Times Has Wonder Woman Been Introduced to the World? 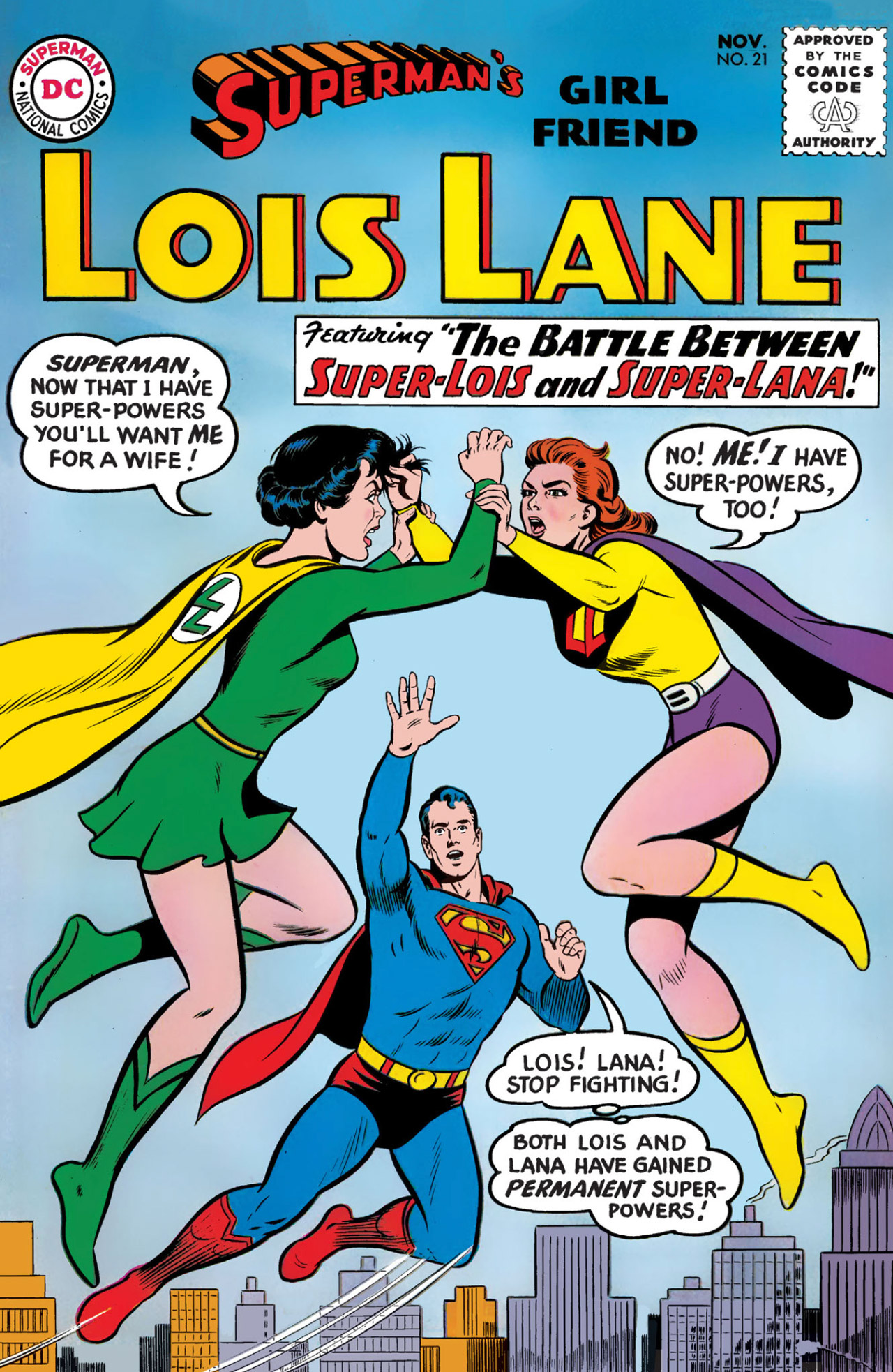 “When DC was deeply entrenched in ‘LL’ mania back in the ‘60s, with Lois Lane, Lana Lang, Lori Lemaris, Linda Lee, Lucy Lane, and then Lex and Lena Luthor. His dad wouldn’t get his double initials for 20+ years yet, where THE UNAUTHORIZED BIOGRAPHY would rename him ‘Lionel.’ That got me wondering exactly when did DC assign a first name to Superman’s premier arch enemy? I know there were other ‘LL,’ so how 'bout a list when you’ve got time?” -Wrightline1.42741

Although introduced as a character back in 1940, Luthor was retrofitted with a first name just as the “LL” trend began of insinuating these recurring letters into all the most important people in Superman’s life. For the first 20 years of their rivalry, Luthor was simply “Luthor,” just as Superman was “Superman.” Luthor was finally given a first name in 1960’s ADVENTURE COMICS #271, the issue where Lex and Clark were first established as boyhood friends growing up together in Smallville.

You’ve hit most of the significant LL’s in your initial round-up, but here are a few more in Superman’s orbit:

Lightning Lad and Lightning Lass, two friends of Superboy during his time with the Legion of Super-Heroes

Lorraine Lewis, a deranged stalker who hunts the other LL’s in Superman’s life in SUPERMAN #204

Lyrica Lloyd, who costars with Clark in a movie about Superman in SUPERMAN #196

Leslie Lowe, a name Jimmy Olsen would use while undercover as a woman

Liza Landis, Clark’s secretary when he takes a new job as a DJ in SUPERMAN’S GIRL FRIEND, LOIS LANE #20

Larissa Lennox, who claims to be the mother of Superman’s child in SUPERMAN #218

Lola-La, a neanderthal woman who Superman nearly marries in a 1993 amnesiac storyline

Lee Lambert, friend and neighbor to Superman in his depowered “Truth” storyline in 2015

Laney Lan and Luo Lixin, two figures in the life of China’s New-Superman

Leslie Luckabee, an actor who poses as Lex’s son in Lois & Clark: The New Adventures of Superman

...And perhaps most importantly, Superman’s own birth mother, Lara Lor-Van.

Finally, I should note that there was at least one significant “LL” to Superman in real life: Leonore Lemmon, fiancee of Adventures of Superman star George Reeves.

RAVIOLI, RAVIOLI, GIVE ME THE FORMUOLI 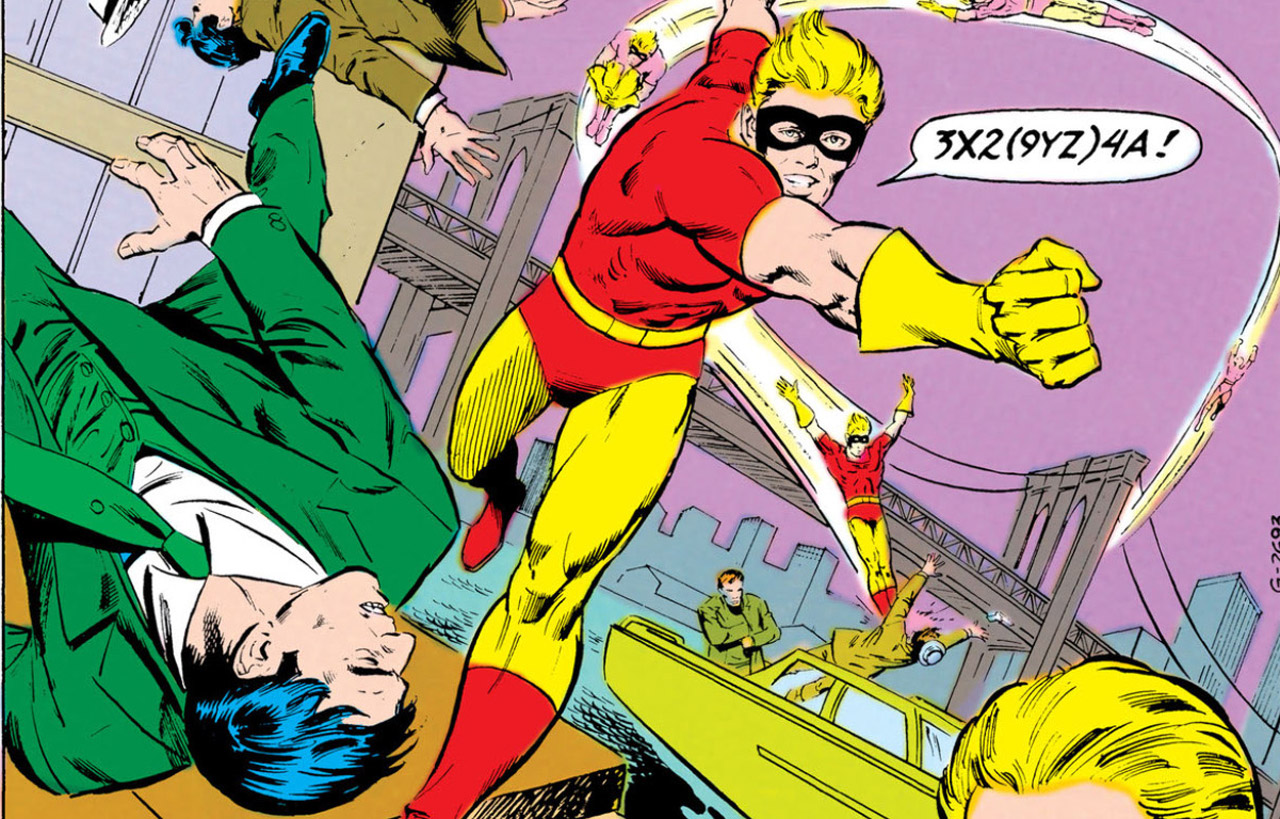 “How exactly does one pronounce 3X2(9YZ)4A - the Speed Formula? And is there any definitive answers as to how exactly that works?” -Numbuh1Nerd

It’s pronounced exactly like it looks -- Three-Ex-Two-Nine-Why-Zee-Four-A. Though I should also note that this “formula” doesn’t really adhere to mathematical grammar, as it were. We have plenty of factors here, but no product. It’s like just shouting “MC Squared!” and suddenly being able to convert your mass into energy. It shouldn’t work, of course. But this stuff comes from the era where, like, Dr. Sivana would recite an equation for intangibility to walk through the walls of his prison cell. Comic writers treated math like magic.

For Johnny Quick at least, the first user of the Speed Formula, some attempt was made to explain how it works. In the original Johnny Quick stories from MORE FUN COMICS, Johnny had been taught the formula by his professor who had seen it inscribed on a Pharaoh’s tomb -- intimating with era-typical exoticism that the “formula” is really more mystical than mathematical. Later appearances by Johnny and his daughter Jesse Quick have established the formula as more of a mantra: a way to focus on their connections to the Speed Force, channeling it by understanding the variables which allow it to work.

Simply put: the Speed Formula works because the people who use it are metahumans. Most metahumans require mental focus to use their powers effectively. For the Quicks, there’s no magic to the Speed Formula: it’s just a focusing tool. 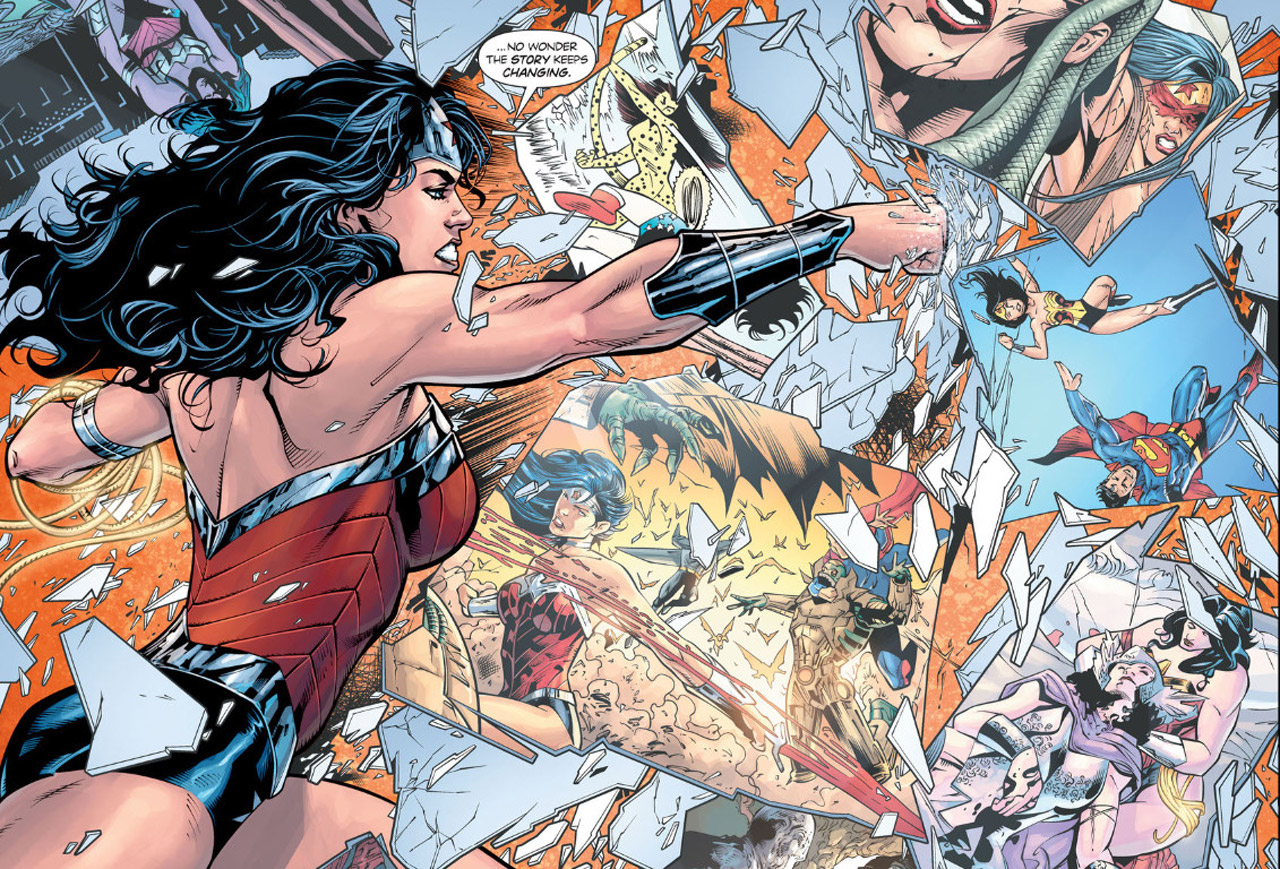 “How many times has DC changed when in the timeline Wonder Woman was introduced to the outside world?” -Clonegeek18

For most of Wonder Woman’s history, Diana has been as subjected as any long-published superhero to what we call the “sliding timescale.” Like any hero, Wonder Woman made her debut a plausible but unspecified number of years ago reasonably more than 5 but probably not much more than 10, and that number remains constant despite how much time might elapse in the real world. Sure, Nazis and a World War II backdrop were important motifs early in her publication, but those elements fell away as time went on as it would no longer be reasonable to assume Wonder Woman had been active for that long -- or at least, such was the thinking at the time. By the Silver Age, the wartime Wonder Woman had been cordoned off as having been active on Earth-Two, while the modern Wonder Woman debuted alongside the likes of Batman and Superman. So, you could say that, like any hero, the time of Wonder Woman’s introduction to man’s world was constantly shifting, to keep her concurrent with the latest generation of heroes and their readers.

The first piece of media to suggest that Wonder Woman had been active since her World War II debut into the modern era decades later was in fact the Wonder Woman television series starring Lynda Carter. This was the result of an attempt to modernize the show after it had already married itself to a wartime setting in the first season, explaining Diana’s presence in ‘70s America as just an effect of the longevity typical of any Amazon warrior. A fine, consequence-free explanation for a continuity where you don’t have to account for the presence of any other heroes in the modern age, and Diana exists alone.

A decade later, the comics moved in the contrary direction with 1985’s CRISIS ON INFINITE EARTHS, shifting Wonder Woman’s appearance even LATER in the timeline. While mainstays like Batman, Superman, and Green Lantern had already been established, and the mantle of Flash had already passed to his former sidekick, a newly reenvisioned Wonder Woman by George Pérez was just starting to find her footing. In 1998, writer John Byrne attempted a compromise with his preferred vision of a long-active Wonder Woman by establishing her mother Hippolyta as the Wonder Woman of the 1940s. With INFINITE CRISIS, Wonder Woman was re-established as a founder of the Justice League alongside the original Silver Age lineup.

With The New 52, Diana was still a contemporary of Superman, Batman, Aquaman, The Flash, and the rest of the A-Listers, but this time they were all younger, having debuted about 5 years prior to the setting of their solo titles. And so it’s remained until DC UNIVERSE: REBIRTH established that those heroes had been missing about 10 years of their history this whole time, and once more as of WONDER WOMAN #750, where Diana’s origin, inspired perhaps by the success of the 2017 Wonder Woman film which casts her once more as an ageless warrior of truth, is once again cast back to World War II, establishing her as the first icon in an age of heroes.

But you specifically asked “how many.” Let’s count the Silver Age as an update from wartime Diana (1), then allow the sliding timescale to keep us consistent until her reintroduction as a new hero Post-Crisis (2), her re-establishment as a Justice League contemporary in INFINITE CRISIS (3), then the de-aging of The New 52, (4), then DC UNIVERSE: REBIRTH, which adds some missing years to her history (5), and finally this most recent origin shift, establishing her as a World War II hero persisting into the modern age for the first time since the 1950s (6).

And that’s all for this week! Make sure to stop by around these parts any time a mystery of the DC Universe penetrates your brainpan and just won’t leave. It’s always a good idea to ASK… THE QUESTION.