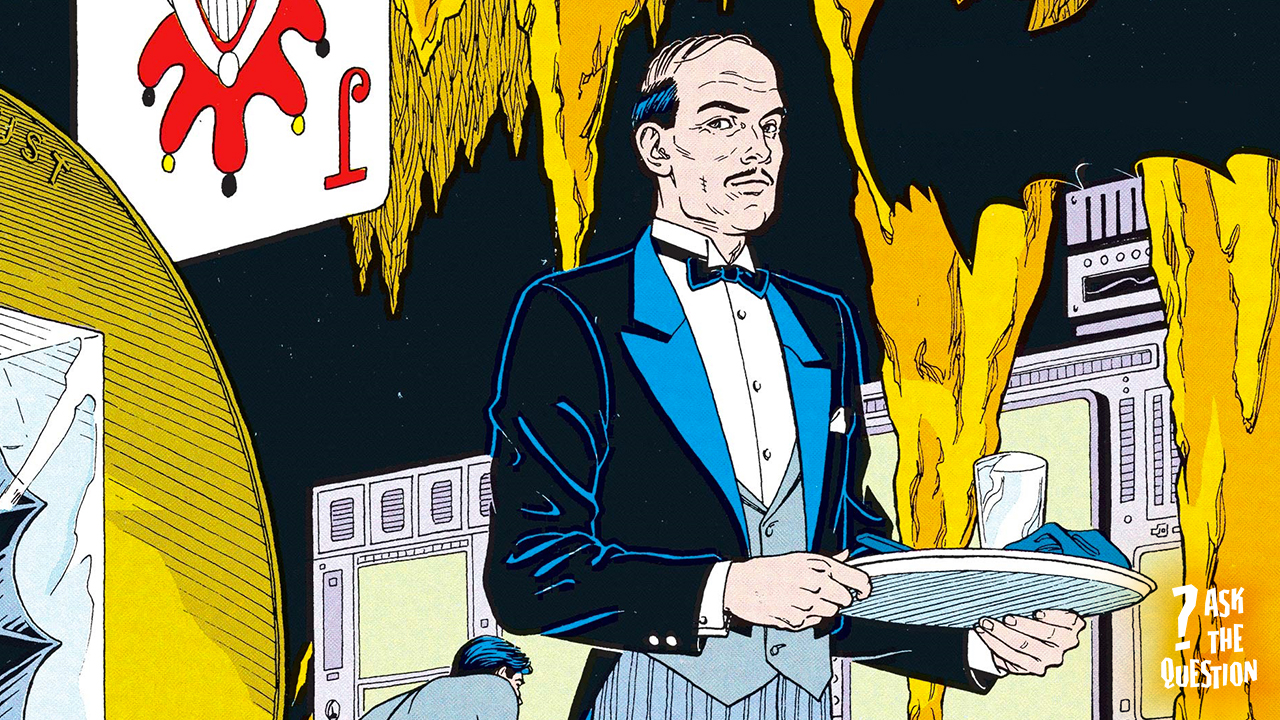 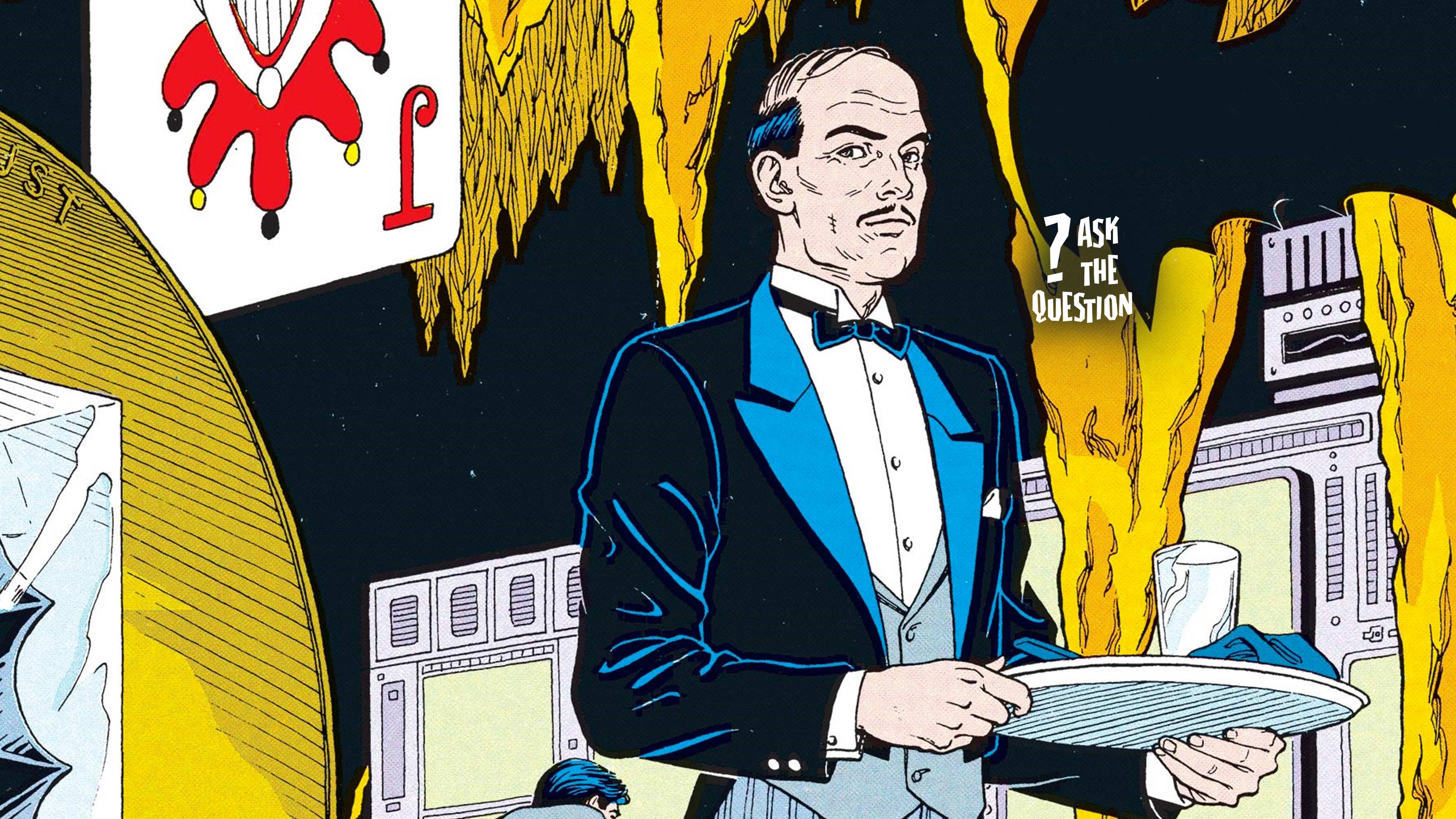 Ask...The Question: How Many Times Has Alfred Died?

Hello. I’m Alex Jaffe, better known in our Community as @HubCityQuestion. My personal mission: to take on any question you have about the DC Universe -- no matter how granular, obscure, or strange -- and present you with an answer. As a faithful steward of the truth, I’m here each week to address these inquiries. Should you be interested in getting your own case heard in our next column, you may do so by voicing it in this thread in our Community. Every week, I will be here to address the most intriguing of these cases to the best of my ability. All YOU need to do is ask… The Question. 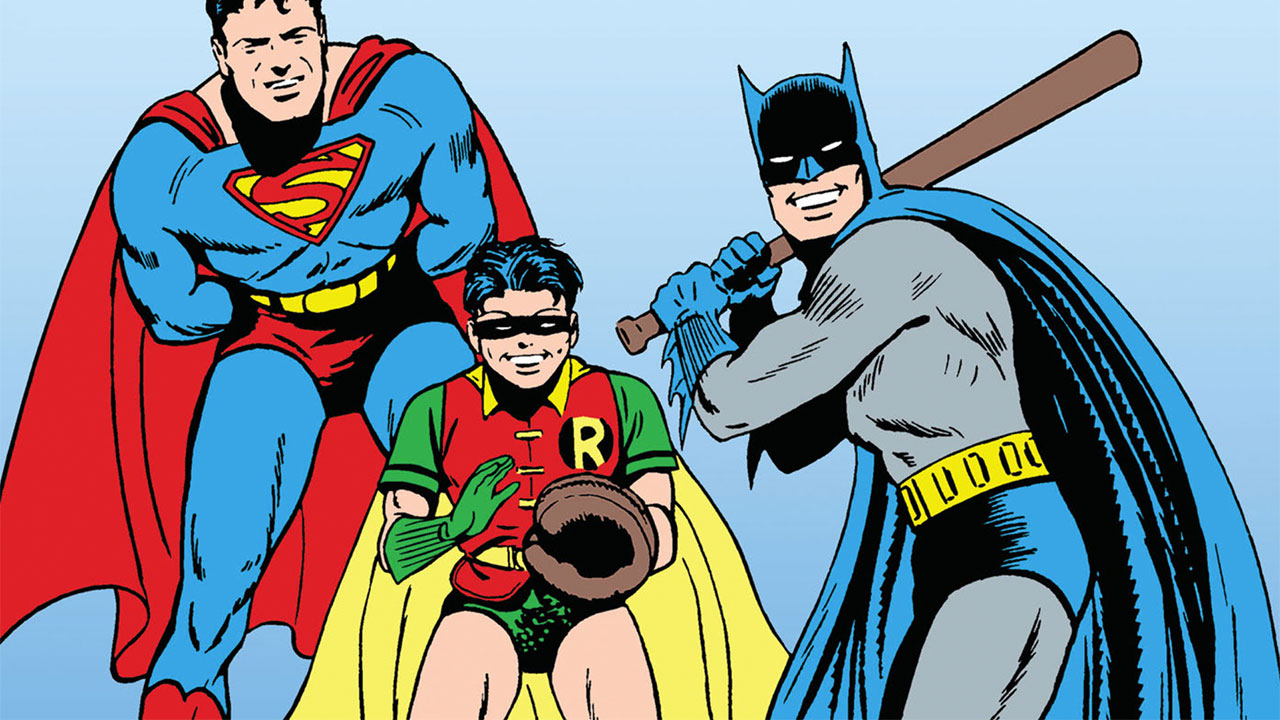 The earliest depictions of Batman and Superman playing baseball together were on the covers of ‘World’s Finest Comics’ #3 in 1941 and ‘World’s Finest’ #15 in 1944. But in those early days, the action on the cover of these anthology comics rarely depicted anything that occurred within the comic itself. Go through each issue and you'll find a baseball is not to be seen.

The first proper Batman/Superman baseball game takes place in ‘DC Super-Stars’ #10. Therein, the Justice League is baited into a game against their greatest villains, when Tigress and Sportsmaster hold a stadium of fans hostage with an ultimatum: win and they go free, lose and they die. In that game, Superman pitched for the League, and Batman was his catcher. This game was recreated for the cold open of the ‘Batman: The Brave and the Bold’ episode “Triumverate of Terror!”

Decades later, for a short story in ‘Superman/Batman Secret Files 2003,’ Jeph Loeb and Tim Sale grounded the characters’ first-ever meeting in baseball. When Bruce and Alfred’s Rolls breaks down while traveling through Smallville, Jonathan Kent comes out to help Alfred with the car while young Clark invites Bruce to come play a game with him.

This encounter proves charming enough to stick around in canon when it’s revisited 10 years afterward, in ‘Batman/Superman’ #3.

Most recently, Batman and Superman faced each other head on for a charming little story in 2017’s ‘Batman’ #37, “Double Date.” While out for a night on the town with Selina and Lois, Batman stood over home plate to prove once and for all that he could hit a pitch thrown by Superman. But does he pull it off…? You’ll have to read on to find out!

THE OLD MAN OF THE SEA 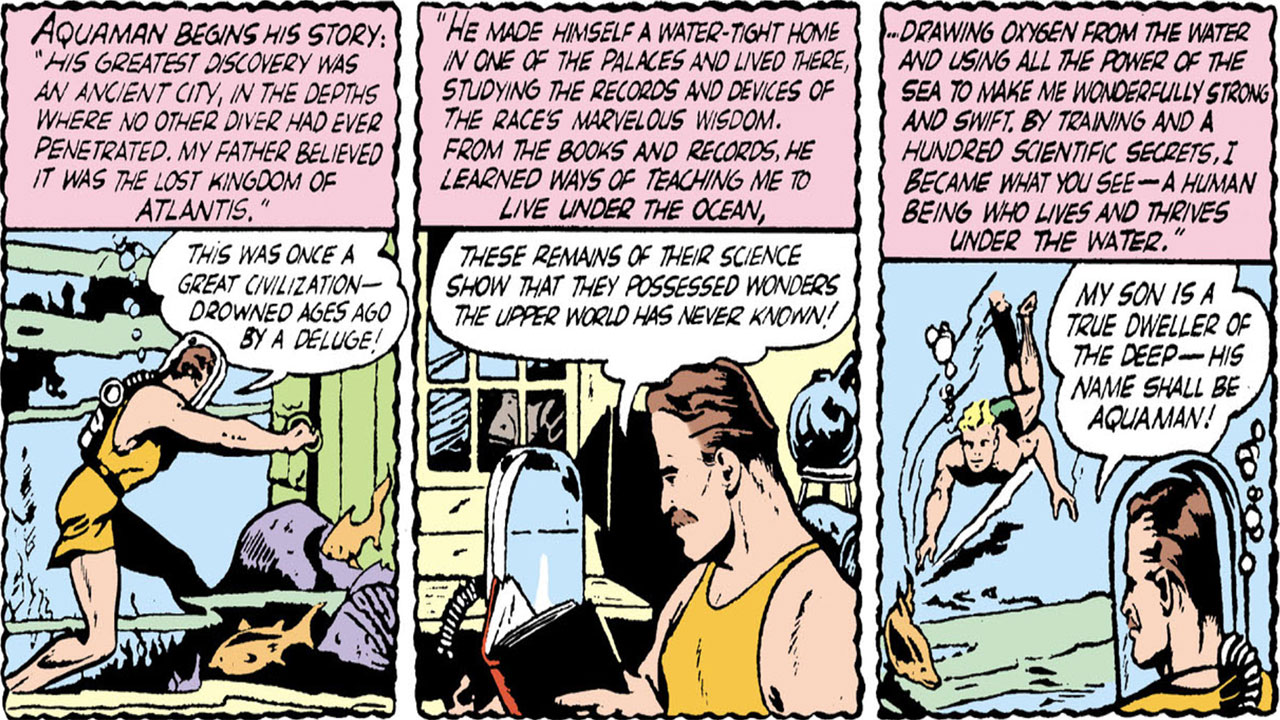 “In the Pre-Crisis era, was there ever an Earth-2 Aquaman? If so, what happened to him? Kal-L and the original Diana both appeared in CoIE, and the Earth-2 Batman had died by then, but I never recall seeing an Aquaman from that Earth. Since Aquaman was, to my knowledge, one of the 4 DC heroes who never went out of print in the pre-Silver Age ‘50s, it seems strange that I’ve never seen him shown on the Golden Age Earth.”

Yes, Mark, there is a Golden Age Aquaman. Although you are correct that Aquaman stories never took a mid-century publication break, Aquaman’s world and backstory expanded throughout the ‘50s until he was essentially a different character.

For instance: while the Golden Age Aquaman worked alone, the Aquaman of Earth-One had a menagerie of Aquapets and worked alongside Aqualad. But perhaps most significantly, whereas Earth-One Aquaman was the rightful king of Atlantis, Earth-Two Aquaman had no biological kinship with Atlantis whatsoever. Rather, the original Aquaman was raised by a famous undersea explorer (“If I spoke his name, you’d recognize it,” this Aquaman claims) who used techniques plumbed from the ruins of Atlantis to teach his son extraordinary abilities.

It’s also worth noting that the Golden Age Aquaman’s name is never given as Arthur Curry, but merely “Aquaman.” I mean it. Go back to his origin in ‘More Fun Comics’ #73, and you’ll see that his father literally named him “Aquaman.”

It can be tricky to draw a line in the murky waters between the adventures of the Golden Age Earth-Two Aquaman and the Silver Age Earth-One Aquaman, but one easy tip-off is the gloves. Gloves be yellow, that’s a Golden Age fellow. Gloves be green, it’s a Silver Age scene.

With all that said, there’s a good reason you haven’t seen Aquaman in most retrospective comics about Earth-Two. In 1979, editor Paul Levitz stated that there was an executive decision that Aquaman was exclusively an Earth-One character, effectively erasing those early yellow-gloved stories out of existence.

Fortunately for ‘More Fun Comics’ devotees, this decision was overturned in the 1980s, where the Earth-Two Aquaman would make occasional appearances overturning Nazi U-Boats once more in the pages of ‘All-Star Squadron’... though this only began to occur AFTER ‘Crisis on Infinite Earths’ (or CoIE), which would explain his absence from the event!

SPOILER WARNING FOR BATMAN #77 AND BEYOND: 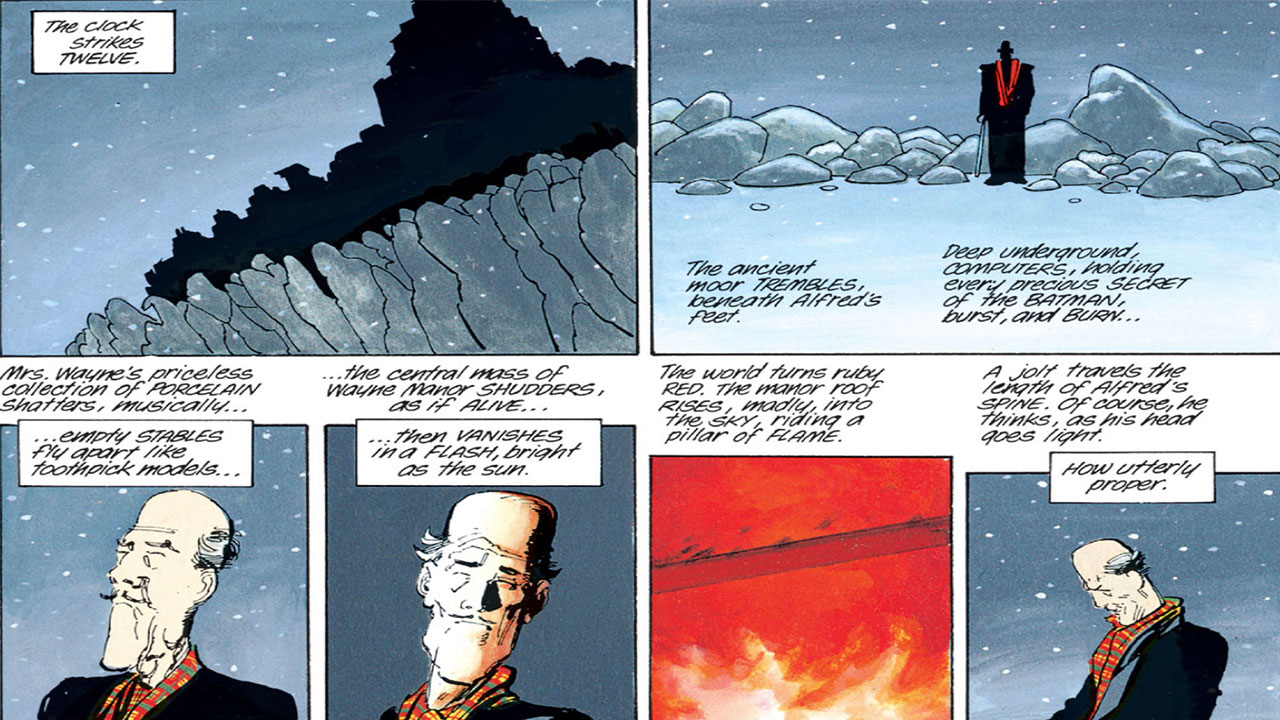 “How many times has Alfred died? Obviously there’s the most recent death, and I think he was killed off when DC was cleaning house with the Batfamily, but are there any other times? I’ve seen references by posters online saying DC does it like every 10 years, but something doesn’t seem right about that.”

Truth be told, apart from the tragedy depicted in the most recent issue of ‘Batman,’ Alfred Pennyworth has only been killed in continuity once before — in 1964’s ‘Detective Comics’ #328, just in time to save Batman and Robin from getting crushed by a giant boulder. (Alfred would return in ‘Detective’ #356 as the amnesiac “Outsider.”)

But it does seem like Alfred dies quite a bit more often than that, doesn’t it? Perhaps that’s because for many years now, killing Alfred has been practically compulsory whenever telling a dark story of Batman outside of the main continuity, or in a possible future. Here’s a chronology of tales which have resulted in the death of the Batman’s batman.

Cause of Death: Stroke, while watching Wayne Manor burn.

Cause of Death: Sinestro.

‘Batman: Shadow of the Bat Annual’ #2

Cause of Death: Killer Moth.

Cause of Death: Exploding laptop.

Cause of Death: Offers his own life as a sacrifice to the vampire Batman.

Cause of Death: Old age.

Cause of Death: Joker’s Daughter.

Cause of Death: Beheaded by Amazons.

Cause of Death: Old age. Held on long enough to save Damian from a series of otherwise fatal injuries. If Damian is to be believed, Alfred’s soul transferred upon his passing into Damian’s pet cat.

Cause of Death: Mr. Zsasz. Note: later, in ‘Injustice 2’ #8, Damian Wayne makes use of a Lazarus Pit to revive Alfred.

Cause of Death: Bane. (Fancy that…)

Cause of Death: Shot by a police officer.

Cause of Death: MacGregor’s Syndrome.

Cause of Death: Captain Atom.

So for those who profess that Alfred is killed off “every decade,” perhaps they’re thinking of ‘Detective Comics’ #328 in the ‘60s, ‘The Dark Knight Returns’ in the ‘80s, the “Red Rain” saga of the ‘90s, and the ‘Titans Tomorrow’ storyline of the ‘00s. I can only guess what manners of circumstance form people’s subjective opinions and experience. But for hard facts, you may always return to my office and ASK... THE QUESTION.