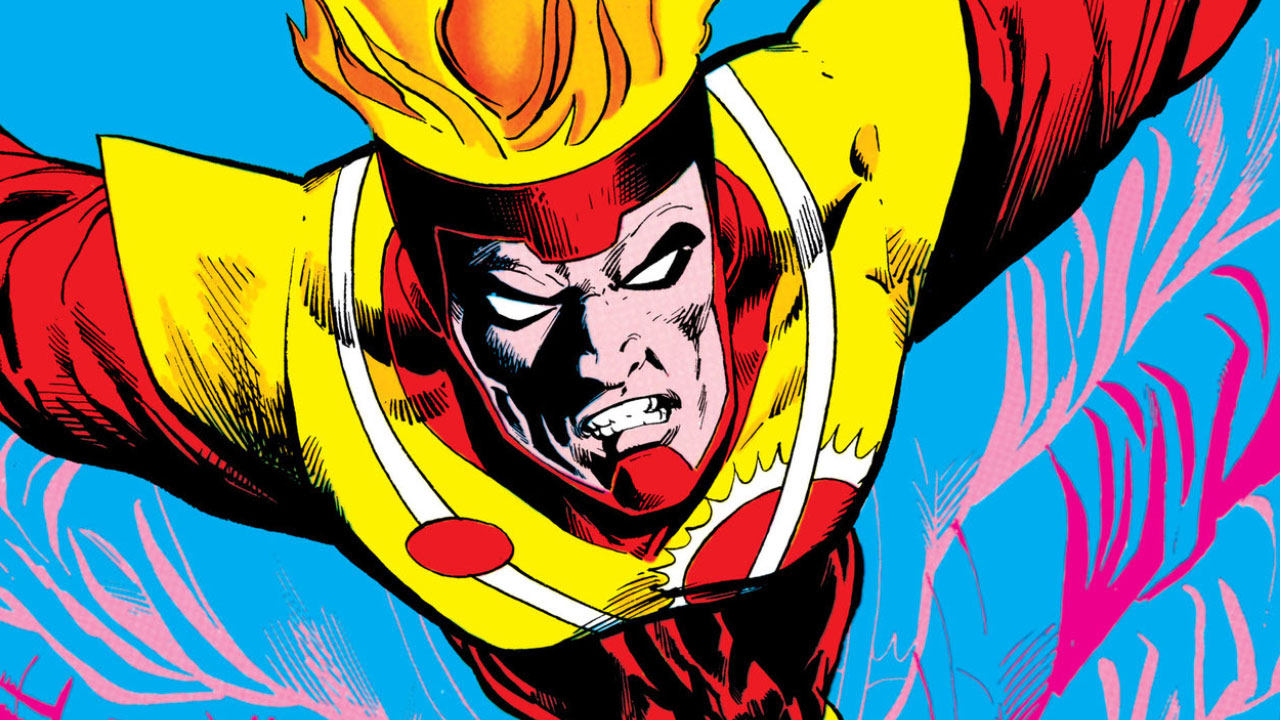 Ask...The Question: How Many Firestorms Are There?

Hello. I’m Alex Jaffe, better known in our Community as HubCityQuestion. My personal mission: to take on any question you have about the DC Universe -- no matter how strange, granular, or obscure -- and present you with an answer. As a faithful steward of the truth, I offer my time in this weekly column to address these inquiries. If you’d like to submit one of your own, you can stop by my office at any time in our Community to state your case, each of which I will in time address to the best of my ability. Let us test those abilities anon. 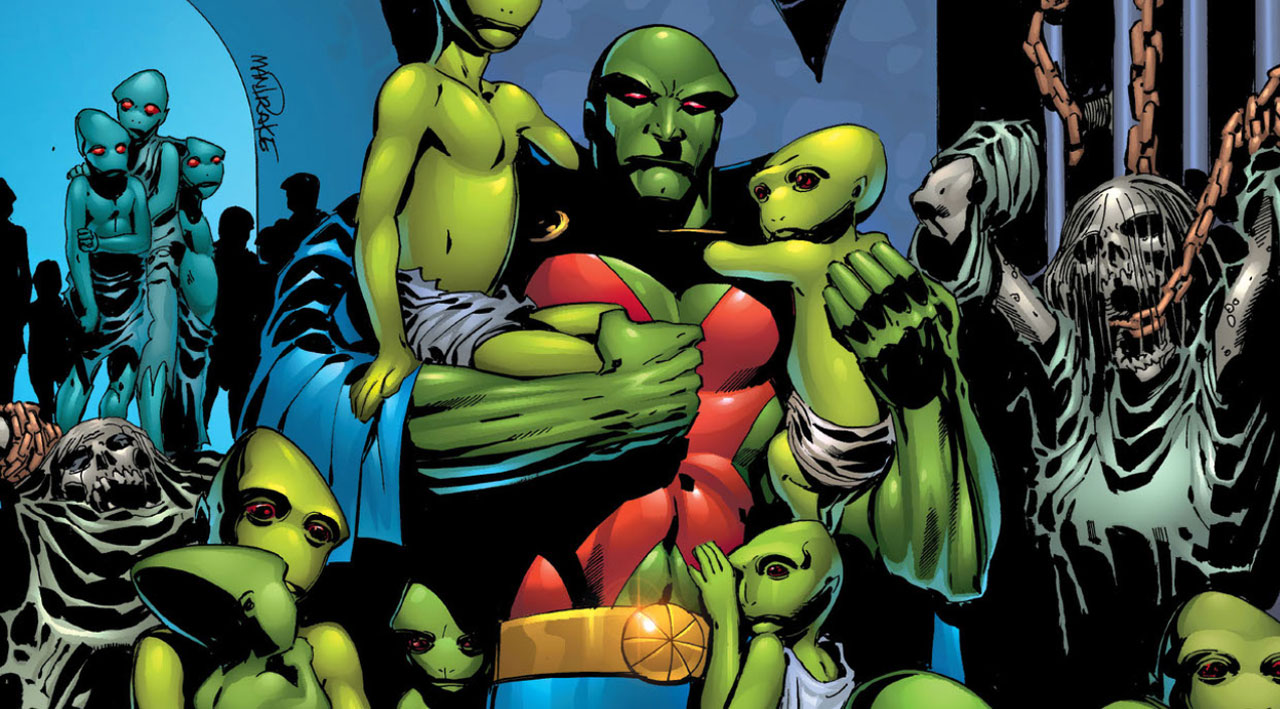 “When did the idea that Martian Manhunter is the last green Martian get introduced? Was it [John] Ostrander’s run?” -Clonegeek18

While many J’onn J’onzz fans consider Ostrander’s MARTIAN MANHUNTER to be the character’s definitive series, his status as the last of his kind does predate that 1998 series. But first, some history as to how we got here:

The origin of Martians in the DC Universe predates the appearance of J’onn by 8 years. In 1947’s BATMAN #41, Batman and Robin are summoned to Mars to help overthrow their tyrant emperor, Sax Gola. Inspired by their heroism, a precursor to the Martian Manhunter we know today by the name of Roh Kar takes up crime fighting in 1953’s BATMAN #78. J’onn himself appears 2 years later, in 1955’s DETECTIVE COMICS #255, accidentally transported to Earth against his will by scientist Dr. Saul Erdel, with no way to return home. For J’onn’s appearances through the next 14 years, no indication is given that there’s anything amiss on Mars, as its wayward son pines for the means to someday return home.

It was in 1969 that a greater tragedy began to loom in the Martian Manhunter’s origin. In JUSTICE LEAGUE OF AMERICA #71, Denny O’Neil revised this Justice League stalwart’s origin story, and introduced the dichotomy of Green Martians and White Martians for the first time. J’onn revealed to his teammates that he had been a military commander in a war between the Green Martians and their aggressive counterparts, led by Commander Benn Blanx. In J’onn’s absence from Mars, Blanx had all but eradicated the Green Martians, with only a few escaping his extermination via escape rockets of J’onn’s own design. With the help of the Justice League, J’onn finally brought Benn Blanx to justice, but would never discover the whereabouts of the surviving and scattered Green Martians.

In 1988, Martian Manhunter’s origin was updated once more for the Post-Crisis era, in a 4 issue limited series written by J.M. DeMatteis. Here, J’onn discovers that Saul Erdel had not only transported him through space, but thousands of years through time… his race having died out entirely over the millennia. Now, truly, the Martian Manhunter was the last of his kind.

Ten years later, Ostrander changed the timeline for a new, Post-ZERO HOUR origin where J’onn was present for the death of his people, caused by a psychic plague begotten by his brother, Ma’alefa’ak. 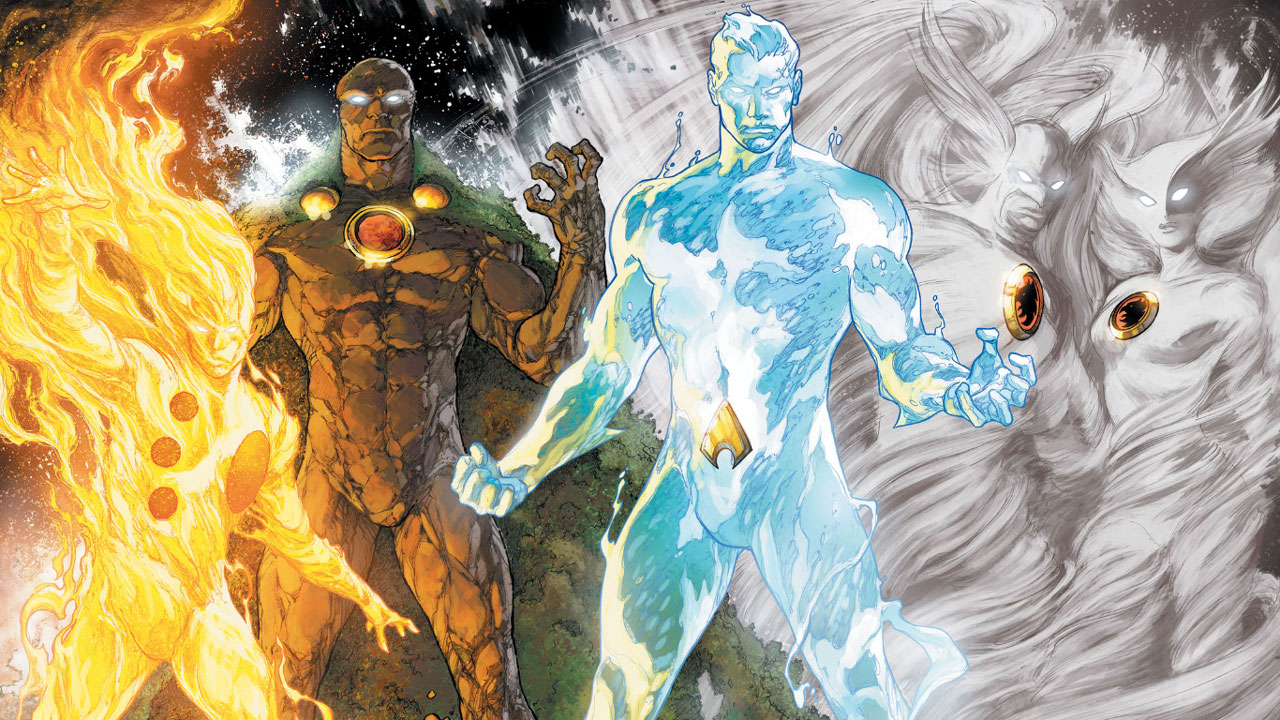 “Okay, so I read through the Brightest Day storyline, which was a fun read and all, but it never explained why Hawkgirl didn’t turn back to normal with the others, and I haven’t been able to find what happens after…??! Is this ever given an explanation or expanded upon?” -RainStormRiddles

You’re not alone, RSR. Hawkgirl’s failure to corporeally remanifest after representing the elemental entity of air along with Hawkman leaves Carter Hall just as flummoxed as you are. But with FLASHPOINT beginning to rewrite Shiera’s status only a month after BRIGHTEST DAY’s conclusion, no time is afforded to explore this mystery.

Look: between you, me, and everyone else reading this column, the secret about the FLASHPOINT event is that it wasn’t always intended to permanently rewrite continuity. The idea to anchor the “New 52” line-wide reboot on it came in the middle of production. In mid-2011, a lot of titles and storylines had to pivot quickly or come to a sudden halt in order to accommodate the oncoming change. Perhaps the reason for Hawkgirl’s absence would have been explored further, if not for The New 52, but the truth is we may never know for sure.

We can, however, make an educated guess. After The New 52, a rebooted Hawkgirl shows up as a supporting character in the EARTH 2 series, set on Prime Earth’s next door neighbor in the multiverse. There, the “elemental” themes of BRIGHTEST DAY and titles such as SWAMP THING before it are explored further. There we meet Sam Zhao, fiancé of Alan Scott, who eventually becomes the Avatar of The White -- essentially, an Air Elemental counterpart to Swamp Thing of our own Earth or Alan Scott himself as the Green Lantern of Earth 2. Like Hawkgirl in BRIGHTEST DAY- or, perhaps as a more familiar example, Swamp Thing in most other stories- Sam remains dead after he is killed as a train crash, but continues to exists as a conscious, incorporeal entity afterwards in his capacity as a representative of The White. It wouldn’t be unreasonable, therefore, to retroactively assume that Hawkgirl had previously been chosen for the same destiny.

THE LIONEL BE DRAWN HERE 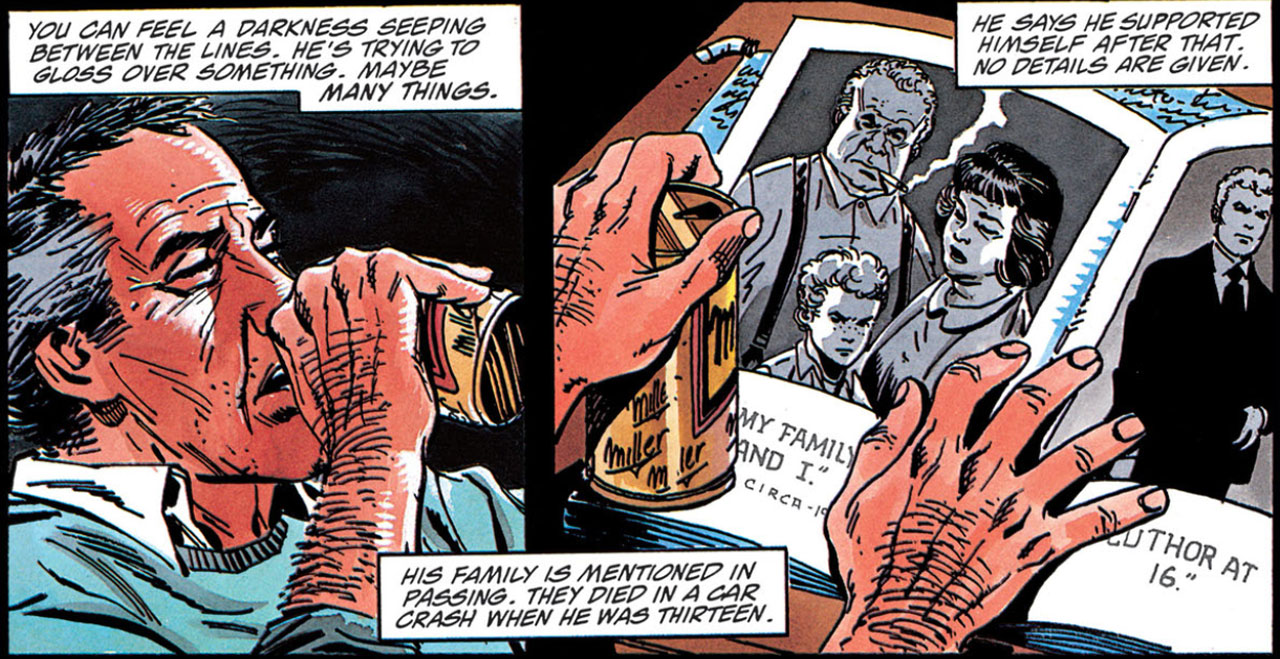 “Lionel Luthor has become a major part of the DC Universe. He is fairly new as far as I know. Did he first appear in the comics or is he another example of media creep?” -a2.ton.51072

The father of Lex Luthor and founder of LuthorCorp (later, LexCorp) rose to a place of prominence in the DC multiverse after John Glover played him for seven seasons of Smallville. Recently, JUSTICE LEAGUE, “Year of the Villain,” and DEATH METAL writer Scott Snyder has drawn upon that legacy by casting him as a central figure to the continuous story being told of Luthor, the League, and the Legion of Doom since 2018.

But with 82 years of history behind the Man of Steel, it’s hard to imagine that Luthor never had a father until John Glover -- especially since Pre-Crisis comics like ADVENTURE COMICS and SUPERBOY spend so much time with young Clark, who had a close friendship with young Lex himself for a time. Lex Luthor’s father appears for the first time in SUPERMAN’S GIRL FRIEND, LOIS LANE #23, the story which first gives us Lex’s younger sister, Lena. There, Lex’s father is named Jules, but he and Lex’s mother Arlene changed their last names to “Thorul” in shame so that he wouldn’t be associated with his criminal son. They were killed off in a car crash during their first appearance, at which point Lena was put up for adoption.

The next significant reimagining of Lex’s father is a brief aside in Superman: The Movie. Though he never appears on screen, and is never named, Lex speaks of him as a cold, austere figure who, like Jules Thorul, threw him out of the house -- but who also inspired his pursuit of profit in the real estate market.

Luthor’s parents were reinvented in 1989, when reporter Peter Sands compiled LEX LUTHOR: THE UNAUTHORIZED BIOGRAPHY. Now named Lionel Luthor, Sands depicts Lex’s father, as in Superman: The Movie, as a harsh parent with little appreciation for his son’s intelligence. But Sands also reveals that the car accident which took his life was no accident at all. Luthor’s secret origin was the large life insurance policy he took out on his own parents before engineering their deaths, the payout from which became the seeds of Lex’s fortunes after growing up poor.

The idea of “LuthorCorp” originally being Lionel’s company, however, is an invention which may be attributed to Smallville. 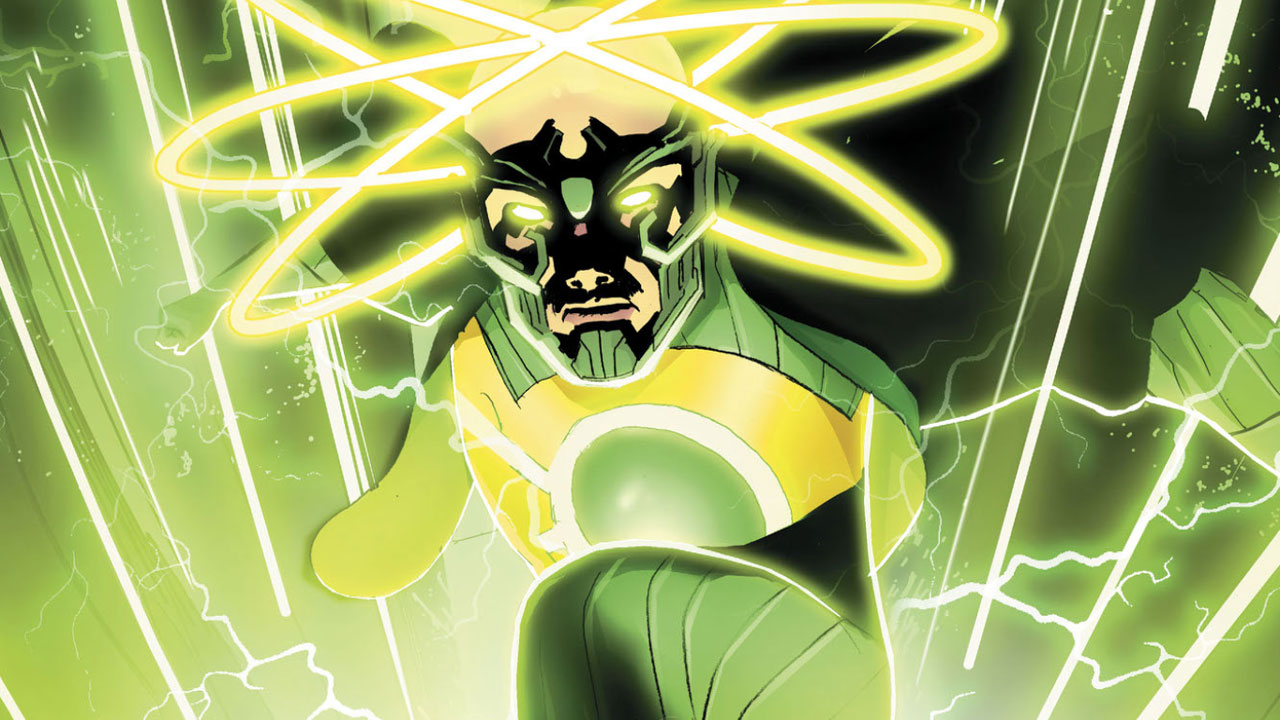 “How many different people have made up the Firestorm matrix over the years, anyhow?” -Wrightline1.42741

Created in 1978, Firestorm, “The Nuclear Man,” has always been imagined in part as a manifestation of our own anxieties over looming nuclear war, and the proliferation of nuclear weaponry. The “Firestorm Matrix” usually requires two people to form a gestalt being with incredible atomic power, starting with high school student Ronnie Raymond and Firestorm Matrix inventor Dr. Martin Stein. In the ‘80s, John Ostrander doubled down on Firestorm as analogous to the tensions of the Cold War by fusing Ronnie with his Russian counterpart, Mikhail Arkadin -- otherwise known as Pozhar. The situation became more complicated as the series progressed when Firestorm became a triad of Raymond, Arkadin, and Arkadin’s own Soviet clone, Svarovich. In 2004, Raymond was killed in IDENTITY CRISIS, and a new Firestorm took his place, high school student Jason Rusch. As Firestorm, Jason had a number of partners, including Ronnie’s girlfriend Lorraine Reilly (alias Firehawk), best friend Mick Wong, and his own girlfriend, Gehenna. Wong was killed during INFINITE CRISIS, and Gehenna during BLACKEST NIGHT. But when Ronnie Raymond returned in BRIGHTEST DAY, he and Jason united to become the new Firestorm. So it was until the REBIRTH era, where Raymond and Professor Stein were reunited as Firestorm once more.

Technically, though, you could say the entire Justice League has been part of the Firestorm Matrix -- since the “Deathstorm” of Earth 3 imprisoned them within it for the Crime Syndicate of America’s takeover of Prime Earth in “Forever Evil.”

For the sake of completionism, I should note the alternate universe or possible future Firestorms. COUNTDOWN: ARENA presents a hero known as “Quantum-Storm,” where Ronnie Raymond and Captain Atom are fused together in the Firestorm Matrix. In TV’s “Arrowverse,” football player Jefferson “Jax” Jackson fuses with Professor Stein to form Firestorm after the death of Ronnie Raymond. Briefly, Jax’s role in the Firestorm matrix is usurped by Soviet agent Valentina Vostok. And lastly, there’s the surprising Firestorm of the distant possible future of ELECTRIC WARRIORS, who is revealed in actuality to be -- well, I shouldn’t say. Read it yourself and find out.

That’s all the time we have for this week. Join me next time after DC FANDOME, where I’m sure you’ll have a brand new list of questions regarding all that’s been revealed. As always, I warn you that I can’t predict the future, but I do see much of the past and present. And as it turns out, that’s usually enough. All that you have to do on your part is ASK… THE QUESTION.