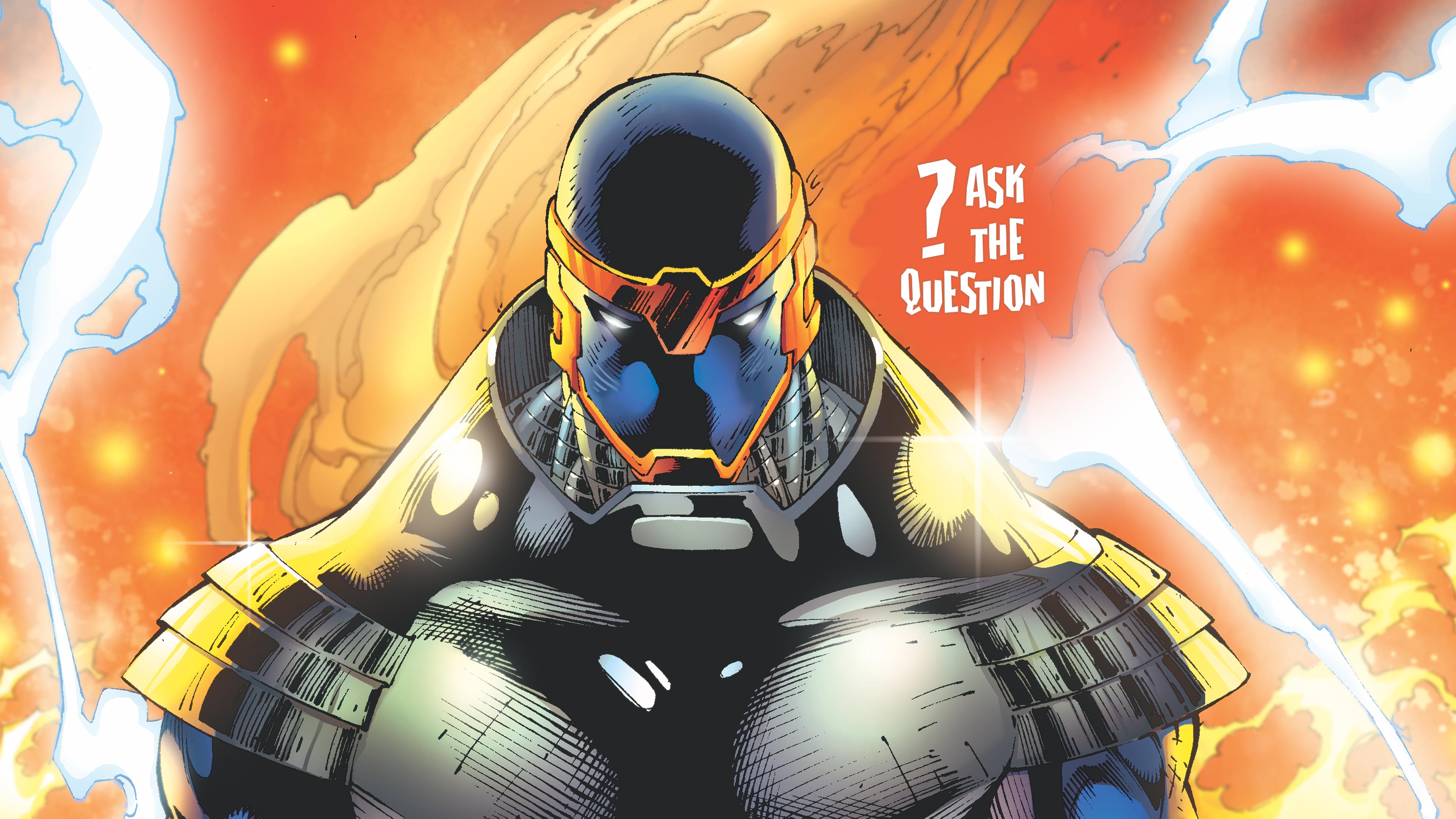 Ask...The Question: How Many Different Monarchs Have There Been?

Hello. I’m Alex Jaffe, better known in our Community as @HubCityQuestion. My personal mission: to take on any question you have about the DC Universe -- no matter how granular, obscure, or strange -- and present you with an answer. As a faithful steward of the truth, I’m here each week to address these inquiries. If you’d like to submit one of your own, you can stop by my office at any time in our lively Community to state your case, which I will address in turn to the best of my ability. All YOU need to do is ask… The Question.

MONARCHY IN THE DC 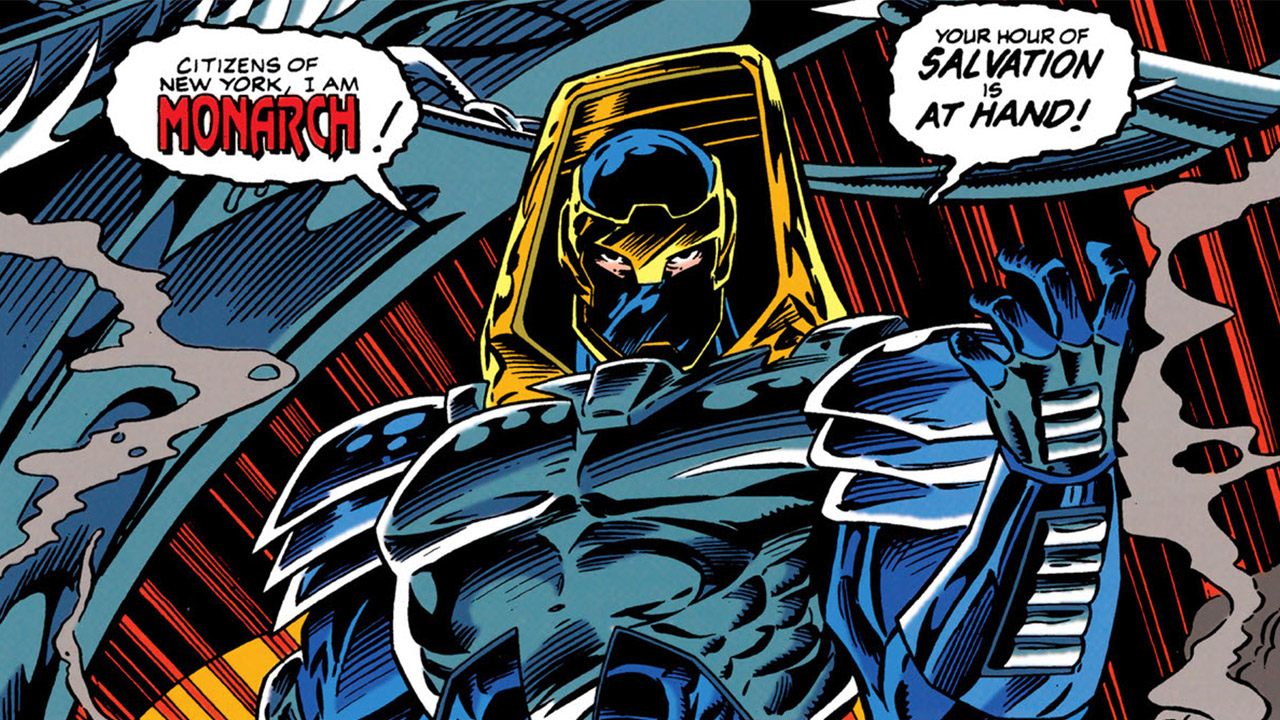 “This may be above your pay grade but… I cannot keep the history of Monarch correct. I know there were more than one but when did they swap and why? What happened to the character this side of Flashpoint and Rebirth?”

Nothing is above my pay grade, TBoNML. But your concern isn’t unsound. The mantle of the mighty Monarch, a major villain of DC event comics ranging from 1991 to 2008, has actually been held by somewhere between one and three entities, depending on your perspective.

The original Monarch was introduced in Armageddon 2001, a 1991 event where the time-traveling Waverider attempts to prevent the despotic Monarch, the menace of tomorrow, from rising to power, killing the world’s heroes, and conquering the planet.

Now, here’s where things get tricky. For the duration of the event, the true identity of The Monarch was a mystery. As the series was published, Armageddon 2001 was building to the reveal that The Monarch was, in fact, Captain Atom, one of the most powerful heroes in the DC Universe. But when this reveal was leaked prematurely, the story was quickly changed so that The Monarch would turn out to be Hank Hall, better known as Hawk of the crimefighting duo Hawk & Dove. This was a point of great controversy at the time, with this denouement directly conflicting with previously established story details. But hey -- where time travel is involved, things can get very wacky pretty fast.

Eventually, though, the mantle makes its way back to its originally intended bearer. After a climactic battle with Captain Atom, Hank Hall is stranded in the timestream with his Monarch armor. Some time later- at least, from Hank’s relative perspective- The Monarch receives a visitor in the form of Nathaniel Adam, the man who would have otherwise become Captain Atom.

Let me explain: as it turns out, the original quantum experiment which turned Nathaniel Adam into Captain Atom in the 1960s actually divided him into two distinct entities — only one of which would become the Captain Atom we know today. This other, discarded Nathaniel Adam teaches Hank how to manipulate the Quantum Field, allowing him to escape. In return, Hank gives Nathaniel his Monarch armor to return home on his own.

In the exceedingly ‘90s Extreme Justice, this new Monarch debuts as a hero, engaging in a rivalry for glory and affection with our own Captain Atom. It’s Booster Gold, of all people, who discovers this Monarch’s true designs on world domination and takes him down for good.

Hank Hall returns as The Monarch one last time in Zero Hour, at which point he absorbs the time traveling capabilities of Waverider, and takes on the new mantle of Extant. After years of confrontation with Hourman and the JSA, Extant was eventually killed when he was teleported by Metron and Hourman into a plane crash. Hank would return as his old, uncorrupted self upon his resurrection at the end of Blackest Night.

But that wasn’t the end for The Monarch. In Countdown to Final Crisis, our own Captain Atom is corrupted by one of the Monitors into becoming The Monarch, as the creative forces of Armageddon 2001 originally intended. This iteration of Captain Atom sought to reverse the “mistake” of the Multiverse, consolidating all realities into a single world which he could rule over with an army culled from all 52 worlds in existence. This effort culminates in an all-out battle with Infinite Crisis big bad Superboy-Prime, which causes The Monarch to explode and revert to his original state. Since then, Captain Atom claims to have no memory of his twisted time as The Monarch.

As for where he is now? Well, Hank Hall has been out of the spotlight for the Rebirth era, though he and Dove still patrol Washington DC as the city’s protectors. Captain Atom, meanwhile, is a reserve member of the Justice League, currently pitching in to help the world’s greatest heroes in their “Doom War” against the combined forces of Lex Luthor. And, thankfully for some, no one has bore the visage of The Monarch since his downfall in 2008. 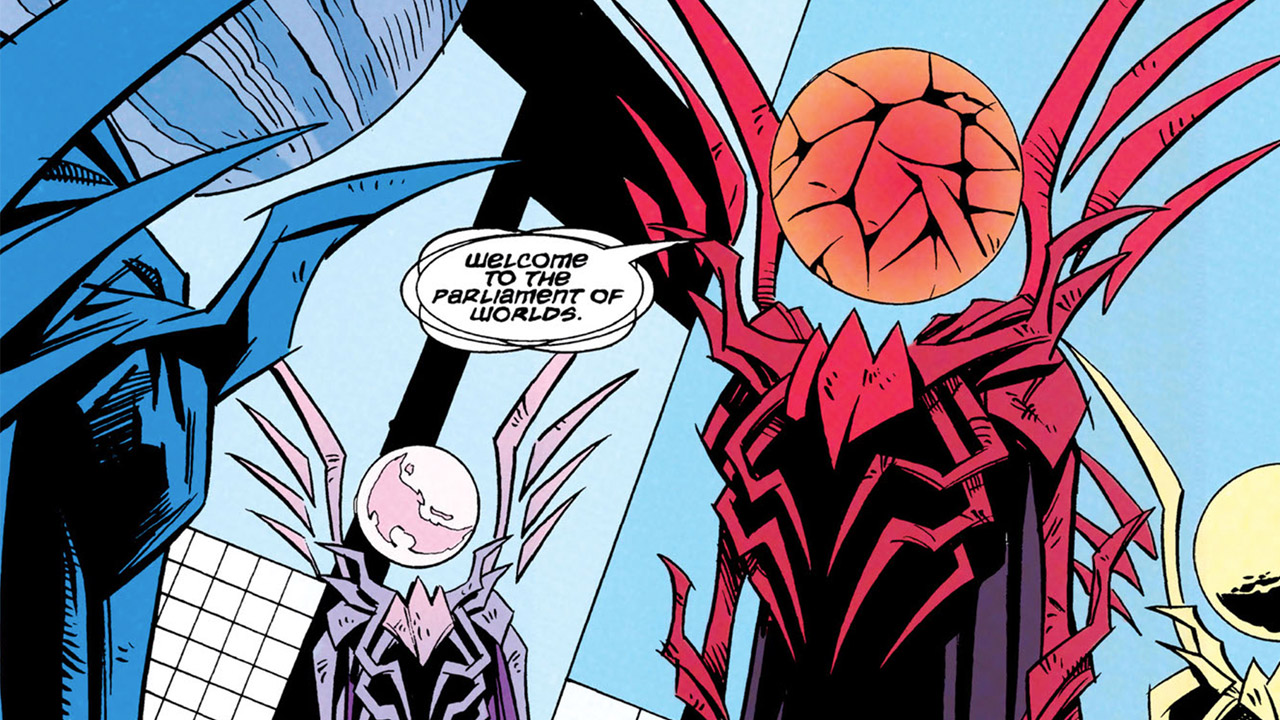 “If there’s a Green for plants, a Clear for aquatic life, and a Red for land life, then what accounts for the forces of machinery or death?”

All right, let’s run through this real quick. The elemental forces of the DC Universe: a primer.

The DC Universe features a whole range of elemental forces as sort of sub-planes of reality to our own, all of which govern and unite different living aspects of the universe. Not quite science, and not quite magic, these elemental planes can be interacted with and manipulated by those who are particularly attuned to them. The first and most famous example of this relationship would be Swamp Thing, the chosen Avatar of The Green — the plane which unites all plant life.

As of this moment, we are aware of the existence of at least nine of these elemental planes, which I will enumerate here.

The Green is the plane which unites all plant life on a metaphysical level, and the only elemental plane we were aware of for some time. The Green often employs an Avatar to represent its interests on Earth- known to us as Swamp Thing- and is overseen by a conglomerate of retired Avatars known as the Parliament of Trees.

The Red was introduced in Animal Man as a counterpart to The Green, uniting all animal life where The Green unites all plant life. Like The Green, The Red is also known to employ an Avatar. In the past, this role has been assumed by Animal Man himself, as well as his young daughter, Maxine. It is overseen by the Parliament of Limbs.

Not quite plants and not quite animals, the kingdom of fungus has its own planar representation in The Grey. The Grey has no Parliament, and (usually) no Avatar — it desires only to spread, proliferate, and consume. (Sometimes, “The Grey” is used interchangeably to refer to “The Rot,” also known as “The Black.” However, more prudent storylines depict The Grey and The Rot as discrete forces.)

The Melt represents a concern not usually thought of as life: that of the earth itself. It is said that billions of years ago The Melt and The Green were once one and the same, but The Green broke apart as plant life emerged and gained sophistication. Now, The Melt represents the parts of the world left behind by evolution: the rocks, the soil, and the foundation of the planet itself upon which life proliferates. It is overseen by the Parliament of Stones. 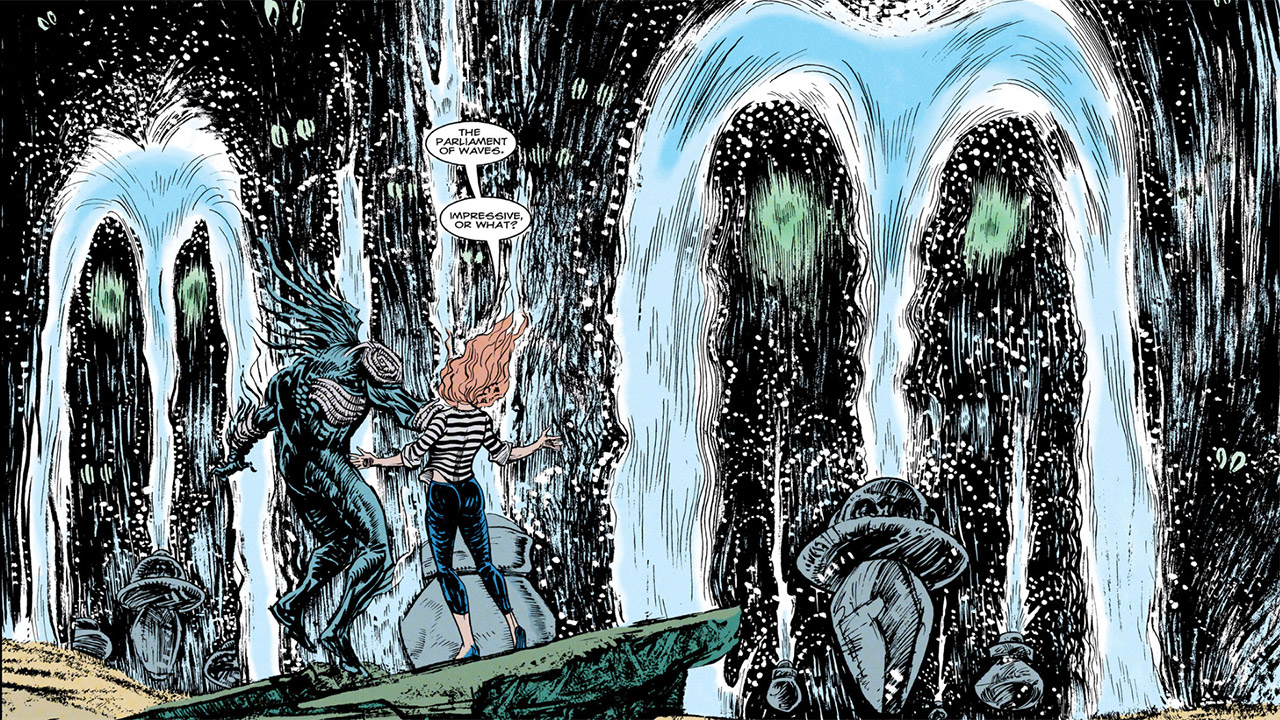 Introduced much later in Swamp Thing’s run and overseen by the Parliament of Waves, The Clear- also sometimes (erroneously) called The Blue- lies somewhere between The Red, the Green, and the Grey in purposes, uniting all life, be it plant or animal, which calls the ocean its home. While The Clear does not necessarily employ an Avatar, Aquaman has been shown to tap into this plane in order to use his powers, and represents The Parliament’s interests in much the same way an Avatar would.

The Rot, also called The Black (or, on occasion, The Grey) is the elemental force of death. Whereas most other forces vie for control and representation in their particular classifications of life, The Rot deals only in death. As time marches forward, The Rot only grows in power, as all things in the universe succumb to entropy. It is overseen by the Parliament of Decay, and like The Red and The Green, employs an Avatar. This role was once filled by Swamp Thing’s nemesis, Anton Arcane — though it is now occupied by Anton’s niece and Swamp Thing’s lover, Abigail. 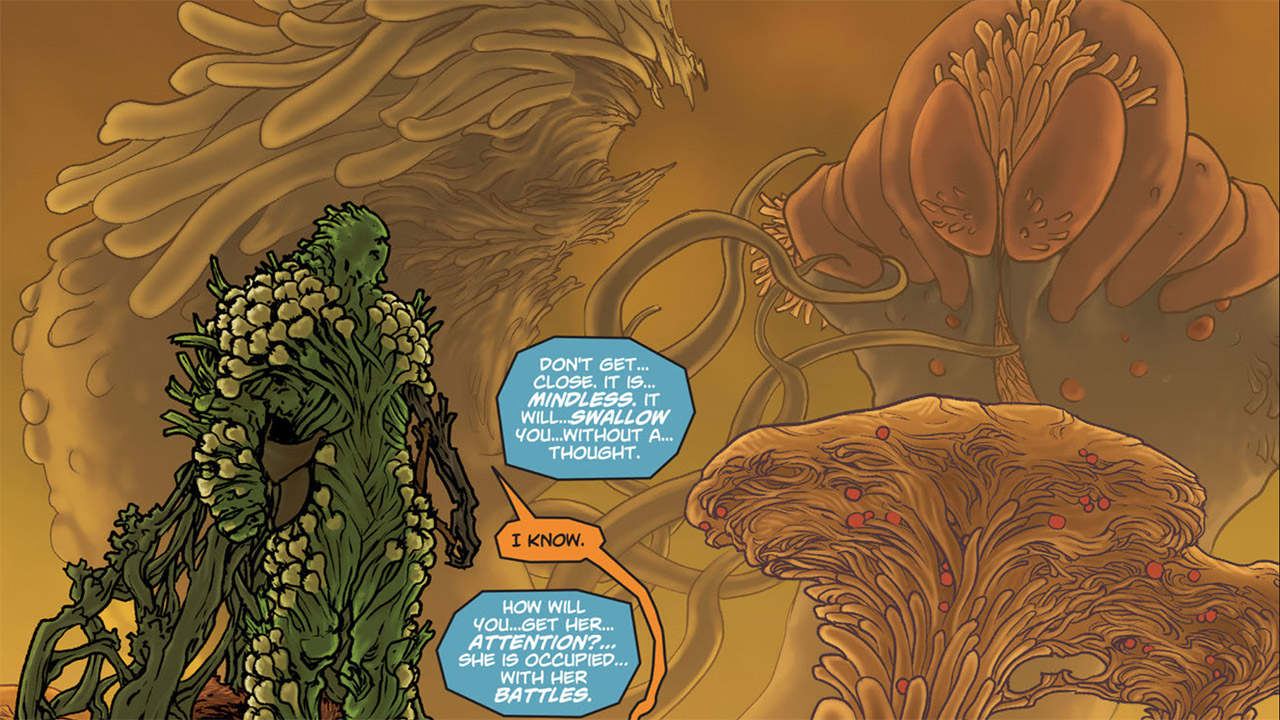 For the biologists in our audience, we know that living organisms as we recognize them don’t stop at animals, plants, and fungi. There’s also two entire kingdoms of bacterial life, both of which are accounted for by The Divided. The major pressing issue for The Divided is humanity’s development of antibiotics, which they see as an act of war. Hence, the proliferation of antibiotic-resistant bacteria in recent years.

The newest of the elemental planes, The Metal only came into existence quite recently with the emergence of artificial life. It is overseen by The Rithm, a confluence of artificial intelligences which have achieved singularity. The Metal found its first Avatar in Lady Weeds, a former Avatar of The Green — who would rechristen herself as Machine Queen. 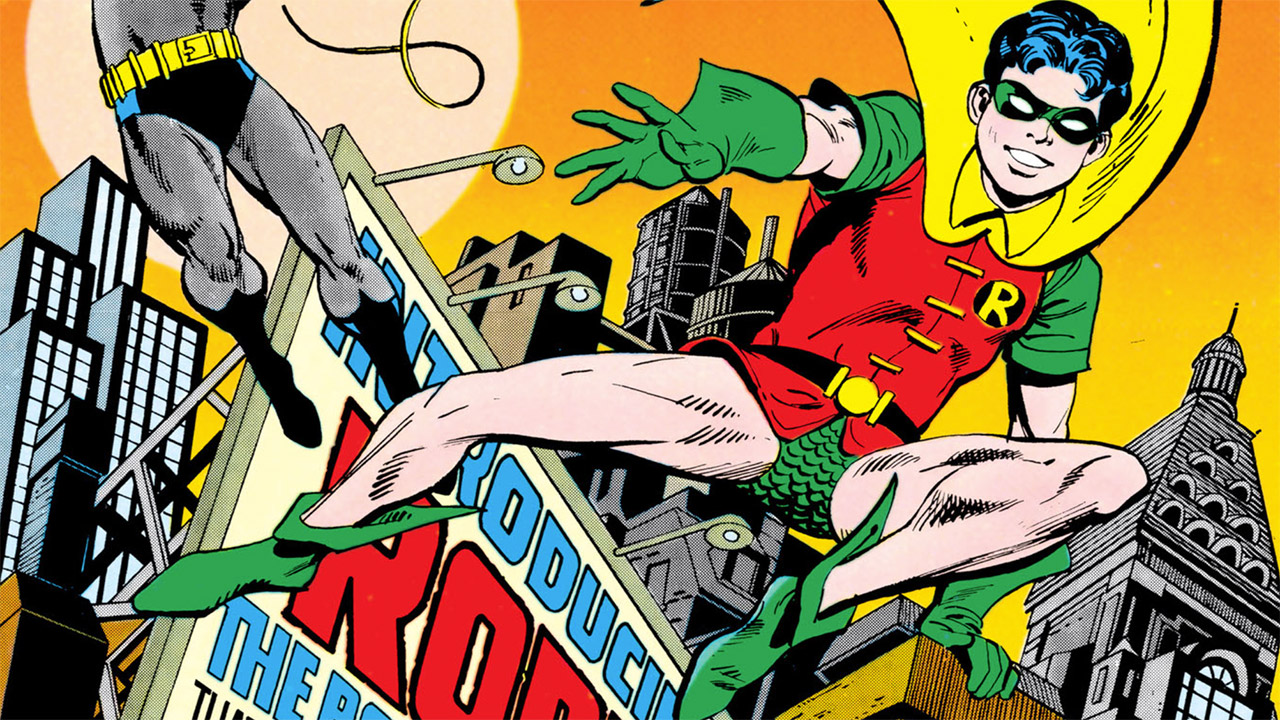 “Hey there Mr. Question! First of all let me congratulate you on an awesome column! I love reading it. And secondly, my question to you! I must know: Did Jason Todd wear Dick Grayson’s old tights, or did he get his own brand new pair of tights when he became the second Robin?”

Your question is a reasonable one: after all, it was one of some concern to young Master Jason himself. The  precise answer also depends on which version of Jason Todd you’re talking about: the original circus raised Pre-Crisis version, or the Batmobile tire-boosting Post-Crisis version.

Before CRISIS ON INFINITE EARTHS, the red-headed Jason Todd spent much of his early time as Batman’s new ward simply trying to prove he was ready to mix it up in the field. Tired of waiting, Jason took matters into his own hands in Batman #366 by making off with a spare costume from Dick’s closet, dying his hair black, and helping Batman take on The Joker. Two issues later, Dick gave Jason his blessing to continue on as Batman’s new Robin, while Dick stayed with the New Teen Titans to forge his own legacy. As you noted in your original submission, there are some minor cosmetic differences between Jason’s Pre-Crisis costume and Dick’s. But these can be attributed, if not to the discretion of Batman #368 artist Don Newton himself, then to alterations necessary upon updating the costume for a new wearer.

After the crisis, we have a completely different story. The Jason Todd who appears after the massive continuity reboot of 1986 is similar to the original in name only. And, I suppose, the fact that Bruce Wayne takes him in and he becomes Robin. But APART FROM THAT, they’re pretty much completely different kids named Jason Todd. This version spends far less time waiting around for his in-costume debut, donning his uniform for his second appearance in Batman #410. After an issue-long montage where Batman prepares his new partner for their war on crime, their training session concludes when Batman presents Jason with a brand new set of duds. Jason’s reaction is presented here: 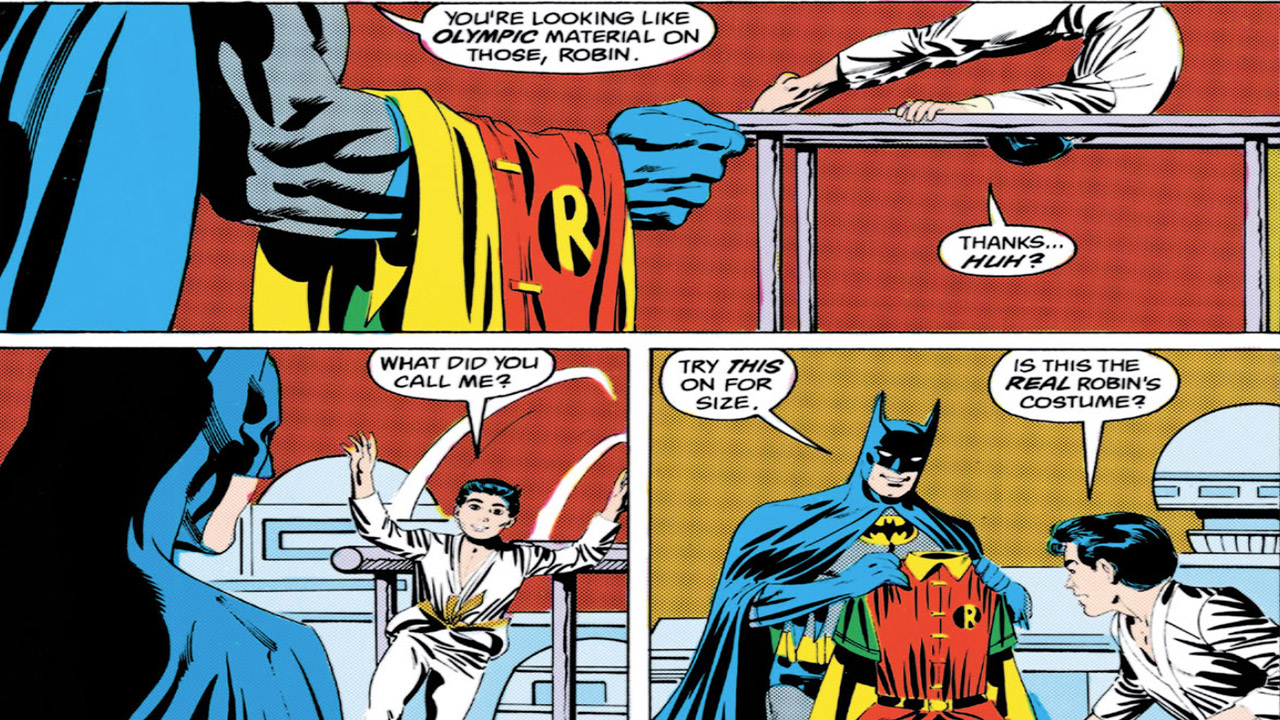 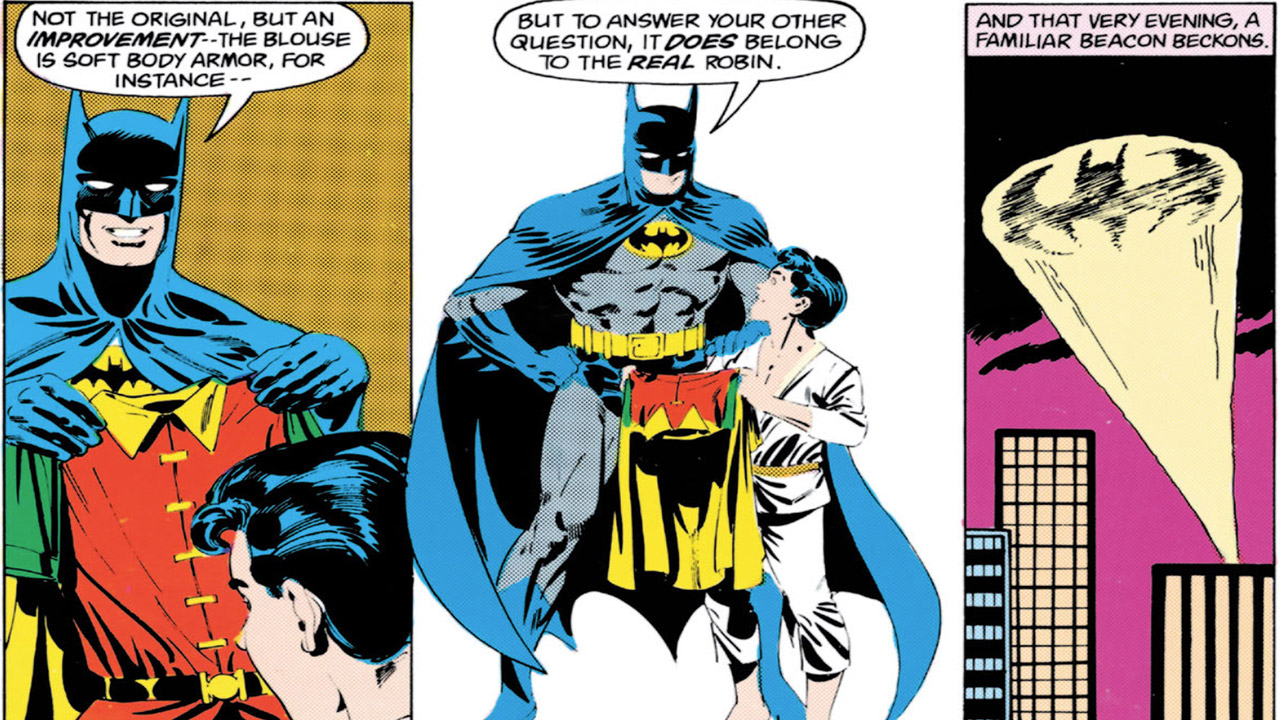 Similarly, yours truly may not be Vic Sage, but I’d like to consider myself the real Question. And for all your DC dilemmas, I remain ever present for the asking.