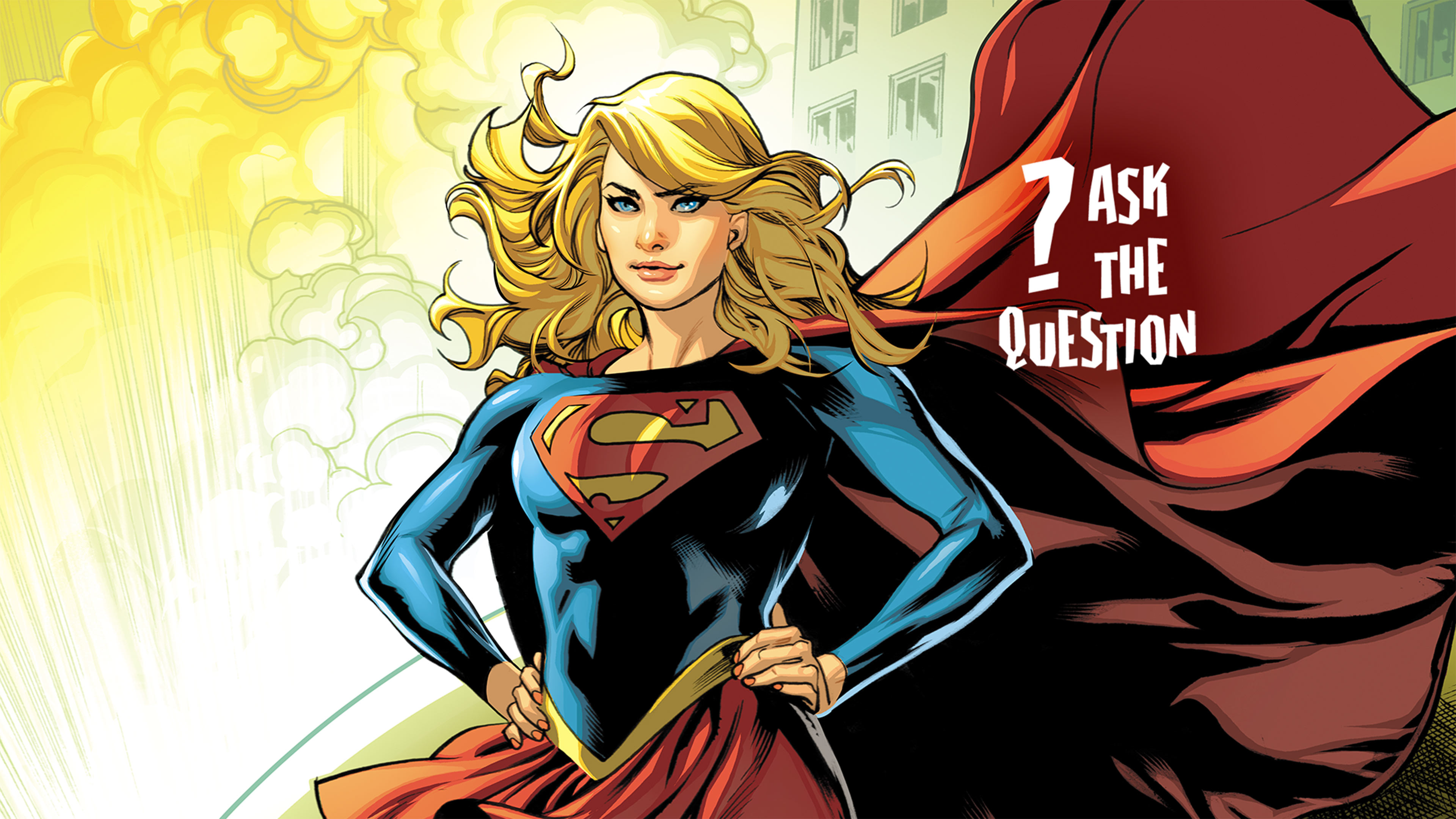 Ask...The Question: How Does Supergirl Cut Her Hair?

Hello. I’m Alex Jaffe, better known in our Community as HubCityQuestion. My personal mission: to take on any question you have about the DC Universe -- no matter how strange, granular, or obscure -- and present you with an answer. As a faithful steward of the truth, I offer my time in this weekly column to address these inquiries. If you’d like to submit one of your own, you can stop by my office at any time in our lively Community to state your case, which I will address in turn to the best of my ability. In these hours of dire need, I remain your vigilant detective through the comic book cosmos to discover the answers you crave. Let’s see what secrets are ripe for the plucking in this week’s column. 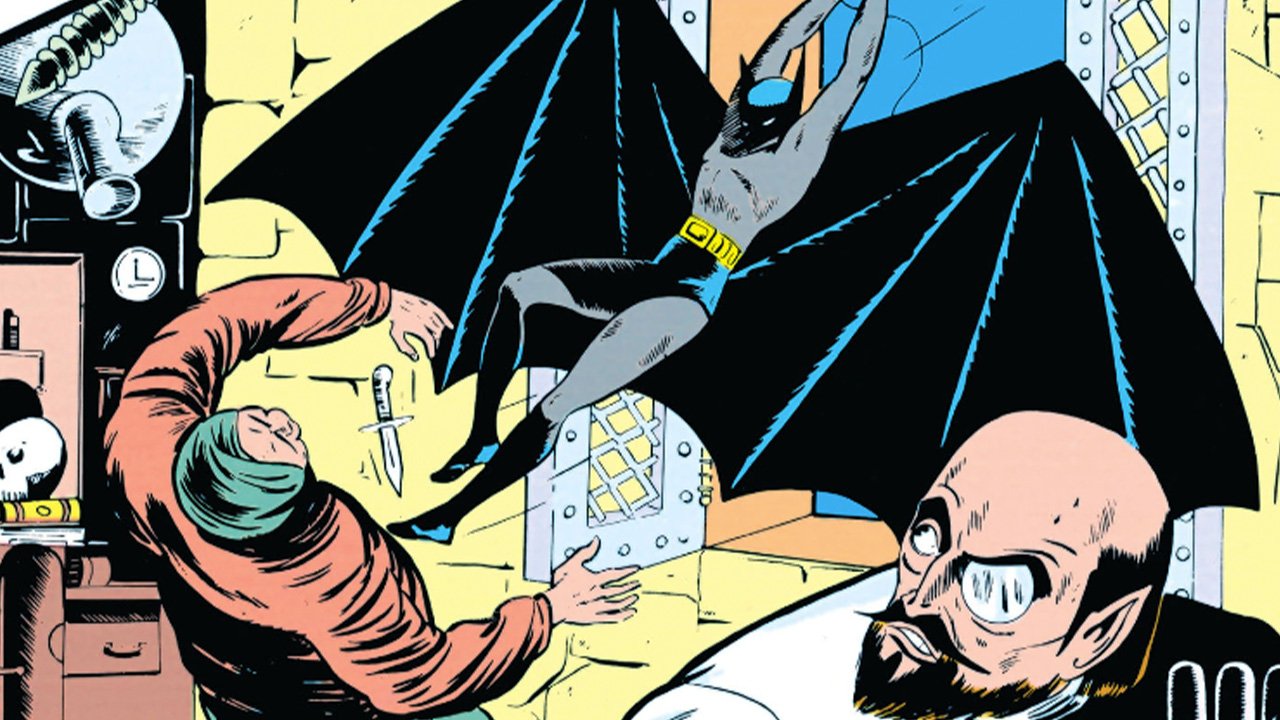 “These days we’re just used to resurrections and replacements but I got to thinking. Who did it first? Who came back first? Either as a resurrection or a replacement.”

The tradition of death and rebirth is, in fact, nearly as old as DC Comics itself. But before it was used to apply to heroes, it was villains who most frequently returned from certain demise. After all, all the greatest heroes are defined by their diverse gallery of rogues. Why go through all the trouble to design a foil for your hero if you’re just never going to use them again?

This was a lesson that Batman creators Bob Kane and Bill Finger learned early in their career. In the third ever Batman story, told in 1939’s Detective Comics #29, Finger and Kane introduce us to Doctor Death: one of the earliest mad scientists in comics, whose modus operandi is the use of deadly chemical agents. At the end of the story, Doctor Death perishes in a chemical fire which consumes his laboratory. “Death…” Batman intones over the blaze, “for Doctor Death!”

But that wasn’t the last we saw of him -- nor would we have to wait long for his return. The very next month, Detective Comics #30 revealed Doctor Death’s miraculous survival, returned from certain death to exact his vengeance on the Dark Knight Detective. And as we know too well, Batman’s greatest villains have been evading the reaper ever since. 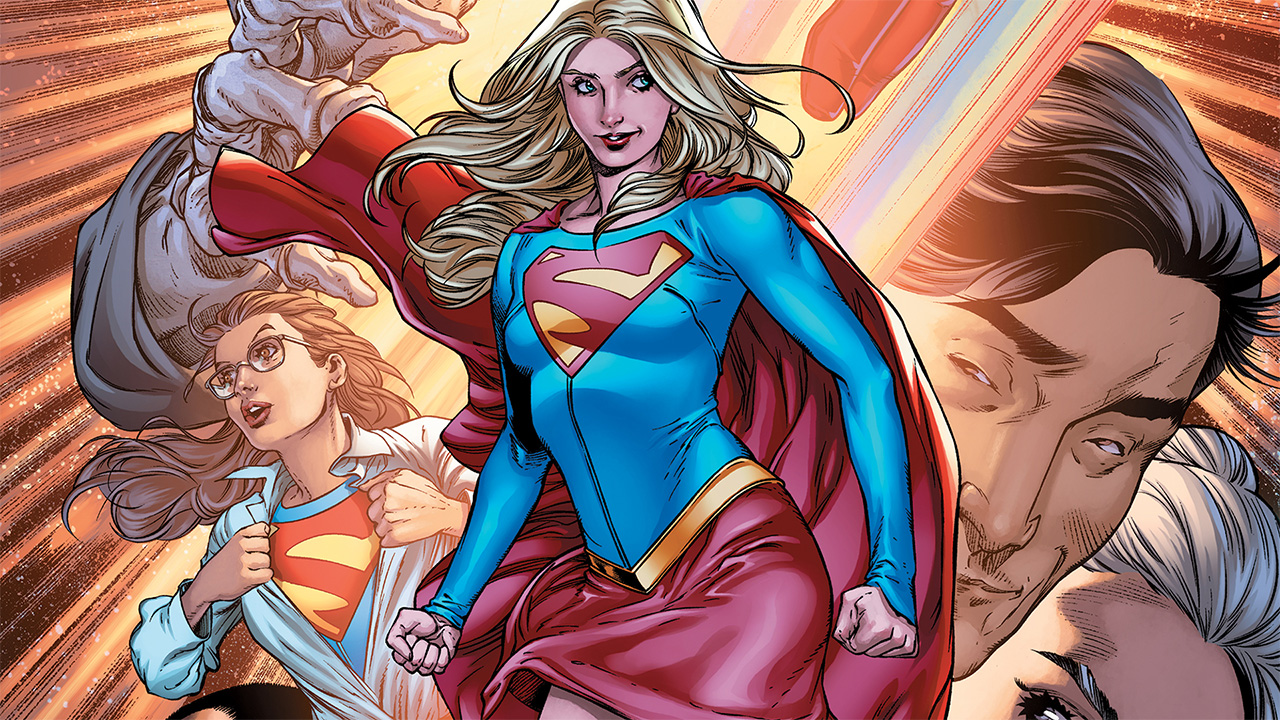 “How does Supergirl cut her hair? Not TV show Supergirl, comic Supergirl. And how come she doesn’t have a mask? Or something to hide her identity? If you knew Kara Danvers and Supergirl it would be pretty easy to figure out her identity.”

Supergirl never explicitly shows us in the comics how exactly she manages her hair, but we can make a pretty good guess of it. In the Pre-Crisis years of continuity, 1967’s Superman #201 explains that under a yellow sun, Superman simply doesn’t have to shave. His hair grows to a certain length, and just stays there. Having the same physiology as Clark, the same must therefore be true of Kara.

In Post-Crisis continuity, the question of how Superman cuts his hair is one of the first mysteries of his physiology that John Byrne resolves -- by showing him cutting his own hair by reflecting his heat vision in the mirror.

After her original death during Crisis on Infinite Earths, the Post-Crisis version of Kara Zor-El we know and love wouldn’t return to comics until 2004’s “The Girl From Krypton.” There, Superman, Batman, and Wonder Woman all play roles in teaching a newly arrived Kara how to adjust to life on Earth under a yellow sun. Presumably, while Clark was teaching Kara everything he knew about how to live on Earth as a Kryptonian, he also showed her how he cut his hair. For the TV version of the character, Supergirl actress Melissa Benoist confirmed this notion in an interview, and there’s no reason it shouldn’t be true in the comics as well.

As for the secret identity: in Pre-Crisis continuity, Supergirl did almost everything Superman did to hide who she was. She used an assumed name, changed her mannerisms, and sometimes even wore a wig. But more modern takes on the character don’t burden her with such precaution. Why? Because while you and I know that Supergirl has a secret identity and lives among humans, most people in the DC Universe have absolutely no reason to assume that Supergirl leads a double life. Like Superman, they just think of her as Supergirl, all the time. Her true identity is “Kara Zor-El,” as far as the people of Metropolis or Midvale or National City are concerned. Why assume that pretty blonde girl in your high school class is anyone other than the appears to be? We’ve all known someone who kind of looks like a celebrity. The most it warrants is typically a double take.

Of course, that’s all moot now. Now that Superman’s come clean about his own secret identity in Brian Michael Bendis’s current run on the character, Kara’s too has gone by the wayside. (Don’t worry -- he asked her first before he did it.) 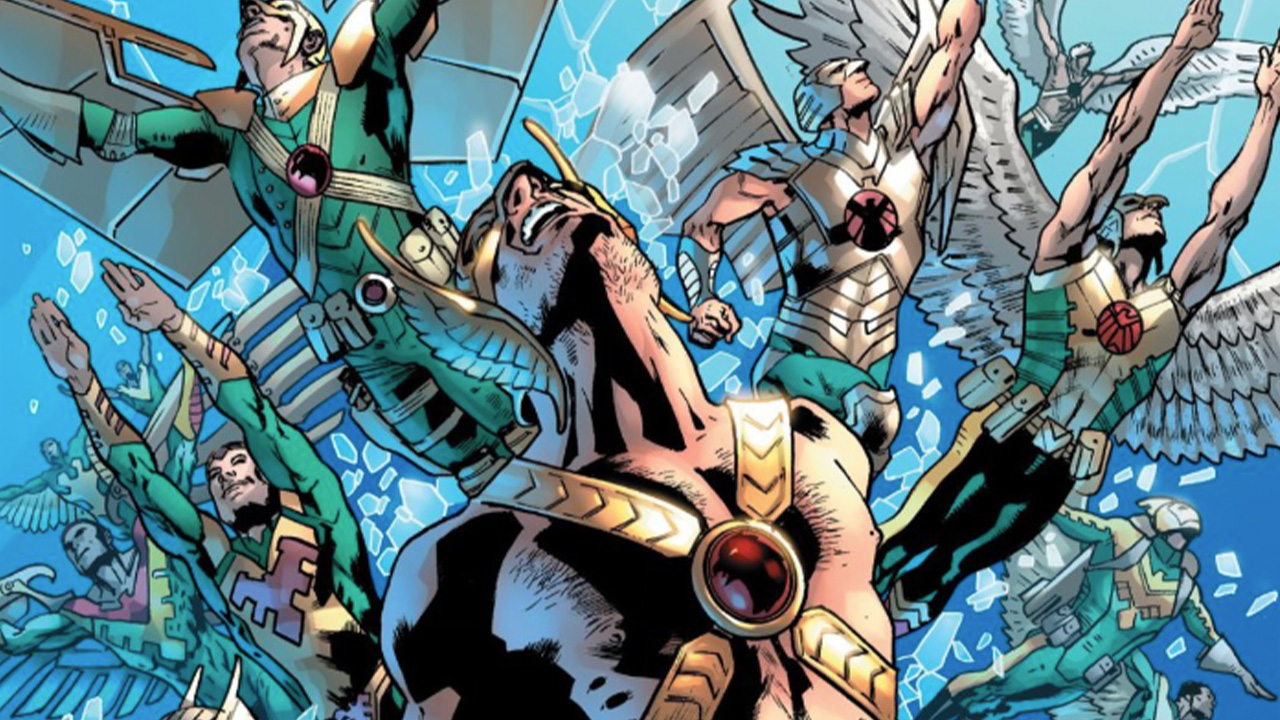 “Okay, this one might be a little mean, but I’m going to ask it anyway: How many times have the Hawks been reincarnated? (Or, if not that, at least how many different lives we can identify?)”

Before Geoff Johns took over Hawkman duties in 2002, there was little we knew about Hawkman’s reincarnations. And what we did know was notoriously contradictory. The classic Golden Age explanation of Hawkman portrayed Carter Hall as the reincarnation of Prince Khufu, an Egyptian pharaoh. In the Silver Age, where many magical and mystic heroes were being redefined along the lines of science fiction, Hawkman was reimagined as “Katar Hol,” a policeman from the planet Thanagar. The “Zero Hour” event attempted to forge these two disparate takes on Hawkman into a single being, but it was generally deemed even more confusing.

The new take on Hawkman which lays heavily into the themes of reincarnation can be attributed to two writers: first, the aforementioned Geoff Johns, and second, the Hawkman work currently being written by Robert Venditti. While Geoff builds on the Golden Age Prince Khufu theme by introducing us to a whole line of Hawkmen in between ancient Egypt and the modern era, it was Venditti who finally solved the problem of Hawkman’s dual mystic and cosmic origins: Hawkman, he revealed, was not only reincarnating through time, but through space. Katar Hol, Prince Khufu, Carter Hall -- they were all one and the same, a continuous chain of lives across many millennia and countless planets.

I’ll say this up front: we do not have an exact count of how many lives Hawkman had lived, and we likely never will. By keeping the number open, future Hawkman writers are free to introduce new incarnations of the character through time and space in perpetuity. Not only that, but as the latest Hawkman story arc has revealed, Hawkman’s reincarnations not only occur throughout space, but through all realities. So, for instance, the Hawkman of Earth-One and the Sky Tyrant of Earth-Three are the same person, at different points of their own personal, nonlinear timeline. So, functionally, the answer to this question is: infinity.

But, you also asked how many incarnations of Hawkman we can identify. So let’s try and do that.

(I’ll also say that we know more at this point about Hawkman’s lives than Hawkgirl’s, but we can assume that the count is more or less the same, considering the emergence of Kendra Saunders while Carter still pined for Shiera Hall in 1999’s JSA series was regarded by Carter as something of a rarity. So for simplicity’s (ha) sake, let’s count the lives we know of Hawkman and assume the lives of Hawkgirl fall somewhere within those bounds.)

First, we’ve got the Pre-Johns Hawkmen: Khufu, Katar Hol, and Carter Hall. We won’t count the Hawk-God entity of Zero Hour, since that was kind of its own thing separate from the reincarnation cycle. That’s three.

The lives we get to know in Johns’ run include:

* Silent Knight, a medieval hero who dates back to The Brave and the Bold #1.

* A man in the 15th century Japanese Ashikaga shogunate.

* An 18th century African-American slave in the southern United States.

* James Wright, a Pinkerton detective in the early 20th century.

So, that’s 8 more we can identify, bringing us up to 11. (However, these cycle patterns seem to indicate that Hawkman was meant to reincarnate roughly once per century. According to Johns’ run, Prince Khufu was alive during the reign of the pharaoh Rameses II, placing that life in the 13th century, BC. That would therefore imply the existence of… let’s see… 24 more additional lives. So we could bring the count up to 32 right now if we really wanted, but let’s not be presumptuous.)

After Geoff Johns’ run came The New 52, and Tony S. Daniel’s The Savage Hawkman. Daniel’s Hawkman take is much more focused on the Thanagarian Katar Hol origin than the reincarnation aspect, so we don’t need to examine it for this experiment. Dark Nights: Metal  then introduces us to The World Forger, an incarnation of Hawkman incarnated backward through time to the dawn of creation in service to the Bat-God Barbatos. (12.)

That brings us to Hawkman’s next series, in the Rebirth era -- the time, space and reality encompassing series still ongoing by Robert Venditti, which introduces new Hawk incarnations with breakneck speed and no signs of slowing.

* Ktar Deathbringer, the ORIGINAL Hawkman (from his own personal timeline).

* Golden Hawk, hero of a planet destroyed by the Deathbringers.

* Avion, a legendary hero of the subatomic Microverse, protected in the current day by Ray Palmer.

* Airwing, a god of New Genesis.

* Titan Hawk, hero of a world of giants.

That brings us to 22 lives of Hawkman. But that isn’t close to the total count by a long shot. In Hawkman #13 alone, for instance, we see our time-trapped hero reincarnate a dozen times over the same centuries-long war across both sides of the battle lines on the planet Nebulen. So now that’s 34. And across Earth, cultures of every stripe are shown to have their own Hawkman legends from across the generations. Not only can Hawkman live his lives across worlds and realities, but he can even exist as separate entities at the same point in time simultaneously -- after all, Hawkman’s reincarnations are only linear from his own perspective. Where and when he reincarnates throughout time is not necessarily monodirectional.

So how many Hawkman incarnations have there been? The vastness of the Metaverse is limited only by our collective imagination, and each world we conjure contains a rich lineage of Hawkmen. If you can dream a life of Hawkman, then somewhere, that Hawkman exists.

...But if what you dream about is Questions, then what you need to do is bring them to me. I’ll be back every week in this column to resolve your issues no matter how many lives it takes. All that’s required is to ASK… THE QUESTION.