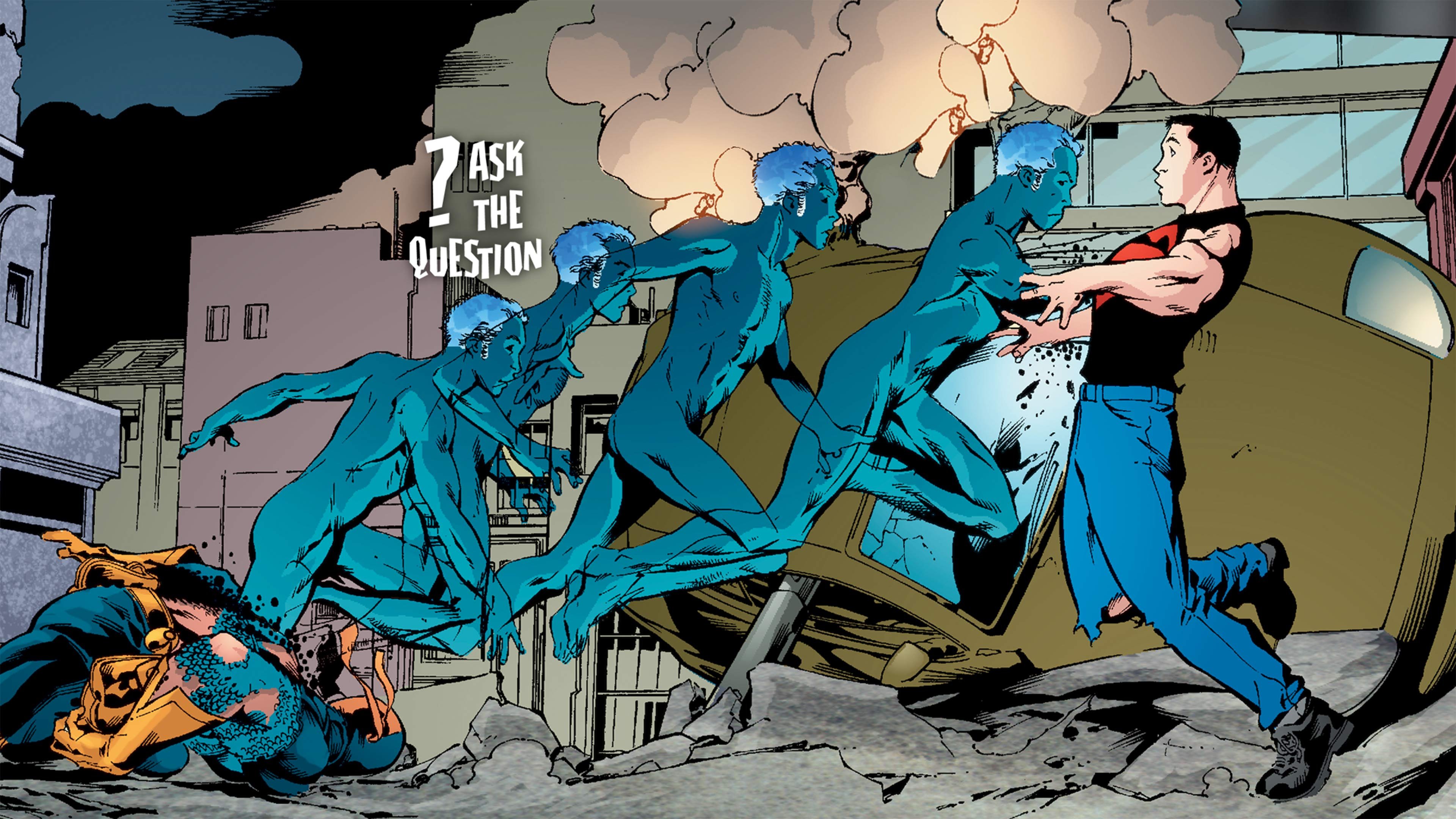 Hello. I’m Alex Jaffe, better known in our Community as HubCityQuestion. My personal mission: to take on any question you have about the DC Universe -- no matter how granular, obscure, or strange -- and present you with an answer. As a faithful steward of the truth, I’m here each week to address these inquiries. If you’d like to submit one of your own, you can stop by my office at any time in our lively Community to state your case, which I will address in turn to the best of my ability. All YOU need to do is ask… The Question. 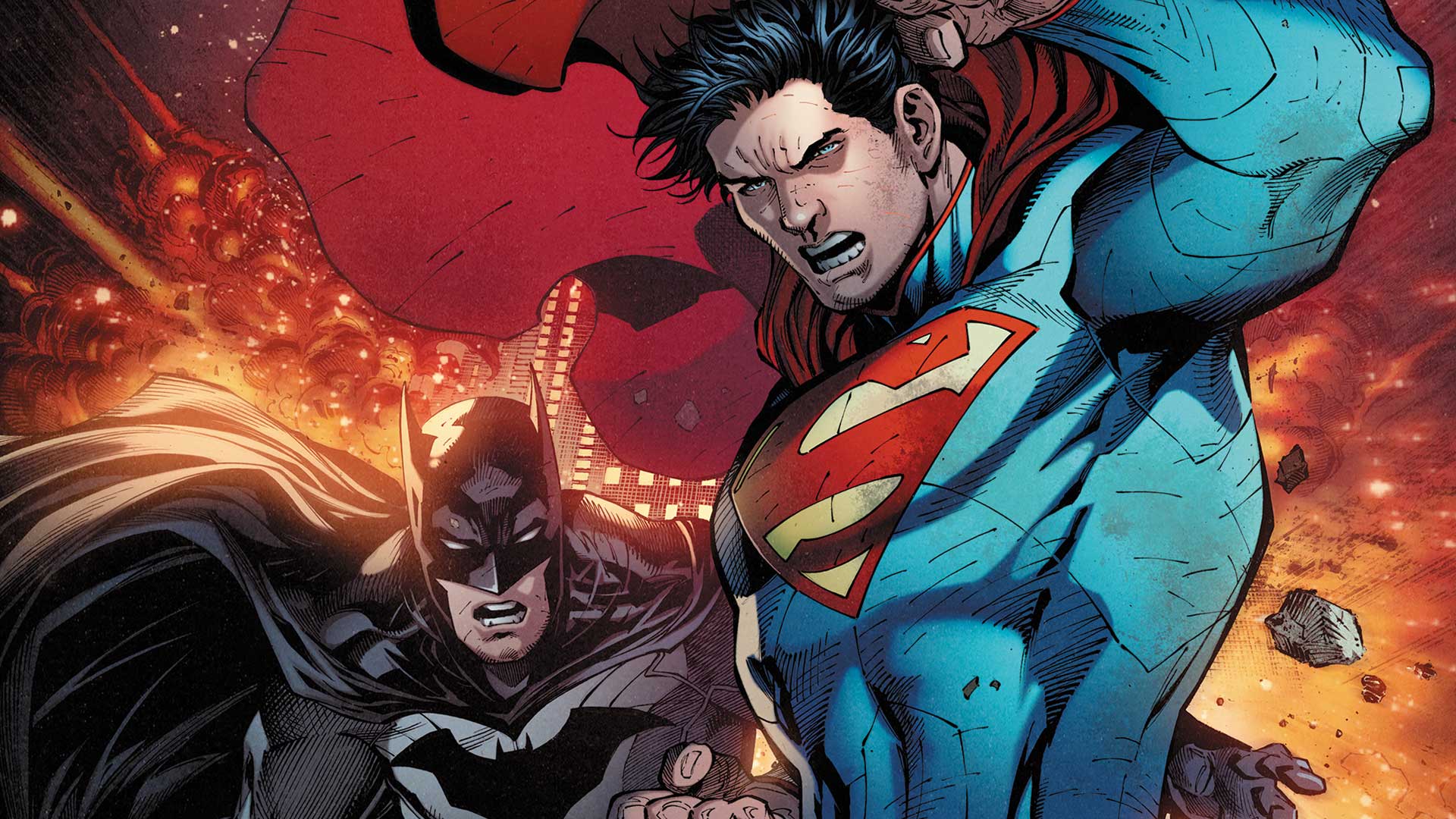 Before we get into this, let’s define the stipulations of the question. What is a “main” Superman or Batman book? I believe the spirit of this question suggests one which meets the following requirements: a book launched with the intention of being an ongoing, unlimited series, and a book which (at least for the overwhelming majority of its run) primarily focuses on the title hero. Scott Snyder may have written Superman Unchained during his New 52 Batman run, for instance, but because Superman Unchained is a limited series, he wouldn’t qualify for that intersection.

A “main” writer, on the other hand, may be defined as one who takes over one of these comics for a significant run, as opposed to a fill-in or guest writer. So for instance, Brian Michael Bendis may have done a guest spot in Detective Comics #1000 while writing Superman, but because he wasn’t the main writer of Detective Comics, he wouldn’t qualify either.

Where you establish the cut-off for “significance,” however, is a matter of opinion. Surely a one-shot appearance wouldn’t qualify one as a “main” writer. But what about a two or even three parter? Or even just a single story arc? Is there a difference if it’s between stints from the prior main writer, or if a new writer comes aboard afterward? What if they’re one of several rotating writers during a period of publication, as was quite common during the Pre-Crisis era?

For this experiment, let us say that to be considered a “main” writer, they must have written at least six issues over a twelve month period. These issues may be in any qualifying “main title” — for instance, Jerry Siegel’s accumulative run on the main Superman books would account for his work on both Superman and Action Comics.

I’m gonna level with you, Tornado: this is the most work I have ever put into a case for this column. I toiled at this for hours beyond counting, where all but the most bullheaded detectives would have thrown up their hands at the sheer magnitude of this challenge. But your faithful faceless investigator pressed ever onward, tirelessly matching up runs by every writer on every title to meet these qualifications over the past 80 years. From Jerry Siegel to Brian Michael Bendis; from Bill Finger to Tom King. In the process, I learned secrets about DC history I never even thought to look for, and perhaps even a few important things about myself.

In the end, though, after scouring thousands of issues and hundreds of names, I have compiled, for what I believe to be the first time anywhere, a list of the proud few writers who worked regularly on a flagship Batman and Superman title at the same time.

The first person to achieve this feat is perhaps the hardest working writer in the Golden Age of DC, Bill Finger. The co-creator of Batman himself put a great deal of work into the Super-Books of the 1940s, frequently pitching in when Jerry Siegel was unavailable. Though he never had a long consecutive run, Finger wrote over 50 issues of Superman and Action Comics during his record long runs on Batman and Detective Comics.

In the waning years of World War II, Alvin Schwartz was one of the main writers on Batman, Superman, Detective Comics, and Action Comics. He later went on to co-create Bizarro in 1958 — depending on who you ask, that is. It’s a long story. At any rate, he was the first to do the whole “opposite talk” deal.

The Golden Age of rotating creative teams was also the heyday of bullpen writer Don Cameron, who bounced between all four Batman and Superman books between 1943 and 1948. And he was no slouch: this era of productivity brought us Toyman, Alfred Pennyworth, and the very beginnings of what would become the Batcave.

A pulp science fiction novelist walking in the footsteps of HP Lovecraft and Robert E. Howard, Edmond Hamilton paid the bills by picking up work on Action, Detective, Batman and Superman — lots of work. Between 1948 and 1957, Hamilton often found himself working on all four books at once. But his flair for the futuristic was best deployed during his early work on the Legion of Super-Heroes, dreaming up such mainstays as Timber Wolf and the Time Trapper.

In the 1970s, it was hard to find a DC title that wasn’t being written by the great Dennis O’Neil. From 1971-1972, he was the main writer on Batman, Superman, and Detective Comics — and his best work was still yet to come.

Between 1975-1980, “The Answer Man” Bob Rozakis wrote quite frequently on both Action and Detective Comics. His was a work ethic which continued to inspire me as I collated all of this information together.

Swamp Thing co-creator Len Wein also achieved this distinction between 1979 and 1980 with dual runs on Batman and Superman. Oh, and just for good measure, he happened to be handling The Flash and Justice League of America at the time, too. Len liked to keep busy, and we’re all the richer for it.

It should come as no surprise that Marv Wolfman, one of the primary architects of Crisis on Infinite Earths, also managed to achieve this distinction, with runs on Batman and Action Comics between 1980 and 1981.

Greg Rucka gets an honorable mention for writing both Detective Comics and Action Comics in 2010… with the caveat that at the time, neither title featured Batman or Superman.

But the most recent writer to pull off this rare feat? That would be Grant Morrison, who worked on both Action Comics and Batman, Incorporated in the dawning years of The New 52. Sticklers may not consider Batman Incorporated to be a “main” Batman book, but it certainly had an impact which rippled out to every Batman title being published at the time.

Okay, that whole endeavor took a lot out of your old pal HCQ, so we’re going to keep these next answers short — but informative. 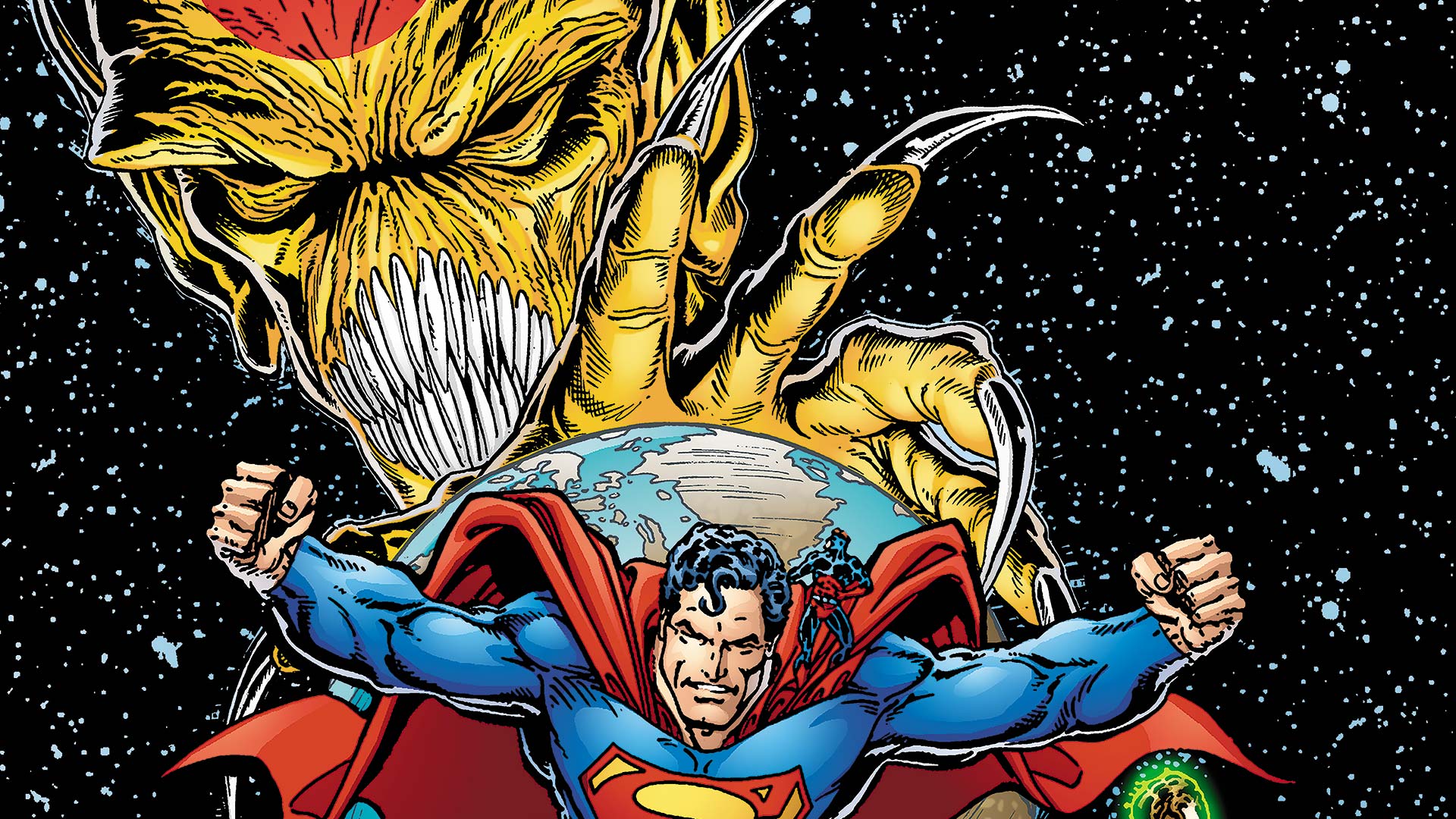 “When was the term ‘Meta’ first used in a comic and who was it referring to? Who is considered the first ‘meta’ in DC history? What brought about the creation of “metas” from the writer’s perspective, and who was the writer?”

Well, technically, the term “Meta” was first used in DC continuity to mean something else entirely: it was the name of the homeworld of Shade The Changing Man, the titular hero of Steve Ditko’s 1977 comic series.

But let’s get serious: you mean “meta” as in “metahuman.” That particular concept was first floated in the 1989 Invasion! crossover, written by Keith Giffen and Bill Mantlo. Even if you’ve never read this series, you may still be familiar with it: a great deal of its premise was used as the basis for Season 2 of Young Justice. In fiction, it was first used by a conquering alien race known as The Dominators, who came to Earth seeking to exploit those with the metahuman gene in order to further expand the might and scope of their empire.

The metagene, in summary, is a dormant aptitude in some humans which, when triggered by a traumatic event, allows these humans to gain superpowers, instead of what happens to most people when they’re struck by lightning or fall into a vat of caustic chemicals.

The origins of the metagene and how it manifested in early humans are explored in Grant Morrison’s first JLA story arc. Basically, you can blame White Martians for experimenting on early humans for the metagene behaving the way it does. The first metahuman that we know by name may very well be Vandal Savage, as Young Justice posits — although another individual, Immortal Man, had his own powers triggered by the same event which endowed Savage.

From the writer’s perspective, the “meta” concept may just be a matter of convenience. A unified theory to explain why and how all these different Super Heroes are able to coexist, beyond mere coincidence. It also makes for one hell of an inciting premise for an alien invasion. 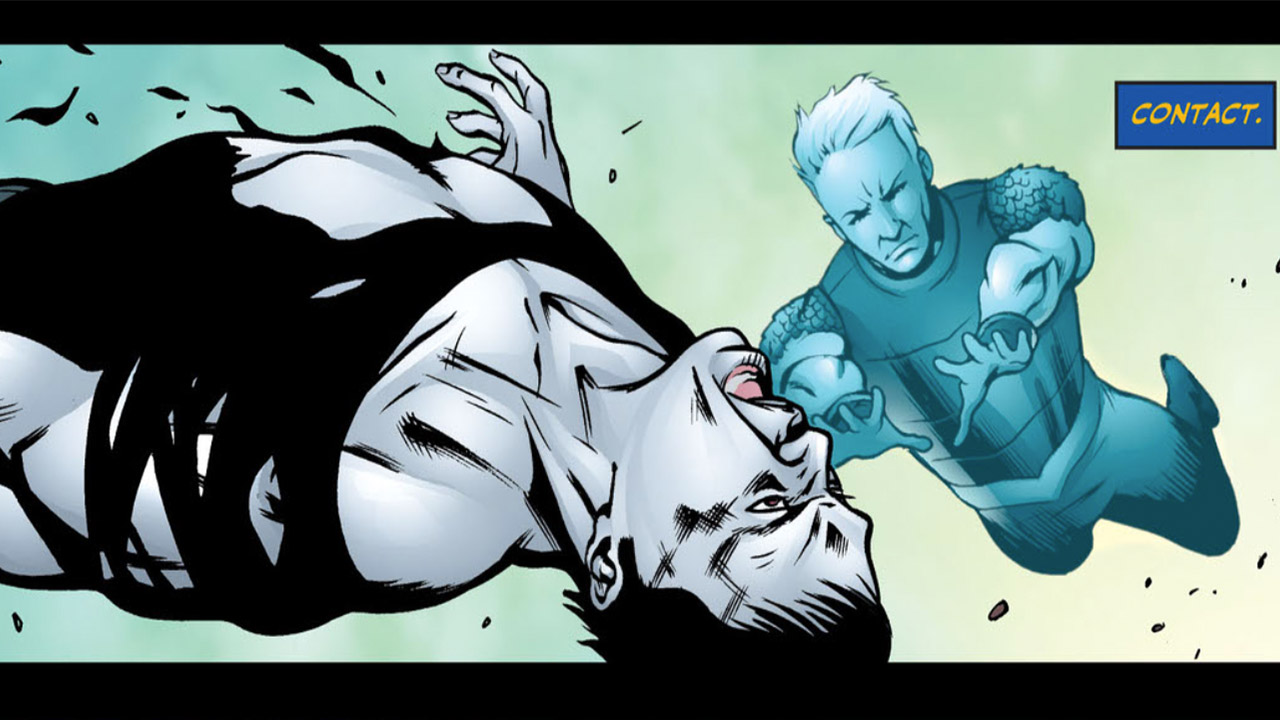 “Question! Does Jericho have access to one’s consciousness and memories when he takes over and possesses someone?”

Are you asking if Jericho can read the mind of whoever’s body he’s inhabiting? The answer, thankfully, is no — or we’d be in a whole lot more trouble during his sporadic turns into Super-Villainy. It’s a bodily takeover only when Jericho makes “contact.” Although if his target has superpowers, those he can access.

But to access my knowledge, you don’t have to be the son of Deathstroke! All you have to do is stop by my office, and I’ll be back at this time every week to address your concerns, no matter how exhaustive they may be. You need only ASK… THE QUESTION.