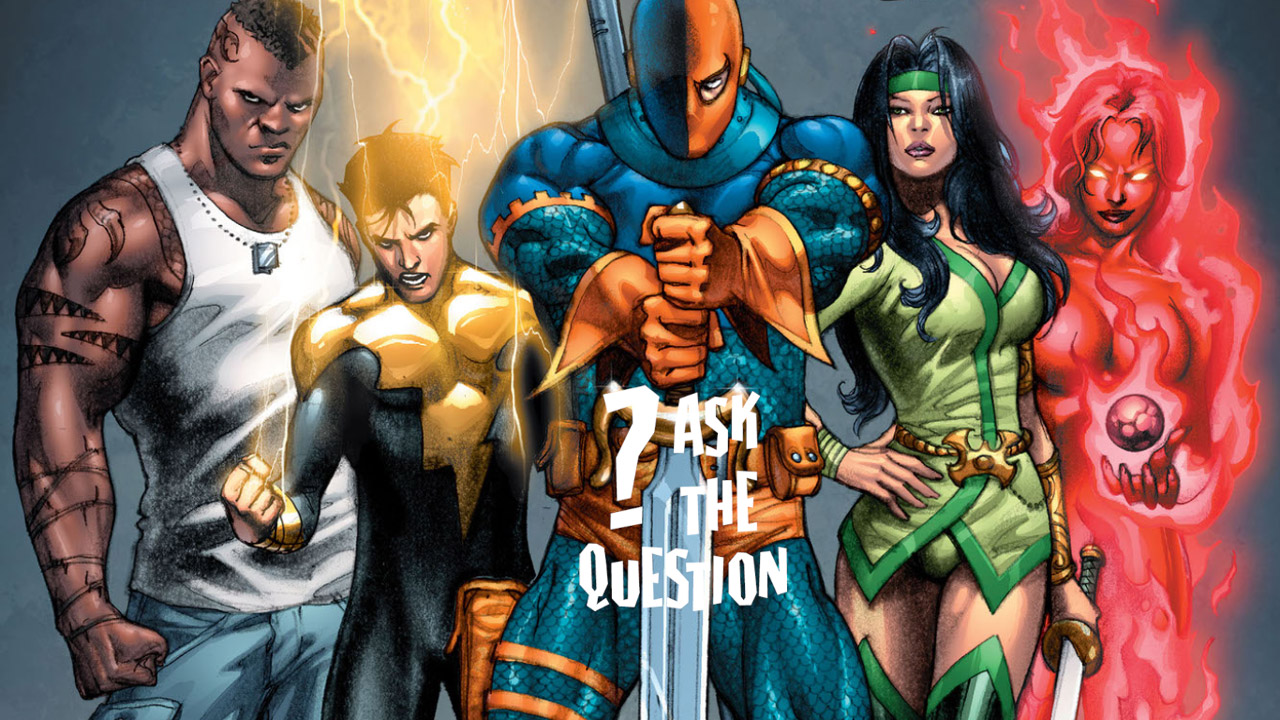 Ask...The Question: Have DC's Greatest Mercenaries Ever Teamed Up?

FORTUNE FAVORS THE BRAVE AND THE BOLD 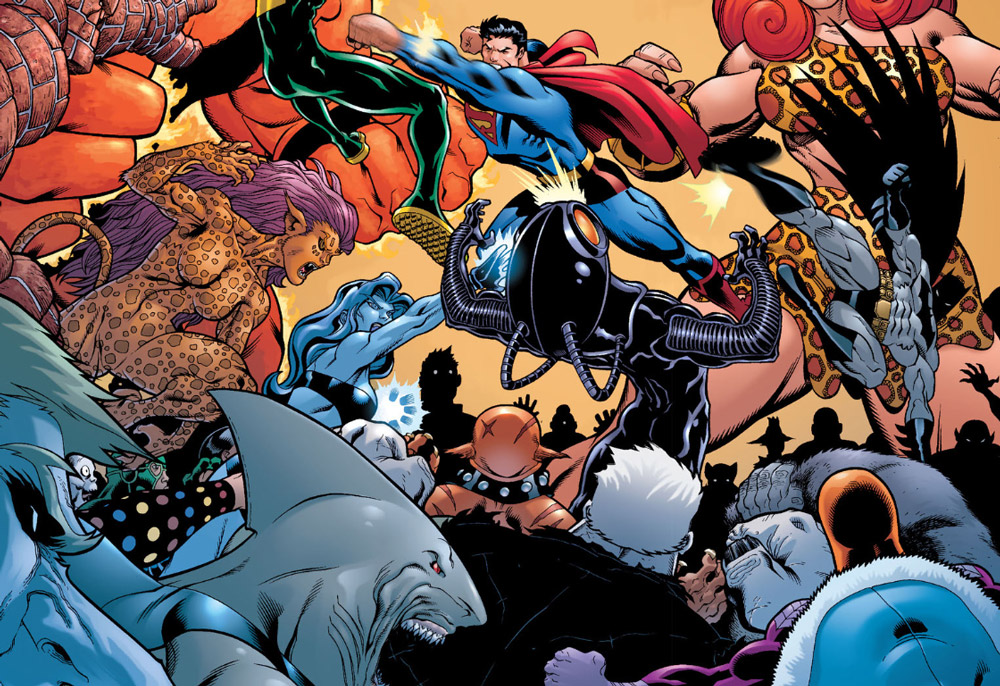 “DC has a lot of well-skilled mercenaries. (Two off the top of my head are Deathstroke and Lobo.) Have any two bounty hunters ever teamed up to pursue a single target/team? Or have they ever made a deal with each other to pursue each other’s targets? (e.g. Wile E. Coyote/Lobo crossover)” -ReepDaggle

I don’t believe any of DC’s greatest mercenaries have done a Strangers on a Train-style deal to switch targets. Even in the example you provided, I wouldn’t exactly call Wile E. Coyote a bounty hunter, but more like Lobo’s client. The closest thing I can think of is the Batman: The Brave and the Bold  episode “Triumvirate of Terror!”, where Luthor, Joker, and Cheetah all switch their respective dance partners--but none of those three could rightfully be called a mercenary, either. Mercenaries are a proud bunch, and aren’t too keen on giving up a payday even if it means taking another in return.

But team-ups? Those happen all the time. On three separate occasions, Deathstroke formed his own twisted counterparts to the Teen Titans to pursue contracts on a larger scale. One of those incarnations notably included Cheshire, the DC Universe’s master of poisons. Of course, I’d be remiss not to mention the very idea of the Suicide Squad (and to another extent the Secret Six), which is to unite (sometimes mercenary) villains against a common target. The “New Suicide Squad” of 2014 even had Deathstroke and Deadshot working together on the same roster. 2017’s “War of Jokes and Riddles” has Joker and Riddler alike open their coffers to employ half of Gotham’s villains each in their proxy battle. Most recently, in the 2020 “Dark Designs” story arc in BATMAN, Deathstroke, Cheshire, Merlyn, and a couple of newbies are hired to take out the same targets across Gotham at the behest of their benefactor, The Designer.

There are also the cases of bounties too large for any dedicated mercenary to ignore, which often leads to team-ups. The most notable case of this may be the story behind the video game Batman: Arkham Origins, where Black Mask places a bounty on Batman’s head so large that Bane, Deathstroke, Deadshot, Lady Shiva, Copperhead, Electrocutioner, Killer Croc, and Firefly all come calling. In the first story arc of 2016’s ALL-STAR BATMAN, nearly every mercenary you can imagine converges on a bounty placed on Two-Face by- who else?- Two-Face. In 2003’s SUPERMAN/BATMAN #3, an enormous collection of villains, including Lady Shiva, work together to collect a bounty on Batman and Superman placed by President Lex Luthor… though, as the duo discovers, all of them are being controlled by Gorilla Grodd. Turns out that whether you’re Batman himself or just want Batman dead, the world’s greatest superpower really is money. 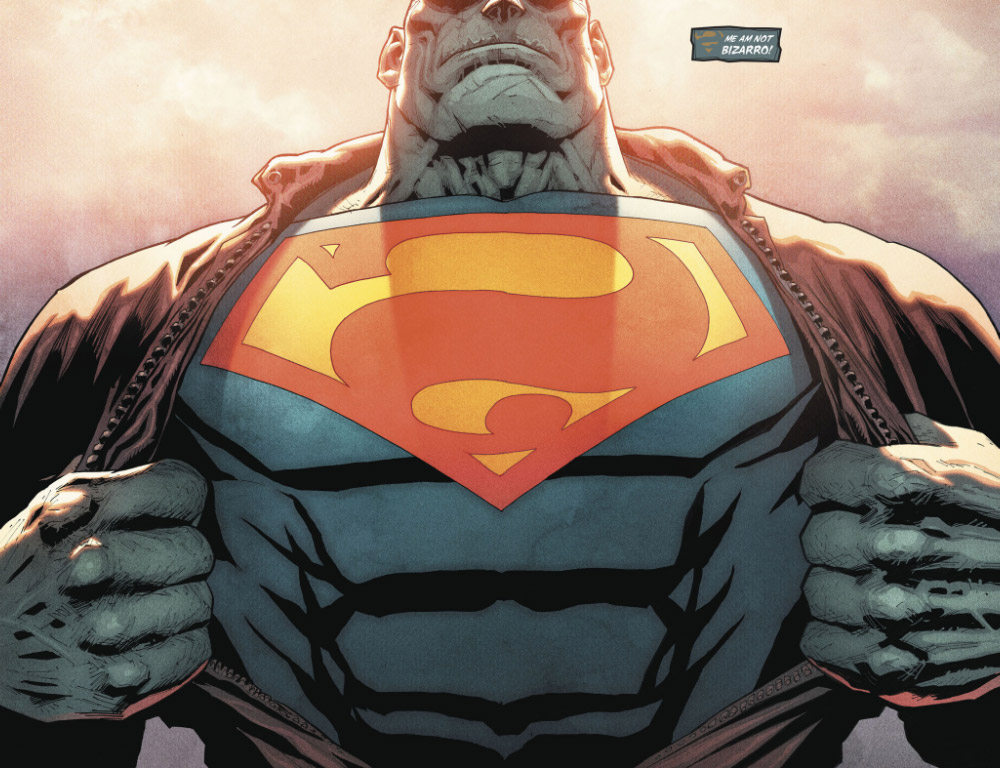 “Are there currently two Bizarros in the DC Universe? There is the one with the Outlaws, and then another that seems to come from another world. Are they separate? If not do they know the other exists?” -ScarlettSpeedFan23

The short answer to this question is yes, there are two significant  Bizarros in the recent history of the DC Universe. The pedantic answer is that technically, there is an infinite number of Bizarros in the DC Universe, just as there are of any other character. You see, the reason we have one Bizarro in RED HOOD AND THE OUTLAWS and another from Bizarro World who shows up in 2016’s SUPERMAN is, well… the same reason there’s one Superman who landed in Kansas, and another who landed in Ukraine.

In the continuity established by The New 52 and onward, Bizarro of OUTLAWS is the second Bizarro created by Lex Luthor in a misguided attempt to clone Superman, the first having been introduced and then killed in 2013’s FOREVER EVIL.The other Bizarro, who hails from Bizarro World, isn’t merely from another planet, but from another universe.

In the original Pre-Crisis continuity, the Bizarro World, or “Htrae,” was a planet in the same universe as Superman’s Earth, created by the “Duplicator Ray” which was responsible for the creation of Bizarro himself. But in addition to its cues from 2015’s SUPERMAN: LOIS & CLARK, Peter Tomasi’s SUPERMAN series takes just as much inspiration from Grant Morrison’s THE MULTIVERSITY, taking the opportunity to explore the nature of the multiverse as established in that series for the modern era. As established in THE MULTIVERSITY GUIDEBOOK, The Bizarro and Bizarro World seen in this series is a counterpart from Earth 29, a Bizarro Universe which runs counter to the Prime Universe of Earth 0. Like most multiverse counterparts, these two different Bizarros have never encountered each other. But after Tomasi’s SUPERMAN, the Earth 29 Bizarro went on to appear in THE TERRIFICS. 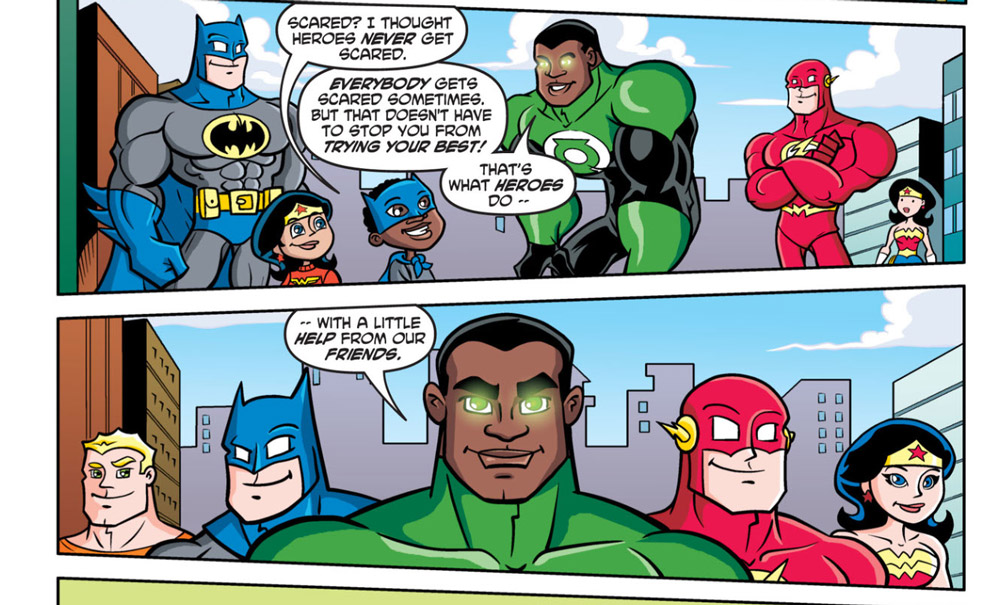 “What happens when Green Lantern meets Scarecrow’s fear toxin? Does GL just overcome great fear and shrug it off, or does it neutralize him/her?” -MatthewHecht

In concept, the power of will versus the master of fear promises an epic psychological battle. But in practice, it usually shakes out to a contest between one of the most powerful cosmic forces in the universe versus one freaky little burlap aficionado’s science experiments. I was able to find four different occasions where a Green Lantern is inconvenienced by Scarecrow’s machinations, and in three of those incidents, the Green Lantern in question is able to pull themselves out of the artificially induced terror using their innate will. After all, Green Lanterns are chosen specifically for their ability to overcome great fear.

In 2000’s GREEN LANTERN/ATOM, Green Lightning, an imaginary “Teen Lantern” brought to life by Kyle Rayner in the “Circle of Fire” storyline, manages to overcome a trap by Scarecrow when Ray Palmer fetches Kyle’s ring for him to dispel the fear-based illusions. 2017’s GREEN LANTERNS #17 sees Scarecrow upgrade from fear gas to channeling the power of fear from the emotional spectrum, which Simon Baz manages to overcome through his own mental fortitude. Perhaps most famously, in the 2012 animated movie Justice League: Doom, Hal Jordan shakes off the effects of Scarecrow’s fear toxin of his own accord… at least after Batman informs him that he’s experiencing an illusion. The only time a Green Lantern hasn’t been able to beat Scarecrow’s effects on his own, in fact, was in 2008’s DC SUPER FRIENDS #8, a kid friendly comic book tie-in series to a Mattel toy line from the late ‘00s. In this special Halloween issue, John Stewart is dosed with a fear gas canister hidden in a key to the city he’s awarded, causing him to see everyone around him as monsters. Only the power of Wonder Woman’s Lasso of Truth manages to dispel the chemical deceit. After all, the theme of DC SUPER FRIENDS is that working together can accomplish what even the greatest of us may not be able to achieve alone. 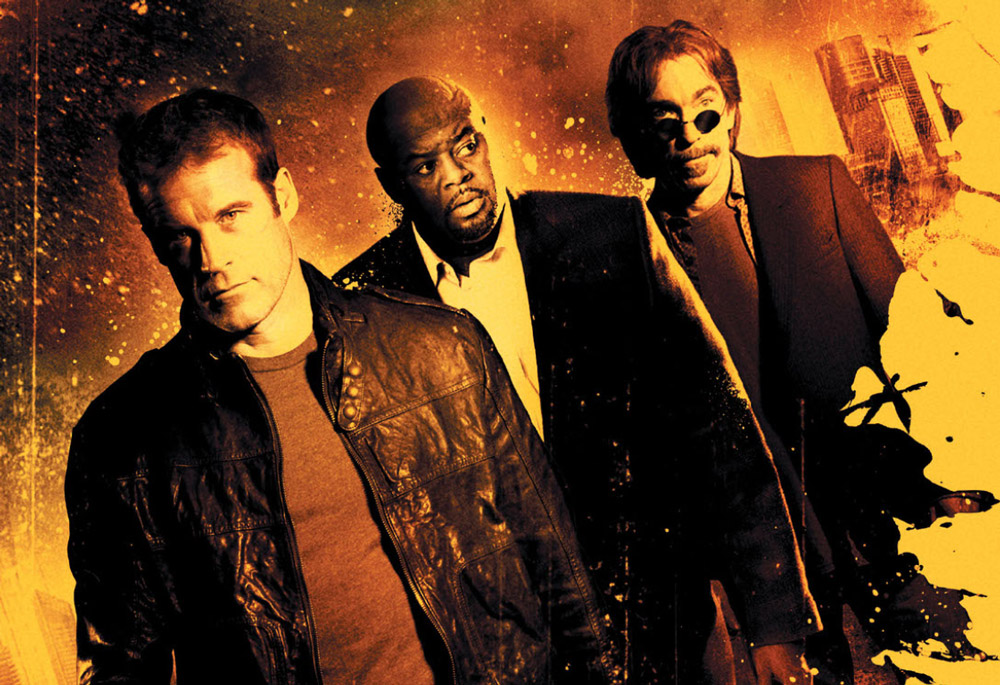 So, as part of my subscription benefits to DC Universe, I’ve been enjoying the Human Target series once again. Mark Valley is certainly convincing enough as Chris Chance. And while he’s smooth enough, he lacks that “out of the dark” cool of Robert Loggia’s T.H.E. Cat. His savoir-faire on the show does serve him well, however. A more down to earth version than its predecessor some years earlier with former rock idol Rick Springfield. It still holds up, in my opinion. It could easily run today on the CW, as more than the back-up character we last saw on Arrow. All of which prompts my question, Q. Where is Mr. Chance and company these days within the DCU? -Wrightline1.42741

You know, I really like that first season of Human Target  myself. A fresh-off Pushing Daisies Chi McBride, Jackie Earle Haley’s best role in a DC project, and of course that Bear “Battlestar Galactica” McCreary soundtrack all bring refreshing color to Christopher Chance’s world. But as for this master of disguise and personal bodyguard’s place in the DC Universe, well… apart from his aforementioned appearances on Arrow, the Human Target hasn’t really participated in the larger DC Universe in almost 40 years. Sure, he had his own special in 1991, but that was purely to promote the Rick Springfield series. And in 2010, there was a pretty entertaining HUMAN TARGET limited series written by Len Wein, but it’s firmly ensconced within the world of the Mark Valley incarnation. Christopher Chance spent the intervening 19 years as a Vertigo character, joining such DC expats as Animal Man, Doom Patrol, and Shade the Changing Man as a former scion of the superhero universe expunged into his own continuity. The Human Target’s last story placing him in the context of the DC Universe was 1982’s BATMAN #352, where he’s employed by Bruce Wayne to impersonate him while Batman goes off to battle the nefarious… Colonel Blimp, a blimp-themed super-villain. Yeah, I don’t blame Chance for getting out of the costumed hero world either.

That’s all the time we have this week, but I’ll be back fresh in 7 days’ time for another 2-5 doses of truth and revelation in this world where so much is all too uncertain. But one thing you can be sure of is that you may always ASK… THE QUESTION.