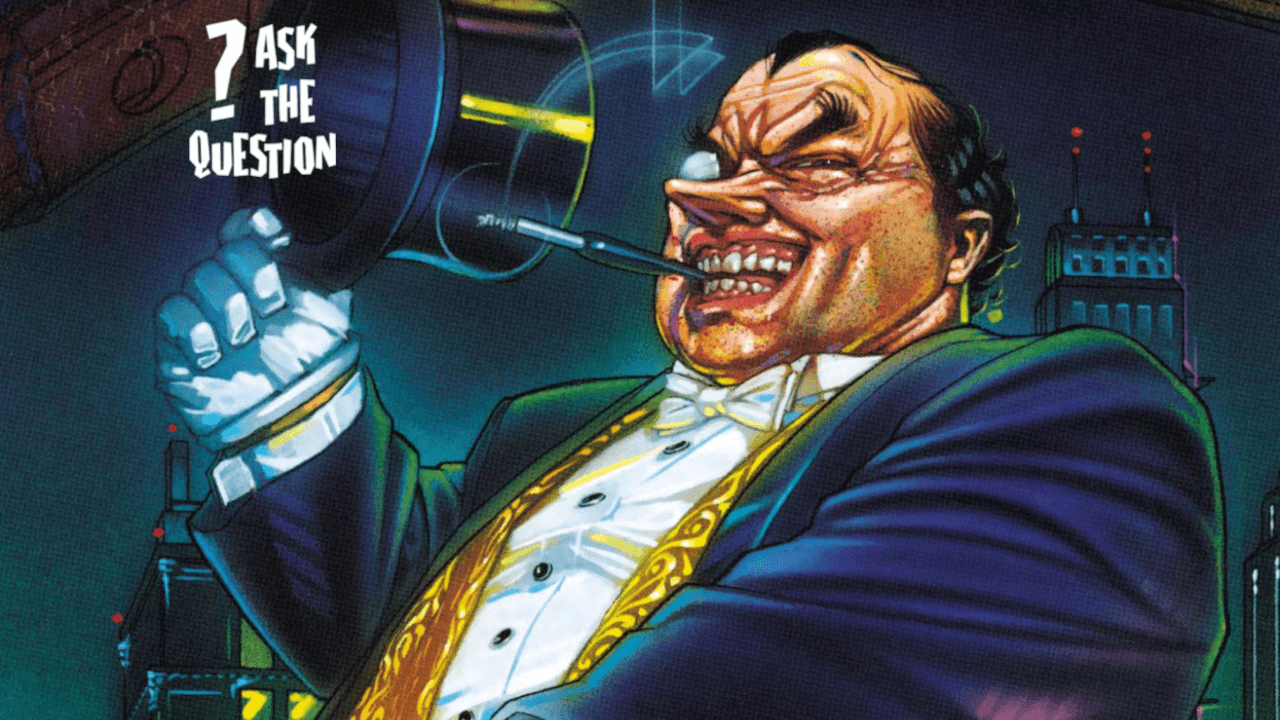 Ask...The Question: Has the Penguin Ever Run for Mayor of Gotham City?

Hello. I’m Alex Jaffe, better known in our Community as HubCityQuestion. My personal mission: to take on any question you have about the DC Universe -- no matter how strange, granular, or obscure -- and present you with an answer. As a faithful steward of the truth, I offer my time in this weekly column to address these inquiries. If you’d like to submit one of your own, you can stop by my office at any time in our Community to state your case, each of which I will in time address to the best of my ability. And so, for the seventy-first time, we venture forth into discovery! 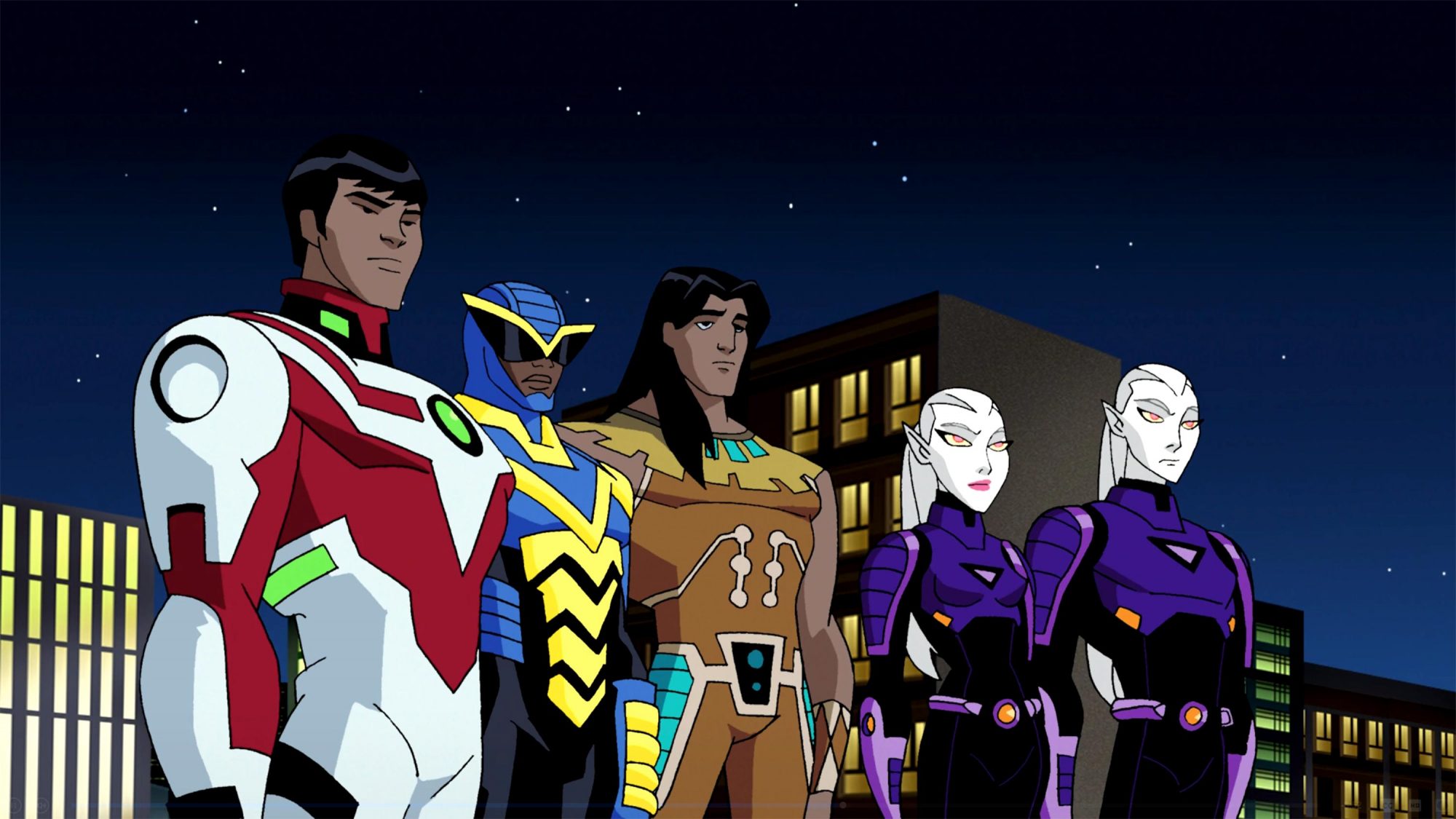 “How many characters were altered in Justice League and JLU (like Devil Ray being a substitute for Black Manta) and how many were newly created for the show?” -Reload

Continuing from last week, let us resume our quest to parse every original and stand-in character from these chapters in Bruce Timm and Paul Dini’s animated universe.

”For the Man Who Has Everything”

Stand-In: Loana, Superman’s Black Mercy generated Kryptonian wife--an amalgam of Lois Lane, Lana Lang, and his imaginary wife from the SUPERMAN ANNUAL #11 story on which the episode is based, Lyla Ler-Rol.

Original Characters: Scientist Gilbert Halstrom, and reporters Jerry and Lasser -- though Jerry appears to be based on the protagonist of the cult ‘70s TV series, Kolchak: The Night Stalker. This episode also features General Hardcastle, an original character who debuted in Superman: The Animated Series.

Original Character: May, a little girl who gets lost at Funseyland.

Original Character: Mike, a newscaster who has Maxwell Lord on the show.

Stand-Ins: The Cadmus-created members of Ultimatum are all stand-ins for original counterparts in Super Friends. “Wind Dragon” stands in for Samurai, “Juice” for Black Vulcan, “Downpour” and “Shifter” for the Wonder Twins, and “Longshadow” for Apache Chief -- a reference which would manifest once more in Young Justice, years later.

“The Once and Future Thing”

Original Characters: Enid Clinton, suffering wife of Chronos. Also features some original characters from Batman Beyond, such as the future Justice League Unlimited, the Jokerz, and Terry McGinnis himself.

“The Cat and the Canary”

Original Characters: Esposito and Vance, two technicians on the Justice League Watchtower. Vance, a mole for Cadmus Laboratories, is mentioned in commentary tracks to be the son of tech mogul Robert Vance, a significant character in the Batman Beyond episode “Lost Soul.” This episode also features Temple Fugate, an original take on Clock King developed for Batman: The Animated Series.

Original Characters: Mandragora crime family hitmen Tony and Cecil, though clearly based on mobsters Paulie Walnuts and Bobby Baccala from HBO’s The Sopranos. Also features a cameo by a young Edgar Mandragora, a telepath from the Batman Beyond  episode “Mind Games.”

Stand-Ins: Steven Mandragora, the target of Huntress’s vendetta, is an amalgam of the comics’ Stefano Mandragora, and Black Lightning’s arch-enemy Tobias Whale.

It’s also worth noting that this episode, as envisioned by writer Gail Simone, was originally meant to feature Barbara Gordon temporarily incapacitated as Oracle, with Huntress and Black Canary acting as her Birds of Prey. With Barbara marked unavailable for usage, Dwayne McDuffie helped her retool the episode to showcase Green Arrow and The Question.

Stand-In: This episode was originally meant to feature Doctor Hugo Strange as The Question’s interrogator, but because of his contemporary usage in the animated series The Batman, he was substituted with the more obscure (but still comics-derived) Doctor Moon.

Original Characters: Appearances by Terry McGinnis and Dana Tan of Batman Beyond.

Stand-Ins: Features a cameo by The Phantasm, a character loosely based on The Reaper from “Batman: Year Two.”

Stand-Ins: Well, this is the one you’ve been waiting for. And after combing through Grodd’s entire Secret Society roster… Devil Ray is the only named stand-in for an existing supervillain from the comics. This is due to the fact that an “Aquaman Embargo” at the time kept Aquaman’s supporting characters from appearing in Justice League Unlimited, due to (soon abandoned) plans for a live action TV series, along with clearance for that stable granted (rather unnecessarily) for an ongoing storyline in HBO’s Entourage  about the development of a fictional Aquaman  movie. Let’s just say we’re all grateful for the modern embrace of the “multiverse” philosophy.

Original/Stand-In: The Master, a stand-in perhaps for Master Kirigi, who instructed Bruce Wayne in martial arts. Here, The Master also serves as a guardian of Nanda Parbat. A couple years later, in “The Resurrection of Ra’s al Ghul,” former Wonder Woman supporting character I-Ching would play a similar role in the comics.

And there you have it! Somehow both more and fewer original characters than I would have thought before looking into it directly. 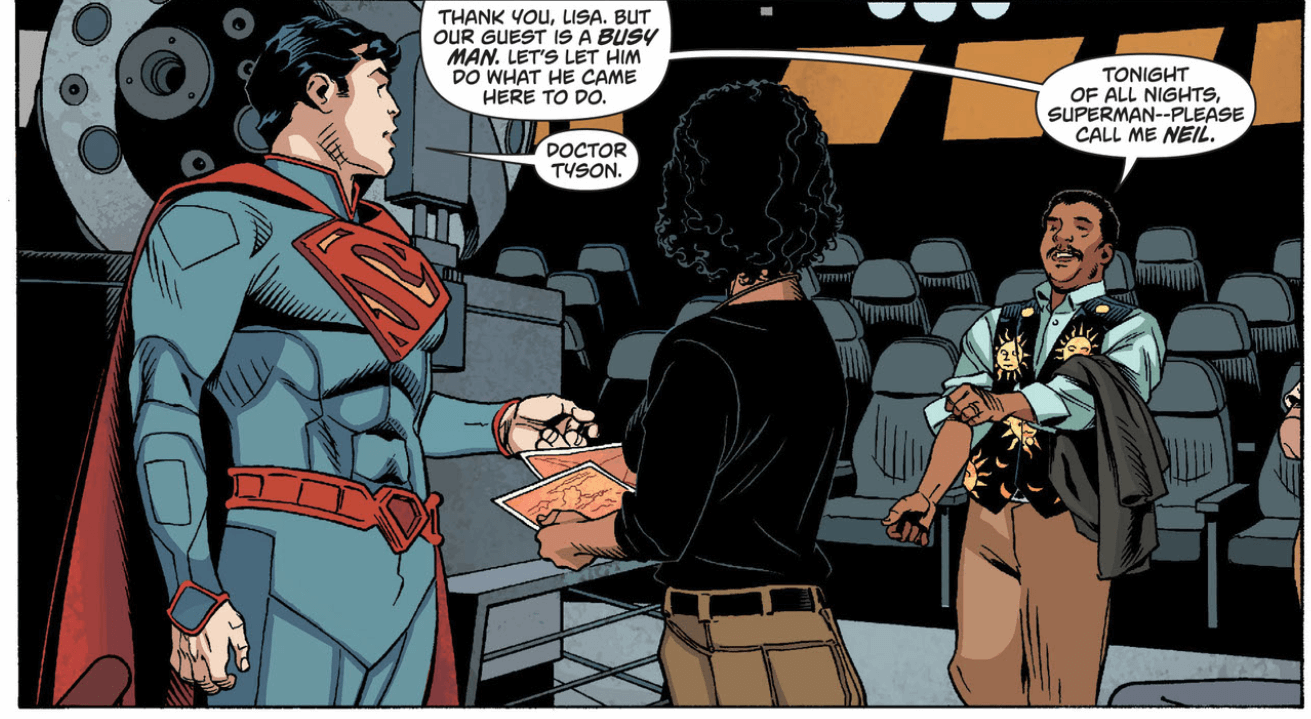 “How far away is Krypton from Earth?” -Nightwing615

Funny you should ask--DC Comics asked this very question to astrophysicist Neil DeGrasse Tyson in 2012, hoping his expertise could provide some canonical answer. To find a proper location for Krypton in the DC Universe which could correspond with a place in our own, Dr. Tyson identified a planet in orbit around a red dwarf star in the southern Corvus constellation, 27.1 lightyears away from Earth. All too happy to accept these findings, these results were canonized in comic book continuity in 2012’s ACTION COMICS #14.

Vote by November 3rd, Or It Happens Again 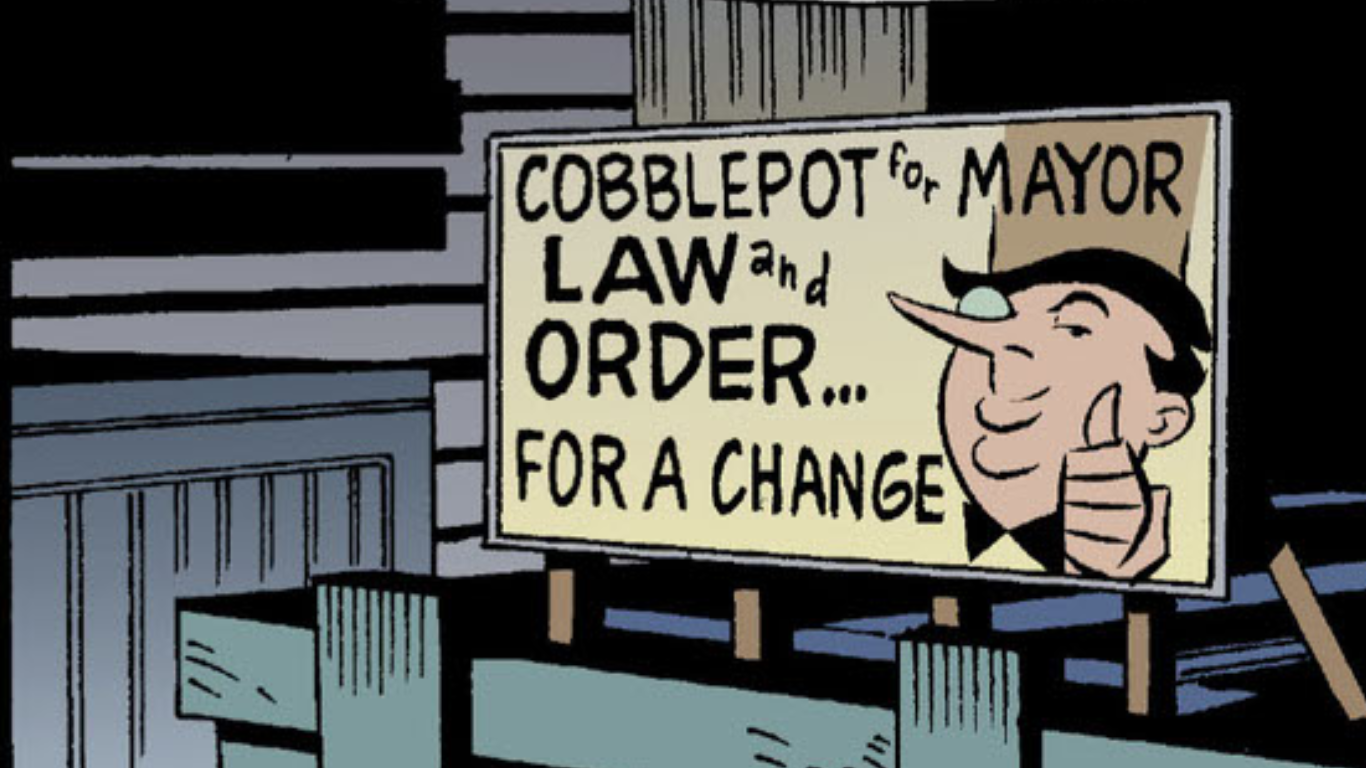 It’s no secret that all four films of the Burton/Schumacher tetralogy take heavy stylistic inspiration from the camp-defining 1960s TV series. The “Penguin for Mayor” storyline is no exception, as its initial roots can be found in the episode “Hizzoner The Penguin.” But just as the sixties series influenced the films, so too have those films influenced the comics in turn. In the excellent BATMAN ADVENTURES series from 2003, taking place in the same continuity as Batman: The Animated Series, The Penguin not only runs for mayor, but wins, and proceeds to use his position for the rest of the series to make Batman’s life as difficult as possible. In Geoff Johns’ BATMAN: EARTH ONE graphic novel series, Penguin has already become the mayor by the start of Batman’s career. Within continuity, James Tynion IV’s current BATMAN run revealed Penguin’s early plans with the enigmatic supervillain The Designer to make a mayoral bid in Gotham, but those plans never came to fruition.

As a final note, I should mention that in Tom King’s alternate timeline of “The Gift,” The Penguin won not just a mayoral campaign, but the position of President of the United States. But surely, in the real world, no one THAT corrupt could possibly win a US presidential race, right? Let alone twice? Well… the answer to that question, readers, is up to you. 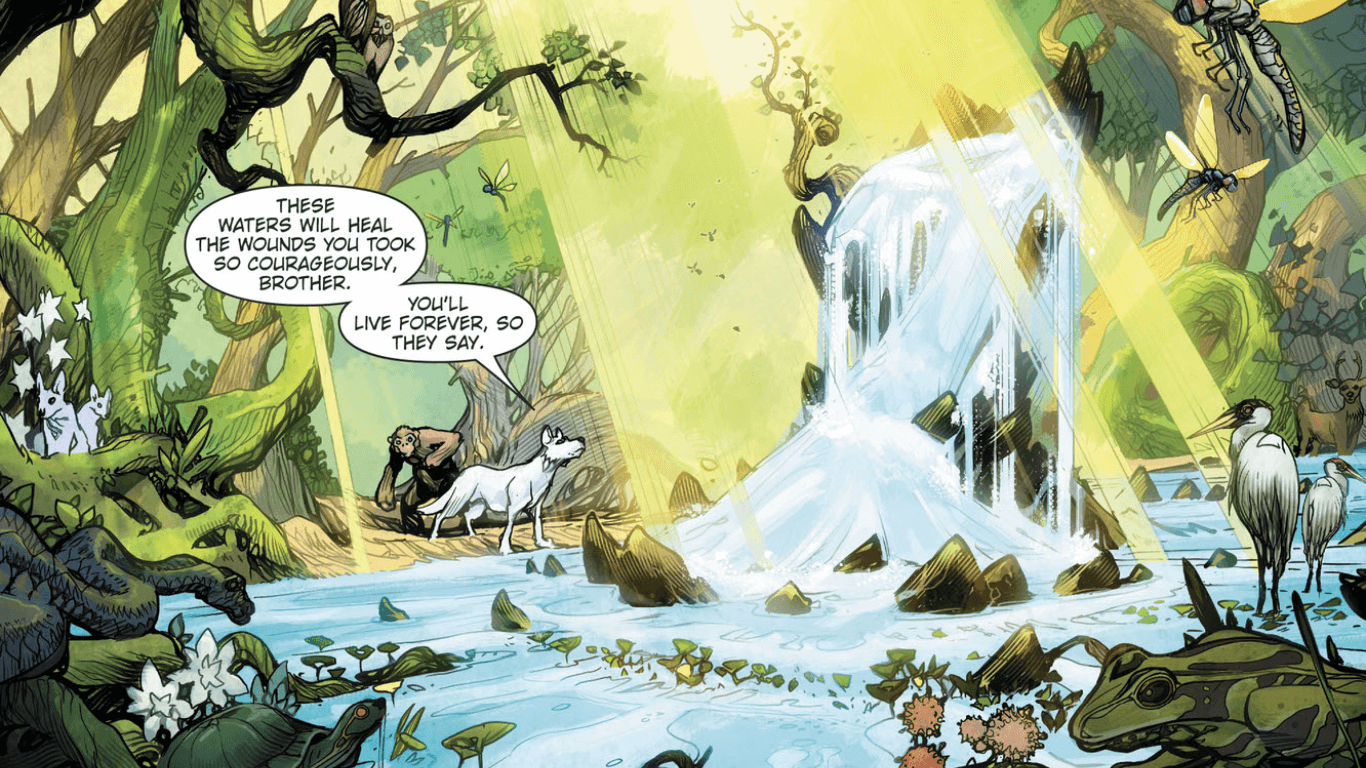 One of the more interesting members of Justice League Dark is the simian sleuth, Detective Chimp. Now I know he’s been around for over half a century. Most of that time on the back burners of DC’s titled characters. Only within the last decade or so has this second banana (sorry, couldn’t resist) Sherlock been catapulted into more prominence within the DCU.

Not remembering his origin, I made use of the DC encyclopedia for that. Very interesting. Having tied his superior intellect to the Fountain of Youth, got me to wondering about it. For instance, is it at all connected to the Lazarus Pit? And has DC ever had an origin story for the Pit? Or the Fountain, for that matter? Who else has come across the Fountain? And what wonderous effects has it had on he (or she) who drank from it?

Just one bit of ‘monkey business’ if you don’t mind. (And yes, for all of you sharp eyed members of our little community, I know a chimp is not a monkey. Just shooting for a little humor here. So, please hold all rebuff comments, thank you.) Now then: has Bobo ever visited Gorilla City? Say, on a case maybe? -Wrightline1.42471

While your theory does hold water (sorry), there’s never been any explicit connection between the Lazarus Pits of Ra’s al Ghul and the Fountain of Youth. The Fountain of Youth has been featured in a number of different incarnations, and its origin is typically the same one you’ll find in folklore ranging from the writings of Herodotus in the 5th century BC to Caribbean folklore in the 16th century -- the latter of which usually forms the basis for appearances of the Fountain of Youth in comics. Like Lazarus Pits, there may in fact be multiple Fountains of Youth throughout the world. Zatara, father of Zatanna, found one in the Amazon rainforest in ACTION COMICS #14. Batman and Robin happened upon a Fountain of Youth in the Florida Everglades in BATMAN #54. There’s even been a Fountain of Youth on Paradise Island, written in William Moulton Marston’s original comics to be the source of the Amazons’ everlasting youth and beauty. But just as in the Caribbean legend, the Fountain of Youth which enlightened Bobo the Chimpanzee and his good friend Rex the Wonder Dog to long life and great intelligence can be found in the legendary region of Bimini in the west Caribbean. This Fountain of Youth was destroyed by The Spectre during his anti-magic rampage in DAY OF VENGEANCE, though its modern day Post-Rebirth status remains unknown. (I should note that 1989’s SECRET ORIGINS #40 provides an alternate origin for Detective Chimp’s intelligence, resulting from his swallowing a tiny alien spacecraft, with the experiments of its denizens altering his brain chemistry. This story has since been disregarded.)

For an origin of the Lazarus Pit, Scott Snyder’s run on BATMAN from 2011-2016 has suggested that the essential component for their construction, Dionesium, can be traced back to the meteor which first immortalized Vandal Savage in the prehistoric age. As full an accounting as we can find of Ra’s al Ghul’s early research into Lazarus Pit development can be seen in the Denny O’Neil and Norm Breyfogle 1993 masterwork, BIRTH OF THE DEMON. The film Justice League vs. Teen Titans has also suggested a novel alternate origin for the pits, as the handiwork of Raven’s father Trigon.

As for the last part of your question, Bobo’s had dealings with Gorilla City on a number of occasions to date. In CRISIS ON INFINITE EARTHS #11, Detective Chimp stands with the rest of DC’s simian characters to defend the city from Shadow Demons. In the 1992 crossover storyline “The Flash/Green Lantern: Gorilla Warfare,” Chimp, as leader of the US government’s “Bureau of Amplified Animals,” dispatches Rex the Wonder Dog to accompany Hal Jordan and Wally West on a mission to Gorilla City. While we don’t see him directly at work in 1999’s MARTIAN MANHUNTER ANNUAL #2, Detective Chimp does indicate there that some of his most regular clientele are Gorilla Citizens, and it follows his work must bring him there often. And in 2007’s JUSTICE LEAGUE UNLIMITED #39, Detective Chimp assists Batman and Elongated Man in finding Gorilla City after it mysteriously disappears.

Well, after all that, it’s time for me to mysteriously disappear myself. But fret not: I’ll be back next week with a whole new batch of mysteries in tow. Until then, all you have to do is ASK… THE QUESTION.