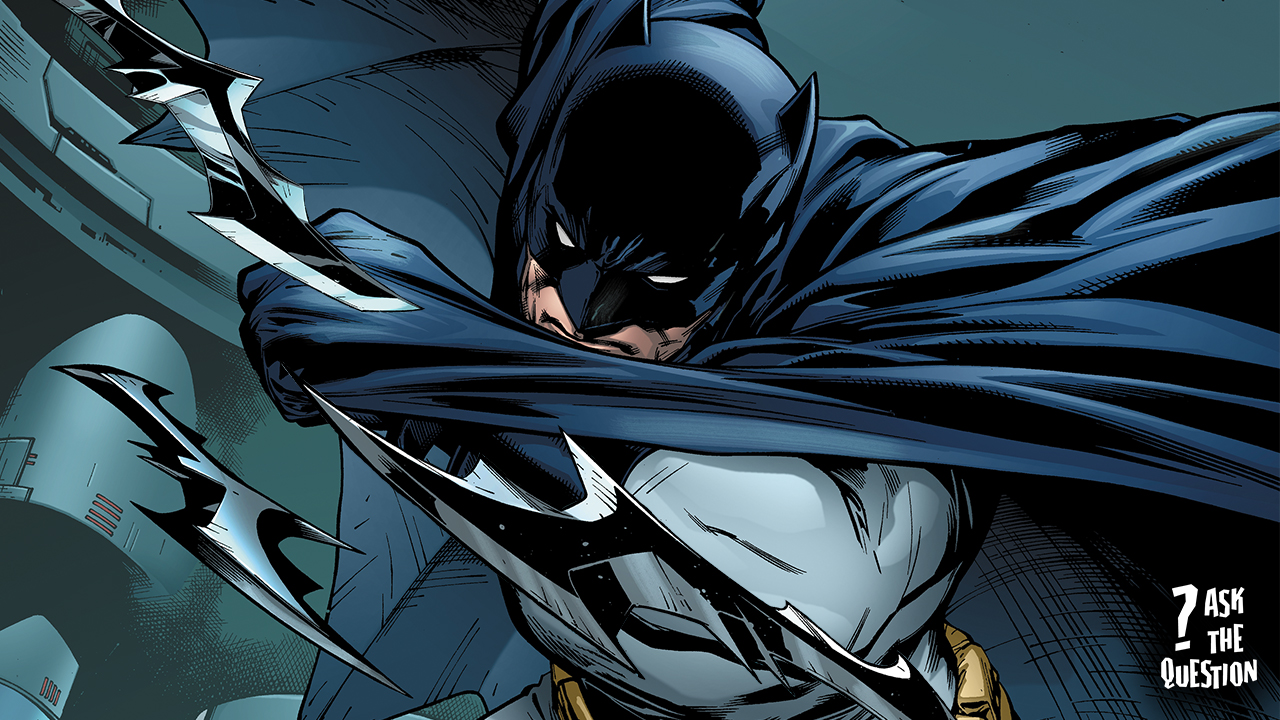 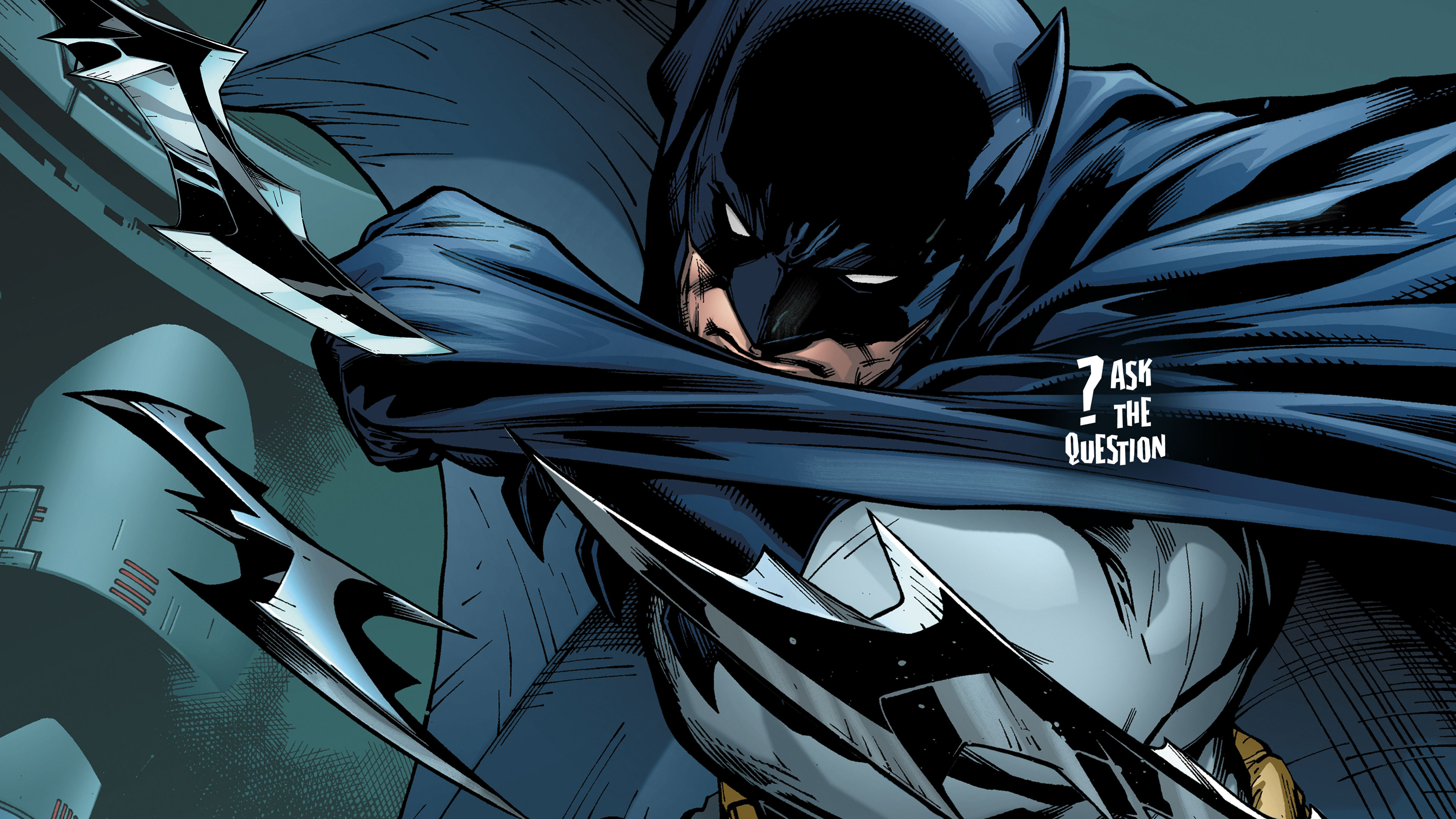 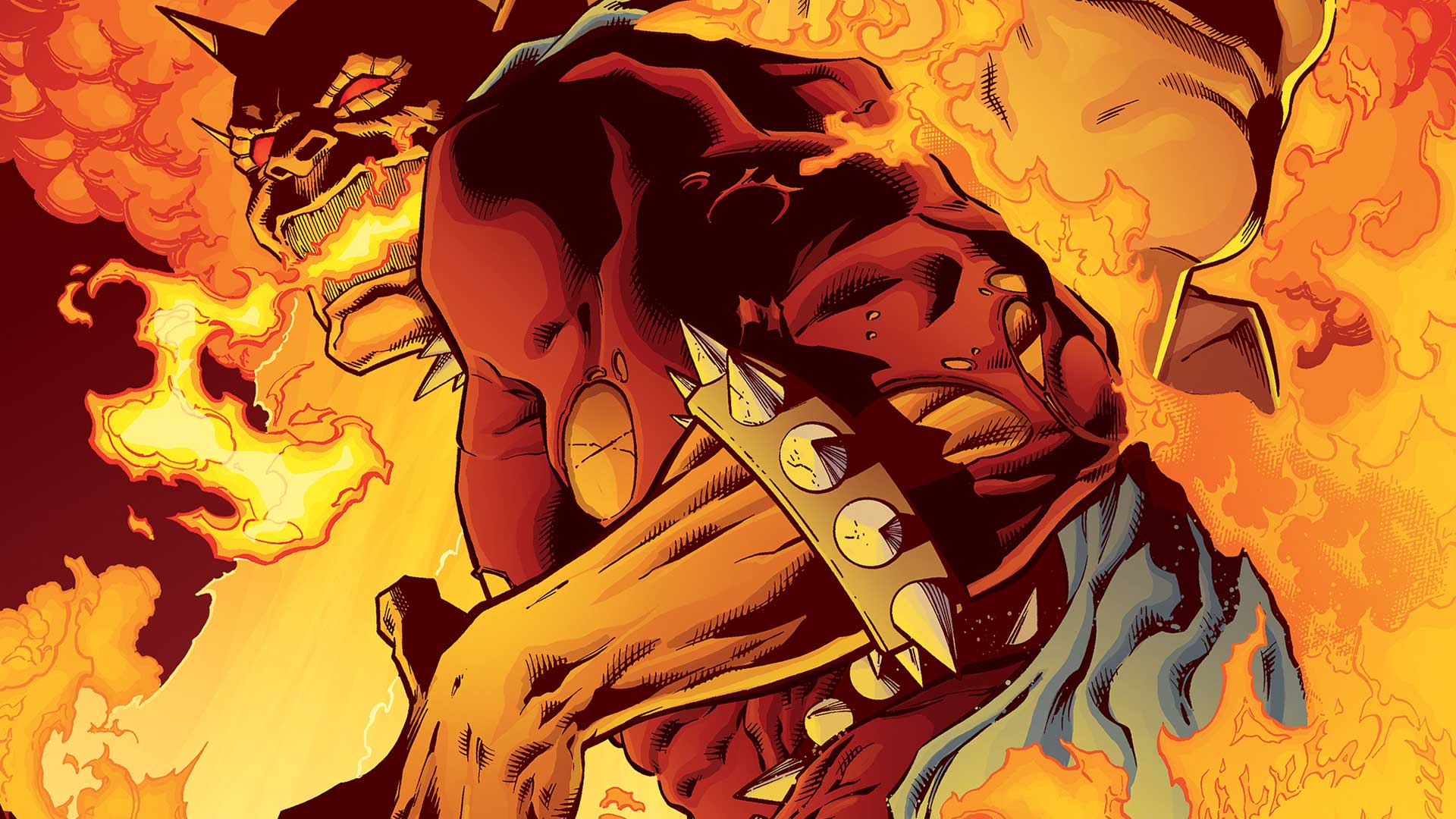 “Why does Etrigan always speak in rhymes?”

The simple answer to that question, SwampThingFan, is that he doesn’t. When Etrigan was first introduced by Jack Kirby in 1972’s ‘The Demon,’ the rhyme to change Jason Blood to The Demon Etrigan was in place, but Etrigan’s penchant for poetry in his speech was used rather sparingly; an affectation employed to chide his enemies and make certain points, much akin to the way an Elizabethan character might rhyme at the end of an act in a Shakespeare play.

In fact, the convention of writing all Etrigan’s dialogue in verse didn’t come into place until 1984, when writer and editor Len Wein gave him the trait for a team-up with Superman in ‘DC Comics Presents’ #66.

But even in modern comics, Etrigan doesn’t always rhyme. In the New 52’s ‘Demon Knights’ series for instance, Etrigan, in the series’ starring role, only rhymed to mark particularly significant points of dialogue.

This is all to say that while Etrigan is known for rhyming, evidence shows that it is not compulsory. An explanation for this is first suggested by Alan Moore in ‘The Saga of the Swamp Thing’ #26, which establishes the class of “Rhyming Demons.” Basically all depictions of Hell in the DC Universe are as a place heavily reliant on intricate class and caste systems among demons, who often rise and fall based on the souls they traffic in. At a certain level of status, some demons speak in rhyme as a way of demonstrating their rank above others.

This is all to say that Etrigan has never been forced to talk in rhyme; he just does it as a way of putting on airs. One must show the lesser demons to respect their betters. 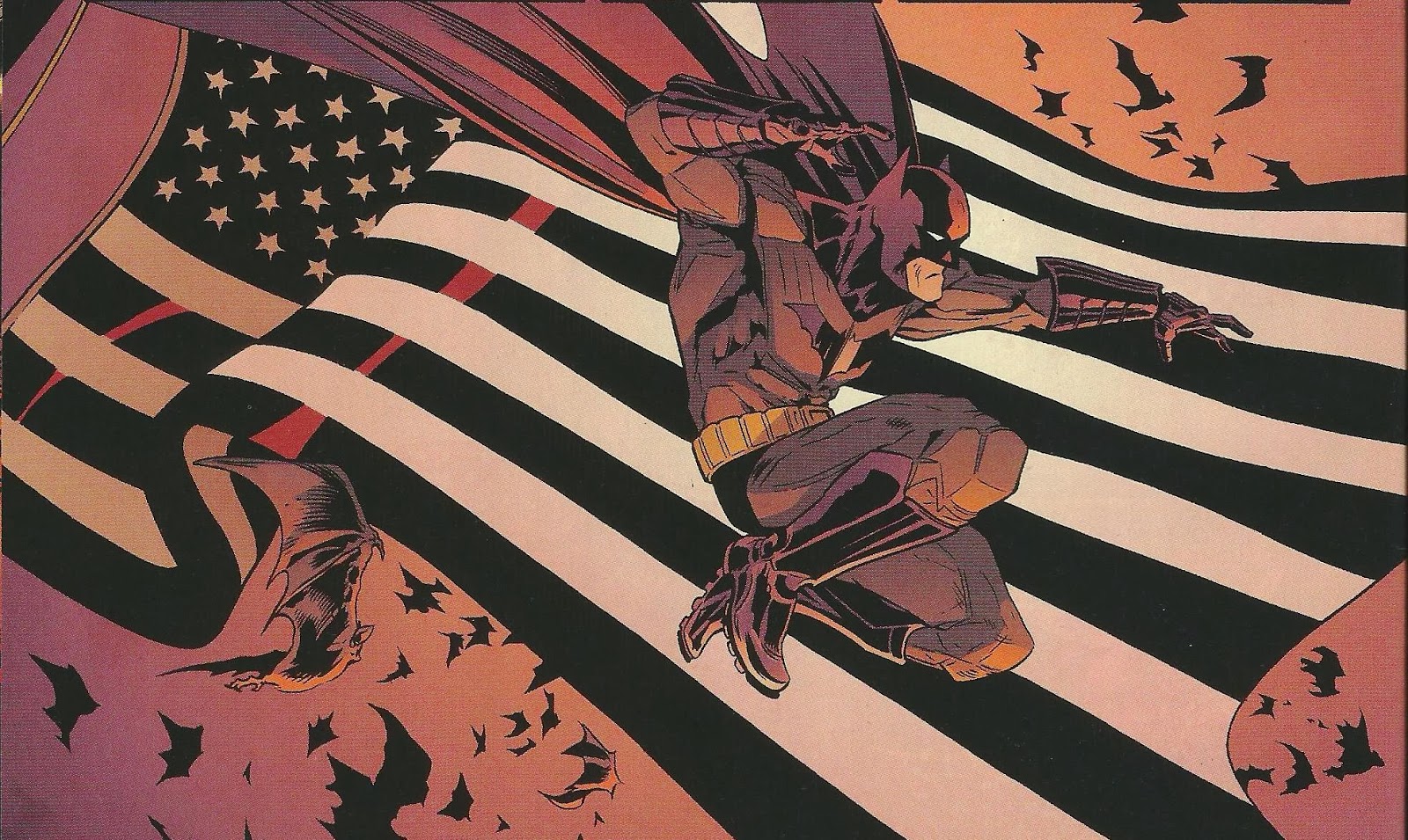 “Has Bruce Wayne ever become president?”

Considering Bruce Wayne’s firmly held political values on urban crime, gun control, and wealth distribution, one might think that such a figure so invested in making the world a better place would seek out public office. But there’s another factor at play: unlike the cover of a playboy billionaire, which allows Bruce to vanish without notice for weeks at a time, there would be no such leeway as a public figure. With Bruce Wayne as president, Batman could not survive. This might explain why throughout the DC Multiverse, there hasn’t been a story yet featuring a President Bruce Wayne.

That’s not to say that Bruce has never dipped his toe into politics. In the controversial 2008 limited series ‘DC Universe: Decisions,’ Wayne publicly endorses Democratic Party candidate Martin Suarez for the presidency — but just like nearly everything Batman does in public as Bruce Wayne, there were other reasons for his actions at play. 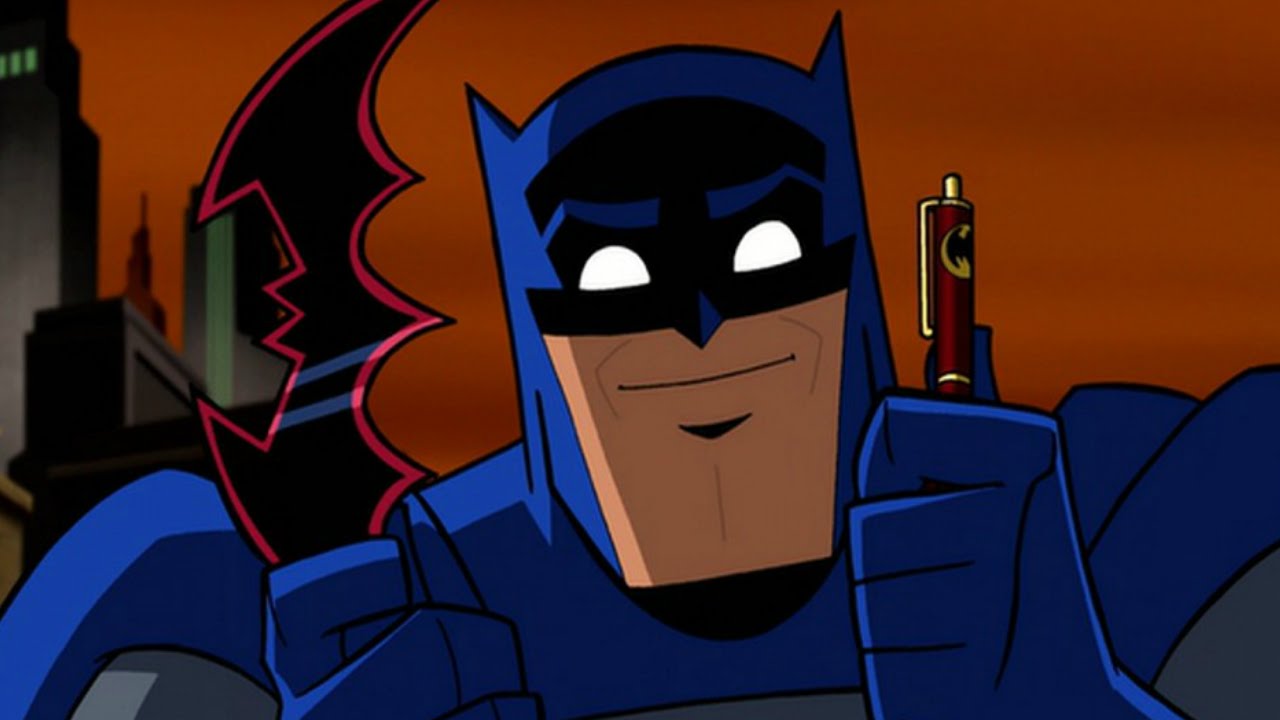 “Has Batman always used batarangs? And if not, when did he start?”

Not always, but nearly! In publication order, the batarang first appears in ‘Detective Comics’ #31, only 4 issues after Batman’s debut. In his first encounter with one of his earliest villains, The Mad Monk, Batman uses his “baterang” (as it was spelled in early appearances) to break The Monk’s concentration as he attempted to hypnotize the Caped Crusader.

Years later, in 1954’s ‘Detective Comics’ #244, Batman’s signature weapon is finally given a backstory. And like so many of Batman’s allies throughout the years, it can be traced back to the circus. After trailing a thief trying to lose Batman’s tail in the sideshow crowd, an Australian boomerang expert named Lee Colins taught Batman the art of the boomerang in gratitude — even helping Batman develop the very first batarangs in his arsenal. Seeing how Bruce Wayne was already operating as Batman at the time, however, we can surmise that the batarang has not always had a place on Batman’s utility belt. But that doesn’t change the fact that by today’s standards, Batman would be naked without them. 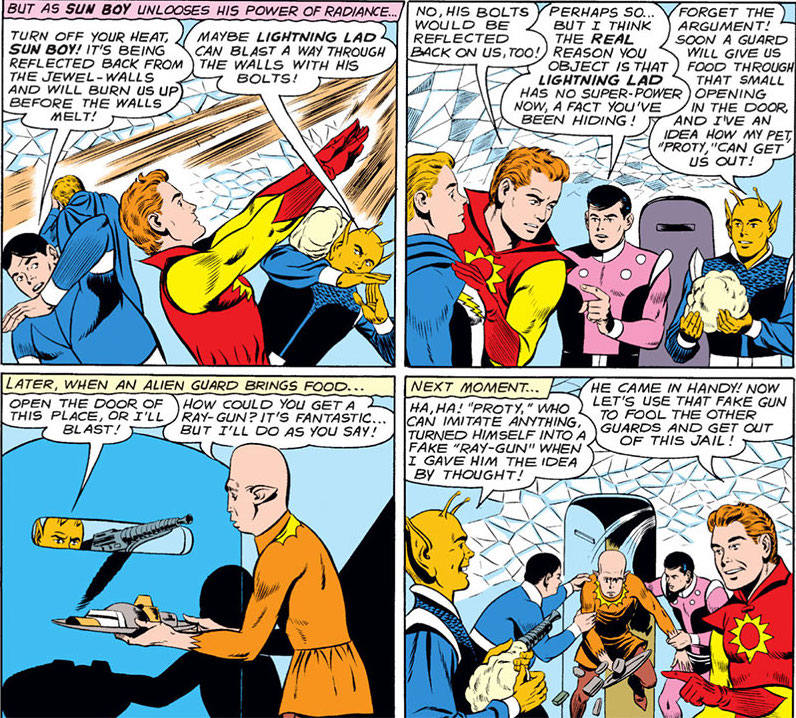 “Does Proty qualify as a super-pet or a sidekick?

My reflex action is to think he was in the super-pets brigade, but upon deeper consideration, I’m more inclined to think sidekick. He certainly had ‘higher order thinking’ than associated with super-pets. Proty put a Legionnaire ‘on ice’ to take their place and sacrifice himself to resurrect Lightning Lad. That takes serious tactical planning.”

I’m not certain I agree with your premise here, @DS-a… particularly the point that “higher order thinking” separates a Super-Pet from a Sidekick. The independent nobility and valor of such fine heroes as Krypto, Streaky, and Comet cannot be denied.

For those without their Legionnaire flight rings, the shapeshifting Proty first appeared in ‘Adventure Comics’ #308, where he was taken in by Brainiac 5 as his pet. Proty sacrificed himself 4 issues later, in ‘Adventure’ #312, to save Lightning Lad’s life. While its true that the actions Proty takes to do so demonstrate sentient ability, I’d argue that any other Super-Pet would do no less.  As you say, Proty’s successor, the second Proty who first appears in ‘Superman’s Pal, Jimmy Olsen’ #72, goes on to formally join the Legion of Super-Pets.

Here, then, is my final thought on the matter: a Super-Pet should not be ranked below a sidekick at all. To wit, Supergirl and Superboy have never been Superman’s sidekicks, the way Robin is to Batman. The only figure in Superman’s life who has ever truly filled that role… would be Krypto. A Super-Dog who himself has demonstrated uncanny intelligence and strategy when partnered with the Man of Steel. Therefore, I would conclude that super-pets should rightfully be considered a *sub-set* of sidekicks.

Proty is a Super-Pet, and Proty is a Sidekick. These are not contradictory terms. After all, how could you expect a shapeshifter to stick to one label?

That does it for me this week, friends. Until I return, keep on sending your most pressing cases over to my office. Unanswered mysteries of the DC Universe may torture your mind, but it never hurts to ASK… THE QUESTION.