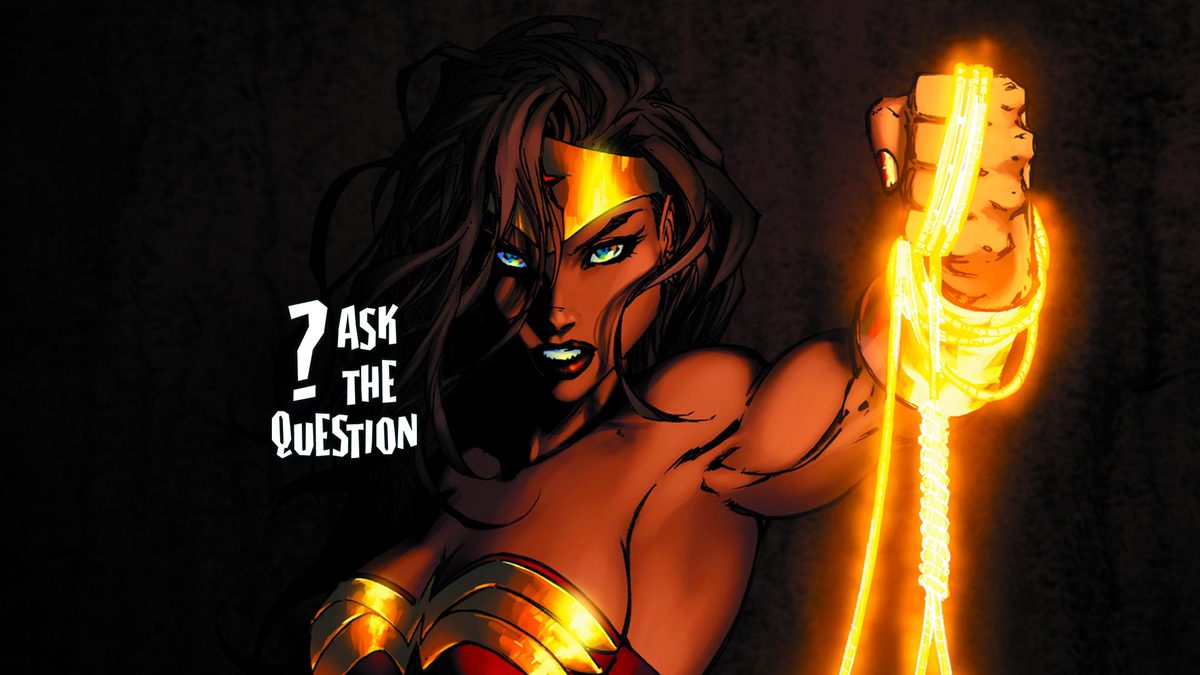 Ask...The Question: Has Anyone Ever Resisted Wonder Woman's Lasso of Truth?

YOU CAN'T HANDLE THE TRUTH! 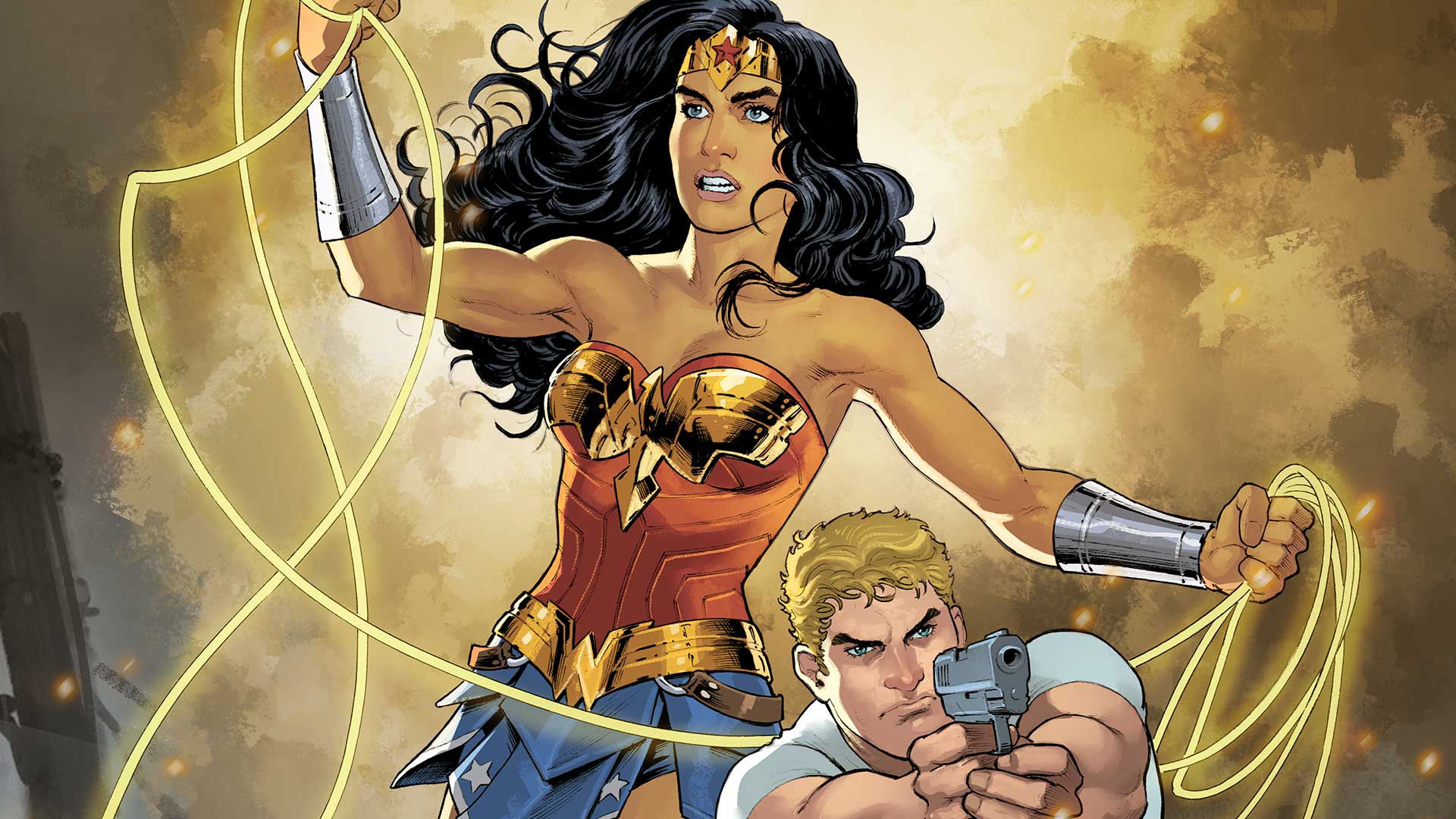 “I was wondering if there was a time that when Wonder Woman used her Lasso of Truth on somebody, they manage to break the truth spell and tell her a lie?”

Wonder Woman’s Lasso of Truth is one of the most formidable artifacts in the DC Universe — and, when used effectively, one of the most terrifying. There are, however, a handful of individuals who have stood up to its awesome power:

In Flashpoint, Colonel Steve Trevor is momentarily able to hold out against the effects of the wicked Wonder Woman’s lasso… though he ultimately succumbs to its sway.

As an artifact of the gods, the Lasso of Truth doesn’t work against the patrons of Diana’s own pantheon, and is likely as ineffective against gods from other cultures as well — as seen in the Justice League Unlimited episode “Hawk and Dove,” and Wonder Woman’s New 52 series. This also goes for The Spectre, as a nigh omnipotent agent of God’s wrath.

The Lasso of Truth may also be resisted by those without the sanity or mental capacity to reliably tell truth from lies in their own minds: such as Bizarro in 2008’s Trinity, or The Joker in both his own ‘70s series and Injustice: Gods Among Us.

Prometheus, a JLA villain from the ‘90s, once claimed that he could resist the effects of the lasso through sheer force of will, but this was never tested. Plus, he’s a known liar.

The most creative strategy against the Lasso of Truth, however, was one employed by the JLA villain Rama Khan, an ancient Atlantean sorcerer. Rama Khan fought against the Lasso’s grip by shaking Wonder Woman’s own faith with a truth that she herself could not accept: unravelling the lasso until Diana could rediscover her own truth within. Perhaps the Lasso of Truth’s true weakness is that it can only be as strong as its wielder. 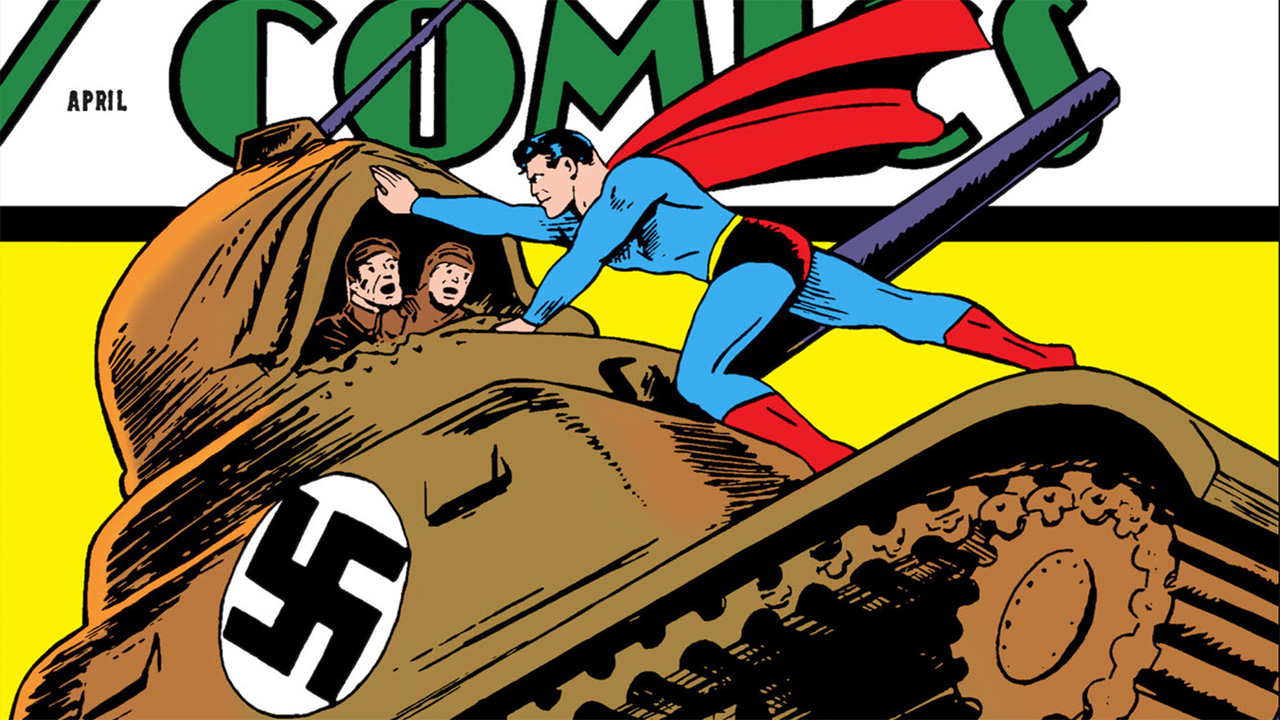 With its regular appeals to readers to support the Allied war effort by investing in war bonds, DC Comics was a staple of American culture during the years of World War II. By your request, presented for you here is a complete accounting of comics published by National Allied Publications, Detective Comics Incorporated, and All-American Publications from 1939-1945: the three companies which would merge to become National Comics Publications, and later DC Comics. 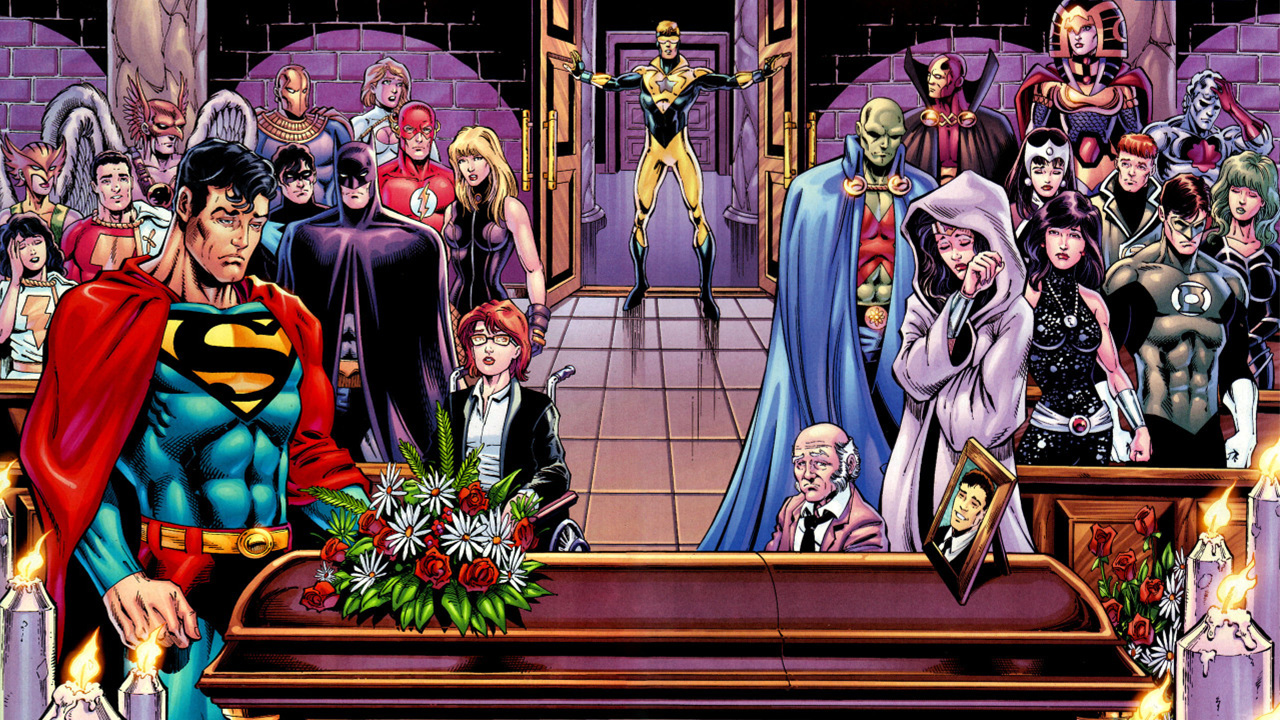 “Who is the Sean Bean of DC? (Who’s had the most on-screen/on-panel deaths?)”

Death is kind of like the flu in the DC Universe: basically everyone gets it at some point, and then they get over it. And because resurrection is a foregone conclusion, some unlucky characters have the opportunity to cross Death’s door more often than others. It sometimes feels as if the gates of the afterlife are less secure than even Arkham Asylum. Donna Troy, The Joker, Doomsday — all have seemingly perished on multiple occasions only to be brought back from certain oblivion. But the character who’s died the MOST before our eyes is indisputable:

After a nanotech experiment gone wrong, Mitch Shelley was given the power of unlimited resurrection. And every time he died, he’d return from the grave with a different power — a feat he’d pull off approximately once per issue, if not moreso (as was the case in his crossover with Hitman, where Tommy Monaghan continually shot Shelley until he generated a useful ability). Unfortunately, no matter how many times you do it, dying never gets any easier.

CHECK OUT THE BIG BRAIN ON LEX 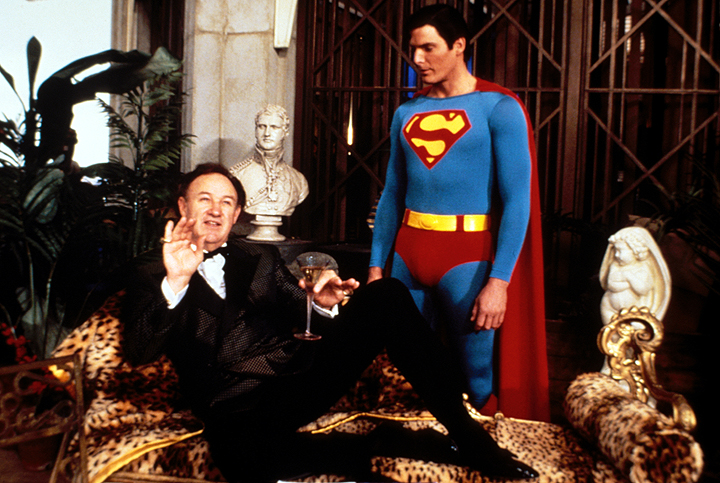 “Has Lex Luthor ever given his IQ to someone? If so, what is it?”

Allow me to quote Mr. Luthor directly, as played by the great Gene Hackman in 1978’s Superman: The Movie —

“Do you know why the number 200 is so vitally descriptive to both you and me? It’s your weight and my I.Q.” 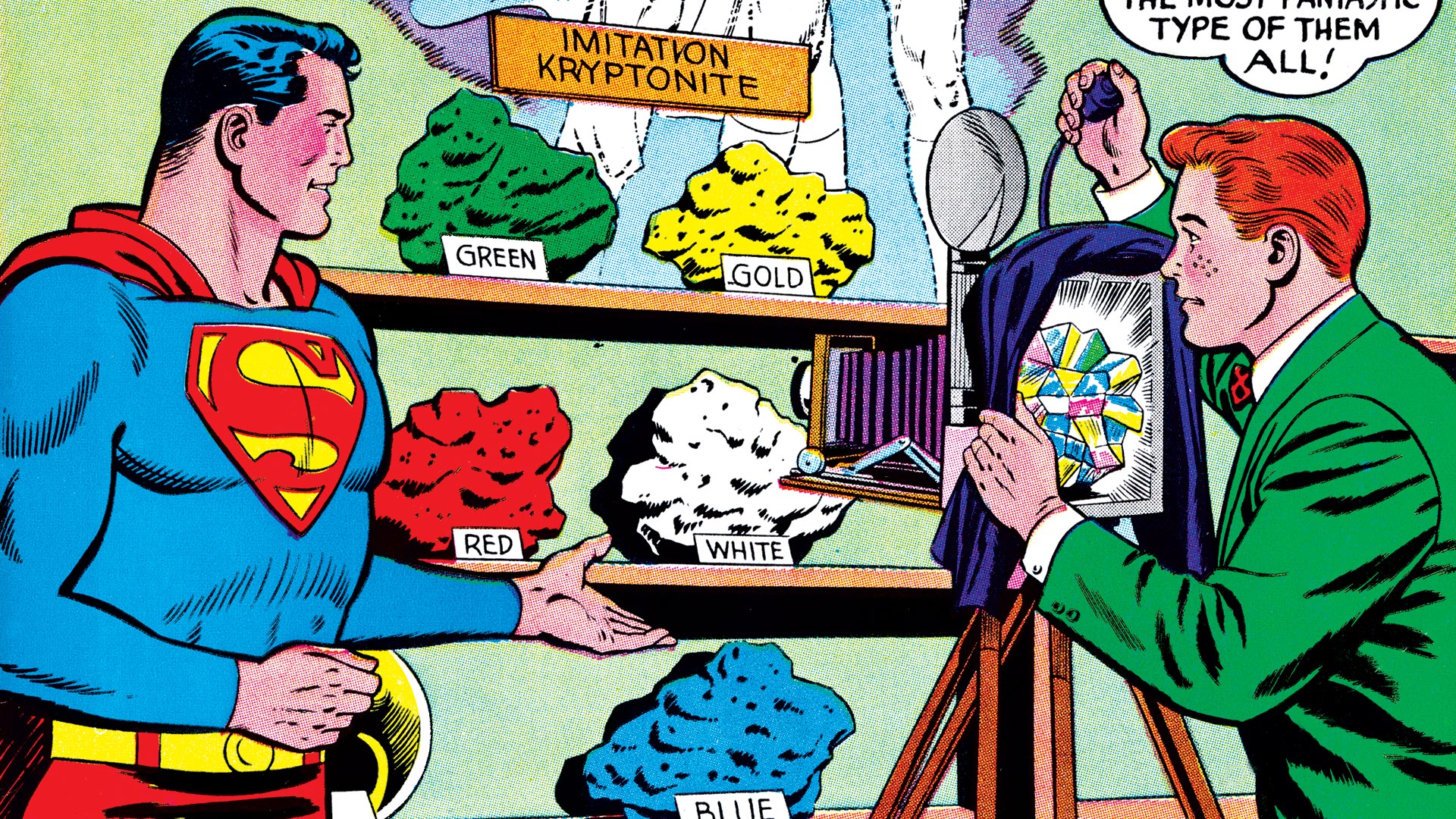 “What are the different types of Kryptonite and their effects?”

All right, let’s run through this real quick. Here’s a primer on the many colors of Kryptonite:

RED: A wild card. Red kryptonite can do pretty much anything to a Kryptonian upon exposure, more or less at random. Most common effect is a personality change, turning the altruistic Superman and Supergirl into jerks. But it can also turn them giant, give them ant heads, cause rapid hair growth, pretty much anything the writer can think of. The only consistent element is that the effects wear off after a certain period of time, usually 24 or 48 hours (though sometimes 72) — unless they’re continually exposed to the Red Kryptonite.

WHITE: White Kryptonite, appearing primarily in the Silver Age, has a lethal effect on all plant life — no matter its planet of origin. Keep away from Poison Ivy.

YELLOW: A fake variety of Kryptonite that doesn’t really do anything. Luthor made it up to mess with Superman.

SILVER: Like Yellow Kryptonite, Silver Kryptonite was originally just a hoax to mess with Superman — but one by Jimmy Olsen instead of Luthor. Later, Silver Kryptonite is determined to be real: causing vivid hallucinations in Kryptonians exposed to it, and also possessing certain magical properties.

PINK: Pink Kryptonite is sort of a gag variety with only a couple appearances through comics and extended media, altering the sex or sexuality of Kryptonians exposed to it. A fanfiction staple.

PURPLE: One of the oldest forms of Kryptonite in comics, but one with identical properties to Green Kryptonite. May simply exist as a colorist error.

PLATINUM: The rarest type of Kryptonite, which bestows Kryptonian abilities on a non-Kryptonian. Superman gave Batman the only known piece of Platinum Kryptonite in Detective Comics #1000. Batman later regifted it to someone else.

KRYPTONITE-X: A synthetic form of Kryptonite radiation which activates powers in Kryptonians rather than weakens them, but at an accelerated rate which makes them difficult to manage.

X-KRYPTONITE: A synthetic Kryptonite created by Supergirl, which gave Streaky the Supercat her Kryptonian-like powers.

BIZARRO RED: Has the same randomized effect on humans that Red Kryptonite has on Kryptonians.

BIZARRO WHITE: Can be used to stabilize a Bizarro Clone.

MAGNO: A super-magnetic form of Green Kryptonite that’s attracted to creatures or objects from Krypton.

JEWEL: Formed from the remains of Krypton’s Jewel Mountains, Jewel Kryptonite amplifies the low level psychic abilities of Kryptonians in the Phantom Zone to contact and interact with the outside world.

OPAL: Synthesized by Terry Sloane on Earth 2, exposure to Opal Kryptonite can drive Kryptonians insane for a brief amount of time.

But of all these forms of Kryptonite, there’s no variety real or synthetic that can keep me from sating your ravenous curiosity every week in this humble column. My only request of you is that you continue to ASK… THE QUESTION.