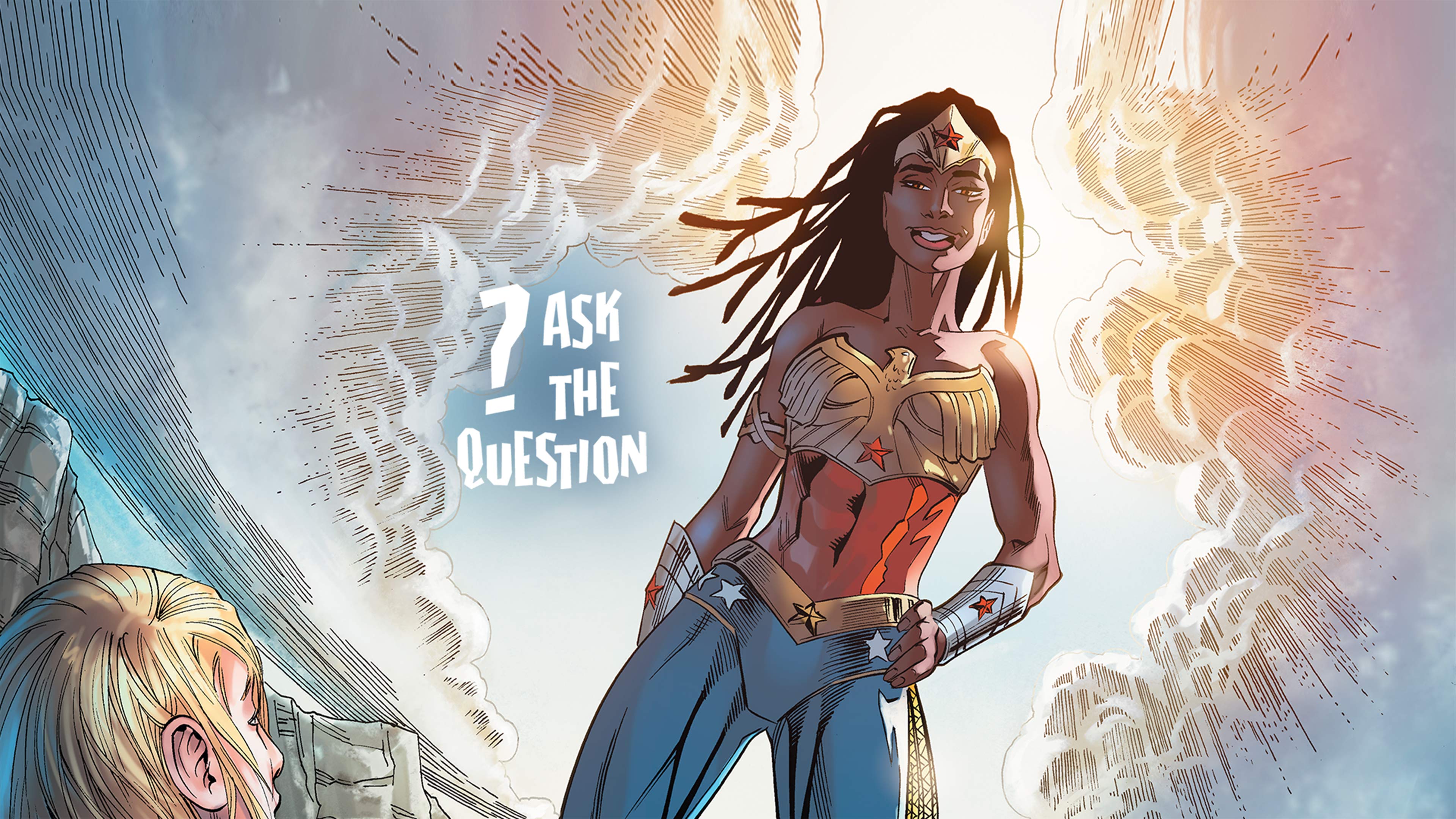 Ask...The Question: Did Gloria Steinem Inspire the Creation of Nubia? 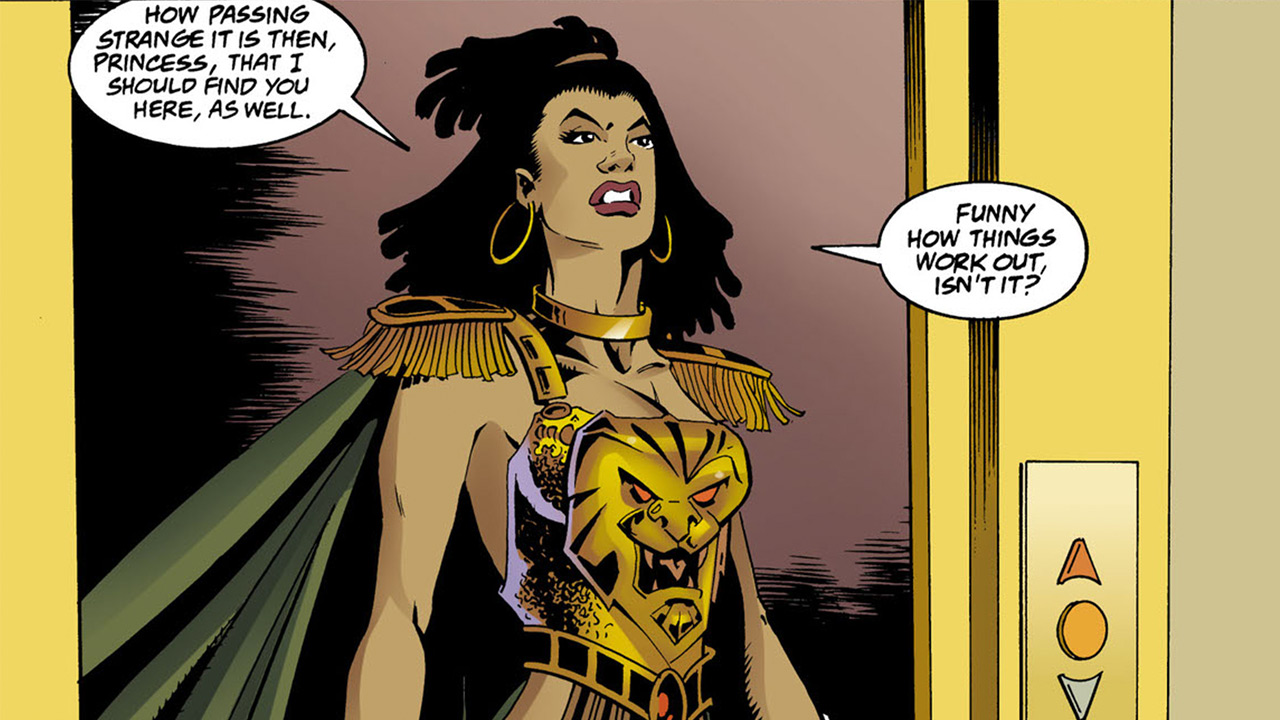 “Been catching feminist icon Gloria Steinem making the rounds the last few days. On an NPR program she was promoting her new book, reflecting on the past and Ms. Magazine. Yes, I remember when that first came out. But, be that as it may, she also commented on Wonder Woman. How she had been her heroine as a child. And, in a roundabout way, had been responsible for the creation of Diana’s black sister, Nubia. I remember the original 3 part story of her creation pretty well. The whole dark clay, light clay thing, I thought was very creative by Mr. Kanigher. I lost track of her after a few more appearances later on. Is she still active in the DCU?”

For those unfamiliar with their Pre-Crisis Wonder Woman lore, there was a period in the sixties when Diana was stripped of her powers and reinvented as a fashionable, globetrotting secret agent. Gloria Steinem, through the medium of Ms. Magazine, led a groundswell campaign to restore Wonder Woman to her former place of empowerment. It was due to Steinem’s efforts that the narrative arc of Wonder Woman was righted back on the course we recognize today, and the mythological nature once again returned to the foreground — and this time, as a nod towards intersectional feminism, Diana was given a dark-skinned sister by the name of Nubia.

Debuting in 1973 under the tenure of Wonder Woman scribe Robert Kanigher, Nubia is considered by many comic historians to be DC’s first black female Super Hero. (But, by nature of her origin, not the first African-American female Super Hero — that would be Bumblebee, in 1976’s Teen Titans #45.)Though erased from continuity when Wonder Woman’s history was rebooted after 1985-86's Crisis on Infinite Earths, Nubia returned in 1999 for Wonder Woman Annual #8, where she was reintroduced as Diana’s predecessor — the LAST Amazon to win the Tournament of Grace, which allowed her to venture into man’s world as Diana once did.

Nubia has never quite gotten out of Wonder Woman’s shadow, but she has made a few significant appearances in recent years. Nubia appears as a warrior of Paradise Island in writer Tom Taylor’s Injustice series, Grant Morrison’s Wonder Woman: Earth One graphic novels, and in Sholly Fisch’s delightful Scooby-Doo Team-Up series. Multiversally speaking, since Final Crisis, the Nubia of Earth-23 has stood in as her world’s own Wonder Woman.

But dialing into mainstream continuity, Nubia has been absent from the DC Universe for quite some time… until July of 2019, when she returned as a resident of Paradise Island in Wonder Woman #75. Unfortunately, this reunion is darkened by the revelation that Nubia has thrown her support behind Darkseid’s wicked half-Amazon daughter Grail, who has challenged Hippolyta for control of Themyscira. Can Wonder Woman’s one-time sister be defeated, or won over to the side of light and truth? Find out next summer, when the issue arrives on DC Universe. 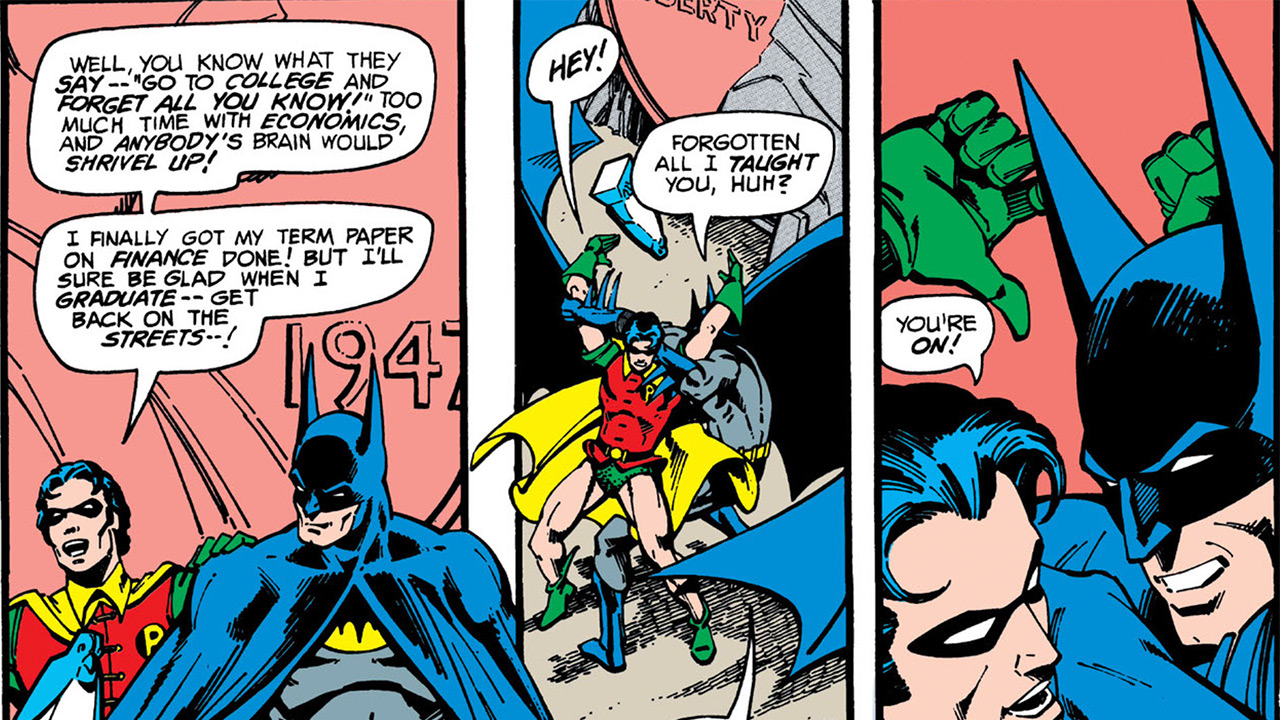 “There have been many references over the years to Dick Grayson going to college (The New Batman Adventures Episode “Old Wounds” comes to mind). What degree did he actually get and where did he get it?”

In Batman: The Animated Series, Dick Grayson is occasionally seen in attendance at Gotham State University. With this narrative contrivance, BTAS writers were able to explain Batman’s frequent solo adventures while continuing to draw on Robin, who could be nearby whenever necessary. When unseen, we could safely assume that Dick was attending to his academic future.

In the comics, however, Dick Grayson attended Hudson University, the workplace of such illustrious professors as Dr. Martin Stein. At Hudson, Dick Grayson completes a law degree, which leads him down two roads: in stories set on the Golden Age Earth-2, Dick Grayson eventually becomes a full partner at the consumer research law firm of Cranston and Grayson — which later becomes Cranston, Grayson and Wayne, when Bruce’s own daughter Helena follows Dick’s career path.

But in the Post-Crisis Earth, Dick uses his law degree to pursue a career in criminal justice, leading to his work as a police officer when he arrives in Blüdhaven (or, in DCU’s Titans, Detroit).

CALL FOR BACK UP 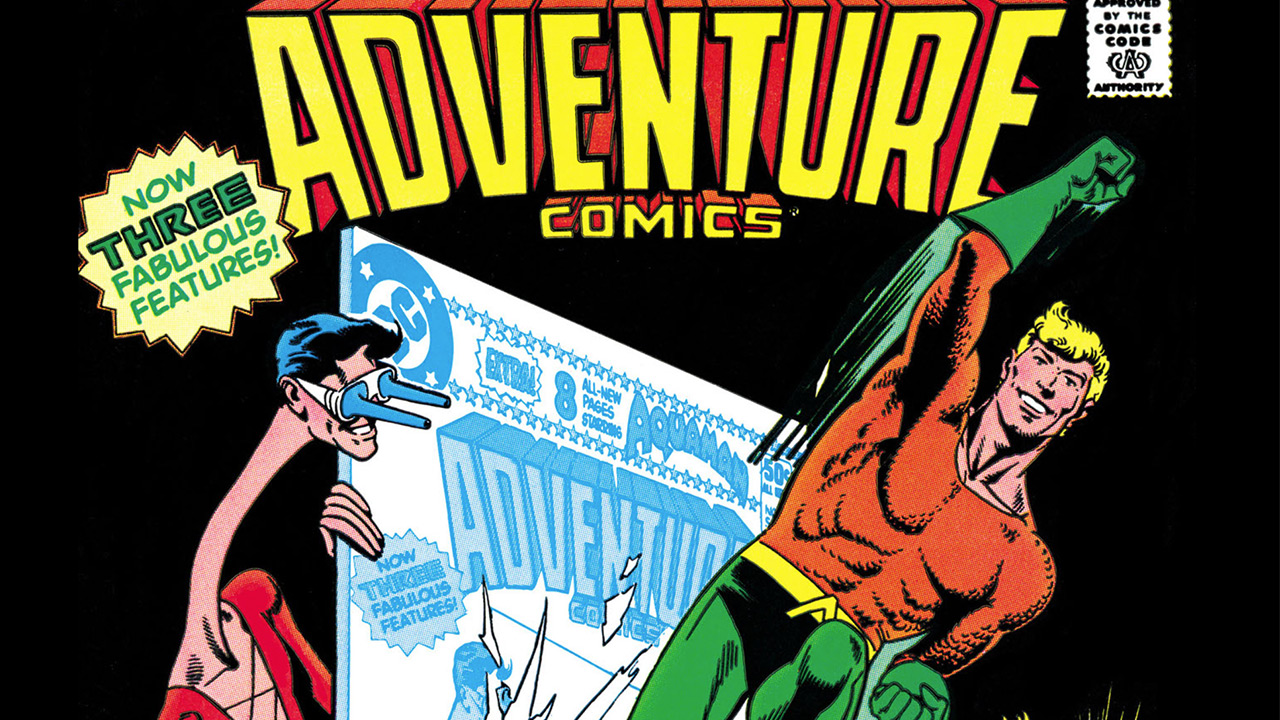 “When did backup stories finally die out? If we just consider the big three former anthology titles - Action, Detective and Adventure - when did they primarily become single-story books focusing on the lead character (Superman, Batman, and whoever’s name was featured on the cover of Adventure) rather than being true multiple-story books or even books with e.g. a 14-page lead story and 8-page backup?”

In the nascent years of the comic book publishing industry, it was quite rare for a single story or character to occupy the entirety of an issue. Rather, it was far more common for early comics to take the forms of anthologies, where multiple stories by multiple creative teams were featured all at once. Such was the case for DC’s three flagship anthology titles: Action Comics (which featured Superman as its lead hero in its first issue), Detective Comics (where Batman did not appear until the twenty-seventh issue), and Adventure Comics (which was originally called New Comics from issues #1-11, and then New Adventure Comics from issues #12-31).

Action Comics would feature back-up stories such as Tex Thompson, Zatara, and Tommy Tomorrrow for hundreds of issues. The last non-Superman holdout regularly published in Action Comics for some time was Congo Bill, which made its last regular appearance in Action Comics #261, in 1960. This extinction can be placed on the shoulders of Supergirl, whose increasing popularity demanded a more robust feature in the back pages of Action Comics. But in 1969, Action Comics returned to its anthological roots, often publishing new stories or reprints after its main Superman story from the Legion of Super-Heroes, the Teen Titans, Green Arrow, The Atom, or Aquaman.

Superman took full rein of his series for a significant amount of time beginning with 1983’s Action Comics #551, when the Aquaman backup came to an end in the previous issue. Action Comics would still occasionally feature multiple stories, but all would focus on Superman or one of his supporting cast. This lasted for fifty issues, until the “Action Comics Weekly” effort which began in 1988 with issue #601. For one year, Action Comics released a new issue every week, featuring a wide variety of characters throughout the DC Universe — including Superman of course. This continued until 1989’s Action Comics #643, when the book became a true solo project under the pen of George Pérez… though the occasional back-up story has still featured in Action Comics from time to time since then, even into Grant Morrison’s run in The New 52.

Like Action Comics, Detective Comics featured a bevy of back-up stories for a good long while of its shelf life. Slam Bradley, Elongated Man, Martian Manhunter, and the Boy Commandos all shared a banner with the Dark Knight. In 1968’s Detective Comics #384, the book was split between stories of Batman and the freshly minted sensation of Batgirl (or, occasionally, Robin). This lasted until 1971’s Detective Comics #414, when back-up features unrelated to the Bat-Family began creeping back into the book once more. From this point on, Batman would occasionally feature in a single book-length story, but back-up features, whether related to Batman or not, would retain their presence. Detective Comics would seldom be a solo title again until 1986, when Dennis O’Neil took over editorial duties from Len Wein, beginning in 1986 with Detective Comics #568. But like Action Comics, there have been many periods since then where back-up features and split billing have made their way back into Detective — this has been true specifically for Greg Rucka’s Batwoman and Question run on the title in 2010, and even for particular issues in The New 52.

Adventure Comics, for its run from 1938 until 2011, was always the purest of DC’s anthology titles. No single hero ever defined it the way Superman did Action, or Batman did Detective. The closest thing Adventure Comics had to that may have been young Clark Kent as Superboy, and/or the Legion of Super-Heroes, and even they couldn’t be depended on to show up for every issue. There were times when one or the other might make up the entirety of the book’s contents, but Adventure never strayed too far from its anthological roots.

Here’s the facts, Mark: DC’s anthology titles have NEVER completely stopped being anthology titles, as long as they’ve been published. There have been long runs where only single stories were featured in each title, but the doors are always open for a return to their original format.

So to answer your initial question of when back-up stories died out: they never really did. And perhaps they never will.

And as long as I continue to live, I’ll be available to take on your cases in THIS anthology. All you have to do is ASK… THE QUESTION.