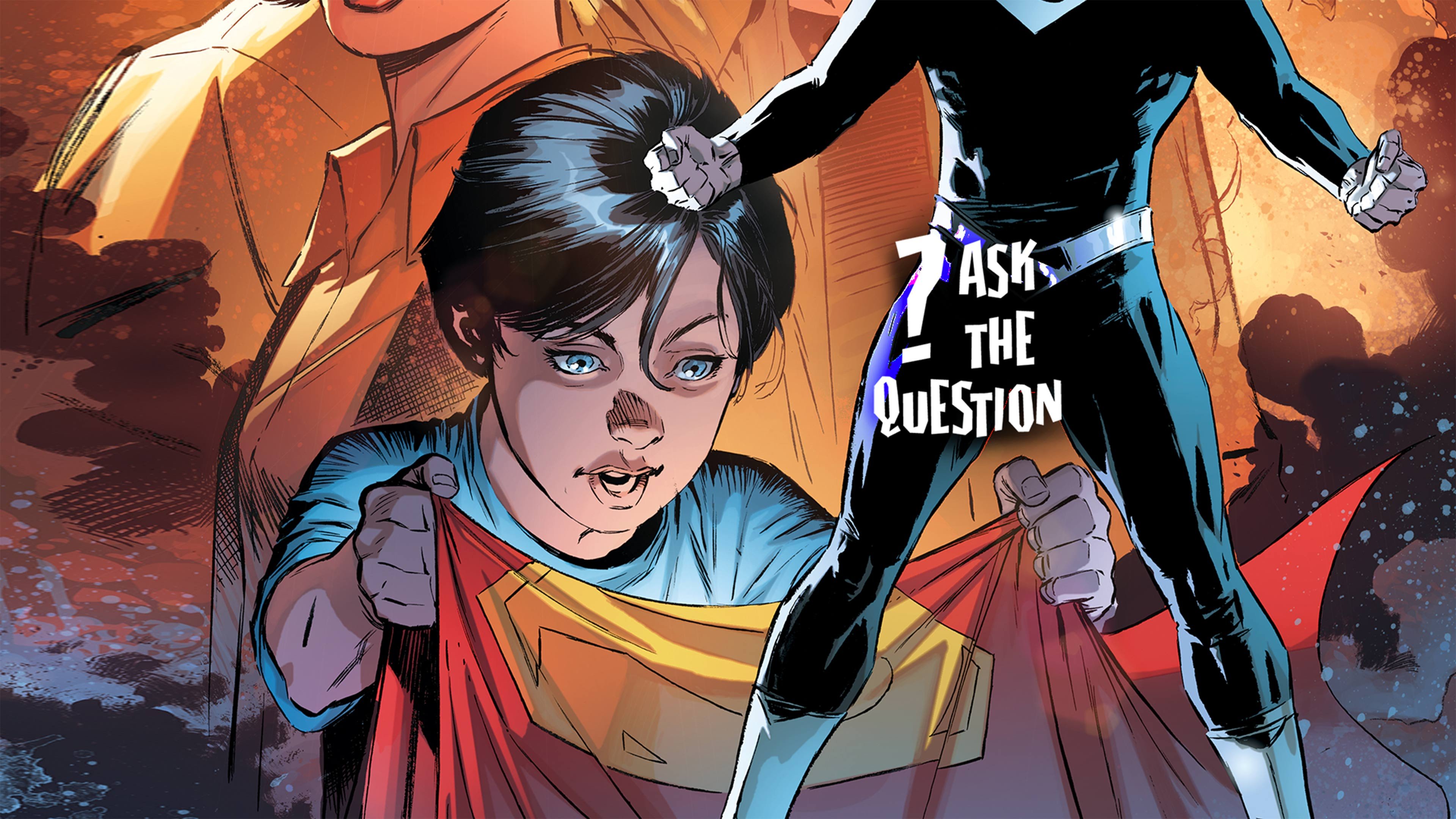 Ask...The Question: Are There Stories of Jon Kent Growing Up?

THIS IS HOW I DISAPPEAR 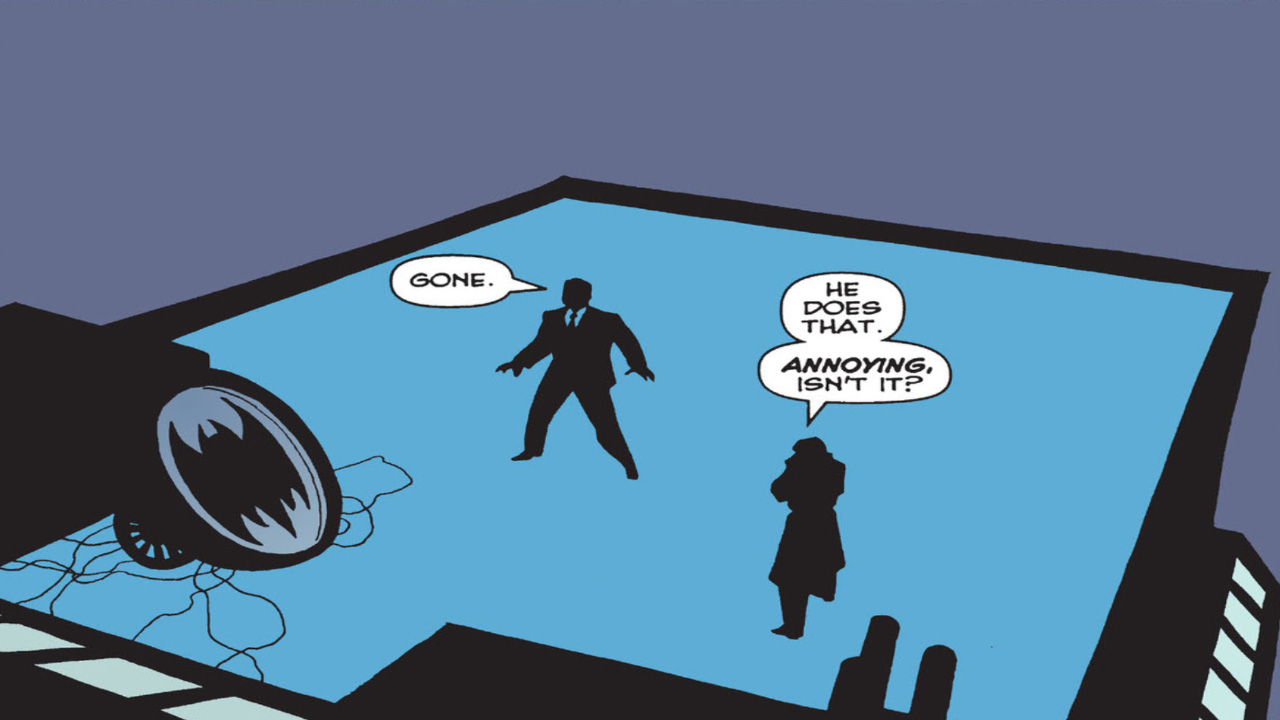 “When did Batman start disappearing on Jim Gordon mid-sentence?”

There are two popular answers to this question, BatJamags. The difference is that one answer is correct, and the other is incorrect. There’s a somewhat popular answer to this question that the first time Batman pulls this stunt is in 1973’s Swamp Thing #7, the iconic issue by Len Wein and Bernie Wrightson where Batman meets Swamp Thing for the first time. 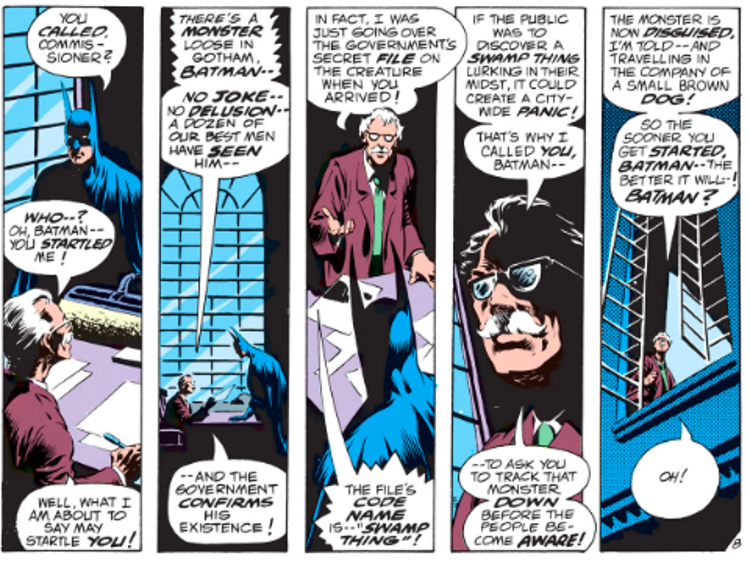 And considering that Len Wein went on to become a prominent editor and Batman writer at DC Comics over the next few decades, that may well be where the concept was popularized. But the actual first documented case of Batman ghosting Gordon occurred in a much lesser known issue a year earlier, in 1972’s Detective Comics #424: 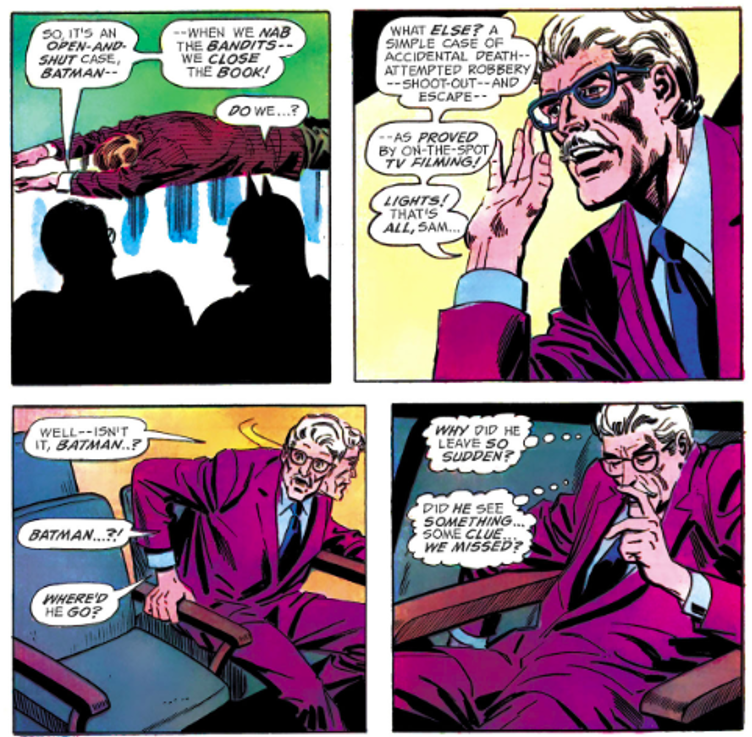 Detective Comics #424 is notable for a back-up story featuring “Batgirl’s Last Case,” where Barbara retired her cowl as Batgirl. But apart from that, this issue was edited by Julius Schwartz, a frequent collaborator of Wein’s — so it’s not unimaginable that this is where the legendary Swamp Thing co-creator picked up the idea, and wrote it into Batman history.

WHEN I GROW UP TO BE A (SUPER)MAN 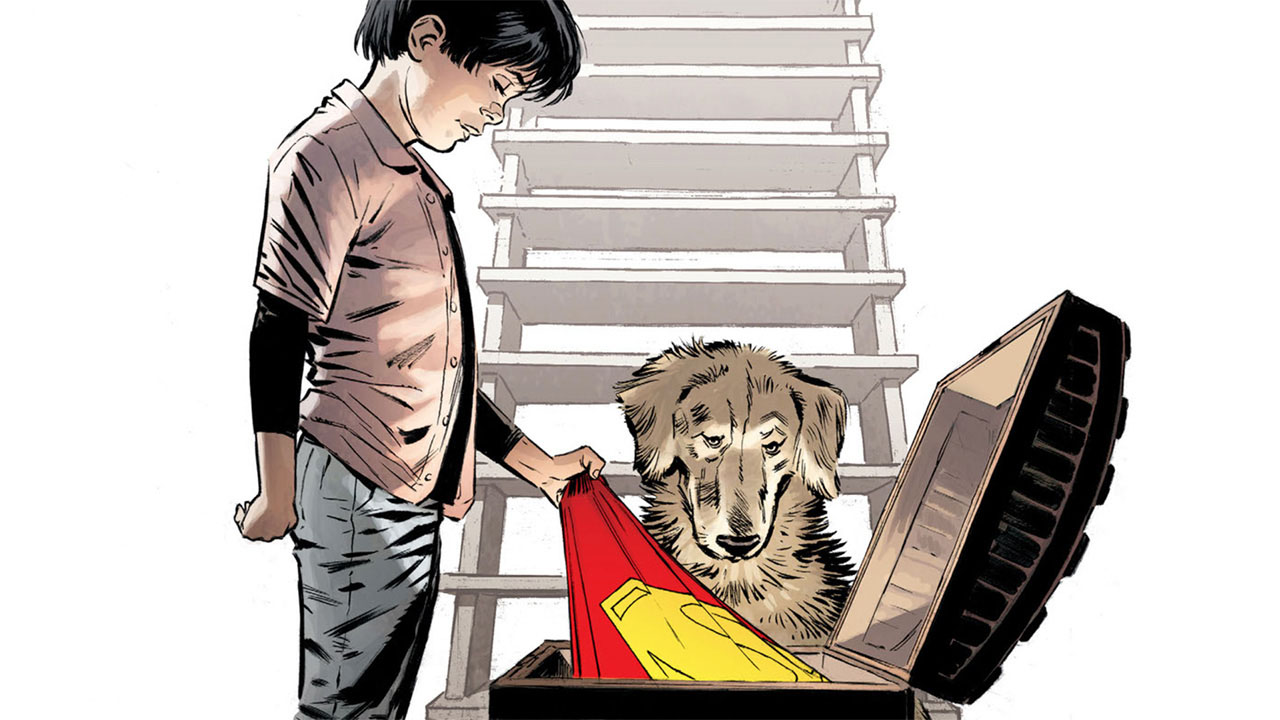 “I really like the Super Sons and I wanted a bit more background on Jon. Is there an actual series where Jon Kent is growing up? A time when he is younger, before Rebirth. Is it like a New 52 or Pre-Flashpoint run?”

Jon Kent’s background before Peter Tomasi’s Rebirth-era runs on Superman, Super Sons, and Adventures of the Super-Sons is quite brief, and yet somewhat complicated, so please bear with me as I attempt to untangle it just a bit.

Jon’s story begins in 2015’s Convergence: Superman, a tie-in to the multiverse-spanning Convergence event. In this story, we learn that the Superman and Lois Lane who existed before the reality alteration of Flashpoint still exist in a bottled Metropolis kept in a collection of cities from a wide spectrum of realities, which the collector Telos- a multiversal being born from Brainiac- pits against one another after a year of isolation.

During that year, we learn that Lois has become pregnant with Clark’s child (a conception perhaps made easier by the fact that Superman had lost access to his powers during their captivity). In the Convergence competition, Superman meets with the Batman of Flashpoint, Thomas Wayne — who delivers the baby himself when Lois goes into labor.

After the “Convergence,” Clark, Lois, and their baby Jon were displaced into the Post-Flashpoint DC Universe, 10 years before the present day. Dan Jurgens’ limited series Superman: Lois & Clark explores the life of this second, older Superman and Lois in a world unfamiliar to them as Jon grows up in their influence. After the launch of DC DC Universe Rebirth, Peter Tomasi’s Superman and Jurgens’ Action Comics run each pick up where this table-setting miniseries leaves off.

As for what happens with the Two Supermen and Loises? That may be a topic for a different article. But suffice to say that the “Superman Reborn” storyline was written to uncomplicate things, consolidating their two histories into one.

“I saw a reference to Mercy Graves the other day and I suddenly remembered that Luthor pre-COIE had two recurring henchmen who appeared to be twins: Plato and Pluto. In how many issues of Superman Family comics did they appear? This was around the time he had the powersuit…”

Plato and Pluto Statler occupy a liminal space in Superman’s history, appearing exclusively at the tail end of the Bronze Age of DC Comics. After the one-two punch to Superman continuity of Crisis on Infinite Earths and The Man of Steel, many of Superman’s lesser Pre-Crisis supporting cast was cleared from the decks — the Statlers among them.

Plato and Pluto were first introduced in 1983’s Superman #385, as two of a number of notorious criminals broken out of prison to form Luthor’s latest crew. This first appearance reveals that they are not only twins, as you surmised, but originally conjoined  twins, with a reputation for planning perfect crimes together. (Though apparently not always perfect… otherwise they wouldn’t be in prison.)

Between 1983 and 1986, the Statler twins made only six appearances in Superman comics: each of them written by the characters’ original creator, Cary Bates. The complete misadventures of Plato and Pluto can be found in Superman #385, #401, #410, #412, #413, and finally in 1986’s Superman Annual #12, mere months before the Crisis would erase them from history. But who knows? All it takes is one writer’s whim to bring a long forgotten character back from an eternity in limbo. I hear Two-Face is hiring. 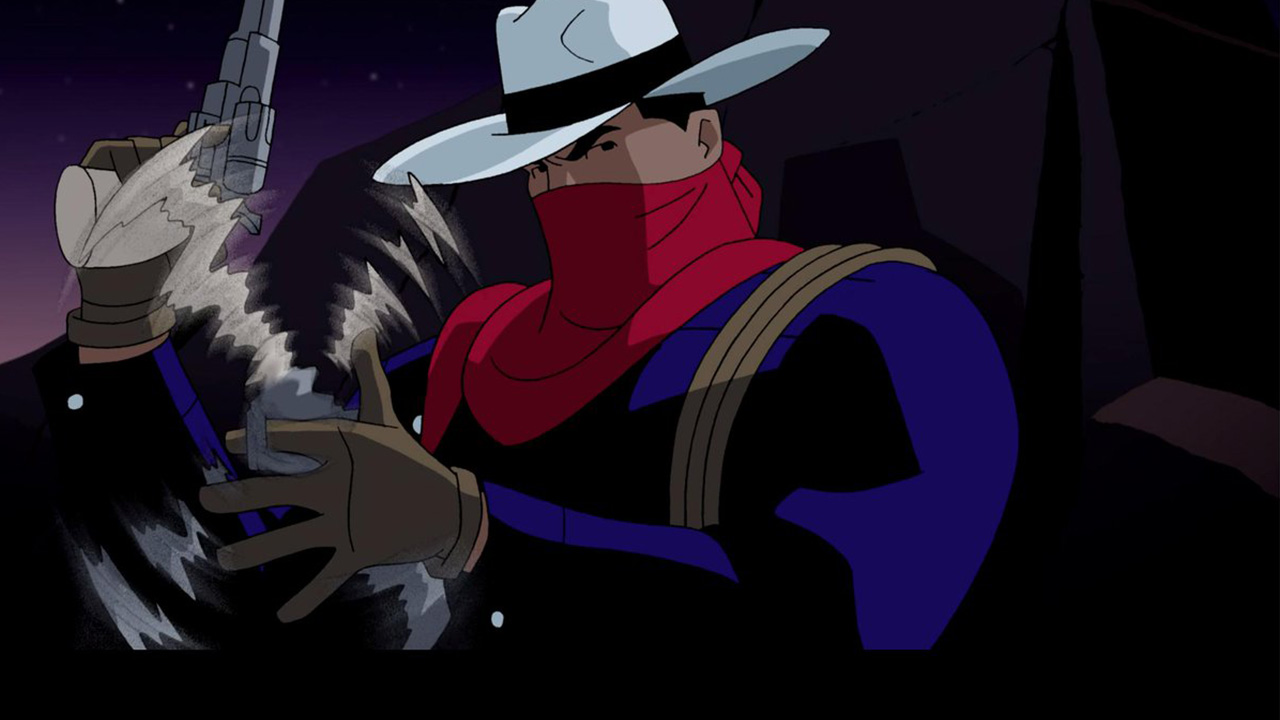 “Whatever happened to The original Vigilante, Greg Sanders?”

I can’t blame you for your confusion, Robotman. Greg Sanders (or Saunders, as it’s alternately spelled) played a small but memorable role in Justice League Unlimited, developing an unlikely chemistry with fellow man-out-of-time Shining Knight. But in the comics, Saunders traveled from his Golden Age beginnings to the modern age the old fashioned way: by living one day at a time.

Debuting in 1941’s Action Comics #242, Greg Sanders was a humble country singer who became the Vigilante to avenge the death of his father. Along the way he picked up a sidekick, the somewhat problematic “Stuff, the Chinatown Kid,” and even joined JSA contemporaries the “Seven Soldiers of Victory” (alongside the Shining Knight).

But Greg’s heyday was confined to the ‘40s in the DC timeline. Eventually, Greg aged out of superheroics, got married, opened a restaurant chain, and ran a dude ranch in Mesa City. When he was feeling jumpy, he’d sneak out of retirement to avenge the death of his former sidekick or help out a modern western hero like the ‘90s El Diablo.

In 2005’s Seven Soldiers, Vigilante apparently rode for the last time to unite a new incarnation of the Seven Soldiers of Victory in order to battle The Sheeda, a monstrous time-traveling race from the future. But it was 2008’s Superman's Pal, Jimmy Olsen which revealed his final fate: as the sheriff of a small Mexican bordertown called Warpath.

I PUT A SPELL ON YOU 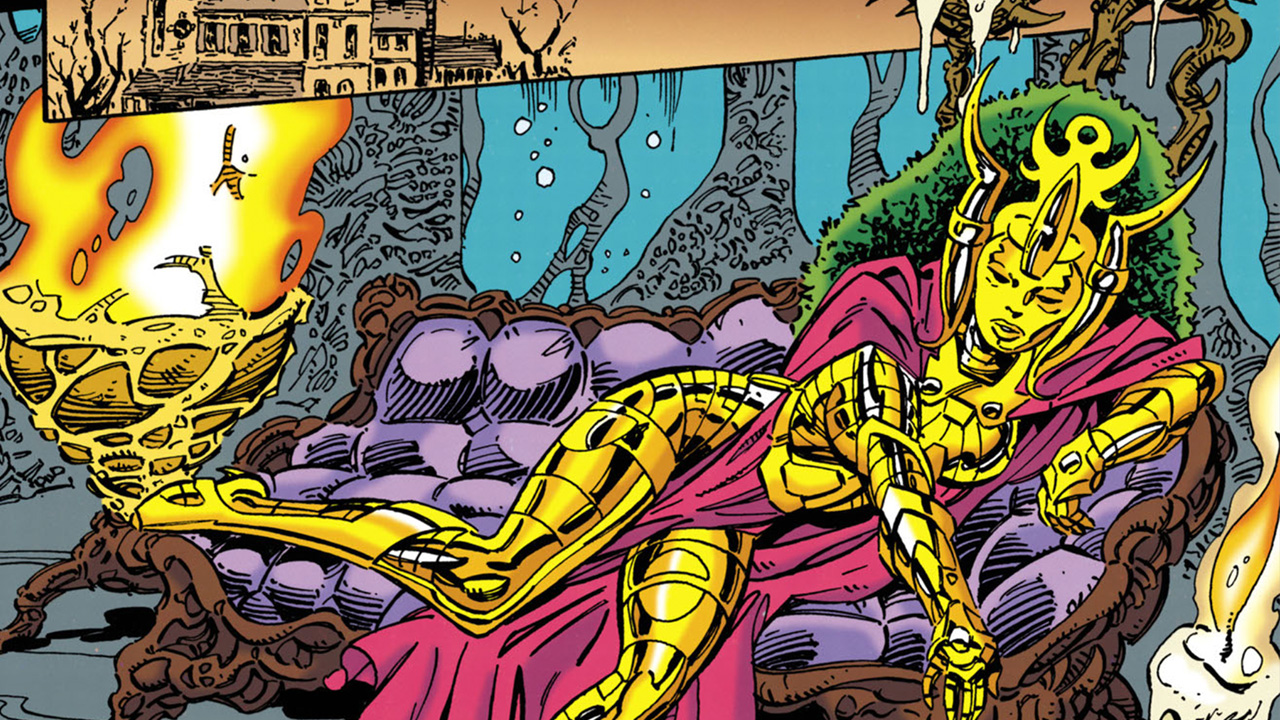 “I’ve looked this up multiple times and it’s always different. Morgaine le Fey is spelled that way and ‘le Fay.’ I know one is from Arthurian legend, like DC’s but separate. Yet, I just checked again as I was posting the other day and it said the DC version is ‘le Fay.’ I’m reading Justice League #18 and Luthor refers to her as ‘le Fey.’ I just read a comic the other day and it said le ‘Fay.’ Is it a Ra’s [al Ghul] pronunciation type deal? Or is there a definitive correct spelling?”

This is… a pretty fair question, capo-mage. Throughout DC history, I’ve seen the arch-enemy of King Arthur’s name spelled in a greater variety of ways than there are contradicting accounts of King Arthur himself. So to resolve this question, I decided to take the stupidest, most laborious tactic possible: I went through every appearance of the character in the entirety of DC history, from 1946 to 2019, and kept a record of how it was spelled each time. Here below are my results.

WHO’S WHO: THE DEFINITIVE DIRECTORY OF THE DC UNIVERSE #16 (1986) — Morgaine le Fay/Morgaine le Fey [spelled differently on the cover and interior]

What can we learn from this data? Here’s what I’ve gleaned: when it comes to spelling the name of this enemy of Arthur and Etrigan, many writers have a tendency to wing it. Otherwise, there are two dominating schools of thought: in stories which allude back to the sorceress in her original Arthurian legend, the spelling generally adhered to “le Fay.” But in stories which call upon her DC Universe roots in Jack Kirby’s The Demon, writers tend to draw on Kirby’s original preferred spelling: “Morgaine le Fey.” As for me? As far as I’m concerned, while many valid spelling variants for this legendary character exist both inside and outside of the DC Universe, there’s no arguing with The King. “Morgaine le Fey” it is.

And that’s our case load for this week! Remember to stop by my office at any time to submit whatever mysteries vex you. For satisfaction, you need only ASK… THE QUESTION.