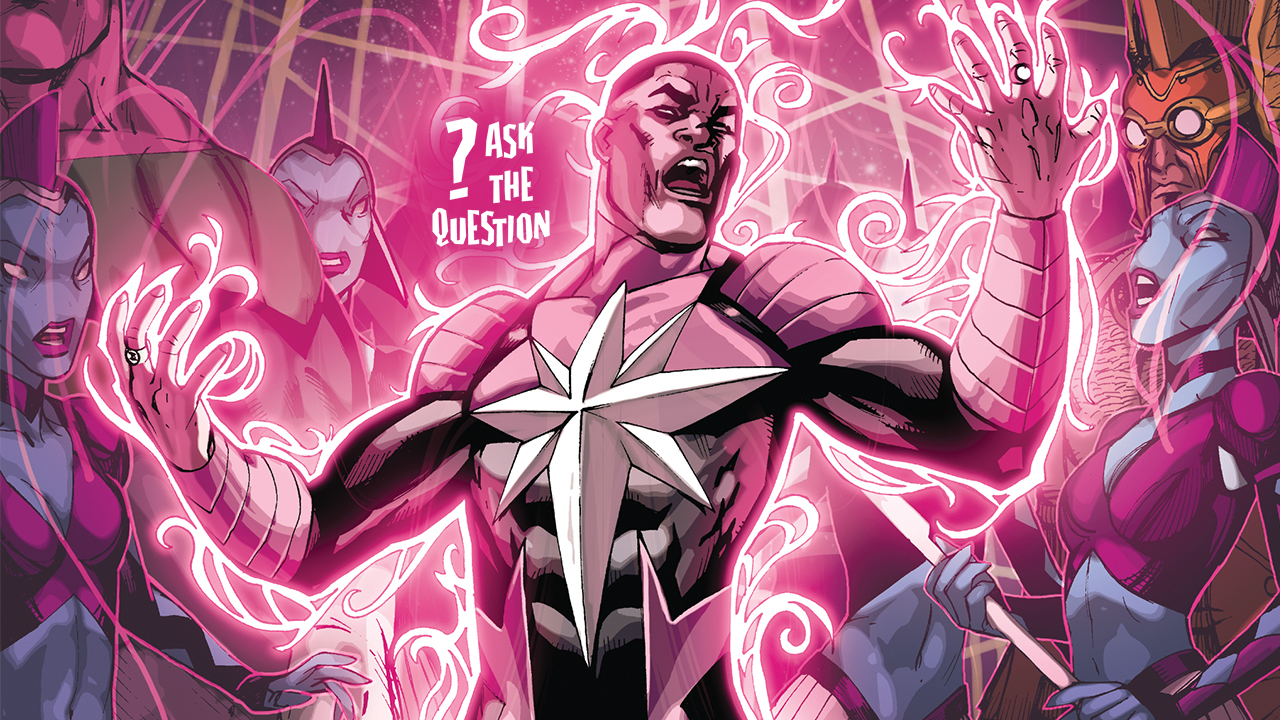 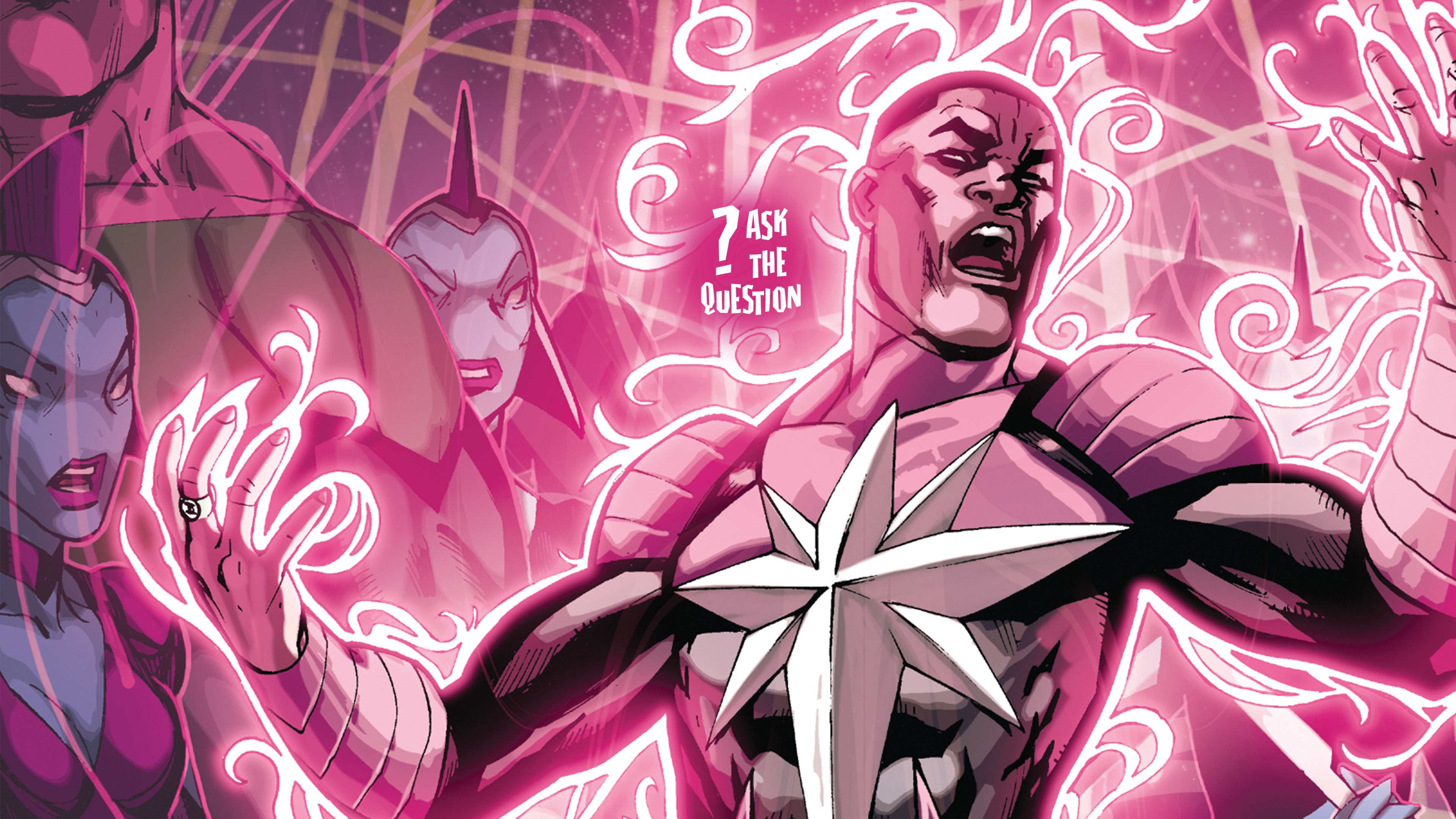 Hello, I’m Alex Jaffe. Some of you in our Community already know me as @HubCityQuestion. I’m back once again to take on any question you have about the DC Universe, no matter how granular, obscure, or strange, and present you with an answer. At any time, you may present your inquiries by posing them to me in this thread in the Community. And every week, I will be here to address the most intriguing of these cases to the best of my ability. All YOU need to do... is ask The Question.

Your Princess Is in Another Castle 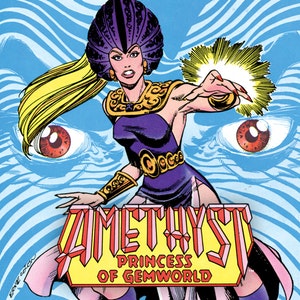 “Who are all of the DC Princesses? Off the top of my head I know DC has Princess Diana of Themyscira, Starfire, and Princess Amethyst. Are there others? Who are the others?”

From Atlantis to Apokolips, the DC Universe is a place that’s rife with royalty. Wonder Woman, Starfire, and Amethyst are a great start, to be sure. In truth, queens exist in far greater numbers than princesses in our comic history. But if you want to collect all the DC Princesses, here are a few more names which should be on your list.

BATTLEAX — Alien princess of the Nekromnians, and enemy of The Outsiders.

BLEEZ — The Lady Bleez was once the spoiled crown princess of the planet Havania. But she was forced to grow up quickly when she and her people were captured, tortured, and slain by the Sinestro Corps. Upon her escape, Bleez had lost everything but her rage… and became the right hand woman to Atrocitus of the Red Lanterns.

CHAY-ARA — Hawkman and Hawkgirl have had many origins over the years, but one which has stood the test of time is the tale of Prince Khufu and Princess Chay-Ara. For thousands of years, Princess Chay-Ara has been fated to reincarnate across time and space, only to be reunited with her love once more in each life.

DOCTOR POISON — Golden Age Wonder Woman villain, and secondary antagonist of the 2017 ‘Wonder Woman’ film. Though no longer included as part of her character in modern continuity, her true identity was once Princess Maru, of the royal family of Japan.

DRUSILLA — An exclusive character to the 70’s ‘Wonder Woman’ TV series, Drusilla was presented as the second daughter of Hippolyta, and kid sister to Wonder Woman (at a mere 700 years old).

EMERALD I, II, III — Lady Emerald, ruler of the Emerald Kingdom of Gemworld, was mother to three Princess Emeralds. Though the eldest was sacrificed to Dark Opal, the younger two became stalwart allies to Princess Amethyst.

FERN — Princess Fern was the daughter of Lord Quark and Lady Volt, the royal family of Earth-Six. Unfortunately, her ability to control plant life wasn’t enough to keep her from being annihilated by the Anti-Monitor.

GEODE — Denise Howard met Geo-Force, the exiled prince of Markovia, at Gotham University. Eventually, the two hit it off and married each other, making Denise a new Markovian princess… at least, for a time. Eventually, the marriage was annulled, and in a desperate move, Denise attempts the same experiment on herself which granted her ex-husband his geokinetic abilities. Suffice to say she does not achieve her desired results.

IOLANDE — Not just the princess of the planet Betrassus, but also Green Lantern of Sector 1417. Her name sounds like a waterfall.

JULIE MADISON — Julie Madison is notable not only as a doubly crowned princess, but the very first romantic interest of Batman. First appearing in ‘Detective Comics’ #31, the wealthy socialite eventually grew tired of the flaky Bruce Wayne and got herself married to the princes of Moldachia and Tybern, successively, taking on the name “Princess Portia.”

MISTY KILGORE — Princess of the Sheeda, a powerful race which dominates the Earth one billion years in the future. In the present, she spent some time as Zatanna’s apprentice.

LAETHWEN — Tiny alien princess of the tiny kingdom of Morlaid, and departed wife of Ray Palmer, AKA The Atom.

LISETH VOK — Not just the princess of Ungara (homeworld of Green Lantern Abin Sur), but an interstellar pop star as well!

NEILA — Exclusive to ‘The Adventures of Superboy,’ Neila was a powerful alien princess with an interest in the Boy of Steel.

SENSOR GIRL — Princess of the wealthy planet of Orando, and illusion-casting member of the Legion of Super-Heroes. Also known as “Princess Projectra.”

SHAO-LA — A spacefaring, thrill-seeking princess who turned down her throne for a life of crime.

SHYERA THAL — The New 52 incarnation of Hawkwoman, and princess of the planet Thanagar.

TAIA — Ancient princess of Thebes, and wife of Ibis the Invincible.

TERRA — Tara Markov, sister to Geo-Force and princess of Markovia. Most famous for betraying the Teen Titans, breaking Beast Boy’s heart, and shacking up with Deathstroke.

TOPAZ — Princess of the Topaz Kingdom, Princess Topaz was in league with Lady Sapphire and Dark Opal to seize control of Gemworld.

TRESKA — Princess in exile of a race exiled from their homeworld by the invading Thanagarians. Tried to find refuge on Earth, but was turned away.

A Star Sapphire is Born 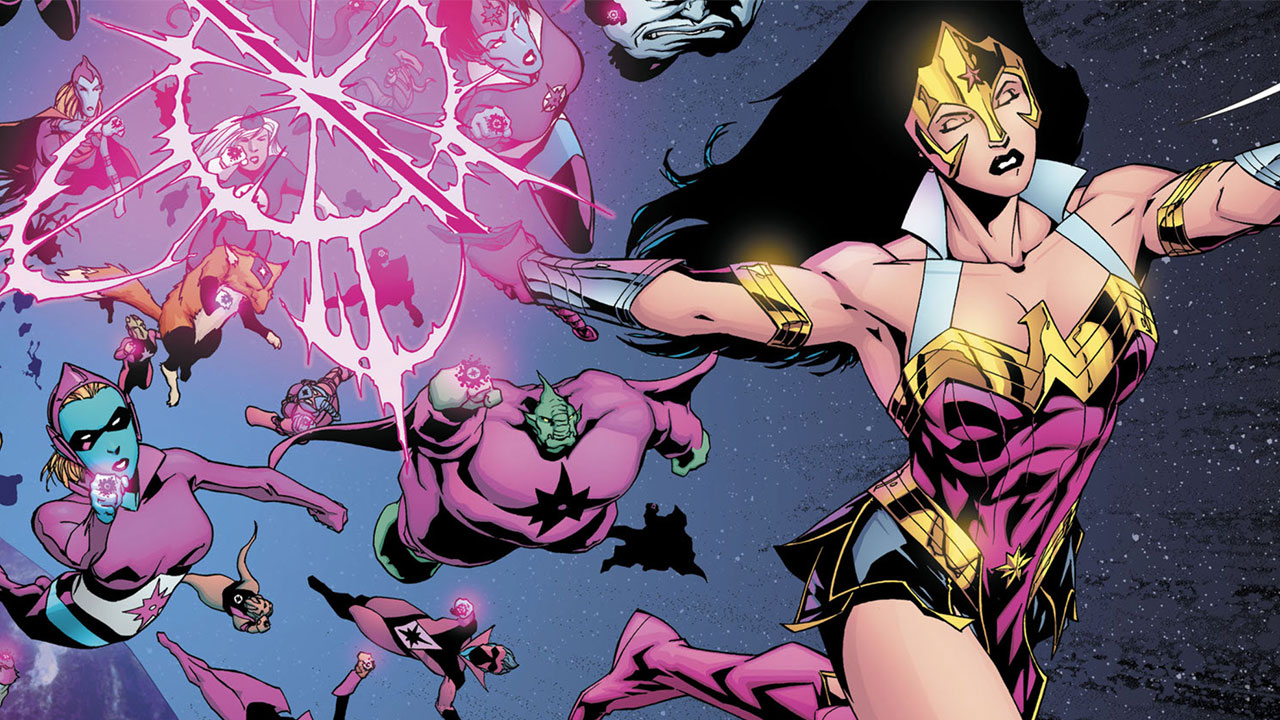 “I’ll admit to not being fully caught up on all the GL continuity, but I’ve yet to see a male 'Sapphire.' Has one happened? If so, who and when?”

It’s not common for a male to find recruitment in the Star Sapphires, but it isn’t unheard of. In fact, one of the traits which makes a Star Sapphire ring unique is the ability to convert members of OTHER Lantern Corps into Star Sapphires (though the change is rarely permanent).

Abraham Pointe, a Las Vegas paparazzo with an unhealthy obsession over a casino staff member. While he was never properly inducted into the Corps, he did become a host for Predator, the Entity of Love, which gives the Corps its power.

During "Blackest Night," Superboy-Prime becomes a Star Sapphire by drawing upon his love for Laurie Lemmon as he fought the Black Lanterns on his homeworld.

During ‘Green Lantern: New Guardians,’ Kyle Rayner had to master every ring on the emotional spectrum, including Sapphire, before he could become the White Lantern.

John Stewart, too, uses a Star Sapphire ring, during the 2014 “Godhead” storyline, as a last resort means of teleporting his team out of trouble.

True enough, these are all one-off exceptions and temporary recruitments. But one of the themes of writer James Robinson’s Wonder Woman story arc in 2018 addressed the very issue of who gets to be a Star Sapphire. For the first time, some males are even seen among their number, but they don’t play a significant role. Nevertheless, the ball has been set in motion for the next Star Sapphire story. We’ll just have to see what comes of it. 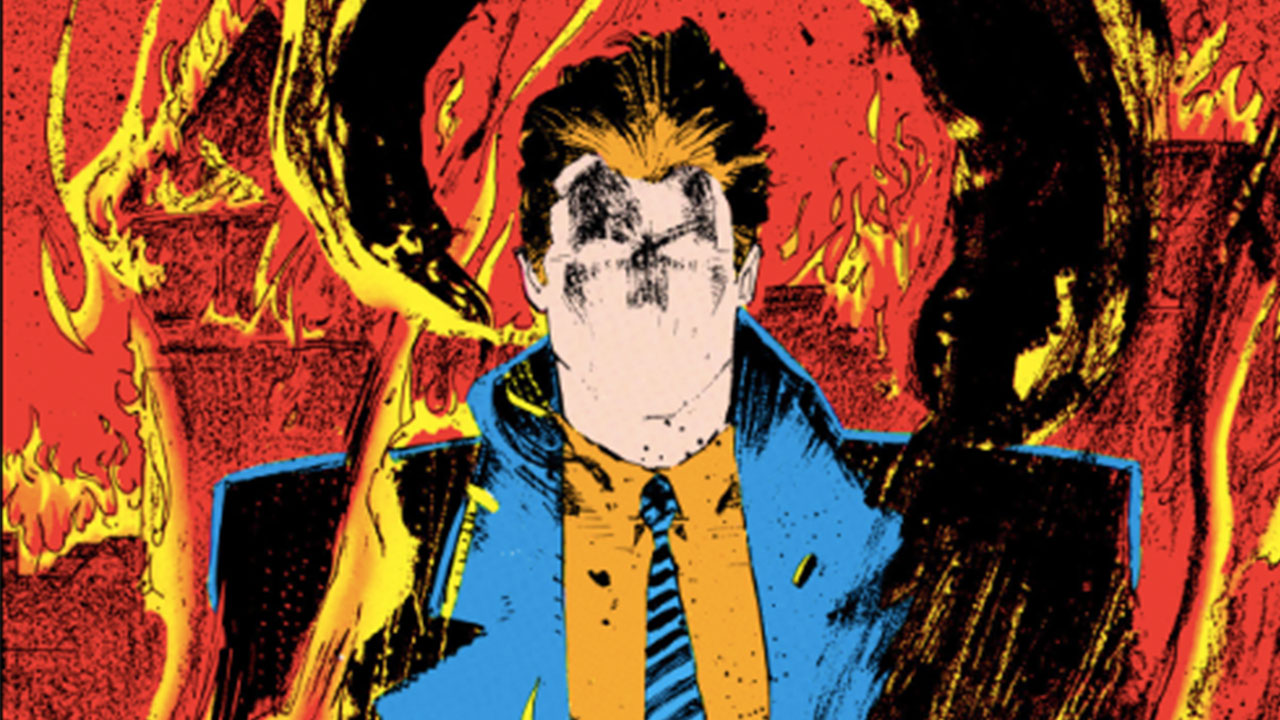 “Here's my question--why The Question? I can't imagine you only enjoy him for convenient wordplay and his sharp suit.”

Well. Not ONLY because of that. I like The Question because in Steve Ditko’s original stories and those he inspired, he never compromises once he sees the right course of action. He fights to uncover the hard beauty of truth in a world where lies are far more comfortable.

I like The Question because in writer writer Dennis O’Neil’s '80s run, he’s allowed to evolve. To see there are some things about the person he once was that he’s not too proud of, but that we are all capable of becoming something new.

I like The Question because in writer Dwayne McDuffie’s ‘Justice League Unlimited,’ there was this skulking, bizarre faceless man who didn’t command the respect or awe that Batman did, but who was equally relentless in his pursuit of a mystery, if not more so. Because he was willing to do what others wouldn’t even dare consider, if only to avoid past- or future- mistakes.

I like The Question because, like many Ditko characters, it could be ANYONE under that mask. The Question shows us that all you need to do to be a hero is not be complacent. Don’t accept cruelty, injustice, and lies as the way the world works. Sometimes, all that’s needed to be a hero is to summon enough courage to Ask...The Question.