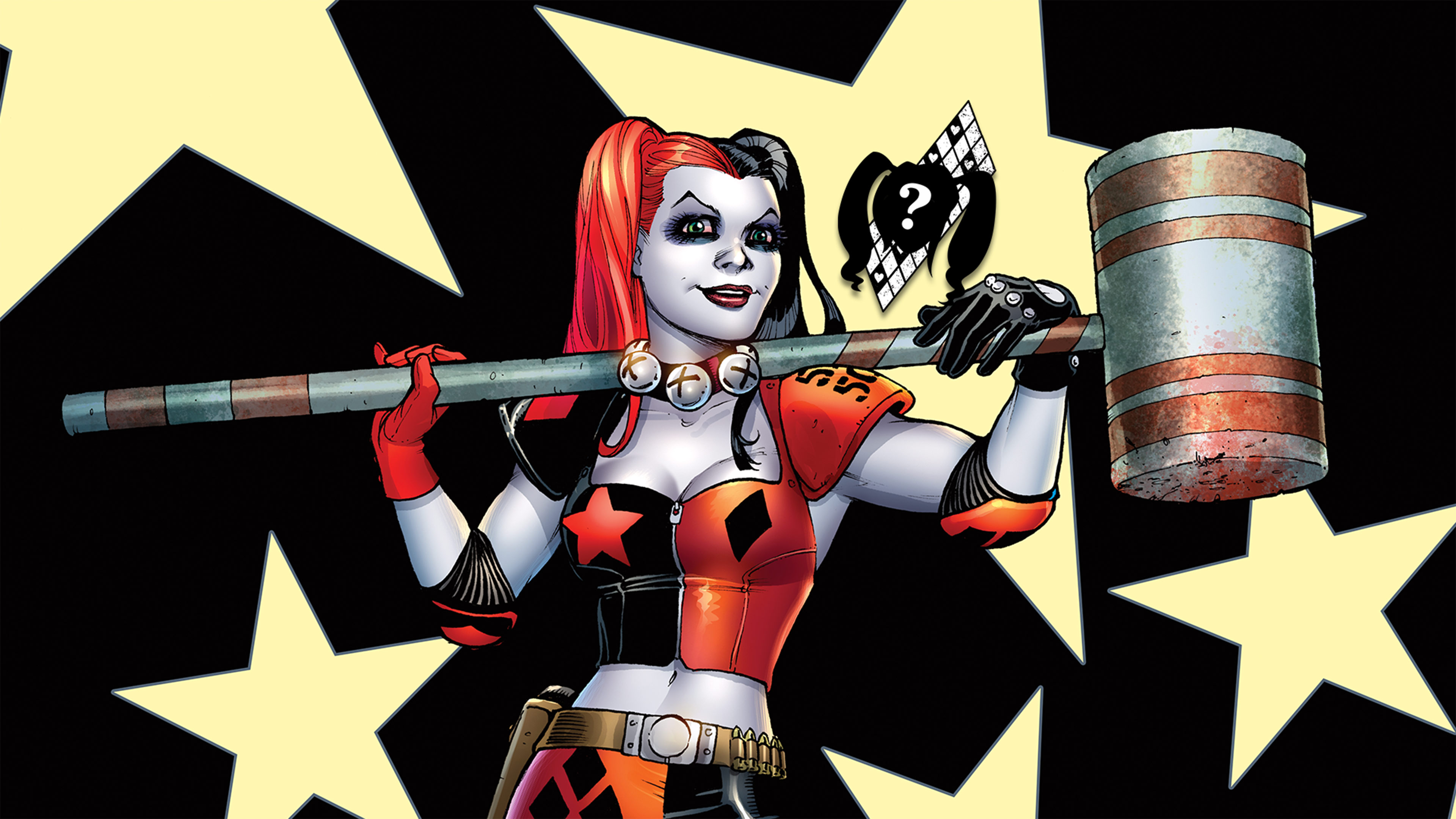 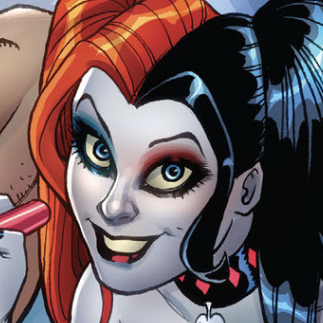 Hey there, puddins! Ever wonder how ta get that crush a’yers ta notice ya? Or how ta get yer folks off yer back? Or how ta make the best breakfast sammich ever?! Harley Quinn here to give you all the AMAZIN’ advice y’been searchin’ for all yer dumbass lives – with the help of my good pals (and the writers of my bestselling comic book) Amanda Conner and Jimmy Palmiotti! So go ahead an’ spill all a’ yer troubles in my ongoing Community thread, and maybe I’ll answer YOUR question next in this weekly column. Now let’s see what folks are askin’ this week…

Well, they both leave the proper impression in the skull of whoever’s in my path, so honestly, whatever one can be packed easiest when I’m out an’ about. I give them equal time, but with the bat, I do add some barbed wire and rusty nails to give it a bit of flair and impact penetration. Why swing without having penetration, right? Either way, like Power Girl and Ivy, I can’t choose which is better.

POWER TO THE HARLEY

Dr. Death, I’ve spent many a time-consuming night thinkin’ about this very question! On one hand, it’d be awesome ta’ fly anywhere I like and throw stuff down at people like a seagull with a bad case of diarrhea, but on the other hand I’d love ta’ be invisible so I can sneak around an’ mess with everyone. You know, pants the Joker when he’s listing his demands on TV, or to follow Batman home, rearrange the Batcave and steal his Batarang’s ta’ put them on eBay. But the more I thought about this very question, I think what would most help me an’ those around me would be to have the power to read minds. It would help with my professional career of helping others, and at the same time get the reveal on what others really think about me and my fabulous patootie. So, mind reading it is. How about you guys? Tell me your super power choices and why! 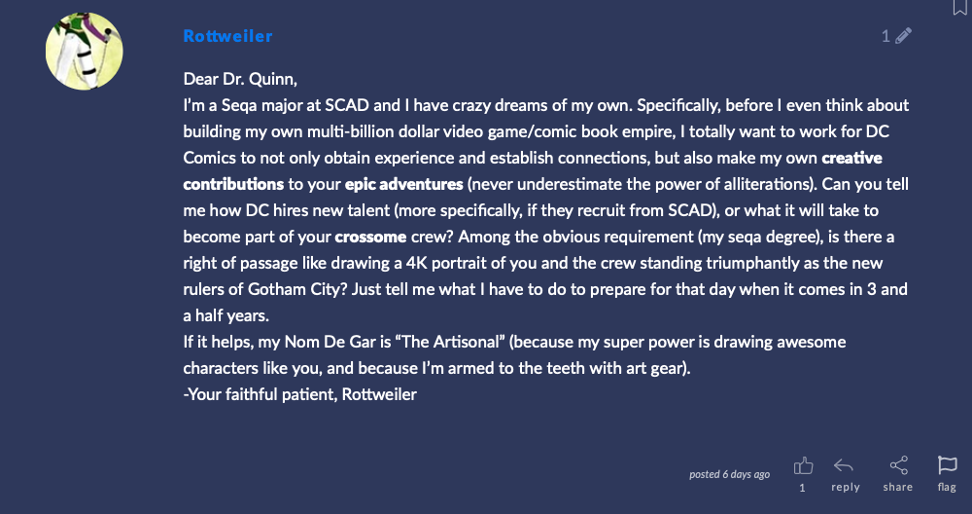 Well, Rottweiler, I’m pretty sure DC recruits from anywhere, as long as the person they are hiring has amazing skills. The trick is being seen!  Let me tell you a story about one of my artists, John Timms. Those story hacks Jimmy Palmiotti and Amanda Conner did a signing in a comic shop in Costa Rica a few years back and a guy online showed them his portfolio and they were so impressed with his work that within a month he was not only working on DC’s greatest title, but he got to draw me and my bodacious bod on a monthly basis! What I’m saying is get yer’ work out there, in school, on the internet, and at a convention near you and show it off! This is the power of the internet and social media. You never know who’ll be looking!

Seriously? That’s like asking me which I love better, French fries or pizza. Dan, this is one of those times that choosing is an impossibility. I love both of ‘em and would do anything for them. You know that saying where they tell you even having one great friend in a lifetime is a gift? Well, I got two and I consider myself the luckiest human being on the planet. Can I just say both and we can move on?

YOU CAN GO YOUR OWN WAY

I want you to be happy again too, and sad you aren’t that right now. That sucks balls. I have learned the hard way that honesty is always the best policy. It’s great to have empathy and understanding and to be aware of others feelings, but in the end, it is a disservice to you both to be in a relationship where ya’ two feel differently about each other. What I would do is have a serious conversation an’ be authentic and open with your feelings. It’s not always an easy thing to do, trust me…but the big picture is it will be for best and hopefully open up the door for better and healthier futures for you both.

My younger brothers used to do that all the time, so I just started beating them with a whiffle ball bat each time they came in. I am not suggesting this in your case because, well, this sounds like a calm conversation and some boundaries are needed. Ya’ mom needs to understand that although she does own the house, you’re an adult now and in order for you both to live in harmony, there needs to be some discussion about boundaries for you both. Maybe the best thing to do is bring home some dinner [ for a change] and maybe ask your mother if there is anything you’re doing that bothers her, and a few hours later when she’s done listing them, bring up the problem of the barging in and see how it goes from there. In order for her to treat you like an adult, you both have to start acting like one. If that doesn’t work, get a second job and move out to the country where it’s cheaper to live. At 21 I already had a rat-infested apartment in Gotham. You can too.

Easiest question of the week. Amsterdam. That’s where I get mine from. This guy named Louie hooks me up with the best. It glows in the dark going in an’ comin’ out, that’s how good it is. As far as hearing voices, maybe it’s time to see someone about that. I’m sitting here wondering exactly what a teddy bear vampire's voice would sound like, so you got me thinking…

PLAYERS ONLY LOVE YOU WHEN THEY'RE PLAYING

Crushes can be gotten over. For me, I only want to be with someone that really wants to be with me, so right out of the gate, I say forget this guy. If he really wanted you, he would leave the other woman and do his thing, but obviously, you’re dealing with someone that’s trying to have his cake and eat it too, which means you can’t have both things. Just keep calm, have integrity and start looking elsewhere. There are plenty of fish in the sea, just ask Aquaman. Actually, don’t ask him. That guy’s advice is fishy.

Last I checked, we only have one life ta’ live, so get your ass to school an’ go after what you want. learning an invaluable profession is something that will benefit you for a lifetime and in the end, if it’s not for you…writing will be there. Try not to have regrets in this life. I have a few as you already know and I’m still dealin’ with them.

The best revenge for you is your own happiness. Treat yourself well, fall in love with someone spectacular that loves you back till the end of time and circle the globe with travel and adventures. Trust me, you’ll be so busy you won’t care what happened to that guy. Revenge is a waste of time since in the end it shows the other person you care too much to let things go. The only power people have over you is your reaction to them. Write that and put it up on the fridge next to those photos of you standing next to complete strangers flashing yer body parts. Sorry,… lost focus there for a second.

I hope you saw Birds of Prey at least 40 times in the theater like I did. My old record was 22 for Suicide Squad. I just look THAT good on the big screen, ya know? As far as my future, my next appearance besides the self-titled DC Universe animated series is… Suicide Squad 2! Coming in 2021! After that, you can bet your cold cash I will be appearing in at least one film every other year till you’re are old and decrepit, livin’ in a senior home, skinny dippin’ an’ eating jello with Sy Borgman.

Easy, when you are so happy you can’t imagine doing anything else with your life. Sadly, it’s not always clear which path to take, that’s why I am here to help out each week and guide you. I am still looking for mine…it’s always been a toss-up between being a criminal mastermind and being a spandex flexin’ superhero.

Note: The opinions expressed by Harley Quinn are published for entertainment purposes only, and are not intended as a substitute for professional advice. Please consult a qualified professional for your specific needs or concerns.